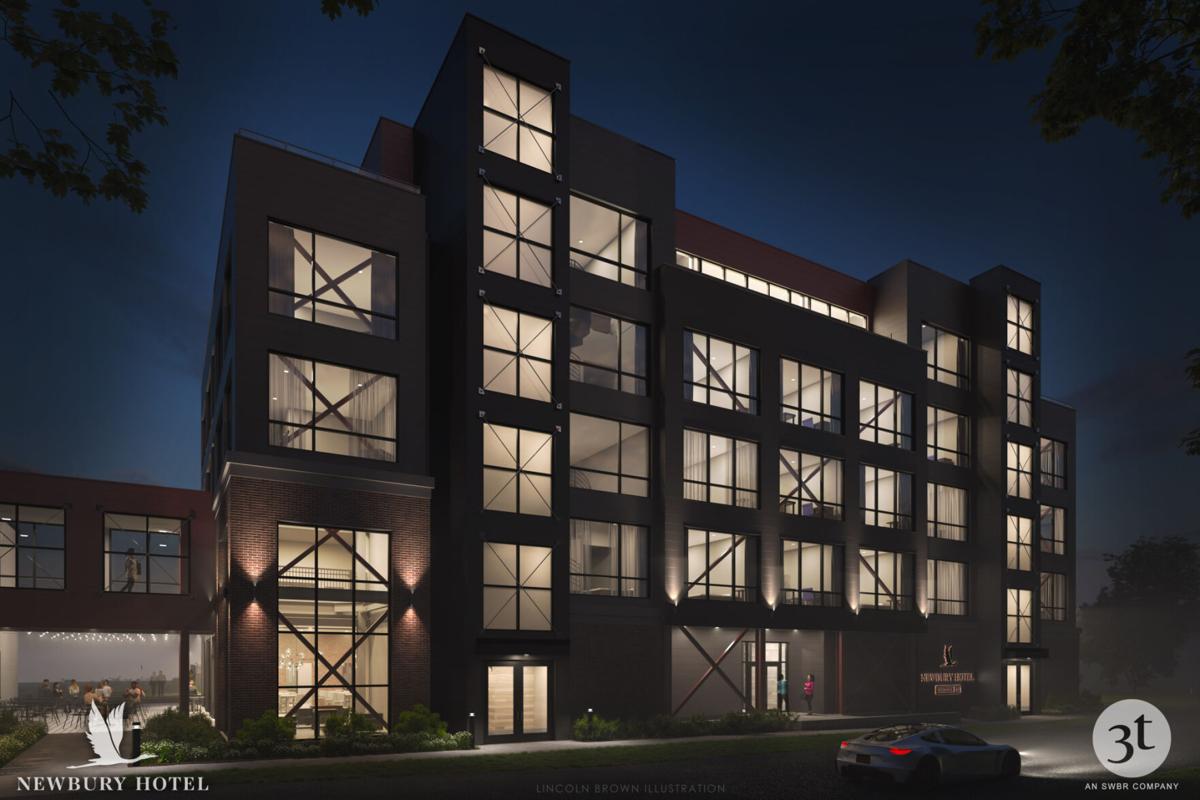 An artist’s rendering of the Newbury Hotel. Contributed photo 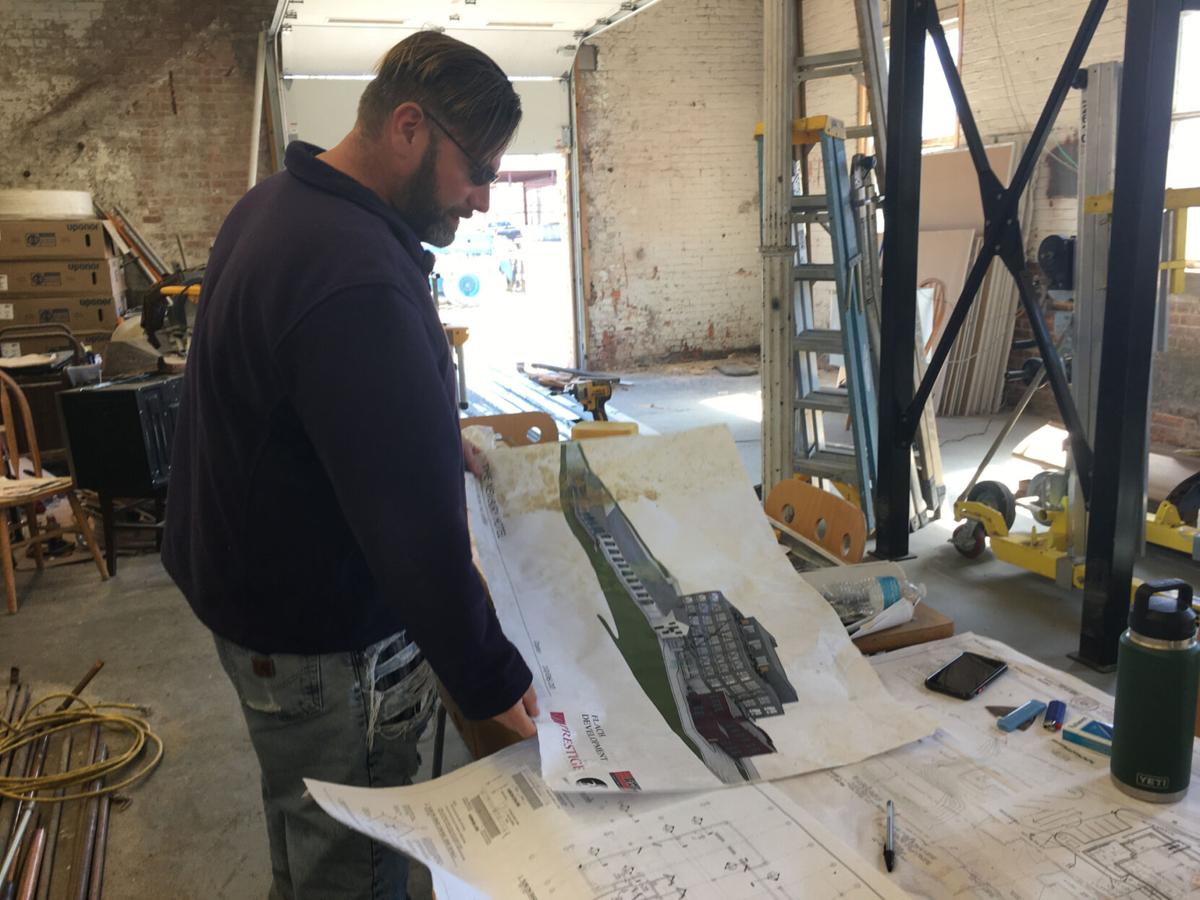 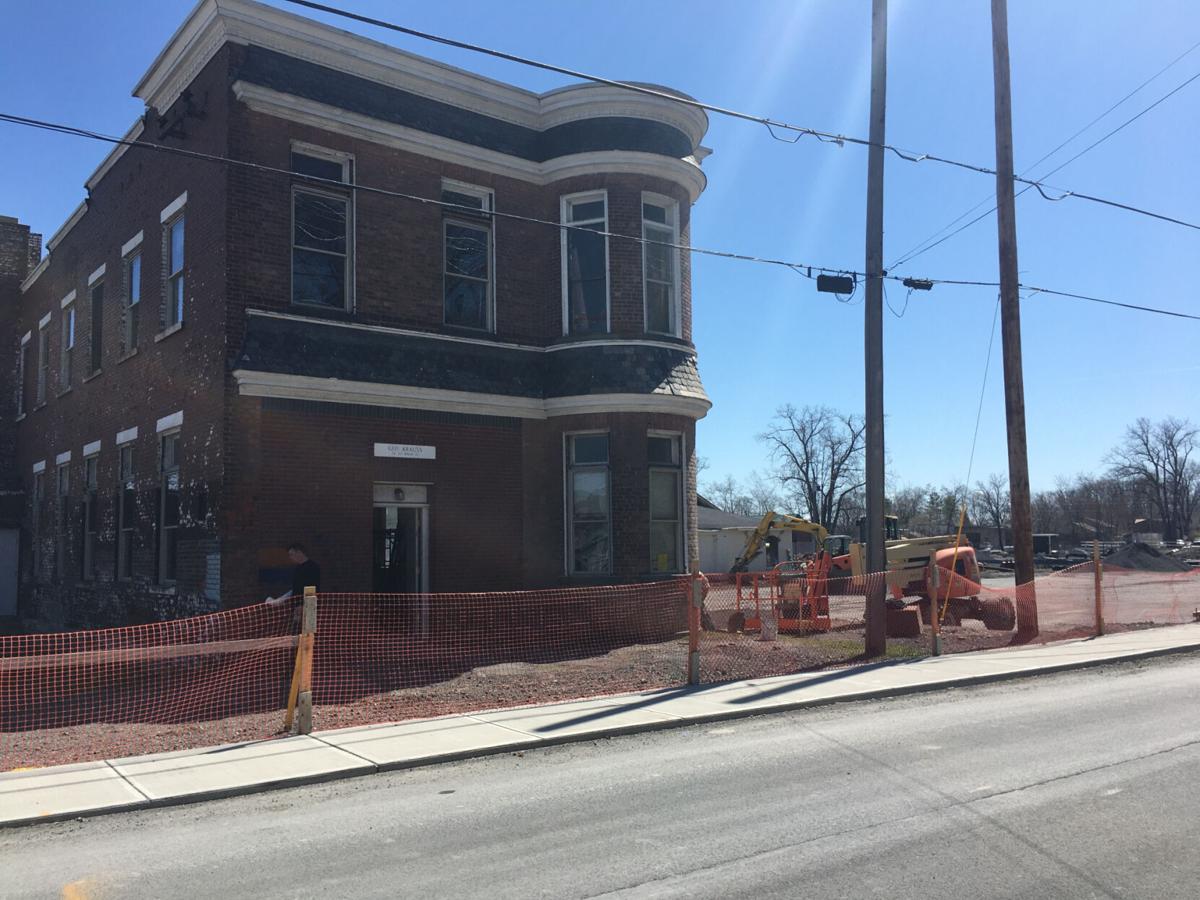 The existing building will be improved and additions will be built to create the Newbury Hotel on South River Street in downtown Coxsackie. Melanie Lekocevic/Columbia-Greene Media 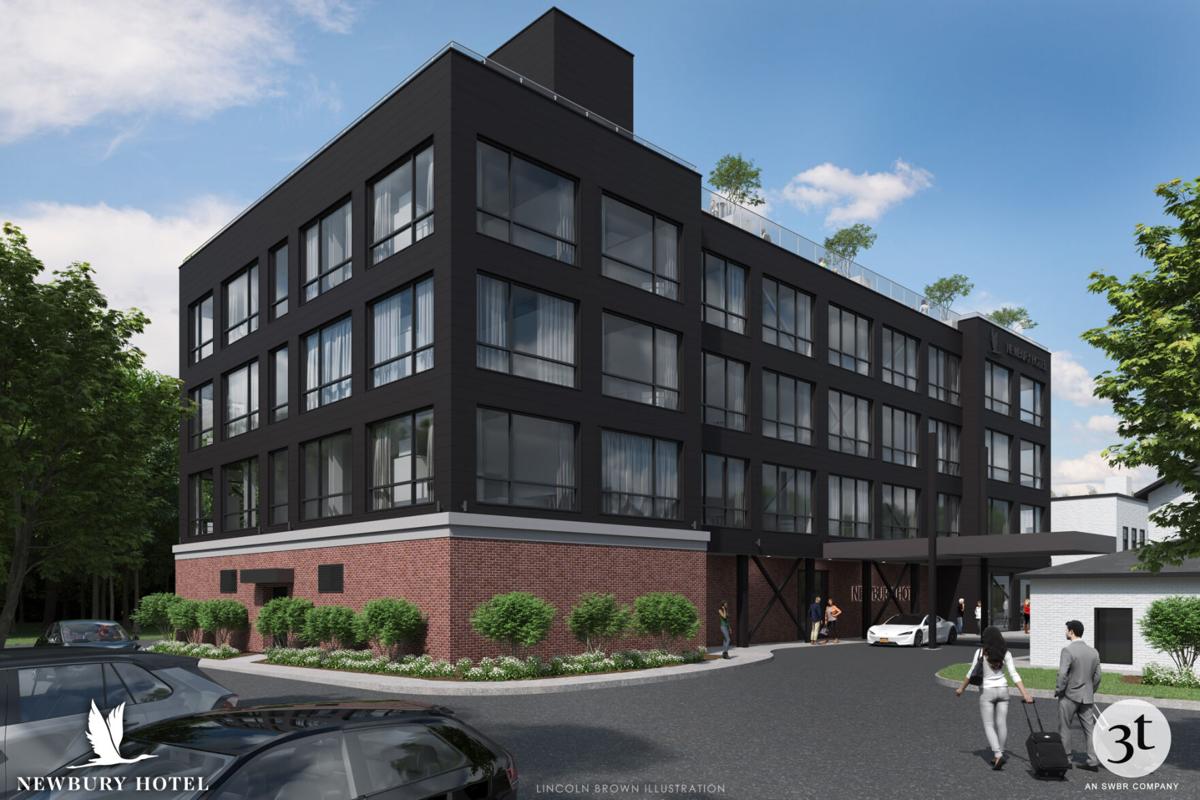 An artist’s rendering of the Newbury Hotel, which is being constructed on South River Street in downtown Coxsackie. Contributed photo 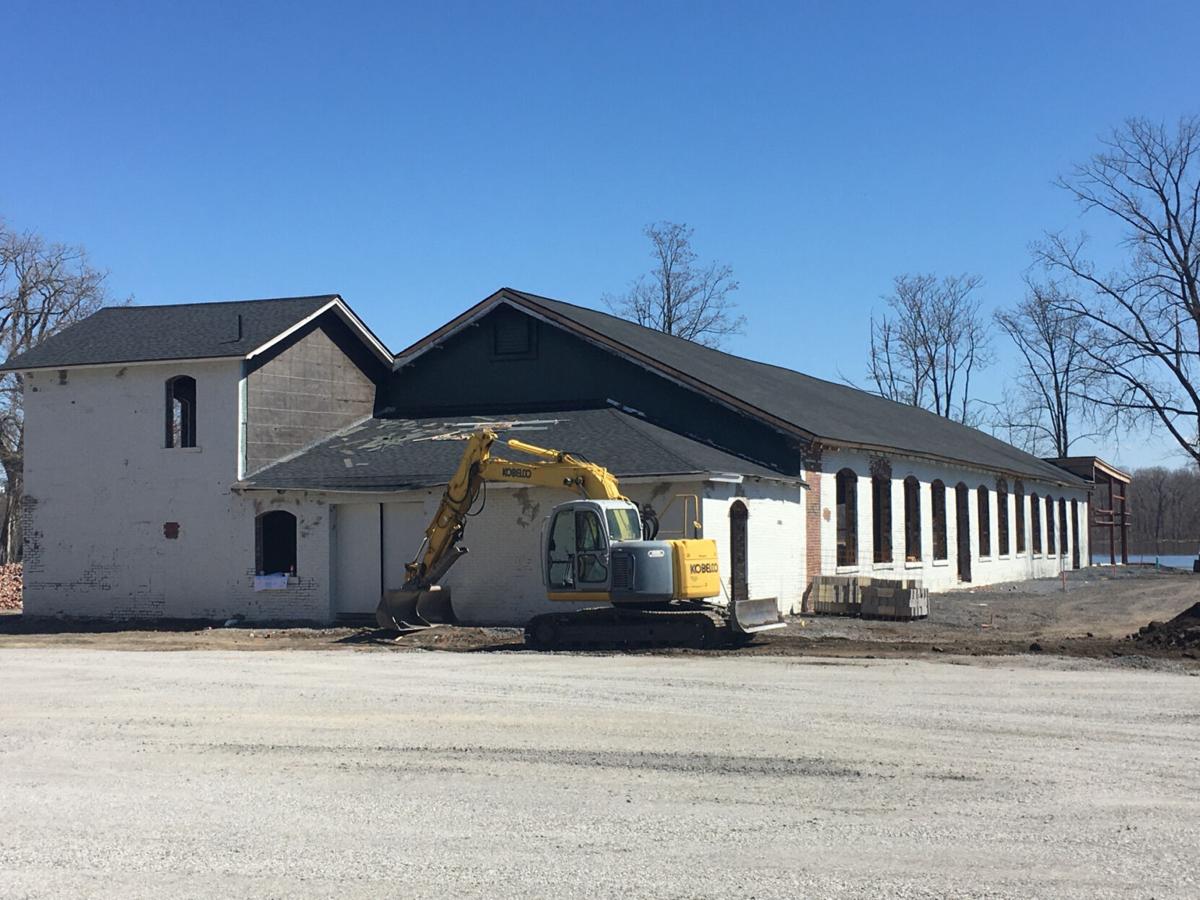 The wedding event center is expected to be the first structure completed on the South River Street project. Melanie Lekocevic/Columbia-Greene Media

An artist’s rendering of the Newbury Hotel. Contributed photo

The existing building will be improved and additions will be built to create the Newbury Hotel on South River Street in downtown Coxsackie. Melanie Lekocevic/Columbia-Greene Media

An artist’s rendering of the Newbury Hotel, which is being constructed on South River Street in downtown Coxsackie. Contributed photo

The wedding event center is expected to be the first structure completed on the South River Street project. Melanie Lekocevic/Columbia-Greene Media

COXSACKIE — Work is underway on a luxury hotel and event center in downtown Coxsackie.

Developer Aaron Flach is building the Newbury Hotel and The Wire wedding and event center on South River Street and expects to have them up and running by May 2022, in time for next year’s wedding season, he said.

The project is expected to bring 38 full-time jobs to the area and is projected to cost about $15 million, Flach said.

Flach acquired a $2 million grant from Empire State Development for the hotel and event center, and is working with the U.S. Small Business Administration for more funding, he said.

Once completed, the project will be a boon to the county economy, particularly during the COVID-19 pandemic, said Karl Heck, director of Greene County Economic Development and Planning.

“Building any kind of hotel during the pandemic has been a challenge,” Heck said Monday. “We are very fortunate to have Aaron [Flach] and his company moving ahead.”

The project will also capitalize on one of the village’s most valuable resources, Heck said.

“Coxsackie has a beautiful waterfront and is a jewel that urban renewal has fortunately missed, so you have this quaint downtown and a beautiful park,” Heck said. “It’s going to be a great setting when he’s done for attracting events and people. The 45-room hotel will be a higher-end boutique hotel and we really need higher-end rooms in the county. This will help meet that need.”

The Newbury Hotel will be a four-story structure with a bridge leading between the original brick building, which will be retained and renovated, and the rest of the hotel. One area of the original brick building that is currently being worked on will serve as a bridal preparation area upstairs, and the downstairs will be a spa with saunas, exercise equipment and other amenities.

The hotel will have artwork on the walls representing the area’s past and some materials from the original site will be repurposed, Flach said.

“The interior design of the hotel will be like a walk through the history of the old industrial past of the area,” Flach said. “I have some great pictures that will be part of the artwork, we are going to build the front desks out of the original materials we still have. We will use glass blocks that used to be in the original windows.”

The hotel is named after James Newbury Ironworks, which occupied the original building on the site.

Plans initially called for keeping and building three additional stories on top of a green building on the site, but the foundation of that structure was deemed insufficient to sustain the weight so the building was torn down, Flach said.

The top of the hotel will include a rooftop bar and outdoor seating area with a firepit, according to the construction plans.

The Wire will also retain some of its historical flavor.

“The Wire is named for State Wire and Cable, which is a business that used to be here in the 1940s,” Flach said. “We want to maintain some of the historical character of the neighborhood — that is why we are reusing some of the original bricks to do a lot of accents in the buildings.”

The event center will host weddings, conferences, banquets, business events and the like.

The hotel will operate year-round and will also serve as a traditional hotel for out-of-town guests and tourists.

“If they just want a weekend getaway, we will have rooftop firepits by the bar so they can sit by the fire and enjoy the riverfront,” Flach said.

The hotel and event center are the first phase of a multi-phase project, he said. Work is also ongoing to renovate the former Patrick Henry’s pub on South River Street, which will continue over the summer. Flach is also eyeing storefronts, restaurants and other businesses on South River Street for the future.

“This will mean a lot of jobs and a really cool tourism component that we haven’t had before,” Flach said. “I think it will bring in a lot of economic activity to the area and it will be something the community can be proud of.”

its very bold, kudos to flach! im not a fan of the architecture of the structure but am hopeful this will be a destination that bring people to the riverfront. The hurdles are big and committing resources to a risky venture deserves the credit. it seems he has big support and the tax incentives are huge. hopefully it will be a success story.

This is very bold and I hope it’s successful. Heritage tourism is the right thing to focus on for this historic village. Now it’s time for NY to work on river excursions from NYC. Tourism pros have long felt that the river lacked interesting stopping points and that was why European style river cruises were not viable. Now we have Kingston and Coxsackie as well as Albany to intrigue tourists. Maybe the vessels would have to stop in Catskill due to logistics but Coxsackie’s massive bus fleet would ferry passengers to Athens and Coxsackie in minutes. Responsible tourism initiatives are so much better than cynical, embarrassing jail boondoggles. Would local parents prefer to see their children secure entry level jobs as front desk clerks or banquet servers dealing with happy visitors or as correction officers destined for a lifetime of horrible day to day experiences?

Flack is also head of the National Bank of Coxsackie and a main reason the new jail is there.

Flach (correct spelling) is not “head of the National Bank of Coxsackie” While he is on the board of directors, that hardly makes him head of anything. Note- there are also six other board members. Just stop with the smearing and misinformation already. You’re stupidity is going to catch up to you.

The corruption in Greene County largely originates in Coxsackie. Martinez is one of their County Legislators, head of the Finance Committee, appointed the ethics chair, and had to recuse from voting for the ethics chair. The jail is there because of Flach and Martinez. We didn't need and can't justify that $90 million new debt obligation. This is the point.

Lol! You don’t stop, even when you haven’t a leg to stand on, or a relevant point to make.