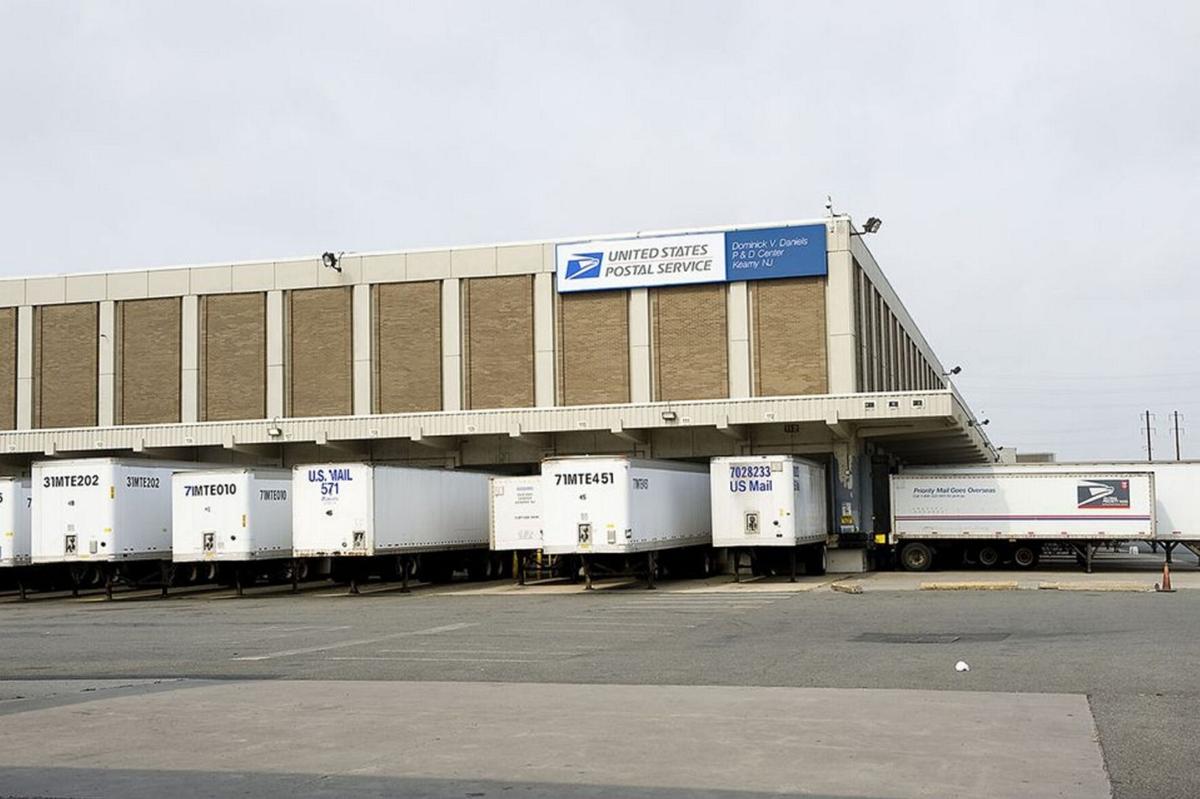 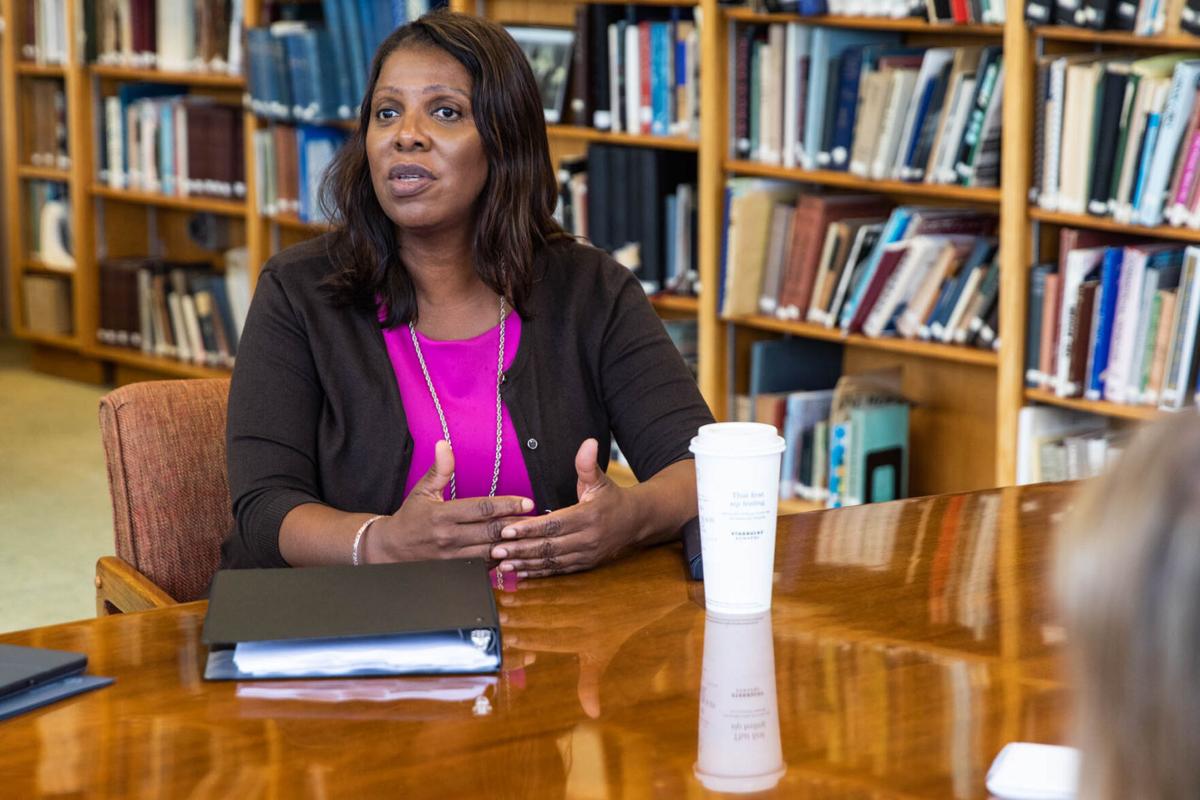 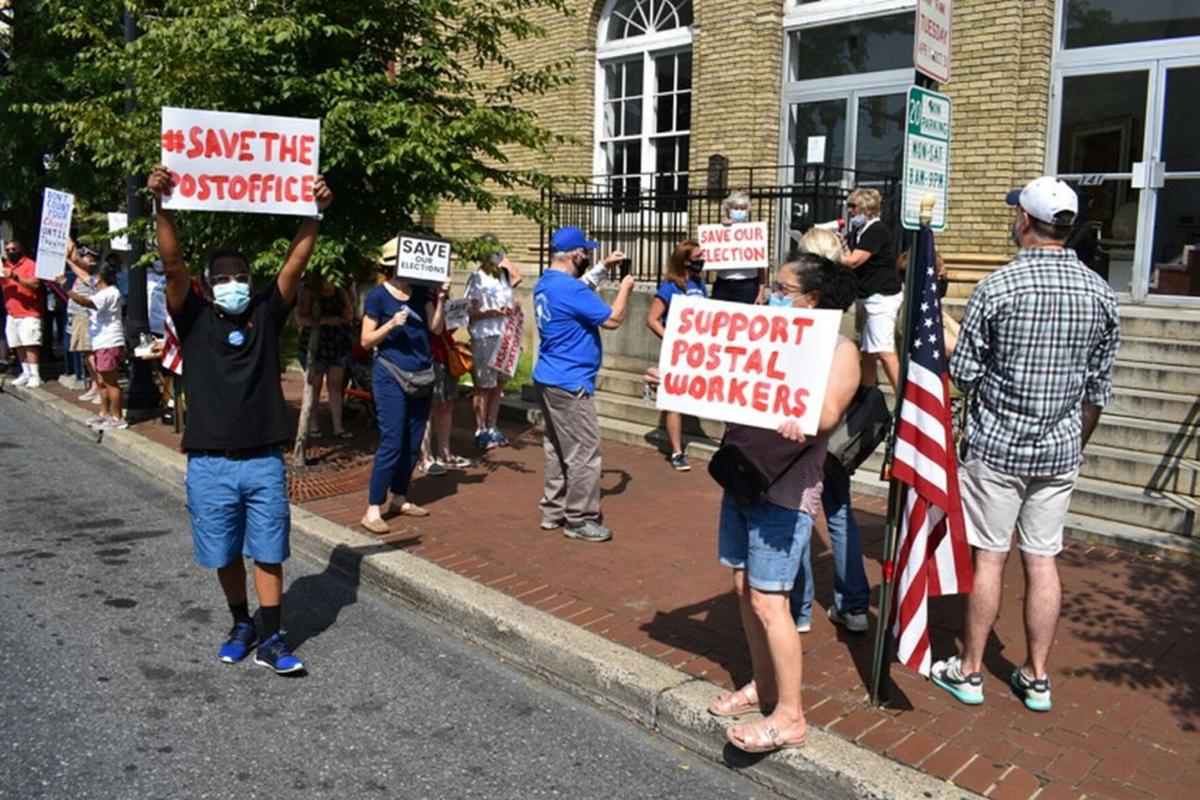 A rally Saturday, Aug. 22, outside the Post Office at 131 W. Fourth St. in Bethlehem, Pennsylvania, calls for funding and protection for the U.S. Postal Service and the resignation of President Donald Trump’s postmaster general, Louis DeJoy, amid cost-cutting measures. Kurt Bresswein/For lehighvalleylive.com/Kurt Bresswein

A rally Saturday, Aug. 22, outside the Post Office at 131 W. Fourth St. in Bethlehem, Pennsylvania, calls for funding and protection for the U.S. Postal Service and the resignation of President Donald Trump’s postmaster general, Louis DeJoy, amid cost-cutting measures. Kurt Bresswein/For lehighvalleylive.com/Kurt Bresswein

New York, Hawaii, New Jersey, the city and county of San Francisco, California, and New York City filed the 64-page suit in the U.S. District Court for the District of Columbia on Tuesday to stop the Trump administration’s attempts to dismantle and disrupt USPS operations to undermine the Nov. 3 election, according to a statement from the state attorney general’s office.

In recent weeks, the USPS — under DeJoy’s directives — has instituted a management hiring freeze, pushed for early retirement for workers and allowed overtime pay to be curtailed at a moment when as many as 40,000 postal workers are either ill or in quarantine from the COVID-19 virus.

“They are making these changes as the Postal Service is expected to handle a record number of mail-in ballots during the November election due to the coronavirus crisis, putting the integrity of our elections in this country at risk,” James said during a conference call with reporters Tuesday afternoon.

The U.S. postal system was established July 26, 1775, by the Second Continental Congress. Benjamin Franklin served as the nation’s first postmaster general. The USPS has acted independently since July 1971 when the agency was excluded from the president’s cabinet in an effort to ensure political independence.

The Postal Service boasts more than 600,000 federal employees who deliver 451 million pieces of mail a day.

More than 42 million ballots were mailed to Americans in the 2018 midterms, and 80 percent of overseas members of armed services voted by mail in 2018. The number of mail-in ballots is expected to be 10 times greater than the average number of absentee ballots, James said.

“This USPS slowdown is nothing more than a voter suppression tactic,” James said. “Yet, this time, these authoritarian actions are not only jeopardizing our democracy and fundamental right to vote, but the immediate health and financial well-being of Americans across the nation. We will do everything in our power to stop the president’s power grab and ensure every eligible voter has the opportunity to cast a ballot come November.”

In the suit, James and the coalition argue efforts to undermine both the USPS and the November elections violate the Postal Accountability and Enhancement Act, the Postal Reorganization Act and the Elections Clause of the U.S. Constitution. The coalition asks the court to vacate all the recent changes made by the USPS and halt the USPS from further implementing the changes on the grounds that they violate statutory and constitutional law, according to the state attorney general’s office.

“It’s difficult to give you a time frame, as you know, this is before a court,” James said, adding she believes there will be time for changes before Election Day.

“The Postal Service has yet to respond. The process will continue. We hope that a timely decision will be made by the courts.”

U.S. House Oversight Committee members grilled DeJoy on Monday when he admitted he did not know about Chapter 39 of the U.S. Government Code, which holds that the USPS “shall be operated as a basic and fundamental service provided to the people by the government of the United States, authorized by the Constitution, created by Act of Congress, and supported by the people.”

He confessed to Democratic Rep. Katie Porter, of California, that he doesn’t know how much postage is required for a postcard, nor has any idea how many Americans “to the nearest million” voted by mail in the last election.

DeJoy, 63, is a Republican megadonor and former owner of a logistics company, which evolved from his father’s Long Island trucking company.

James recounted recent state anecdotes of sluggish or delayed mail around the state. Three post offices in hamlets in western New York, which James did not name, receive 80,000 pieces of mail on a typical day.

“On July 11, these places did not receive a single piece of mail,” she said.

Lawmakers cited concerns about the USPS slowdown having life-threatening impacts on veterans and seniors not receiving medication, or the economic impact of people waiting for pension payments or paychecks.

“It’s been said neither rain nor snow nor gloom of night could stop our letter carriers,” said U.S. Rep. Paul Tonko, D-Albany. “Who would have thought we would have to add political corruption as something challenging them? The Post Office connects us all. It’s a pillar in our democracy.

“This president and his cronies have already caused confusion about how individuals can safely and confidently cast a vote in the middle of a pandemic,” he added.

While the coronavirus has remained on the decline in the state, Gov. Andrew Cuomo’s mandates require New Yorkers to remain socially distanced, or 6 feet, from others and to wear a face mask or covering in public. Voting by mail is a necessity to prevent the virus from spreading, Tonko said.

“Voting by mail should be a very comfortable action — not one that shows doubt around this concept,” he said. “We will push back against this heavy-handed attempt to politicize something as basic as the mail for personal gain and ensure the voices of all Americans are heard this November.”

About 18 percent of Americans pay their via mail, including 40 percent of seniors, and nearly 1 in 5 Americans receive their tax refund by mail.

Approximately 40 percent of small businesses send packages through the USPS each month, according to the state attorney general’s office.