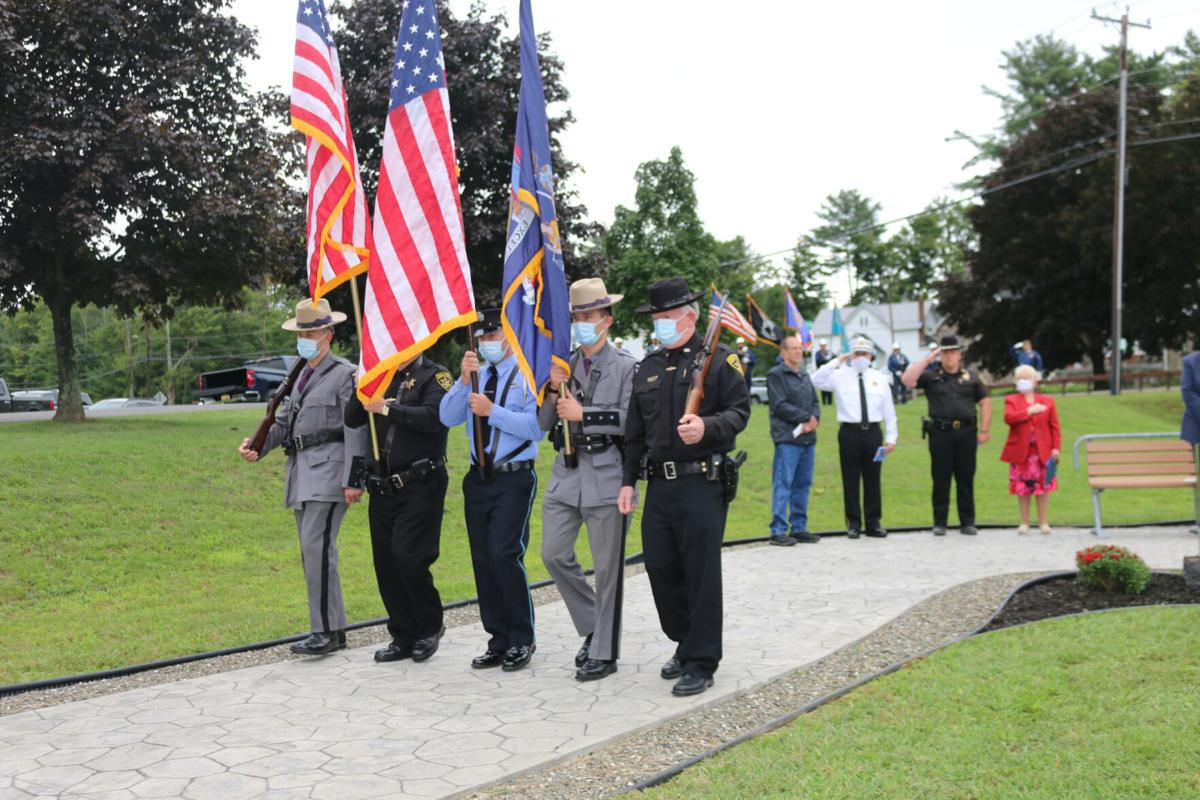 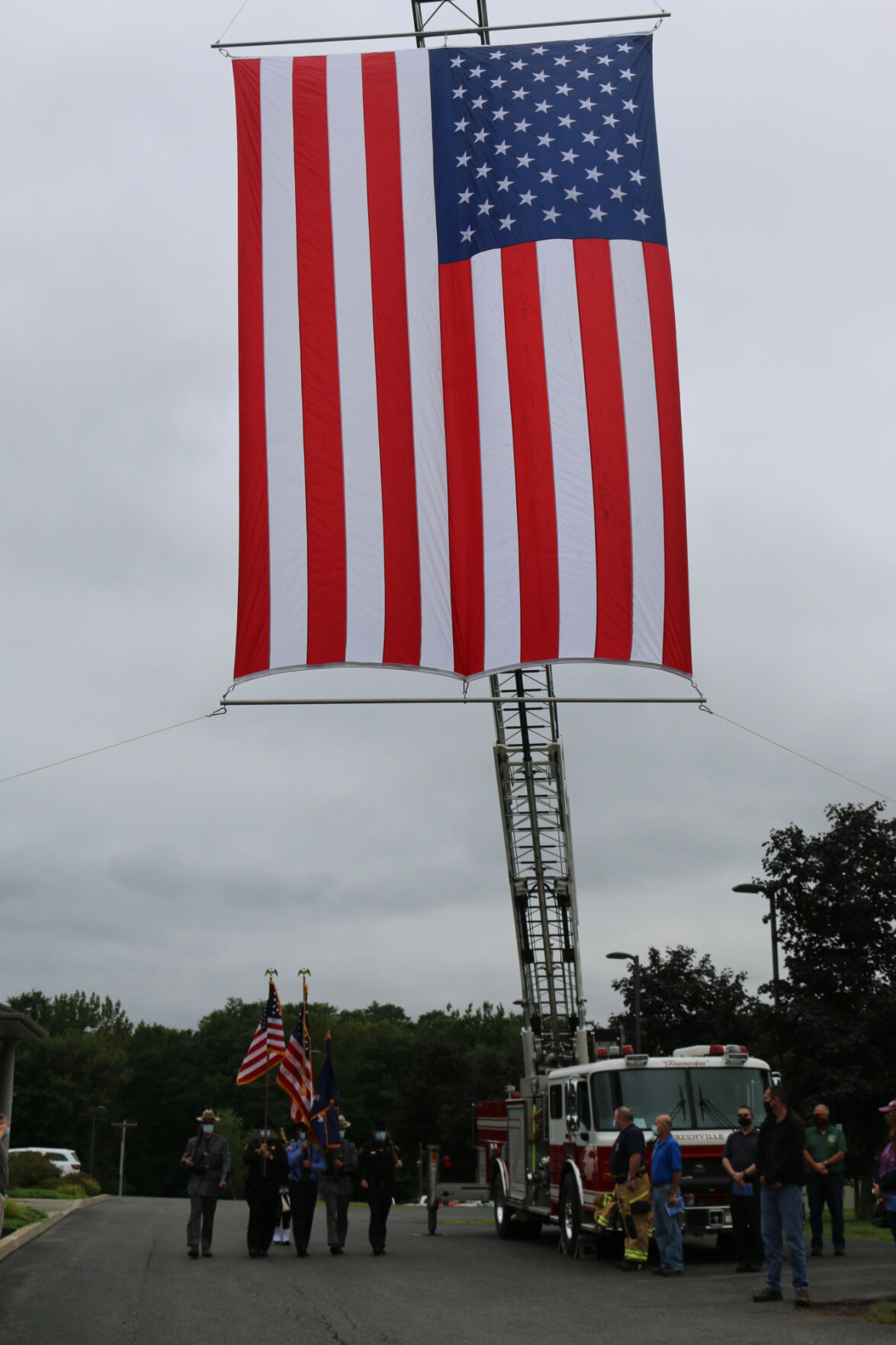 A large flag is hoisted by a fire truck at Friday’s ceremony honoring the victims of the 9/11 terrorist attacks. Melanie Lekocevic/Columbia-Greene Media 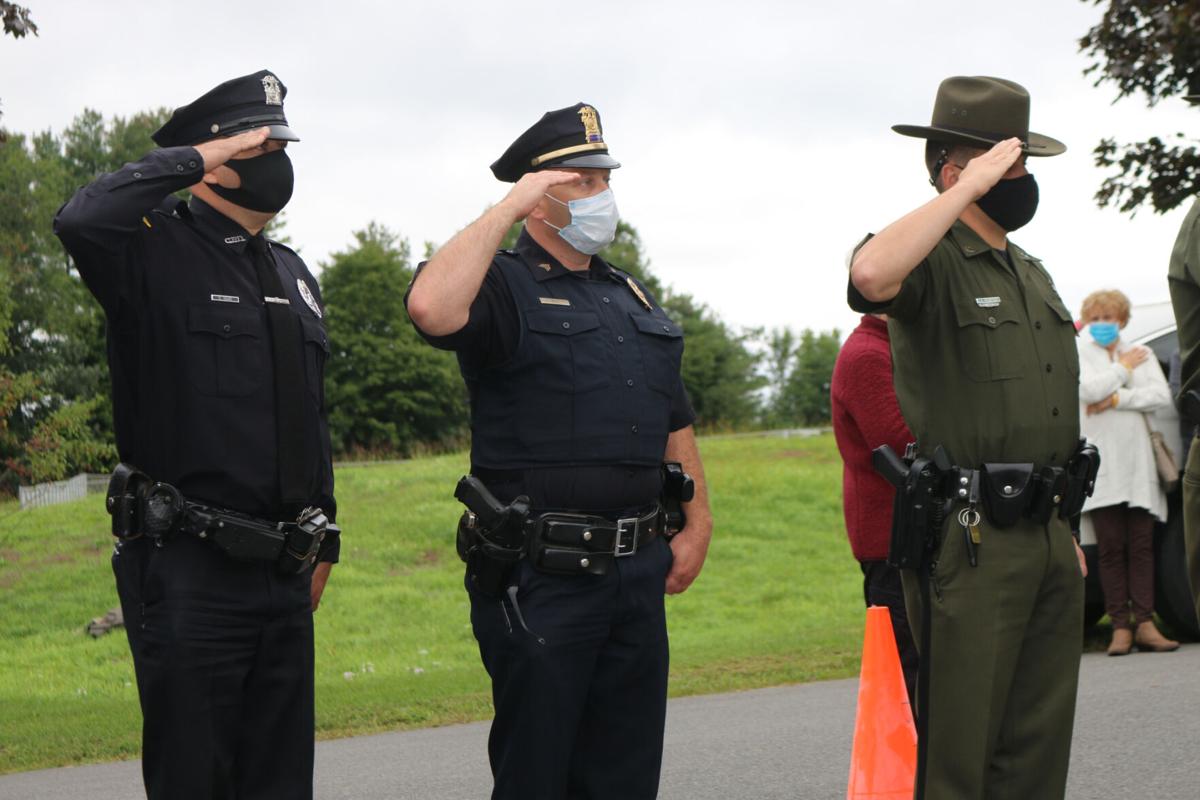 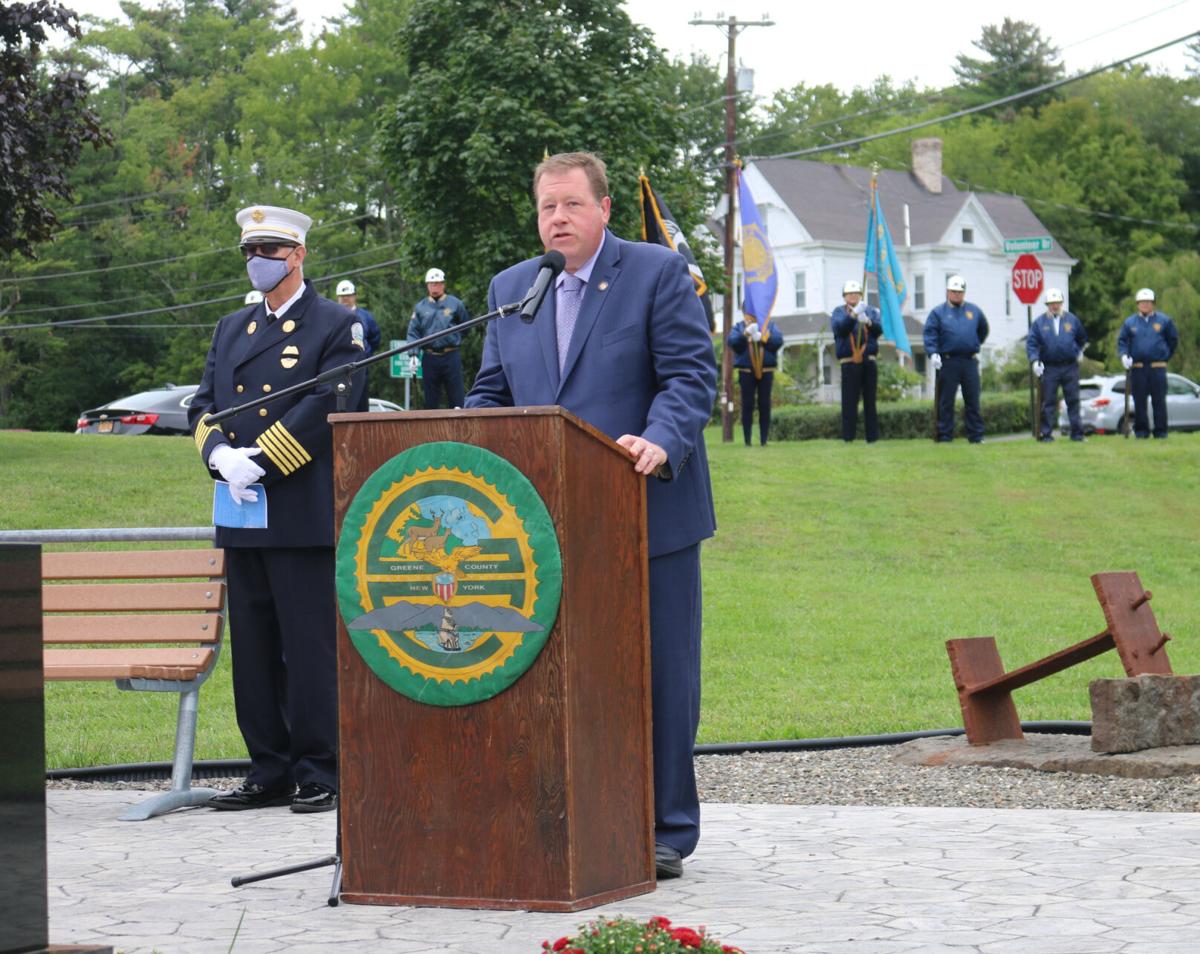 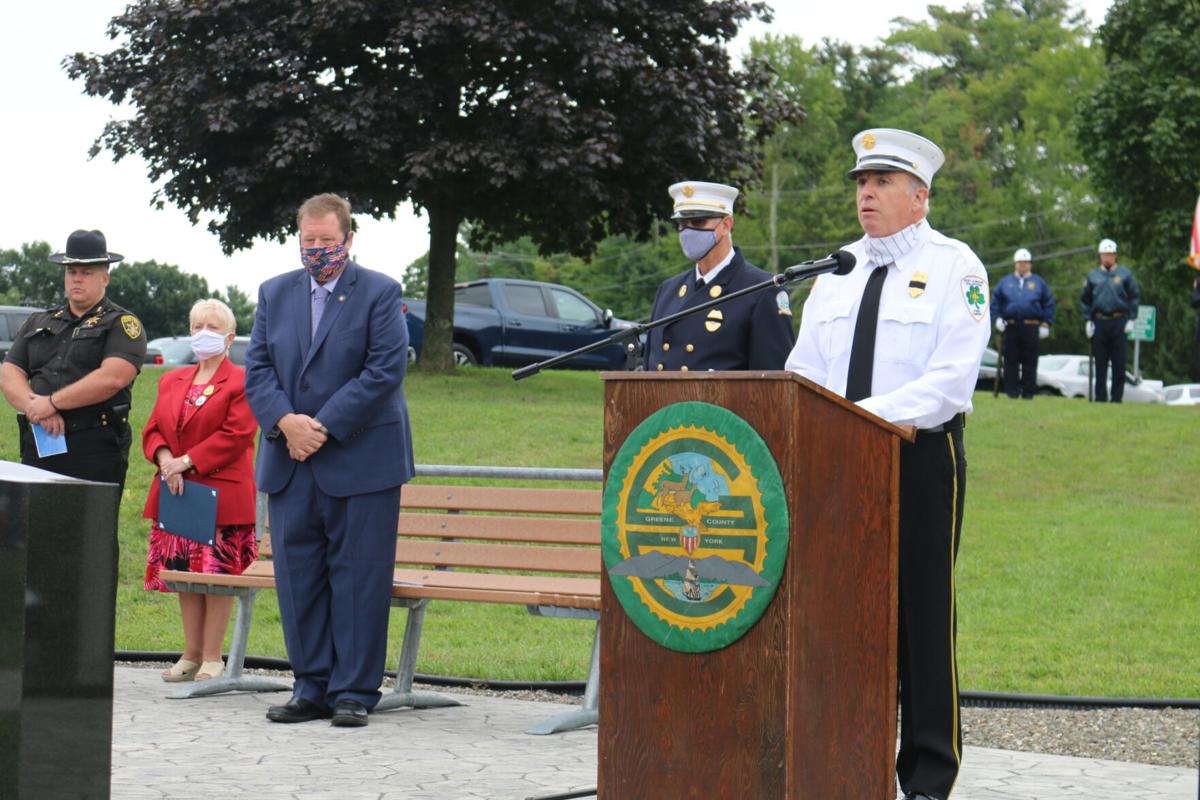 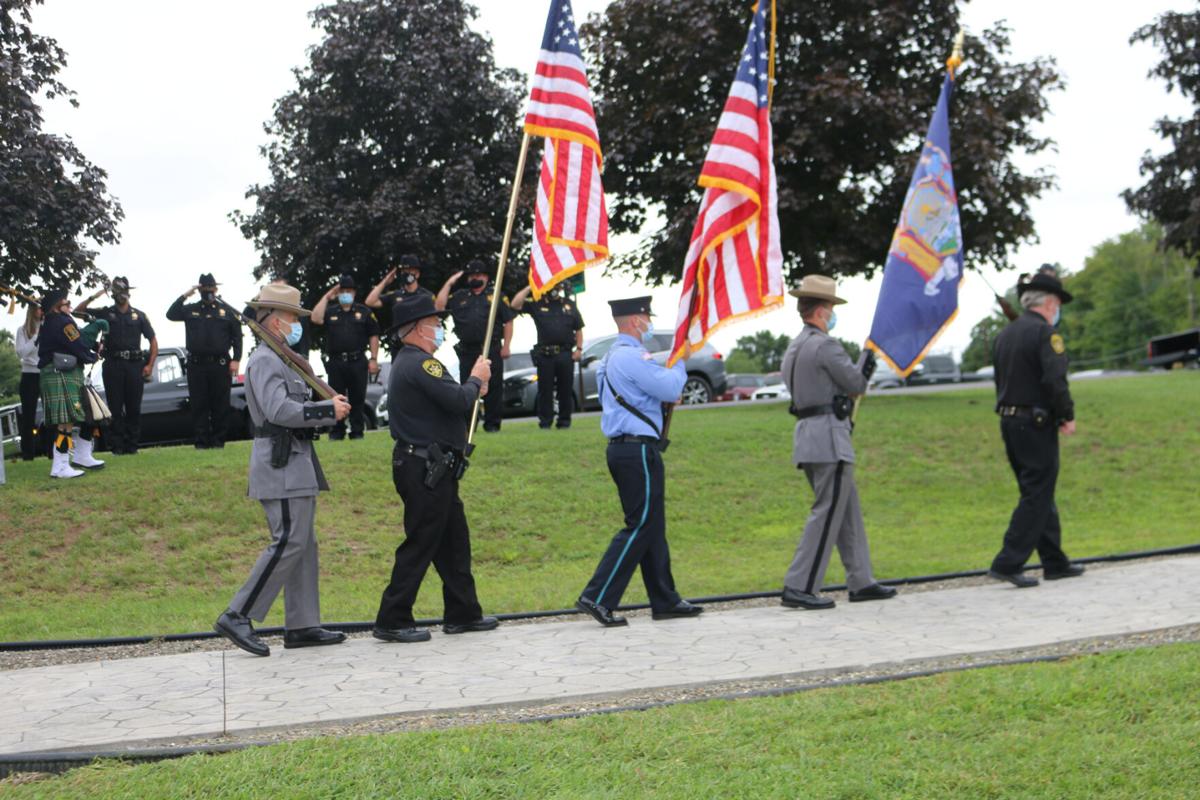 Law enforcement open the Greene County ceremony honoring the thousands of Americans who died in the terrorist attacks 19 years ago. Melanie Lekocevic/Columbia-Greene Media

A large flag is hoisted by a fire truck at Friday’s ceremony honoring the victims of the 9/11 terrorist attacks. Melanie Lekocevic/Columbia-Greene Media

Law enforcement open the Greene County ceremony honoring the thousands of Americans who died in the terrorist attacks 19 years ago. Melanie Lekocevic/Columbia-Greene Media

CAIRO — It was 19 years ago when terrorist attacks struck American soil and changed the United States forever.

The attacks of 9/11 left 2,977 people dead in the collapsing towers of the World Trade Center in New York City, the Pentagon in Washington, D.C., and in a plane crash in Shanksville, Pennsylvania.

Greene County pulled together Friday morning — masked and socially distanced due to COVID-19 — for its annual tribute to the firefighters, police, first responders and troops who died in the attacks and the aftermath.

The ceremony was held outside the Greene County Emergency Services facility, 25 Volunteer Drive, in Cairo.

“Throughout history, there have been moments in time when a generation can vividly remember exactly where they were and what they were doing in these exact moments,” Greene County Legislator Matt Luvera, R-Catskill, said as he opened the ceremony.

Sept. 11, 2001, is one of those days that will live on in the memories of those who lived through it, Luvera said.

“The events of Sept. 11, 2001, inflicted devastation that will always linger in our hearts, minds and souls,” Tague told the crowd. “Nearly 3,000 American lives were lost and more than 6,000 others were injured in these horrifying incidents in New York City, Washington, D.C., and Pennsylvania. Countless more lives were forever changed as our loved ones perished and our nation was devastated.”

Surviving family members of those lost that day have persevered through one of the nation’s greatest tragedies, and society was changed forever, Tague said.

“When faced with crisis and tragedy, Americans always come together,” Tague said. “Sept. 11 was a day of unspeakable chaos, fear, confusion and terror. The damage was staggering, and if not for the selfless bravery of the emergency workers, firefighters, our police officers, first responders and volunteers who selflessly rushed to help at the World Trade Center, it may have been even worse. For our emergency first responders, we must always be grateful.”

Strength, compassion and resilience were the cornerstone of their response to the tragic events of that day, Tague said.

“As we reflect today on those tragic events 19 years ago, let us reaffirm that no amount of malice and evil will ever, ever diminish the spirit or the might of the United States of America,” Tague said. “We will never stop being the beacon of hope, peace and fortitude we have always been.”

Greene County Undersheriff Adam Brainard and Richard Frasco, senior emergency operations dispatcher for the county, read the names of deceased law enforcement, firefighters and first responders on the county’s Roll of Honor, followed by the solemn ringing of a bell after each name.

“We are 19 years in and we are still losing people, so I hope this is something we never forget,” Greene County Legislator Patrick Linger, R-New Baltimore, said after the ceremony’s conclusion.

First responders who rushed to the scene of the World Trade Center on that day and survived continue to be diagnosed with illnesses and conditions caused by their exposure to toxic materials at the site, according to the Centers for Disease Control and Prevention.

The conditions range from asthma and chronic laryngitis to interstitial lung diseases, cancers, including Hodgkin’s disease, non-Hodgkin’s Lymphoma and various forms of leukemia, and numerous respiratory and skin diseases, according to the CDC.

The sacrifices made by those who died that day and in the days, weeks and years that followed, must never be forgotten, Greene County Legislator Harry Lennon, D-Cairo, said.

“We can never, never forget the attack on our country and our heroes that day,” Lennon said. “I know I will never forget, and it is important for us to continue these ceremonies every year so it remains in everyone’s mind.”