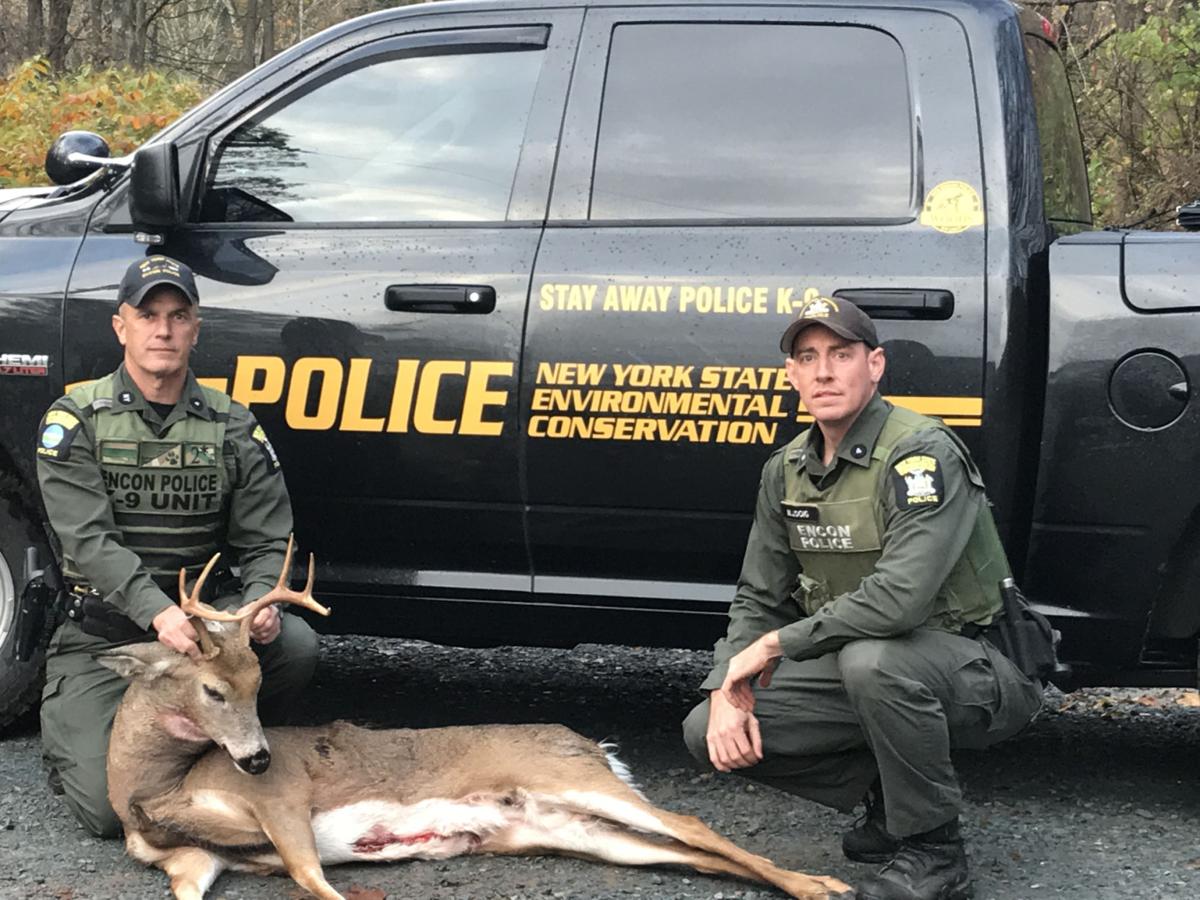 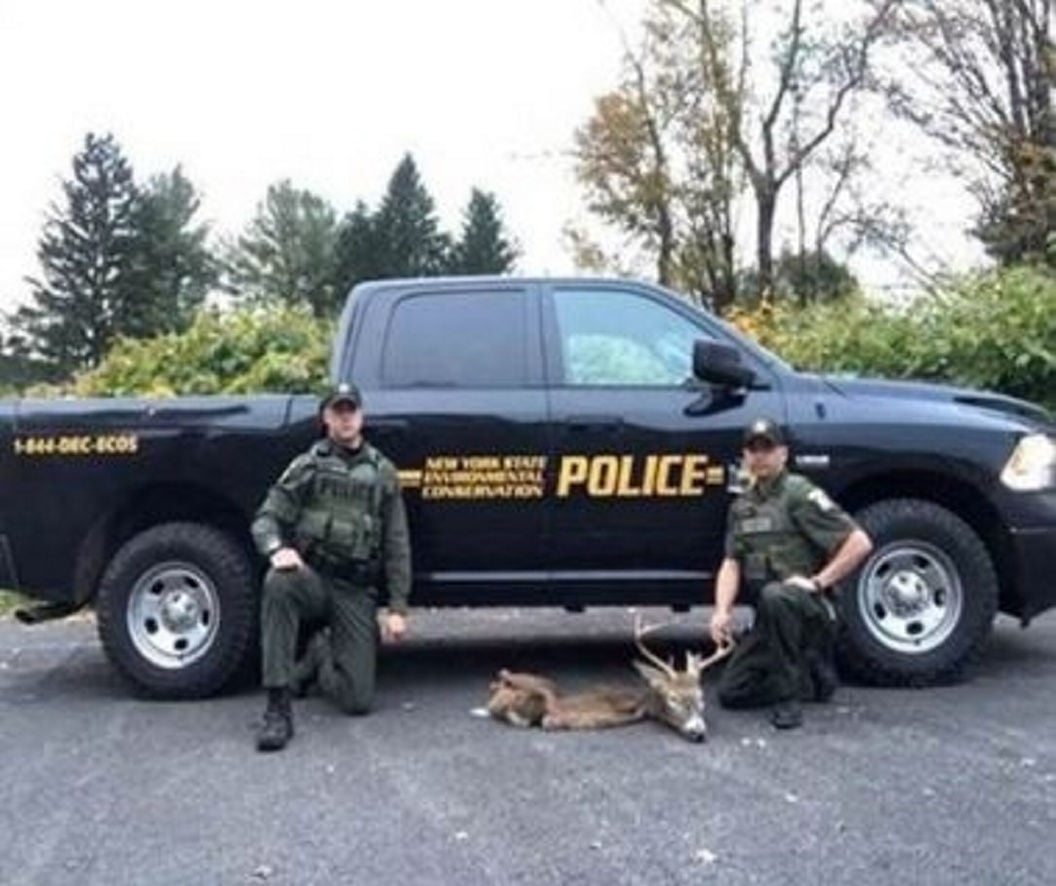 Photo contributedECO Dustin Osborne (left) and ECO Jared Woodin (right) with another illegal buck taken with a crossbow in Delaware County in the early archery season.

Photo contributedECO Dustin Osborne (left) and ECO Jared Woodin (right) with another illegal buck taken with a crossbow in Delaware County in the early archery season.

Today, Saturday, November 2 is opening day for using a crossbow to take deer and bear in the Southern Zone in NY. It runs concurrent with the long-established early archery season, until both seasons close the day before regular gun season for big game. This year regular gun season begins at sunrise on November 16.

Crossbows offer some definite advantages as far as ease of operation when compared to compound bows. Becoming proficient with even the most advanced model compound can take weeks, if not months of practice. Crossbows are much easier to learn to shoot.

You can buy one equipped with a scope and become proficient enough for a clean kill out to reasonable distance in a day. It’s the lack of physical ability required and “point and shoot” similarity to rifle marksmanship that makes it easy to get good with a crossbow quickly.

A friend of mine developed some debilitation in one shoulder and he can no longer pull back his compound bow. This is an extremely common occurrence, especially considering the aging demographic of active hunters in NY. Such injuries would probably not qualify most for a modified crossbow permit.

Now that crossbows are legal in the latter half of the early bow season, hunters with that plight get to do some early deer season hunting. My friend got a great 70th birthday present this year from his family; a fully outfitted crossbow which he quickly mastered and is putting to good use right now.

While there are many such positive outcomes stemming from adding crossbows as a legal hunting implement for taking game, there are definitely some negatives.

Among the downsides to the ever-increasing popularity of crossbows in NY are their ease of use for illegal hunting as well as legal hunting. Then again, that could be said of most any hunting implement.

The crossbow’s distinct advantage over compound bows are its ease as a “point and shoot” hunting implement and that leads illegal hunters to take advantage of having a “bow” killed deer during the early season.

The amount of movement needed to pull back compounds, recurves or stick bows requires much more stealth and timing for wary deer and bear.

That was likely one of the motivating factors for a number of subjects recently arrested using crossbows illegally by NYS Environmental Conservation Officers (ECOs) in Delaware, Otsego, and Albany Counties. Here are two excerpts from the Division of Law Enforcement’s Officer Highlights:

On Oct. 12, ECO Dustin Osborne received an anonymous tip about a subject who had possibly killed an illegal buck with a rifle during the early archery season in the town of Deposit. ECOs Osborne and Jared Woodin responded to a hunting camp where the officers discovered empty bags of bait scattered around and a gut pile in the front yard.

No one was at the residence when the officers arrived. The ECOs examined the field-dressed deer’s entrails and found a clean archery shot through its vitals, as well as a cocked crossbow hanging inside the front door. The officers also discovered additional bags of deer bait on the back of an ATV.

Shortly after the ECOs arrived, a subject returned to the camp with an eight-point buck, which he admitted he shot over a bait pile with a crossbow earlier that day. Crossbows are not a legal implement for hunting big game during early archery season.

ECOs Osborne and Woodin seized the deer and issued the subject tickets for killing a deer over bait, hunting over bait, and killing a deer by means not specified. The subject was immediately arraigned in the Town of Deposit Court, where he paid a penalty for his violations.

On October 19, 2019 ECO Nathan Doig and ECO Vern Bauer were checking camps in a remote area in the Town of Hancock when they came across an individual who had a six-point buck. Upon checking the deer in the garage, the ECOs noticed several bags of corn and other deer attractants as well as the tag on the deer belonging to the son who was no longer there.

ECO Doig and Bauer interviewed the subject who stated his son had shot the deer behind the house. ECO Bauer located bait as well as a bolt from a crossbow. ECO Doig was able to locate a blood sample that was retrieved for possible DNA testing.

The subject was ticketed for the illegal deer, hunting over bait, using a crossbow during the regular bow season, using tags of another, and killing deer in excess of the bag limit. All tickets returnable to Hancock Town Court.

In two other unrelated cases, ECO Russ Fetterman caught several juveniles shining a light while in possession of a crossbow and several firearms in Otsego County and in Albany County ECO Kurt Swan ticketed a subject with a cocked and “loaded” crossbow in a motor vehicle.

The Polish Sportsmen Club is sponsoring a turkey shoot on Sunday, November 10 at their club beginning at 9 a.m. Second place prizes include chickens. Breakfast, lunch, and refreshments will be available.