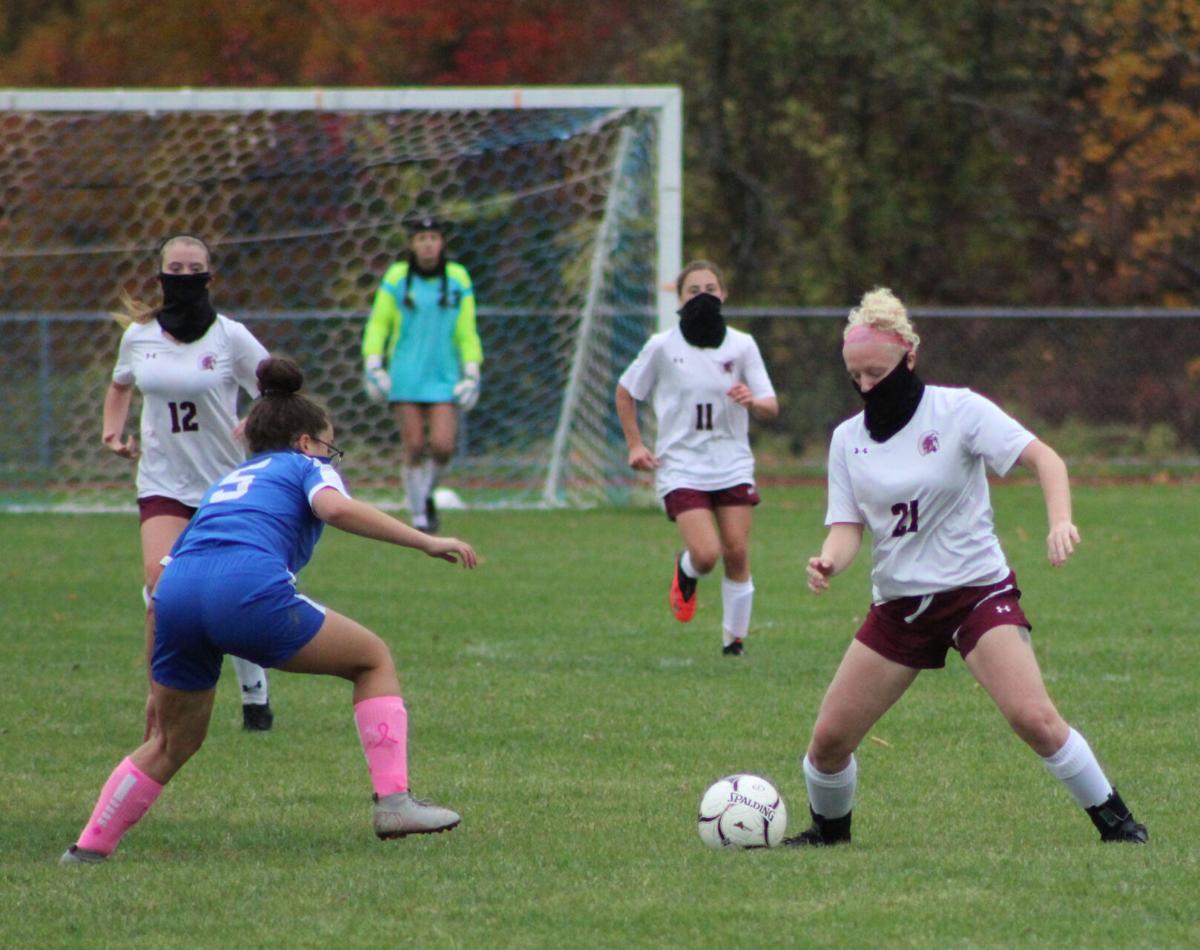 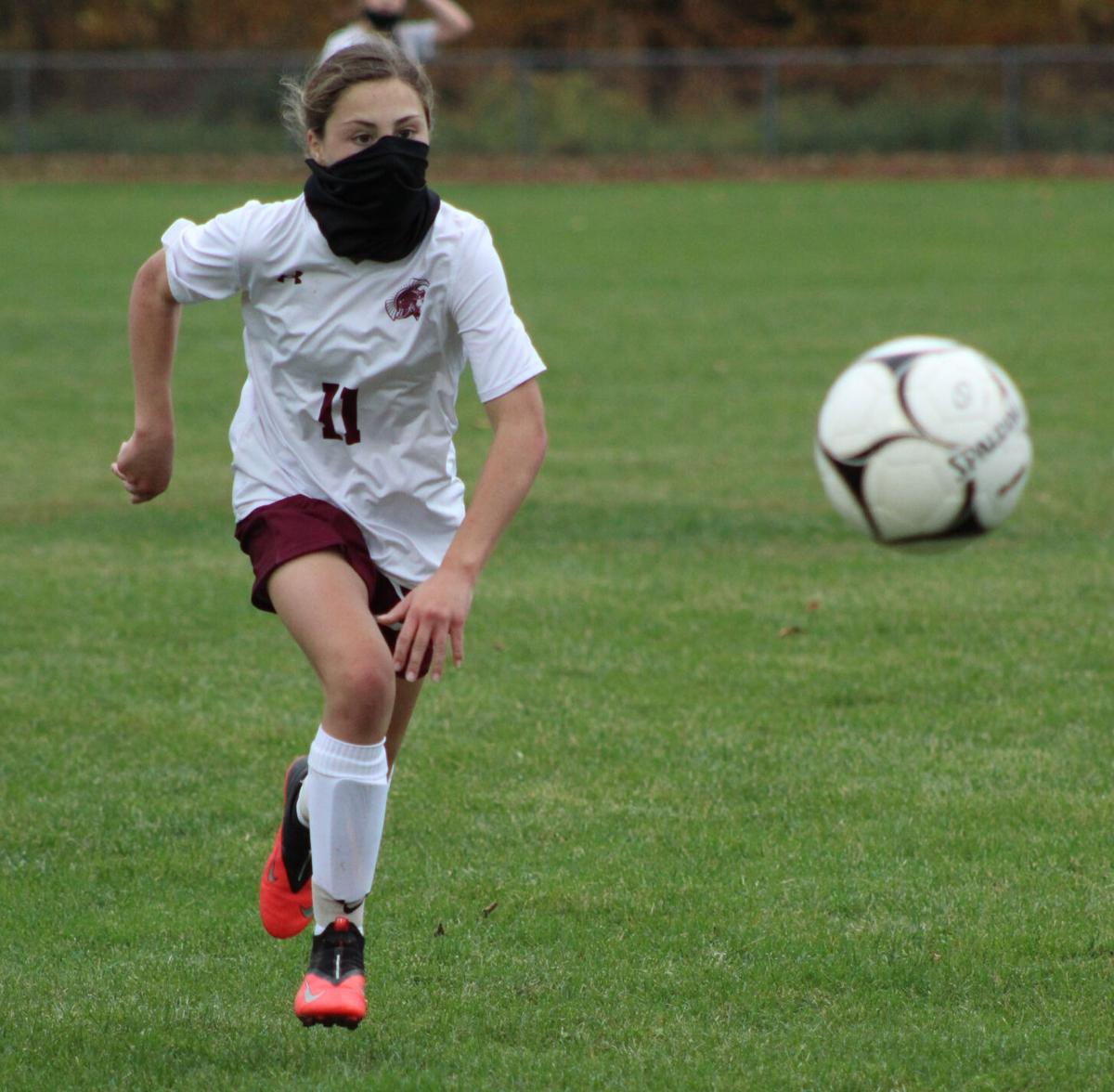 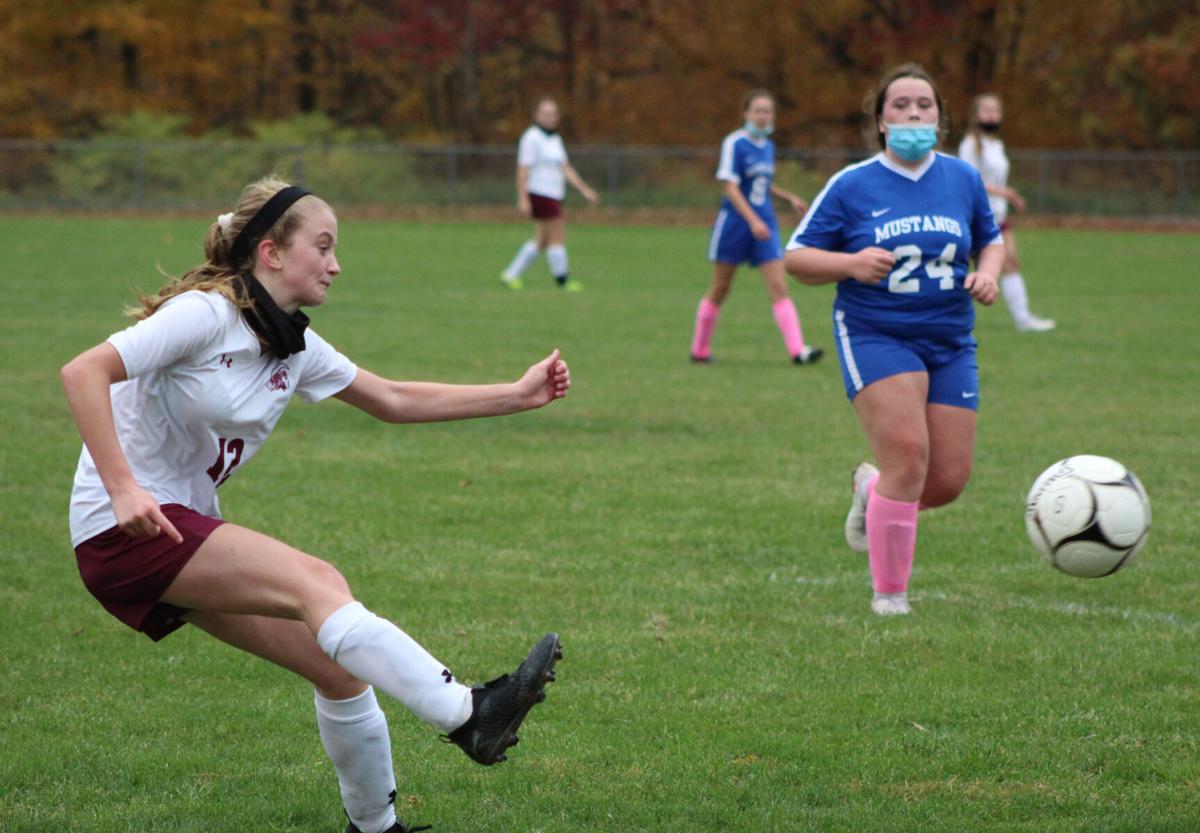 EAST DURHAM — The Greenville Spartans kept their undefeated streak alive in this shortened season, in a tight game at Cairo-Durham High School against the Mustangs, 2-1, in Patroon Conference girls soccer action.

Mustang senior Xxaria Makely scored on a penalty kick, but Cairo-Durham’s lone goal was bested thanks to a pair of goals from Greenville freshman Ella Mulholland.

This battle of unbeatens began with the Spartans (5-0) trying to out-muscle the Mustangs with nonstop offense. However, Cairo-Durham’s defense remained dedicated to facing that challenge with ferocity throughout the contest.

Both teams showed tremendous hustle and grit on both sides of the ball, and were unwilling to give an inch of space to their opponent.

The Spartans’ first big opportunity came on a pass across the Mustangs’ box, but the ball landed on top of the net. Abigail Brandow earned a free kick at the other end for the Mustangs, but her kick went directly into the hands of Spartan keeper Josephine O’Hare.

After more tough defense from each team, Xxaria Makely was awarded a penalty kick after being fouled, and she graciously took the opportunity to break the scoreless tie and the Mustangs led 1-0. Not longer after, Ella Mulholland scored the equalizer for Greenville, thanks to an outlet pass from Annelise Goyette, putting the Spartans on the board and tying the game at 1-1.

Shortly before the break, the Mustangs and the Spartans both had golden opportunities to score, but neither could find the back of the net as the first half ended.

The Spartans came out of halftime with the same intensity as they showed the entire first half of the game, catching the Mustangs off guard for a few minutes. Cairo-Durham (3-1-1) recovered quickly, continuing their incredible defense, but the Spartans would not let up.

After the Mustangs failed to score on a free kick and a corner kick, Spartan goalie Josephine O’Hare saw an opportunity and threw a perfect pass to a teammate and the play turned on a dime, to a two-on-one attack for Greenville. Luckily for Cairo-Durham, a defender saw this coming, and she sprinted back and stole the ball away to preserve the tie and prevent a shot on goal.

On a subsequent possession for the Spartans, Mustang goalkeeper Noelle Amoroso got crossed up on a pass, but recovered in time to make a diving stop, punching the ball away from the net.

The Mustangs’ next chance came on a pass from Hannah Esslie to Xxaria Makely but her shot went wide of the goal and glanced off of the post and rolled out of bounds for a goal kick. Cairo-Durham was unsuccessful on two more corner kicks, and Esslie dribbled her way through the Greenville defense, but her shot deflected off of a defender’s chest and went out of bounds.

On the Mustangs’ following possession, they managed a shot on goal, but O’Hare made her most clutch save of the game and popped the ball up and behind the net to prevent a score.

Amoroso responded on the defensive end as well, making save after save at the other end for the Mustangs. With only a few minutes left on the clock, the Spartans finally caught a break, and Mulholland scored her second goal of the game to give Greenville the lead, 2-1.

The last big opportunity for Cairo-Durham to tie the game came on a free kick that was not converted, and the Spartans clung to the lead down the stretch and won a defensive war on the road, 2-1.

“Our girls played with a lot of intensity today, coming out strong from the beginning,” Cairo-Durham coach Samantha Spohler said. “McKayla Mudge had a great game at stopper, covering a lot of ground and breaking up a lot of plays.

“Our keeper Noelle had her best game of the season so far, coming up with some key saves. Definitely not the outcome we were looking for today but we are improving with each game and hope to shake things up as the season is coming to a close.”

CASTLETON — Alayna Fletcher provided Maple Hill with all the offense it would ned, conecting for two goals as the Wildcats defeated Catskill, 2-0, in Monday’s Patroon Conference girls soccer game.

Gianna Morse assited on one of Fletcher’s goals.

Fifth singles and both doubles were suspended due to rain. Because the match had been decided, those remaining matches will not be made up.

5 ways to create a healthy indoor environment this season

A simple guide for planning a DIY bathroom project

Ace the Spring Semester With the Following Tools and Strategies