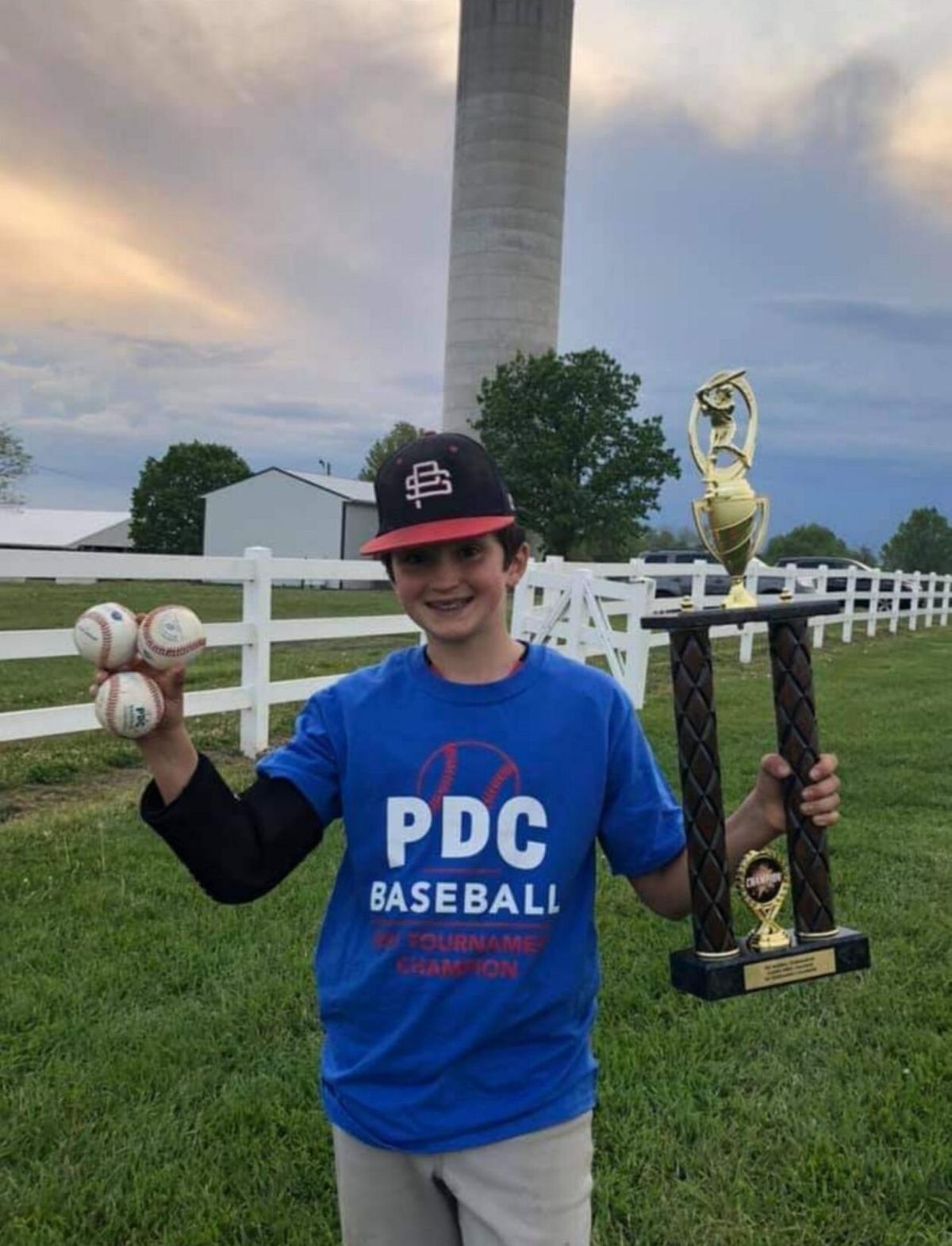 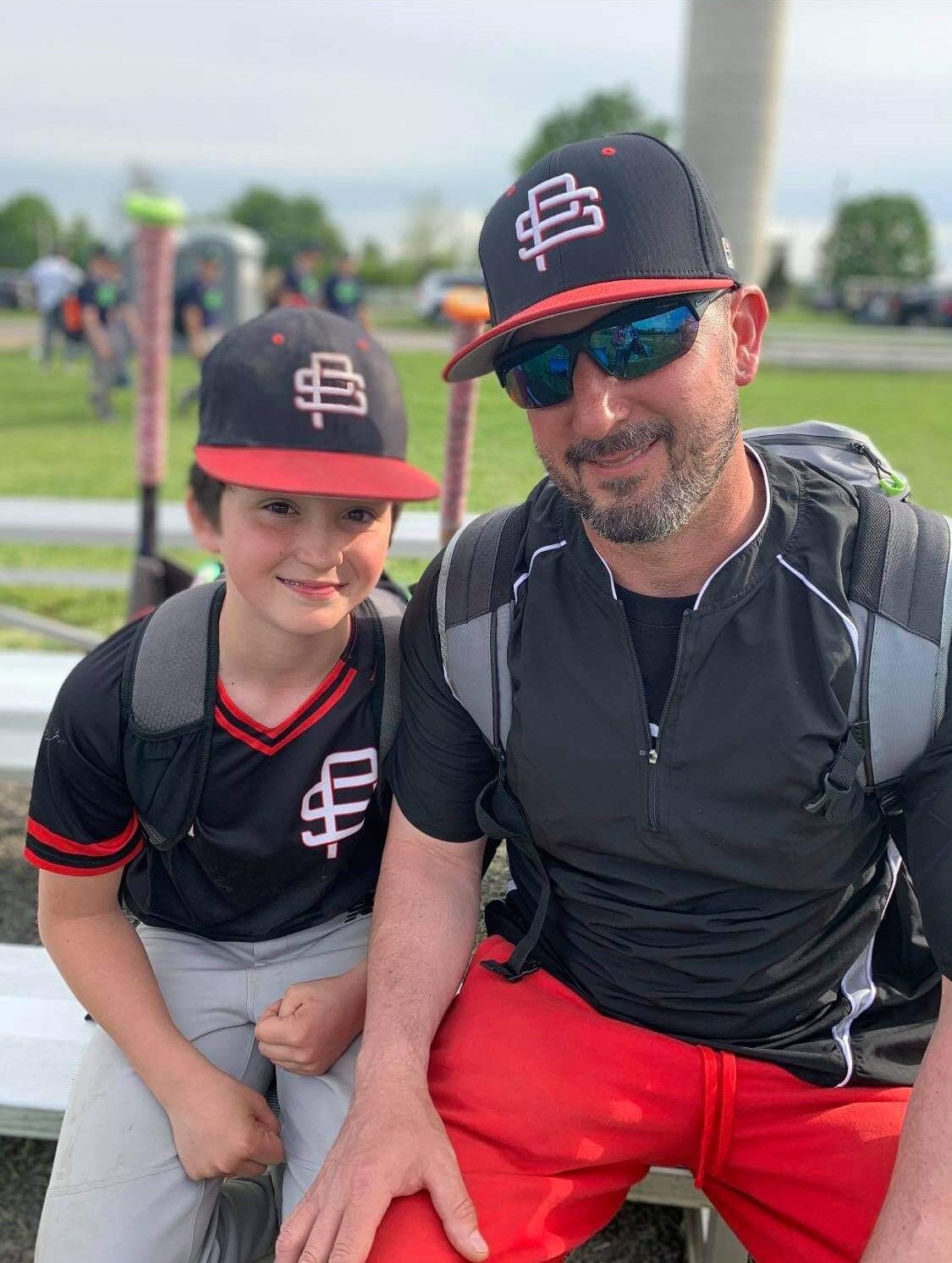 Tristan Super and his Dad, Tom, at the PDC Golden Spikes Challenge in Bucks County, Pa. Tristan hit three home runs and drove in seven runs while going 7 for 14 to help Spring Prodigy 12U win the tournament championship.

Tristan Super and his Dad, Tom, at the PDC Golden Spikes Challenge in Bucks County, Pa. Tristan hit three home runs and drove in seven runs while going 7 for 14 to help Spring Prodigy 12U win the tournament championship.

NEWTOWN, PA. — Tristan Super had a weekend most young athletes could only dream about.

Since the travel baseball season started in March, Super has seven home runs and 29 RBI with a .417 batting average and 26 runs scored. He has an on-base percentage of .533 and a slugging percentage of .833.

Super also got it done on the mound, turning in a complete game performance in the championship game, striking out five and walking just one.

Bethlehem pushed across a run in the bottom of the sixth inning to defeat the Chatham Reds 12U, 9-8, in Sunday’s travel baseball game.

The Reds had rallied from an 8-4 deficit with four runs in the top of the sixth inning to even the score at 8-8, with Brody Casivant’s three-run homer the key blow.

In addition to Casivant's jack, Bronson Haner had two singles for the Reds. Connor Madsen singled and drove in two runs, Cooper Steltz had an RBI single and Jackson Carl, Drew Horton and Owen Wilbur all singled.

Brayden Steltz walked with the bases loaded with two outs in the bottom of the sixth to force in the winning run as the Chatham Reds 12U edged East Greenbush, 16-15, in Saturday’s travel baseball game.

With the scored tied 15-15 with two outs and nobody on base in the last of the sixth, Aidan Madsen, Connor Madsen, Landon Van Alstyne and Brayden Steltz drew consecutive walks to give the Reds the hard-fought victory.

Griffin Reardon had a big day at the plate for Chatham, belting two triples and a double with two RBI. Jackson Carl added three singles and two RBI, Bronson Haner had two singles and an RBI, Brayden Steltz singled and drove in two, Van Alstyne, Owen Wilbur and Drew Horton each had a single and an RBI and Connor Madsen drove in a run.

Reardon, Cooper Steltz and Brayden Steltz all pitched for the Reds, combining for four strikeouts while allowing 15 runs (six earned) and five hits

Tyler Peck singled in Brandon Rossano with what proved to be the winning run in the bottom of the sixth inning as the ENY Blackhawks 14U edged the Waterford Nationals, 3-2, in the first game of Sunday’s travel baseball doubleheader.

Waterford led 2-0 entering the bottom of the sixth, but Dom Pelizza and Max Frering both walked and moved up a base on a wild pitch. Rossano followed with a two-run double to tie the game, setting the stage for Peck, who came through with his clutch hit.

Rossano finished with a double and single with two RBI for the Blackhawks. Peck had a single and an RBI and Jacob Macfarlane singled.

Max Frering ripped a triple and two doubles with two RBI and four pitchers combined on a two-hitter as the Blackhawks 14U defeated the Waterford Nationals 14U, 13-0, to complete a doubleheader sweep.

Dom Pelizza, Carpenter, Tyler Peck and Devin Scali all had a turn on the mound for the Blackhawks, striking out eight, walking six and allowing three runs and just two hits.

The Columbia Clippers 10U travel baseball team split a doubleheader with the TC Bombers on Sunday, dropping the opener, 10-2, and then bouncing back to take the nightcap, 12-7.

In the opener, the Clippers managed just one hit, single by Otto Semp. Semp also drove in a run.

In the second game, Amarion Perry had two singles and Mason Briscoe and Logan Burleigh combined to throw a three-hitter as the Clippers salvaged a split.

Braeden Barnes, Otto Semp and Tanner Kelly each had a single and an RBI. Evan Conte added a single.

Briscoe struck out six, walked three and allowed seven runs (one earned) and three hits in five innings. Burleigh struck out one in his one inning.

Twin Town 8U jumped out a 2-0 lead in the first inning and went on to edge the Greene County Outlaws 8U, 3-1, on Sunday.

Caleb Frisbee had a single and an RBI for the Outlaws. Braden Martin, Chris Brown and Madi Van Alphen each had a single.

Niskayuna 8U slipped past the Greene County Outlaws 8U, 11-10, in Friday’s Travel Baseball game.

Van Alphen, Lenzo and Caleb Frisbee all pitched for the Outlaws, striking out five, walking 11 and allowing 11 runs and four hits.