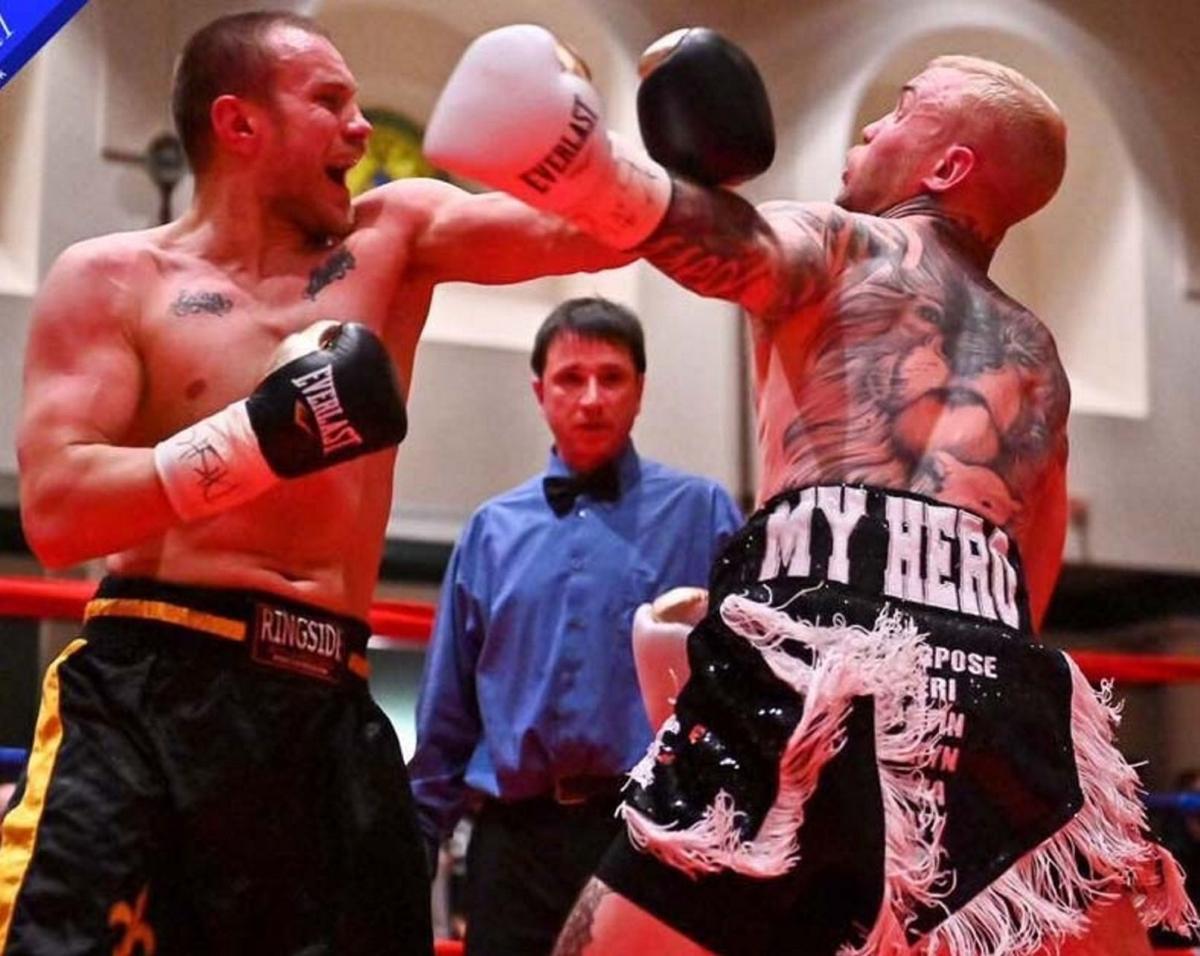 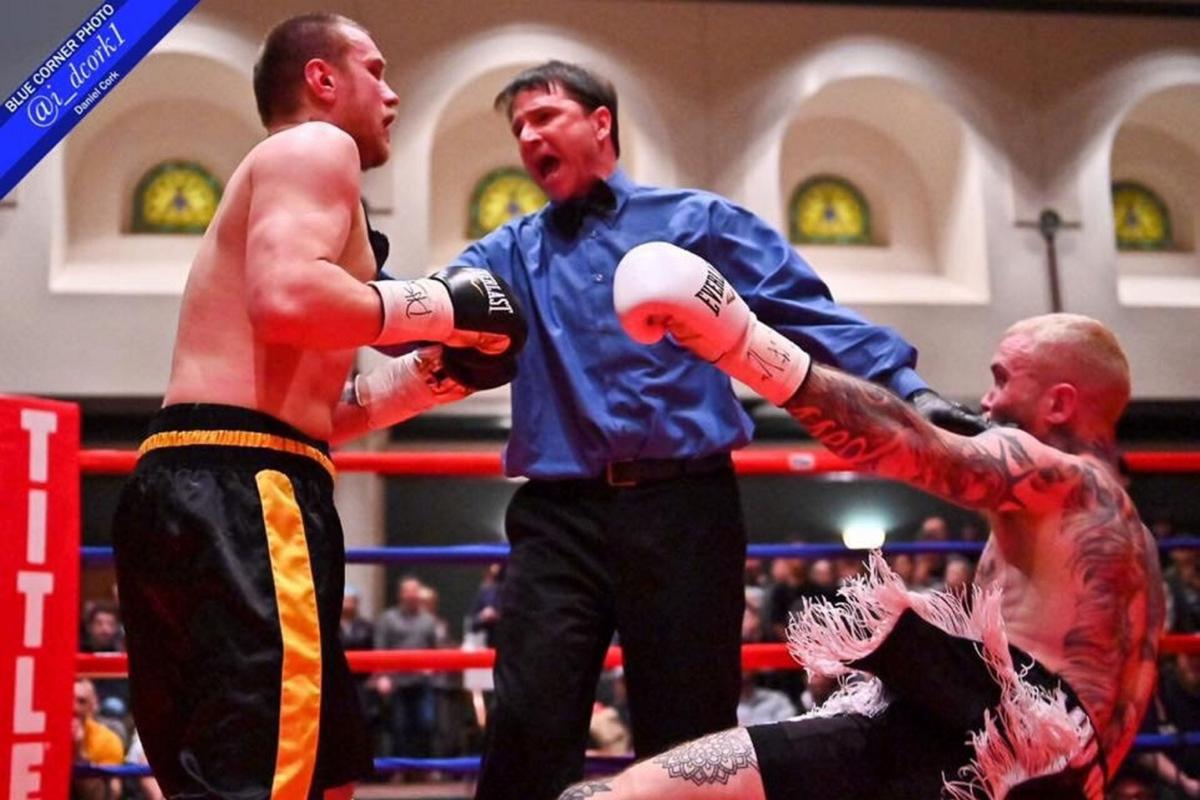 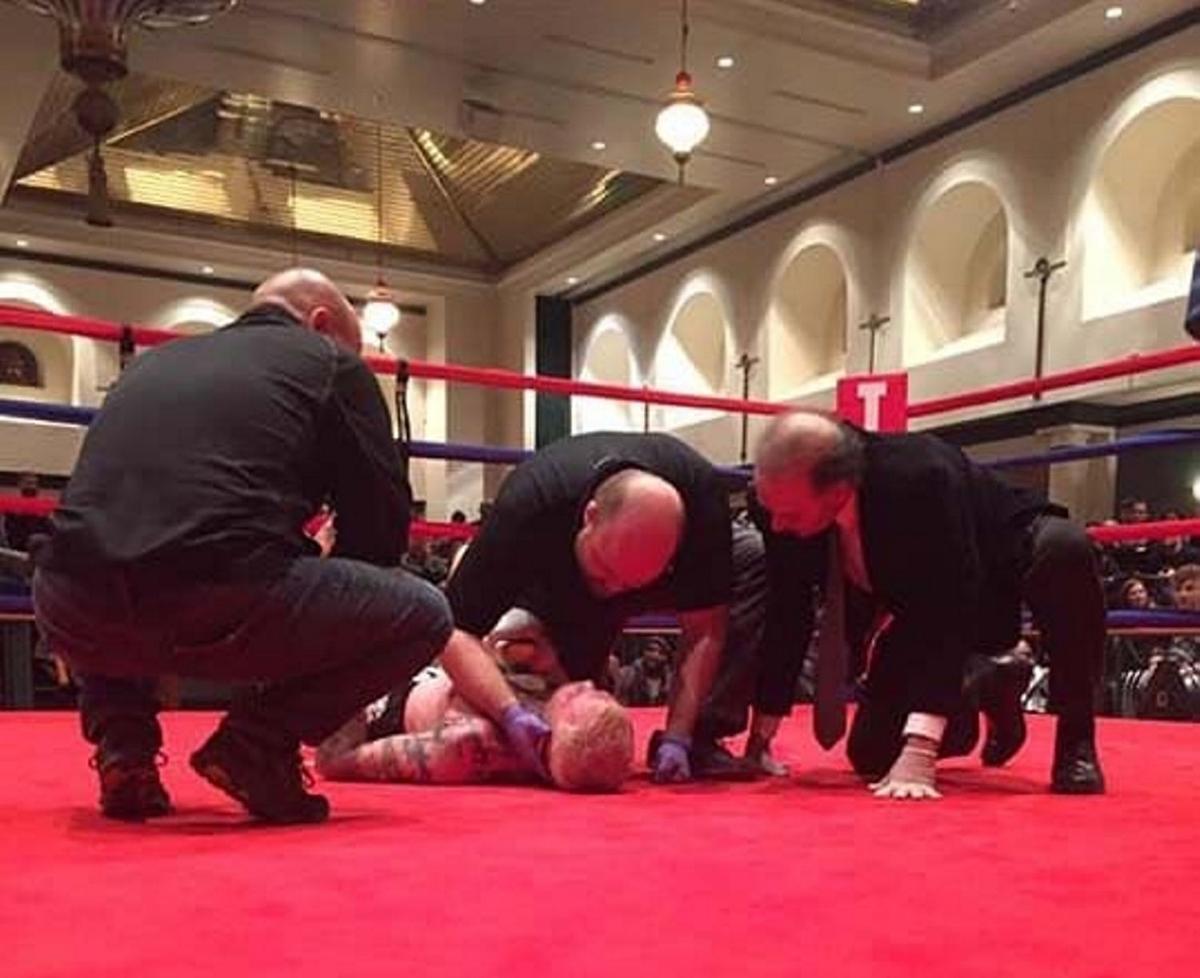 Daniel Cork photo Richie Cantolina on the canvas after getting knocked down by Hudson’s Dave Tomaso in their recent super-welterweight fight in Pennsylvania. 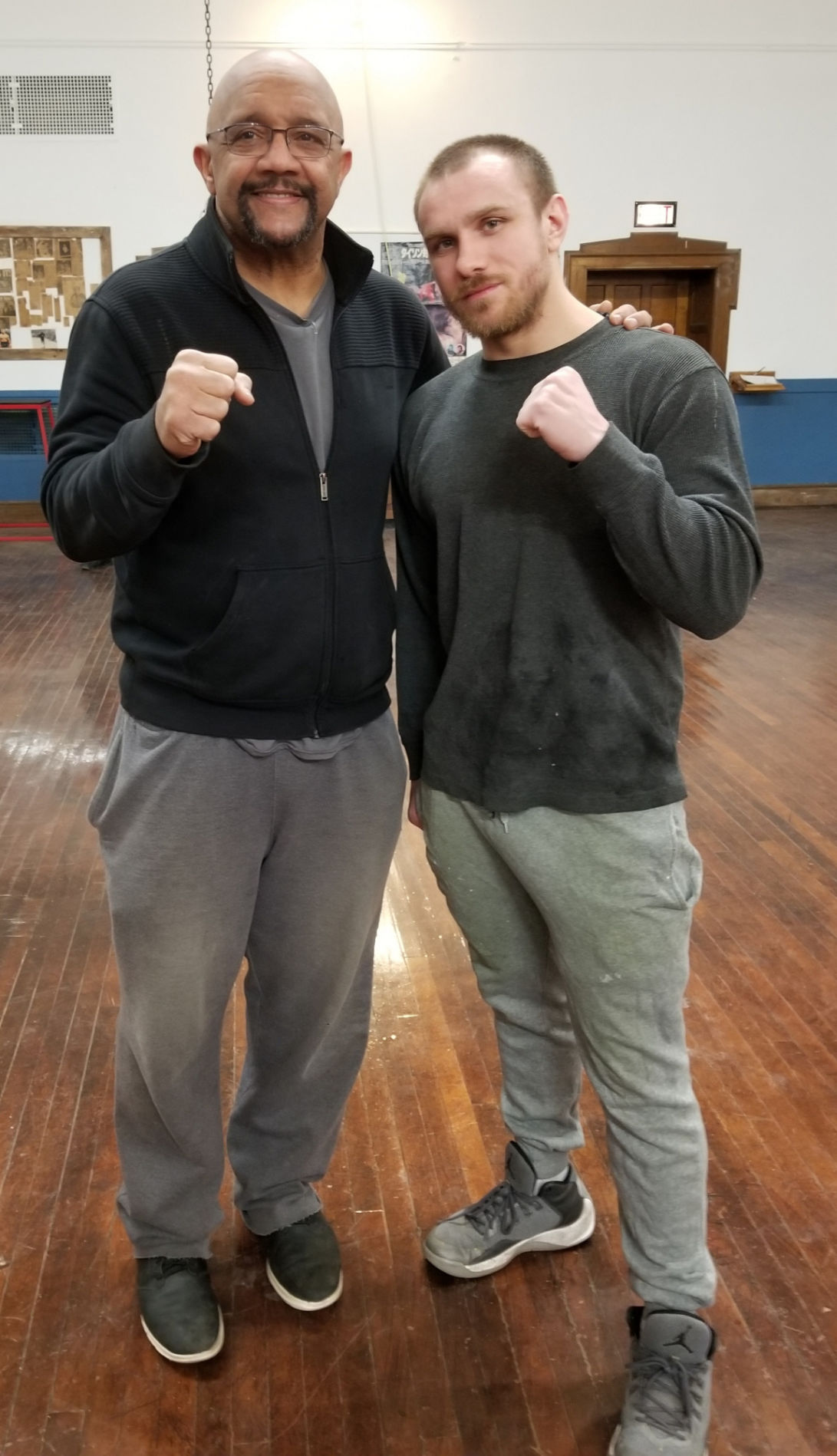 Daniel Cork photo Richie Cantolina on the canvas after getting knocked down by Hudson’s Dave Tomaso in their recent super-welterweight fight in Pennsylvania.

HUDSON — Hudson boxer Dave Tomaso has never been one to back away from a challenge.

So when unbeaten prospect Richie Cantolina (6-0, 2 KOs) of Pennsylvania called looking for an opponent, even though Tomaso hadn’t fought competitively in nearly four years and had to lose close to 25 pounds in three weeks, his only question was ‘where do I sign?’

The scheduled four-round super-welterweight bout, fought in Cantolina’s backyard of Cheswick, Pennsylvania on March 7, went the distance and was declared a unanimous draw. The decision was not without controversy.

In the third round, referee Tim Shipley ordered the fighters to break. After stepping back, Tomaso landed a crushing right hand that sent Cantolina to the canvas. Shipley ruled the punch was thrown during a break and wiped out the knockdown, ruling it an unintentional foul instead.

Cantolina was given as much time as he needed to recover and after 10 minutes the bout continued. The fight went the full four rounds, after which all three judges scored the fight 38-38.

The decision did not sit well with Tomaso or hs trainer Ernest Westbrooke.

“Everybody heard the referee say break and everybody broke,” Westbrooke said. “You don’t wait for the referee to say resume. They say break, you step back and like they tell you in the pre-fight meetings ‘protect yourself at all times.’ So he got knocked out, they revived him, let him recover and they called it a draw. I couldn’t believe it.

Tomaso said he just got caught up in the heat of the moment.

“I knew we got into a little clinch and they said break,” Tomaso explained “I hear him say break, but I was throwing the punch when he said break and that’s what happened. You’re in the middle of fighting and the adrenaline is going.”

Westbrooke felt the incident was not handled properly.

“The commission did the wrong thing,” Westbrooke said. “I’ve been training fighters since 1977 and been involved in boxing since I was 10. I have never seen someone get knocked out or laying on the ground and have multiple people checking on you to make sure you’re OK, be down there for eight to 10 minutes, then get him up, let him walk around and the resume the fight.

“His game plan was waiting until I got inside and he was throwing a bunch of pitty-pat punches,” Tomaso said. “He’s a taller guy and I was outboxing him on the outside. On the inside, he was giving me a problem where I was uncomfortable and then it came to the third round where he was tired and kept ducking down and I was just hitting him with the uppercut.

“He was grabbing me a lot and then toward the last minute of the fight I dropped him, but they let him get up and said it was a push. Then he went to grab me and I hit him with a three-piece combo and he staggered against the ropes and he was holding on to the ropes and the ref let him recover.”

Tomaso and Westbrooke immediately called for a rematch and it appears that their wish will be granted as Cantolina’s handlers have reached out and indicated they’d like to do it again in May, June or July.

“I’ll have more time to prepare for the fight so I’ll get more sparring in,” Tomaso said. “It seemed like he was waiting on me to get on the inside so I’ll try to get my reaction time better and do a lot of counters, but that’s what we do.

“We’re going to make this fight ugly. He can’t handle ugly fights. A lot of left hooks to the body. I saw he couldn’t take that in the previous fight.

Tomaso promises to be even better in the rematch.

“It was just a bunch of nerves and reaction time stuff,” Tomaso sad. “I saw things that I could do, but my body wasn’t reacting fast enough. I’m definitely coming more prepared this time and it’s going to be a six-rounder so I can definitey pick my shots a lot more.”

Tomaso said it felt great to be in the ring after a long layoff even with what he had to go through to make weight.

“They approached Westbrooke and gave me like three weeks to get ready,” Tomaso said. “I took off 23 pounds in three weeks. A lot of hot baths, I definitely changed my diet a lot, went out and got a nutritionist.

“I want vegetarian for awhile. I started eating meat again because the nutritionist said it was an easier way to just eat meat. I had to cut my meals down in half because I wasn’t really losing enough weight and we were getting close to the fight and I was getting nervous. They offered 152 to 158 and I asked them if they could get it to 163 and they said no. I was stressed, but the night befre the fight I stepped on the scale at 158, right on the point.”

“Once he broke 165 I knew he would make it,” Westbroke said. “We was hitting the mitts and he was strong and I told him ‘you can do this, Dave.’ It’s one thing to lose the weight, but it’s another to lose the weight if you’re not strong. You have to train while you’re losing the weight. You just can’t lose the weight.”

Despite the limited time to get ready, Westbrooke saw some things in Cantlina he knew Tomaso could exploit.

“I knew if we could get Dave strong and a little sharper we could beat that kid, all things being as they are,” Westbrooke said. “I saw two of his fights. He’s a tall gy that doesn’t fight tall. Sloppy, very poor form, not really a straight puncher, not a big puncher. He doesn’t use his jab properly and I knew if Dave could get inside this kid was going to have problems.”

Tomaso says the long layoffs between fights are over.

“I never wanted to stop,” he said. “What made me stop was working. When you’re working like 10-12 hour days, you get out of work and come to the gym, you don’t have the motivation. You just want to go home and go to sleep. And you’re always like ‘I’ll be back in the gym.’ Three years later, I’m back.”

Westbrooke wants to keep his fighter busy and focused in the coming months.

“I’ve seen Dave fight since he’s been an amatuer. He is one of the most pure fighters I have seen. He has an attitude for it and has always been so aggressive. But he’s mellowed out into a tremendous young man, a hell of a fighter and family man. This is something I did not anticipate. His record (1-3-1) is not indicative of who he is.

“David is fighting two weight classes above what he should be. Dave should be fighting at 147 in the pros. Dave’s strnegth, Dave’s punching power. He’s going to be knocking guys out when he gets to 147.

Westbooke said he and Tomaso will be moore selective when lining up fights in the future.

“We have to take it slow and just not take anything they offer us because he’s been an opponent. An opponent I’ll be, a victim I won’t,” Westbrooke said. “You’re not going to give me a guy with 150 fights, multiple amateur chamions, olympic trial guys. I’m not taking that. But if we have a chance to get 6 or 7 fights and Dave and I can work for a solid year, year and a half, he can be a contender.

Westbrooke is excited about Tomaso’s potential and feels that with consistent work he can quickly move up the rankings.

“A lot can happen in a year and a half if Dave and I have a consistent schedule,” Westbrooke said. “We have to be fair to the kid. He can make 147 and he’s tenacious. He will fight anybody. I’ve only had maybe 2 or 3 fighters with that kind of attitude. He does not care. Those are the additives to make a world champion or someone that can be in the top 10. It’s going to take time. I want him to be a little bit more defensive minded. He has a very good jab and we have to work on some combinations.

“We have to get better, get sharper, get more fundamentally sound. In order for him to make some serious money we’ll have to be on point with those things. We have to make people miss and make people pay. He has the capacity to do it. It’s just a matter of time.”

An Impossible Choice for Californians: Caregiving or Career