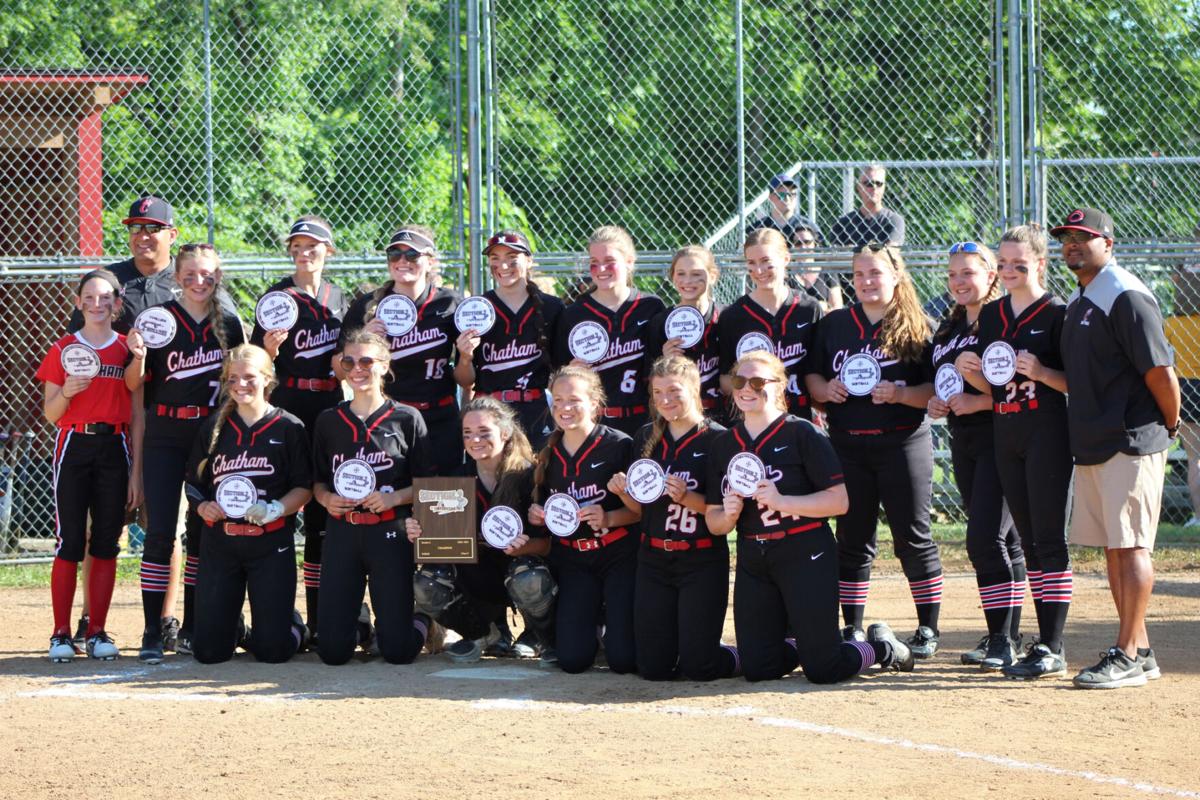 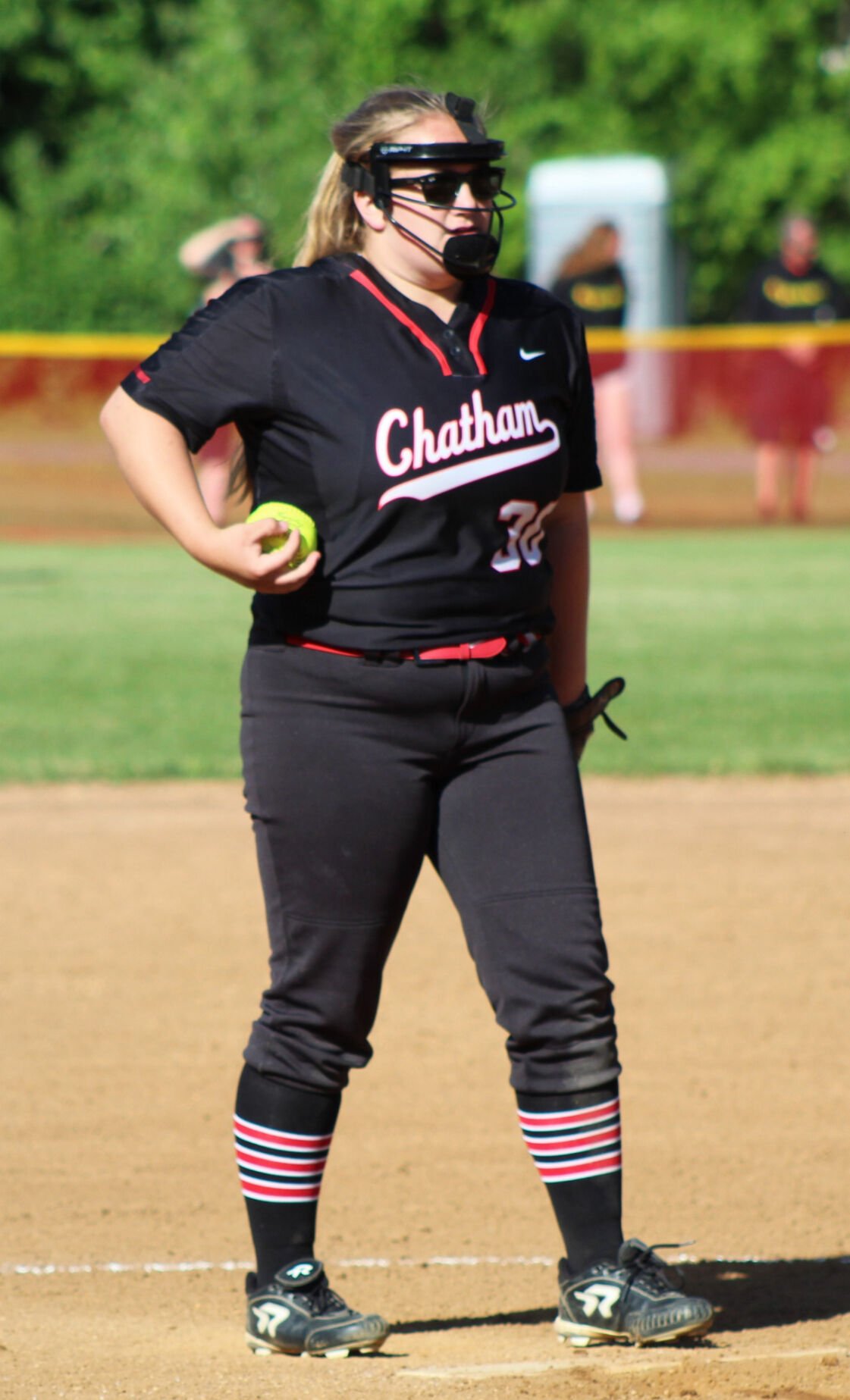 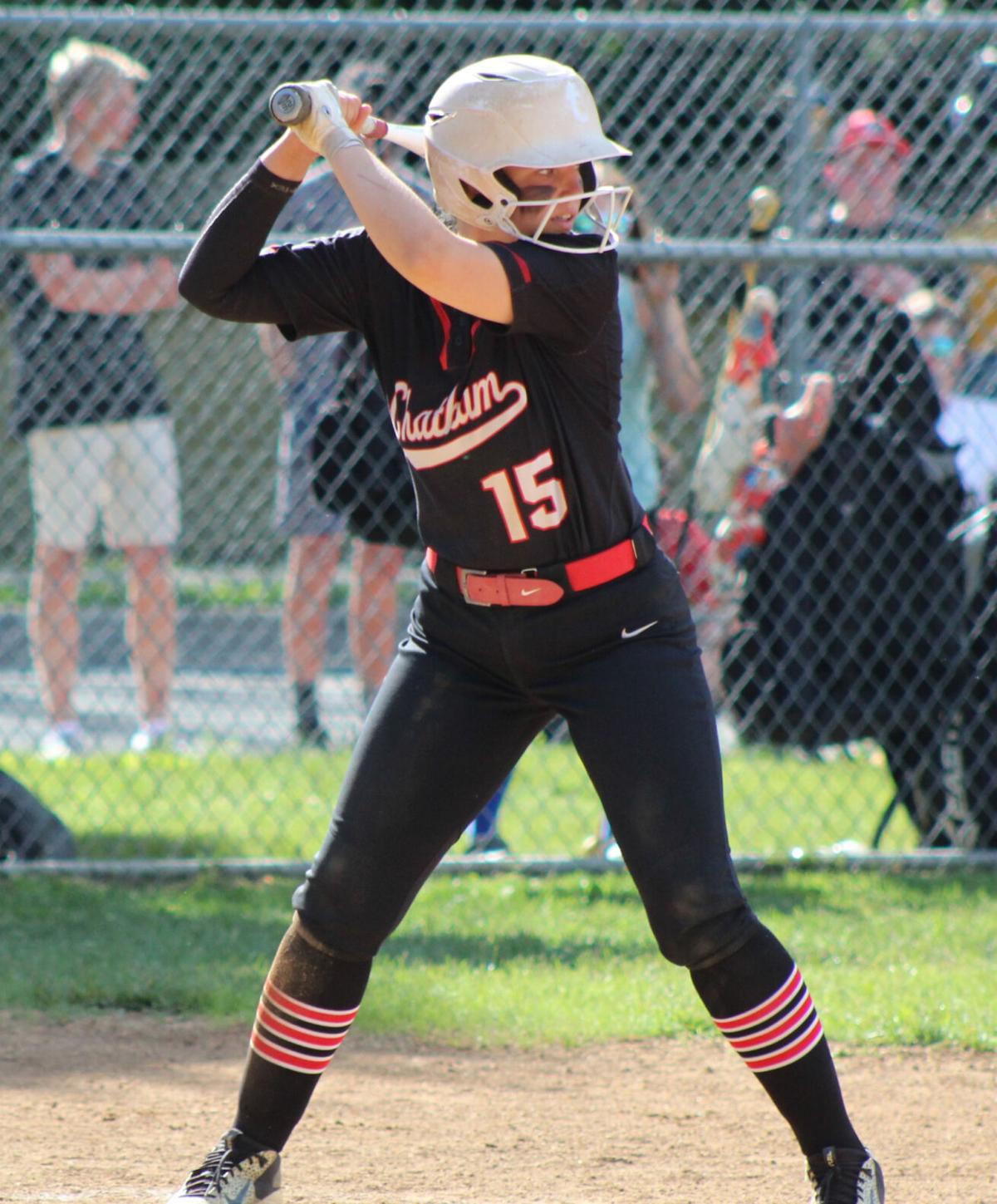 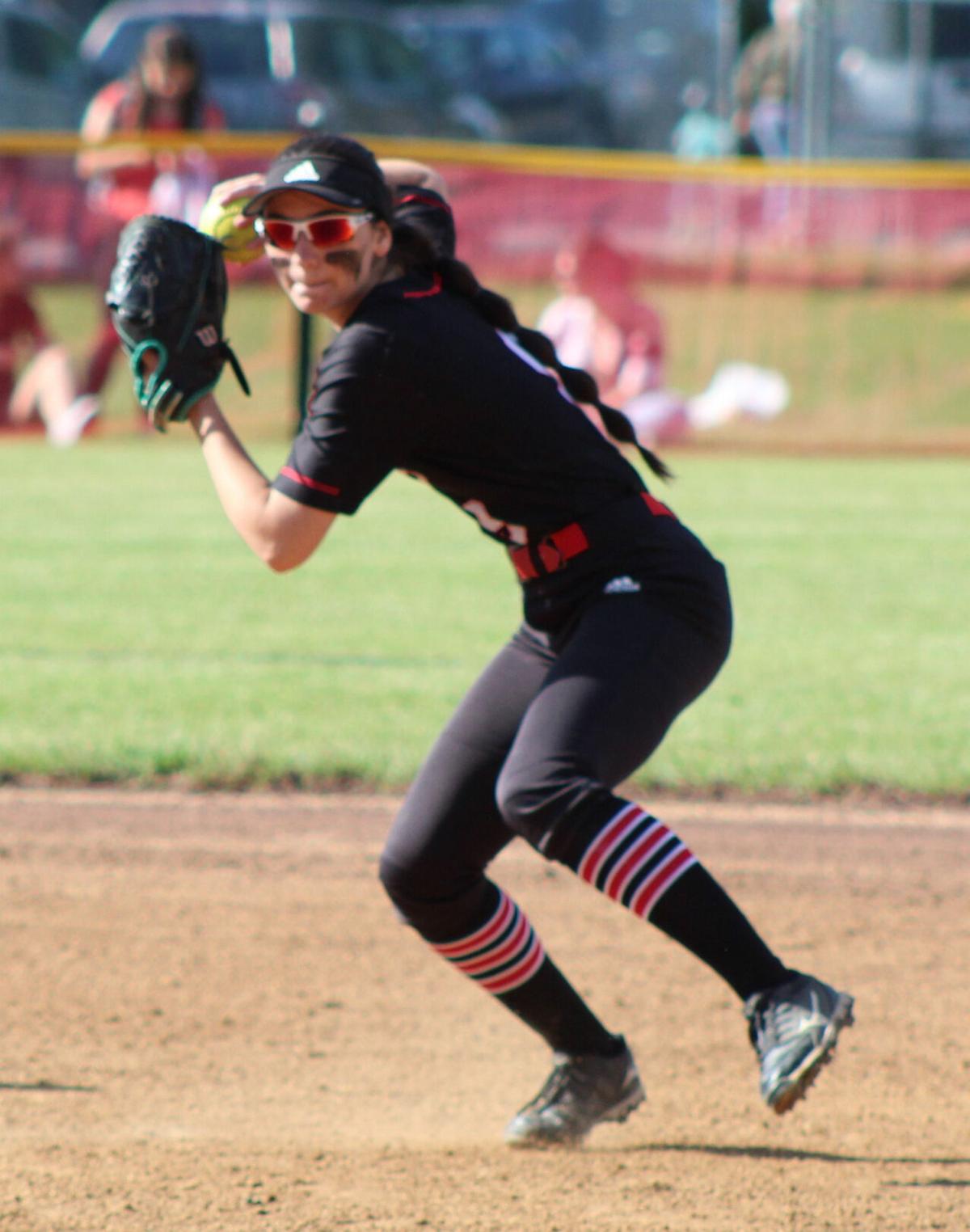 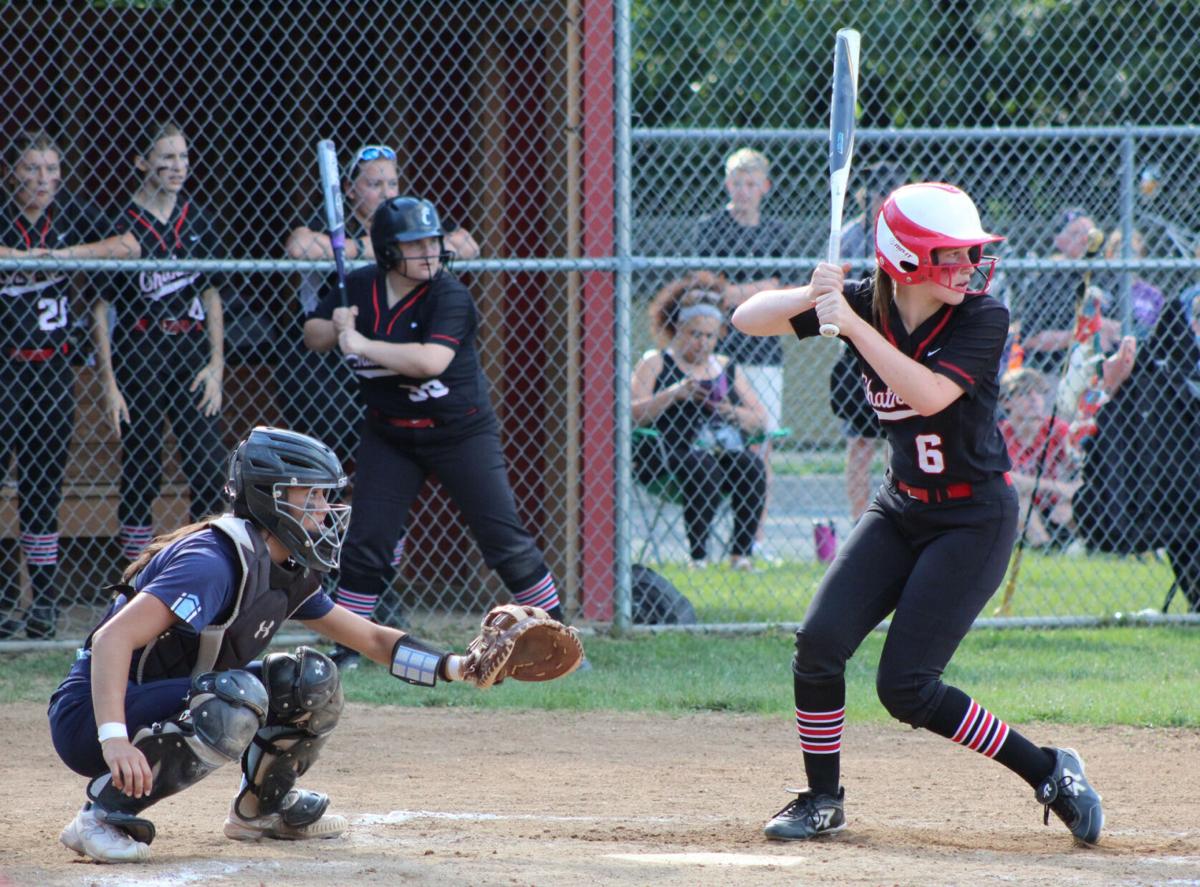 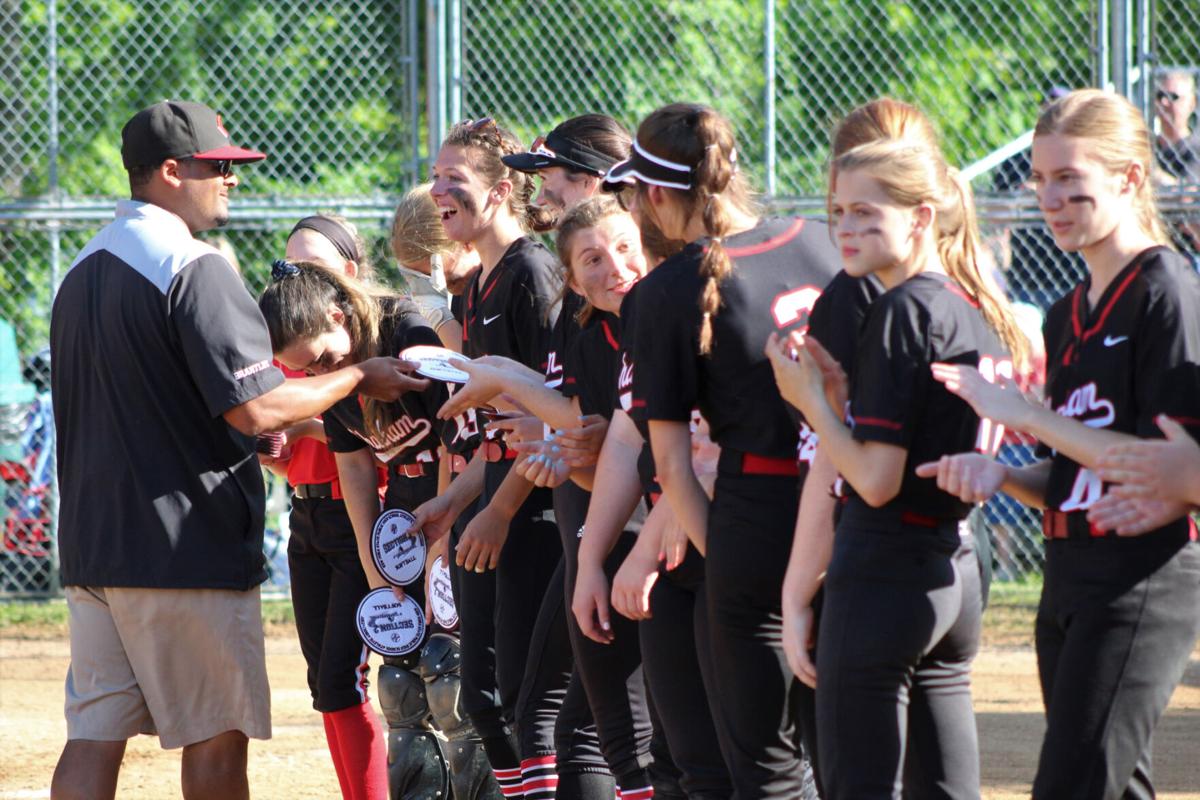 Emily Mesick threw another complete game to close out the season and give the Panthers the home victory. Madeline Gorey took the loss on the mound for Lake George, but holding Chatham to four runs was a massive accomplishment in and of itself.

Mesick was off to a good start, retiring the side in order in the first inning. Adryanna Jennings had a two out single in the bottom half, but Erin Madsen ended the inning with a groundout to second.

Mesick had another quick inning in the second, and the Panthers were back at the plate. Haley Pulver led off the bottom of the second with an infield single. Allyson Engel struck out for the first out, and the catcher tried to pick Pulver off of first on a snap throw but the ball hit Pulver in the helmet. She was slightly rattled but Pulver shook off the hit and stayed in the game.

Olive Mountain got aboard with a single to bring up Mesick with two runners on. Mesick hit a pop up that probably would have curved foul after it fell, but Gorey tried to catch it just off the pitcher’s mound and she dropped it in fair territory and everyone was safe on the play to load the bases. Hannah Kelly hit a swinging bunt back to Gorey and she fielded and threw to home to get the lead runner for the second out.

Chatham then took a 1-0 lead when Hannah Taylor was hit by a pitch that scored a run, and extended their lead to 3-0 on a two run single by Abby Taylor.

Jennings came up and hit a soft pop up just behind the second base bag that should have been the third out. However there was miscommunication between the Warriors’ second baseman and the shortstop and the ball dropped between them and another run scored to make it 4-0 Panthers.

Mesick had her first trouble of the game in the third when she hit the first batter of the inning and gave up a one out single. Olivia Gates came up and hit an RBI single to drive in the Warriors’ first run and cut the lead to 4-1.

After Rachel Jaeger popped out to the catcher for the second out, Tyler Bergman hit a deep fly ball to center field that was the hardest hit ball of the afternoon. If it was not for Abby Taylor’s height it could have been a game tying three-run homer, but Taylor tracked and caught it for the third out of the inning just in front of the center field fence.

“That was big play in the game,” Chatham coach J.B. Brantley said. “That would have tied the score.”

Mountain had a single with two outs in the bottom of the frame, but was erased when Mesick grounded out to end the inning as the game’s pace quickened.

With one out in the fourth, Mesick induced a ground ball back to herself and, after a slight bobble, fired to first base in time for the second out. Gorey came up and hit a double to try and start a rally, but Pulver backpedaled to make a catch on foul pop behind third base for the last out of the inning.

Hannah and Abby Taylor both made it to scoring position in the bottom of the fourth with just one out. But neither of them crossed the plate after a pop out and a groundout that ended the inning.

Lake George had a runner on a second with two outs the following inning and a little bit of controversy ensued. Jaeger was hit by a pitch, and the home umpire somehow ruled her out to end the inning and Chatham started back to their dugout.

After time was called, the umpire partially reversed his decision, calling the pitch a ball instead of an out because Jaeger did not make an attempt to avoid getting hit. The Panthers got out of the inning anyway when Mesick struck her out.

Ahead to the bottom of the sixth, Chatham looked to add some more insurance runs and Hannah Kelly hit a one out single. After reaching second base on a wild pitch, Kelly was stranded there thanks to a pop up and line out by Hannah and Abby Taylor. The Panthers were now three outs away from a section title.

Mesick gave up a leadoff base hit by Gorey as the Warriors had a last chance to tie the game. Mattison Stark laid down a puzzling bunt, with Lake George down by three runs, and she reached on a bobble by Pulver as she ran in from third to field the sacrifice attempt. However, with no time to throw to first, Pulver swiveled back to third base and fired to fielder covering to nail the runner who got greedy and was tagged for the first out.

Makena Barber then popped out in foul territory to the left of first base and the Warriors were down to their last out. Samantha Gorey came up and Mesick forced another pop up, this time to Pulver at third, and Haley Pulver squeezed it for the final out and sealed the 4-1 win and the Chatham Panthers took home the 2021 Section II Class C Softball Championship.

“To be able to salvage a season and be able to have sectionals was a great opportunity and I’m proud of the girls, especially the seniors that have been with me a lot of years,” Brantley said. “It was a good thing to see them finish their high school careers as a Section II title winner, and being able to win it in front of their home fans hasn’t been done before. It was a great opportunity to have and they took advantage of it.”

Brantley praised the work of pitcher Emily Mesick, who struck out two and didn’t walk a batter.

“Kudos to Emily, who threw a gem,” Brantley said. “She hit her spots and induced tons of pop-ups. We limited mistakes and she gave us an opportunity to win the game. This is her first varsity year as a tenth-grader and it was great to see her buckle down and pitch a heck of a game.”

Chatham finishes with an 18-1 record and have now won two straight Section II Class C championships after falling in the title game in 2018.

“I’m fortunate an blessed to have these girls that are softball-first kids,” Brantley said. “I really don’t have to do a lot of motivating, really, because they want to do well just as much as I want to do well, as far as being a part of something successful.

“I’m proud of the fact that they were together as a team, they supported each other, they knew when to pick each other up and a lot of that is because of those seniors I’ve had that have been through the good times and some tough losses, too, making them experienced in those types of situations and that’s rubbed off on some of our younger kids.

“I’m extremely proud of how they stayed focused. They put out their first goal of winning the league and then they wanted to compete at sectional level and they achieved both.”