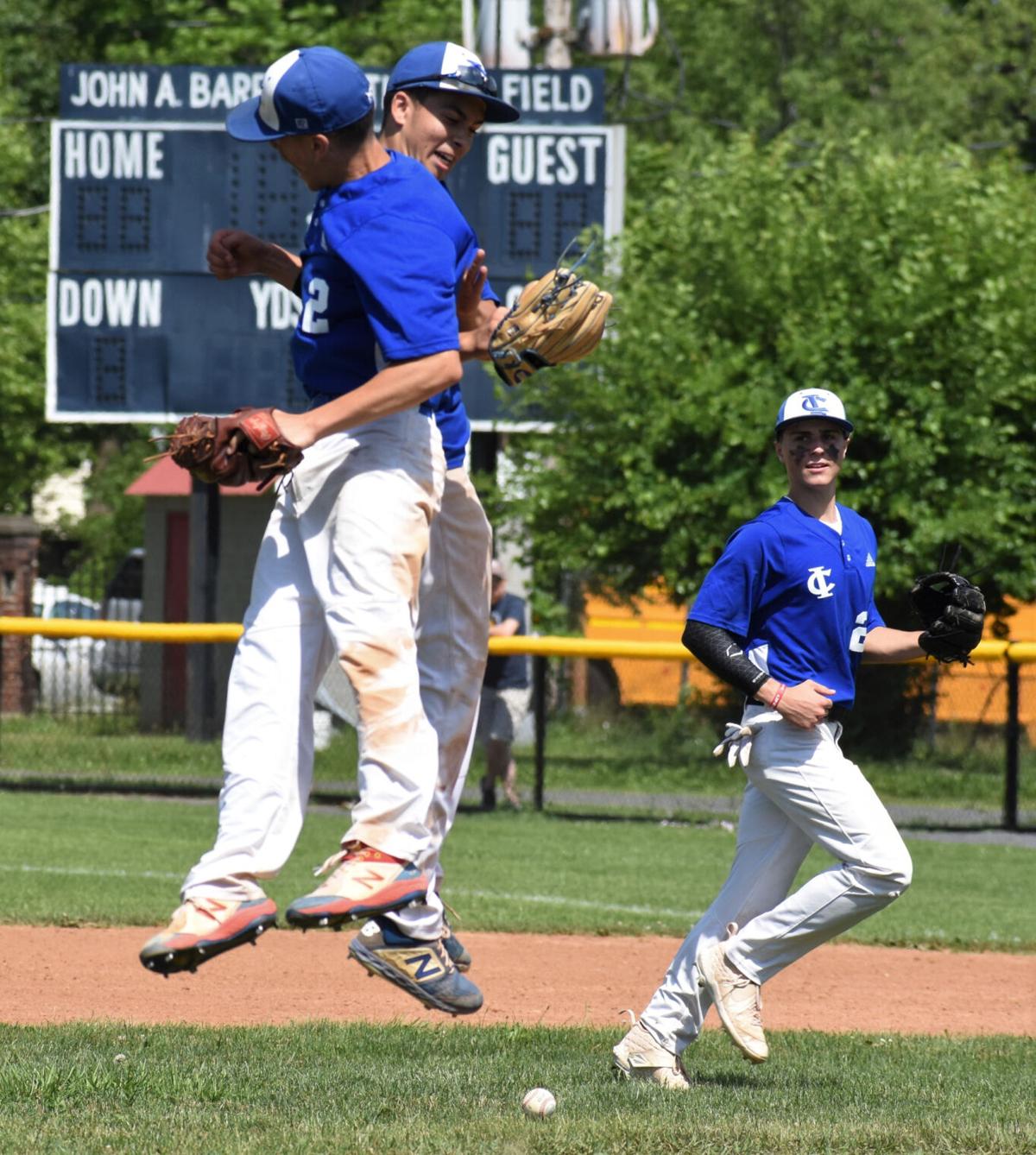 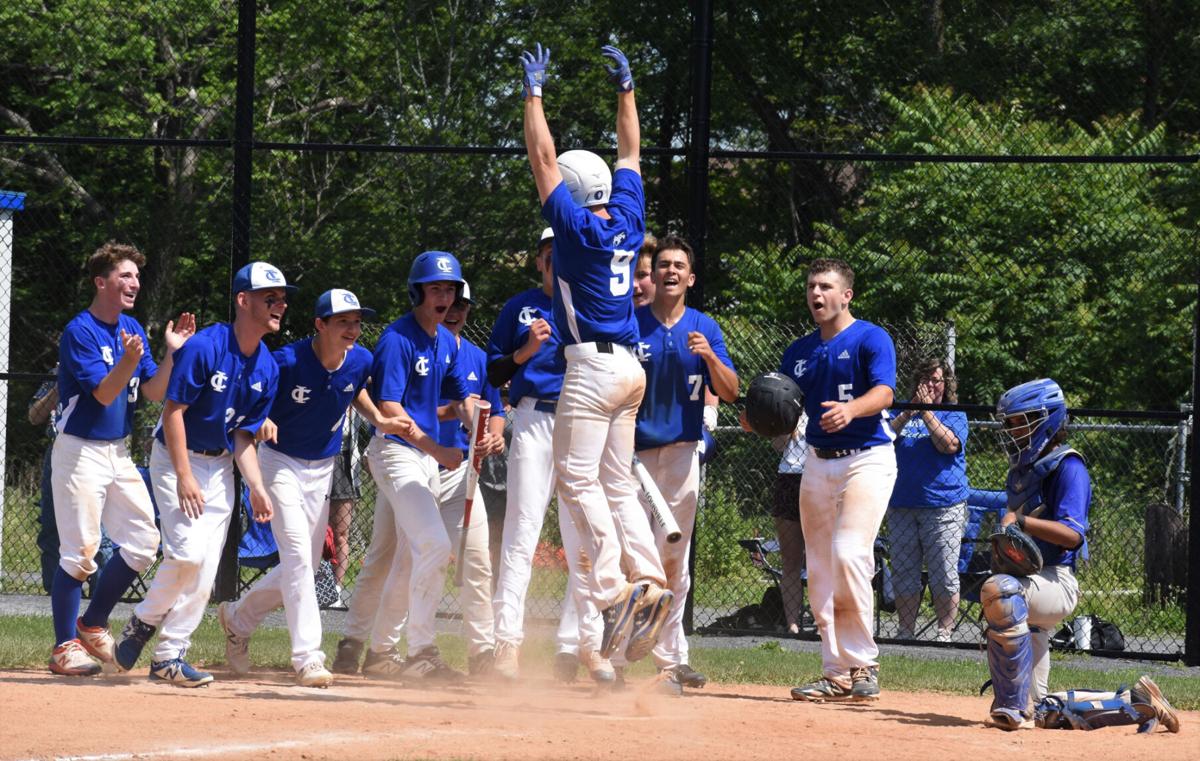 Tim Martin/Columbia-Greene Media Ichabod Crane’s Connor Bailey (9) is greeted at home plate by his teammates after hitting a two-run homer in the top of the seventh inning of Saturday’s Section II Class B semifinal against Hudson at Montgomery C. Smith Elementary School. 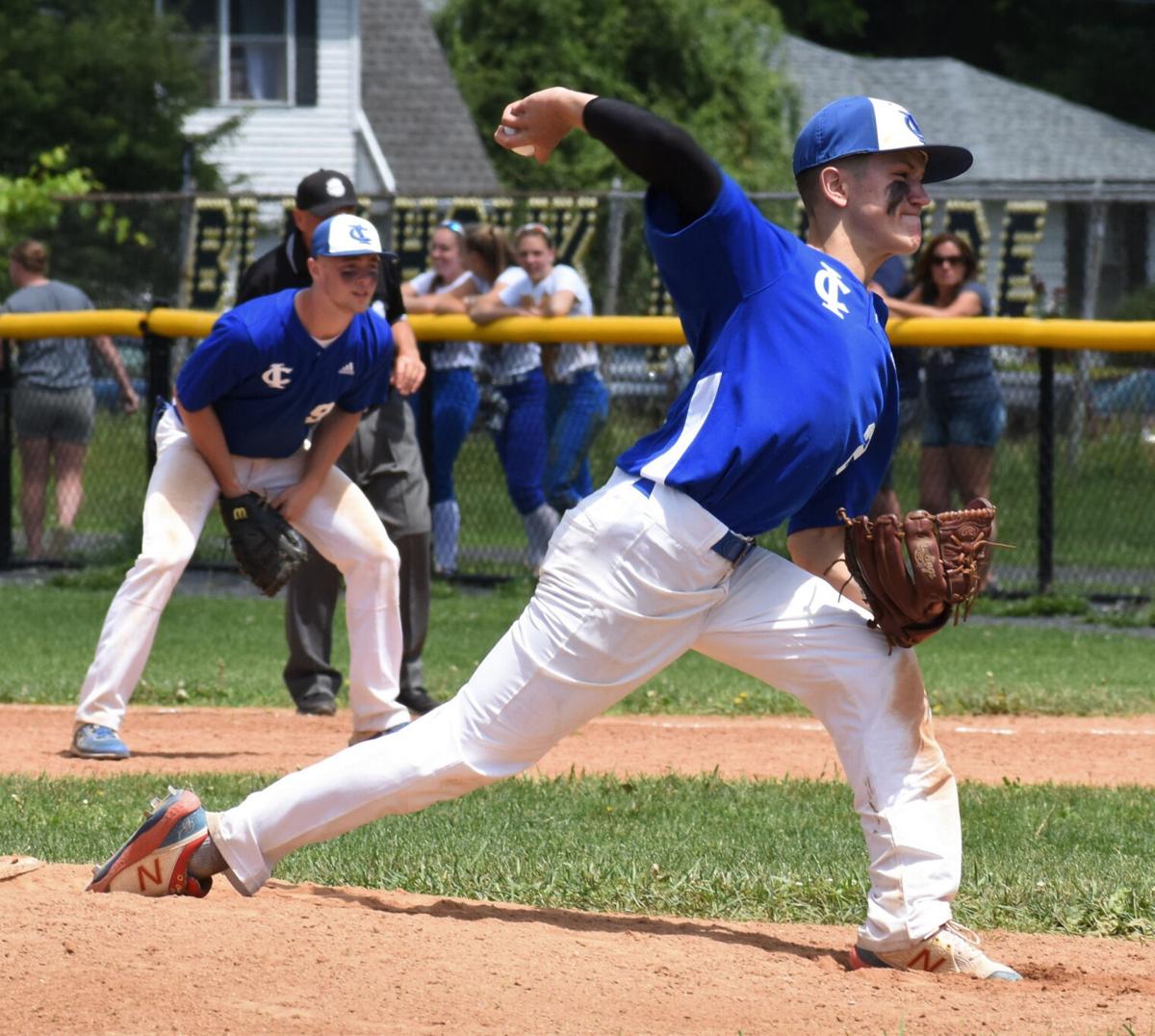 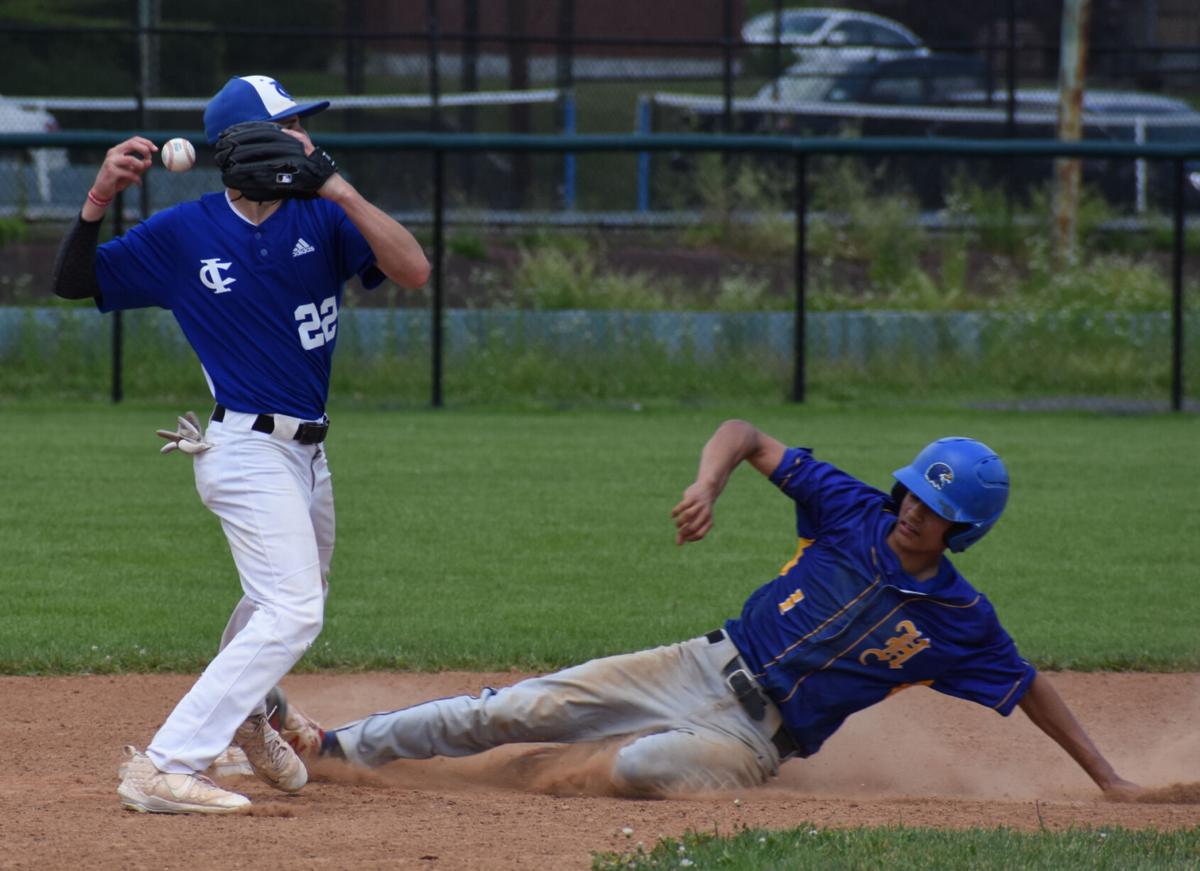 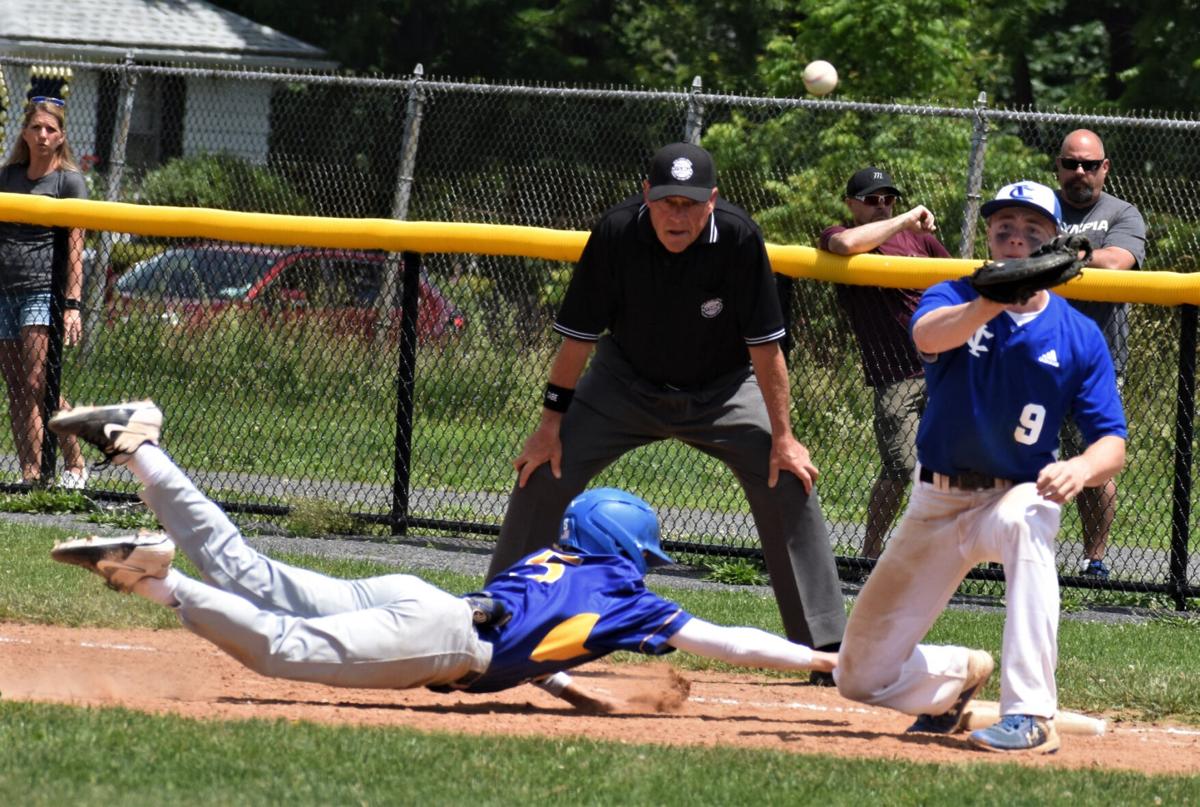 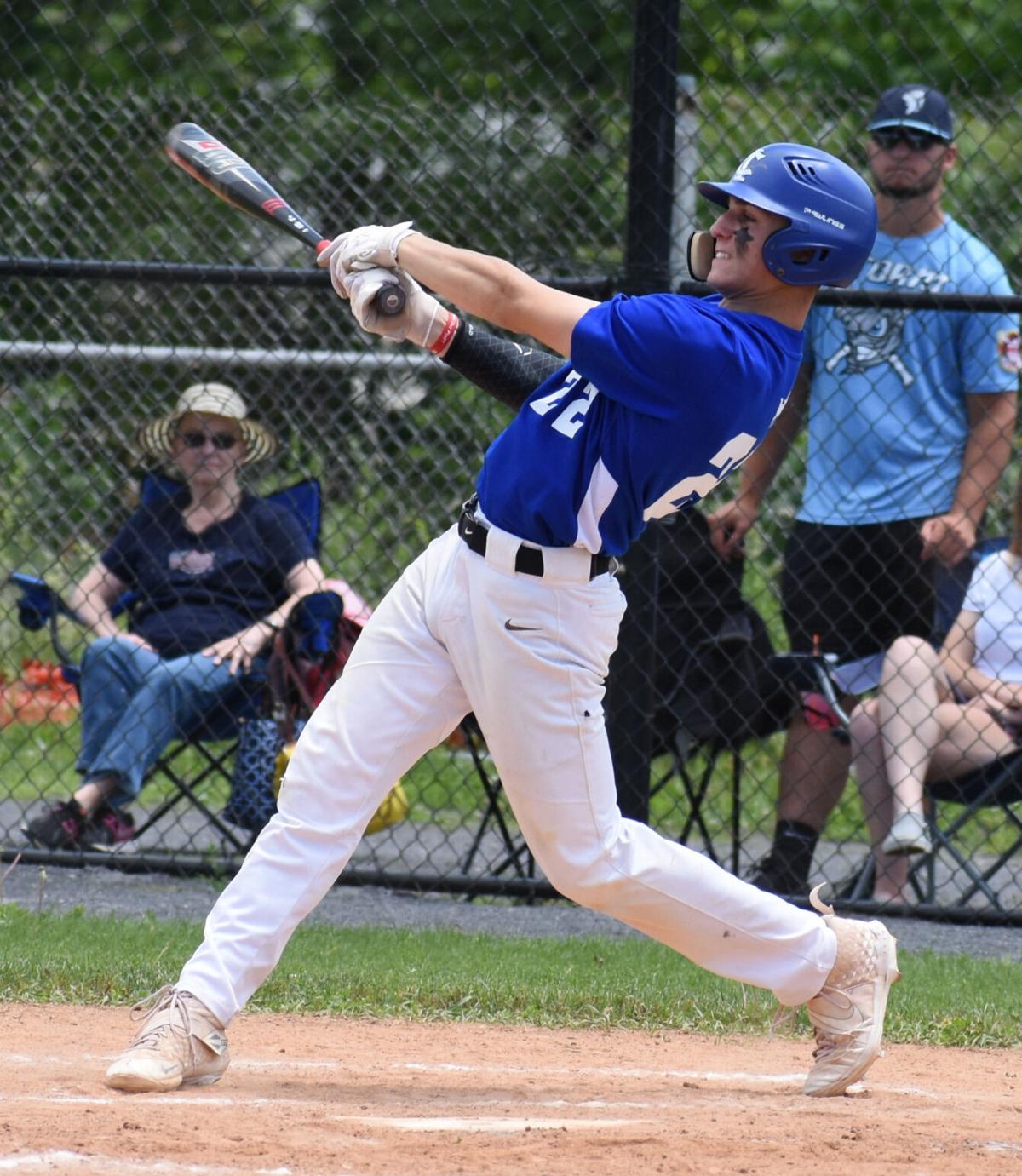 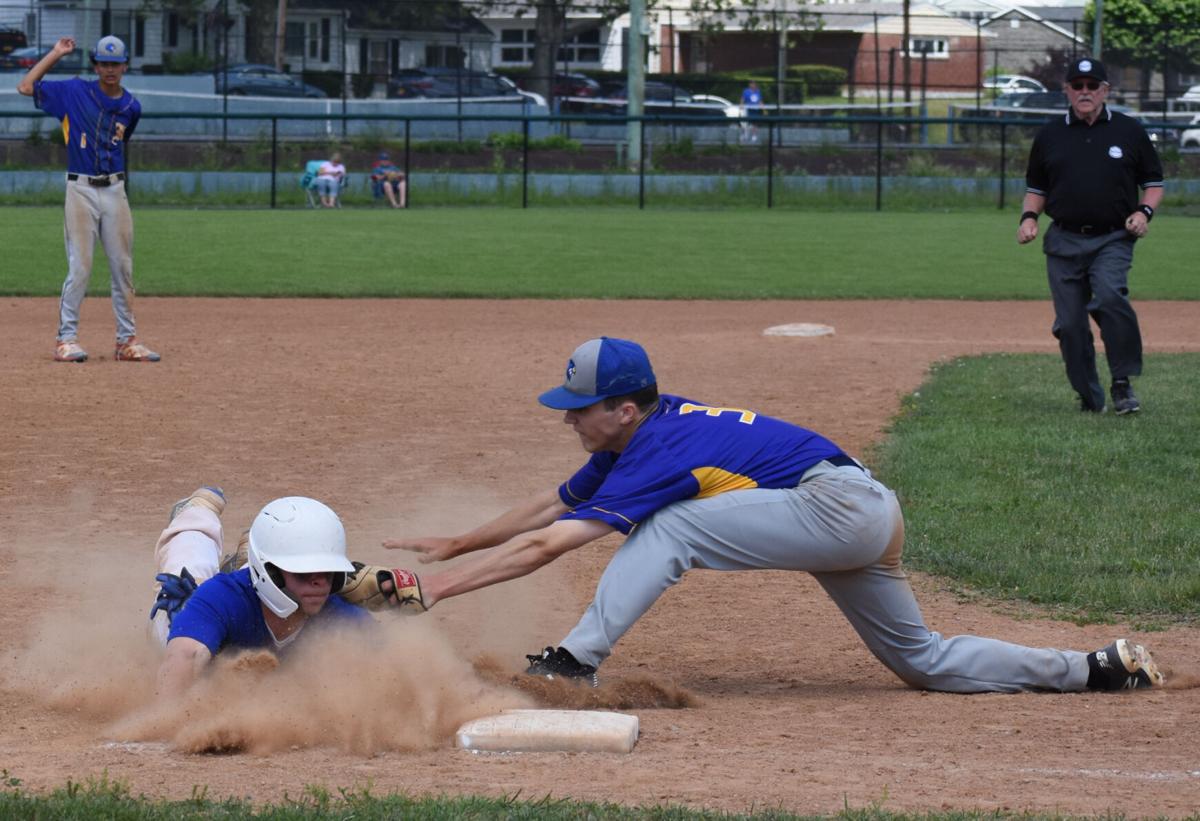 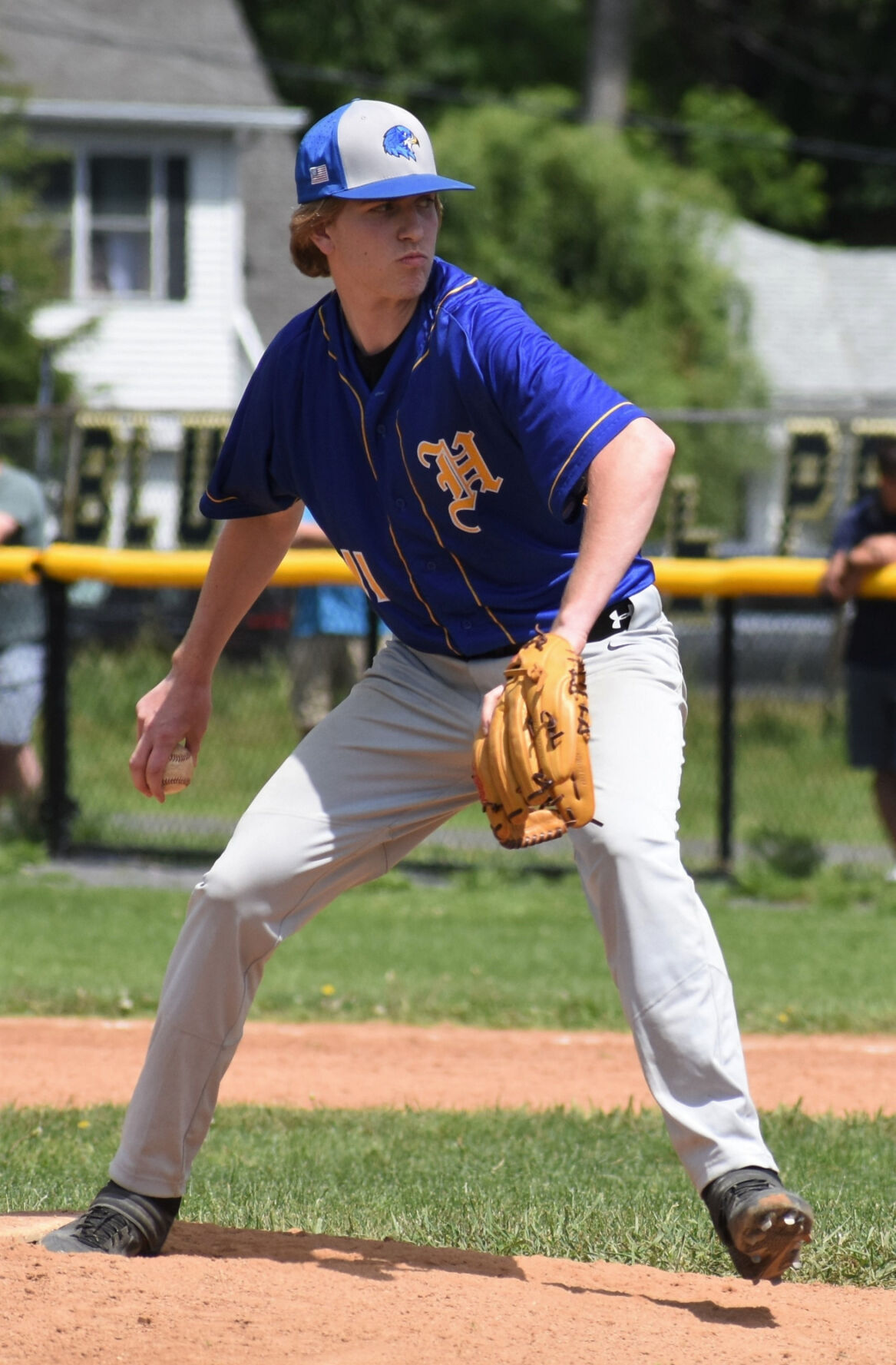 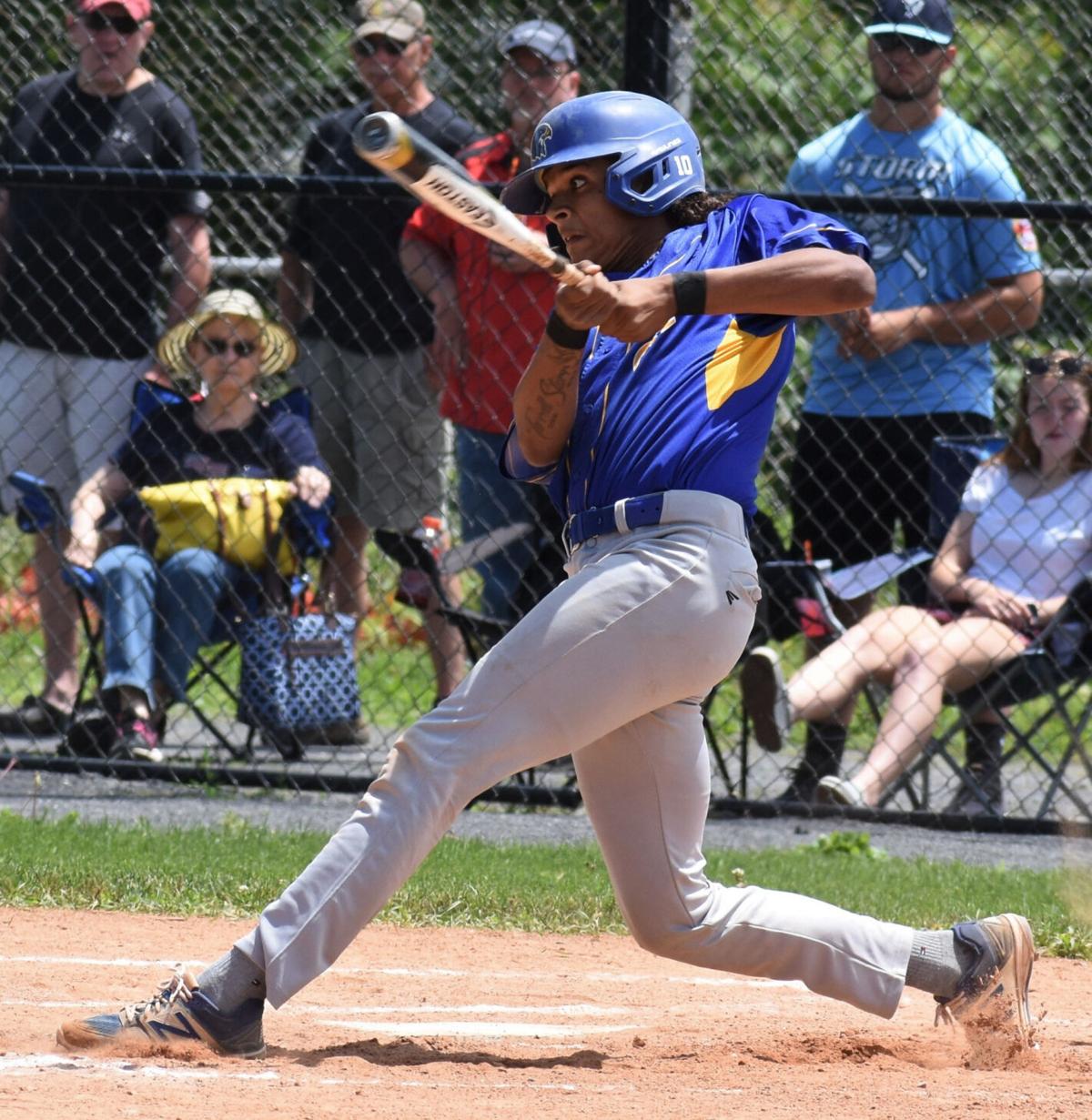 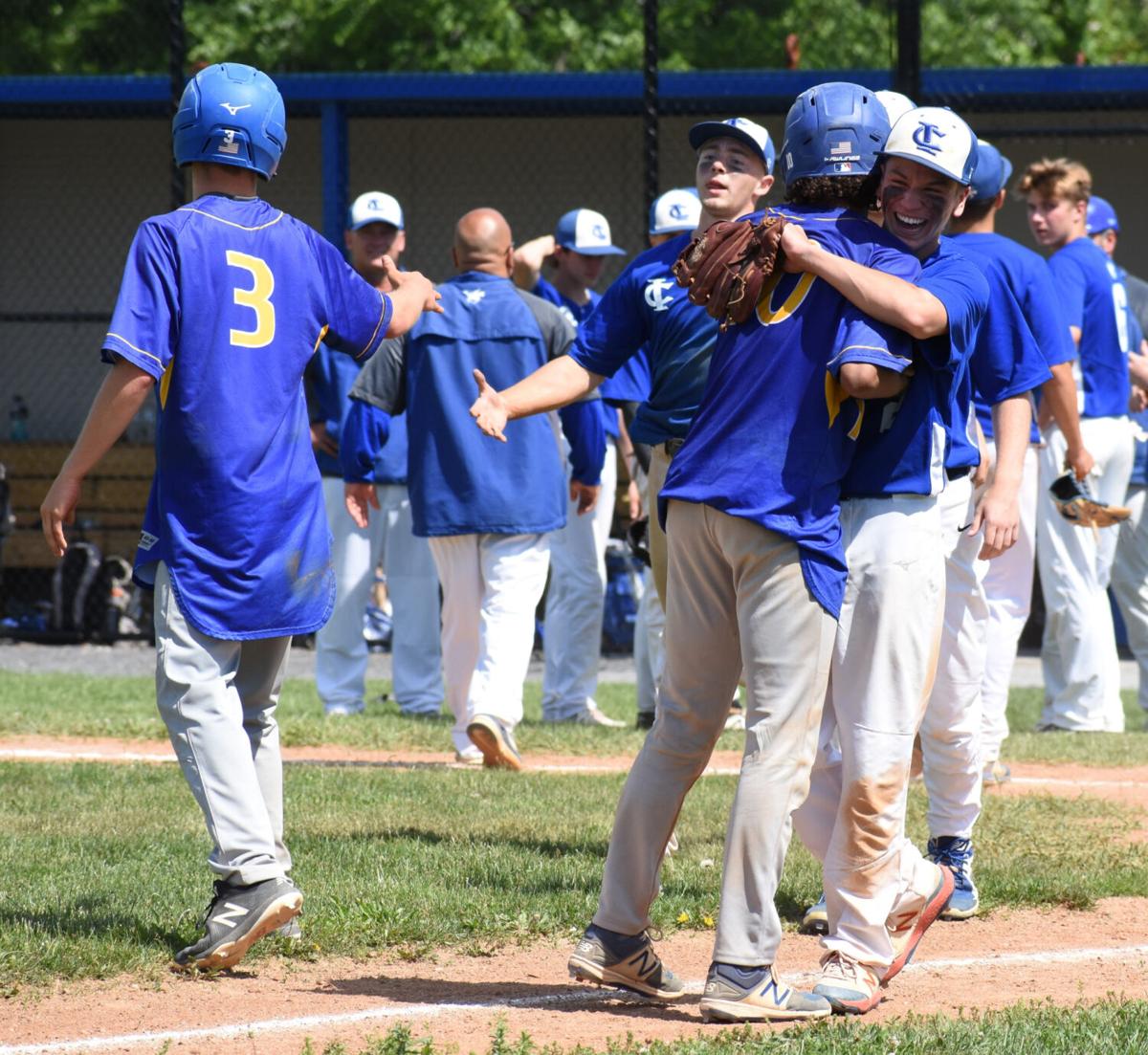 Tim Martin/Columbia-Greene Media Ichabod Crane’s Connor Bailey (9) is greeted at home plate by his teammates after hitting a two-run homer in the top of the seventh inning of Saturday’s Section II Class B semifinal against Hudson at Montgomery C. Smith Elementary School.

HUDSON — Ichabod Crane will play Broadalbin-Perth on Tuesday at 4 p.m. in the Section II Class B baseball championship game.

The No. 5 Riders earned a spot in the title game against the No. 2 Patriots with a hard-fought 12-8 victory over Hudson in Saturday’s semifinal at Montgomery C. Smith Elementary School. Broadalbin-Perth edged Schalmont, 11-10, in nine innings in the other semifinal.

Ichabod Crane trailed 2-0 after one inning, then after taking a 4-2 lead in the second, fell behind 5-4 after Hudson plated three in the bottom of the third.

The Riders took the lead for good in the fifth with a five-run uprising on an RBI single by Brady Holzhauer, a bases-loaded walk and a three-run double off the bat of Justice Suafoa.

A bases-loaded walk in the sixth made it 10-5, before Hudson mounted a comeback. The Bluehawks scored three in the sixth to narrow the gap to 10-8, with Zack Bernockie’s two-run single the key blow in the inning.

But just when it seemed momentum was shifting to Hudson’s side, Connor Bailey blasted a two-run homer into the center field bleachers in the top of the seventh to boost the Riders’ lead to 12-8.

Hudson had one final chance in the bottom of the seventh, putting two runners on, but Holzhauer, who relieved starter Topher Pelesz, got out of the jam without allowing a run, preserving the Riders’ victory.

Justice Suafoa led Ichabod Crane’s 11-hit attack with a triple, double and single and four RBI, Bailey went 2 for 2 with a home run and single, Gunnar Grethen-McLaughlin and Jack Mullins each had two singles and an RBI, Holzhauer singled and drove in a run, Satchel Baumgartner singled and Pelesz and Nate Garafalo both drove in a run.

Pitching on two days rest, Pelesz threw 5 2/3 innings, striking out seven, walking three and allowing eight runs and 13 hits. Holzhauer finished up, striking out one and walking one while surrendering two hits.

“Topher Pelesz was very effective keeping a great hitting Hudson team at bay,” Riders’ coach Brian McComb said. “Justice Suafoa and Connor Bailey provided our offensive charge and we were able to capitalize with runners on base to seal the win.”

Kasey Moore was a perfect 5 for 5 at the plate, for Patroon Conference champion Hudson, collecting two doubles and three singles with an RBI. Zack Bernockie added three singles and two RBI, Matt Bowes and Tanner Race both had two singles and an RBI, Vic Gorman singled and drove in a run and Isaiah Maines and Connor Tomaso each had a single.

Jordan Moon, Maines and Caleb Romano all pitched for Hudson, combining for seven strikeouts and 12 walks while allowing 12 runs and 12 hits.

Ferrer and Mollo combined for the win, striking out 11, walking six and allowing nine runs and 13 hits.

Germantown will host Fort Ann for the Section 2 Class D championship on Tuesday at 4 p.m. at Bard College.

CHATHAM — Brendan Lamby scored on Matt Syvertson’s sacrifice fly in the top of the eighth to break a 4-4 tie and Lake George held on to edge Chatham, 5-4, in Saturday’s Section II Class C semifinal.

Chatham led 4-2 after six innings, but Lake George evened the score with two runs in the top of the seventh to send the game to extra innings.

Lamby came on in relief for Lake George and got the win, striking out four and allowing just one hit in 3 2/3 innings.

BROADALBIN — Mike Magliocca threw a three-hit shutout with 10 strikeouts as No. 2 Broadalbin-Perth defeated No. 7 Greenville, 1-0, in Friday’s Section 2 Class B quarterfinal.

The Patriots scored the only run of the game in the bottom of the second when Luke Tambasco walked, when to second on Ryan Savoie’s fly out, took third on Jake Pavone’s ground out and scored on a passed ball.

Edmonds had two of Greenville’s three hits, both singles. Joe Domermuth also singled for the Spartans.