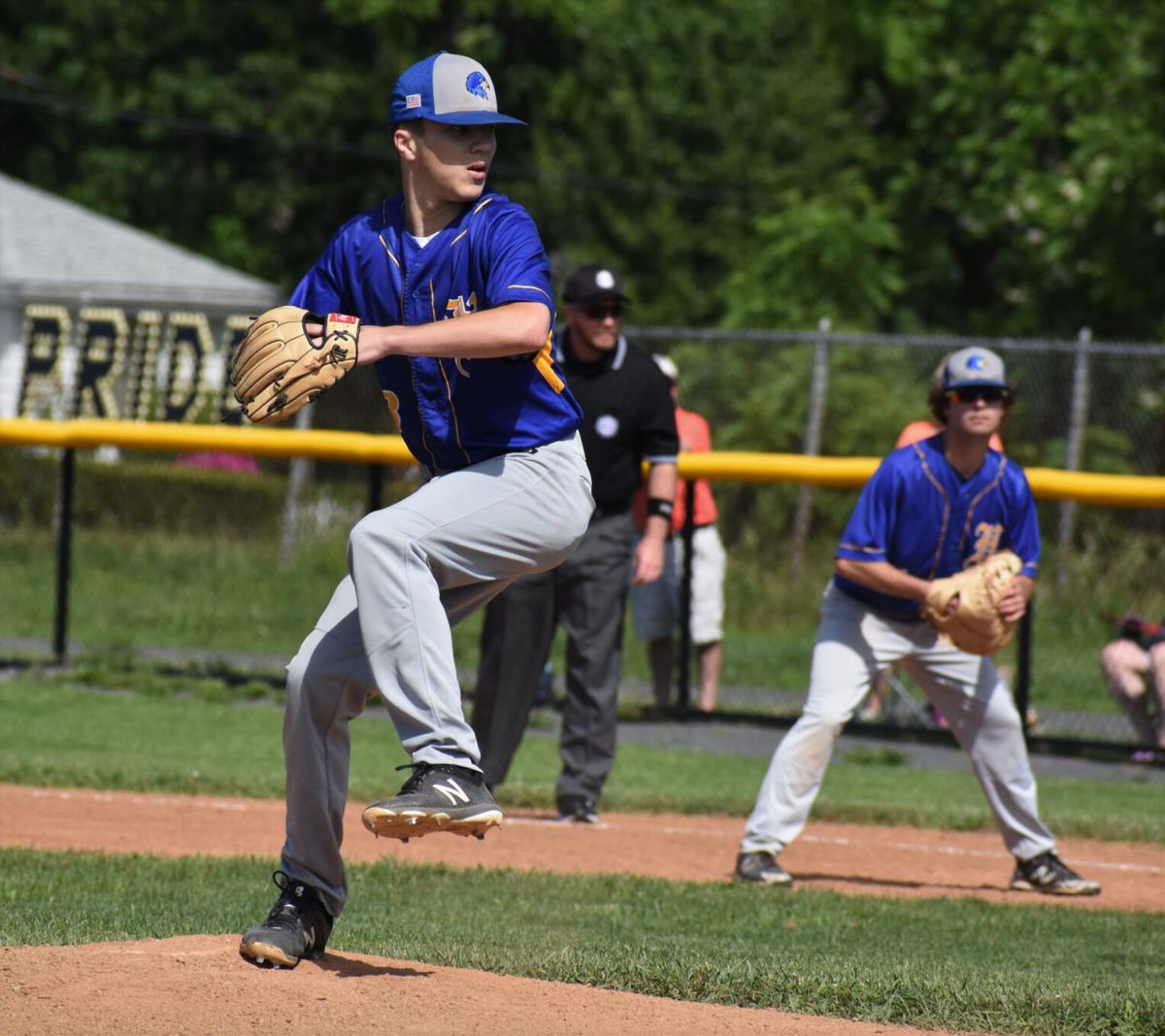 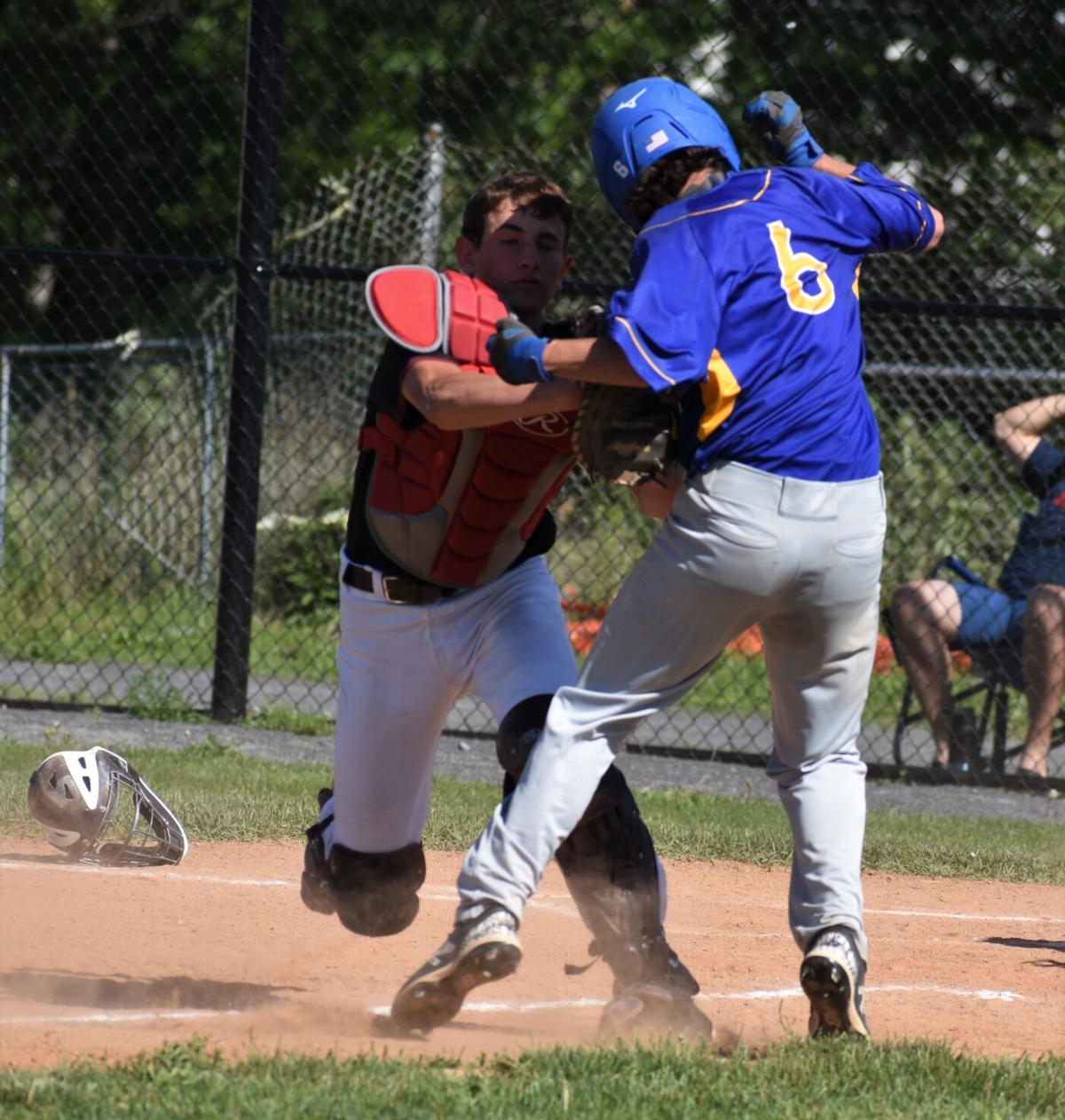 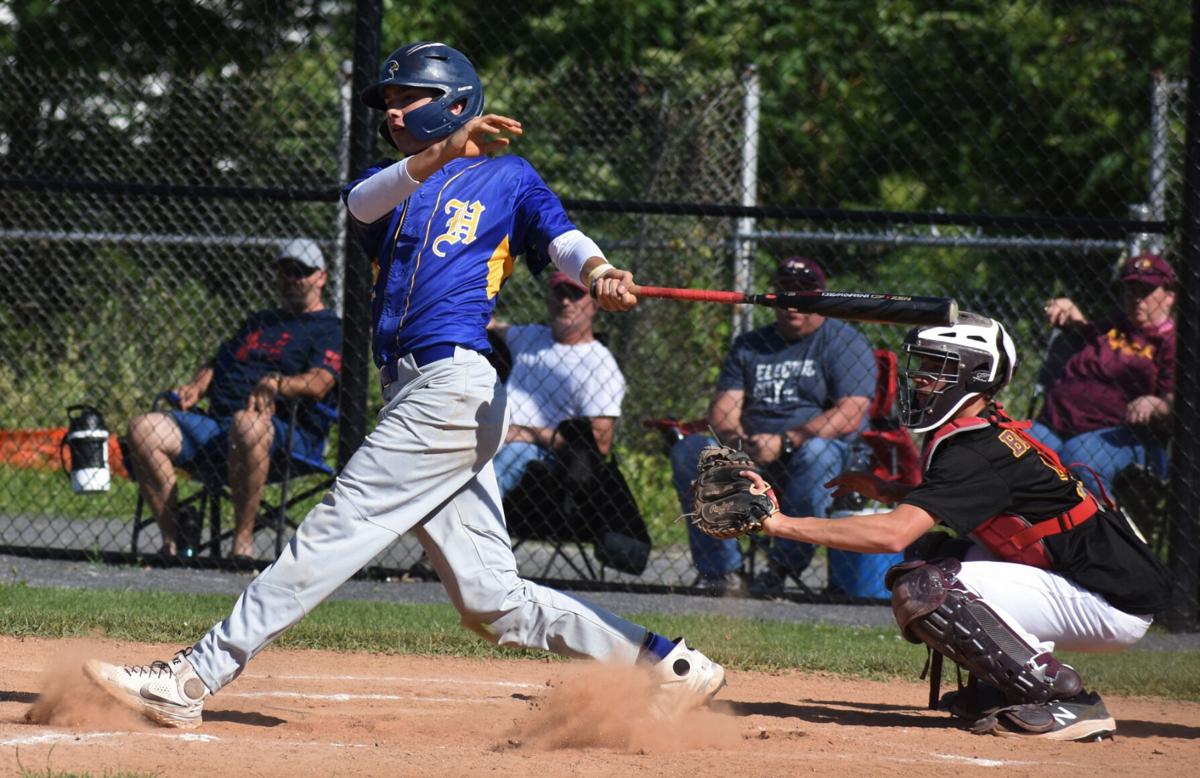 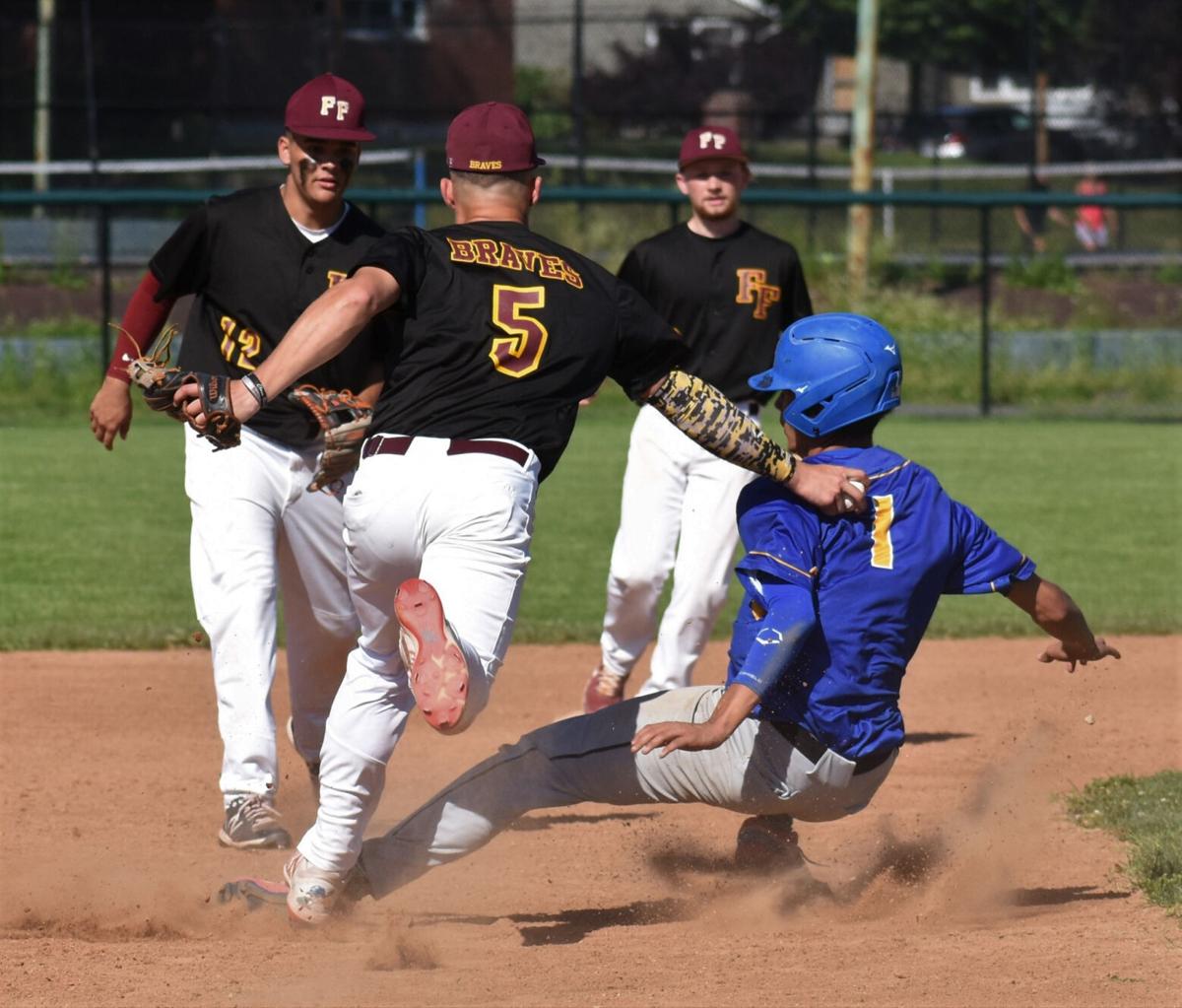 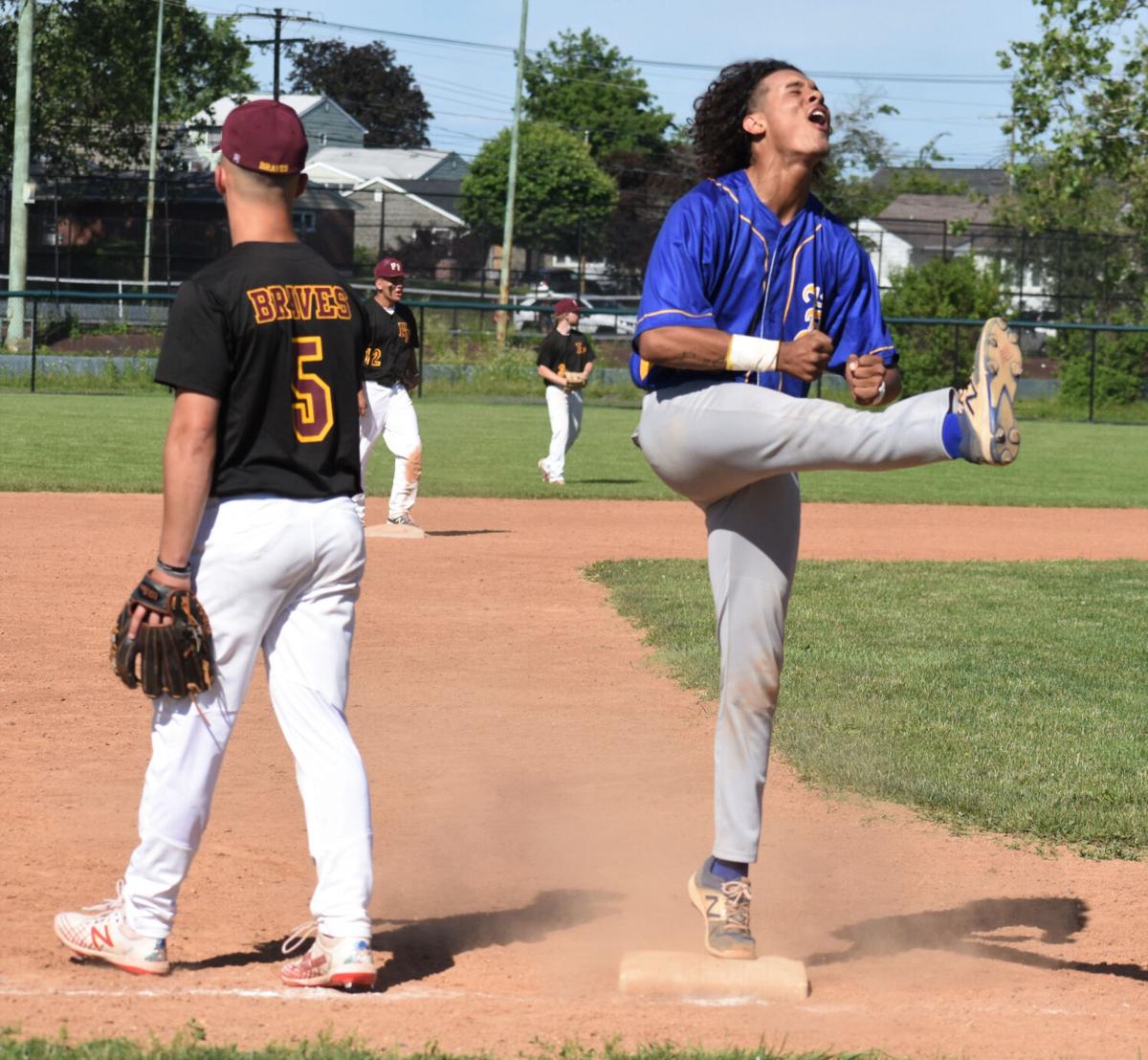 Tim Martin/Columbia-Greene Media Hudson’s Vic Gorman reacts after pulling into third base with a triple during Thursday’s Section II Class B quarterfinal against Fonda-Fultonville at Montgomery C. Smith Elementary School. 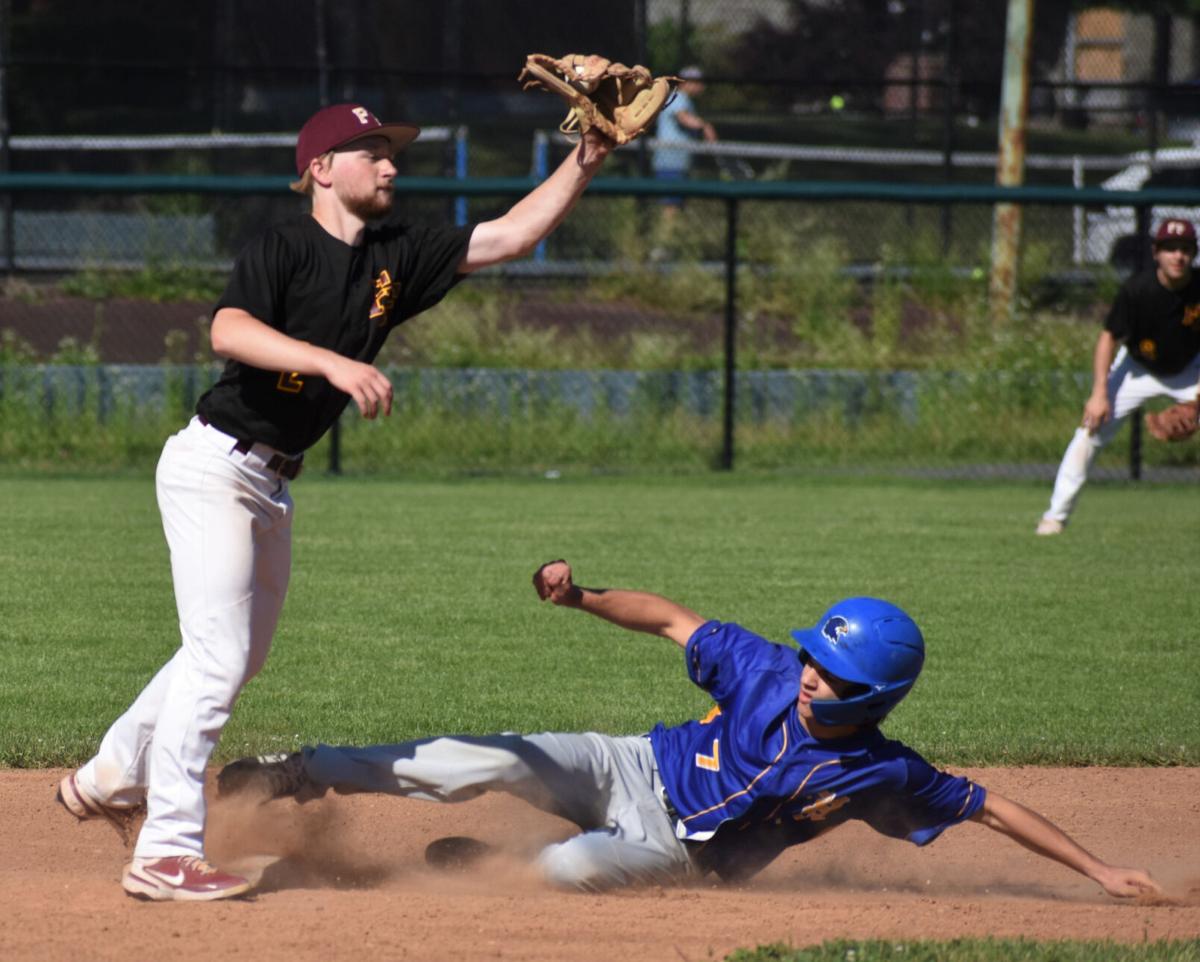 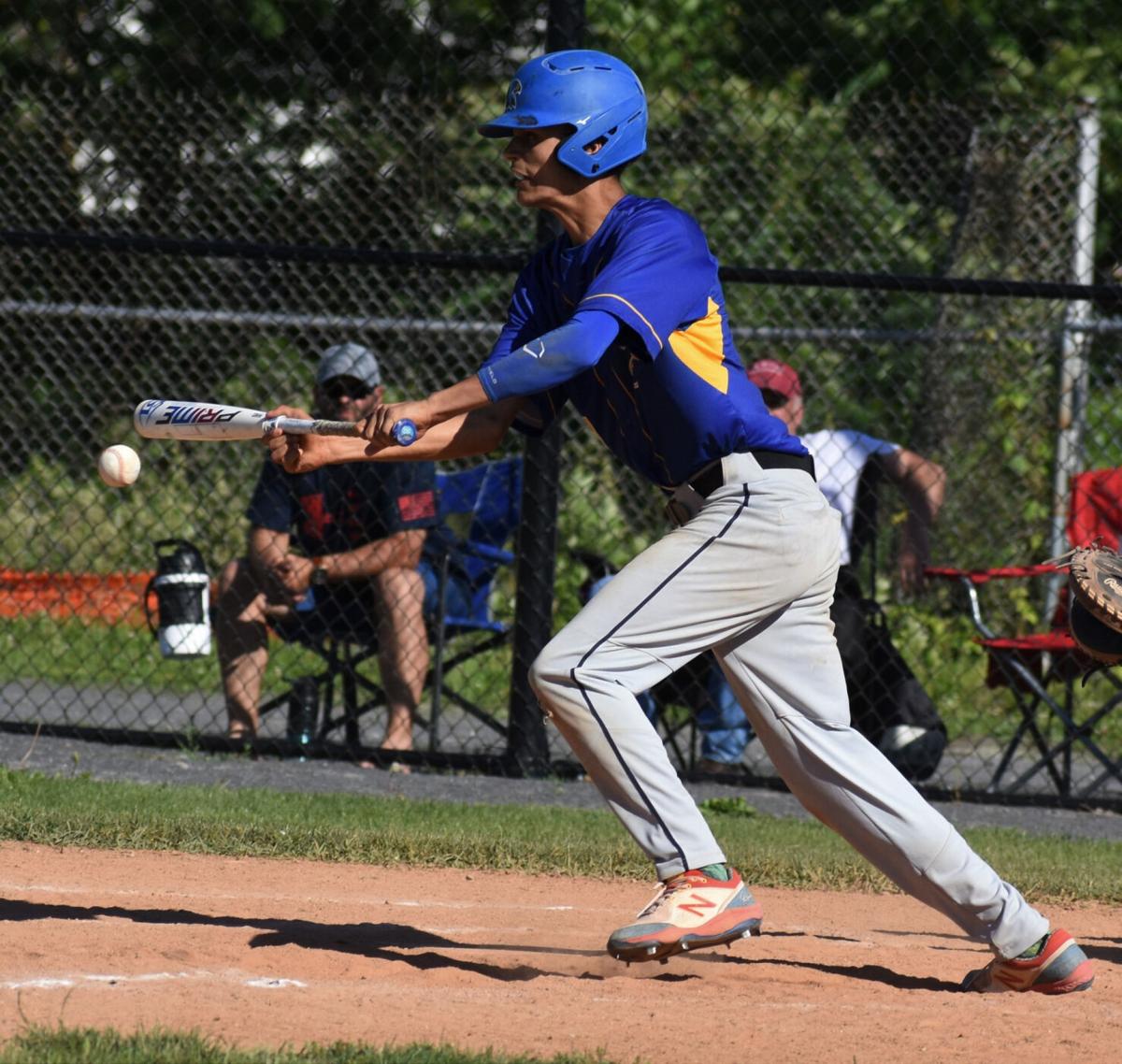 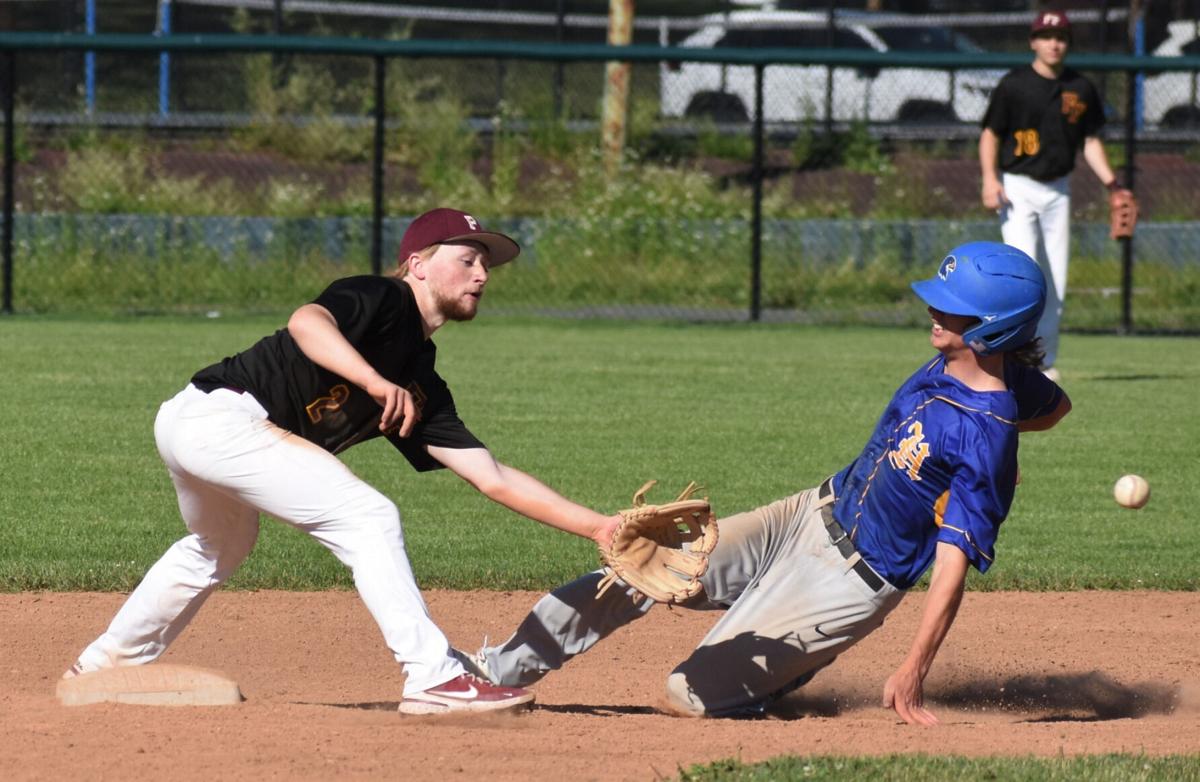 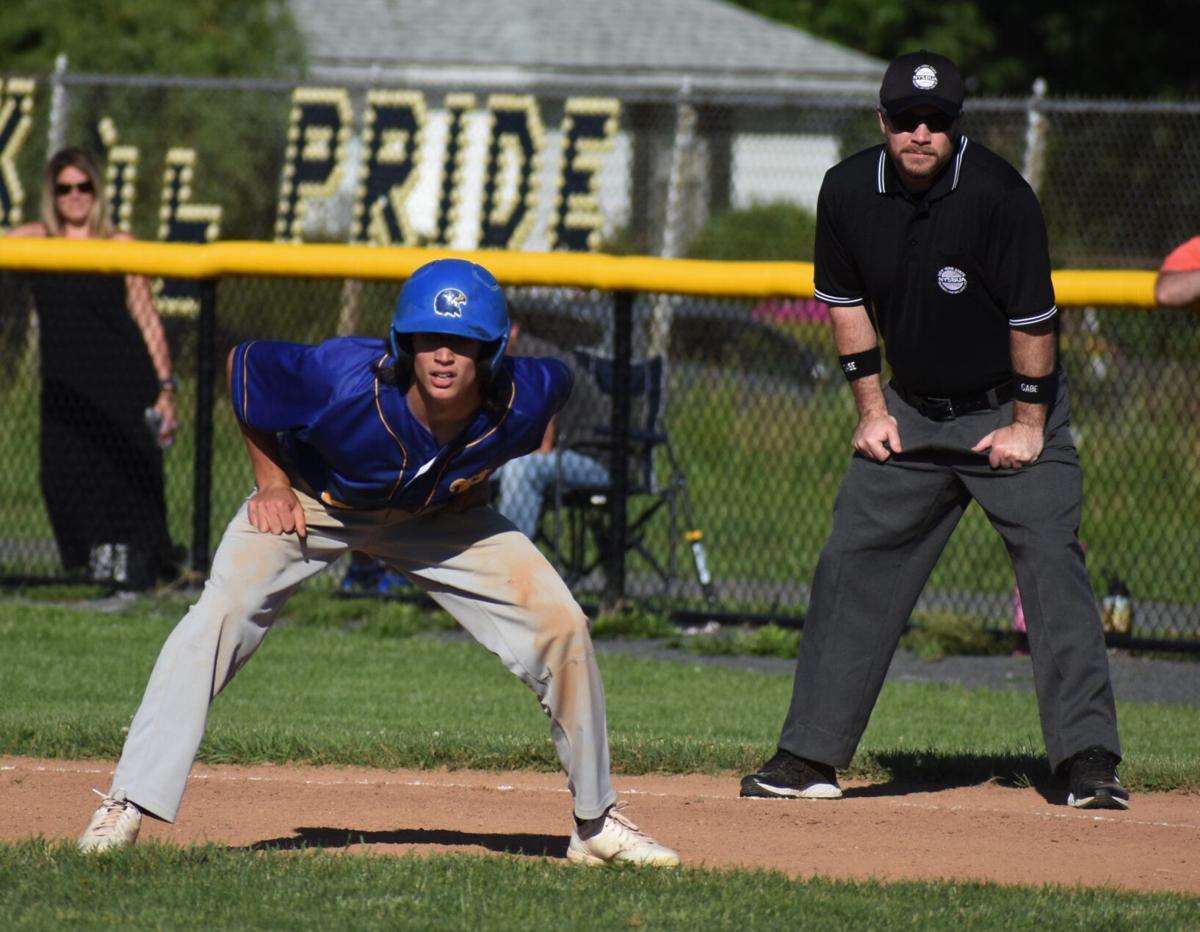 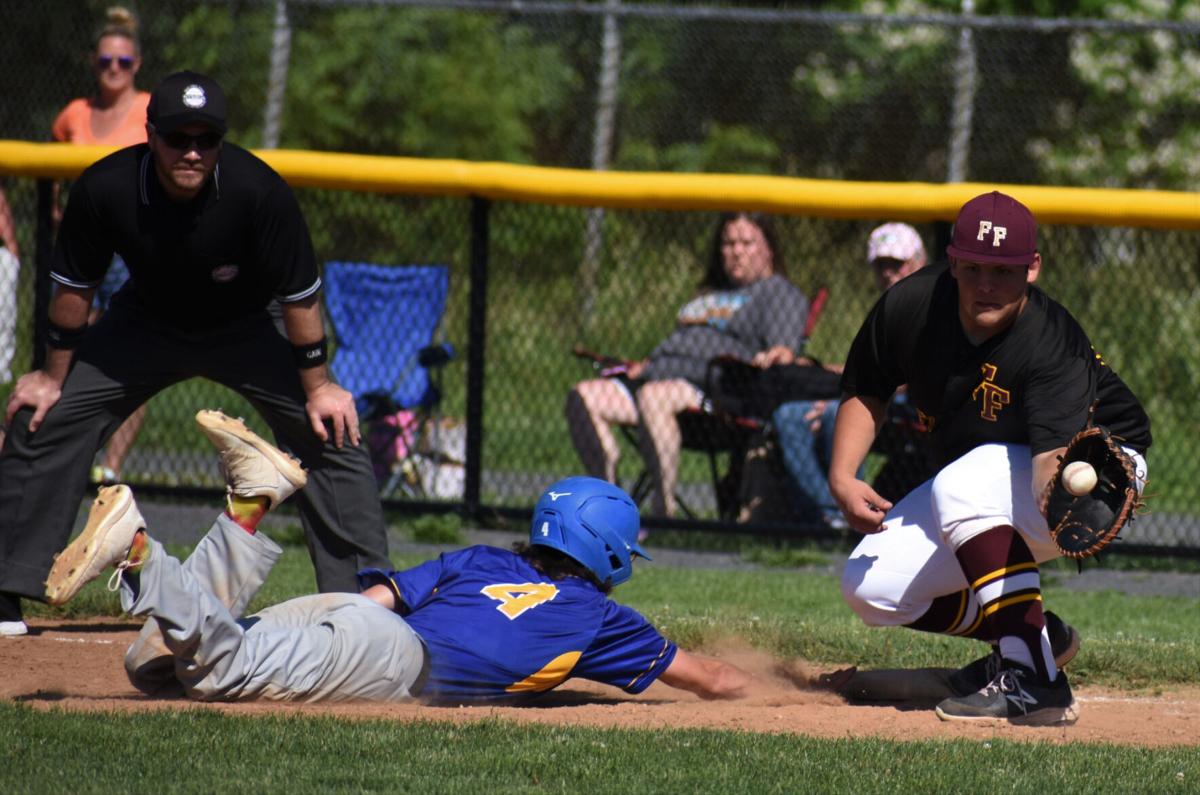 Tim Martin/Columbia-Greene Media Hudson’s Vic Gorman reacts after pulling into third base with a triple during Thursday’s Section II Class B quarterfinal against Fonda-Fultonville at Montgomery C. Smith Elementary School.

HUDSON — Hudson and Ichabod Crane will meet in the Section II Class B baseball semifinals at 1 p.m. on Saturday at Montgomery C. Smith Elementary School.

The No. 1 Bluehawks and No. 5 Riders punched their tickets to the semis with impressive wins on Thursday. Hudson defeated No. 9 Fonda, 10-2, while Ichabod Crane took down No. 4 Tamarac, 5-2.

HUDSON — Vic Gorman went 3 for 3 with a triple and Jordan Moon had a double and single with three RBI to back the four-hit pitching of Matt Bowes as Hudson defeated Fonda, 10-2, in Thursday’s Section II Class B quarterfinal.

Bowes pitched six innings, striking out four and walking four, before giving way to Isaiah Maines who struck out two of the three batters he faced in the seventh.

Bowes helped himself with the bat, collecting a double and single. Zach Bernockie and Jon Bernockie both had two singles and an RBI, Maines had a double and Kasey Moore and Tanner Race both drove in a run.

Gunnar Grethen-McLaughlin hammered a three-run homer and Nate Garafalo turned in a complete game performance on the mound as No. 5 Ichabod Crane advanced to the Class B semifinals with a 5-2 victory over No. 4 Tamarac on Thursday.

Garafalo struck out nine, walked three and scattered six hits in going the distance for the win.

Grethen-McLaughlin finished with a 2 for 4 day at the plate, finishing with four RBI. Topher Pelesz added a double and single and Garafalo, Justice Suafoa and Jack Mullins all singled.

Colby Phelps doubled and drove in a run for Tamarac. Tyler Sears added two singles and an RBI.

Phelps went the distance on the mound for the Bengals, striking out 11, walking two and allowing five runs and seven hits.

Ichabod Crane plays Hudson on Saturday at 1 p.m. in the Class B semifinals at Montgomery C. Smith Elementary School.

GREENWICH — Tyler Kneller limited No. 4 Greenwich to just three hits over 6 2/3 innings with nine strikeouts as No. 5 Chatham earned an 8-6 victory in Thursday’s Class C quarterfinal.

Tate Van Alstyne came on in relief to get the final out via strikeout.

Chatham will host No. 9 Lake George in the Section 2 semifinals on Saturday at 1 p.m.

GREENVILLE — Isaiah Edmonds and Cole Flannery both homered to lead No. 7 Greenville to a 7-2 victory over Cohoes in Thursday’s Class B first-round game.

Edmonds also doubled and finished with three RBI for the Spartans. Flannery had two RBI, Jake Miller doubled and drove in a run and Joe Domermuth and Ryan Arp both singled.

Flannery went the distance for the win, allowing two runs and six hits with 10 strikeouts and two walks.

GALWAY — Galway built a four-run lead and then held off a late Maple Hill rally to post a 6-5 victory in Thursday’s Section II Class C quarterfinal.

Galway was up 6-2 entering the seventh inning, but Maple Hill made things interesting with three runs in the frame. The Wildcats could not push across the tying run, though, and the Eagles held on for the victory.

Gavin Van Kempen led Maple Hill with a home run and three RBI. Matt Jung had a double and an RBI, Jerry Stalker doubled and Kaden Van Kempen and Joseph Brodzinski both singled.

4 ways to save money on prescription medications

Weekend DIY projects to refresh spaces to welcome back guests

Think FAST This Father's Day, Save a Life