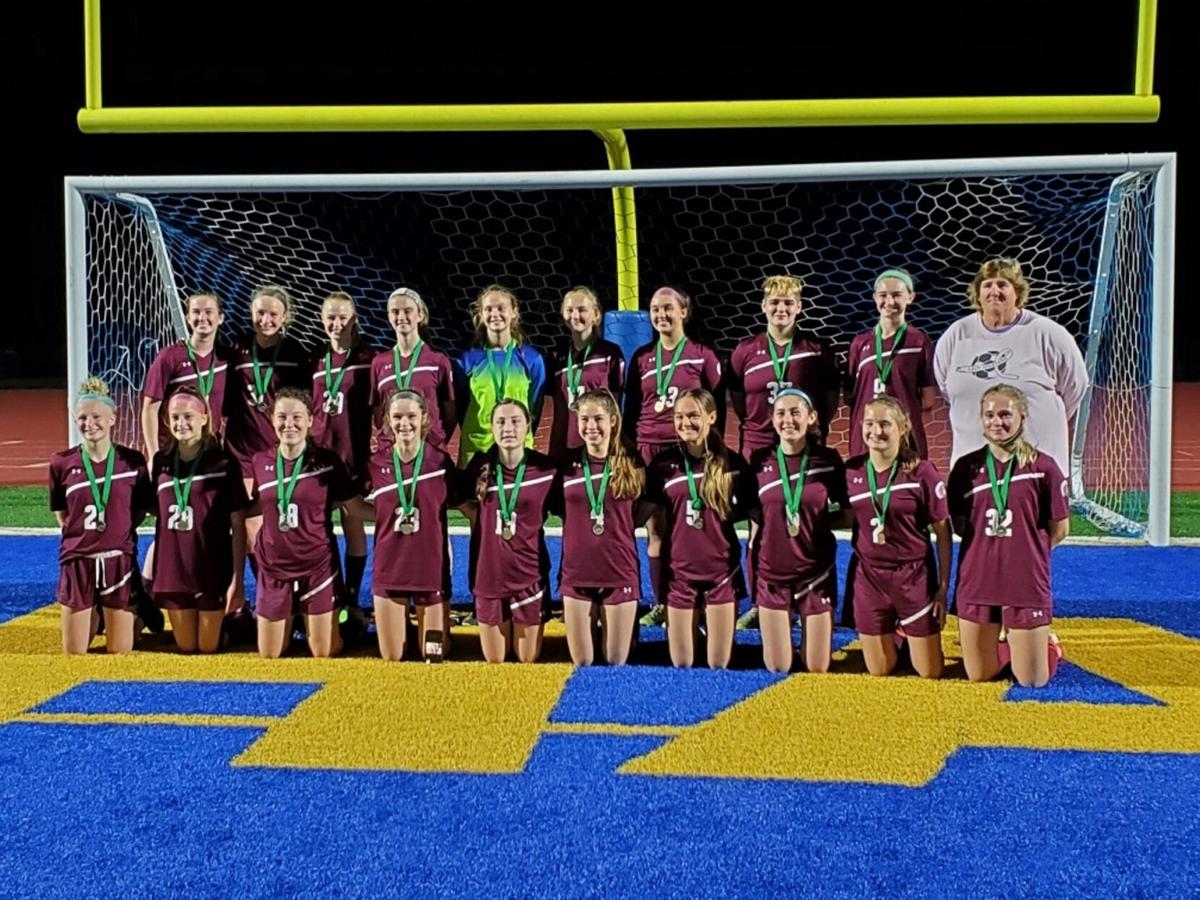 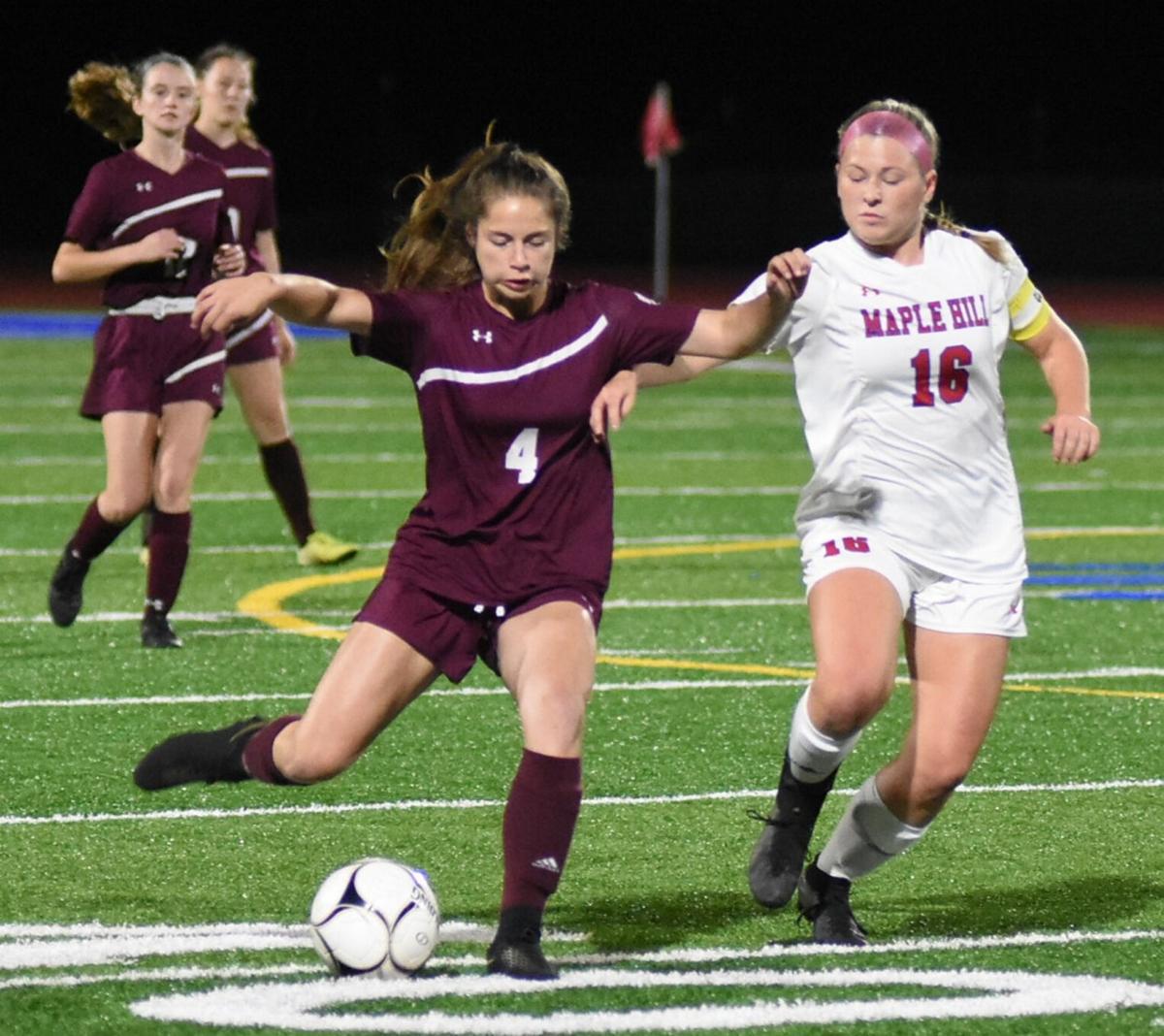 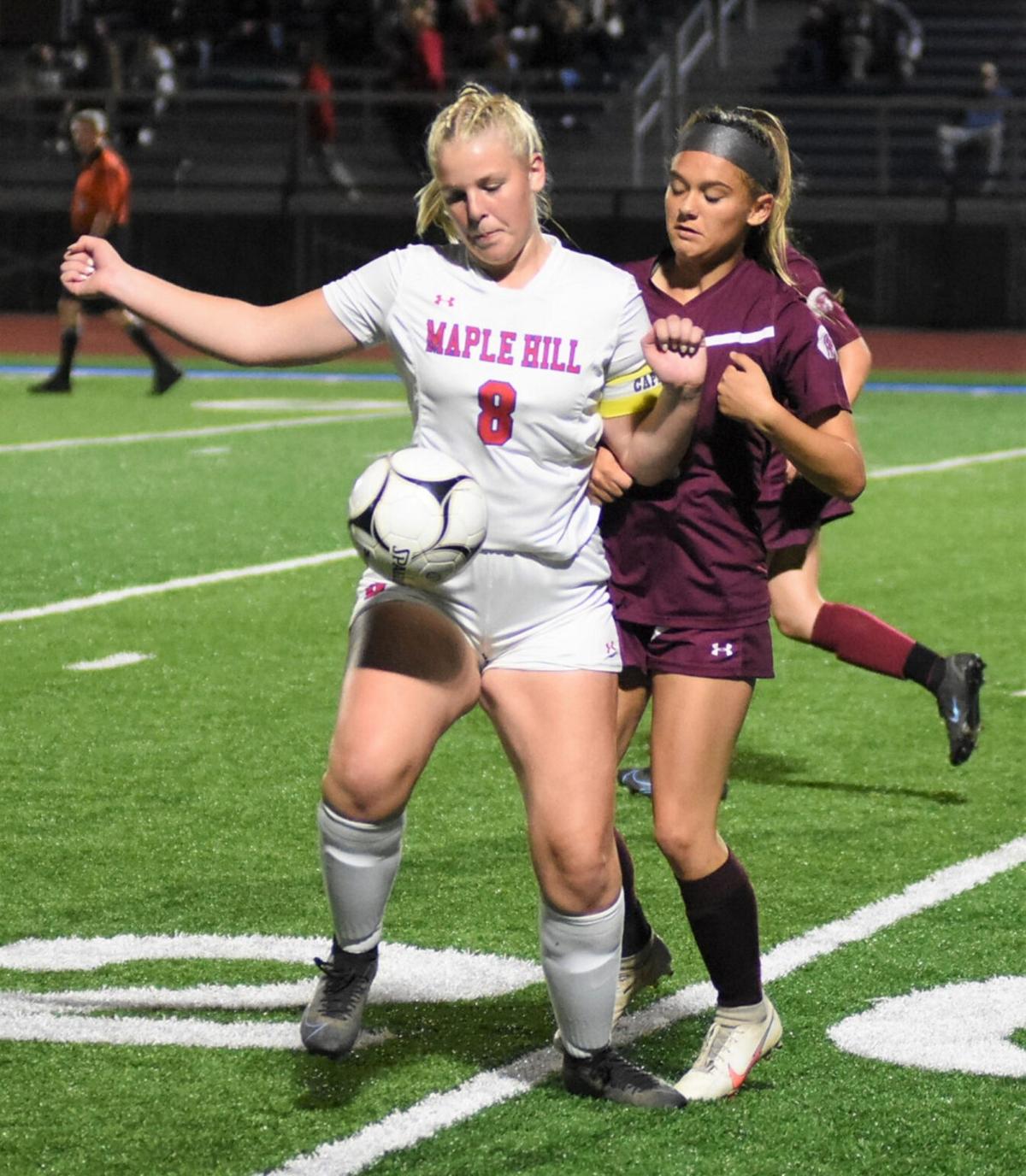 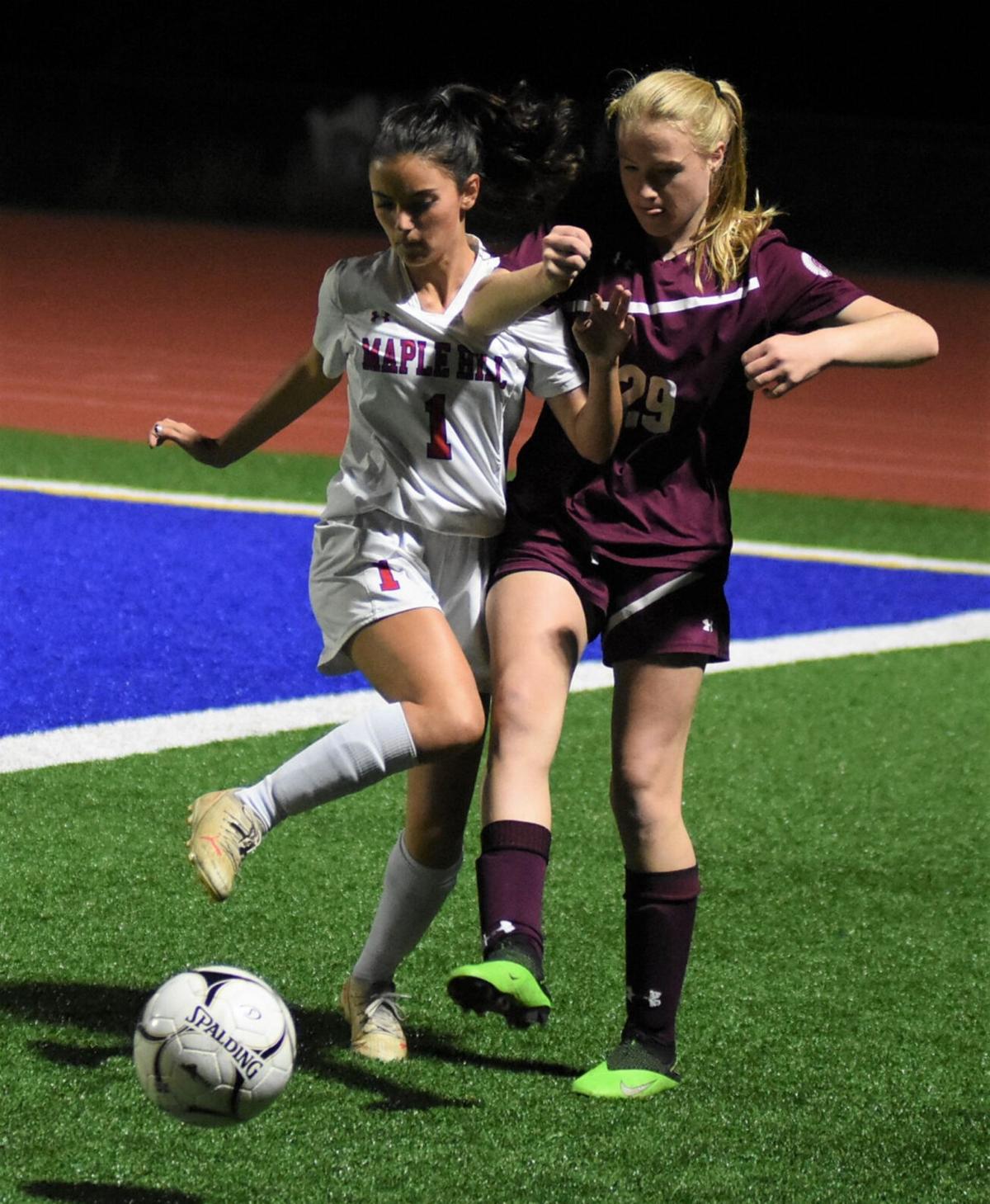 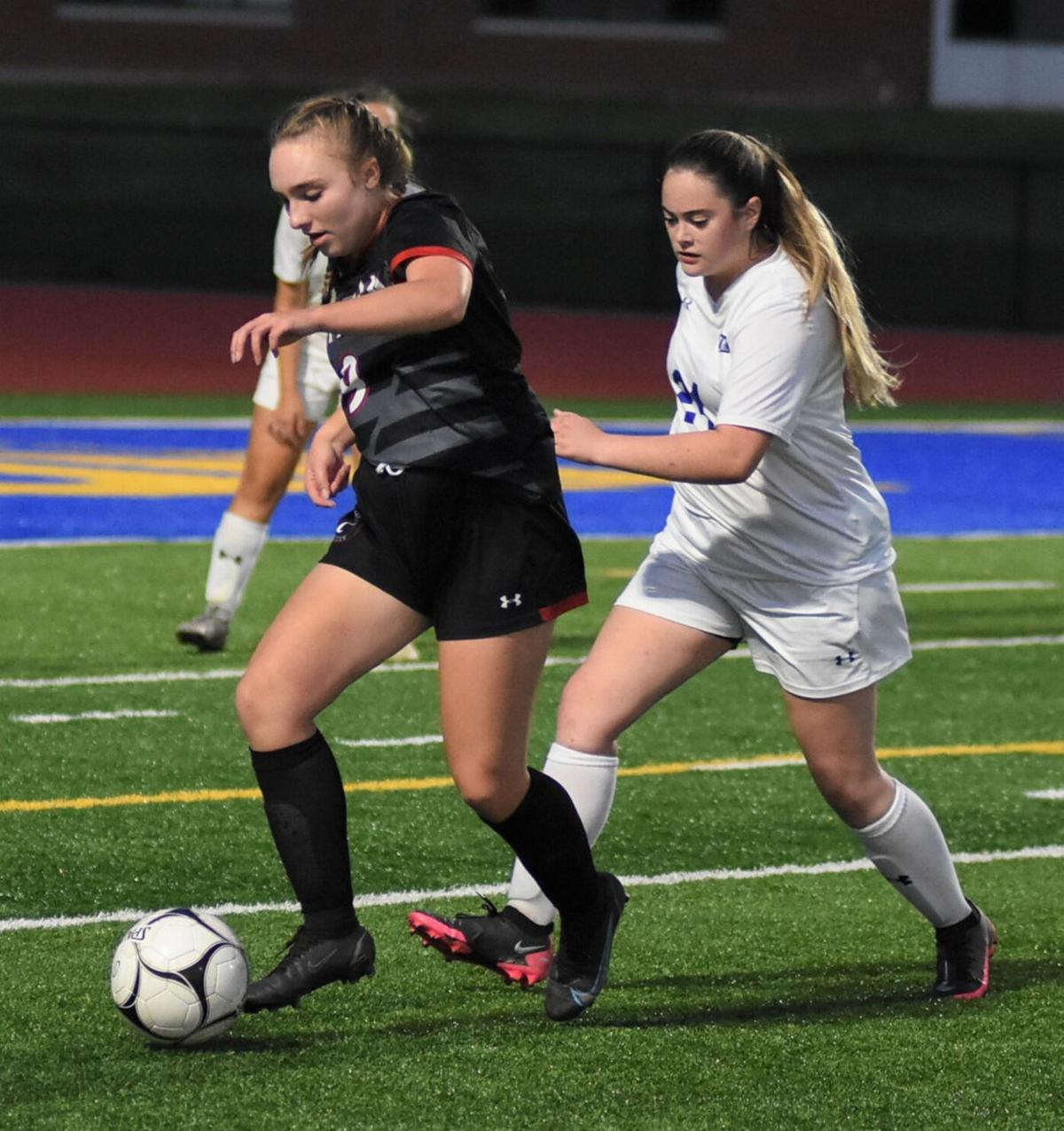 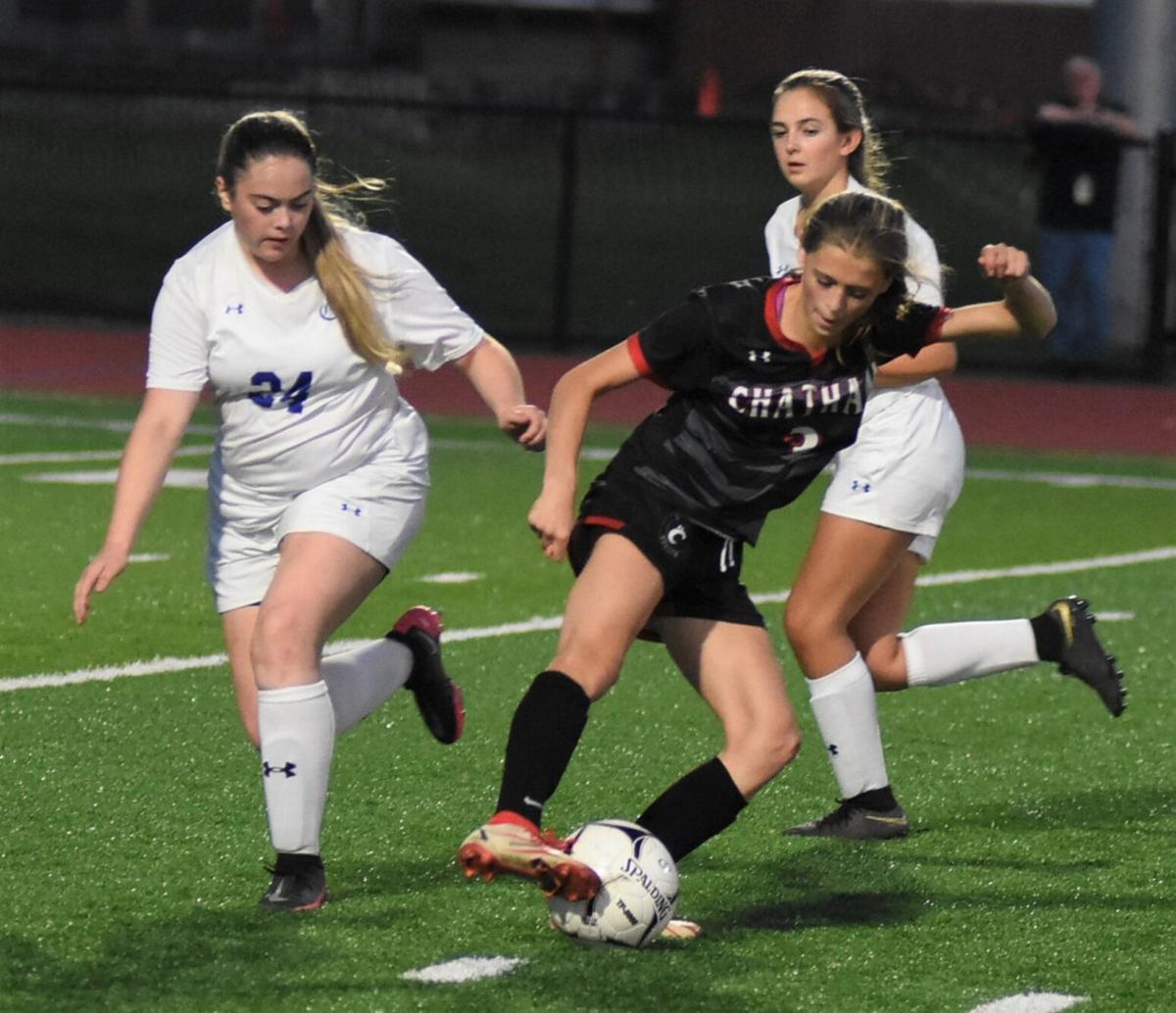 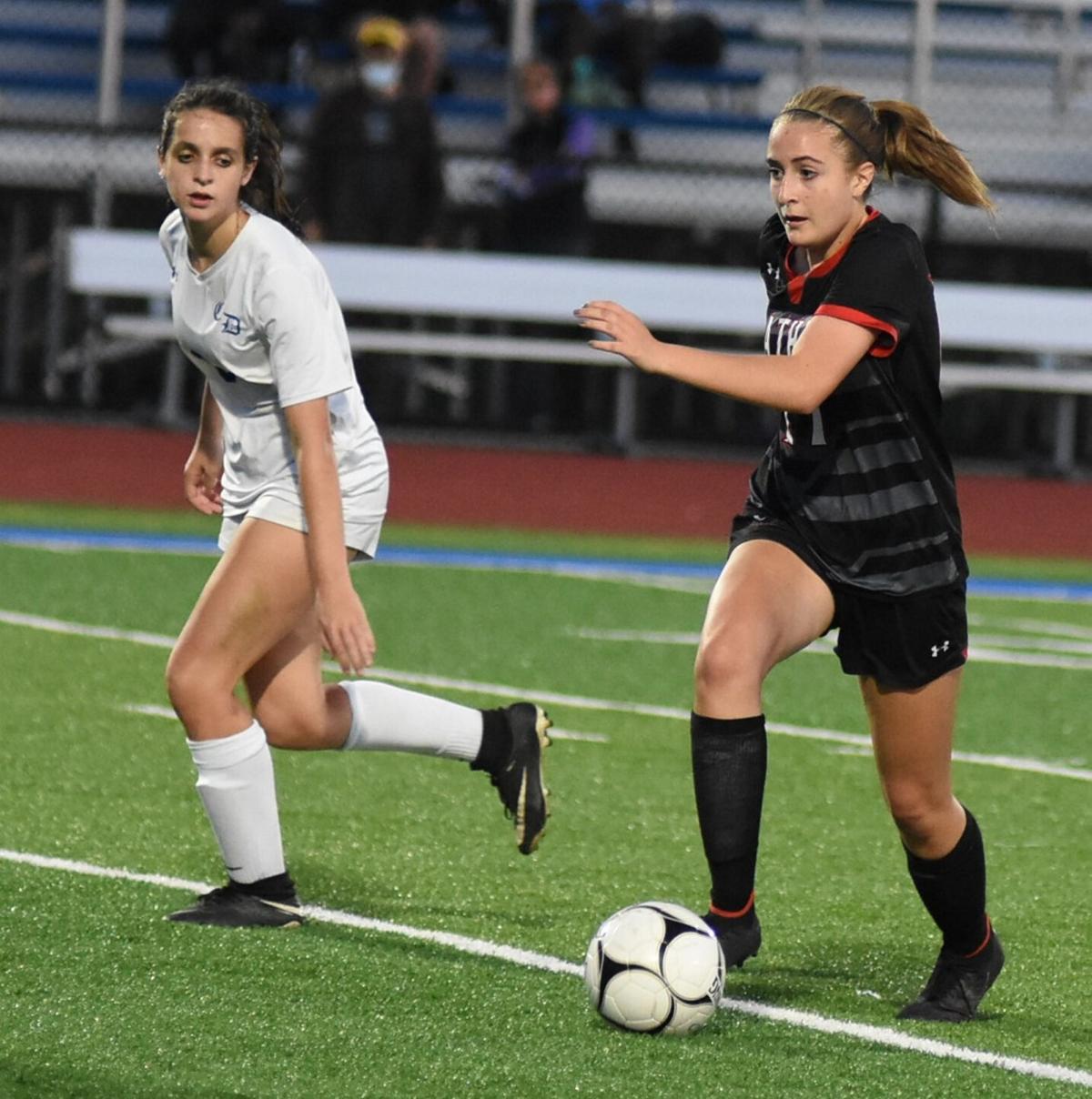 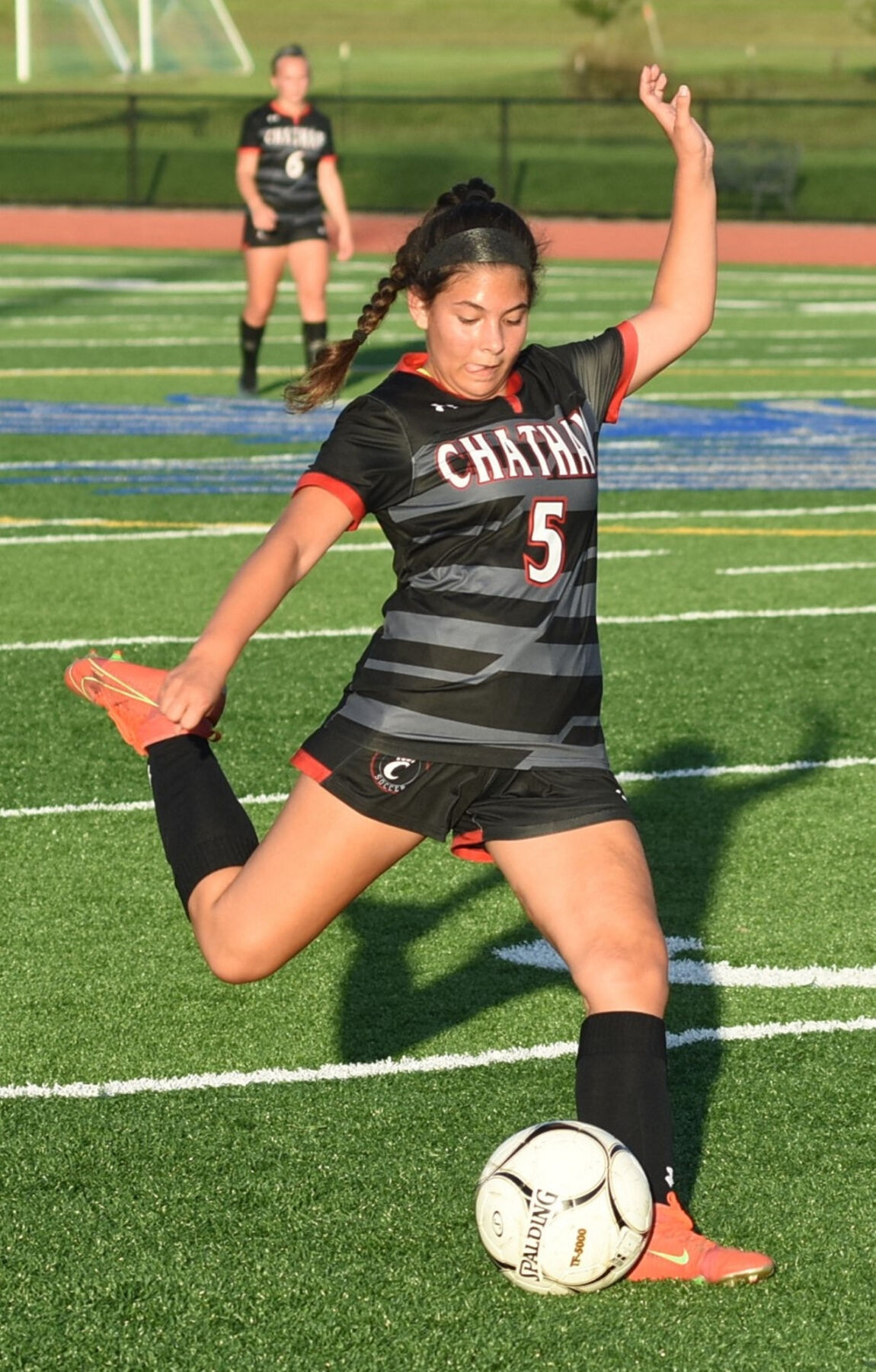 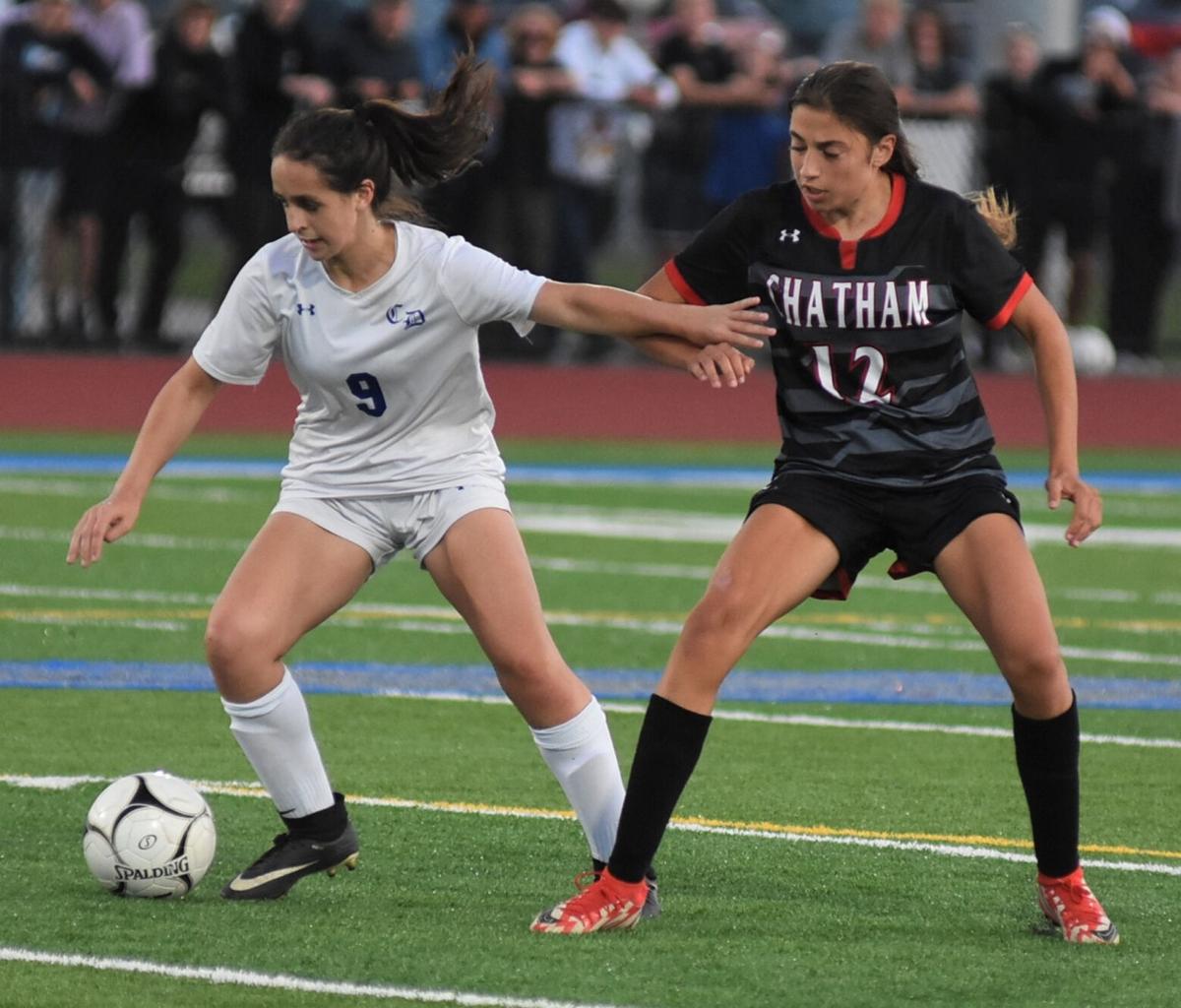 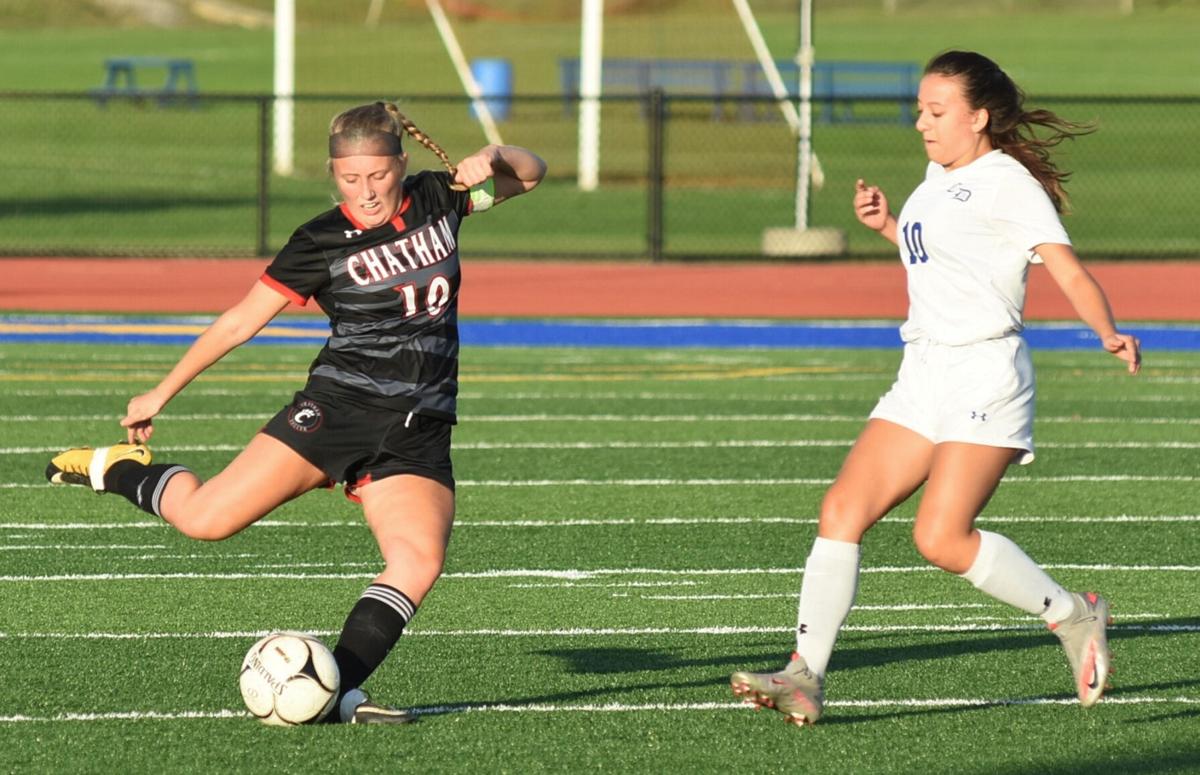 HUDSON — The Greenville Spartans and the Maple Hill Wildcats met for the Patroon Championship on Thursday at Hudson High School.

The Spartans defeated the Wildcats via penalty kicks after playing to a 1-1 tie through two overtime periods. The undefeated Spartans were confident and relentless to start, earning multiple corner kicks in just the first few minutes.

Though they were unsuccessful on the corners, the Spartans played with urgency and stayed on the attack. Greenville had a picture perfect throw-in to Caroline Kosich who crossed it beautifully to Ella Mulholland but she could get a clean shot on goal.

After some desperate attempts for offense by the Wildcats there was under twelve minutes before halftime. Both sides still played tight defense for the last moments before halftime and it stayed 1-1.

Both sides stayed busy in the second half, each goalie making multiple saves over the first few minutes of the second half. Eva Hirschoff finally broke through for Maple Hill and the Wildcats took a 1-0 lead just eight minutes into the second half.

Some time later, Ella Grupe ended up with the loose ball and scored to tie the game at 1-1 with 13:32 on the clock. After a few corner kicks and possessions that generated no scores, the clock was down to zero and the title game was still tied 1-1.

The first overtime period was dominated by the Spartans’ intensity and dedication to their offense. Free kicks, corners, and crossing passes were plentiful for Greenville but they could not put the final piece together to get shots off with both teams visibly exhausted.

Soon the first period of required overtime was over and the score was still 1-1. It was much of the same in the second ten minute overtime period with the Spartans staying on the offensive.

The time of the second overtime dwindled even faster than the first and it slipped away to leave both teams still tied 1-1. After the athletic directors held a discussion they agreed to finish it via penalty kicks. After an exciting few rounds of kicks, the Spartans needed one more make to seal the victory.

Kosich lined up for the shot and drilled it into the back of the goal to win the game at long last for Greenville and keep their unbeaten season alive.

The Greenville Spartans defeated the Maple Hill Wildcats 2-1 in the Patroon Girls Soccer Tournament Finals to win the regular season title for 2021.

HUDSON — The 2021 Patroon Tournament for girls soccer continued at Hudson High School Thursday evening. The Cairo-Durham Mustangs were victorious over the Chatham Panthers 2-1 in the third place game to begin the night.

Both teams played to their strengths early, affording themselves opportunities when necessary. Chatham’s Eudora Brennan found teammate Addison Perry on a pass into the box, but Perry’s shot was not hit cleanly and the Mustangs cleared. Soon thereafter, Perry took another shot on net that deflected off of defender Danna Saad’s head and went in for an own-goal to give the Panthers a 1-0 lead just nine minutes into the game.

Cairo-Durham tried multiple times to respond on offense but it was either stolen away or punched out by Chatham keeper Sarah Harrison. The Panthers earned two corner kicks in the final minutes of the half but they did not convert to widen the margin, so they stayed up 1-0 at the break.

The Panthers maintained their intensity as the second half began and the Mustangs had trouble clearing the ball out of the zone for quite a while. On more than a few occasions the players on both sides collided but no fouls were called on either side for the contact.

The Mustangs had a breakaway chance midway through when Mackenzie Sherburne got a pass on a 2-on-1 that crossed up Harrison as Sherburne put it in to tie the game 1-1.

With under 20 minutes to play Sherburne had another massive opportunity on a fastbreak but her shot sailed right of the net and out. Cairo-Durham kept it down on offense and was wearing the Panthers’ defense down minute by minute.

Sherburne’s hustle kept her a part of almost every play as well, and her hard work paid off when she scored again off of a deflection by the goalie Harrison.

With the Mustangs leading 2-1 now late in the game, the Panthers were in panic mode now to try and tie the game up. They worked the ball upfield and into the box and had a wide open shot to tie the game but Perry’s shot went wide to the left of the goal and missed.

Perry had one last try in the final seconds but could not get enough cleat on the pass from her teammate and Noelle Amoroso gathered it in the goalie box to run out the final seconds and secure the 2-1 win for Cairo-Durham over Chatham.

CATSKILL — Catskill earned a 5-0 victory over in the Patroon Conference Girls Soccer Tournament on Thursday at Catskill High School.

Nadia Pell (2), Aryanna Burbas (2) and Jillian Devlin all scored for the Cats (8-5). Burbas had two assists and Kaelyn Bulich and Devlin one assist each.

Alex Hallam recorded the shut out in goal.