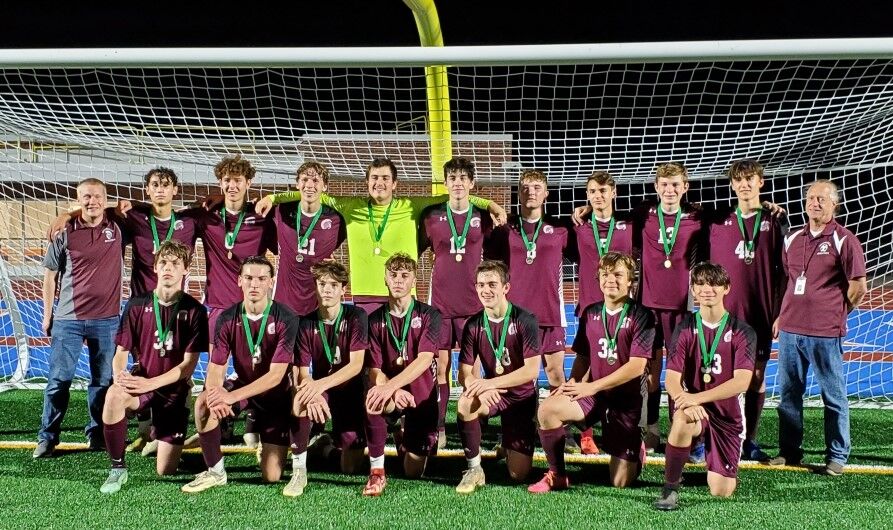 Greenville wrapped up the Patroon Conference boys soccer championship on Friday with a 1-0 victory over Maple Hill at Catskill High School. 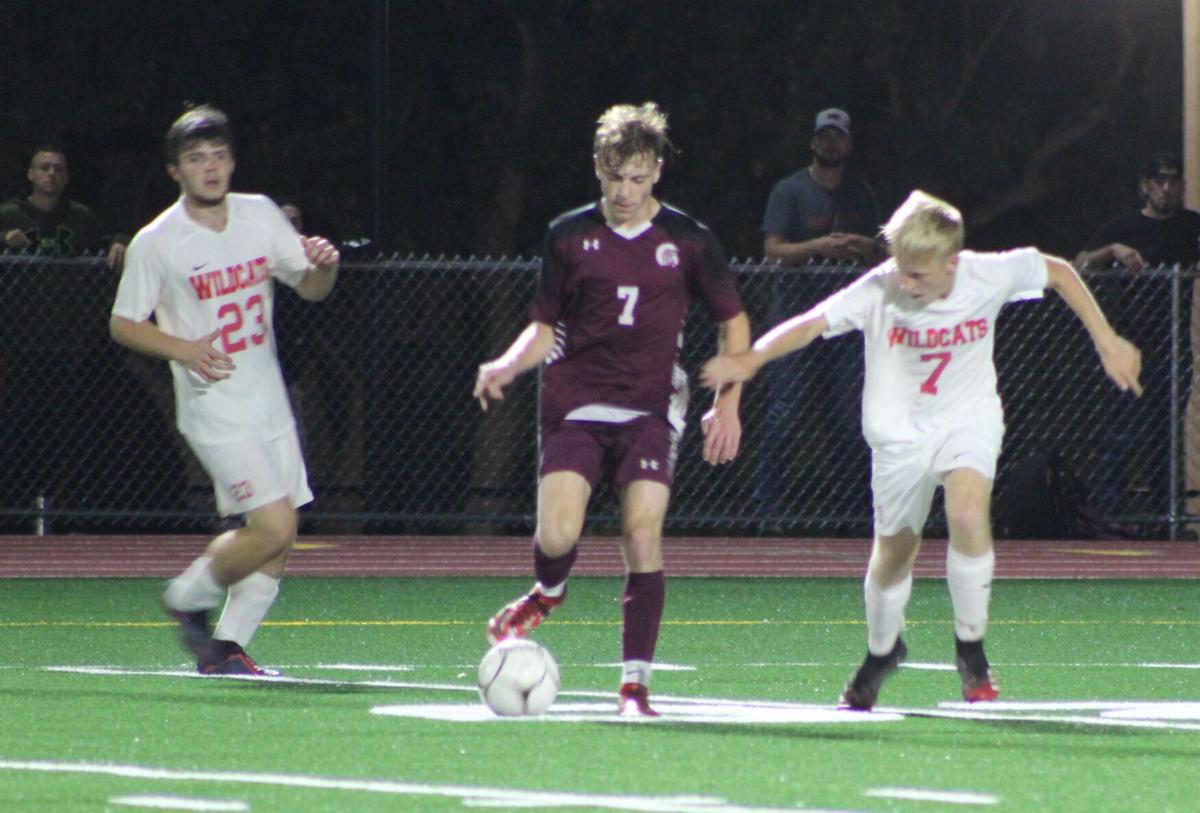 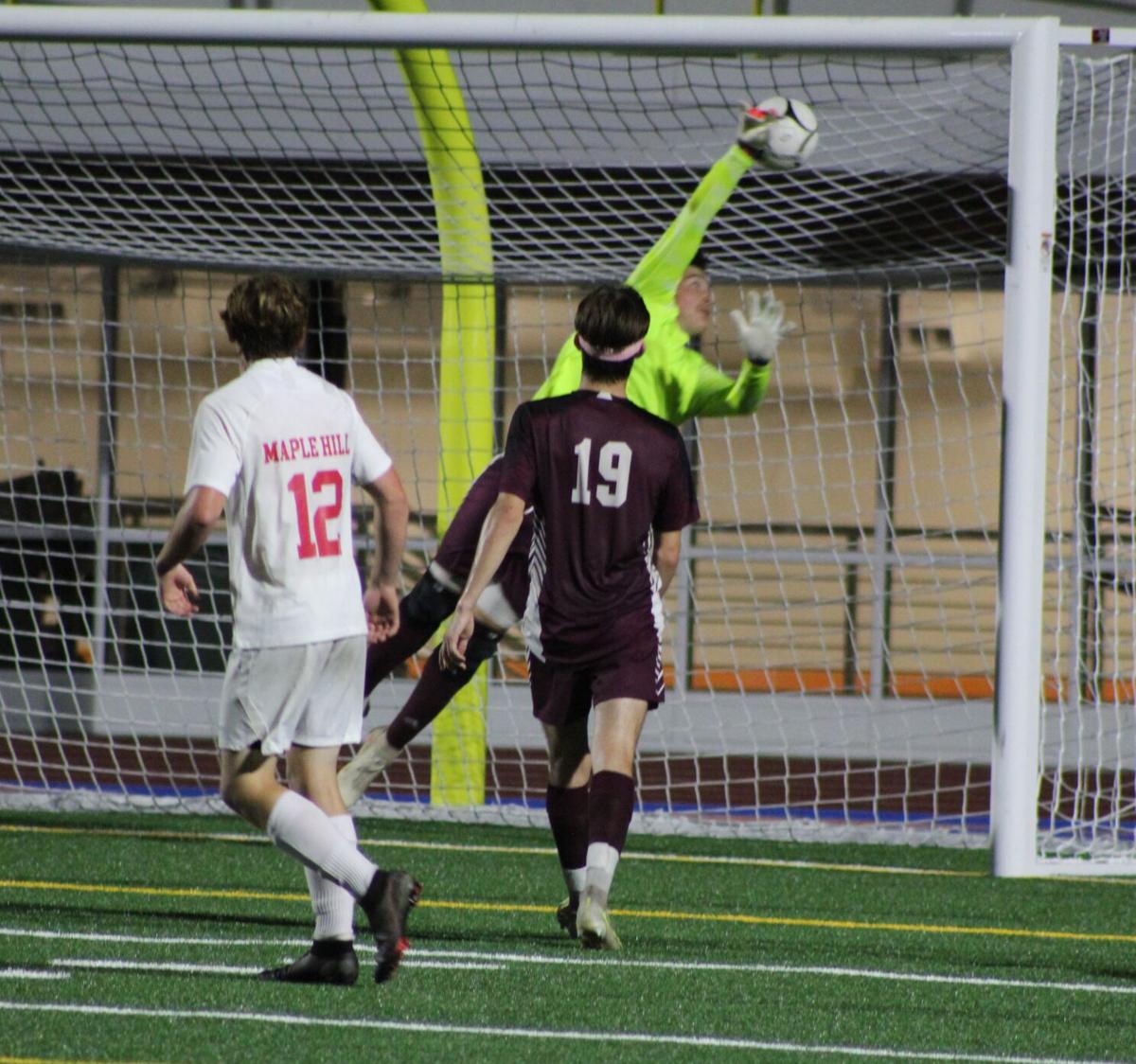 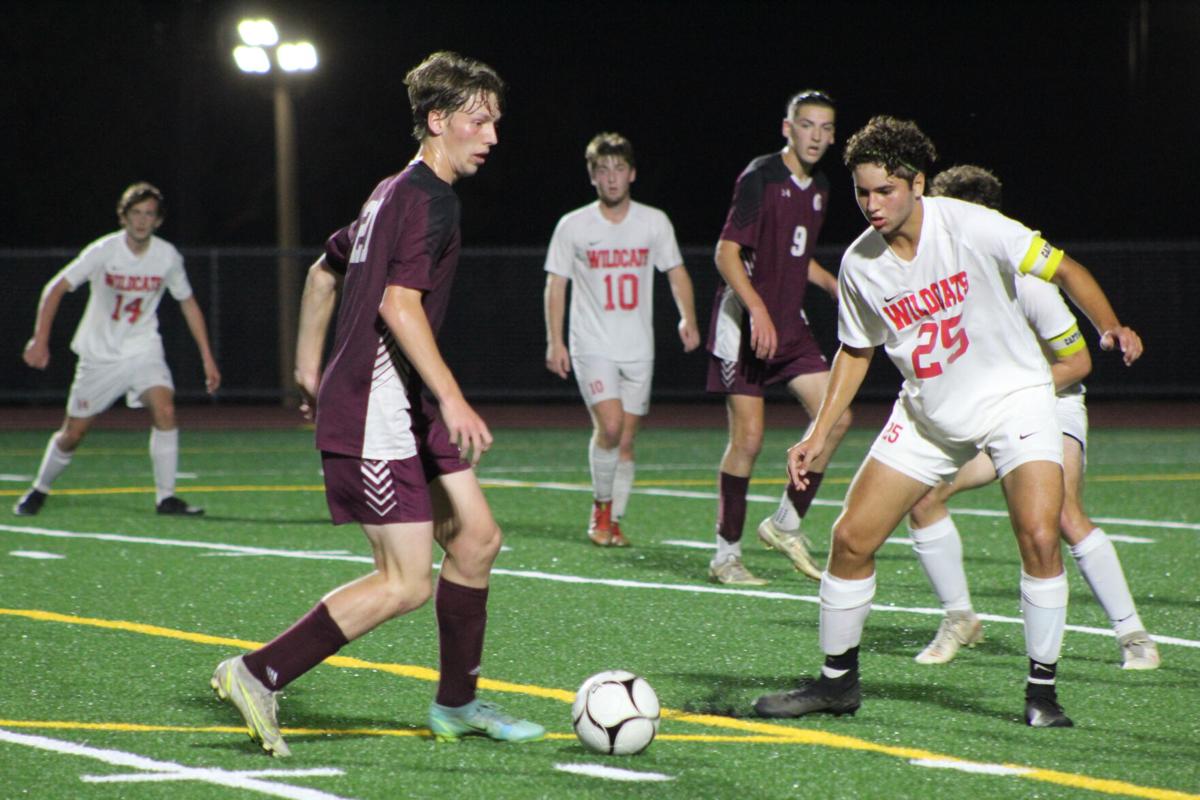 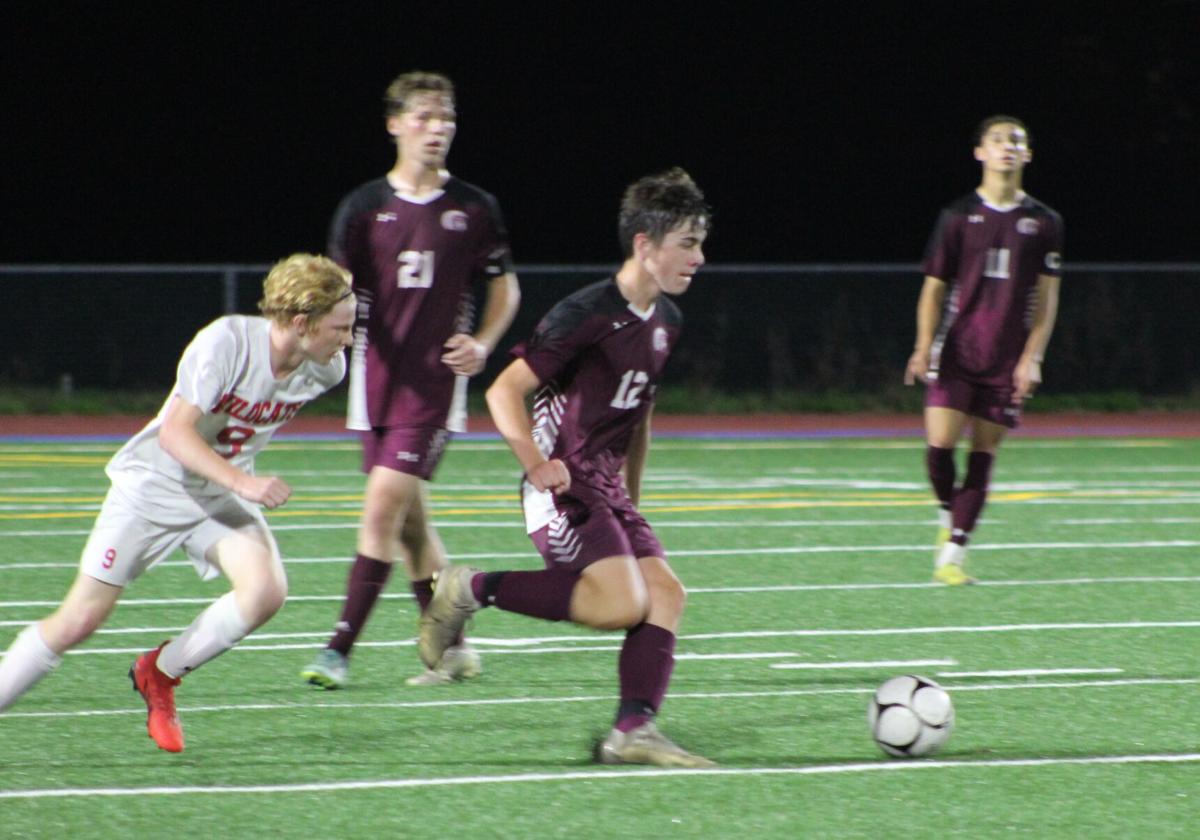 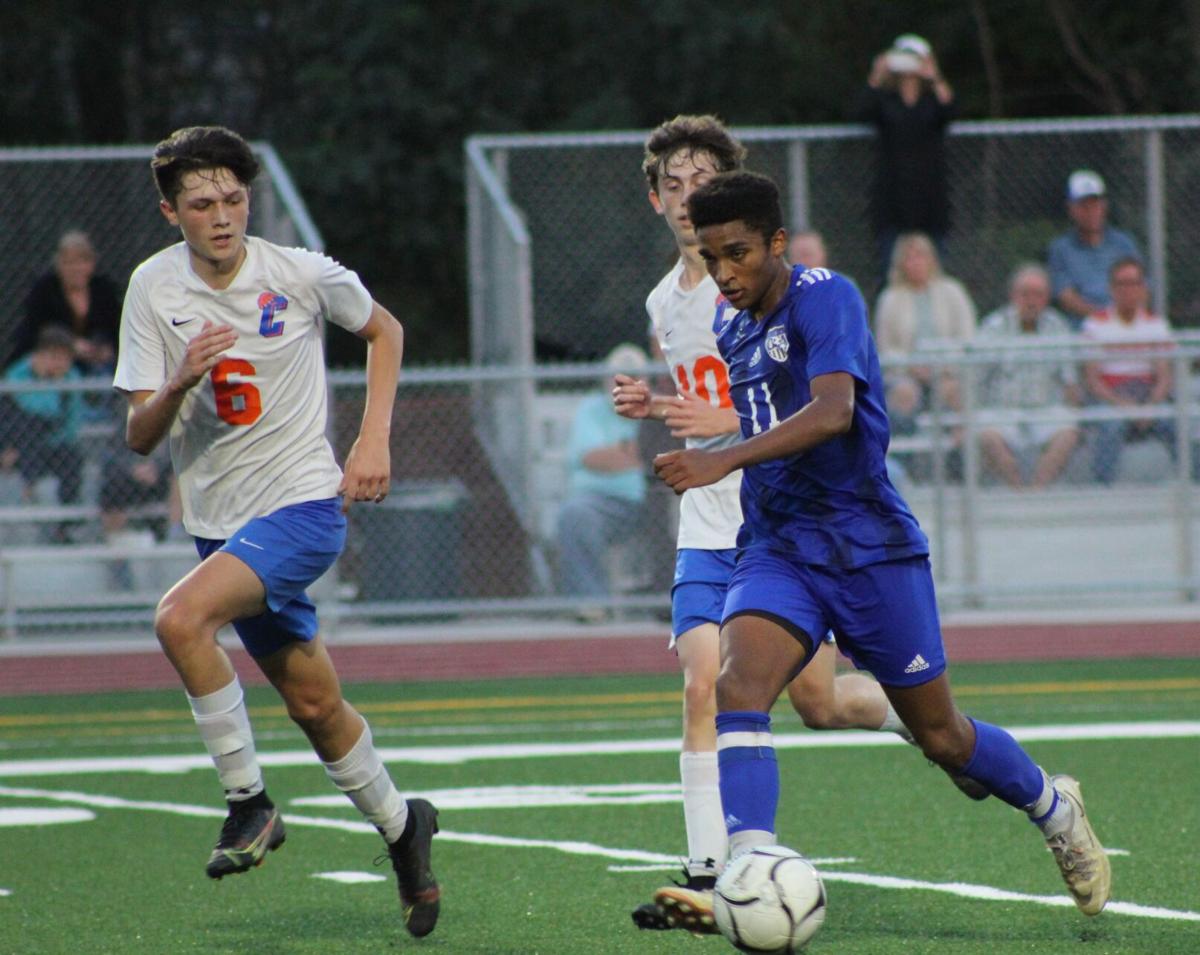 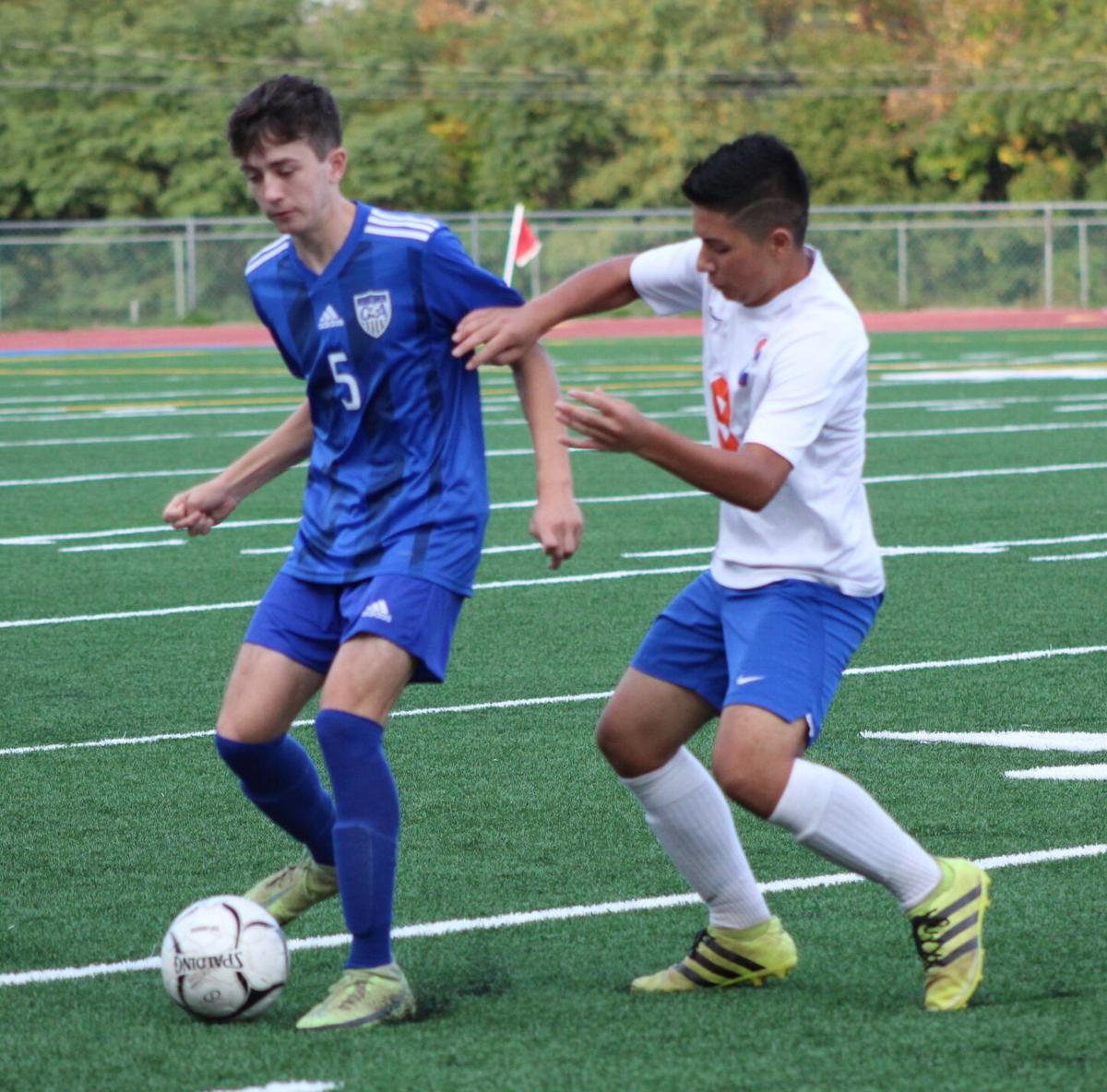 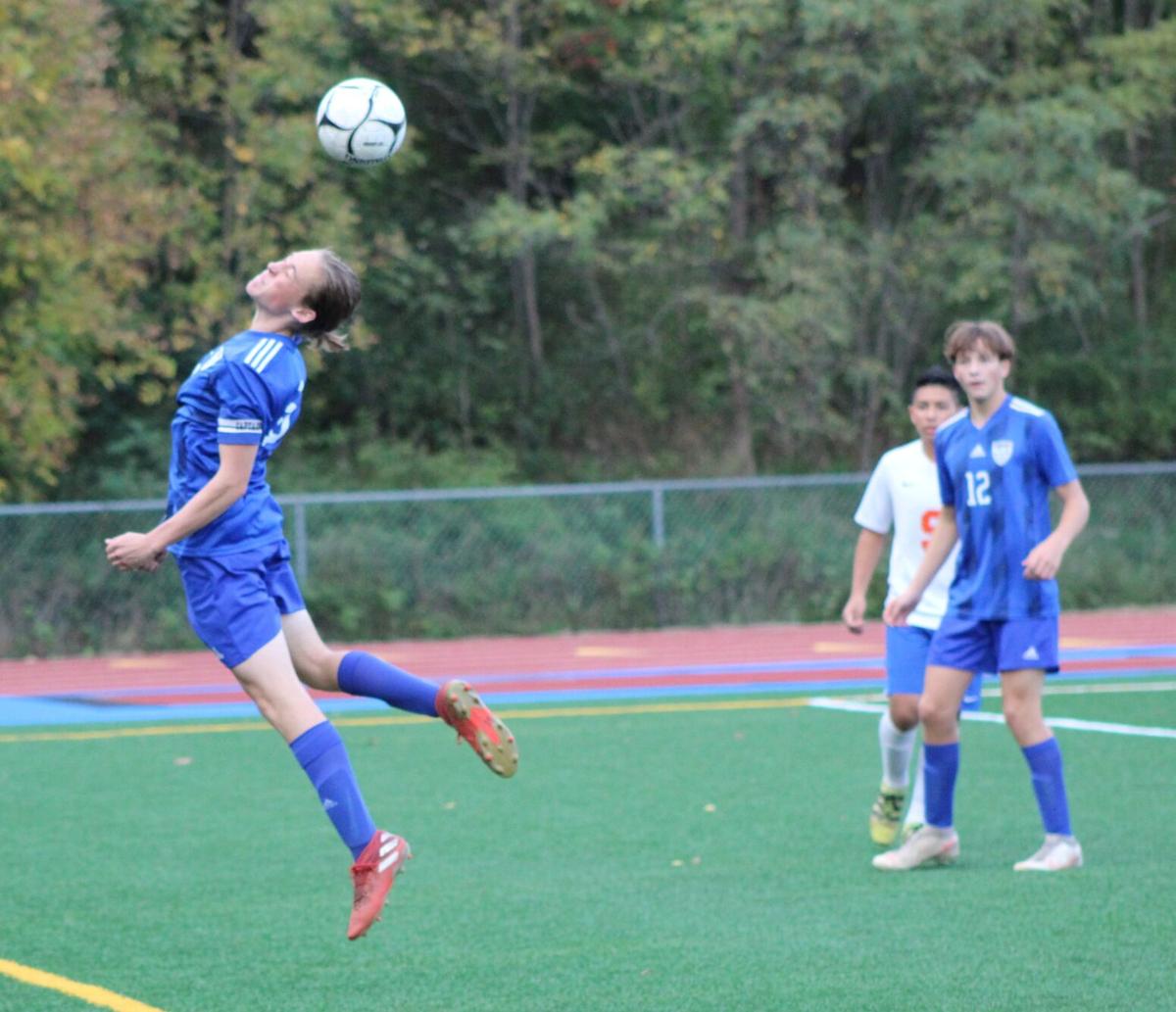 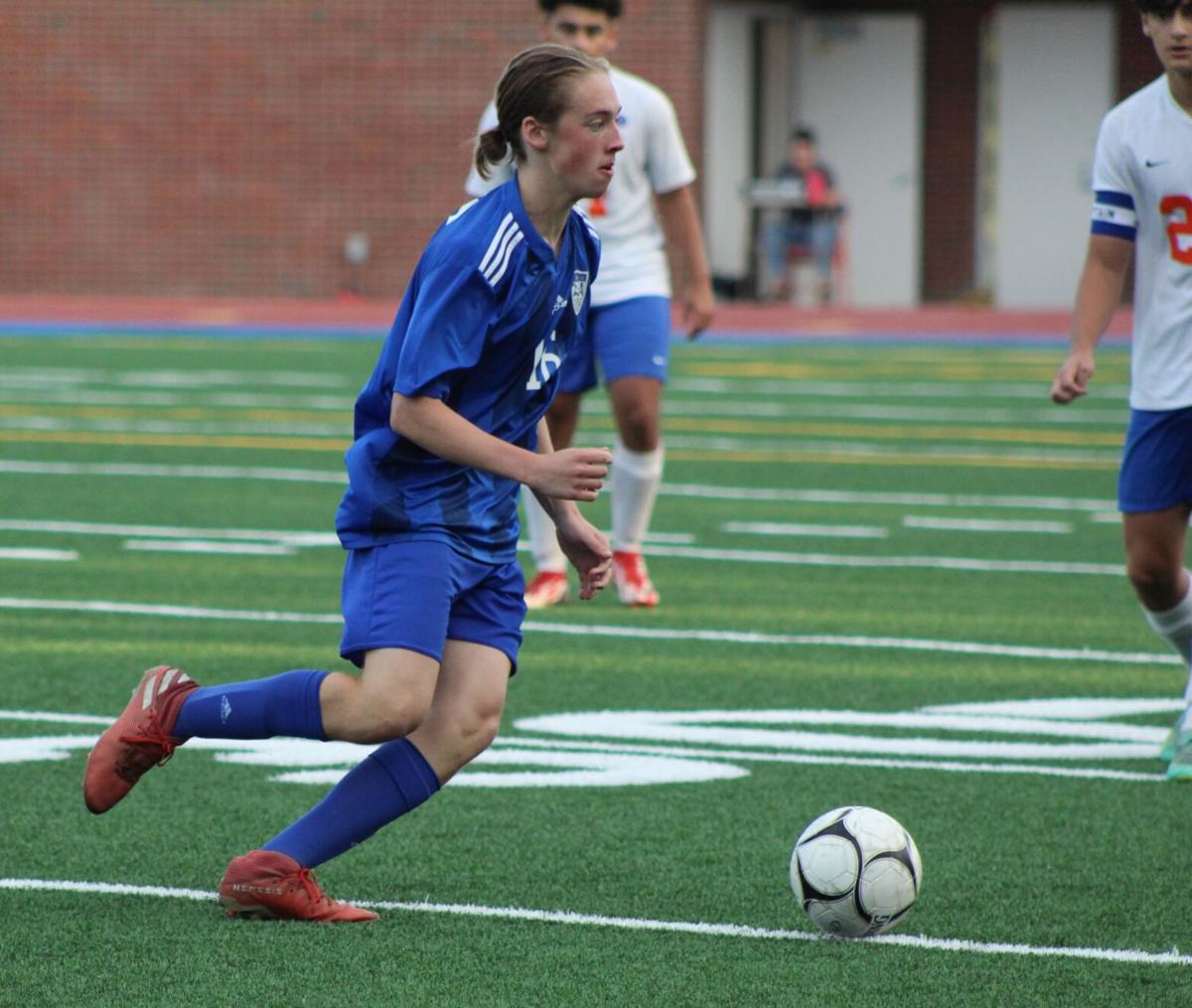 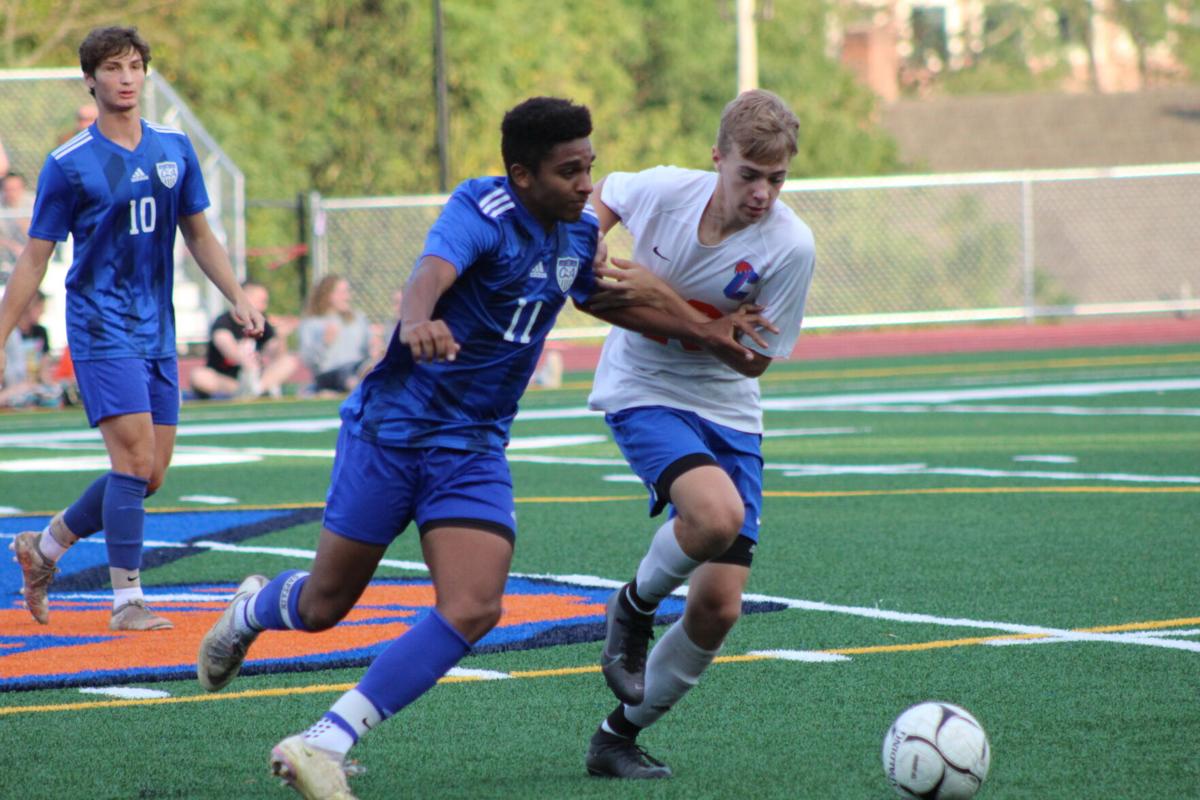 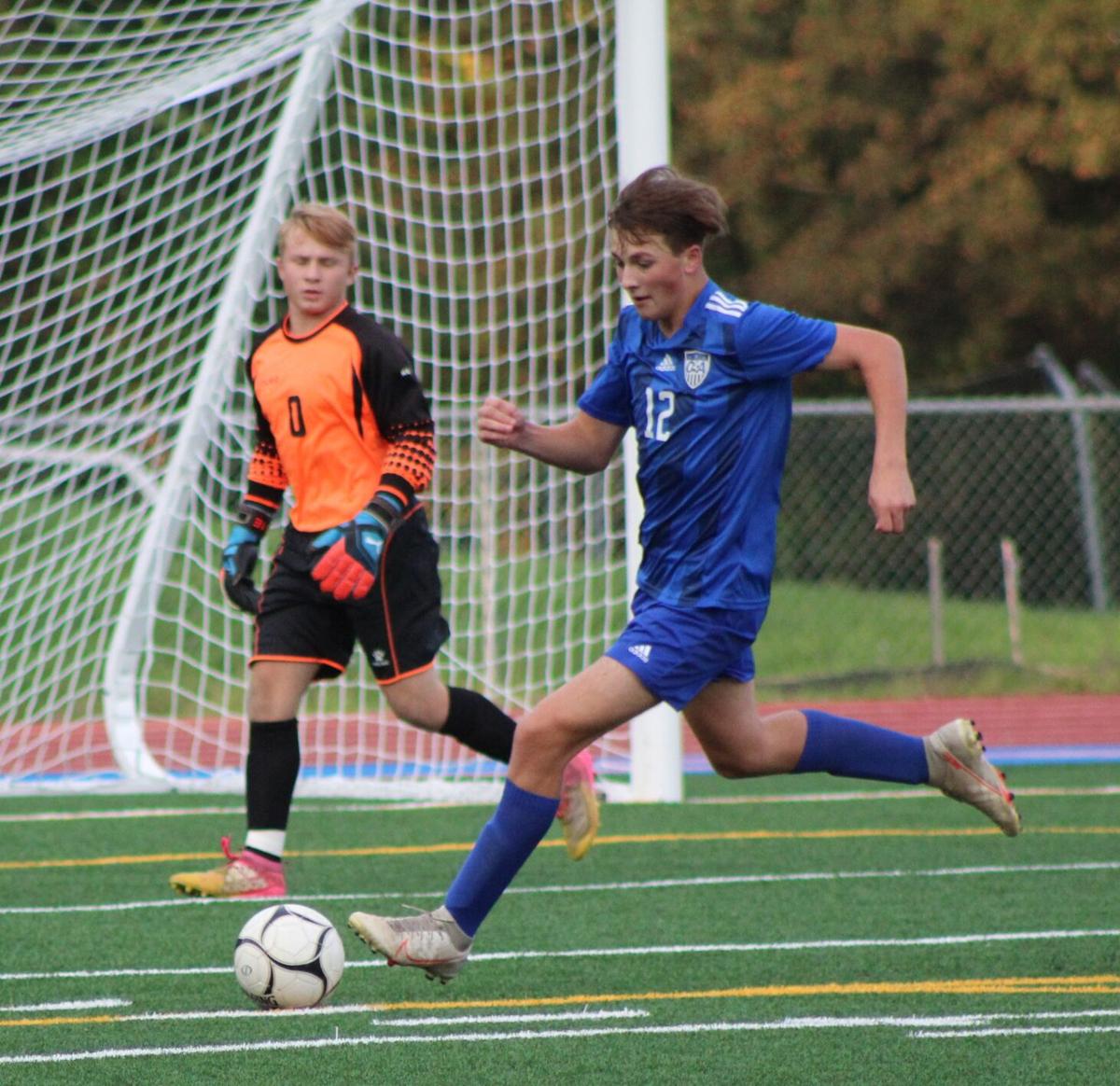 Greenville wrapped up the Patroon Conference boys soccer championship on Friday with a 1-0 victory over Maple Hill at Catskill High School.

CATSKILL -- The 2021 Patroon Boys Soccer Tournament wrapped up Friday and  the championship came down to the Greenville Spartans and the Maple Hill Wildcats.

The last time these two teams met, the Spartans handed the Wildcats their only loss of the season 5-0.

Greenville came out in this game with better ball control in the first few minutes. Maple Hill’s defense stayed ready though, and a steal gave them an opportunity to take it upfield. They earned a free kick and worked it down for a throw-in down by the box. Ethan Miller took a shot off of the throw but it was caught by Spartan keeper Joey Domermuth.

Greenville had a free kick of their own at the other end taken by Liam Bowden. He passed it out to Benjamin Reinhard, who then hit it across the field to Peyton Gergen who took a shot from deep that found the hands of Wildcat goalie Luke Hoffman.

The Spartans got another free kick later, after being called offsides on a breakaway that would have yielded a score. Instead, Bowden took the free kick from near the left sideline and booted it long and into the net to give Greenville a 1-0 lead with 17 minutes to go before halftime.

Domermuth made some more huge saves to retain the lead for his team, including two on back-to-back corner kicks by Maple Hill. The Wildcats got a free kick moments before the half ended, but the shot sailed out and the Spartans took their 1-0 lead into halftime.

Greenville started the second half with just as much energy as before, and Reinhard put a shot on goal right away but it went way too high and was out for a goal kick.

The Wildcats tried to work the ball up either sideline on multiple possessions, but the Spartans’ passing regimen was slightly more polished and they could regain control at a moment’s notice. Maple Hill earned a corner kick 12 minutes into the half, and they got another throw-in when it was cleared by the defense.

Despite the Wildcats’ quality chances on offense, the Spartans had an ability to respond with chances themselves almost immediately on any given play. Maple Hill had their best chance of the game to score on another free kick that was deflected in the box and sent Domermuth diving in the wrong direction. A Greenville defender bailed out his keeper on the play and cleared the ball out of the box to give Domermuth time to recover.

The Wildcats’ intensity did not waver in the final 15 minutes of the game as they stayed on the attack and kept the ball on the Spartans’ side of the field for a number of minutes. When they had a clear lane for another shot on goal, Maple Hill did not hesitate, but the ball sailed high over the crossbar and Greenville had a moment to breathe.

The Wildcats persisted inside ten minutes to go, and another shot went towards its intended target, but glanced off the side of someone’s head and directly into Domermuth’s hands yet again. Bowden got a free kick near midfield that he boomed into the goalie area but his teammate’s header went out of bounds with 5:30 on the clock.

The Wildcats made one final push on offense and earned a free kick inside two minutes that was punched out by Domermuth for a corner that also failed. After some confusion with the clock, the officials put seven seconds on it as Maple Hill had one last free kick to take at the closest distance they had had one all night. The Wildcats measured the shot and took the kick but it was blocked and deflected out by a Spartan defender and the clock reached zero as the rest of the Greenville team jumped off the bench and rushed the field.

The Greenville Spartans won the game 1-0 over the Maple Hill Wildcats to secure the 2021 Patroon Championship in the Tournament Finals and look ahead to the Sectional Playoffs as an undefeated team.

The evening began with the Coxsackie-Athens Riverhawks taking on the Catskill Cats for third place.

The pace was quick from the start with the Cats getting an early breakaway chance but Charlie Bertelle’s pass was not clean and the Riverhawks took it. C-A had an early corner kick, passing it out to Luke Barnhart who crossed it in but the header was missed by Brandon Morehouse.

Morehouse had another opportunity later but his shot went off of the keeper Daniel Forbes’ hand and hit the post. The Cats stayed aggressive on offense and drove downfield to give their defense a break after the Riverhawks got multiple shots on goal.

Chase Allen almost had a solo breakaway for Catskill but the one defender he had to beat, Matt Burhke took him down from behind and was given a yellow card. The subsequent free kick did its job by drawing keeper Sam Mozzillo out of the net, but the shot that followed went wide and out for a goal kick. In the closing moments of the half Catskill was given another yellow card, this time on Daniel Liebowitz for cursing at the official. The game was still scoreless as they reached the break.

The Riverhawks hustled out of halftime and afforded themselves more time in the Cats’ box to stay on the attack. A few minutes in, Geddy Williams slipped past the Cats’ defense on a broken play and tipped a shot just over a diving Forbes and into the goal for C-A.

With a 1-0 lead, the Riverhawks’ confidence only grew and the urgency for the Cats was evident. With less than 12 minutes left in regulation, Williams took a free kick from 25 yards out and scored his second goal of the night to add to C-A’s lead.

The Cats had their best chance of the game on a Riverhawks goal kick that they intercepted but Mozzillo made up for the short kick and fell on the ball after a weak shot came his way. Forbes had a yellow card called on him with five minutes left for coming out and just body tackling Joe Perino as he drove into the offensive zone for C-A. Gabe Hoglund dribbled in for the Riverhawks after the free kick and he crossed it for Morehouse who headed it into the net, widening the lead to 3-0 and sealing the win for C-A.

The Riverhawks defeated the Cats on their home turf to capture third place in the tournament.