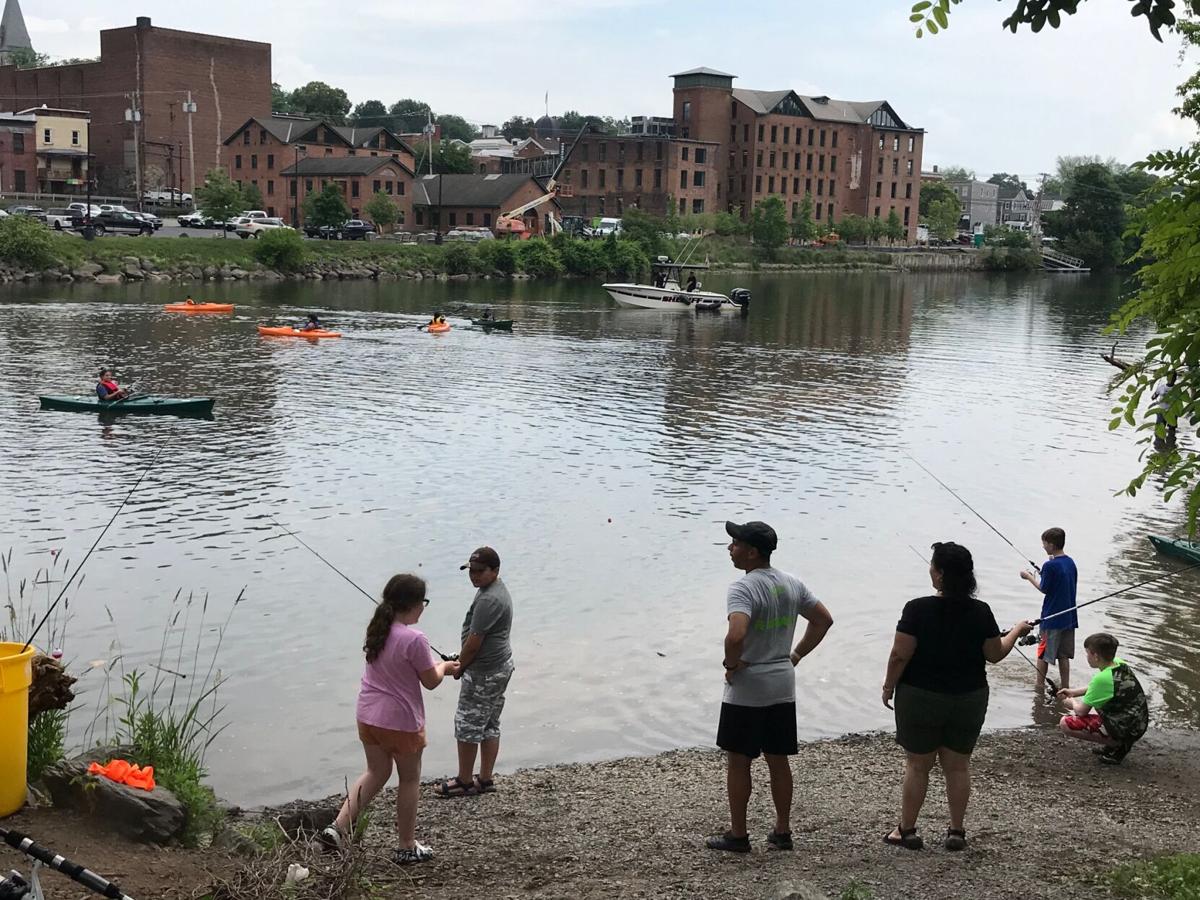 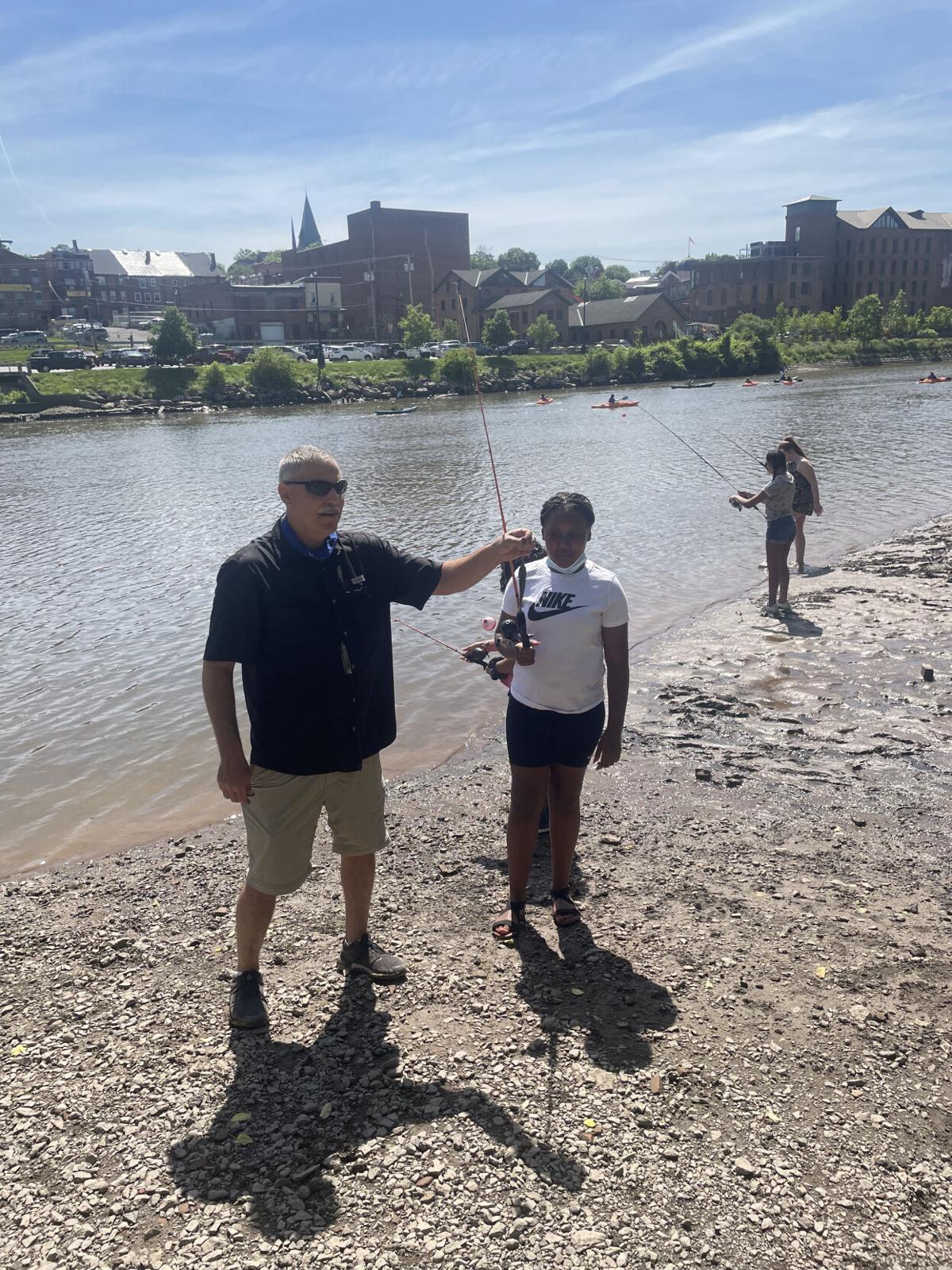 After lots of patience and persistence, a lucky Catskill Elementary student (right), caught her first fish ever at the kayak-fishing event earlier this week on the Catskill Creek with a little assistance from the author. (left).

After lots of patience and persistence, a lucky Catskill Elementary student (right), caught her first fish ever at the kayak-fishing event earlier this week on the Catskill Creek with a little assistance from the author. (left).

The Catskill Central School District (CSD) Fishing Program kicked into high gear earlier this week. On a blistering hot Monday morning, fifth-graders and their mentors paid no attention to the heat as they took to the banks of the Catskill Creek across from the high school.

The event coalesced as the first time Catskill’s Fishing Program dovetailed with their long-running Kayak Program. It took three days to get just over 100 fifth-graders fishing and kayaking through the newly joined programs.

Students took turns kayaking on the creek while the onshore squad got an abbreviated version of Fishing “101”, then commenced to fishing. They did so under the guidance of staff from Dicks Sporting Good’s Field & Stream Outdoor Education Program (which is unique to its Latham location), plus teachers and school staff doubling as freshwater fishing aficionados.

Many happy students caught their first fish as white perch, sunfish, catfish, and a solitary eel were hauled in and then released. Judging from the smiles and excitement, it’s safe to say a good time was had by all.

Seed funding in the form of a generous grant from the non-profit, Catskill Educational Foundation, enabled the creation of the Fishing Program at the Catskill District.

On-water safety for this week’s events was provided by Marine Law Enforcement patrols from the Greene County Sheriff’s Office and NYS DEC Police. ECOs and deputies on law enforcement vessels alternated days maintaining a safe perimeter. They kept a close eye on the fifth-grade kayakers as their mentors introduced them to the sport.

This week’s events on the creek would not have been possible without the efforts of Catskill Elementary School (CES) teacher, golf coach, and Aquatics Program Coordinator, Brian Smith. Brian garnered support from CES Principal John Rivers who immediately saw the value of enhancing students connecting to nature while kayaking and now fishing under Brian’s direction.

Catskill’s Fishing Program had its first event back in October of 2019 when 35 middle schoolers fished North Lake with the assistance of staff from Dicks/Field & Stream, DEC, and school employees. That was the first-time fishing was added as an activity to the “Greater Sense of Place Program” (GSOP) run by Catskill Middle School social studies teacher/outdoorsman, Dave Taylor. GSOP has been an innovative, forward-thinking program at Catskill CSD for over 40 years.

Each year, Catskill middle schoolers are introduced to the wonders of nature as well as local places of interest that exist right in their own backyard. Activities include hiking, mountain biking, and geo-caching plus much more. It also includes immersive instructional experiences at local businesses and landmarks.

The next GSOP event is scheduled for the last week of school and will include Middle School students fishing and kayaking on the Catskill Creek. Middle School Principal, Kerry Overbaugh fully supported adding fishing to the time honored GSOP program introducing kids to the many adventures that exist all around them. She also supports formation of a Middle School Fishing Club to give more depth to the program.

Needless to say, none of this could have taken place without Superintendent Dr. Ronel Cook being a big proponent of the fishing and aquatics programs, as well as GSOP. His support led to Catskill’s Fishing Program gaining a more permanent status by taking shape as the Middle School Fishing Club.

Once fully formed, Field & Stream’s Outdoor Education staff will teach Fishing “101” in the fall and work with faculty advisers to further develop student skill sets not just for fishing techniques, but to impart awareness of the sensitivity of marine habitats and the species they support.

Getting kids connected to the outdoors is a critical component of the proposed Fishing Club.

Richard Louv’s treatment on the topic in his renowned 2005 literary work, “Last Child in the Woods; Saving Our Children from Nature Deficit Disorder,“ has been described as one that, “…documents decreased exposure of children to nature in American society and how this ‘nature deficit disorder’ harms children and society.”

While we should not be unduly alarmed at the seemingly growing trend where kids and adults grow less connected to the natural environment, it remains a topic of concern. Kids especially are spending an inordinate amount of their time on screens, and according to the author, often view nature as a distant intangible not recognizing the abundance of the natural world all around them.

They’re likely to be more familiar with problems like disappearing rain forests or the plight of dwindling African Elephant populations on a global conceptual level rather than recognize serious threats and destruction of their environment right where they live.

Fishing, aquatics, and innovative program like GSOP help immerse students in the beautiful and often sensitive ecosystems right in their own neighborhoods. Our surrounding woods, waters, wetlands and mountains offer cheap and often times free opportunities to safely explore local wonders of nature.

Let’s help kids, their parents, and teachers, safely connect them to the outdoors so we ensure “The Last Child in the Woods” won’t be one lucky enough to have been a Catskill student.

Happy Hunting, Fishing, and Trapping until next time.

*If you have a fishing, trapping, or hunting report, photo, or event you would like to be considered for publication, send it to: huntfishreport@gmail.com