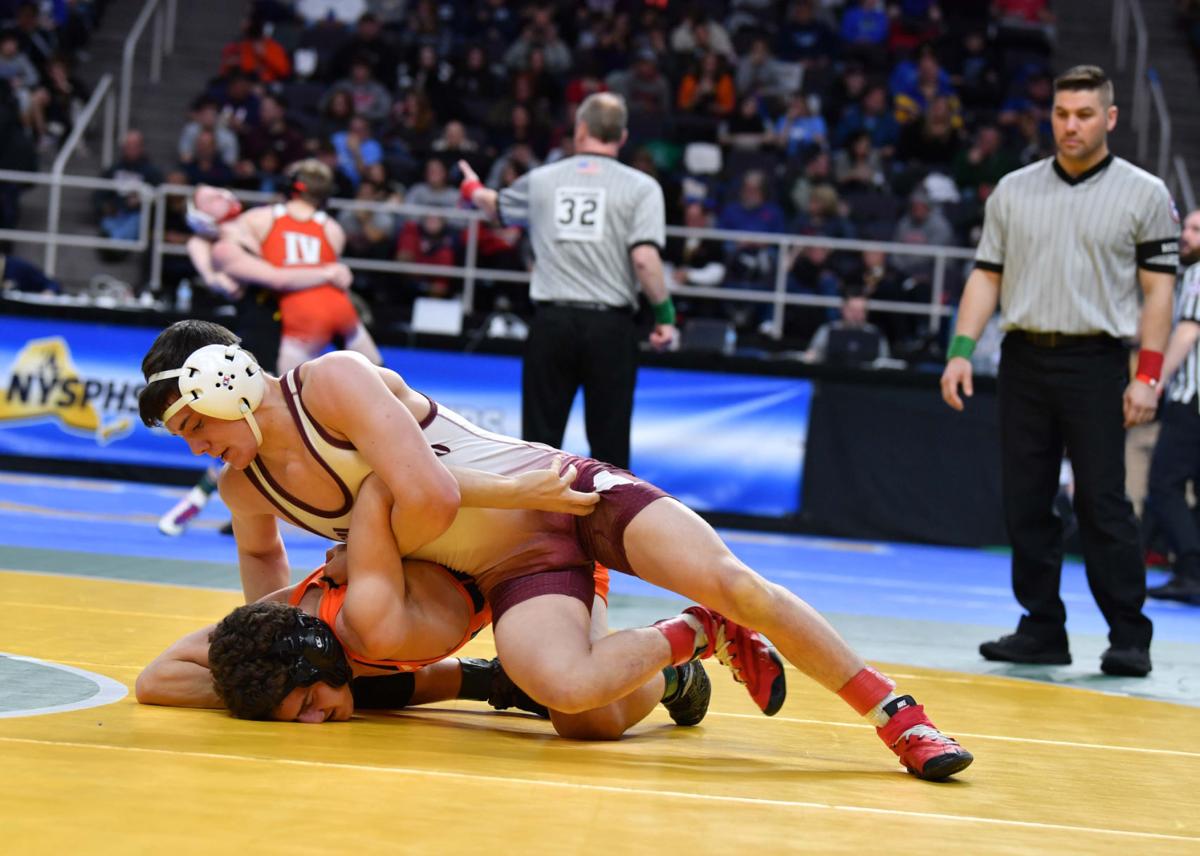 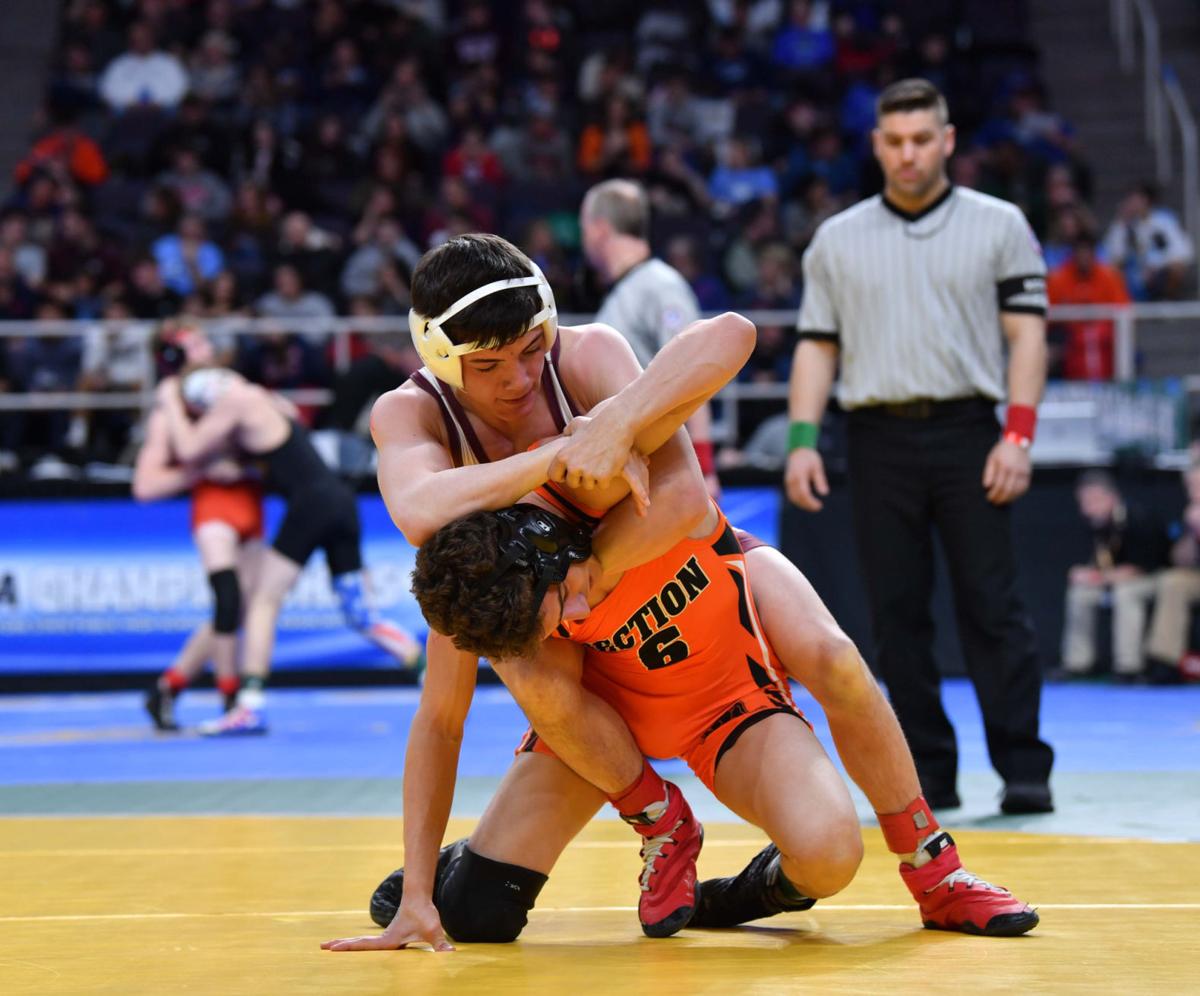 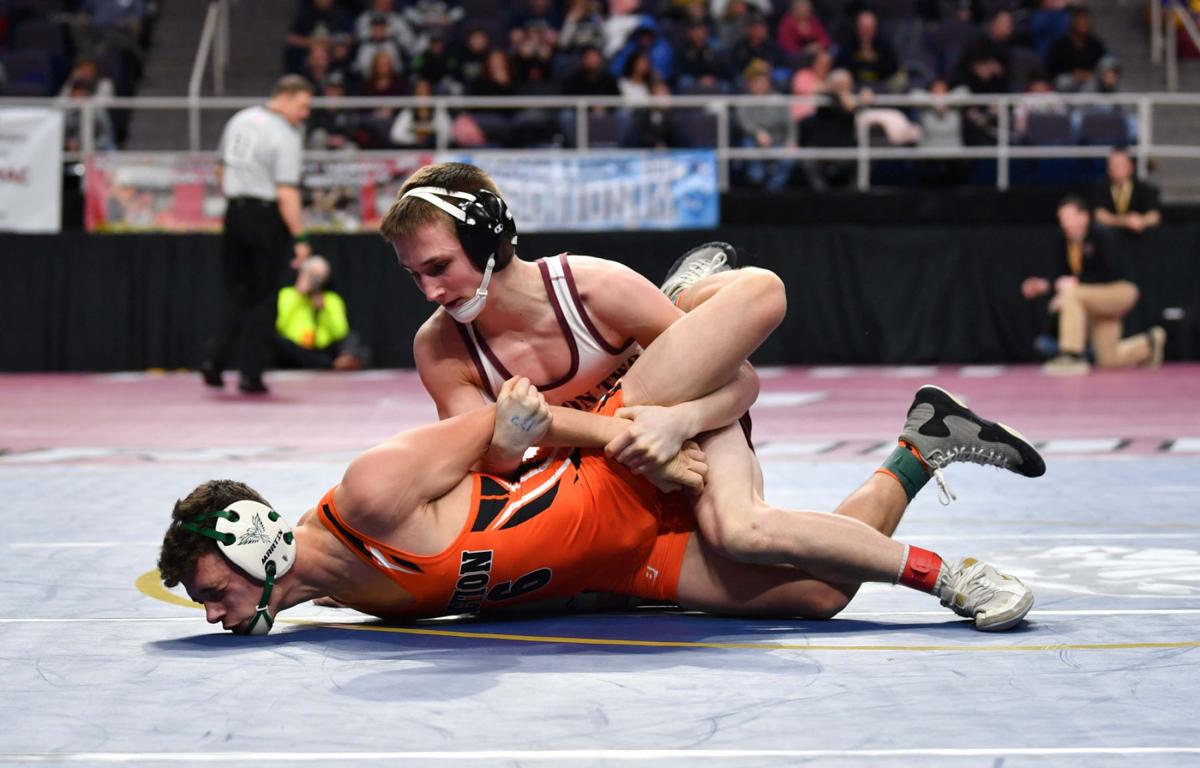 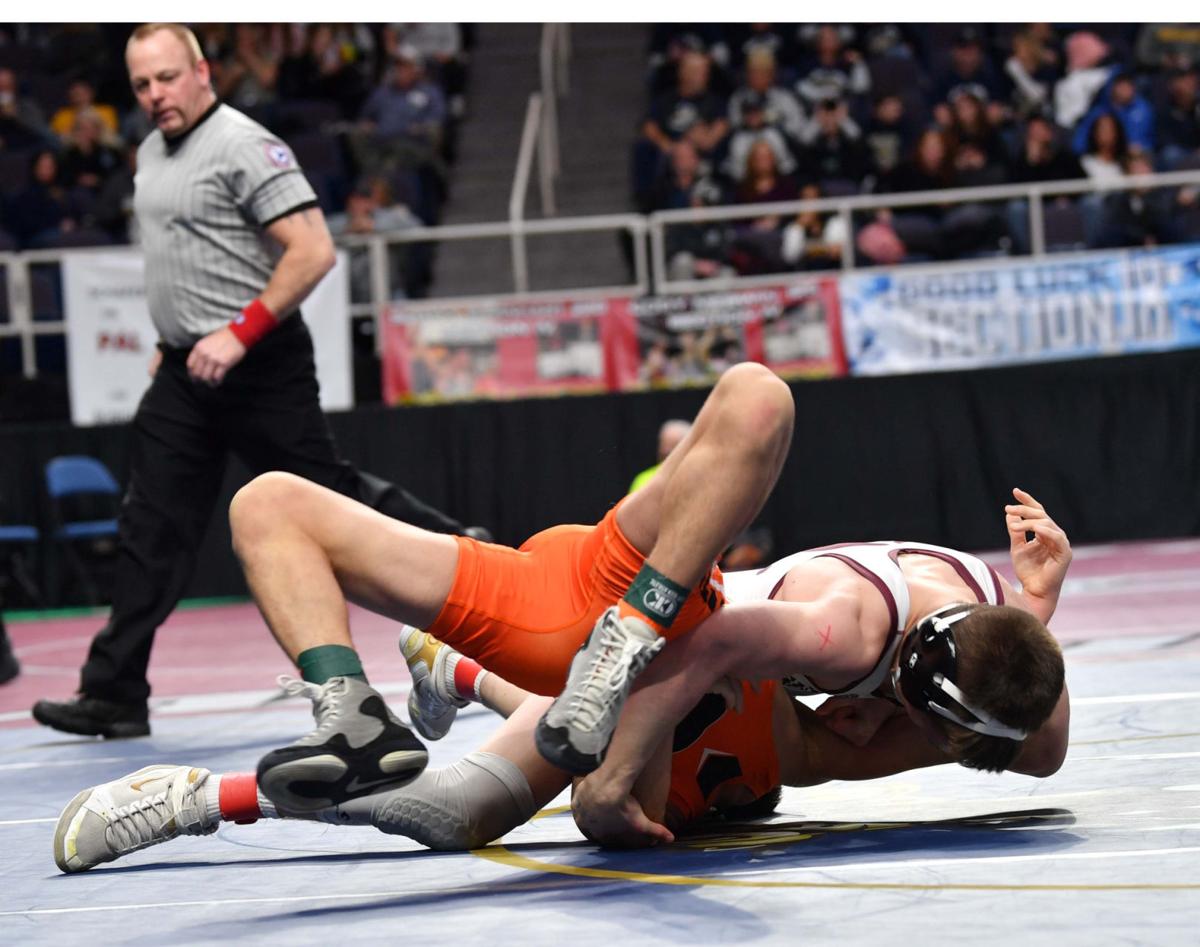 Nikki Freeman photoGreenville’s Aidan Cullen (top) in action against Julian Martin of Lake Shore in the New York State Wrestling Championships at the Times Union Center in Albany on Friday. 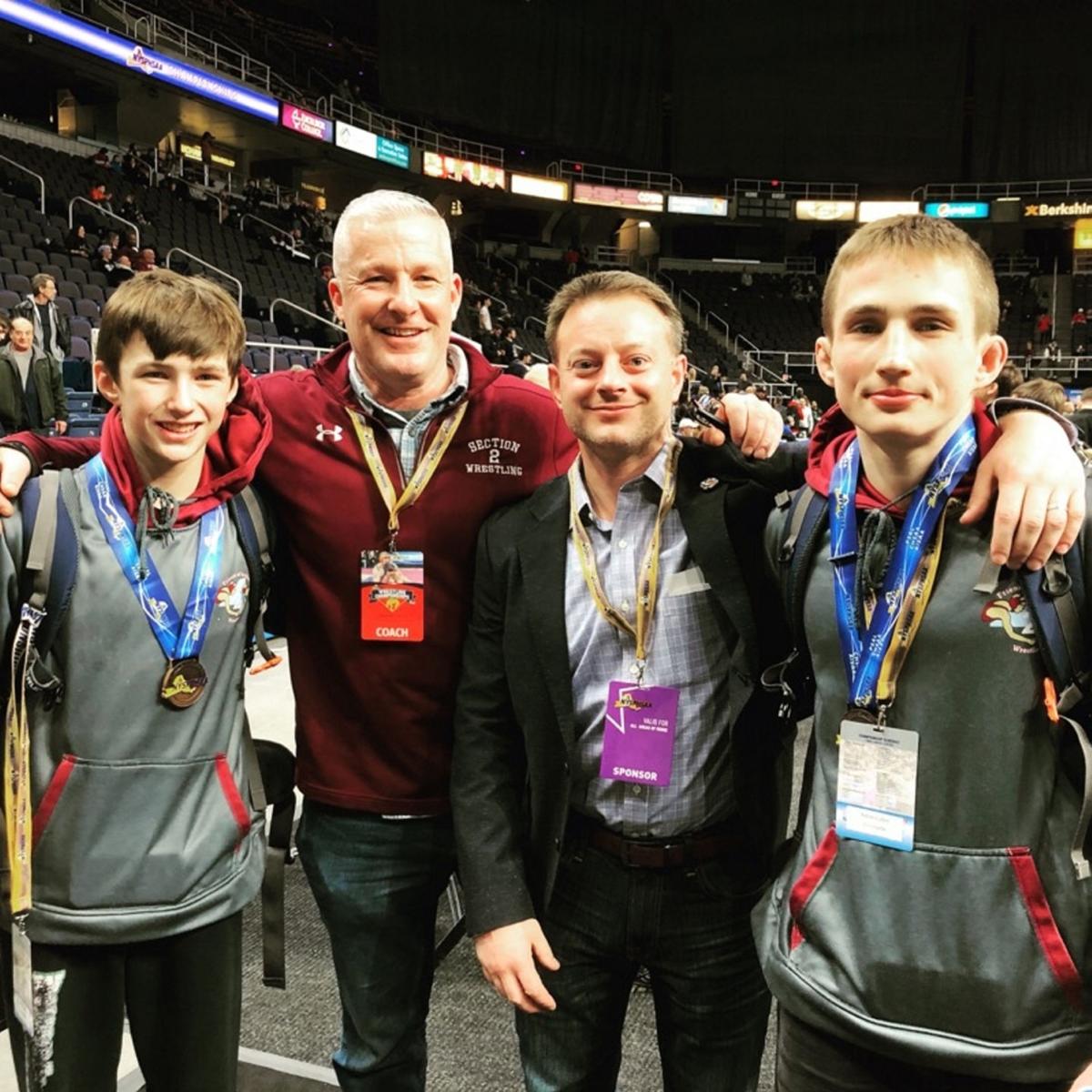 Nikki Freeman photoGreenville’s Aidan Cullen (top) in action against Julian Martin of Lake Shore in the New York State Wrestling Championships at the Times Union Center in Albany on Friday.

ALBANY — All five local wrestlers finished in the top eight of Division II at the New York State Wrestling Championships at the Times Union Center over the weekend.

Maple Hill’s Caleb Svingala had the top finish for the local grapplers, placing third in the 126-pound division.

Svingala pinned Alex Skowronski of East Aurora-Holland in 5:32 in the first round, then took a 7-0 decision over Kyle Willard of Groton in the quarters to advance to Saturday’s semifinal round.

Svingala tasted defeat for the first time this season when he lost to Lowville’s Micah Roes, 5-3, in the semis. He bounced back to win a 6-1 decision over Jordan Soriano of Clarke in the consolation semis, then nailed down third place with a 5-2 decision over Cody Merwin of Walton/Delaware Academy.

Svingala finishes the season with a 46-1 record and his coach at Maple Hill, Tom Gibbons, couldn’t have been prouder.

“Caleb had an outstanding performance this weekend at states,” Gibbons said. “He was in a loaded weight class (one returning state champion and two state runners-up, including Caleb). Four wins and one loss at states is an amazing accomplishment. He lost by two points in the semifinals and then came roaring back with two wins to place third, which shows his toughness and determination.

“We all are super proud of Caleb’s performance this weekend and his whole body of work in his varsity career. Over 200 wins, four-time class D champion, four-time Section II Champion, and two-time state place finisher.”

The Cullen brothers, Aidan and Kieran finished fourth and eighth in their respective divisions.

Aidan Cullen started off with pin of Julian Martin of Lake Shore in 1:42 in the 132-pound division. He earn an 8-5 decision over Alex Chrisman of Saranac in the quarters, then lost a 5-3 decision to eventual champion Gage DeNatale of Locust Valley in the semifinals.

Aidan went on to post a 4-0 decision victory over Mitchell Gaiser of Alexander in the consolation semifinals, then lost to Marek Bush of Central Valley Academy, 3-0, to finish fourth.

He finished his senior season with a 42-11 overall reocrd.

Kieran Cullen, an eighth-grader, pinned Brayden Wall of Ogdensburg in 1:29 ion his opening match, then lost a 10-3 decision to Caden Bellis of Tioga in the quarterfinals.

Kieran pinned Matthew Shaw of Pearl River in 2:40 in the second wrestlback, then was pinned by Carl Santariello of Marcellus/Onondaga in 4:39 in the consolation quarterfinals. In his final match, Kieran was pinned by Joey Florance of BGAH in 2:19 to take eighth place.

He finishes with a 43-9 overall record.

Ichabod Crane’s Jair Gomez took seventh place in the 99-pound weight class. He earned a 9-5 decision over Chase Nevills of Copenhagen in the first round, then was pinned by Xavier DeJesus-Remchuk of Canisteo-Greenwood in 3:41 in the quarterfinals.

Gomez posted a 4-1 decision over Trevor Tufano of Port Jervis in the second wrestleback, was pinned by Aiden Gillings of Newfane in 2:15 in the consolation quarterfinals, then earned a 9-5 decision over Cameron Mayfield of Eagle Academy to finish seventh.

Gomez compiled a 40-3 record this season.

Coxsackie-Athens’ Logan Campbell placed eighth in the 113-pound weight class in his first trip to states.

Campbell opened with a 14-4 major decision over Ryan Ross of Port Jervis in the first round, then lost a 7-2 decision to Bryar Goniser of Adirondack in the quarterfinals.

He pinned Jackson Waineright of Our Lady of Lourdes in 4:15 in the second wrestleback, dropped a 4-1 decision to David Ball of Fredonia in the consolation quarterfinals, then lost a 5-0 decision to Michael Schifhauer of Iroquois to place eighth.

Campbell finished with a 37-6 overall record.

“We thought that Logan performed well, earning his place on the podium,” Coxsackie-Athens coach Ryan Palmer said. “It is certainly an accomplishment not only making the State Tournament, but placing on your first trip. Logan earned 8th place, end his season with a 37-6 record. I am sure that he would’ve liked to place higher, but who wouldn’t.

“That arena was filled with hungry competitors that put in timeless hours to win this tournament specifically. I know that Logan is proud of his accomplishment, but I also know that he wished that he had done better. That is what we enjoy about him. It is fun coaching a kid, or group of kids, that are always hungry to do better.

“Fortunately for Logan, he is a junior and has another chance to do better. Logan was an eighth-grader during my first year at C-A, when I was just the new teacher looking to help out with the wrestling program. As a young fella to an adolescent, and as a wrestler in general, the transformation of Logan is unbelievable. He earned his 100th win this year, his first Class C title, and his first Section II title (second in program history, in as many years). It has been a fun season, and now we will turn our efforts to prepare him and the rest of the Coxsackie-Athens Wrestlers for the off-season and the National Tournament in Fargo.”

Palmer was proud of how the other Patroon wrestlers fared.

“Our conference represented well, putting four on the podium for the second straight year. Very cool experience for kids like ours from small towns. The community support has been great all around. The two Cullen boys put together solid performances, becoming Greenville’s first State place finishers (Aidan — third and Kieran — eighth). Caleb put together another solid performance, placing third and concluding an unbelievable high school career.

“While I certainly won’t miss Caleb and Aidan scoring six team points against us every time we wrestle, I do wish them the best and congratulate them on their careers. All of us at Coxsackie-Athens wish them the best as they move on to wrestle in college. As for Kieran, we’ve got 4 more seasons to enjoy watching him get better and representing our conference.”