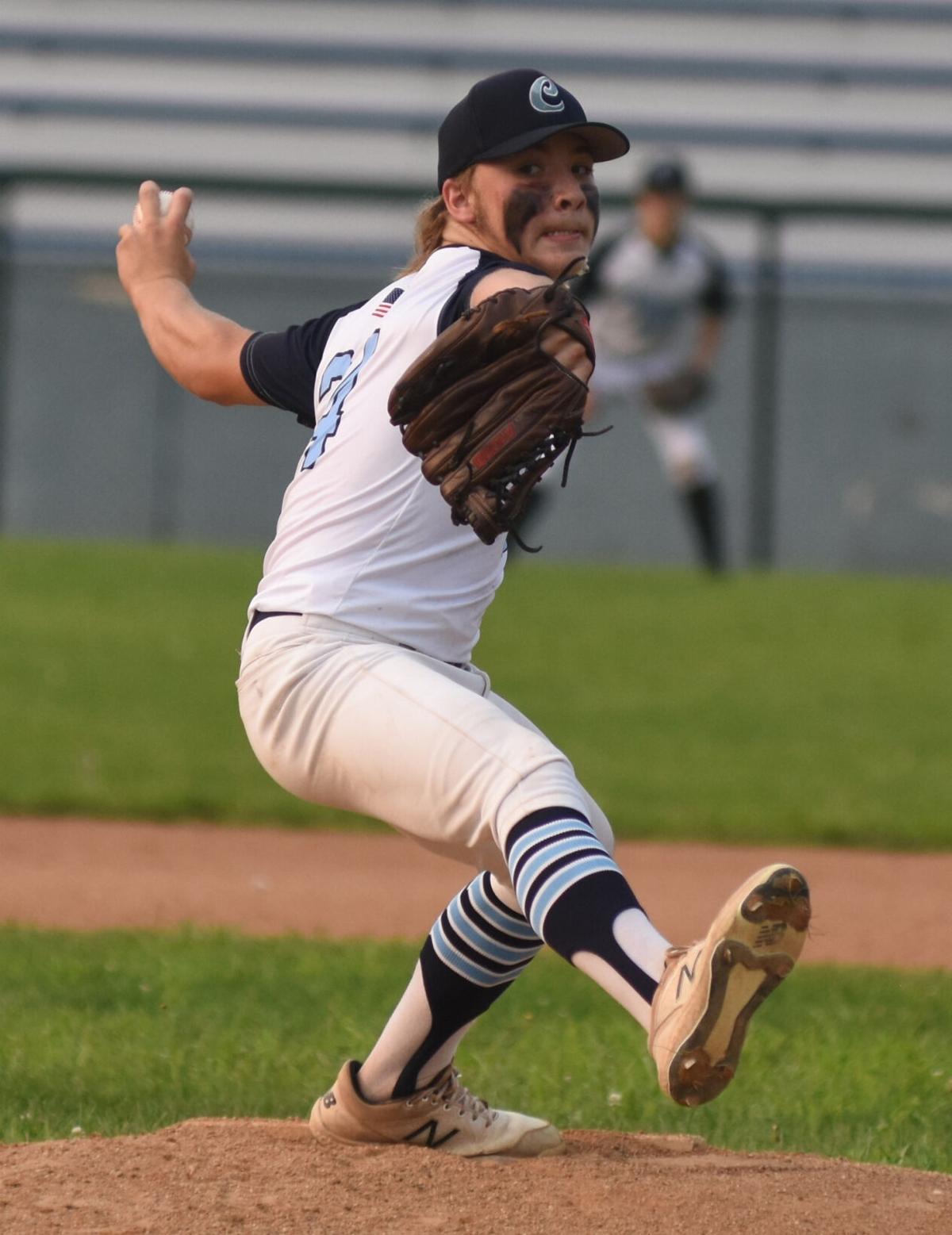 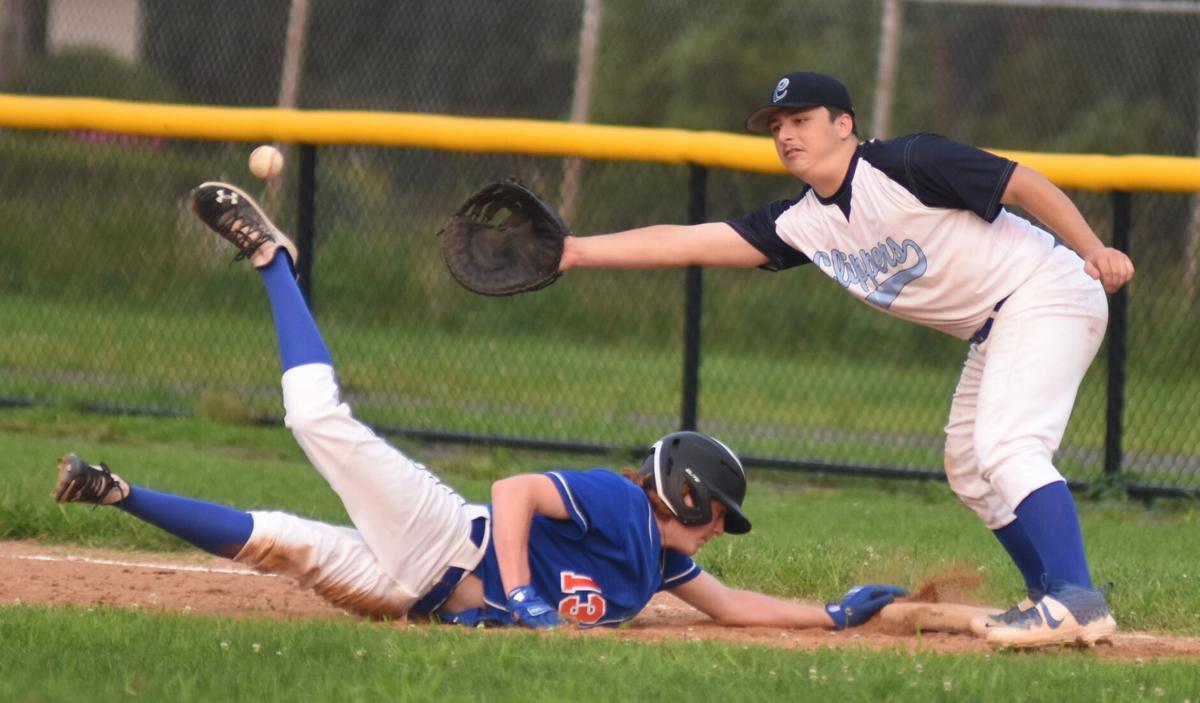 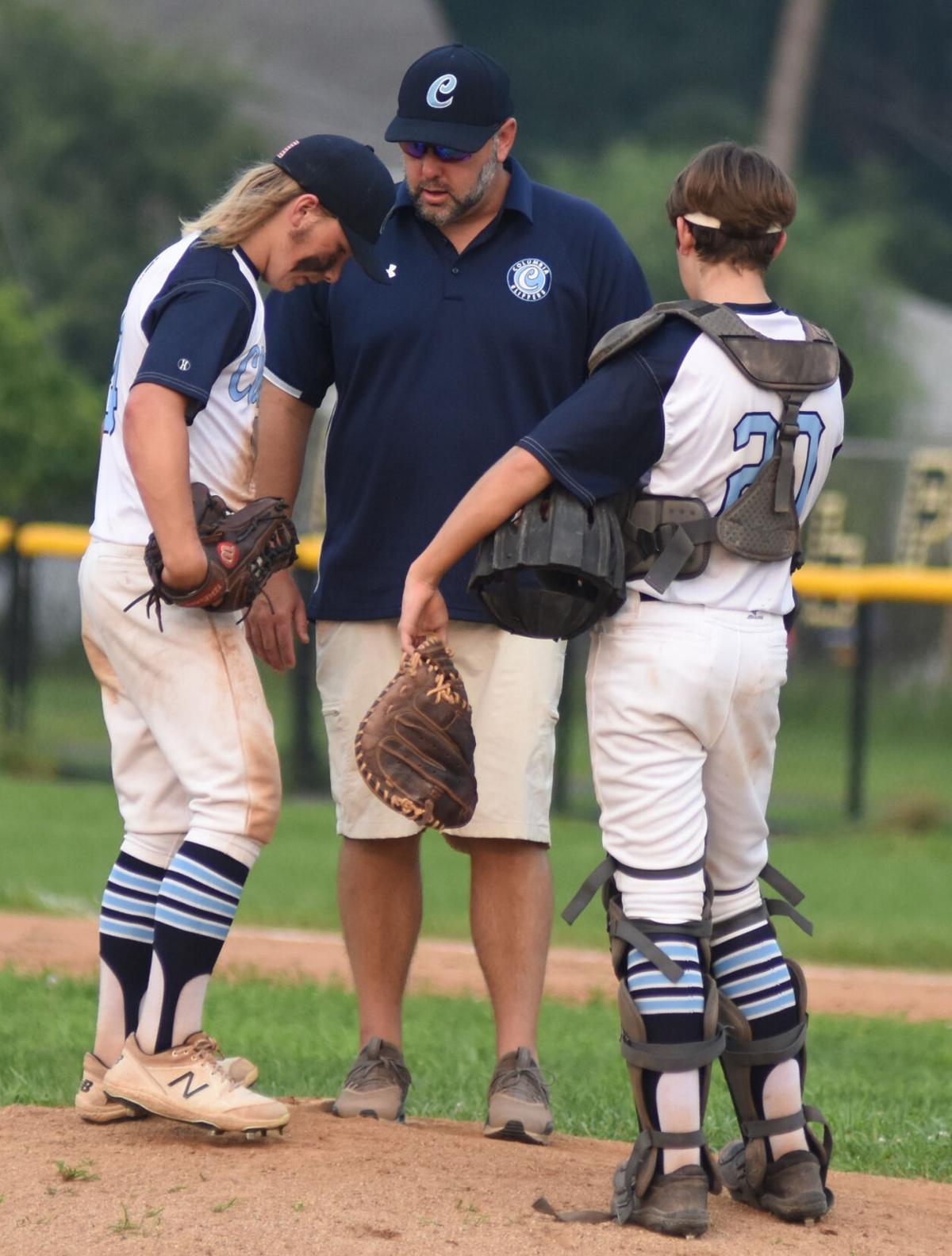 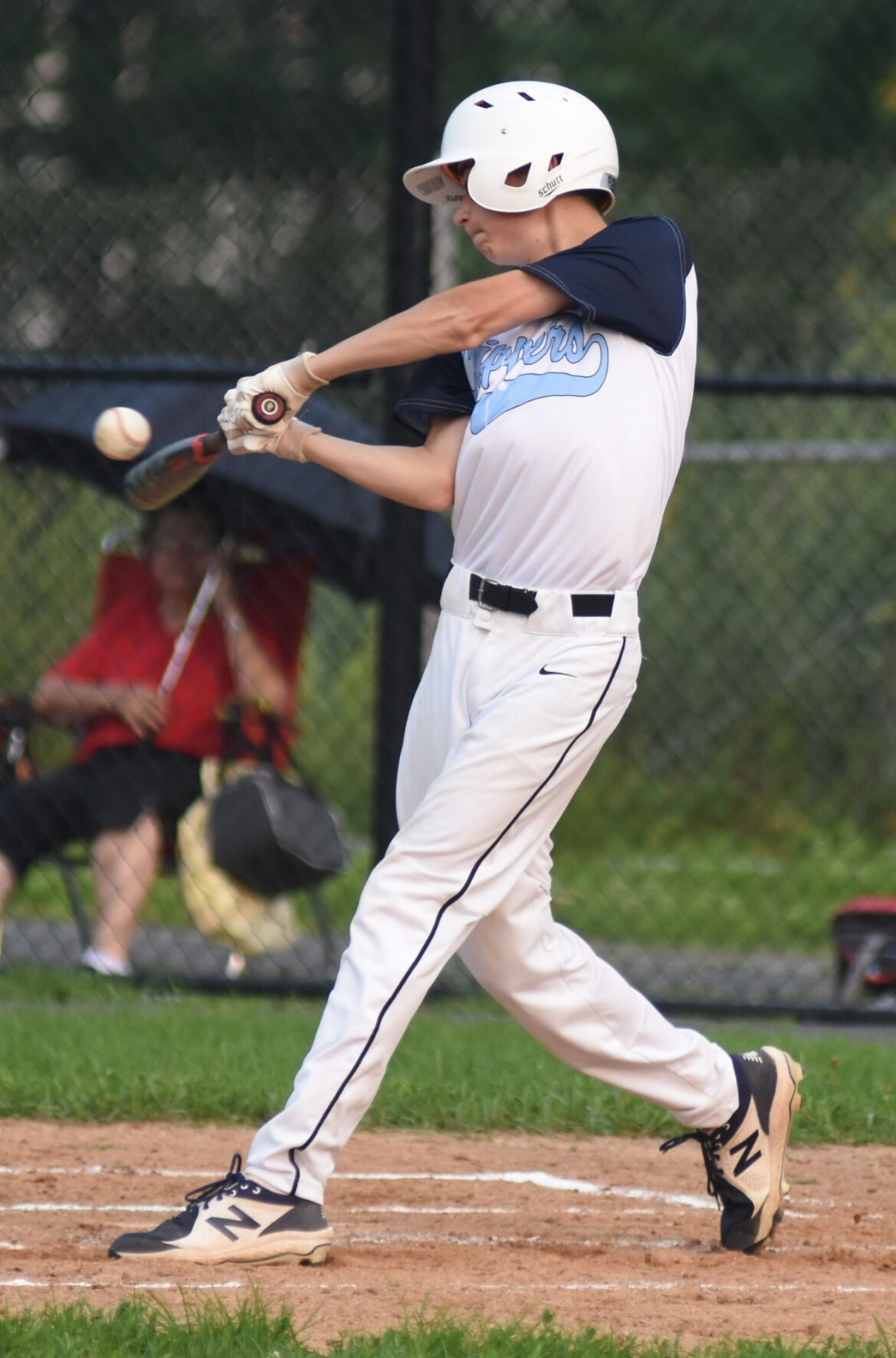 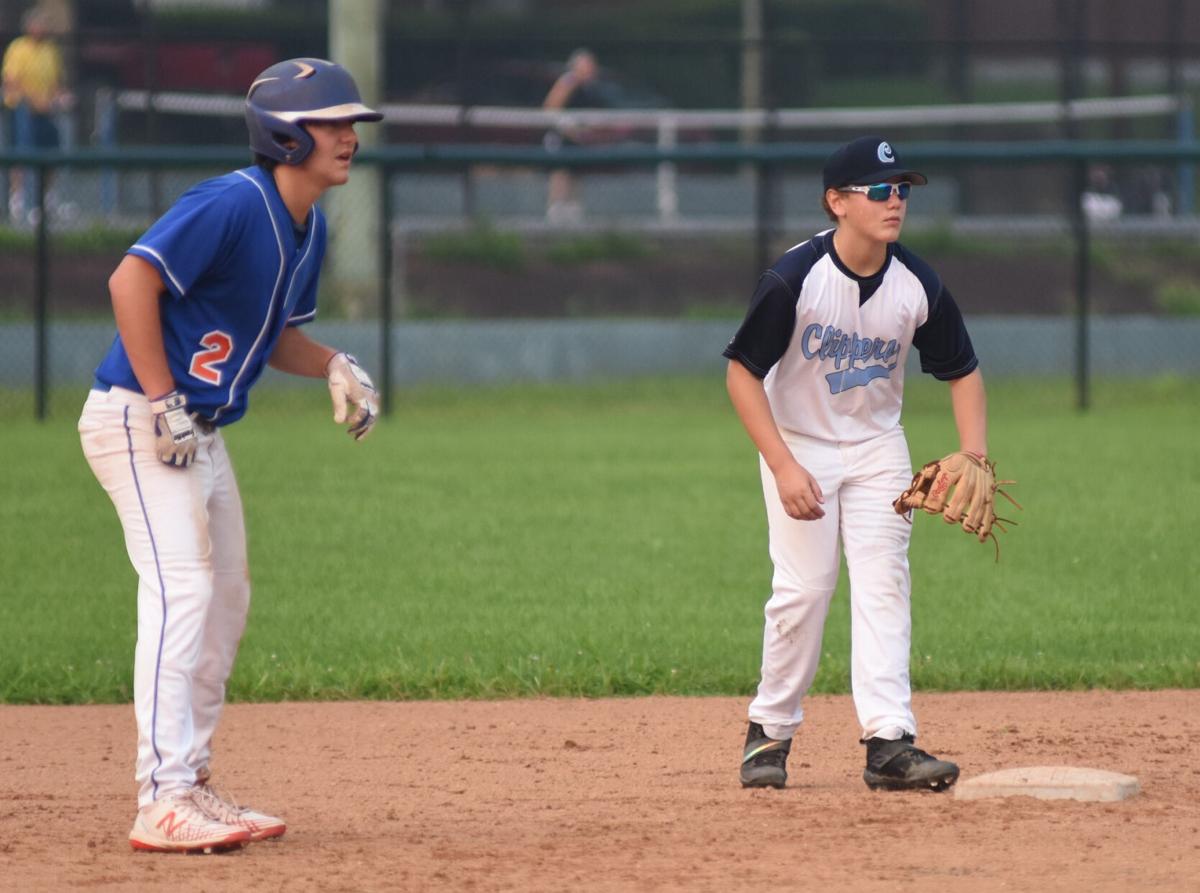 Tim Martin/Columbia-Greene Media A NE Hurricanes baseruner leads off of second base as Columbia Clippers 14U second baseman Antonio Troy slides over for a possible pick-off attempt during Tuesday’s travel baseball game at Montgomery C. Smith Elementary School in Hudson.

Tim Martin/Columbia-Greene Media A NE Hurricanes baseruner leads off of second base as Columbia Clippers 14U second baseman Antonio Troy slides over for a possible pick-off attempt during Tuesday’s travel baseball game at Montgomery C. Smith Elementary School in Hudson.

HUDSON — The NE Hurricanes broke up a tie game with six runs in the top of the fifth inning and went on to defeat the Columbia Clippers 14U, 11-7, in Tuesday’s travel baseball game at Montgomery C. Smith Elementary School.

The Clippers jumped out to a 3-0 advantage in the second inning, but the Hurricanes surged ahead with five in the third. The Clippers evened the score at 5-5 with two in the fourth, before the Hurricanes took the lead for good with their fifth inning uprising.

L.J. Morse ripped three doubles and drove in a run to lead the Clippers’ 11-hit attack. Jacob Ormerod added a double and single with an RBI, Hunter Kelly collected two singles, Connor McDarby, Matt Munro and Ashton Hotaling each singled and drove in a run and Alberto Rivera singled.

Morse started on the mound for the Clippers and pitched four innings, striking out six, walking four and allowing five runs and five hits. Connor Morrison finished up, walking five and surrendering six runs, only one of which was earned, and three hits.

Derrick Dellea fired a one-hit shutout with 12 strikeouts to lead the Columbia Clippers 15U to a 5-0 victory over the Devils Cats 15+ in Tuesday’s travel baseball game.

Lindsay Martin went 3 for 3 with an RBI to back the complete game pitching performance of Lily Kritzman as the Chatham Lady Reds Rage 16U defeated the Latham Cyclones in Tuesday’s travel softball game.

Kritzman struck out eight, walked two and allowed five runs and eight hits in going the distance for the win.

Grace Alvarez added a double to the Lady Reds’ nine-hit attack. Addi Perry had two singles and two RBI, Courtney Danforth and Grace Brennan both singled and drove in a run and Kritzman singled.

Cicero-North Syracuse scored three runs in the bottom of the sixth inning to overtake Chatham, 14-13, in the opening round of pool play at the New York State Little League Softball 8-10 year-old Championships in Rochester.

Chatham led by as many as six runs twice in the contest, but Cicero-North Syracuse kept chipping away, pulling to within 13-11 in the fifth, then plating the winning runs in the sixth.

Laney Steltz turned in a strong performance on the mound before leaving in the fifth, striking out five. Abigail Scheriff finished up.

Riley Pulver tripled and Lola Lezama had a two-run double for Chatham.

Pool play continues on Wednesday as Chatham meets Brighton at 6 p.m., before taking on Mid Island on Friday at 4 p.m. and Fredonia on Saturday at 3:30 p.m.