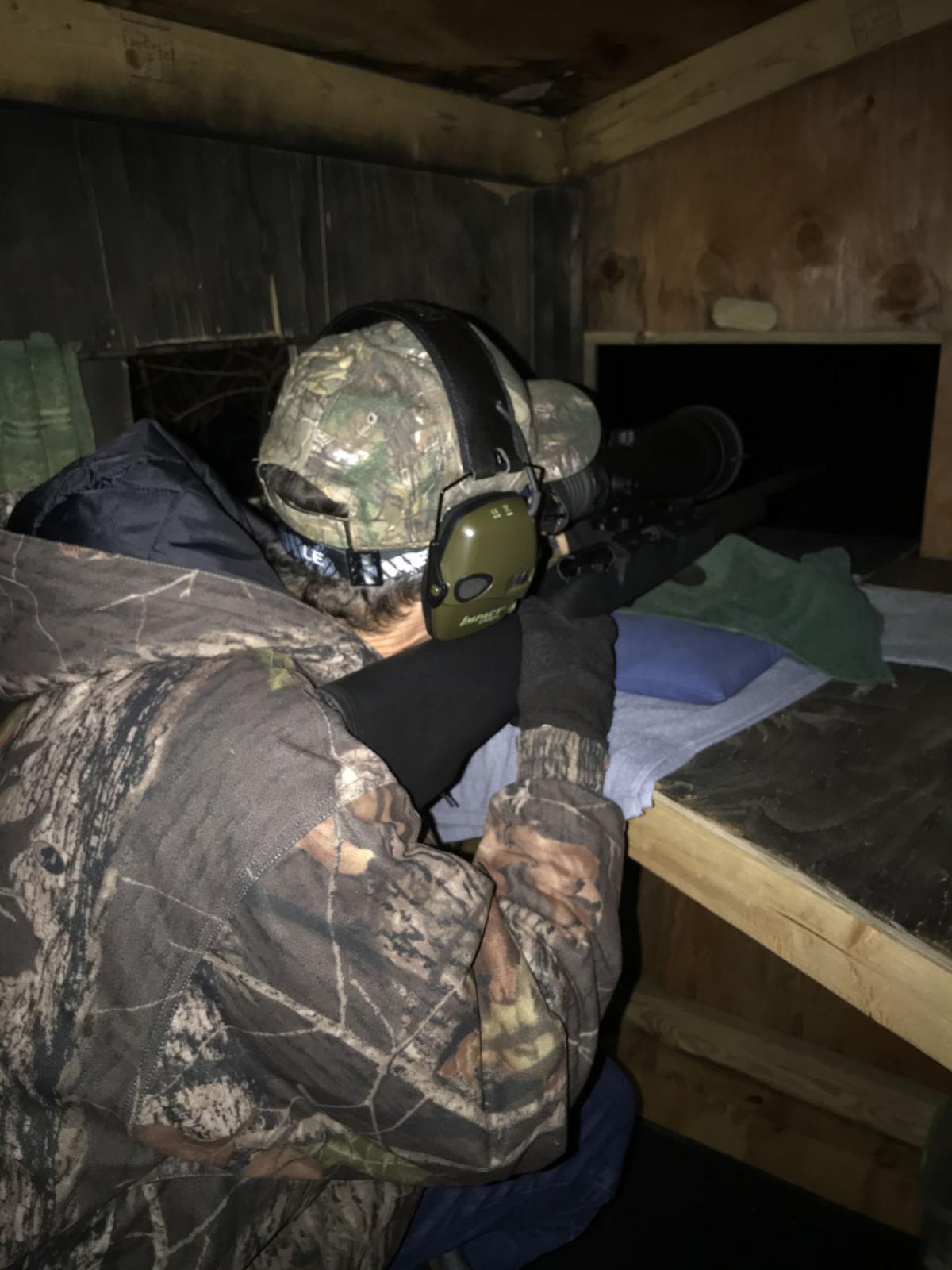 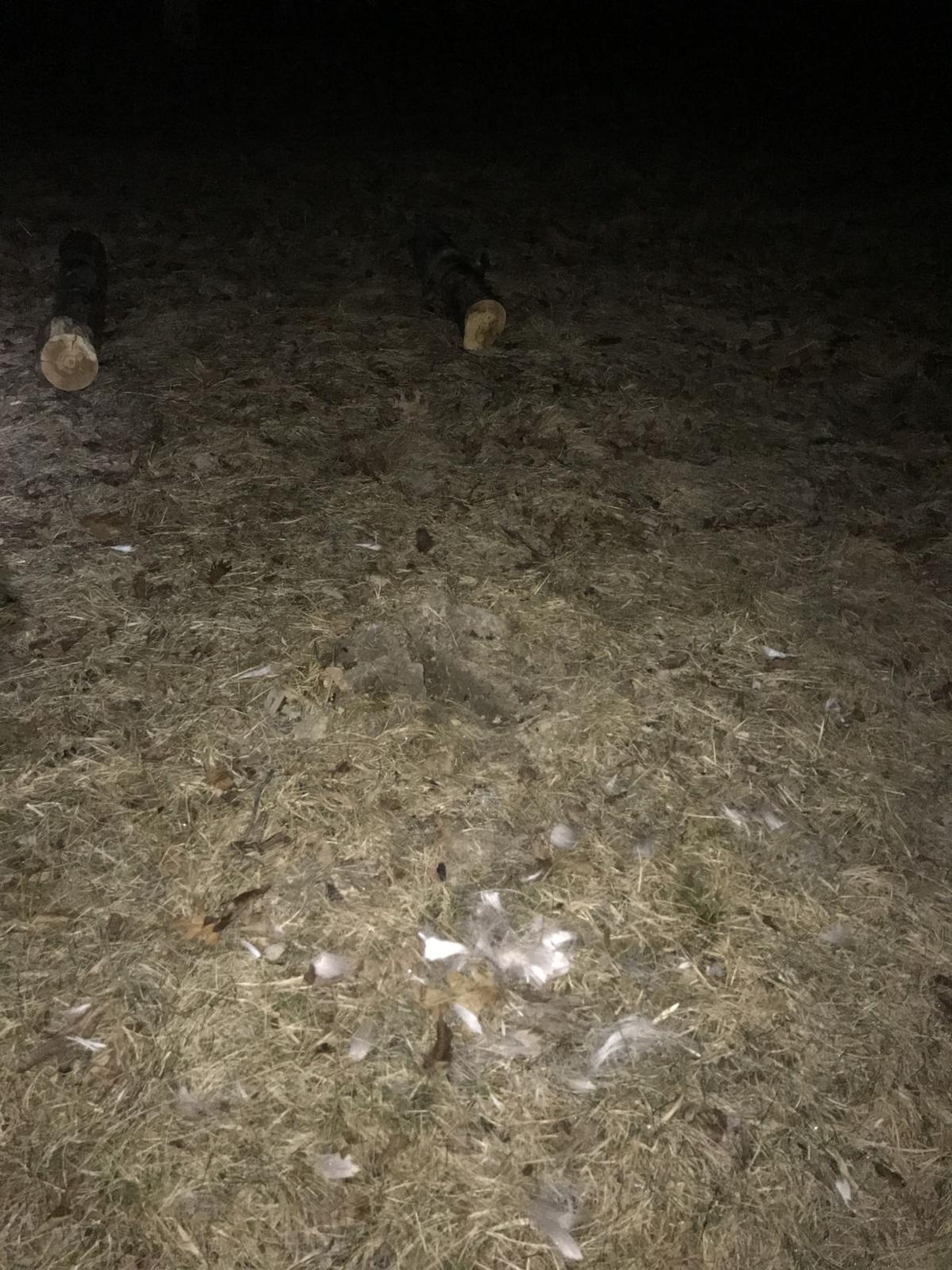 Photo contributed This site is baited with small venison scraps, some of which were buried and dug out by coyotes and other predators. Note the placed deer hair in the foreground and the logs which have larger chunks of venison placed under their weight to simulate remnants of a deer kill.

Photo contributed This site is baited with small venison scraps, some of which were buried and dug out by coyotes and other predators. Note the placed deer hair in the foreground and the logs which have larger chunks of venison placed under their weight to simulate remnants of a deer kill.

On January 30, DEC released tips on how to avoid conflicts with coyotes in NY. If you would like to view their common sense recommendations to safeguard pets and avoid close encounters with the ever-adaptable and resourceful coyote, they are available at https://www.dec.ny.gov/press/119388.html.

If you really want to avoid coyotes, another option may be to move next door to a hunter like Frank Algozine of Cairo. The retired Greene County Real Property Tax Assessor has been hunting coyotes and other furbearers in earnest for the past 12 years.

He reached a few milestones earlier this season shooting his 175th coyote and 300th overall predator. Nearly all were taken within a few square miles of his home.

One incident that prompted Frank’s coyote hunting “career,” was when he witnessed his neighbor’s dog being attacked by a coyote on his front lawn.

That was followed by another incident where he observed four coyotes in the adjacent field surround a sow and its cub. After the pack worked in concert to separate and run off the sow, one of the coyotes quickly grabbed and killed the cub.

Frank is certain he’s made an impact upon the local coyote population. He is confident his consistent removal of coyotes in the area prevented high populations from having a dramatic detrimental effect upon local deer and wild turkey numbers. DEC literature documents coyote predation upon fawns, other wildlife, and occasionally adult deer.

While the numbers of coyotes and other predators he has taken speak for themselves, Frank describes his success in these terms: “It’s in the hundreds of deer, fawns, turkeys, small animals, farm animals, and family pets that were not killed by coyotes as a result of my hunting them.”

Over the years Frank has refined his hunting techniques. He embraced technology to increase his effectiveness. His preferred rifle for coyotes is a .223 cal. Rock River Arms AR-15 fitted with an ATN Gen 3 night-vision scope.

For other predators and for use in daylight, he prefers a Savage bolt action in .17 HMR or 22-250 with an 18X Bushnell scope.

Frank employs live, high-definition night vision-equipped video cameras that extend from the immediate perimeter of his home out to the adjacent fields and woods he routinely hunts.

They monitor motion and heat sensing transmitters placed around the house and over baited sites with a 24/7 live feed to alarms in the home. They also transmit to a mobile hunting shed he built on a small utility trailer.

Frank was kind enough to give me the full tour of his coyote hunting operation and I must say I was impressed with its tactical efficiency. It was solidly based on wildlife science and documented real-life hunting experience. His success is proof of his theory.

Although the equipment and security/surveillance systems he has built and acquired over the years is admittedly expensive, those looking to start coyote and predator hunting don’t have to break the bank.

Frank has a few recommendations for those new to hunting coyotes and furbearers.

Use an enclosed blind/shed/barn with a portable propane heater.

Hunt at night watching a scented and baited area.

**You can also hang bait in a tree which adds the effect of extending scent without it ever being consumed.

Use a “Guardline” or “Dakota” brand wireless outdoor motion sensor & detector or similar device on the bait pile that will trigger an alarm in your blind. (Cost is about $100.00 for a pair). When the alarm goes off (and it will) turn on your red predator light or night vision scope and make a good shot.

Frank continued, “You won’t be bored, because not just coyotes will show up, other lawful predators will be regular visitors.” He cautions to positively identify your target as a legal wild furbearer. “When in doubt…let it pass!”

You can use electronic game callers, fawn in distress, dying rabbit, turkey and coyote calls but says mouth calls will work just as well.

He recommends, “If you want to try calling coyotes in the early morning or just before dark…watch the expert videos of” Downwind Outdoors” which are available for free online.

A few final pointers when placing bait include cutting meat into small pieces, spreading them along with deer hair over the ground. Be sure to bury a portion of them and place larger pieces under logs.

That, along with the buried bait, makes the coyotes work for their meal spending enough time in the process for a well-placed shoulder shot. Hits in the ribcage, although likely fatal, may result in not finding your quarry. Place the logs perpendicular to your perch to encourage focus away from your blind.

Happy Hunting, Fishing and Trapping until next time.

“DEC Sued Over Hiring of Rivers.”

The two, along with several other captains and majors who have not joined the suit, were on a certified NYS Civil Service list and interviewed for the position of Director of Law Enforcement within DEC. While awaiting selection for the position, the litigants, in addition to the other captains and majors, were all advised that then, Captain Bernie Rivers, who had not passed the civil service exam, had received a political appointment to the top post.

DEC had the director’s position reclassified out of civil service to allow for the political appointment of Bernie Rivers who now serves as Director of the Division of Law Enforcement.

Joe and Chris Nastke of Shooters Sports reminds all that fur buyer, Ron Alund will be paying fair prices for fur at the store in Valatie on February 8th and every second Saturday in February, March, and April 2020 from 10 a.m.-2 p.m.

This 4-man team event will start at 7 a.m. and end at 3 p.m. on Saturday February 8. Sign-up from 6:30-8 a.m. Doughnuts, coffee, food and beverages will be available. Cash prizes will be awarded to winning teams accumulating 3 points for partridge (grouse), 2 points for per rabbit, and 1 point per squirrel harvested. For more information contact Event Chairman Eric Nelson Jr. at 518-339-3557 or Jim Bertram at 518-965-3971.

Sign-in begins at 9 a.m. with youth fishing from 10 a.m.-noon. There will be prizes for all kids attending, plus refreshments will be available. For more information call Bob Monteleone at 518-488-0240.

This event will take place (ice conditions permitting) on February 15 from 6 a.m.-1 p.m. at Queechy Lake, Canaan, NY. Register online at https://canaanconservationclub.weebly.com/ or, in-person at 6 a.m. on the day of the event at Adams Point Beach. Entry fee for adults 16 and over is $15 and $5 for kids 15 and under.

Three cash prizes for largest trout, perch, pickerel, and crappie with a gas-powered auger standing in for the grand prize. Other prizes include hand augers, tip-ups and jigging poles. For more information contact Julia Horst at 518-567-4302 or by email at canaanconservationclub@yahoo.com