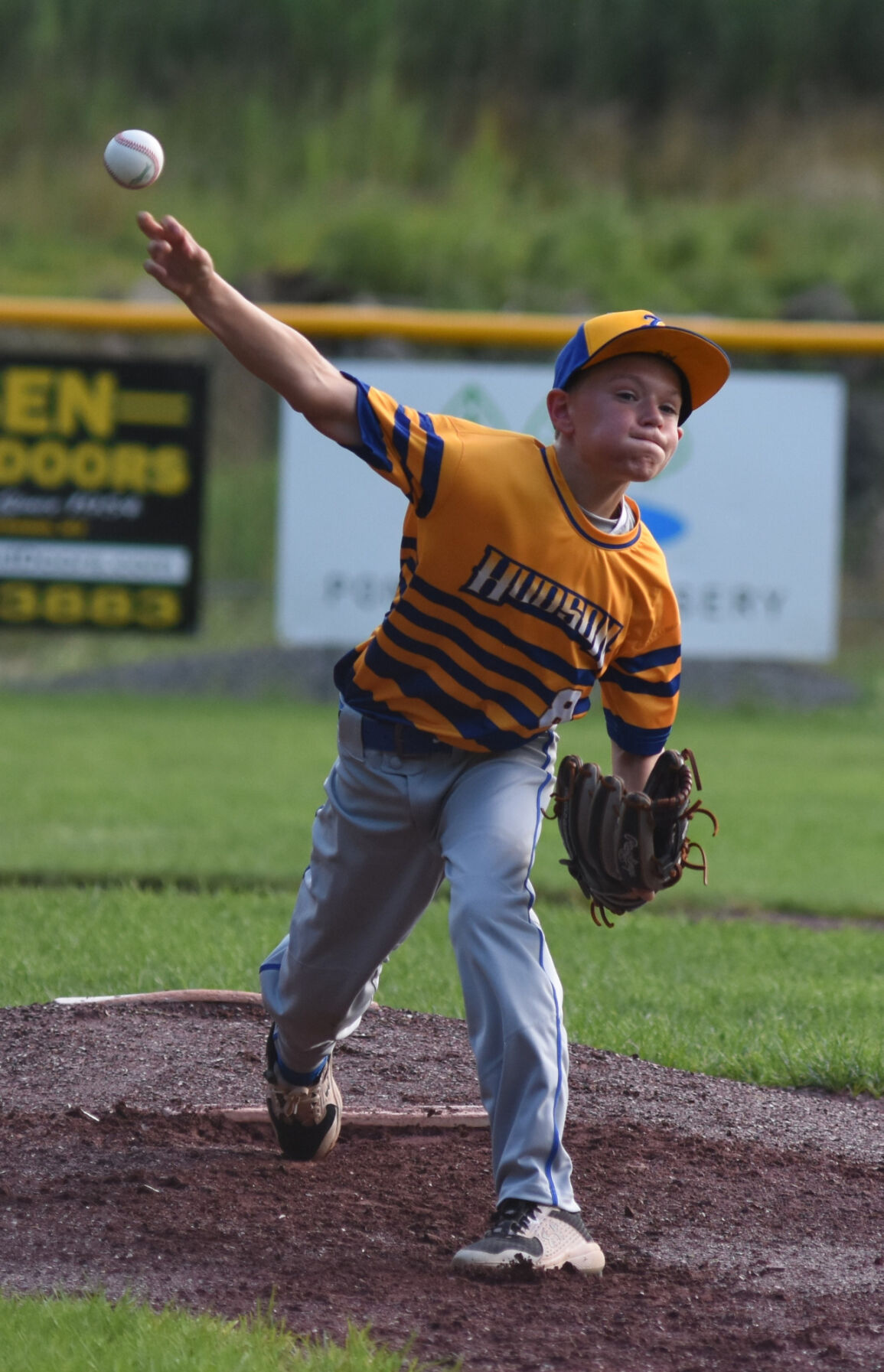 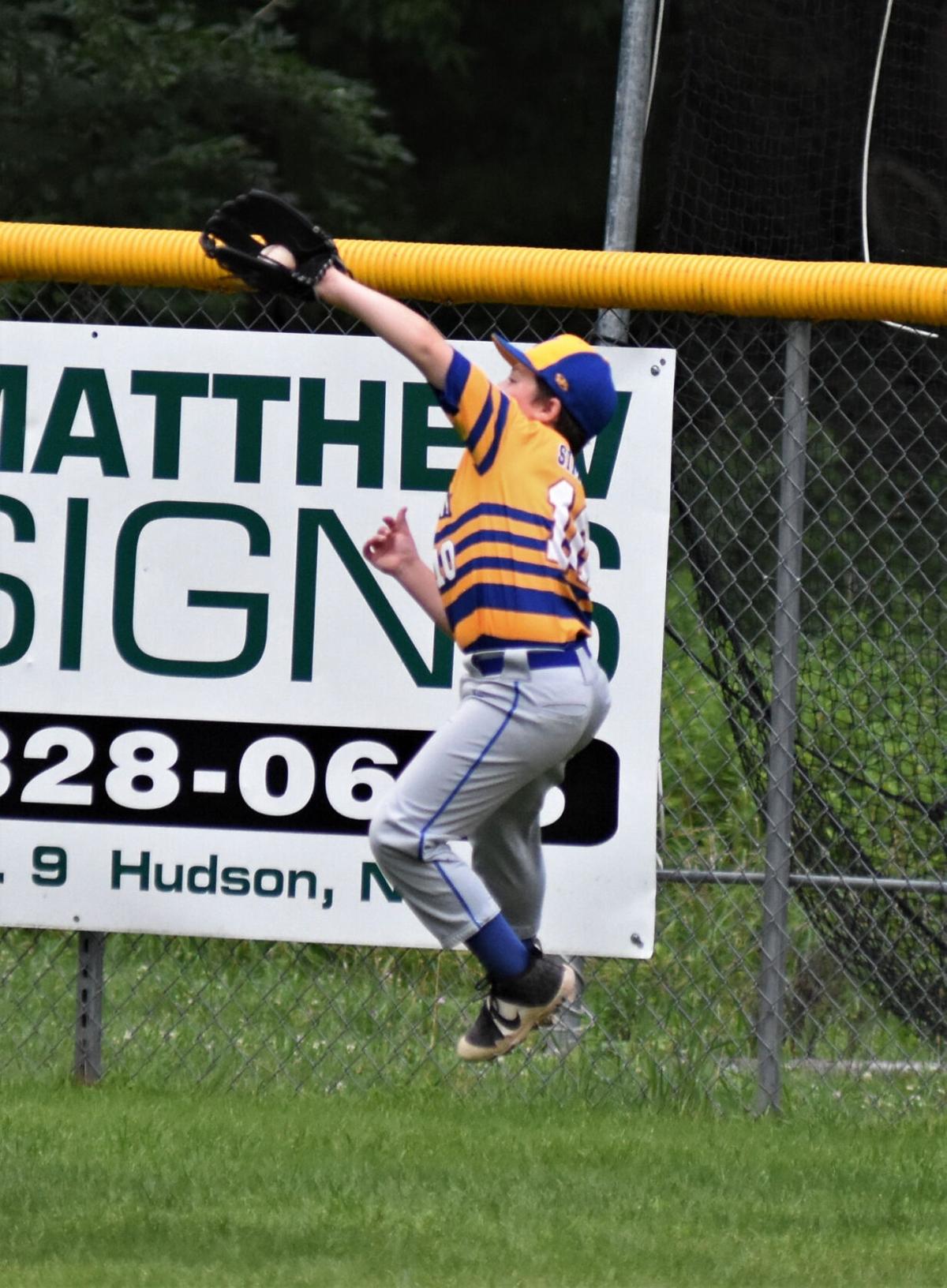 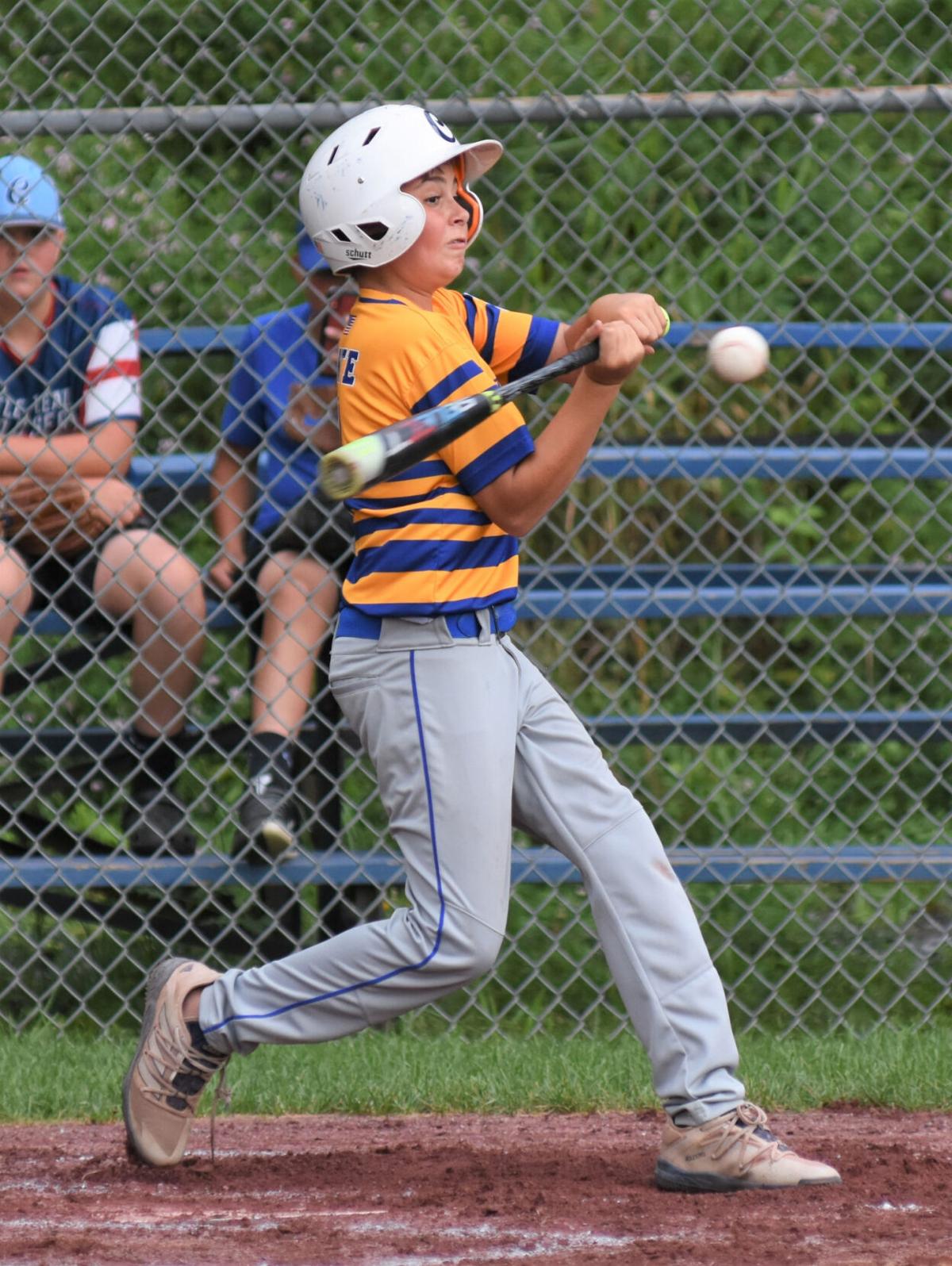 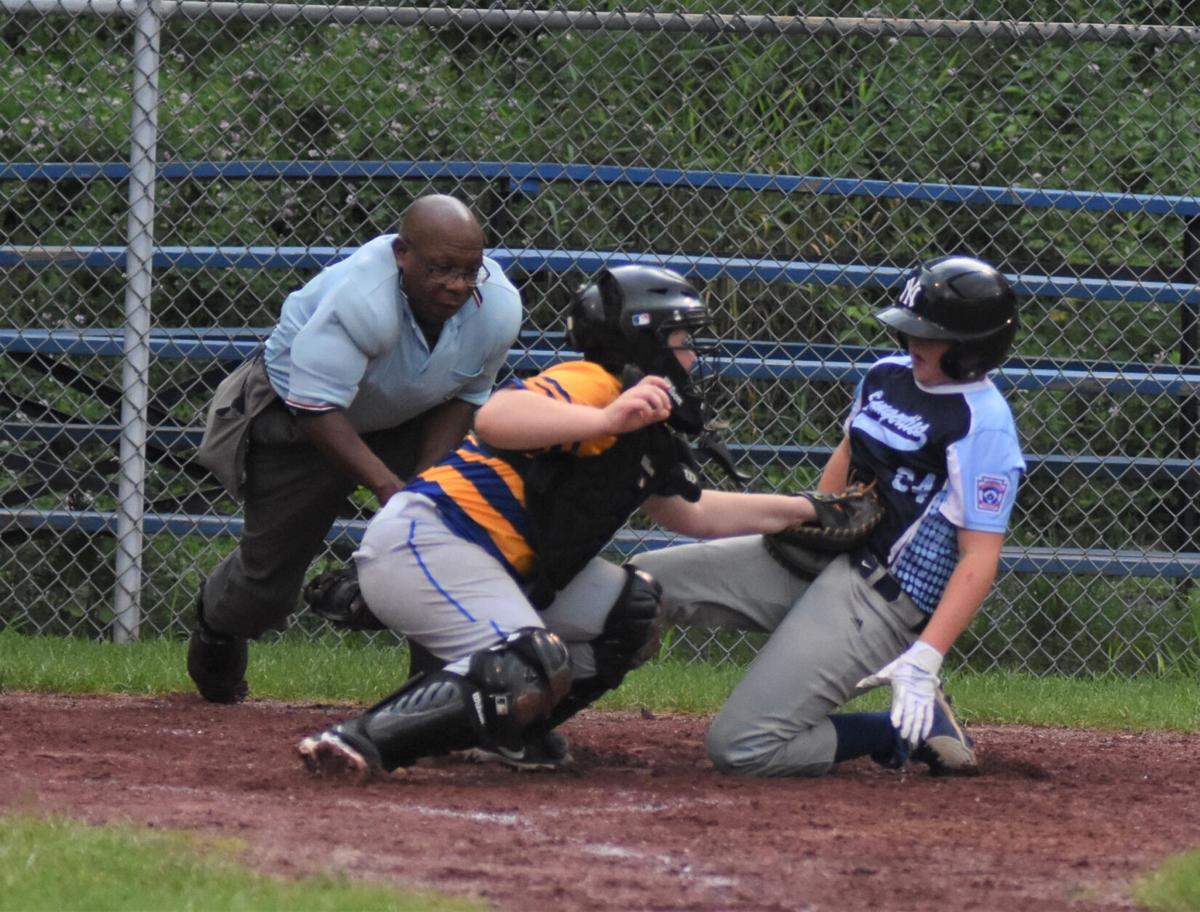 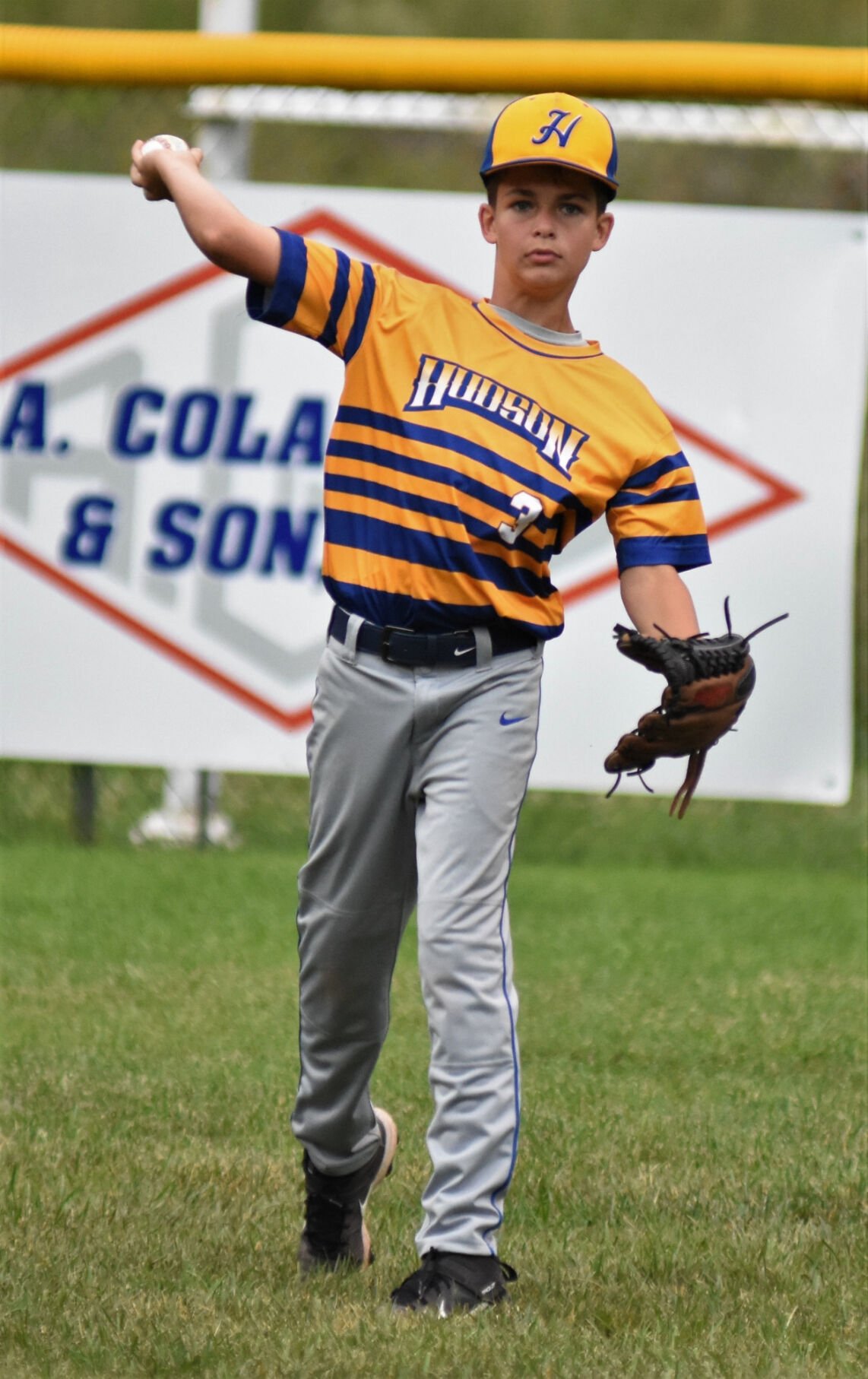 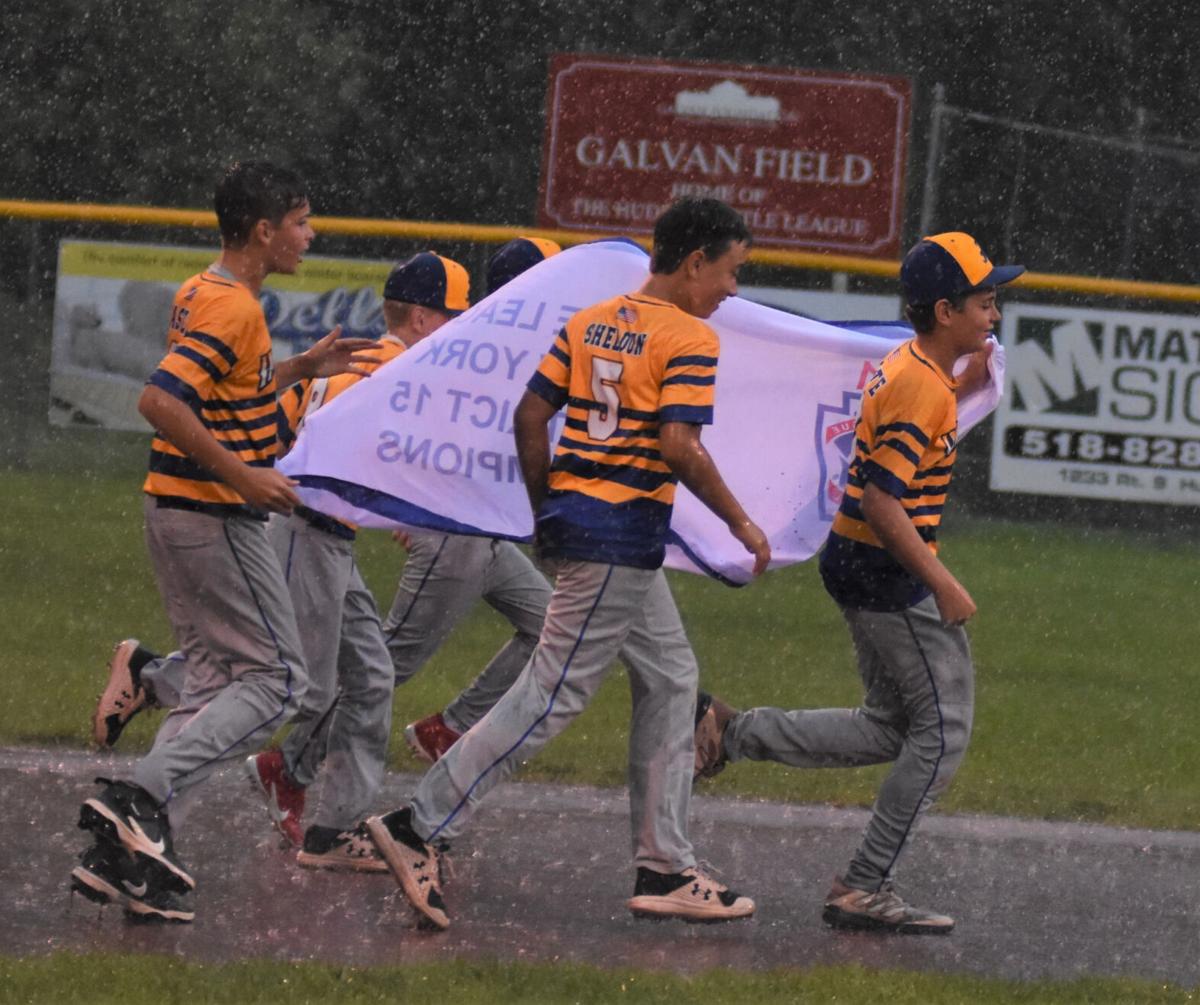 Tim Martin/Columbia-Greene Media Hudson players circle the bases with the District 15 flag after defeating Saugerties 7-6 to win the championship on Friday at Galvan Field. 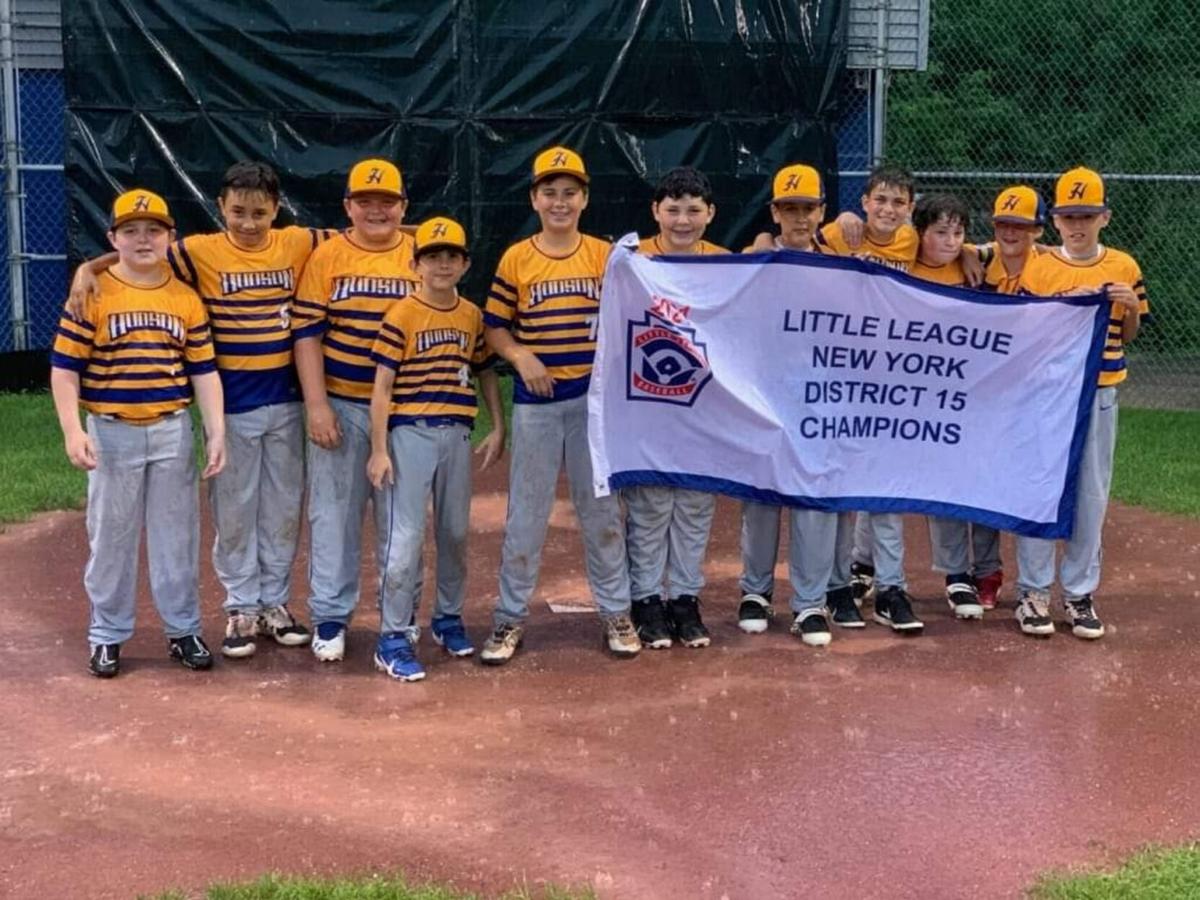 Tim Martin/Columbia-Greene Media Hudson players circle the bases with the District 15 flag after defeating Saugerties 7-6 to win the championship on Friday at Galvan Field.

HUDSON — Behind a gutsy pitching performance by Mason Briscoe, Hudson won the District 15 10-12 year-old championship on Friday with a 7-6 victory over Saugerties at Galvan Field.

The game was stopped in the sixth inning because of heavy rain and lightning.

Hudson advances to regional play and will play at District 14 champion Colonie on Tuesday at 6 p.m. at Cook Park, which is located at 5 Sharon Drive.

“In April we set a goal as a program to win the district,” Hudson head coach andy Simmons said. “Being part of the process and watching the progression has been a privilege. These players are very coachable. Coach (Shawn) Briscoe and Coach (Randy) Conte really had them dialed in the whole tournament and all season.

“Winning the district after losing a season to Covid was a complete team and community effort. Our Board and player families couldn’t be more supportive of our program.”

With No. 1 starter Ryan Conte unavailable after turning in a complete game performance against Northern Columbia earlier in the week, Briscoe got the ball and the 11-year-old came through for his team. The few times he did get in trouble, he settled down and got out of the jam.

“Mason showed up ready to throw hard,” Simmons said. “He pitched his heart out for us and we made plays behind him. He battled hard.”

Briscoe was helped along by some solid defensive efforts turned in by his teammates. Center fielder Joseph Simmons tracked down three long fly balls, including a leaping catch that robbed a Saugerties player of extra bases.

Hudson also turned a huge double play to snuff out a Saugerties rally in the bottom of the fourth inning. With two on and one out, Briscoe retired Colin Kotsol on a come-backer to the mound. Hudson first baseman Trent Keller spotted Saugerties baserunner Liam Ienuso heading for home and alertly fired a strike to catcher Darren Weaver Jr., who tagged Ienuso out at the plate, completing the double play to end the inning.

“Our defense has been solid the entire tournament and Friday night was no different,” Simmons said. “Weaver had another solid outing behind the plate especially on the tag at home and Joseph was clutch for us in center.”

Saugerties, which needed to beat Hudson twice in order to win the District title, took a 1-0 lead in the first inning when T.J. Monroe walked, went to third on an error and scored on Michael Gramoglia’s infield single.

Hudson responded with four runs in the top of the second off of Saugerties starter Gramoglia. Joseph Simmons reached on a fielder’s choice and Weaver and Xavier Castle walked to load the bases.

Saugerties switched pitchers at that point and Briscoe greeted Corey Pesce with an RBI single. After a strikeout, Ryan Conte ripped a two-run single and Keller singled in another run to make it 4-1.

Hudson added two more runs off of Saugerties’ third pitcher, T.J. Monroe, in the third. Gavin Boushie and Simmons singled, then with two outs, Briscoe was hit by a pitch, loading the bases. Evan Conte’s grounder was fielded cleanly in the infield, but the throw to first was in the dirt, allowing two runs to score to boost Hudson’s lead to 6-1.

From that point on, it was a race against Mother Nature to complete the game as clouds started to roll in.

Saugerties began to chip away in the bottom of the third as Monroe doubled and Reid Myers hammered a two-run homer to left-center to slice Hudson’s lead in half, 6-3.

Hudson got a run back in the fourth when, with two outs, Amarion Perry, Simmons and Weaver singled and castle was hit by a pitch, forcing in what proved to be the game-winning run.

Saugerties continued to battle back in the fifth. Monore drew a lead off walk and came around to score when Gramoglia’s base hit was misplayed in the the outfield. Myers followed with an RBI single and eventually scored on an infield error to make it a 7-6 game.

At the start of the sixth inning, the umpires pulled the teams off of the field because of a lightning strike and a short time later, the skies opened up and the heavy rains made the field unplayable. After a 30-minute wait, the umpires and District officials decided to call the game at that point, and since five full innings were completed, the game was official and Hudson was declared the winner.

Hudson assistant coach Shawn Briscoe was excited for the team.

“Super proud of this team and the way they approach the game,” Briscoe said. “They have a determination and a will to win and a passion for the game. This is such a fun group of kids to coach and they make our jobs easy!

“I don’t know when the last time we won a district championship at this level but I know it has been a while and this has been our goal since the beginning of the little league season and they have put the work in to allow for this opportunity!”

Simmons led Hudson with two singles. Ryan Conte contributed a single and two RBI, Keller and Mason Briscoe both singled and drove in a run, Boushie, Perry and Weaver singled and Castle had an RBI.

“Our whole lineup is one tough out after another,” Andy Simmons said. “The players all show great plate discipline and maturity in the box.”

Myers’ home run and single led Saugerties, which won the District 15 title in 2019. Monroe doubled, Gramoglia had two singles and an RBI and Tommy Murphy, Ienuso and Max Morris all singled.

“I tip my cap to Saugerties,” Andy Simmons said. “They are always strong and always well-coached. This year was no different. They made us earn everything. Our players knew they had to bring it.”

With the District 15 title in hand, Hudosn now turns its attention to regional play where it will face Colonie, which won the District 14 championship on Sunday.

“We are on a great run and this team has a great mentality, the coaches could not be more proud of this accomplishment,” Shawn Briscoe said. “We will now regroup and get focused on Colonie. Time to continue to make Hudson proud!”