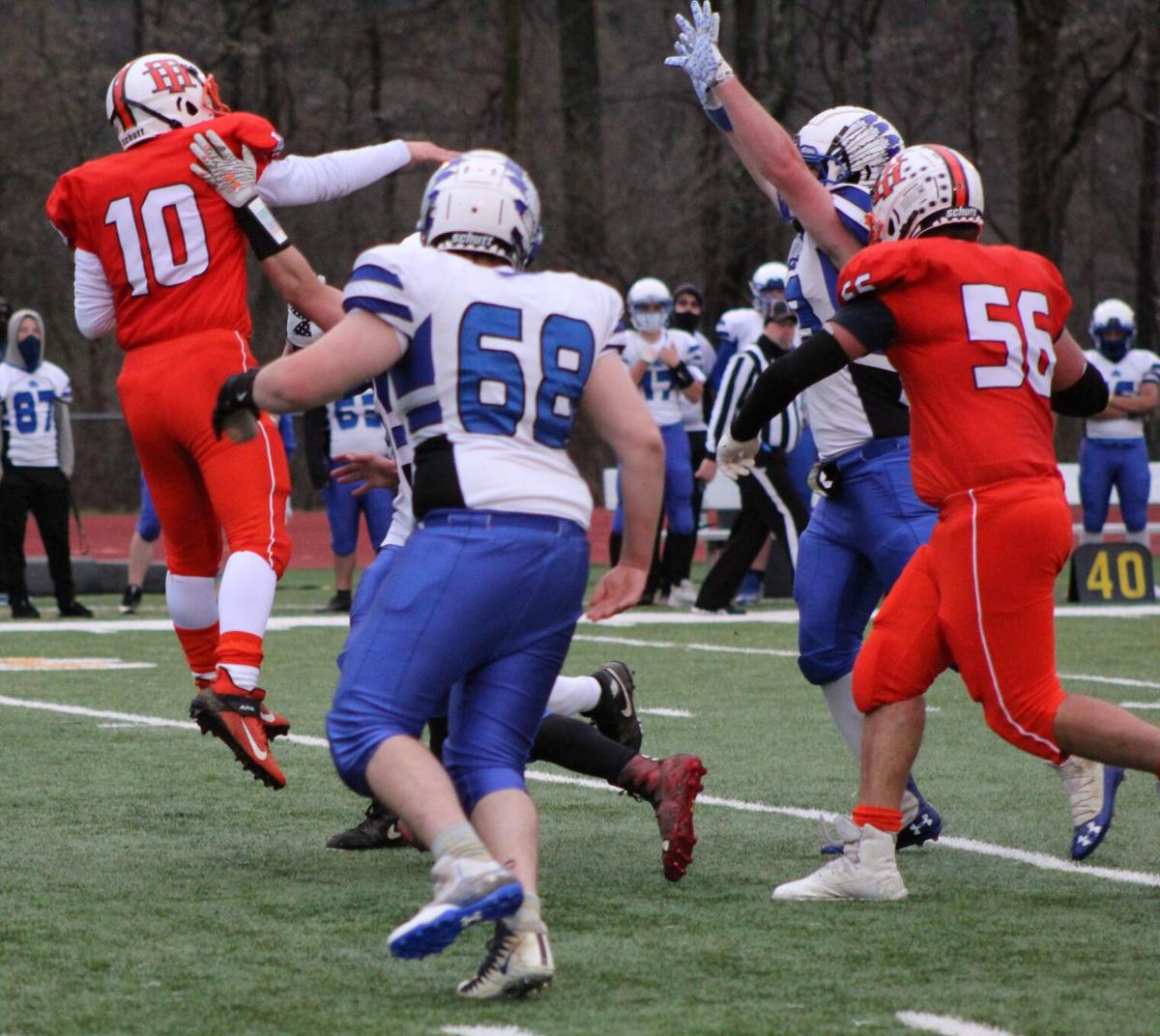 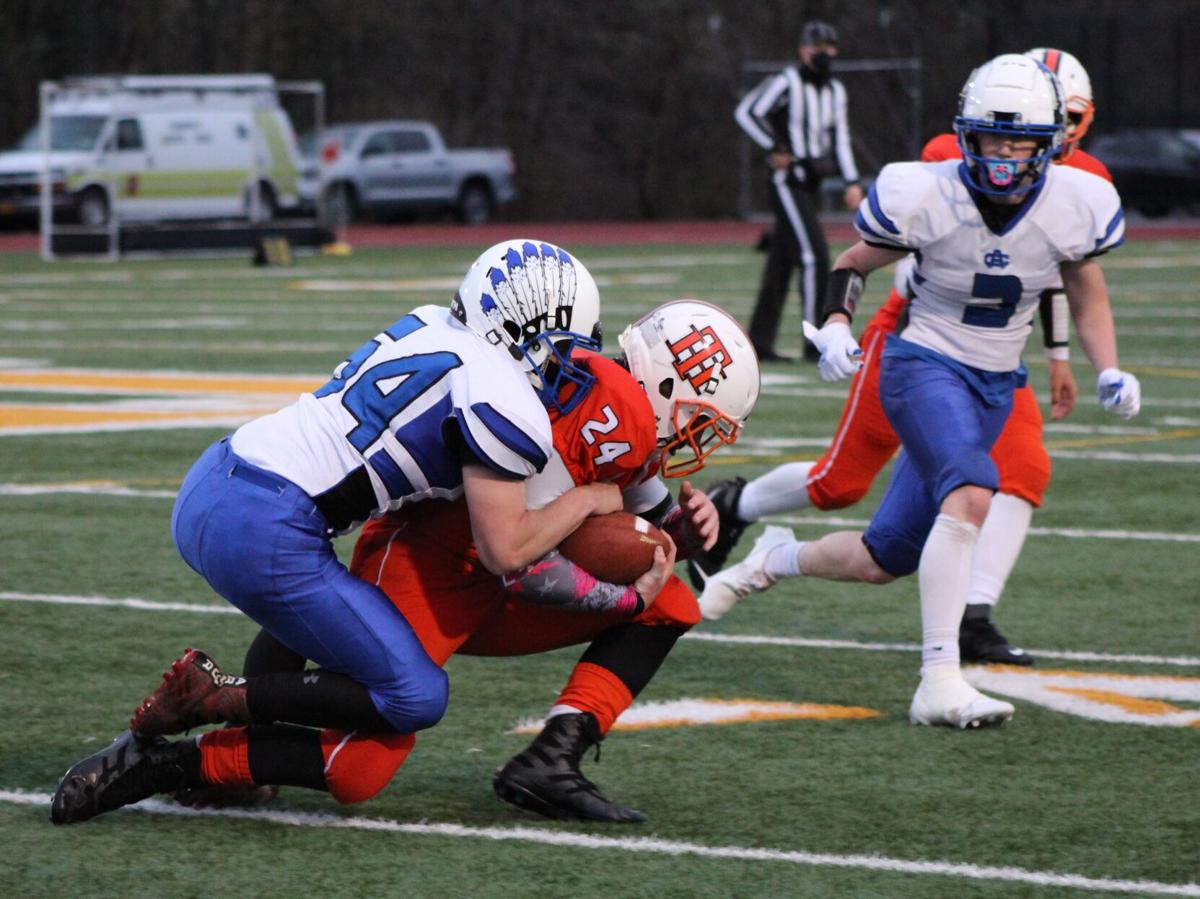 CRARYVILLE — The Coxsackie-Athens Indians won on the road at Taconic Hills against the Titans Friday night, 45-22, in a Class C South Division game.

Indians’ running back Berno Carey led all runners with 120 yards and a touchdown on just eight rushing attempts. Quarterback Brandon Wolbert had eight carries himself, totalling 84 yards on the ground and getting into the end zone twice for Coxsackie-Athens.

Wolbert only completed four passes on the night, but threw a touchdown and racked up 105 yards through the air with one interception. The Indians’ defense had a whopping eight sacks in the game, three and a half of them coming from Thomas Notabartolo.

Taconic Hills’ quarterback Tyler Peck was forced to throw the ball all night, completing 23 of 32 passes for 214 yards with one touchdown and one interception.

The Titans looked to get off to a hot start, as Tyler Peck connected with Chris Cortwright for a 23 yard pass on the first play from scrimmage. However, the Titans quickly faced a fourth down after a few plays netted them no yards, and Peck fumbled to give the Indians great field position at their opponents’ 40 yard line.

Taconic Hills’ defense stepped up on the ensuing possession, and they quickly got the ball back. Later in the first quarter, Titans’ Aaron Bonci intercepted a pass from Indians’ quarterback Brandon Wolbert, with less than five minutes to go in the period. Another chunk play on a pass from Peck to Cortwright set Taconic Hills up for a score, as Bob Burns took a handoff up the middle and into the end zone for a Titans touchdown. Peck then completed another pass to Cortwright for the two point conversion.

Taconic Hills took their 8-0 lead into the second quarter but a few drives in, the turning point came for Coxsackie-Athens. On one of the Titans’ possessions, Tyler Peck was hit in the backfield on three consecutive plays for two sacks and one incompletion and the Indians’ stops on defense fired up the rest of their team with a little over six minutes on the clock before halftime.

Coming out of a timeout, the Indians faced a fourth and ten in the red zone, and Brandon Wolbert completed a pass to Dillon Hynes for the touchdown. After the extra point, Coxsackie-Athens still trailed 8-7 with 5:31 left in the first half.

The Indians’ defense made another key stop and the offense capitalized once they got the ball back. Wolbert took the ball up the middle on the quarterback option run, and took the ball across the goal line from over 20 yards out. After another successful extra point, the Indians led 14-8 at the 3:04 mark. Taconic Hills drove the ball down to their opponents’ seven yard line, but could not score before the break and still trailed 14-8.

The Indians started the third quarter with the ball, and moved down the field very quickly. Starting the drive at their own 27, Coxsackie-Athens gave Berno Carey the inside handoff on three consecutive plays to begin the second half, and he brought the ball to the Titans’ 31 yard line as he slipped past defenders.

The Indians were very deliberate on this drive and showed excellent clock management, as Wolbert eventually scampered in for the touchdown with 7:22 left in the third quarter.

After a Taconic Hills punt and penalty, Coxsackie-Athens had the ball at the opponents’ 11, and kicked a field goal after failing to get a first down, but they widened their lead to 24-8. A few minutes later, the Indians still had their foot on the gas and they scored yet another touchdown, this time by Berno Carey, and they led 31-8.

Taconic Hills began the fourth quarter with a first down at their own 30, and Tyler Peck scrambled for a 20+ yard gain two plays later for a fresh set of downs, and looked to inject life into the Titans’ offense.

On a fourth and 14 play, Bob Burns managed to get just enough to move the chains, and the Titans scored on the following play thanks to a touchdown catch by Charlie Beck. The Titans could not convert the two point play, but looked to build momentum after the touchdown, with just over eight minutes to play.

Their hopes were dashed on the following kickoff however, when Thomas Notabartolo took the ball all the way back for the return touchdown which made it a 38-14 lead for the Indians.

The last gasp for Taconic Hills came a few minutes later, when Cortwright took the handoff 71 yards and into the endzone for a touchdown to bring the Titans within two possessions, trailing 38-22 with 4:58 remaining.

Coxsackie-Athens answered with the dagger on their ensuing possession though, and scored the final touchdown of the night on a perfectly executed play-action pass by Brandon Wolbert, who found Patrick McManus down the middle of the field and into the endzone.

The Titans failed to score as the clock wore on and when it hit zero, the Indians came away with the victory 45-22.