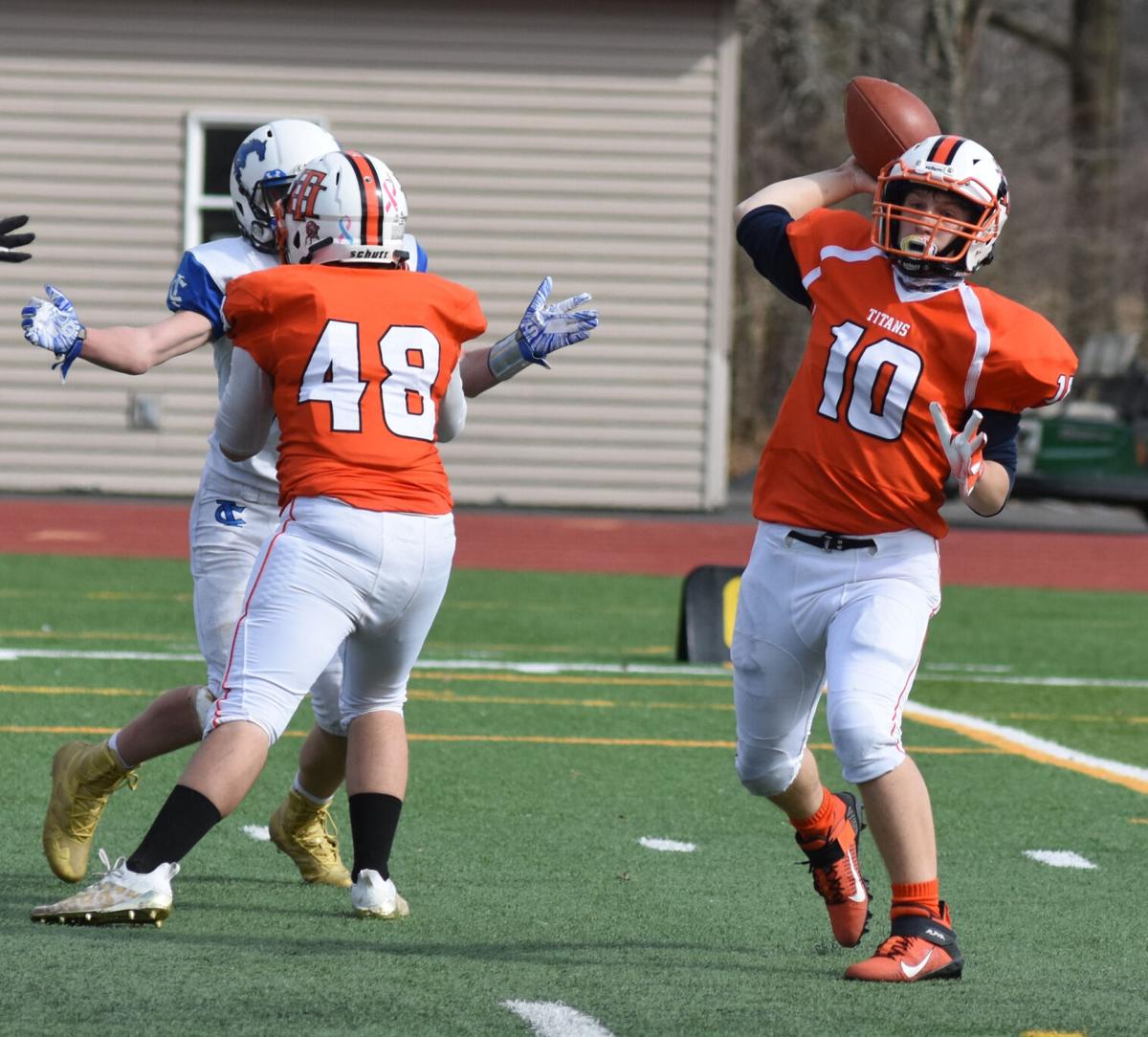 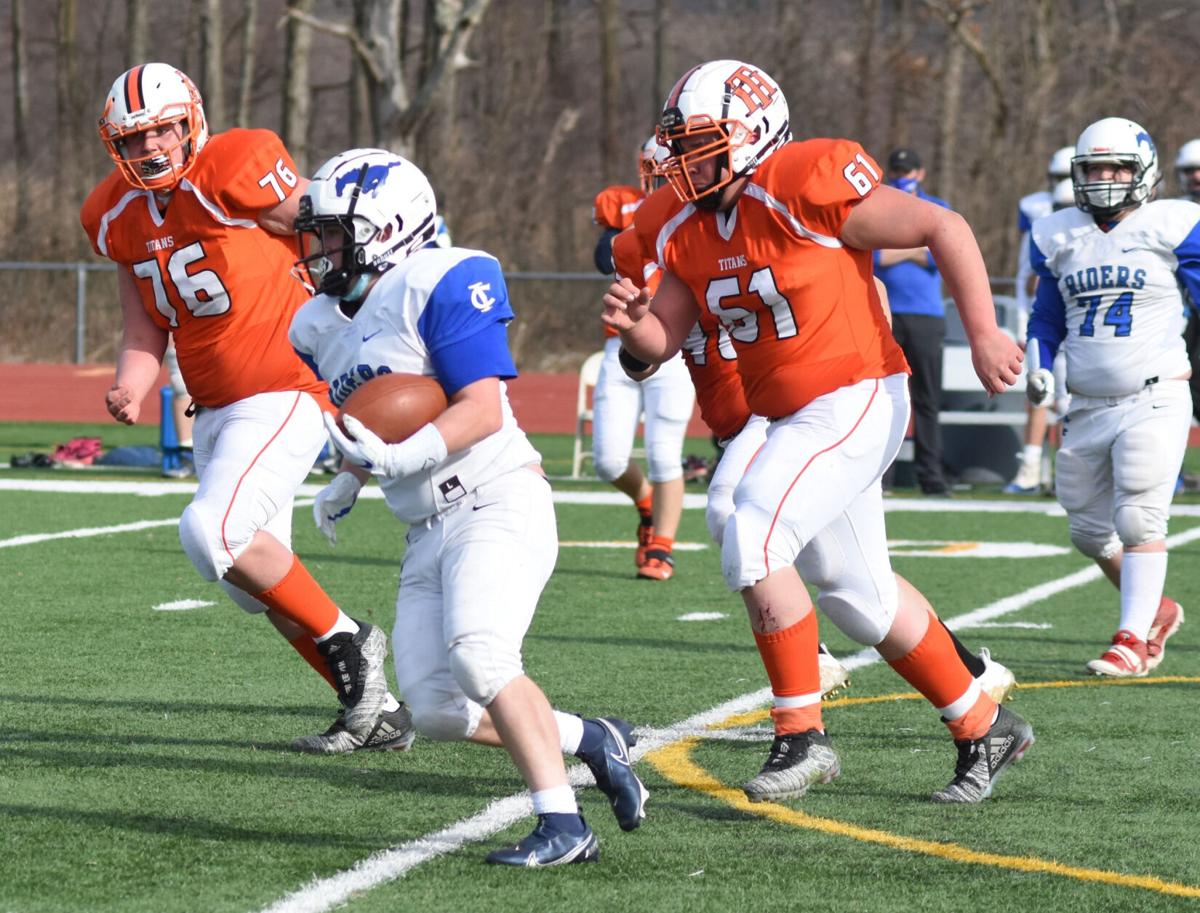 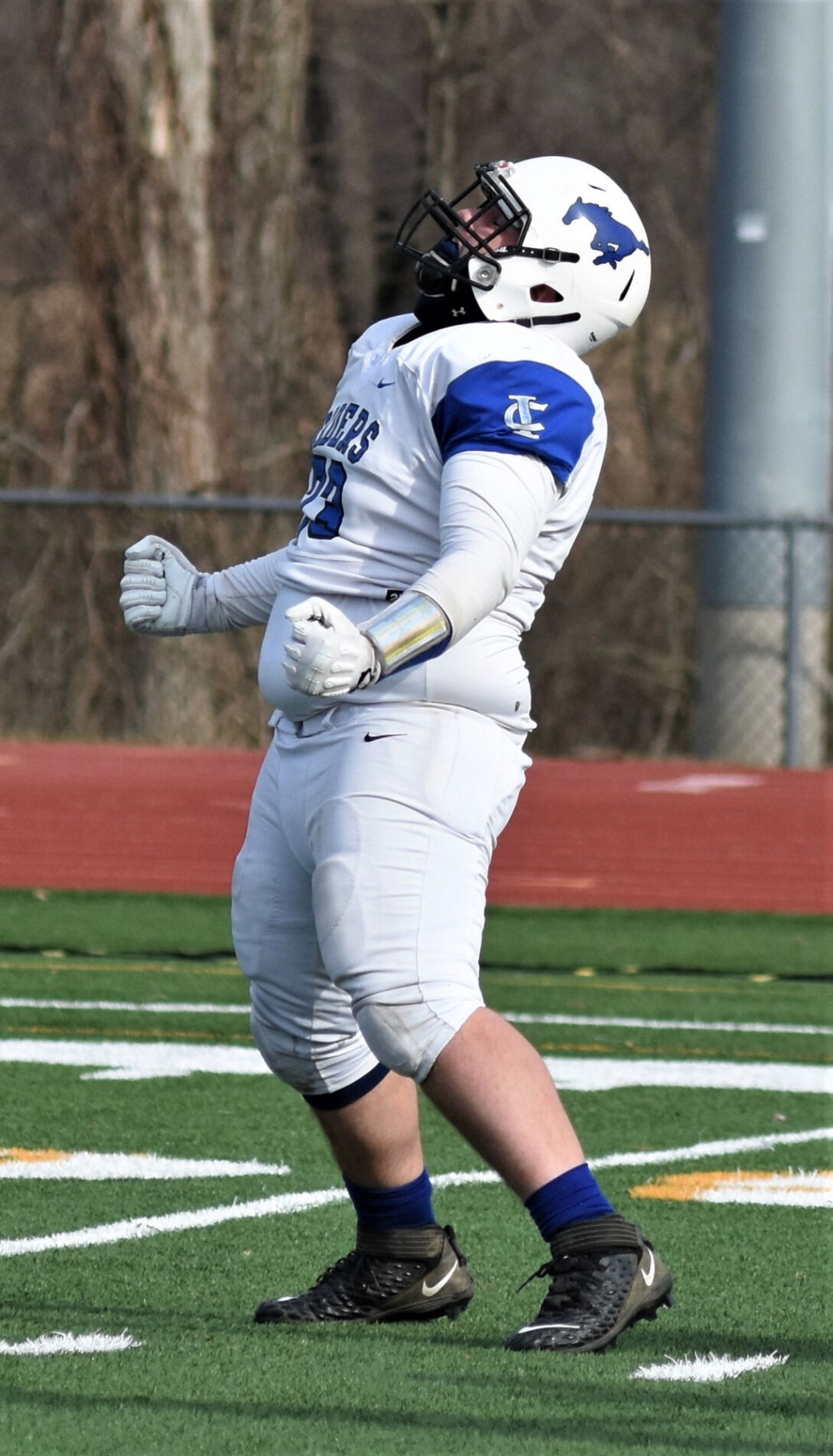 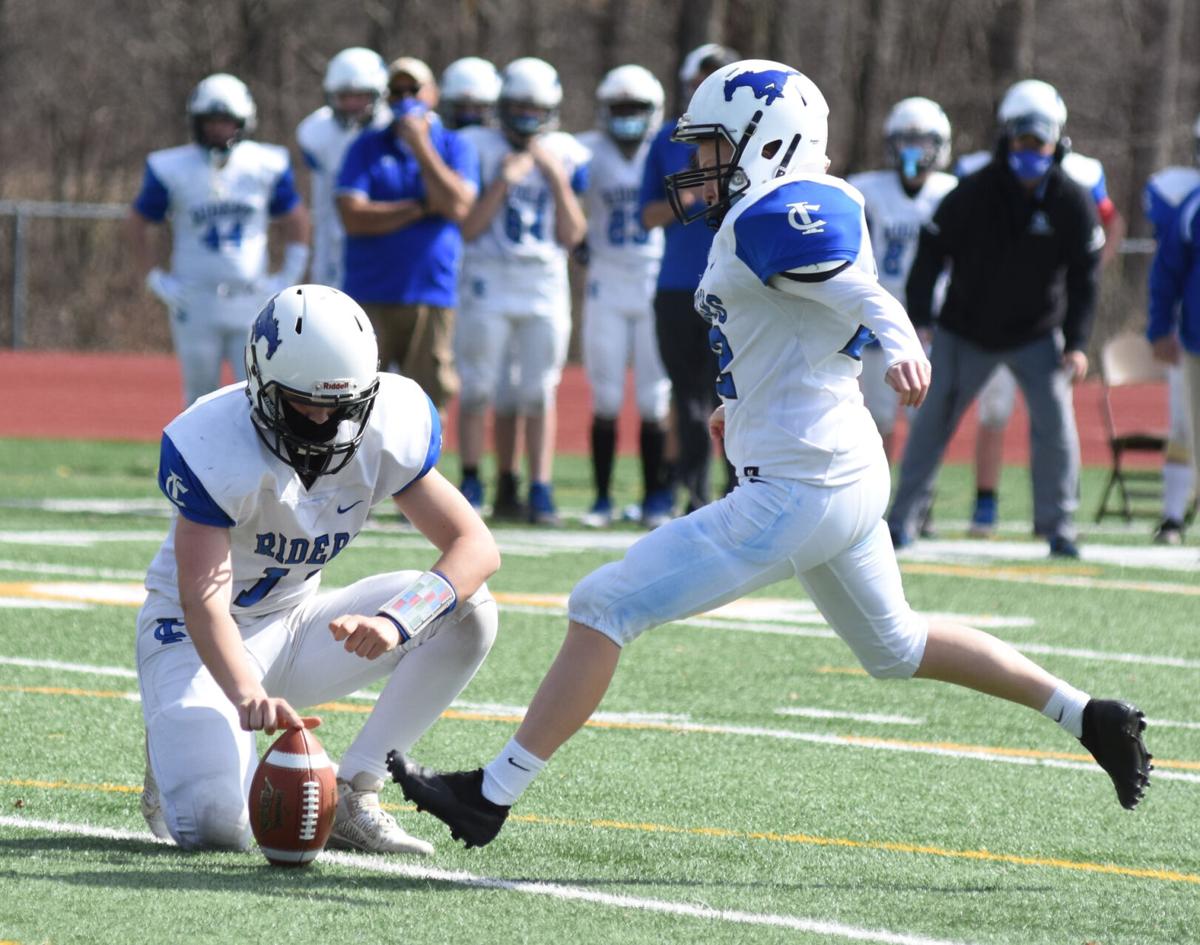 Tim Martin/Columbia-Greene MediaKicker Abby Dolge made history on Saturday by becoming the first female athlete to ever participate in a game for the Ichabod Crane football team. Dolge kicked two extra points to help the Riders defeat Taconic Hills, 26-22. 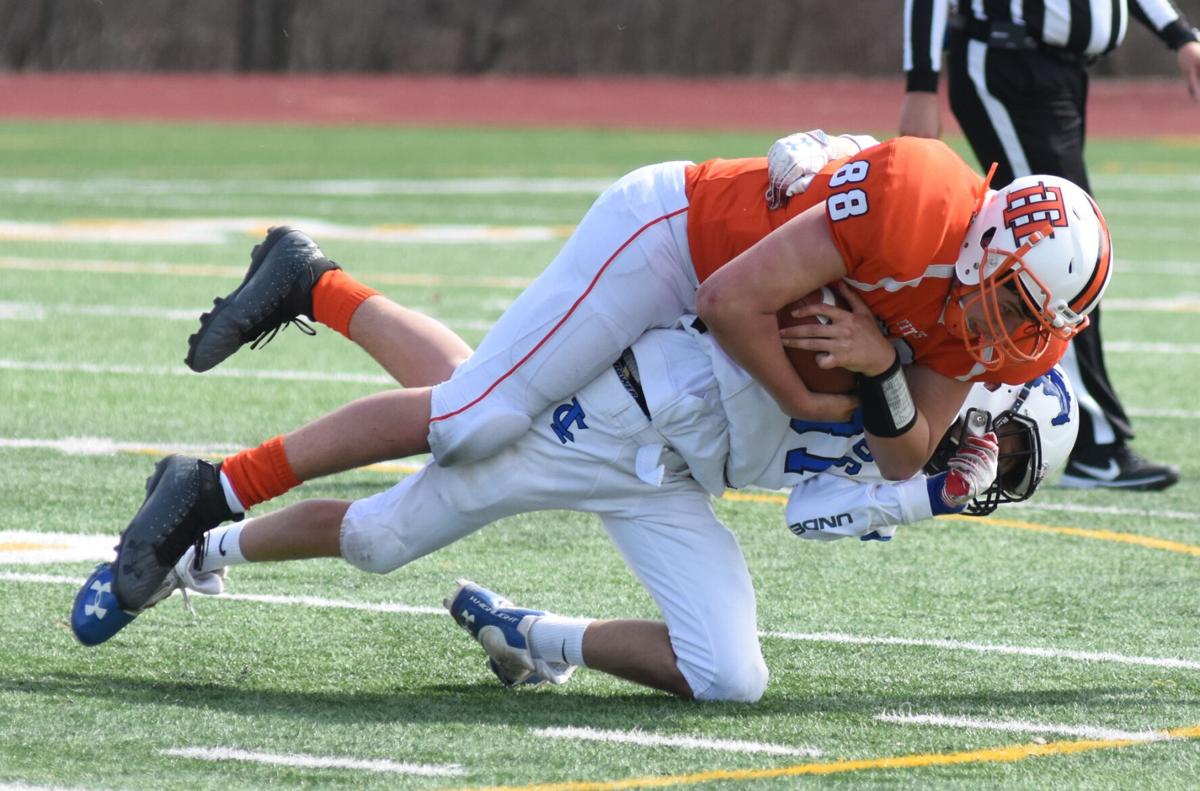 Tim Martin/Columbia-Greene MediaKicker Abby Dolge made history on Saturday by becoming the first female athlete to ever participate in a game for the Ichabod Crane football team. Dolge kicked two extra points to help the Riders defeat Taconic Hills, 26-22.

CRARYVILLE — Conner Ackerly scored on a six-yard run with 2:03 remaining in the game to give Ichabod Crane a come-from-behind 26-22 victory over Taconic Hills in Saturday’s Section II Class C football game at Taconic Hills High School.

After a scoreless first quarter, Ichabod Crane got on the scoreboard when quarterback Joe Penzabene capped off a drive with a one-yard run. Kicker Abigail Dolge, who made school history by becoming the first female athlete to ever participate in a varsity football game, booted the first of her two extra points to put the Riders up, 7-0.

Taconic Hills answered late in the half when Chris Cortwright scored on a two-yard run. The two-point conversion attempt failed, leaving Ichabod Crane in front, 7-6 at halftime.

Freshman Tyler Peck replaced injured starter Bob Burns at quarterback in the second half and the Titans’ offense responded with two touchdowns in the third quarter, the first on a 41-yard pass from Peck to TJ Sindler. Peck ran in the two-point conversion to give the Titans a 14-7 lead with 9:24 to play in the third quarter.

The Titans were threatening to add to their lead when Connor Booth picked off a Peck pass and returned it 95 yards for a score. Dolge added the PAT kick, evening the score at 14-14 with 4:14 to go in the stanza.

Peck came right back and led the Titans down the field, with Sindler’s 11-yard run capping off an impressive drive. Peck passed to Sindler for the two-point conversion to put the Titans back on top, 22-14, with a quarter to play.

The Riders fought back, driving down the field early in the fourth quarter. With 926 left in the game, Penzabene hooked up with Erik Holmberg for an 11-yard scoring pass. The two-point conversion try failed, leaving the Riders down, 22-20.

Taconic Hills continued to move the ball, but a Jason Craig picked off a pass inside the Ichabod Crane 20-yard line, setting up the Riders’ game-winning drive.

Mixing the run with the pass, Ichabod Crane marched down the field, with Ackerly’s six-yard burst up the middle capping off the drive and putting the Riders in front for good.

The Titans had one last chance, but on a fourth and long play, the Riders’ Ben Vecellio sacked Peck to lock up the victory.

“It was a hard fought game back and forth,” Ichabod Crane coach Tom Call said. “Could have gone either way. Credit to our team for refusing to give up and finding a way. It’s a big win for the season, but an important win for the program as we have a young squad gaining confidence.

“Big plays were made in all three phases of the game including special teams. The addition of our kicker Abby Dolge has strengthened that unit. I’m very proud of her performance, adding two extra points in critical situations. We’re hoping to keep up the momentum next week against a much improved C-A team.”

Penzabene completed 8 of 17 passes for 107 yards and a TD. Dylan McCrudden was his favorite target, hauling in four receptions for 67 yards.

Peck finished with 10 completions in 19 attempts for 190 yards with a TD and three interceptions. Burns completed 5 of 12 passes for 48 yards and an interception.

Ichabod Crane plays at Coxsackie-Athens on Friday at 6 p.m., while Taconic Hills goes to Hoosick Falls/Tamarac on Friday at 7 p.m.