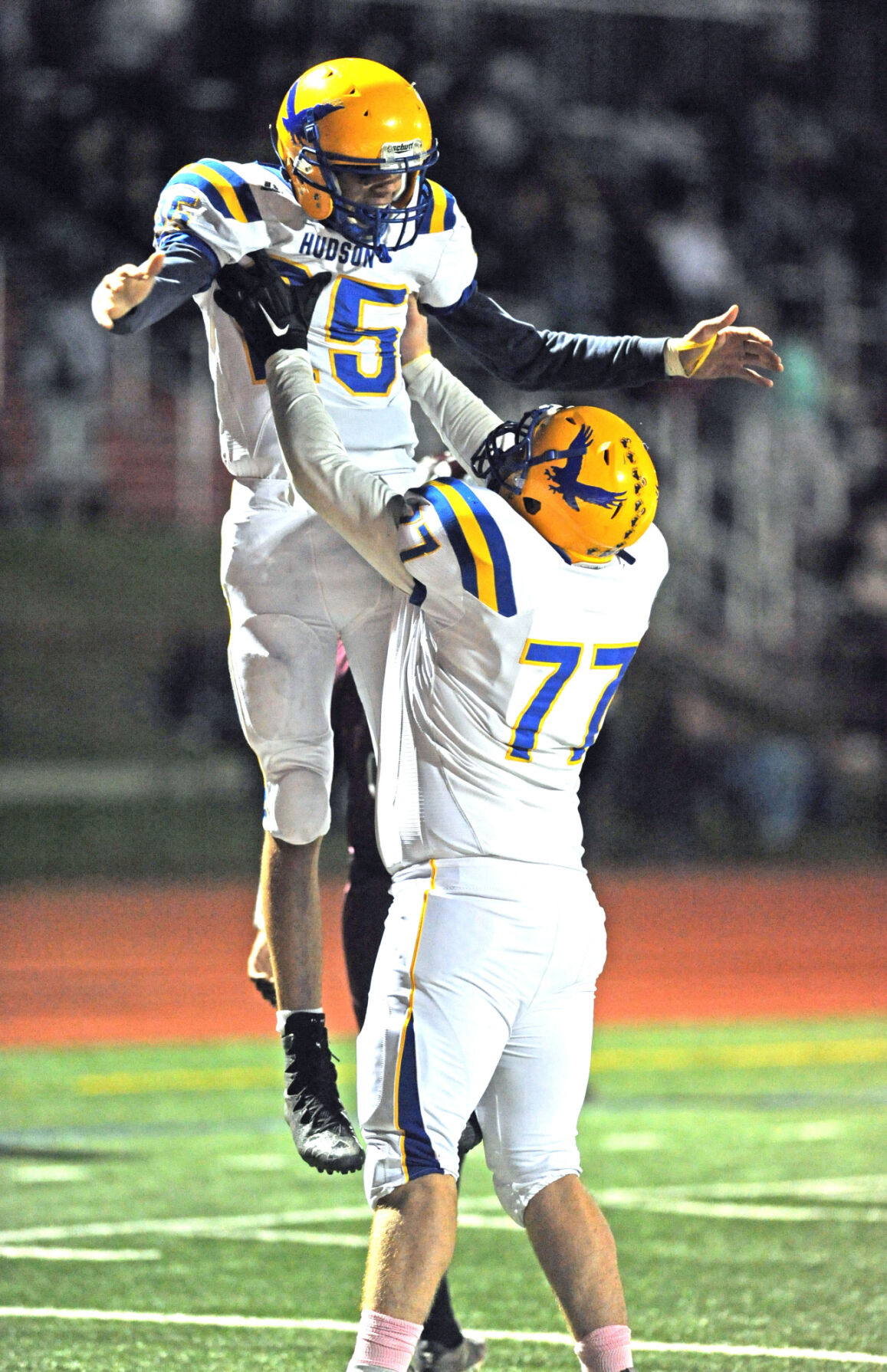 Chip Moon photo Hudson Bluehawks Jake Hromada (77) celebrates with teammate Kristyain Clarke (25) after Clarke reeled in a touchdown pass in the first quarter against Watervliet on Friday at Watervliet. 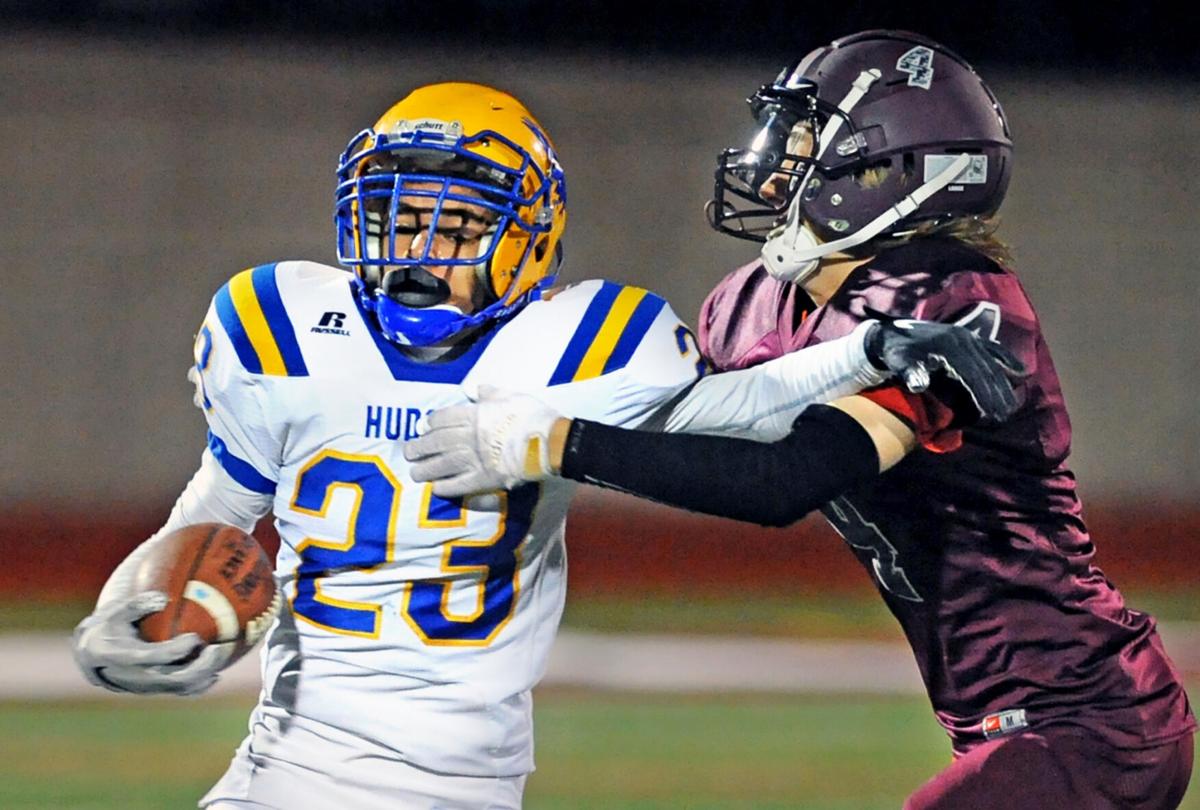 Chip Moon photo Hudson Bluehawks running back Jeremiah Wilburn (23) fights off a tackle attempt by Watervliet Cannoneers Colton Hall (4) during the first half on Friday at Watervliet. 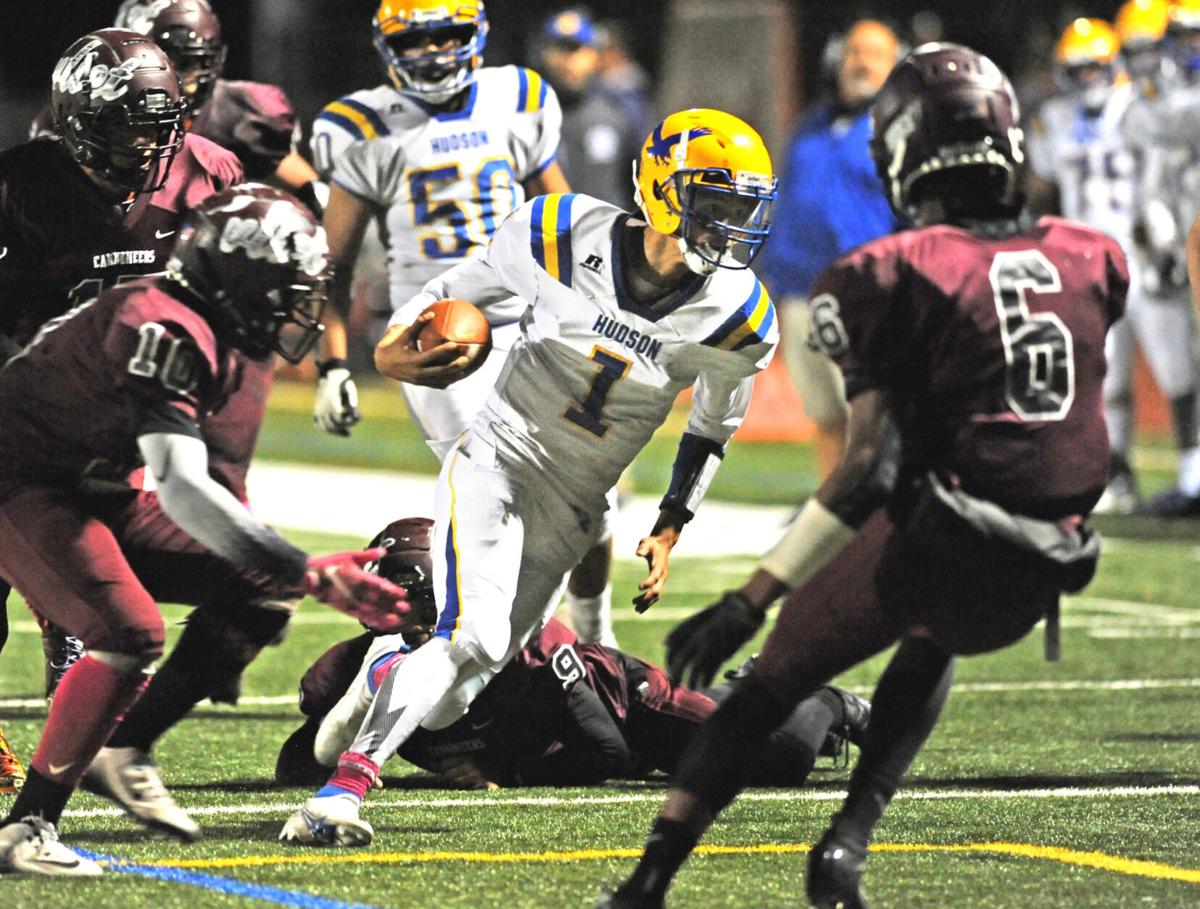 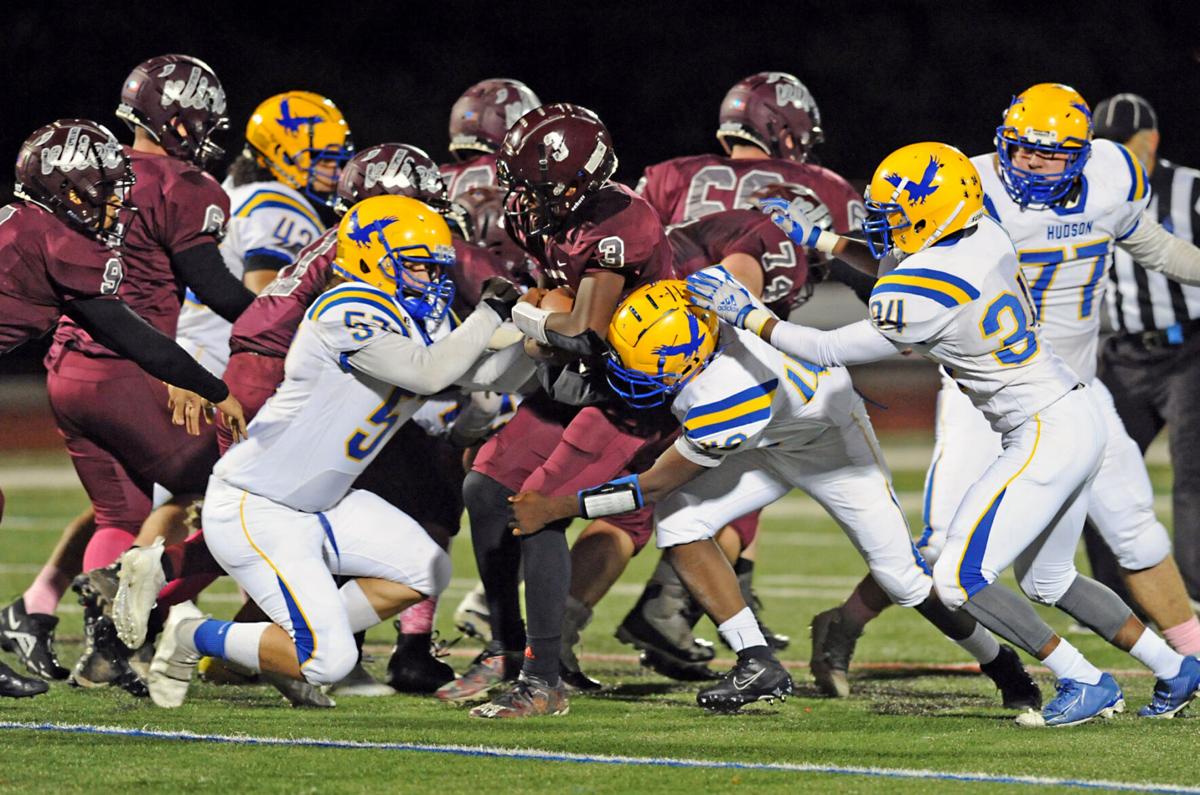 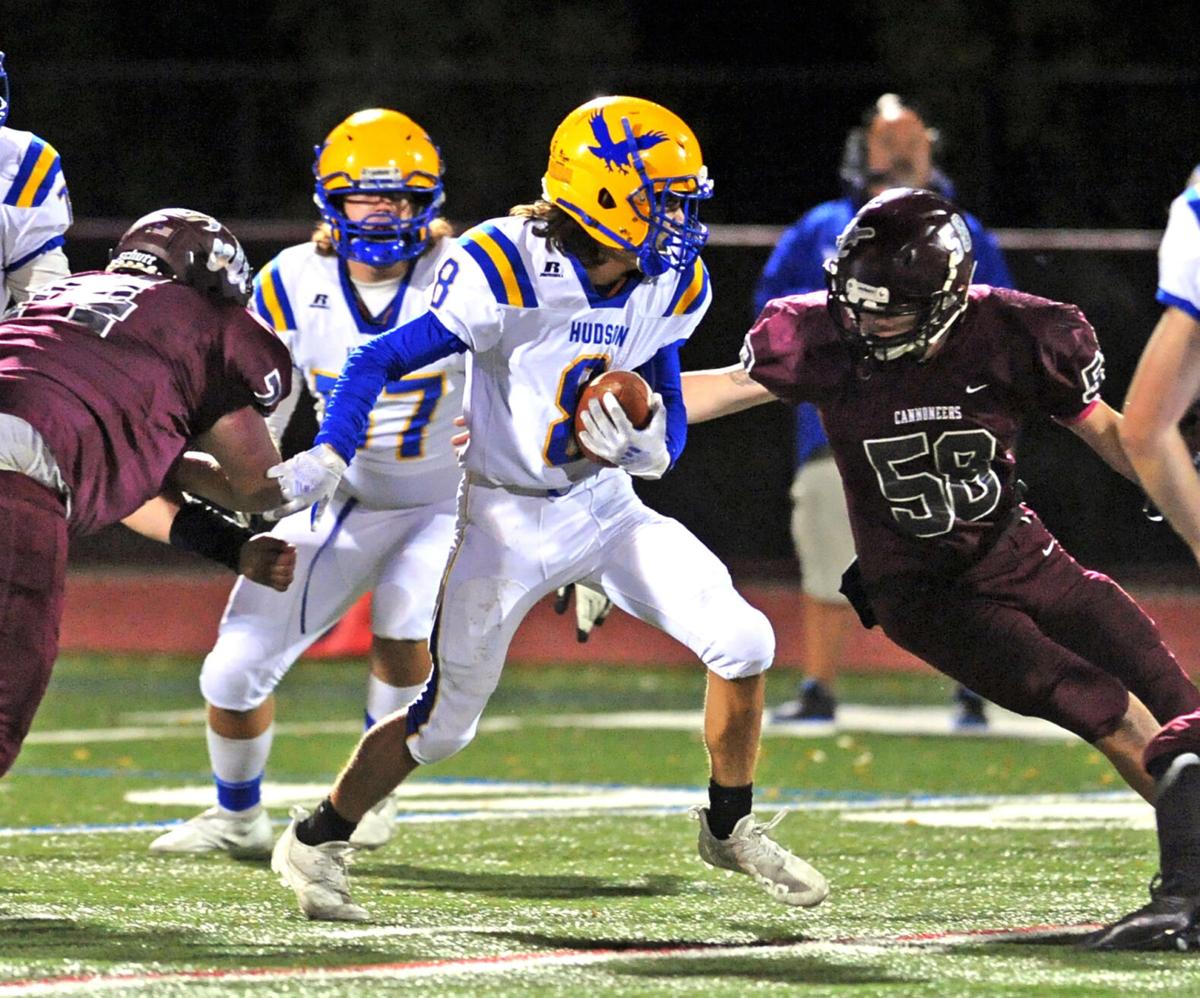 Chip Moon photo Hudson Bluehawks Jake Hromada (77) celebrates with teammate Kristyain Clarke (25) after Clarke reeled in a touchdown pass in the first quarter against Watervliet on Friday at Watervliet.

Chip Moon photo Hudson Bluehawks running back Jeremiah Wilburn (23) fights off a tackle attempt by Watervliet Cannoneers Colton Hall (4) during the first half on Friday at Watervliet.

WATERVLIET — Watervliet wrapped up the Class C South Division title and the No. 1 seed in the Section II playoffs with a 42-6 victory over Hudson on Friday night at Watervliet High School.

The loss drops Hudson to third in the South with a 5-2 record. The Bluehawks will travel to Hoosick Falls/Tamarac, the No. 2 seed from the North Division, on Friday at 7 p.m. in the opening round of the Class C playoffs.

In the other Class C playoff games, Taconic Hills will go to Schuylerville on Thursday at 6 p.m., Watervliet entertains Fonda on Friday at 7 p.m. and Voorheesville hosts Cobleskill-Richmondville on Saturday at 1 p.m.

Hudson got off to a good start in Friday’s game, scoring on its opening possession on a 13-yard pass from Isaiah Maines to Kristyain Clarke.

Watervliet went on to score 42 unanswered points the rest of the way to sew up the South Division title with a 7-0 record.

Jamel Ward scored on a three-yard run, then completed a two-point conversion pass to Adonis Cyrus to put the Cannoneers on top, 8-6, with 3:43 to play in the opening quarter.

Watervliet exploded for 22 more points in the second quarter to go up, 30-6 at halftime. Ward figured in all three Cannoneer touchdowns in the stanza, tossing touchdown passes of 27 yards to Amel Conway and three yards to Diogenes George and running for a three-yard score.

After a scoreless third quarter, Watervliet added two more touchdowns in the final stanza on a 63-yard pass from Ward to Conway and a one-yard run by Kendryek Flynn.

CRARYVILLE — Voorheesville clinched second place in the Class C South Division with a 27-6 victory over Taconic Hills on Friday.

Despite the loss, the Titans have qualified for the Class C playoffs and will go to the No. 1 seed from the North Division, Schuylerville, on Thursday at 6 p.m.

The Taconic Hills defense played well on Friday, limiting the explosive Voorheesville offense well below its 36-points per game average, but the offense could produce just one score — an 80-yard pass from Tyler Peck to Landon Halsted.

CAMBRIDGE — Chatham gave perennial Class D power Cambridge all it could handle before dropping a 37-35 decision on Saturday at Cambridge High School.

The Panthers trailed 25-14 at halftime, but pulled to within 37-28 after three quarters, then got to within two and had the ball inside the Indians’ 10-yard line as the clock ran out.

Matt Radley rushed for 169 yards and three touchdowns on 18 carries for Chatham, scoring on runs of 2, 2 and 67 yards.

Quarterback Tyler Kneller added 95 yards rushing on 13 carries and completed 15 of 24 passes for 211 yards, including a 40-yard TD pass to Mike Pierro.

Chatham will host Warrensburg on Friday night at 7 p.m.