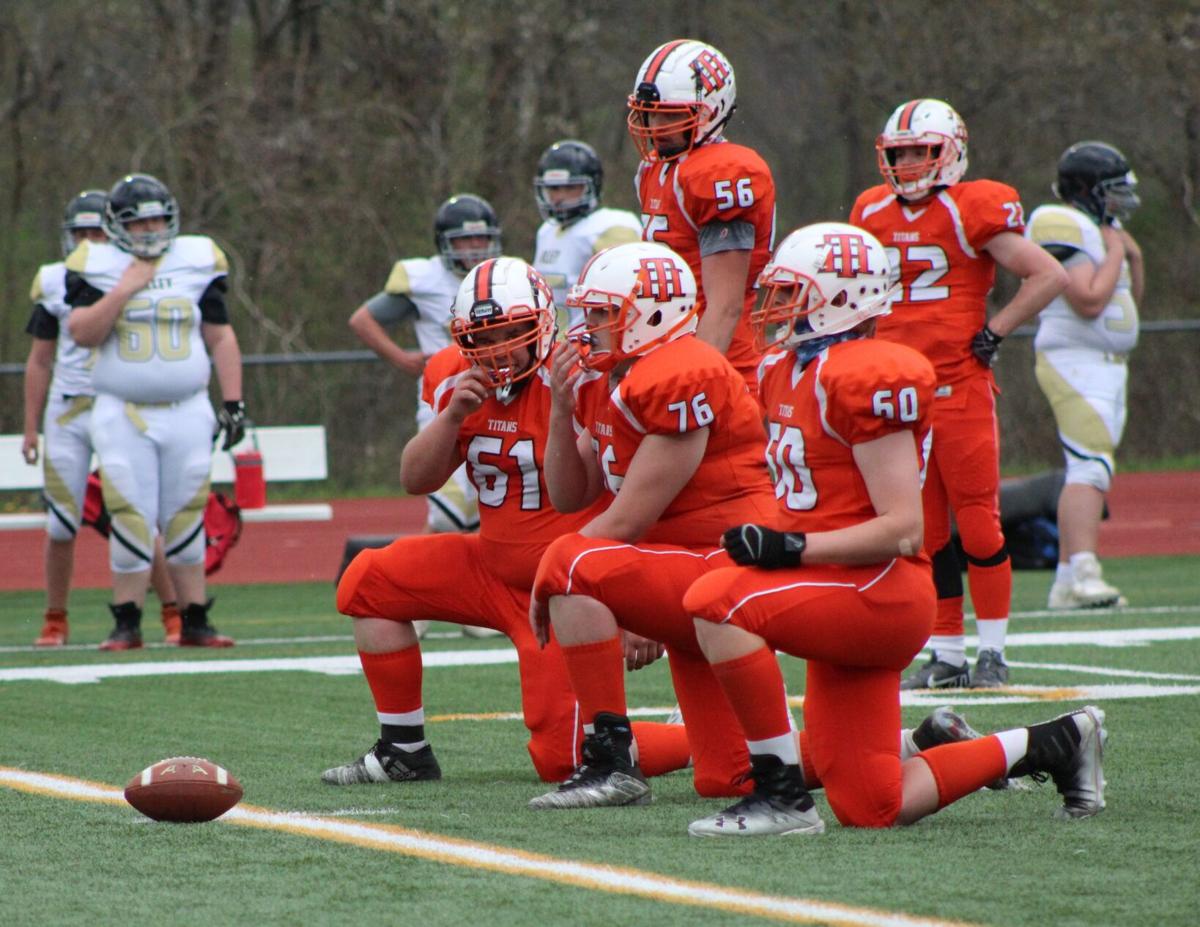 Taconic Hills’ defense lines up for a play during Wednesday’s game against Helderberg Valley at Taconic Hills High School. 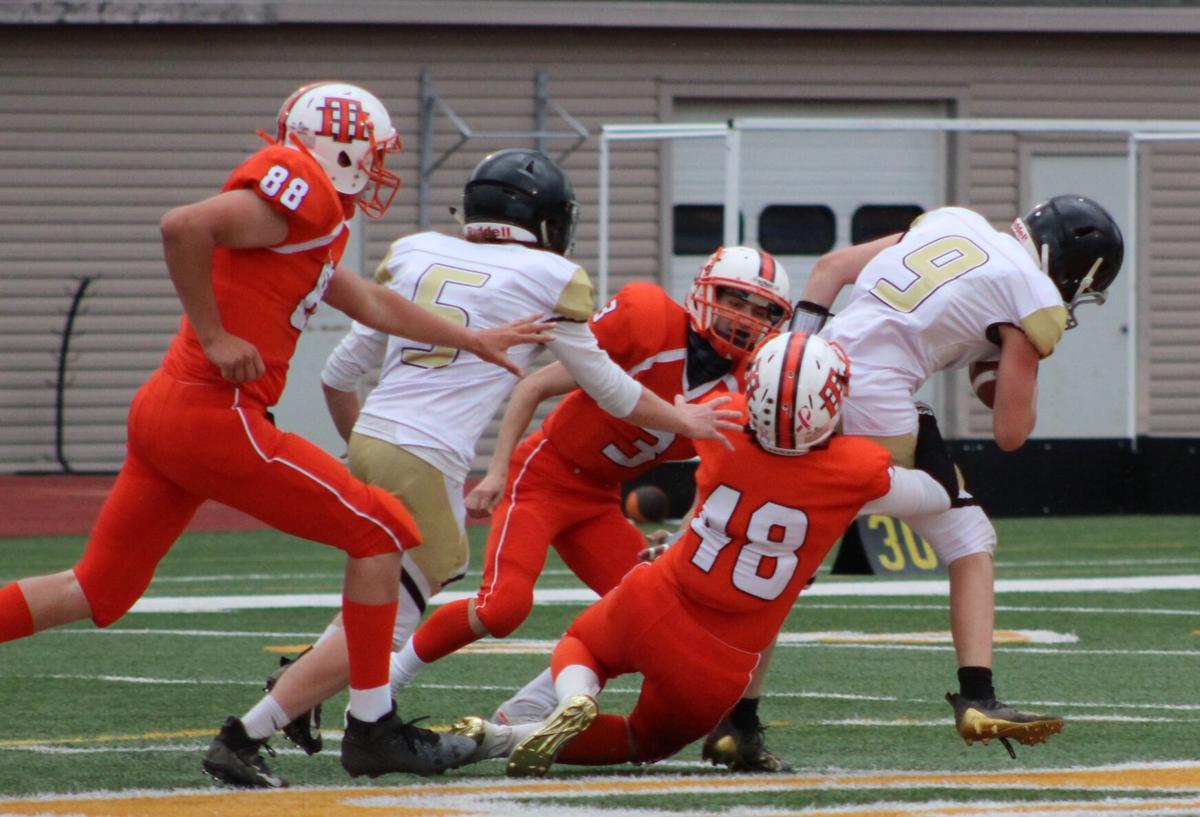 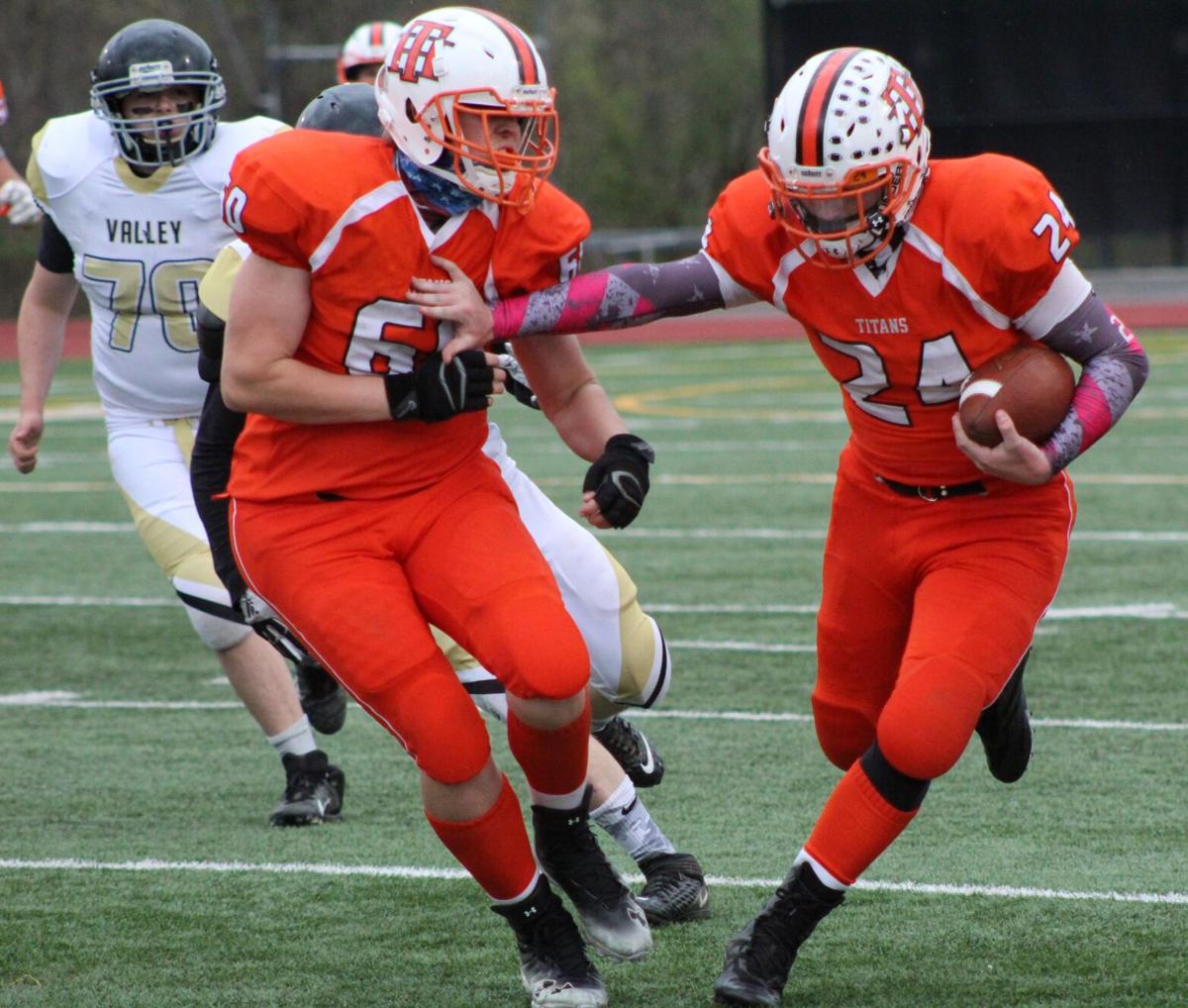 Taconic Hills’ defense lines up for a play during Wednesday’s game against Helderberg Valley at Taconic Hills High School.

CRARYVILLE —In their final game of the Fall II football season, the Taconic Hills Titans earned a 28-12 victory against visiting Helderberg Valley. Both teams played hard through every whistle, even through the nasty elements as wind whipped around the field and rain was steady from the second quarter and beyond.

The Titans started the game hot, gaining two consecutive first downs after kickoff. Quarterback Tyler Peck then completed a touchdown pass to teammate Chris Cortwright to draw first blood on the scoreboard for the Titans.

An illegal shift was called on the two point conversion, and Taconic Hills led 6-0 just three minutes into the contest. Helderberg Valley managed to drive the ball inside to the Titans’ 13 yard line, but they turned the ball over on downs, something they would do throughout the game to hinder their scoring chances.

On the flipside, Taconic Hills fumbled on the very first play of their ensuing possession to give their opponents the ball right back. Their defense stepped up to the occasion though, and the Titans forced another turnover on downs by Helderberg Valley.

After a Cortwright first down run brought the ball to the Titans’ 26, Bo Burns fumbled the ball away, and Helderberg Valley would not be denied the endzone this time around, and after a blocked extra point by Taconic Hills the score was tied at six.

With only a few minutes on the clock in the first quarter, the Titans looked to retake the lead, and they did just that. Peck scrambled in and out of the pocket to bide a little time, and threw a deep ball back across the field to a wide open Cortwright, who did the rest, and scored his second touchdown. Peck completed another pass to Dawson Cooper on the two point play, and the Titans lead grew to 14-6 to end the first.

Both teams struggled in the second quarter to move the ball and take advantage of any mistakes made by their opponents. The rain was steady now, and wind gusts were unpredictable.

For a quarter that both sides played for field position, neither team could capitalize on any momentum they amassed. To close out the second period, the Titans had a booming punt on special teams that pinned Helderberg Valley back at their own 11 yard line with 1:09 left before the break. Taconic Hills would go to halftime, still leading 14-6.

Helderberg Valley punted on their first drive of the third period, and needed to figure something out quickly. Midway through the quarter, Helderberg Valley had a big touchdown run called back due to a holding penalty, seemingly draining them of much of the sense of urgency that had displayed earlier.

After taking it over on downs yet again, the Titans found a groove for their offense. Peck completed a pass to Aaron Bonci for a first down with just over two minutes to go in the third. After a handoff went nowhere, Peck went back to Bonci for a screen pass, and Bonci crossed the goalline for the score, after catching the pass about 20 yards shy of the endzone. Peck converted the two point play on a completion to Cortwright, and the Titans were up 22-6 as the third quarter came to a close.

After a big fourth down conversion by Helderberg Valley to open the final period, a dropped pass led to another turnover on downs for the visitors, with about 9:40 remaining. Peck dropped back to pass on the next series for Taconic Hills and connected with Bonci down the middle of the field for a first down, and 20+ yard gain.

Running back Bo Burns then took a handoff for 29 yards, and was tackled at the two yard line. Burns was quickly rewarded with another carry for his efforts, and he got the ball into the endzone for another Titans touchdown.

To Helderberg Valley’s credit, they still played until the whistle every play and hustled out on the field, even down late in the game. With a first down and goal-to-go for Helderberg Valley, they ran the ball across the line for the final touchdown of the game.

A penalty discounted the made kick for the visitors, and the Titans would get the ball back with a 28-12 lead, and 1:22 on the clock. Once they took over, Tyler Peck kneeled to take the negative yardage and keep the clock running and the game was final in a matter of two kneel-downs.

Taconic Hills held onto the lead down the stretch and did just the things necessary for them to count it as a victory on Wednesday night.