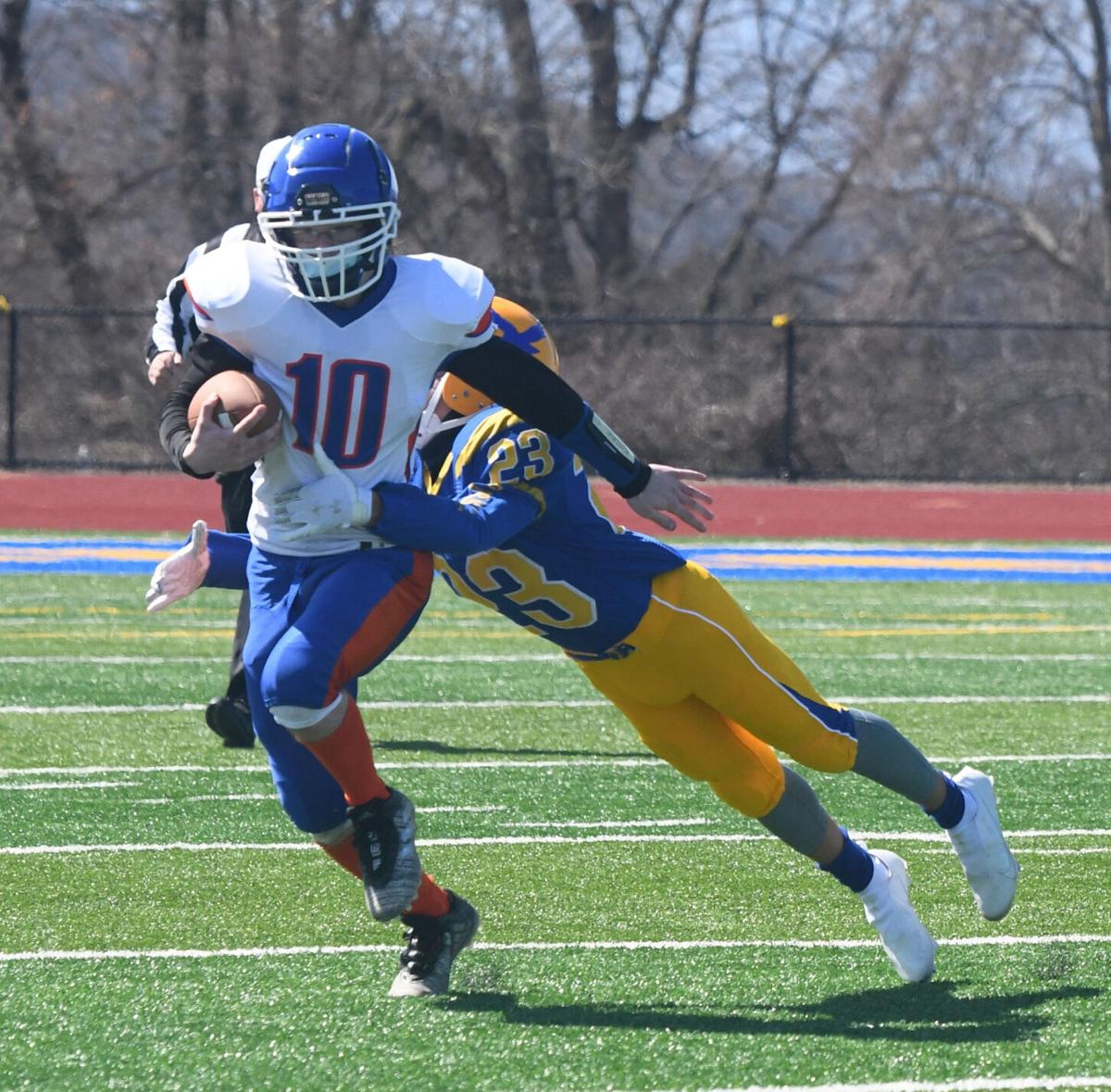 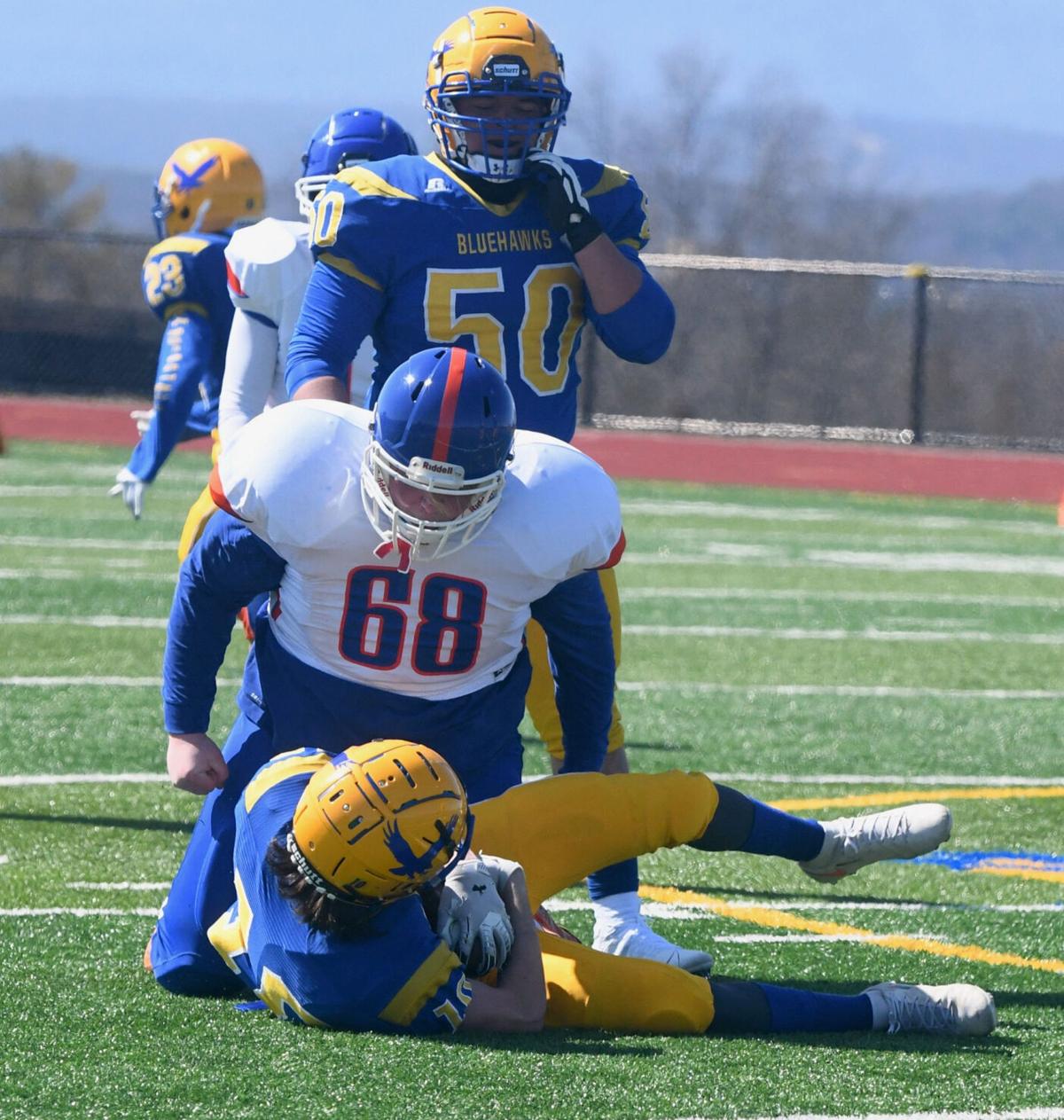 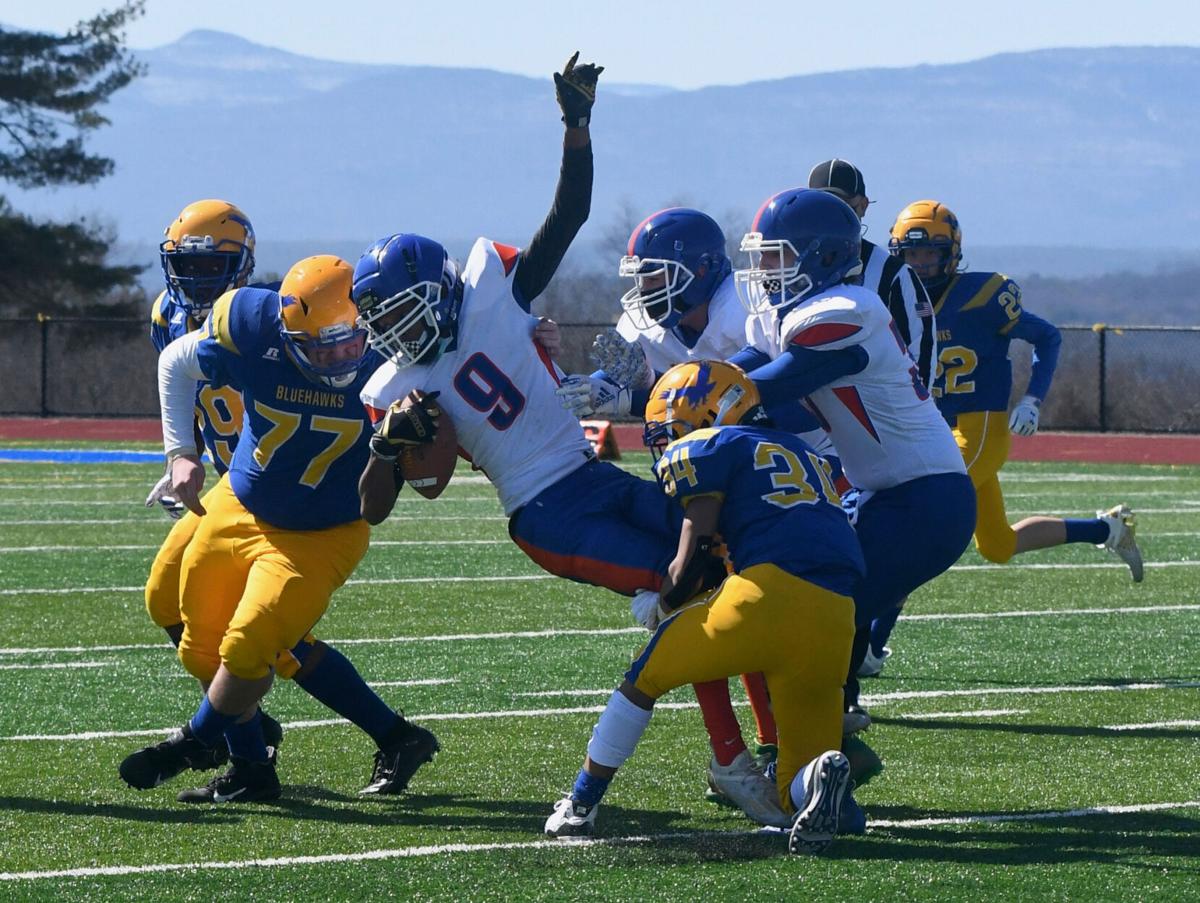 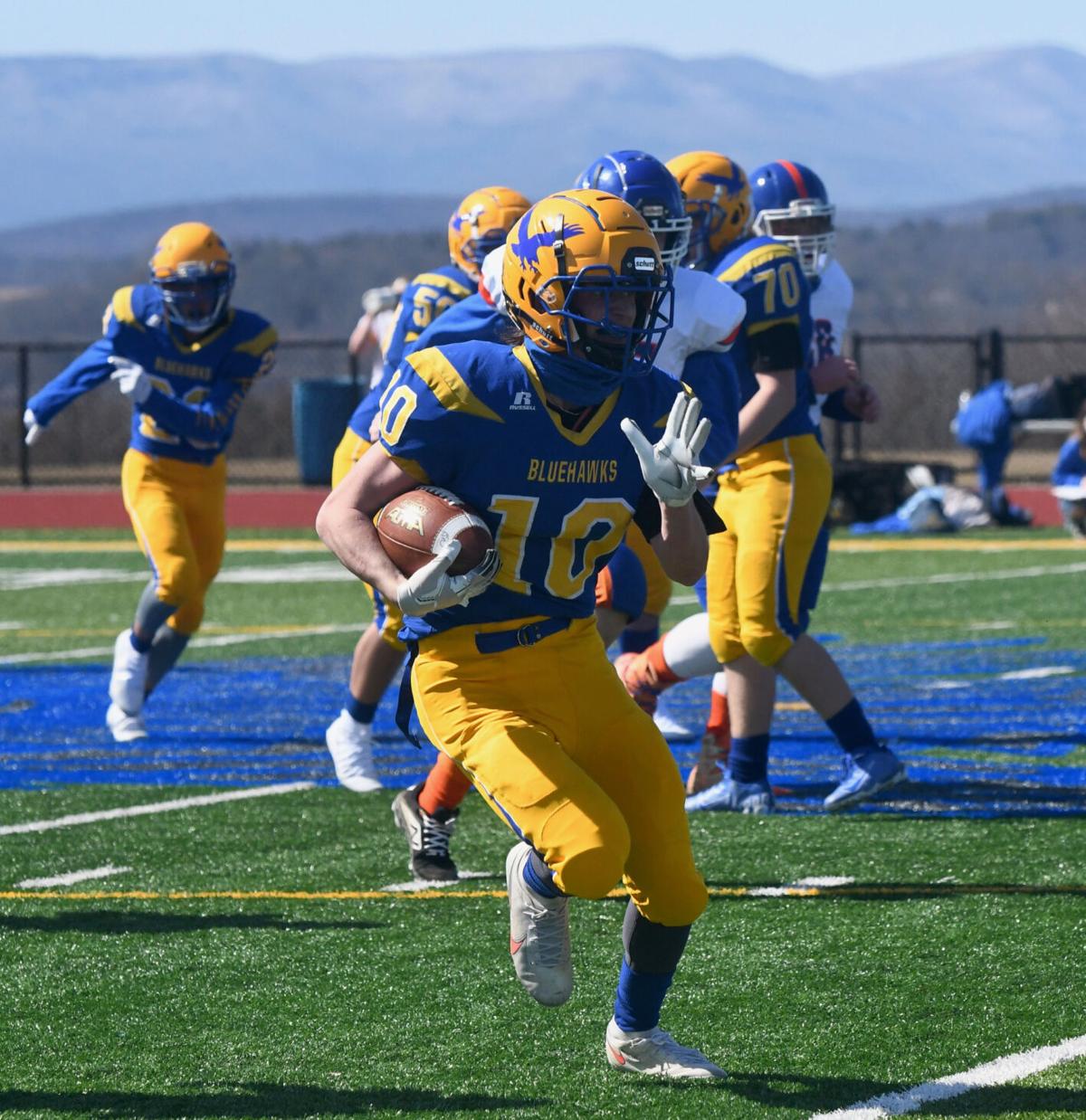 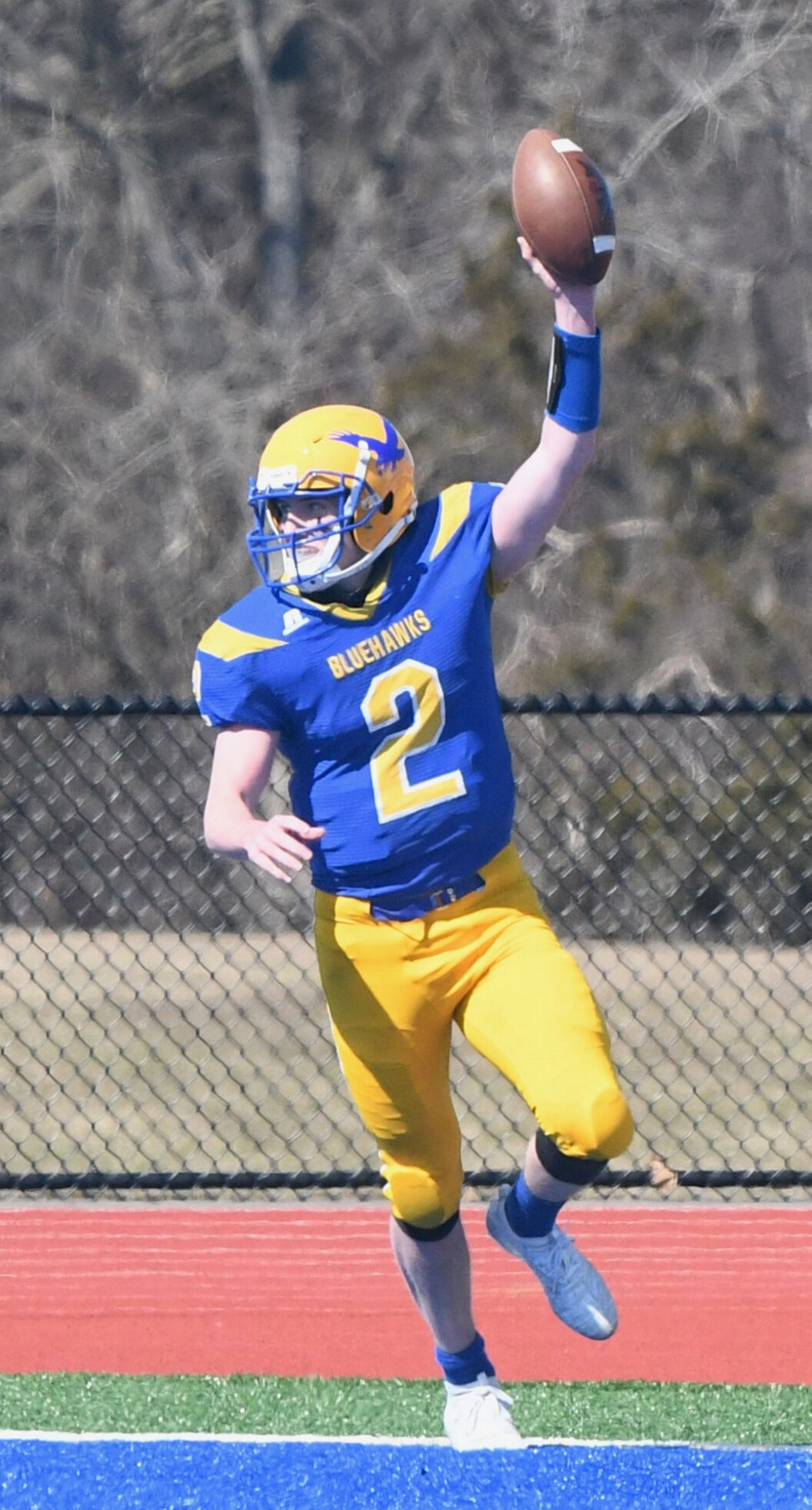 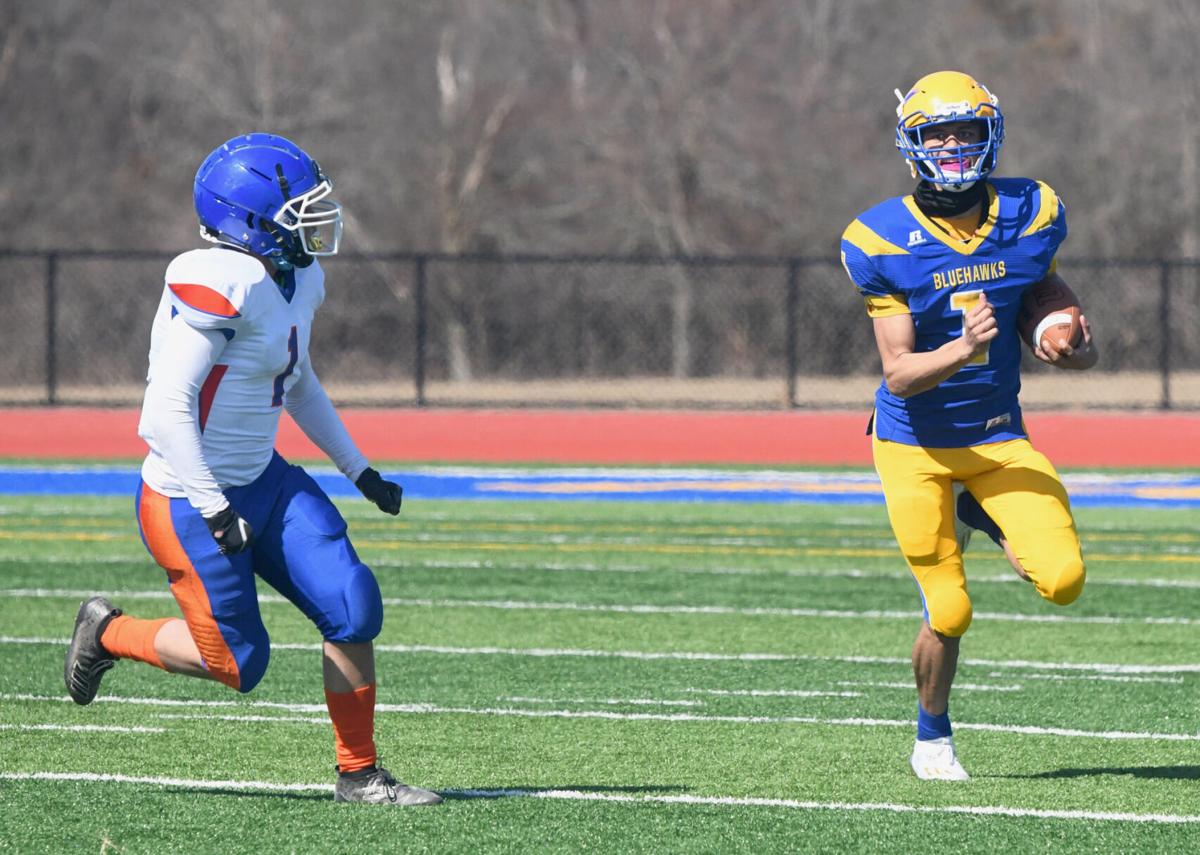 Zoey Catlin photo Hudson’s Isaiah Maines turns the corner as Catskill/Cairo-Durham’s Markus Henry moves in for the tackle during Saturday’s game at the Bluehawks Sports Complex. 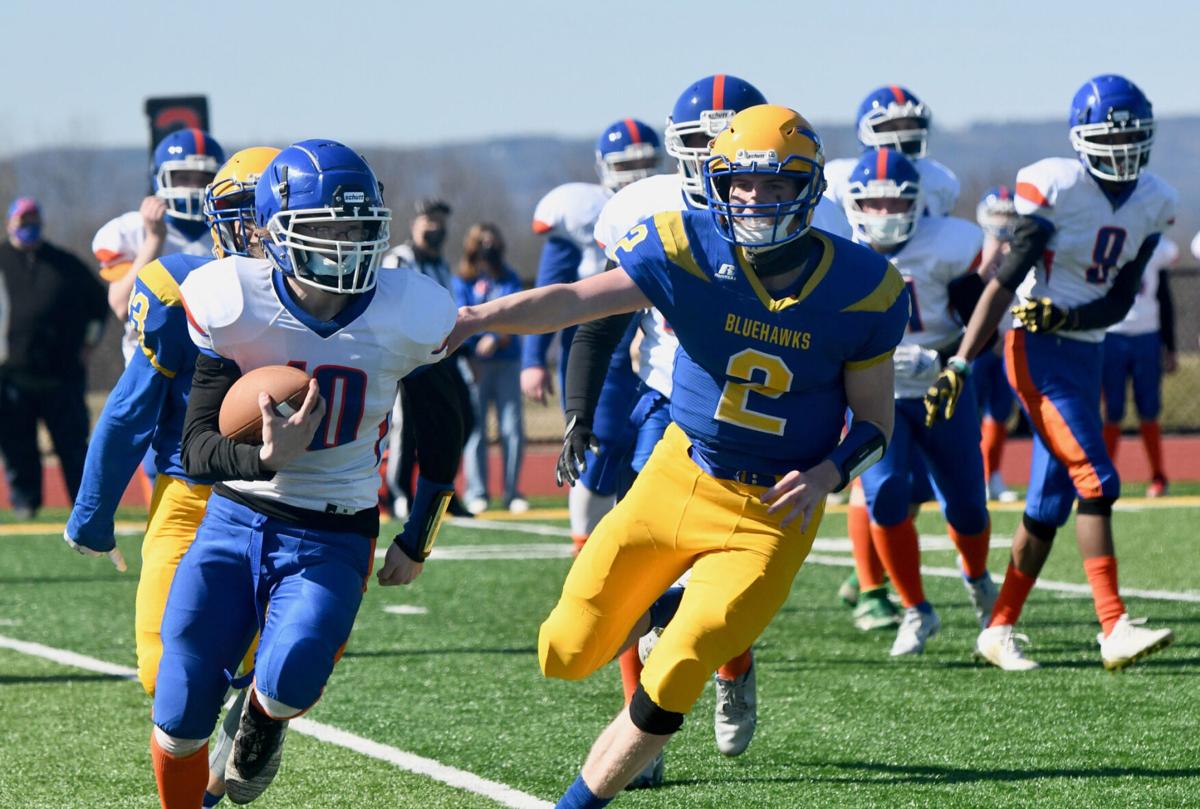 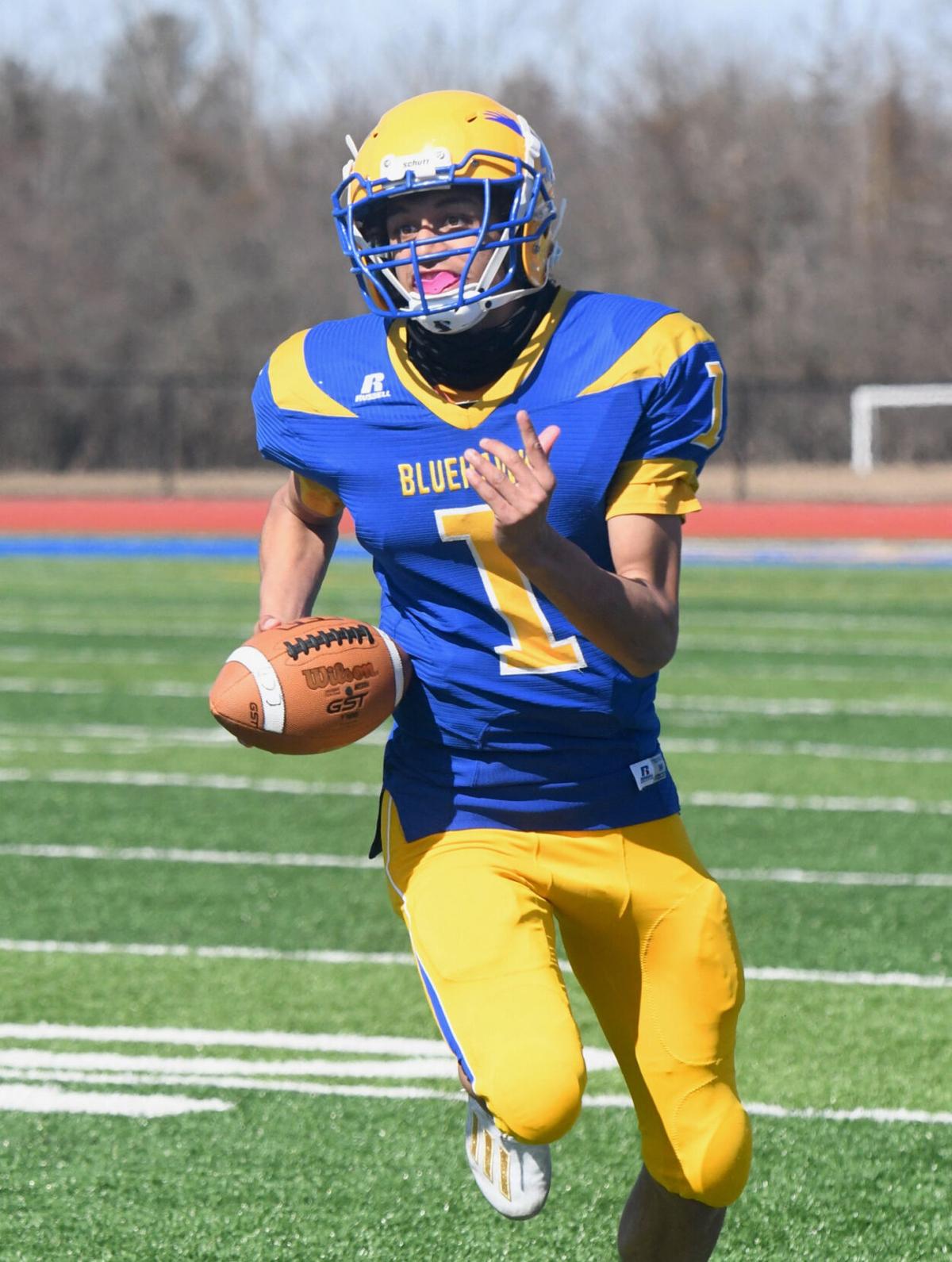 Zoey Catlin photo Hudson’s Isaiah Maines rushed for 44 yards, had 44 yards receiving, returned a kickoff 85 yards for a touchdown and had an interception return of 25 yards during Saturday’s game against Catskill/Cairo-Durham at the Bluehawks Sports Complex.

Zoey Catlin photo Hudson’s Isaiah Maines turns the corner as Catskill/Cairo-Durham’s Markus Henry moves in for the tackle during Saturday’s game at the Bluehawks Sports Complex.

Zoey Catlin photo Hudson’s Isaiah Maines rushed for 44 yards, had 44 yards receiving, returned a kickoff 85 yards for a touchdown and had an interception return of 25 yards during Saturday’s game against Catskill/Cairo-Durham at the Bluehawks Sports Complex.

HUDSON — Caleb Romano threw three touchdown passes and had two sacks on defense and Isaiah Maines had a 17-yard touchdown reception and returned a kickoff 85 yards for a score to lead Hudson to a 51-0 victory over Catskill/Cairo-Durham in Saturday’s season opener for both schools.

Romano completed 5 of 6 passes for 102 yards with one interception in leading the Bluehawks to victory. Maines, who didn’t play football his sophomore year, had 199 yards of total offense, finishing with 44 yards rushing on two carries and 45 yards receiving on three receptions, while contributing four tackles and an interception return of 25 yards on defense.

“It’s fun and it’s great to have Isaiah (Maines) back because we have great chemistry,” Romano said. “But knowing it’s a short season I’m just trying to go out there and have fun. I’m a little mad about the one pick because it wasn’t needed, but I thought we played really well on both fronts, so I’m real happy with our performance.”

Hudson scored on its first offensive possession when Romano hit a wide open Maines with a 17-yard scoring toss. They added three more scores in the second quarter on Romano touchdown passes of 45 yards to Kasey Moore and 13 yards to Mike Green and a seven-yard scoring run by Zack Bernockie.

Maines’ 85-yard kickoff return opened the second-half scoring for Hudson. The Bluehawks added scoring runs of 15 yards by Kelly Elie and one yard by Brock Saunders. They tacked on two more points on a safety when Brandon Alexander tackled a CCD ball carrier in the end zone.

“Definitely a good win,” Hudson coach John Davi said. “My guys played well. For only having two weeks of a preseason, we didn’t have a lot of mental mistakes, a turnover here, a mistake there, but other than that I was pretty happy.

“Our guys up front did a really nice job controlling it and that makes all the difference in the world. And our athletes, guys like Isaiah Maines, Caleb Romano and Mike Green, all came out and had a great day. Kasey Moore had a heck of a game. That’s such a weapon with the point after and he had a touchdown catch, too.”

Moore was a perfect 6 for 6 on PAT kicks.

Romano, who didn’t get the chance to play much defense his first two years on the varsity, had two tackles and two sacks on the same drive.

“The last two seasons I asked coach (Davi), I told him, “I’m an athlete, I want to play defense, let me play defense.” And he’s like ‘no, no, no.” This year Cook (assistant coach Justin Cukerstein) was like, ‘I’m going to put you out there and see what happens.’ I had fun. Defense, I just go out there and have fun and I got a couple of tackles and I think I think I had two sacks, too.”

Green, who played a strong game on both sides of the ball, was pleased with his team’s performance.

“My performance was OK, but I was just happy that we got the win, that’s all that matters,” Green said. “Beating Catskill, my senior year, the first time Hudson and Catskill played in football, it’s the best feeling.

“I’m proud of my guys. We didn’t have a long preseason, we got straight to it. We were working, we were grinding and it showed on the scoreboard.”

Green was grateful just for the opportunity to play his senior season after it looked for a long time that he might not get that chance because of the Covid-19 pandemic.

“Honestly, I always kept faith,” Green said. “I almost graduated, but I had to keep faith we’d be playing football, so I stayed in school and Covid went down and we got lucky.”

Romano agreed with Green and is thankful just for a chance to play at least an abbreviated schedule this year.

“It’s amazing,” Romano said. “Football brings us all together as a team. A lot of us aren’t even in school. we don’t get to see each other, so we’re here, we’re together, we’re having fun. Honestly, I didn’t think we were going to have a season and when I heard we were, I was so happy. It’s joy to play every time.”

Hudson hosts Schalmont and Catskill/Cairo-Durham goes to Coxsackie-Athens on Friday at 6 p.m.