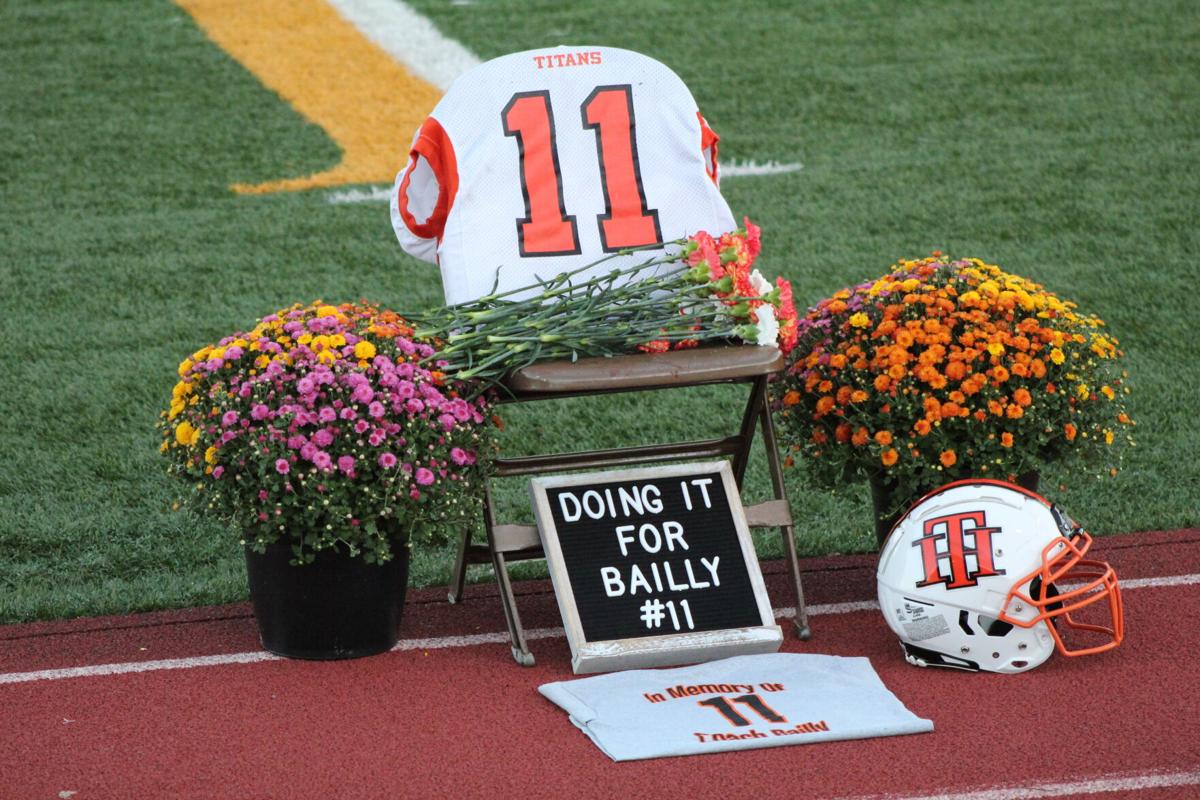 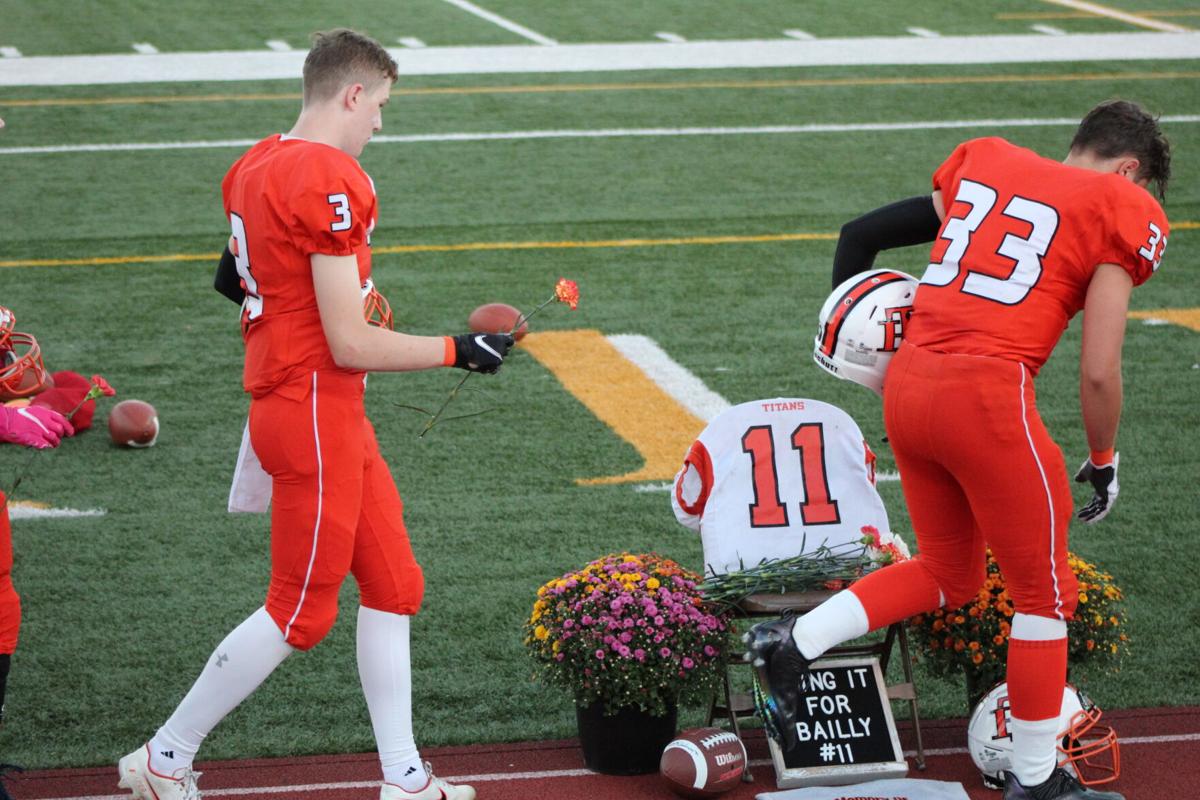 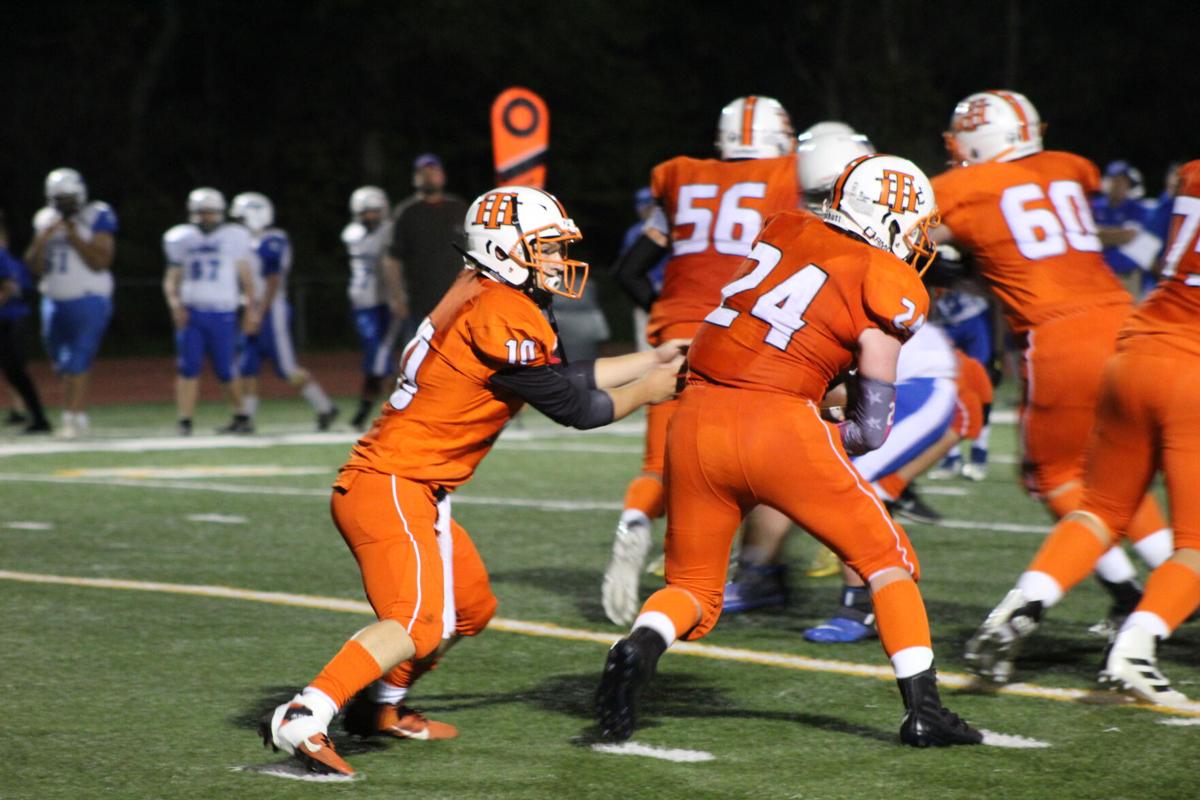 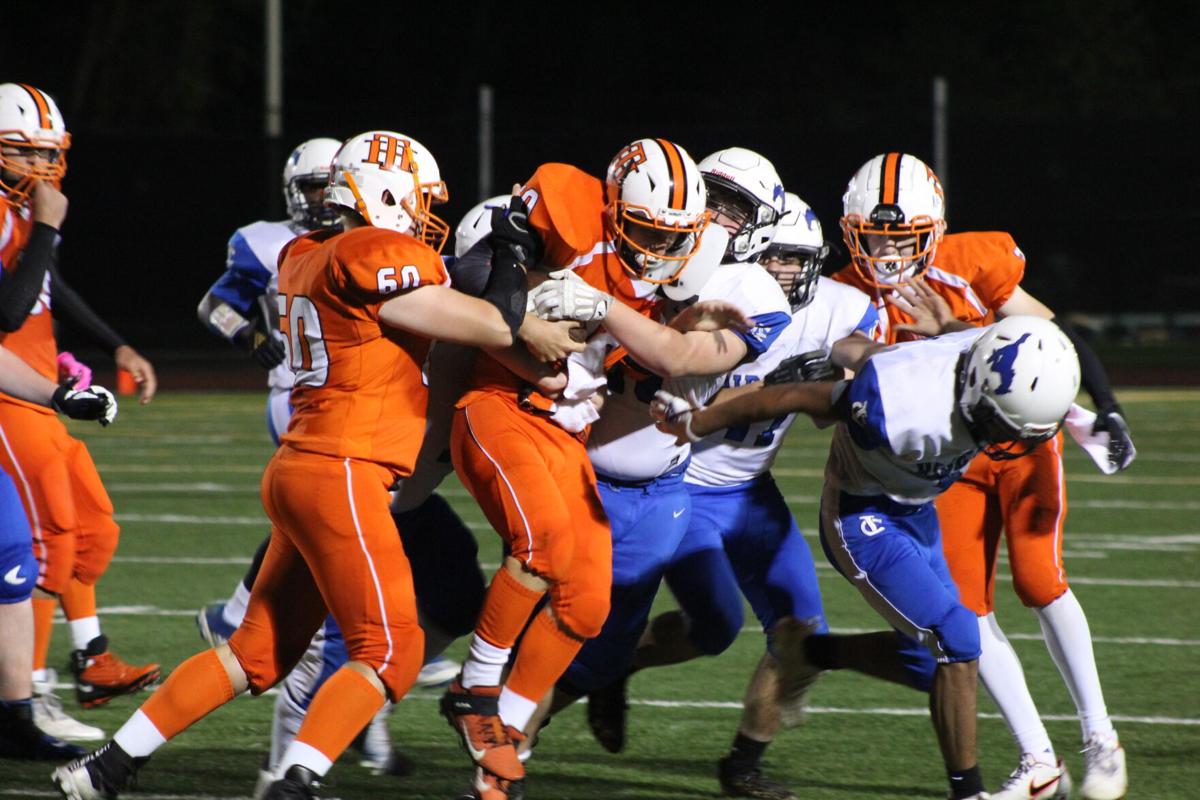 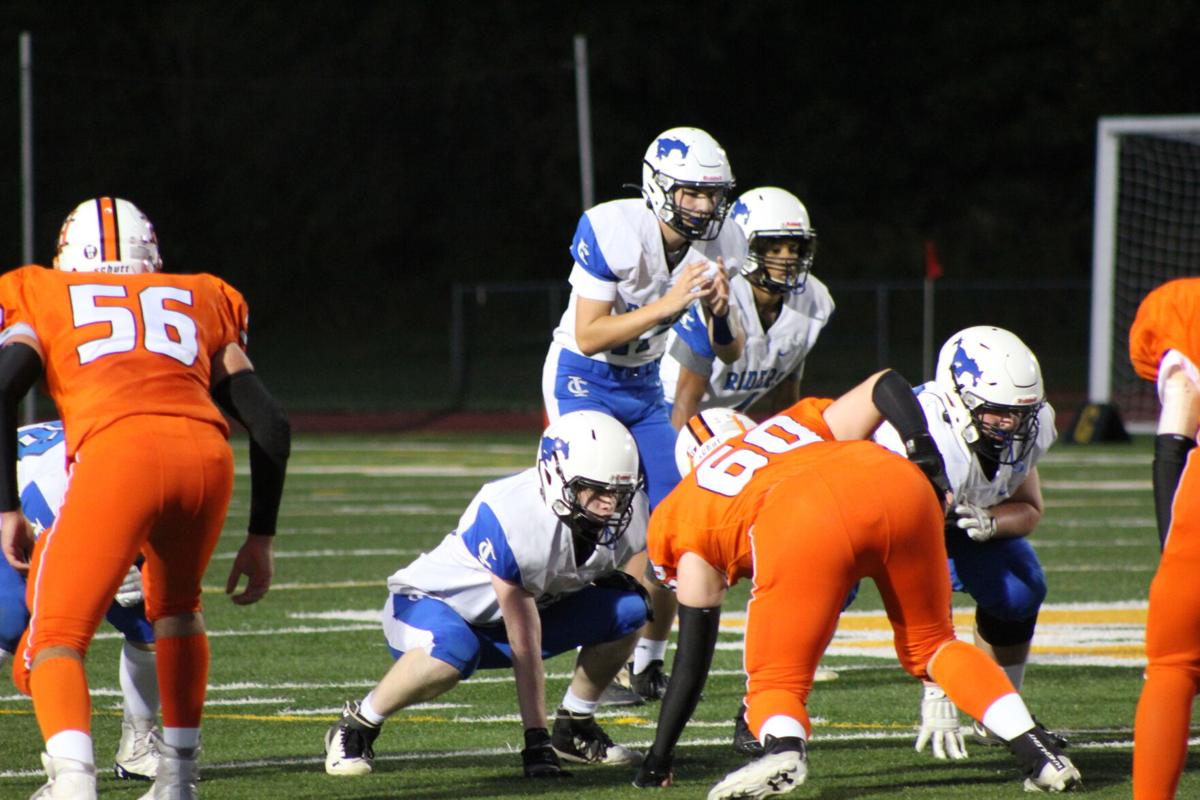 The Titans honored their late assistant coach Bobby Bailly before the game with a memorial that included a jersey, a helmet, a custom t-shirt that read “In Memory of Coach Bailly,” and a message board that said “Doing it for Bailly #11.” The Titan players lined up and each placed a flower on the memorial for their lost coach one at a time. Taconic Hills also announced that the new Bobby Bailly Scholarship Fund had already raised $10,000.

The Riders and Titans traded three and outs to start the game off as they got underway. The first first down of the contest came on a defensive pass interference call on the Titans, keeping the Riders’ drive alive. After another first down was reached on a quarterback run by Joe Penzabene, he tucked it and ran up the middle again on a similar play call that resulted in a touchdown. Abigail Dolge’s kick on the point-after was successful and Ichabod Crane led 7-0 with 4:27 left in the first quarter.

On the ensuing kickoff, Taconic Hills’ Tyler Peck took his first of many hard hits on the night as he was headed out of bounds and there was no foul called for a late hit on the Riders. After trading possessions back and forth again, Bo Burns muscled through two tough running plays to give his Titans a first down to end the first quarter.

Just a few plays into the second period, Taconic Hills went for a sweep to the right but they could not pick up the first and they turned it over on downs. Burns got into the backfield quickly on the first play and tackled Zion Evans for a six yard loss. Penzabene completed his next pass however, this time to Austin Race for a big gain and down to the TItans’ 30 yard line. After converting a third and eleven play, Penzabene scampered into the end zone for his second rushing touchdown of the game. The kick was good afterwards, and Taconic Hills was up 14-0 with 7:13 left in the first half.

On the next drive for the Titans, Tyler Peck was still enduring pressure and getting taken down hard by Ichabod Crane, but he showed a lot of grit by staying aggressive and having a willingness to run. The Titans’ offensive line was not doing Peck too many favors either, with the Riders’ defense able to get into the backfield on nearly every play.

Once inside the red zone, Peck threw it right down the seam, hitting his big target receiver Charlie Beck in stride as his feet reached the endzone for a touchdown. The Titans went for a two point conversion that was no good, but they cut the Riders’ lead to 14-6. On the Riders’ drive, Penzabene was about to be sacked so he tried to force an incomplete pass, but he threw the ball right into the hands of Landon Halsted and Taconic Hills had it at about midfield.

The Titans had trouble moving the ball again and they turned it over on downs, right back to the Riders. Taconic Hills would force yet another interception however, this time by Ryan Walch, but the Titans would have to start at their own seven yard line with only 21 seconds left in the half. Ichabod Crane sent the pressure at Peck and he fumbled the ball into the endzone with no choice but to fall on it and take the safety to give the Riders a 16-6 lead now going into halftime.

A play after Taconic Hills received the second half kickoff, Peck was tackled from behind and pulled backwards in a very unnatural motion, and looked to hurt his leg badly on the play. After being on the ground for a few minutes Peck would be helped off of the field and was replaced by Halsted; Peck would not return.

The Riders would get the ball back and just continue looking comfortable on the field. Penzabene moved the Ichabod Crane offense up the field with relative ease, and soon found a hole to run through and score his third touchdown of the night so far. After the kick the score was 23-6 and the Titans needed to get their offense going quickly if they wanted a chance at this game. On a 4th & 22 play near the end of the quarter, the Titans ran a fake punt and threw it to Ryan Walch for a first down and that ended the third period.

Within a couple of plays to begin the fourth quarter, the Titans turned it over on downs back to the Riders near the 50 yard line. After an Ichabod Crane timeout before a third down and twenty-plus yard play, the Titans intercepted another pass and they took over past midfield themselves. After multiple drives that were minimal in length for each side, Ichabod Crane was inside scoring distance on offense again.

Inside the 20 yard line, Connor Ackerly took the hand off and found a hole on his way to the end zone for a touchdown to really put this game out of reach for the Titans with just 1:31 remaining. After the Riders managed yet another interception, this time by Zion Evans, Penzabene had enough room to take a knee and let the clock run out. The Ichabod Crane Riders defeated the Taconic Hills Titans 30-6 on the night, going into the weekend with a satisfying conference win.