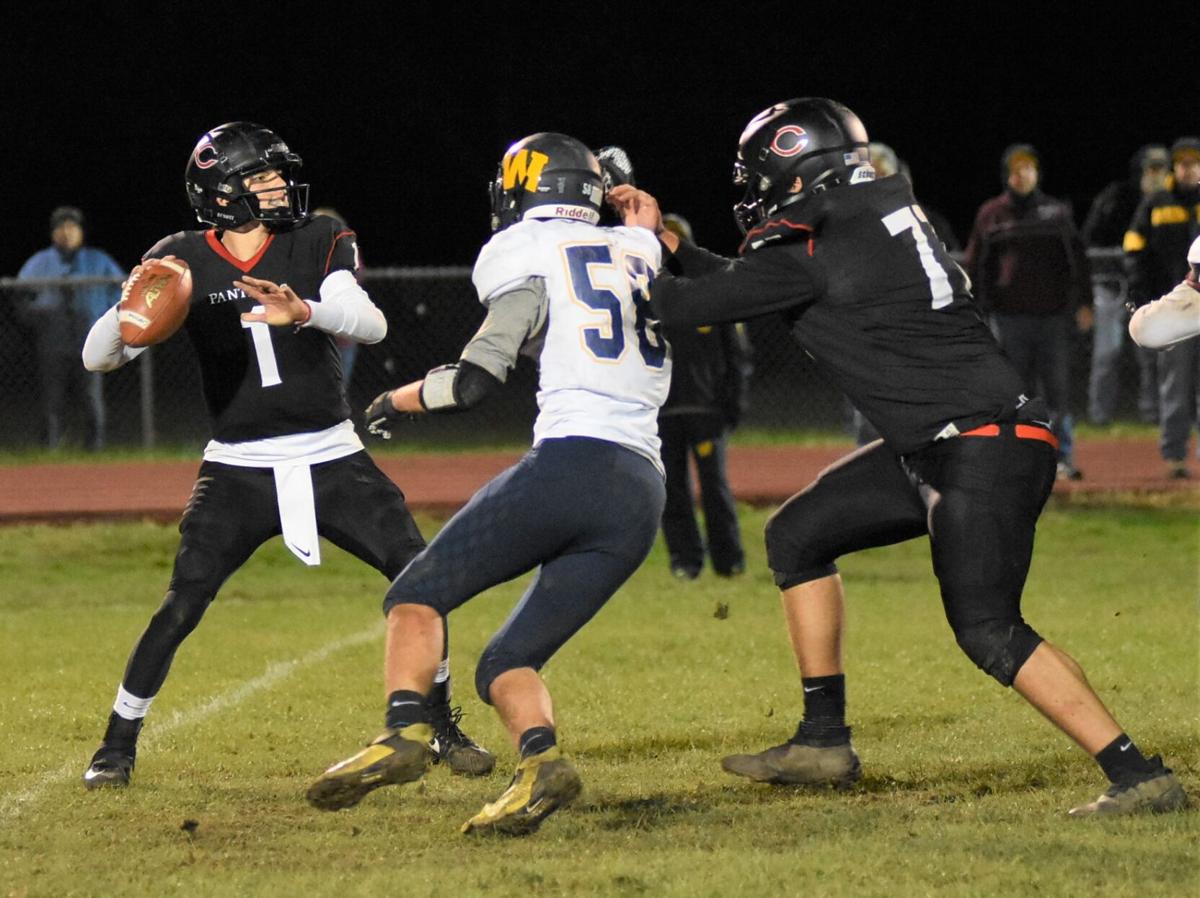 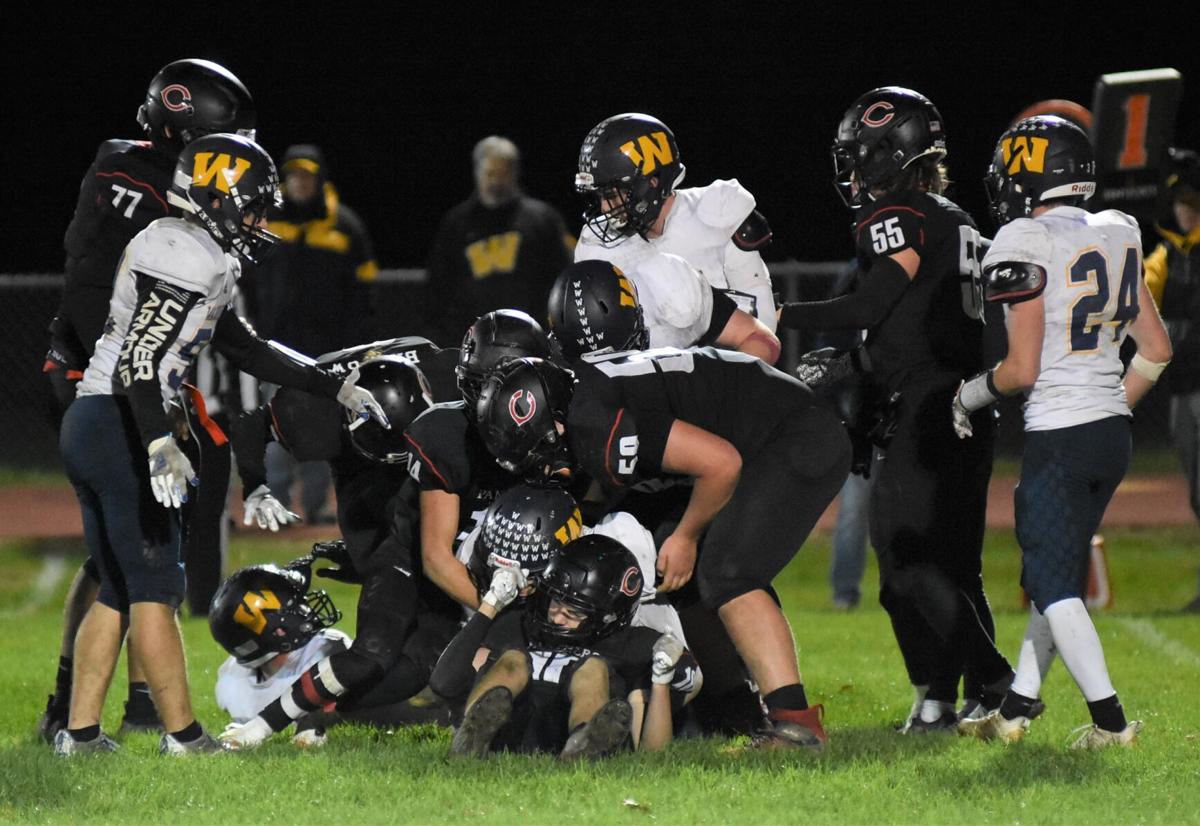 A Warrensburg ballcarrier is swallowed by by a pack of Chatham defenders during Friday's Class D game at Chatham High School. 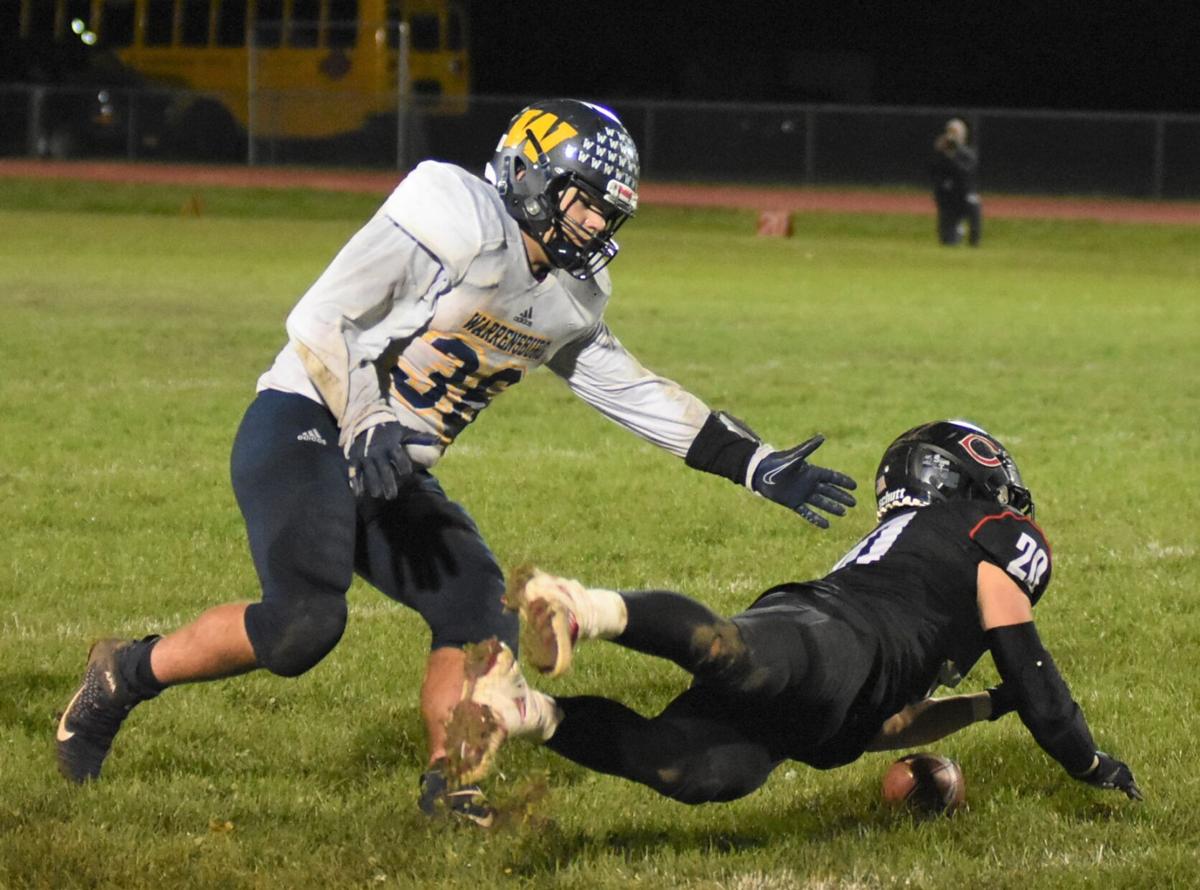 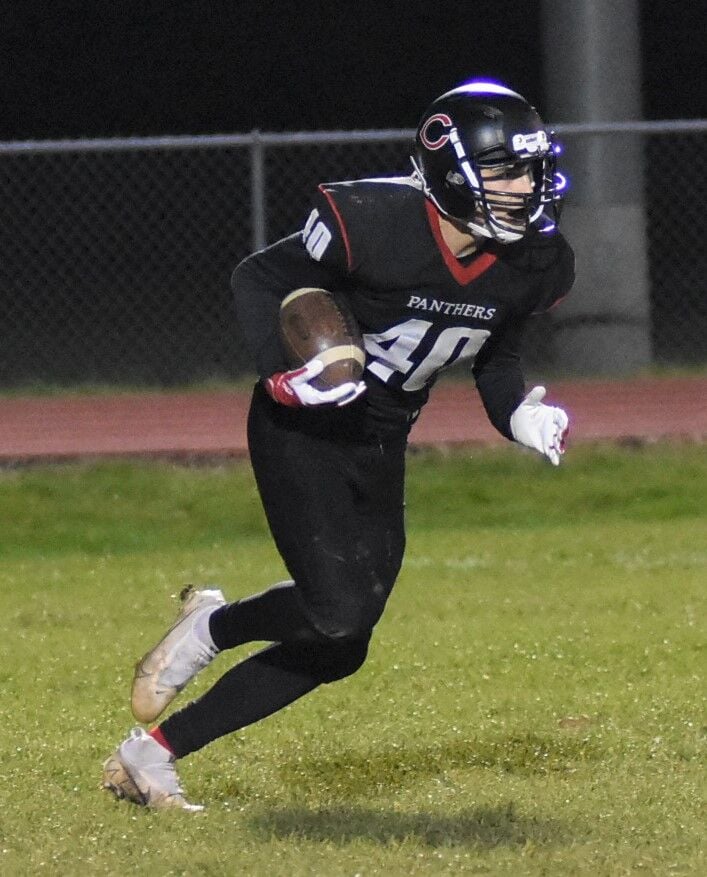 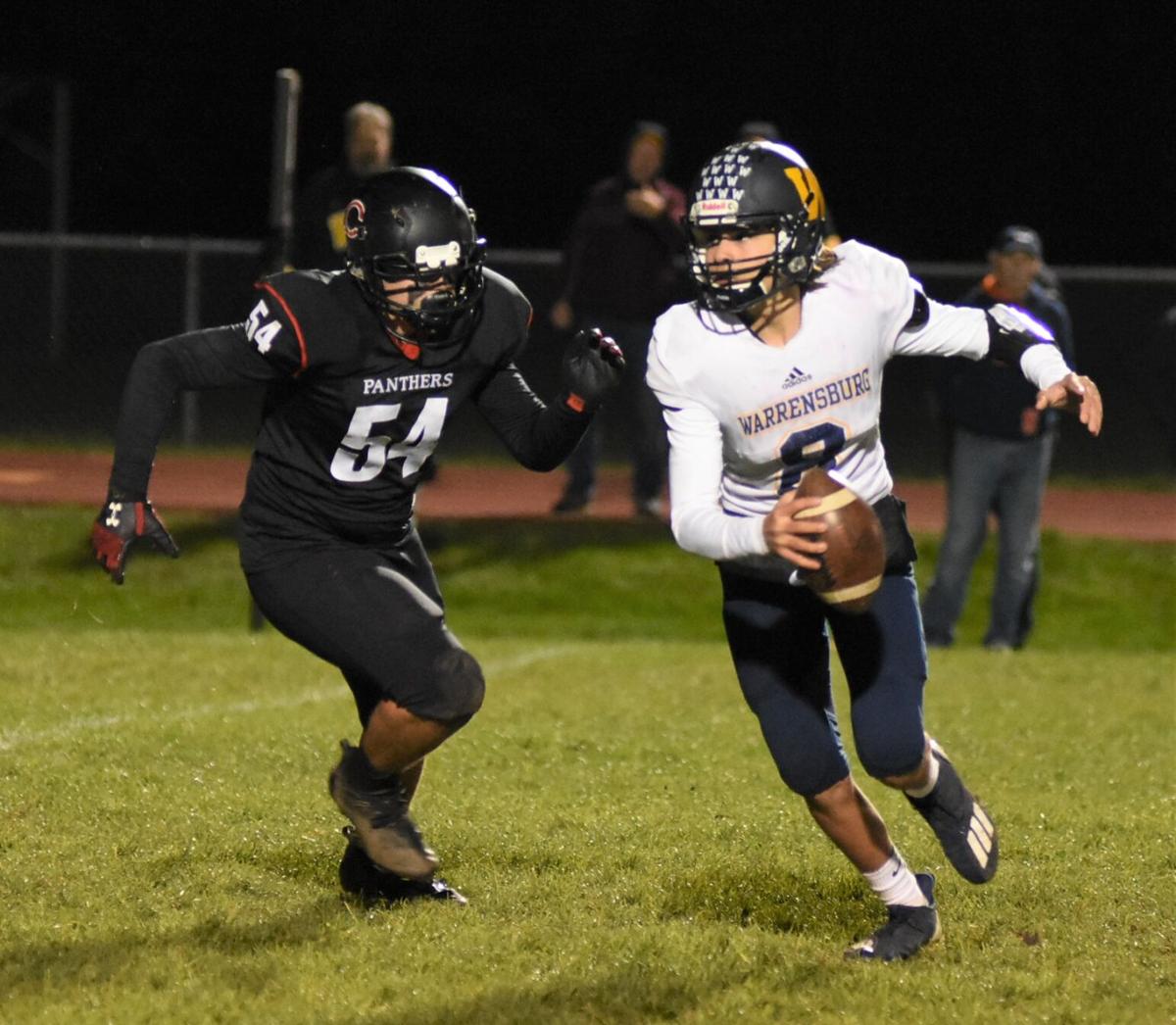 Warrensburg quarterback Caden Allen (8) gets chased out of the pocket during Friday's Class D game against Chatham at Chatham High School. 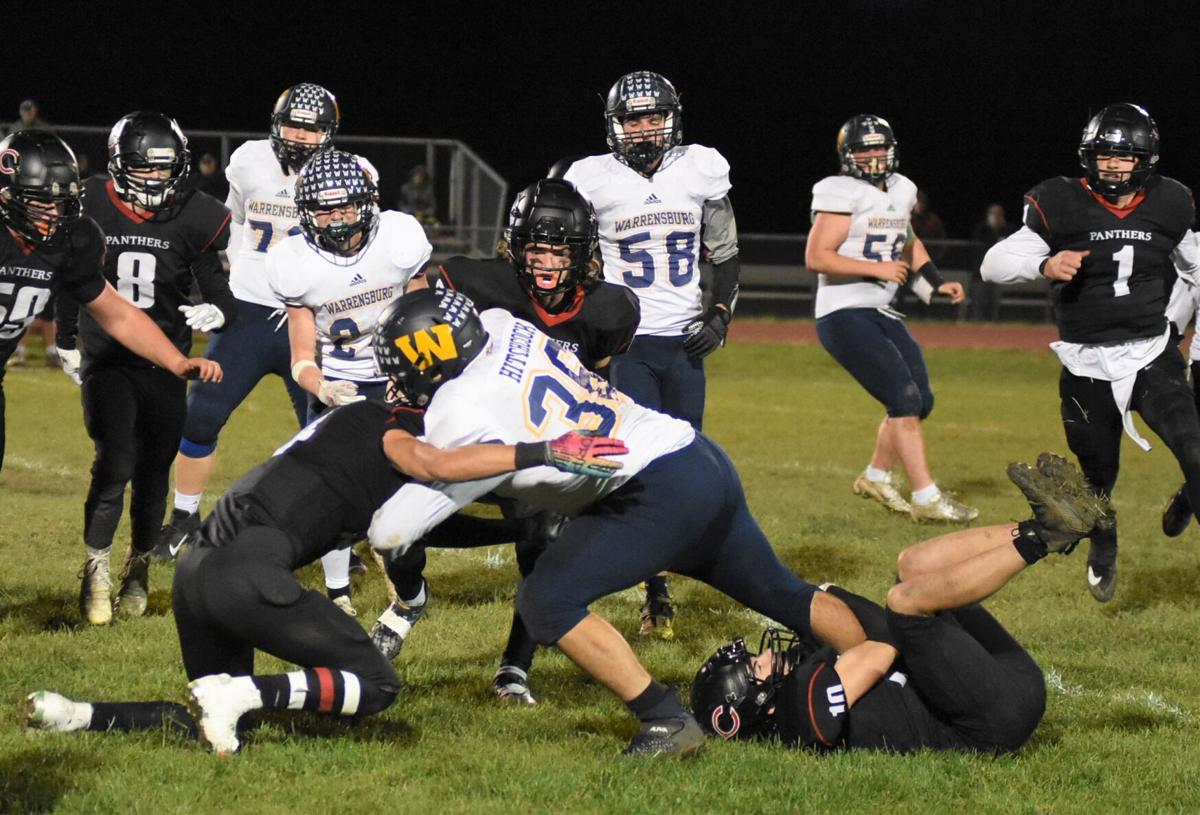 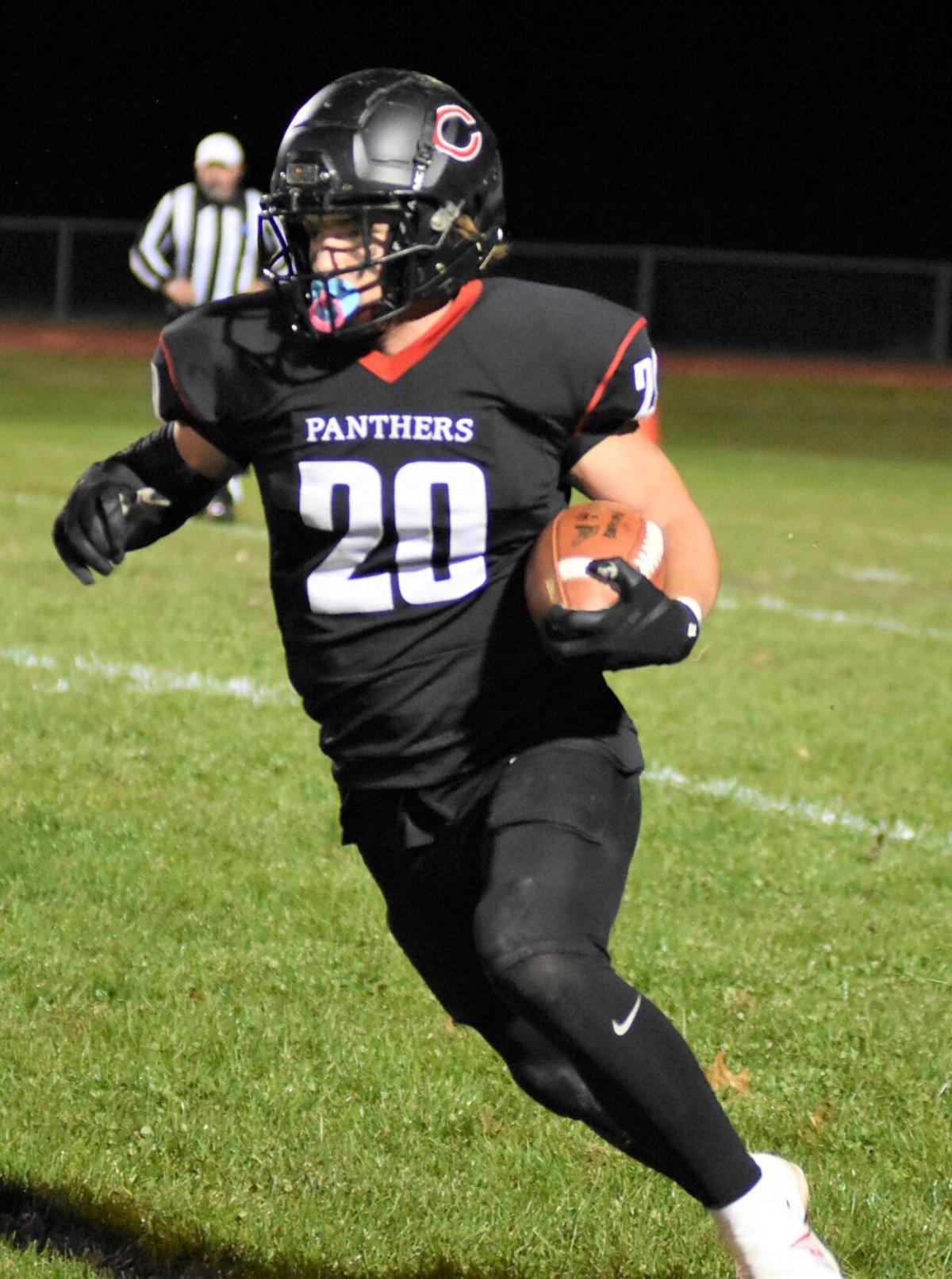 Chatham's Konur Barlow (8) leaps to pull in a pass during Friday's Class D game against Warrensburg at Chatham High School.

A Warrensburg ballcarrier is swallowed by by a pack of Chatham defenders during Friday's Class D game at Chatham High School.

Warrensburg quarterback Caden Allen (8) gets chased out of the pocket during Friday's Class D game against Chatham at Chatham High School.

Chatham's Konur Barlow (8) leaps to pull in a pass during Friday's Class D game against Warrensburg at Chatham High School.

CHATHAM -- The Chatham Panthers lost a close game on the gridiron Friday night to the Warrensburg Burghers, 28-20.

The game was close throughout, but Warrensburg made just a handful more plays in the clutch to pull ahead of Chatham in the fourth quarter.

The Burghers’ first drive of the game was a long one, eating up five and a half minutes off the clock in the first quarter. The Panthers stopped them on fourth down at the four yard line however, and forced a turnover on downs.

After two consecutive first downs for Chatham, they now had some more breathing room with the ball at their own 25 yard line. Panthers quarterback Tyler Kneller then threw a screen pass to running back Matt Radley who took it up the sideline at least 30 yards and into Burgher territory.

Unfortunately for the Panthers, they went three and out from there and had to punt with 1:06 left in the first quarter. Burghers’ running back Dylan Winchell answered with a long run for a first down as the quarter ended with the scoreless tie intact.

The Burghers had another substantial drive in the second quarter, and they finished it off this time with a touchdown run by Tristan Hitchcock. After the two point conversion was no good, Warrensburg had a 6-0 lead with 6:13 to go before halftime.

After stopping Chatham on their next drive, Warrensburg got the ball back and looked to extend their lead. The Burghers did just that, thanks to a 70 yard touchdown run by Winchell. The two point play was successful and the Burghers were up 14-0 with 3:39 left in the half.

The Panthers responded on their following drive as Kneller completed a 51 yard pass to Lennie Sitzer inside the five yard line. Kneller took the ball over the goal line on a quarterback sneak, but a missed kick kept it at 14-6 at halftime.

Chatham received the second half kickoff and looked to tie the game with their next drive. On a third and short play, Radley bounced it to the outside and scampered 58 yards down the sideline and into the end zone for the touchdown. Kneller completed a pass to Kyle Jackson for the two point conversion and the game was knotted at 14 at the 10:17 mark of the third period.

Chatham almost made a huge stop on fourth down on Warrensburg’s next drive, but they were thrown off by a hard count and the Burghers drew them into an encroachment penalty to give them a free first down. A few plays later Hitchcock ran it in again for another Burghers touchdown with 4:06 to go in the third and Warrensburg was up 20-14 after another failed two point conversion.

Chatham responded on their subsequent possession after a good return by Kyle Jackson gave the Panthers a start at their own 35 yard line. After a roughing the passer gave the Panthers a first down at midfield, Kneller kept it and sprinted down the left sideline and stepped out at the one yard line for a 49 yard run. He kept it again on the next play and stretched it over the goal line for a Chatham touchdown. The point after was blocked and it was tied 20-20.

The kickoff was squibbed and the ball was fielded by Warrensburg and downed at their own 47 yard line for favorable field position. Chatham would have stopped them to bring up fourth down but the Panthers were called for a late hit out of bounds on the Burghers and the free yardage gave them a first down. The Burghers got up to the line quickly and drew The Panthers offsides again to end the third quarter with the game still tied, 20-20.

Dylan Winchell took an inside handoff through the seam and blew past the secondary on the first play of the fourth quarter for a 23 yard Burghers touchdown. The two point conversion was successful and Warrensburg took a 28-20 lead just seven seconds into the period.

The following Panthers drive had little to no ball movement and all they did was take time off the clock as they turned it over on downs after not converting a fourth and one play. Chatham needed to make a stop on defense or create a turnover after giving the ball back to Warrensburg, whose rushing attack was bruising them all night, with 8:14 to play.

The Panthers did enough to force a punt by the Burghers with just over 3:30 on the clock. Matt Radley made a catch in the backfield on a dangerous play where he was hit almost simultaneously, but he held onto the ball which was the important thing for the Panthers. Chatham’s sideline was livid after there were no holding or pass interference calls made in the secondary on a couple of attempted pass plays. However their abandonment of the run would cost them dearly and they could not just look for penalties at the end of the game to get them yards.

The Panthers' final play on offense came down to a fourth and ten, another pass that was tipped and fell incomplete. Chatham turned it over on downs and their fate was sealed as Warrensburg was content to run the ball and keep the clock moving.

The Burghers ran it three times to use up the 2:29 that was left, and the teams lined up for handshakes after Warrensburg dug in their heels for the 28-20 road win over the Chatham Panthers.