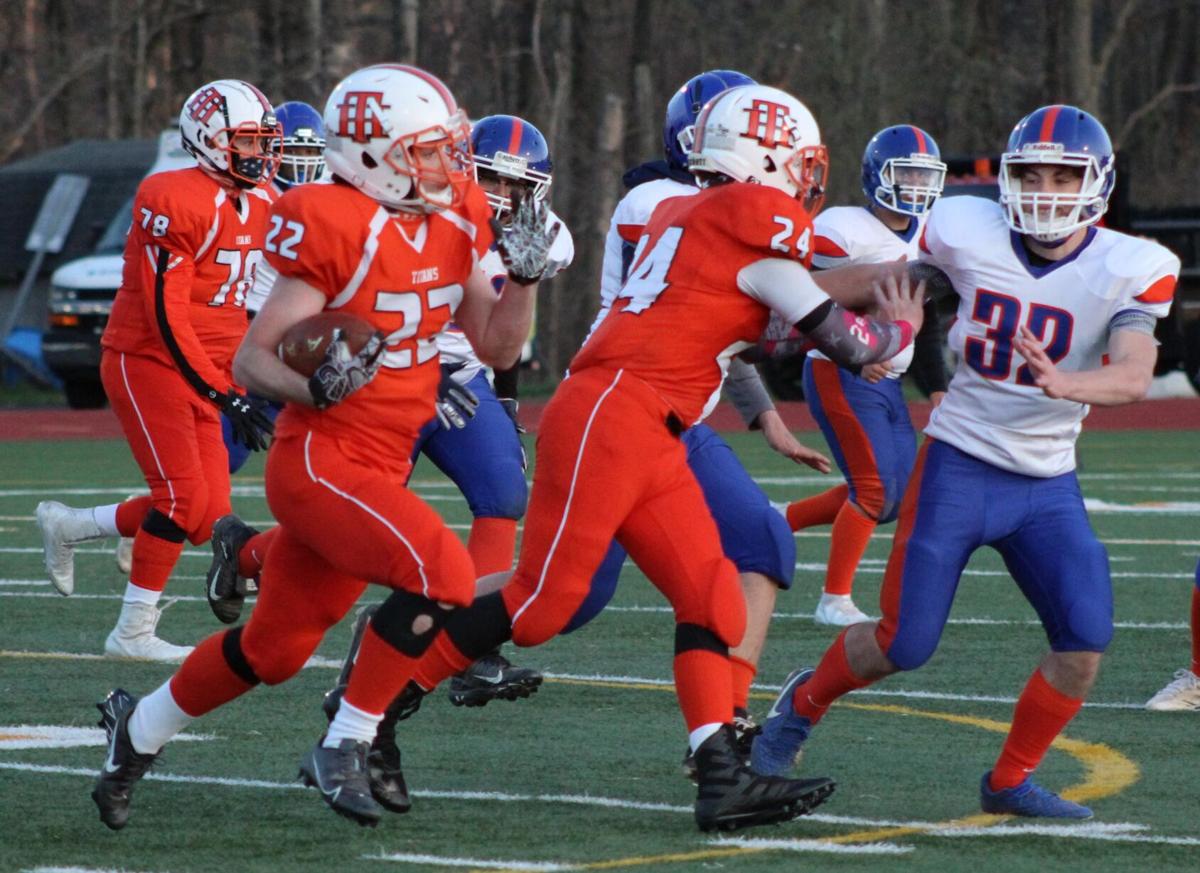 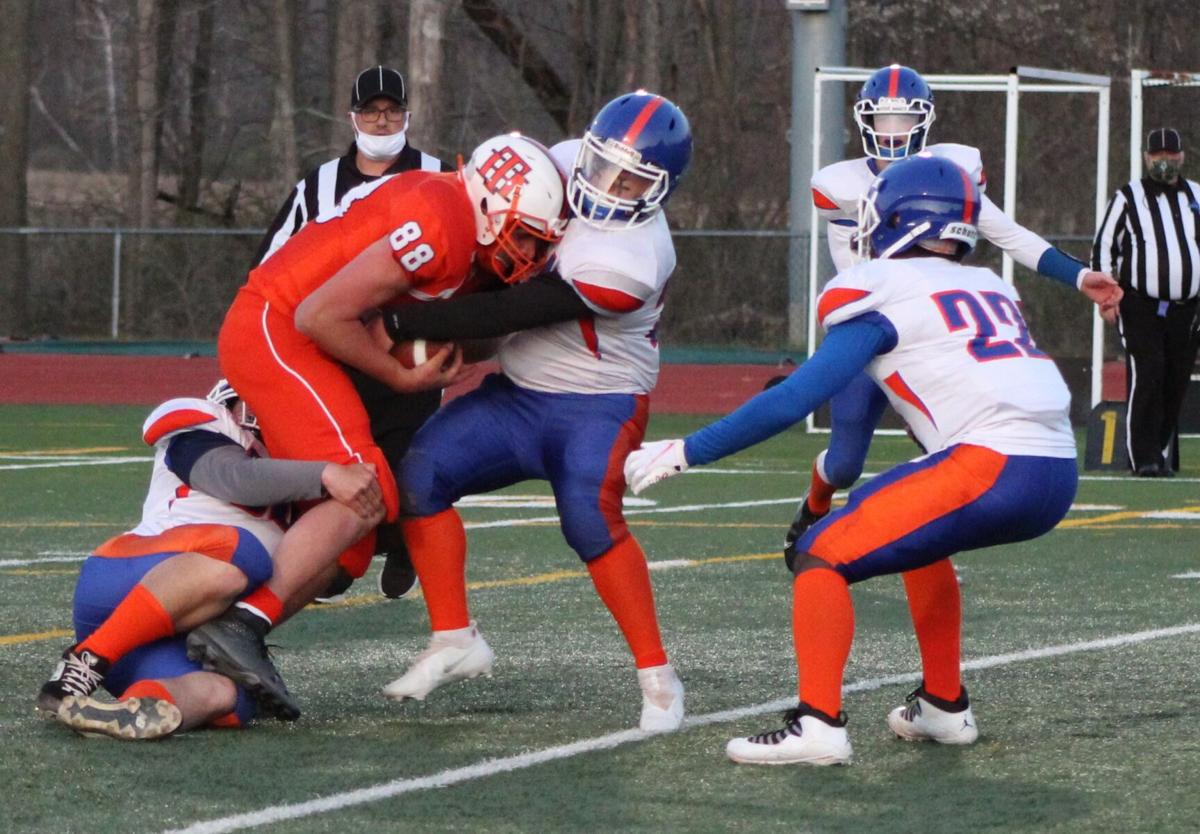 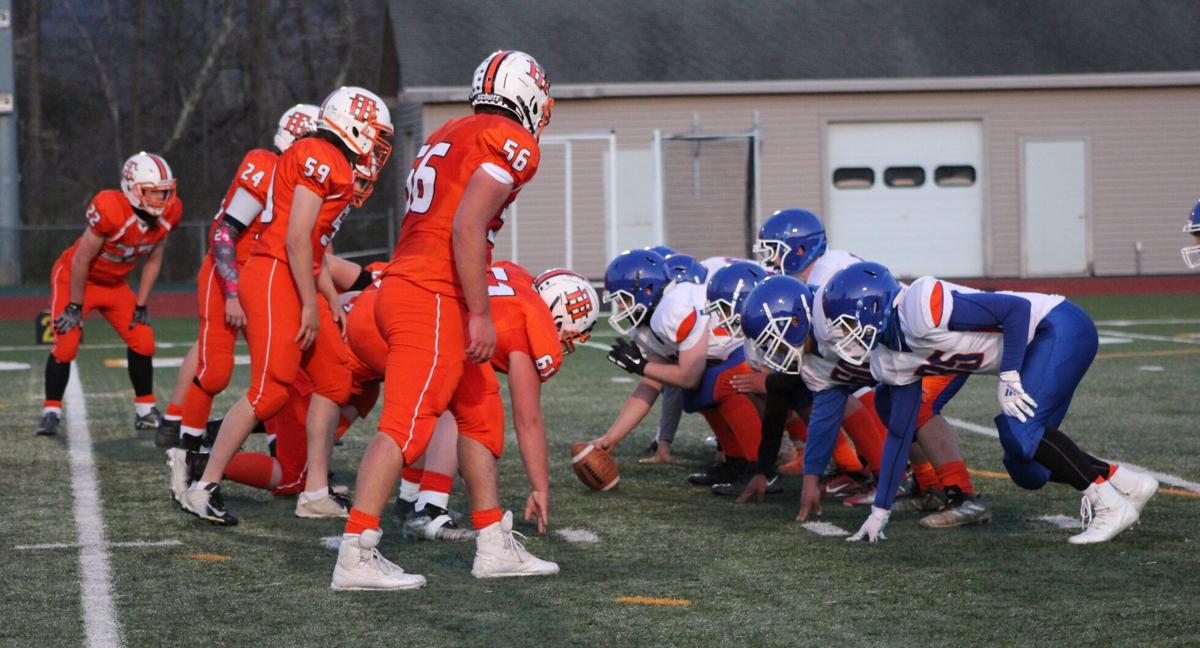 CRARYVILLE — The Catskill/Cairo-Durham Mustangs stopped a late rally by the Taconic Hills Titans on Friday night, and won on the road, 30-24.

The Mustangs will have a make-up game against Coxsackie-Athens next week and the Titans’ opponent for their final game next Friday has yet to be determined.

Within the first few minutes of the game, the Mustangs looked to be outmatched as far as their fundamentals were concerned, they flat out were not tackling properly.

At the 9:45 mark in the first quarter, Isaiah Hayden jumped the route on an out-pass from Titan quarterback Tyler Peck that was intended for Aaron Bonci, and took it 45 yards to the endzone for a Mustangs touchdown. Hayden was rewarded for his efforts and given a direct snap for the two point conversion as he ran across the goal line again.

The Mustangs led 8-0 and for a bulk of the period, neither side could efficiently move up and down the field. With under a minute to go in the quarter, Mustang quarterback James Maynard threw a swing pass toward the sidelines to his running back Gavin Ingrassia, who turned upfield and found a lane to run through and he was gone.

Ingrassia took the ball 74 yards down the field and into the endzone for the Mustangs touchdown, and teammate Markus Henry took the ball over the line for the two point conversion and extended the lead to 16-0.

With the ball back in the hands of their offense, Taconic Hills needed to start prolonging drives and getting points if they wanted to stay in it. A morale boost came in the form of a first down run by Bo Burns as he stiff-armed and spun away from multiple defenders to end the first quarter.

A few plays into the second period, the Titans broke the ice and scored on an eight yard touchdown run for Tyler Peck, and they converted the two point play on a pass from Peck to Charlie Beck in the endzone.

With the lead cut in half, the Mustangs’ offense looked to answer the quick score by the Titans. Catskill/Cairo-Durham got what they were looking for when Eddie Rogers took a hand-off all the way to the endzone for a 72 yard touchdown. After another successful two point conversion the Mustangs led 24-8 with 8:39 remaining in the first half.

Two forced fumbles by the Mustangs disrupted and disarmed the Titans’ hopes of scoring before halftime. With about a minute on the clock, Maynard connected on another swing pass to a running back, but it was Isaiah Hayden this time, and he took it into the endzone for another Mustangs touchdown.

The Mustangs were unsuccessful this time around on the two point attempt, but they widened their lead still, to 30-8 with under a minute on the clock.

With the Titans desperate to score before halftime, their drive at midfield was stifled yet again by another turnover. This time it was Mustang Cameron Lyles who came away with the interception of a pass from Tyler Peck. The Mustangs took a knee to run the clock to zero and get to halftime with that 30-8 lead still intact.

At the start of the third quarter, the Titans came out looking like a different team than they had been in the first half. The Taconic Hills defense had a fire lit underneath them as this second half got underway, and they forced a fumble of their own on a Mustangs fourth down play, and Charlie Beck recovered the fumble at the 50 yard line.

Bo Burns got the ball continuously in the 2nd half and almost couldn’t be stopped. He took the hand-off on a counter run to his left and got plenty for the first down. This set up a 21 yard touchdown pass from Peck to Beck a couple plays later, and Peck ran the ball in himself for a two point conversion.

The Titans cut the lead to 30-16 now at the 7:37 mark in the third period. After the Mustangs failed to move the ball on offense thanks to the Titans’ clutch defense, Taconic Hills took over on downs thanks to a failed trick play Catskill/Cairo-Durham attempted on fourth and long.

With two consecutive first down runs by Bo Burns ending the third quarter, the Titans were threatening at the Mustangs’ 15 yard line as the fourth quarter began.

On the first play of the fourth, Peck completed a pass to Dawson Cooper, who made a juggling catch in the endzone for a Titans touchdown, just seven seconds into the quarter. Chris Cortwright bounced it outside on the two point attempt, and caught the front right corner of the endzone to get the conversion and cut the lead to 30-24.

The Mustangs had the ball in a commanding position with 5:00 left in the game and at their opponents’ 43 yard line. James Maynard took the direct snap on a designed run and exploded for a 40 yard gain as he was tackled just two yards shy of a touchdown.

Thanks to penalties and unsuccessful attempts at yards, the Mustangs were faced with a fourth and goal at the 27 yard line. Tyler Peck made a huge play on defense this time, and swatted the ball out of the air for an incomplete pass and the Titans had life with under three minutes of game time left.

Peck completed a pass to Beck across the 50 yard line for a first down, and then kept the ball himself on a quarterback run for another first down. Taconic Hills called their second timeout to stop the clock at 1:51.

To make things complicated, Peck was sacked on the next play, so the clock continued to run. Before they could line up for fourth down, the Mustangs used their final timeout with 0:46 on the clock, to draw something up for the defense to stop the Titans and force a turnover. On their last hope to keep the drive alive, Tyler Peck scrambled to bide time for his receiver to get open.

Peck could not have thrown a more perfect football, just over and past the leaping defender and right into his receiver’s hands. However, Titans halfback Troy Super had the ball bounce right off of his hands and hit the ground for an incompletion, and the comeback for Taconic Hills was over just like that.

The Mustangs took over on downs and Maynard took one final knee to run out the clock as the Titans neglected to use their final timeout, and Catskill/Cairo-Durham won a hard-fought game at Taconic Hills, despite not scoring once in the second half.

Peck completed 12 or 24 passes for 157 with two touchdowns and two interceptions for the Titans. Charlie Beck had four receptions for 98 ayrds and a TD.