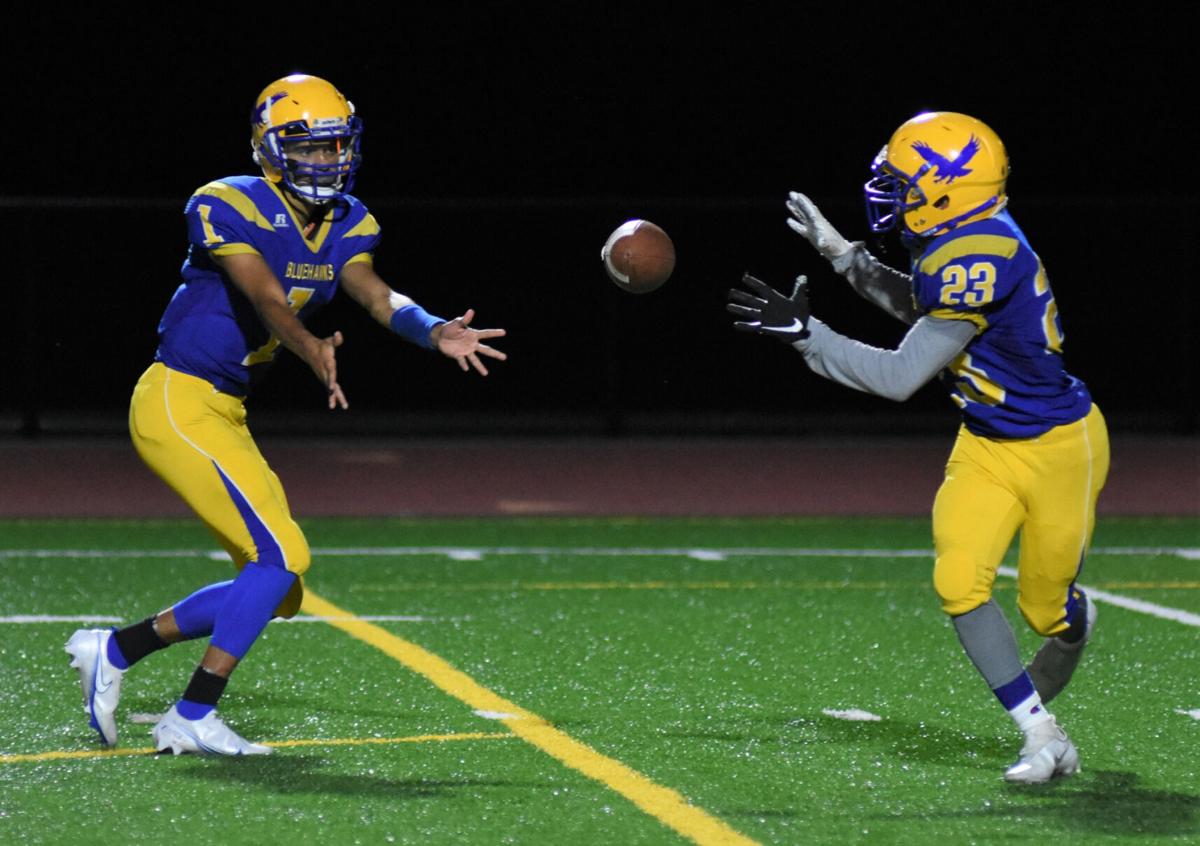 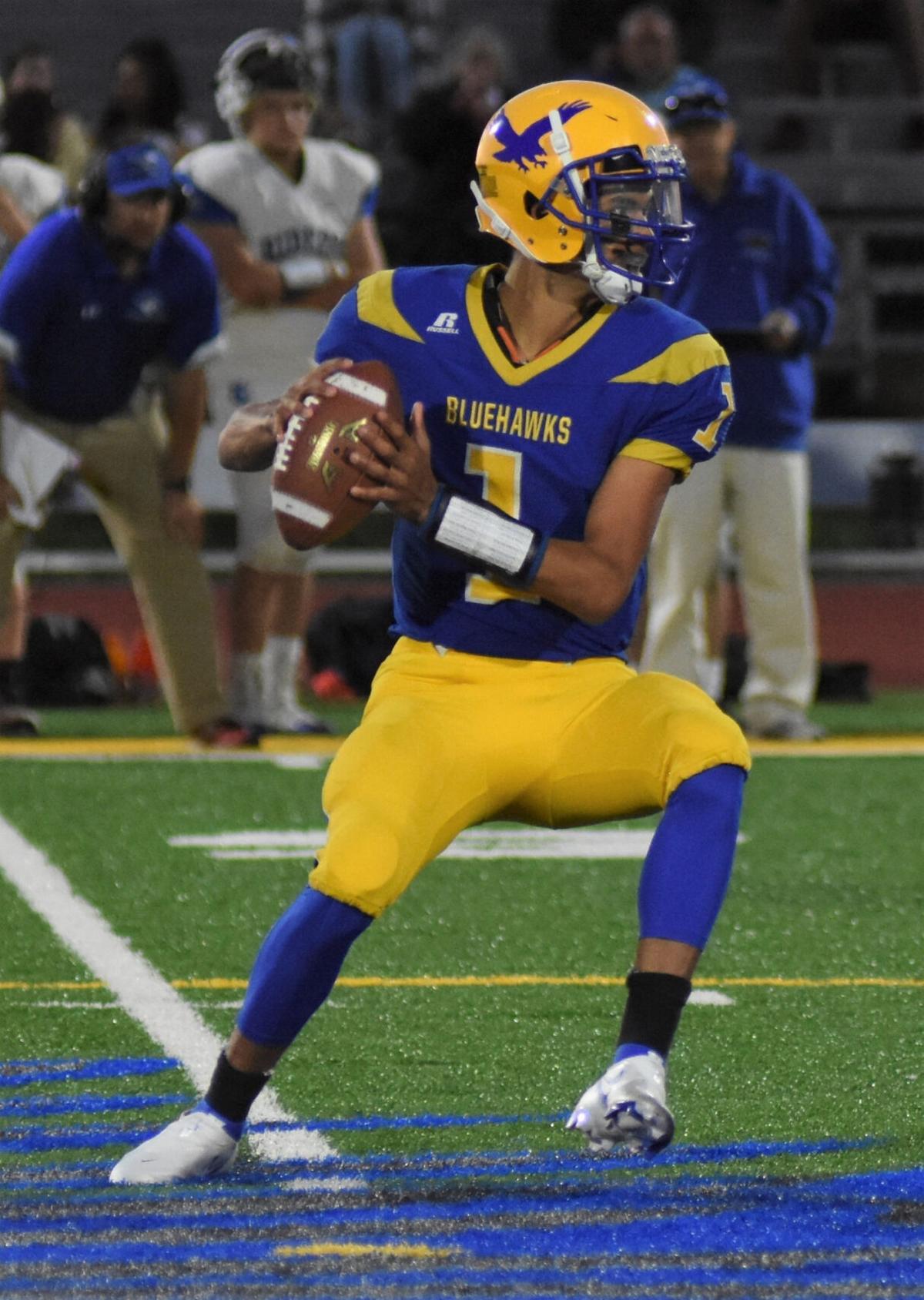 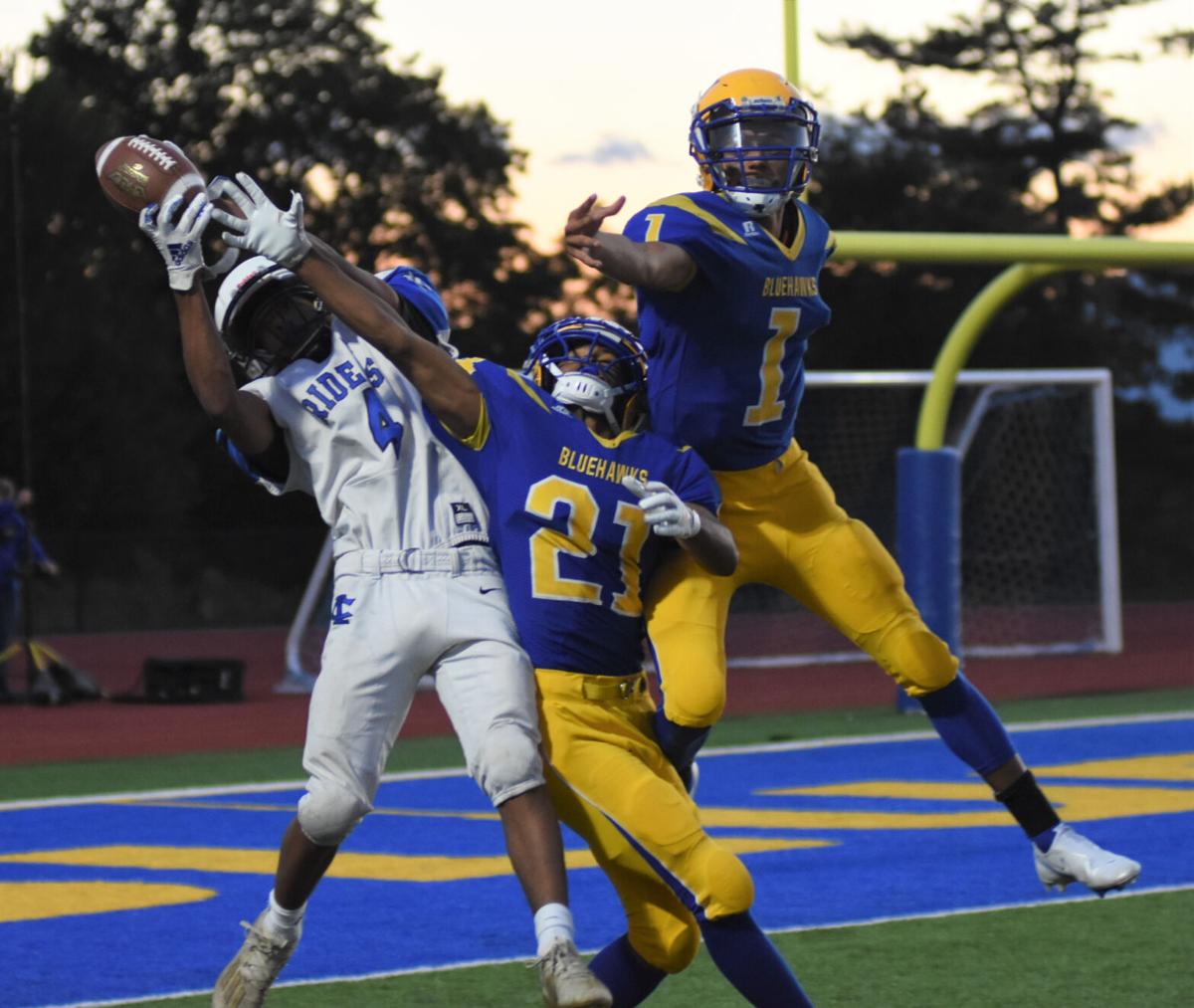 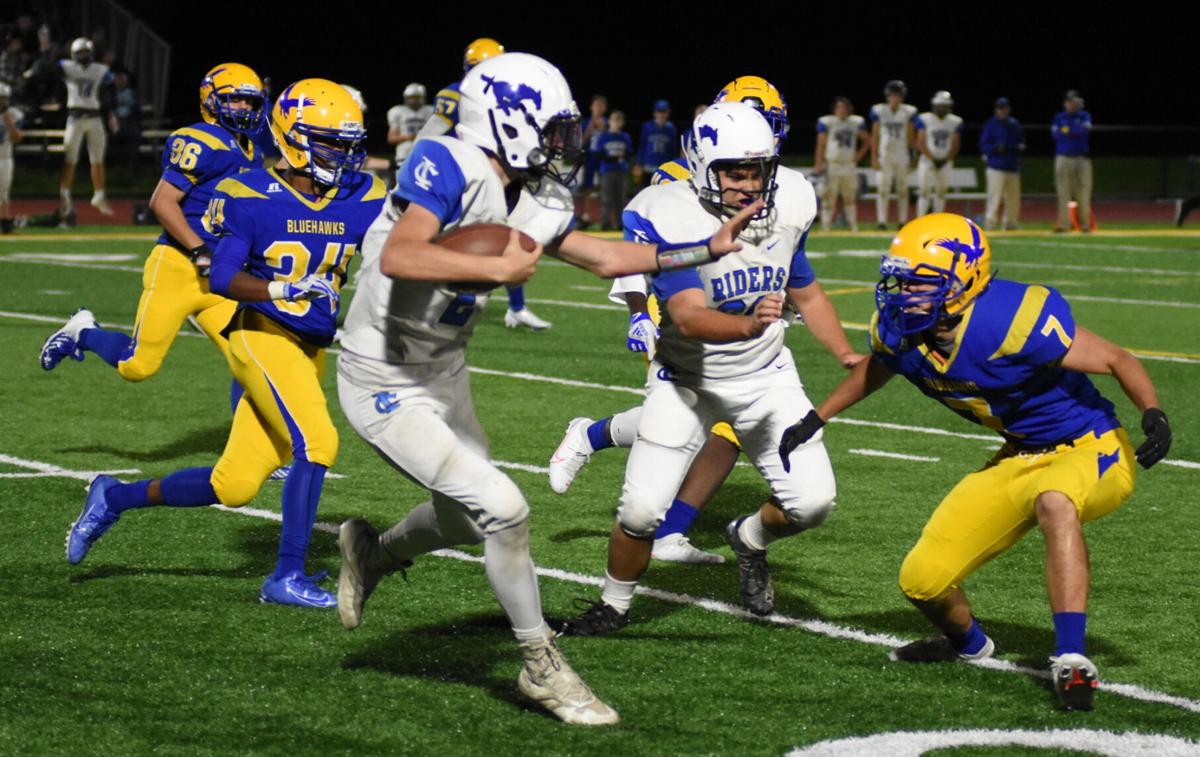 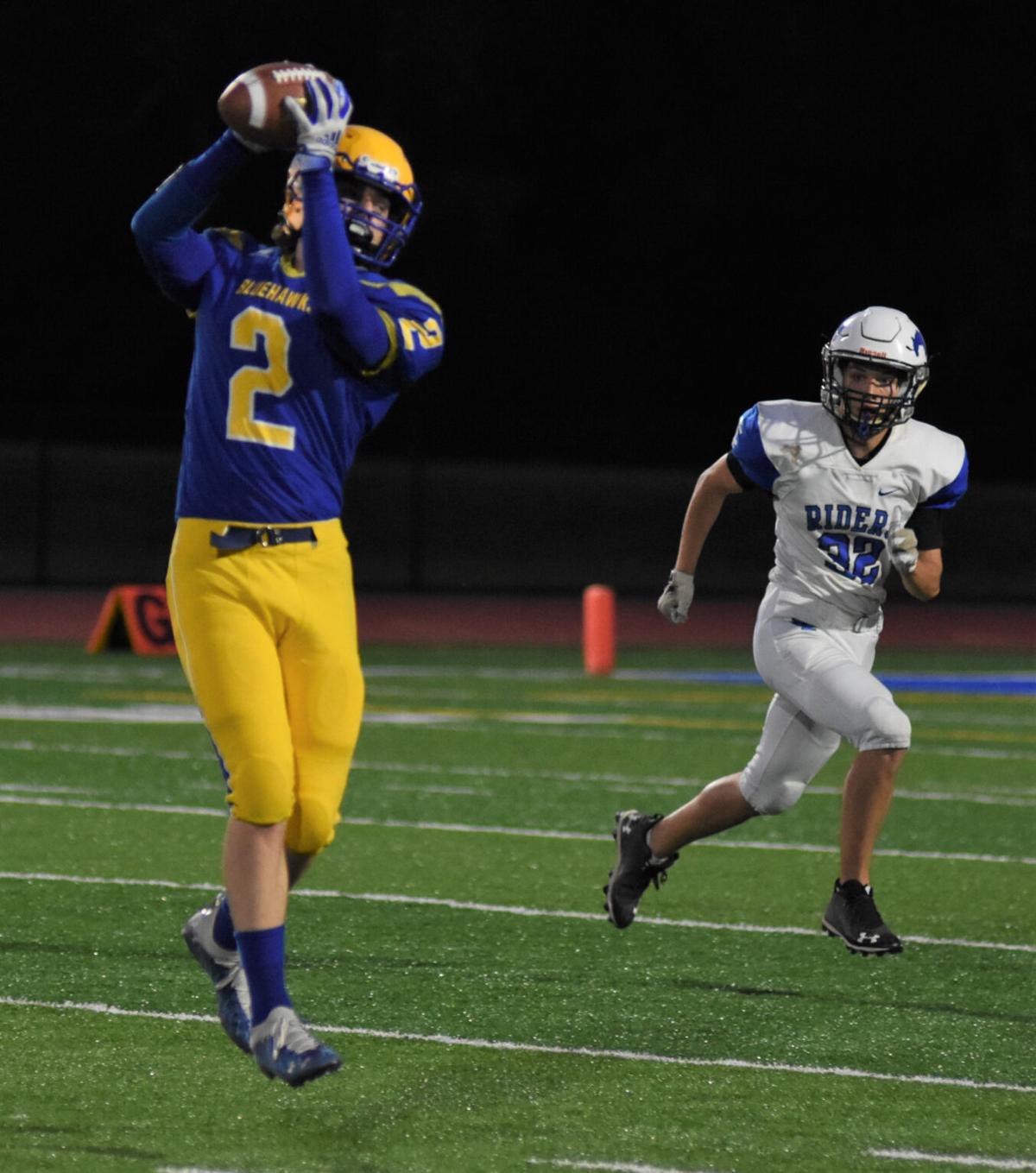 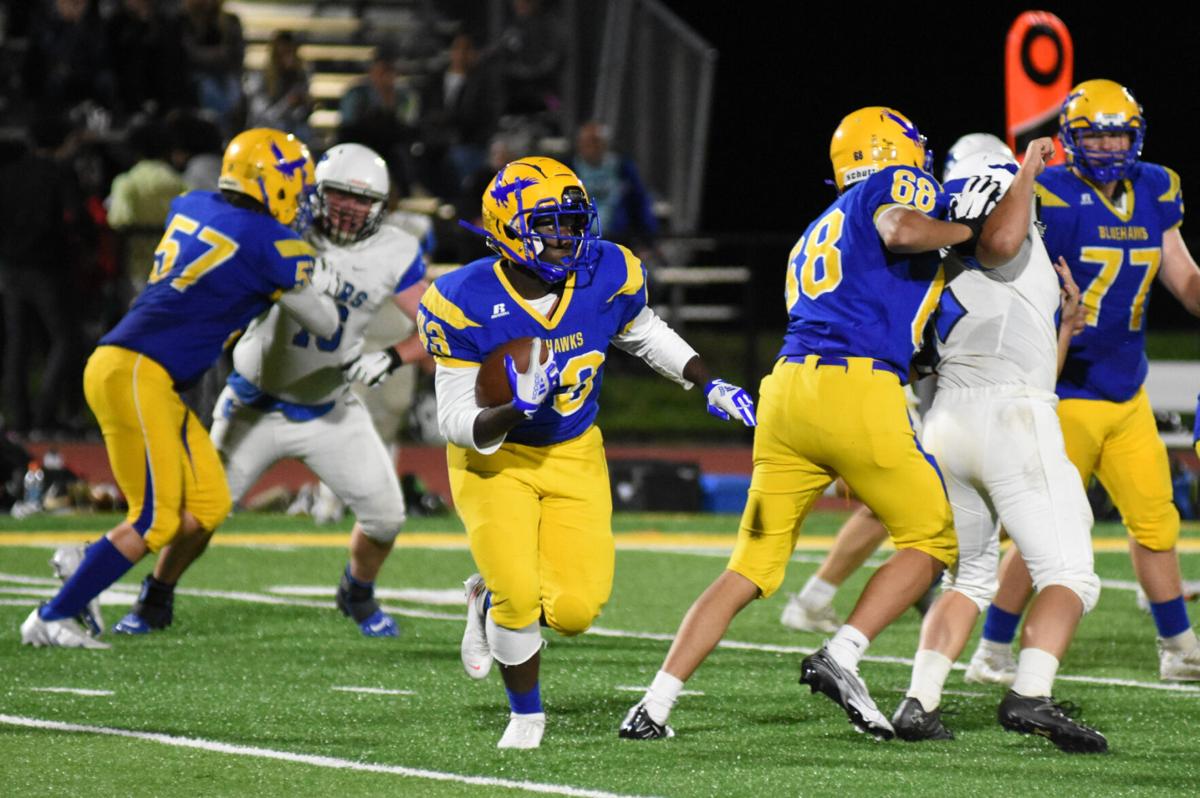 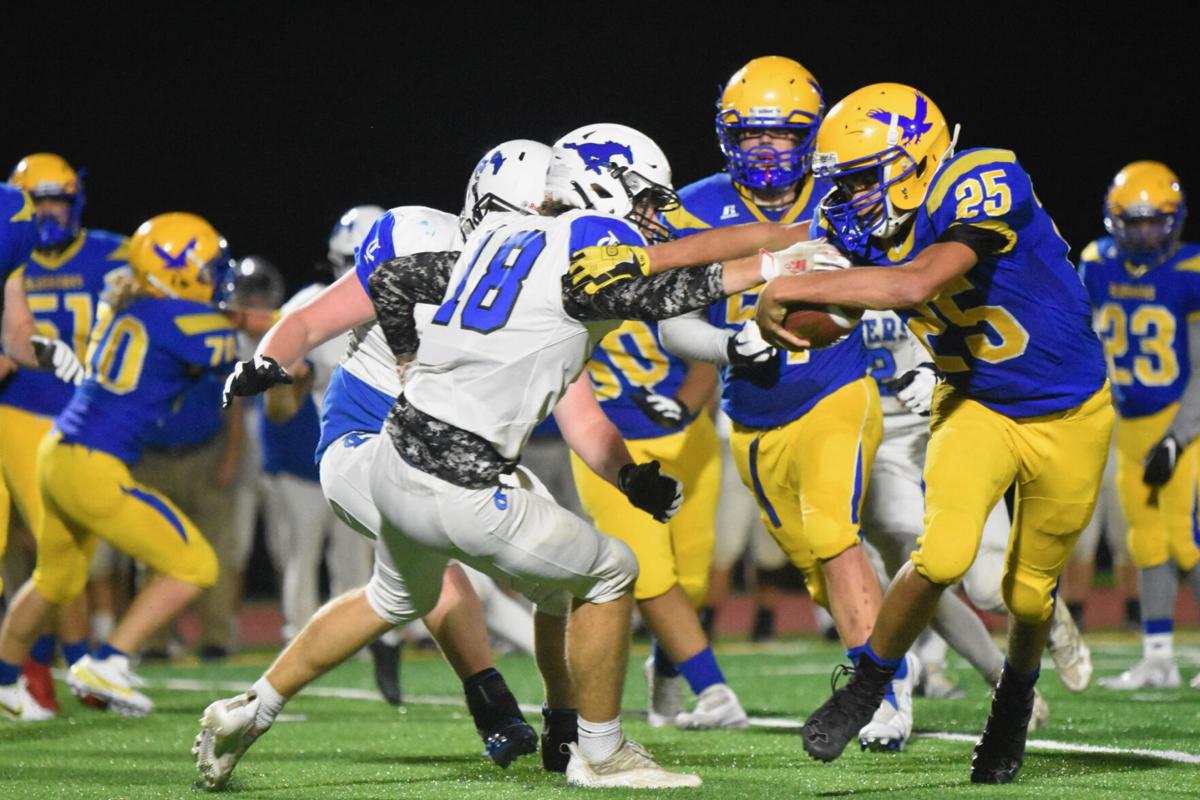 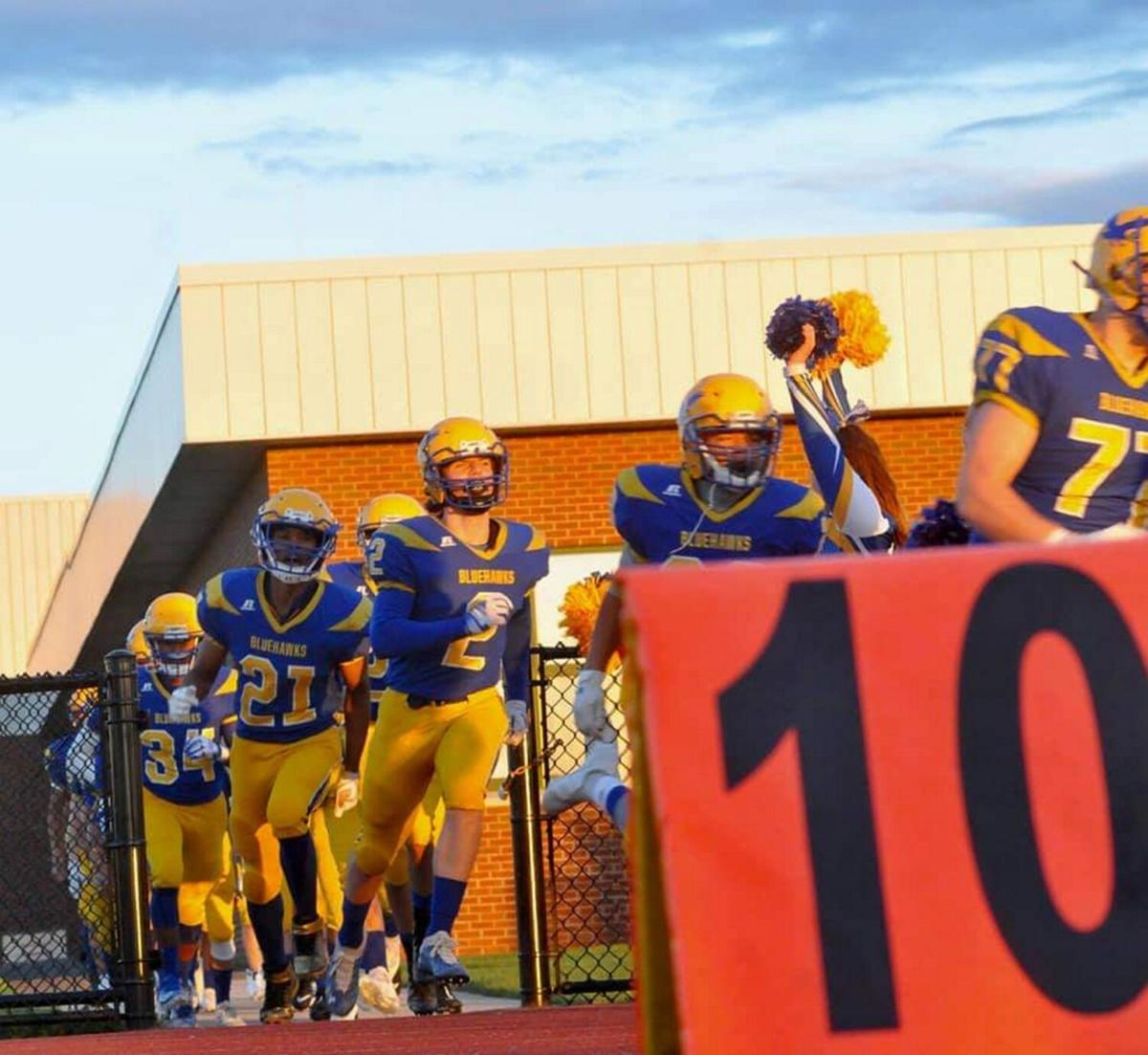 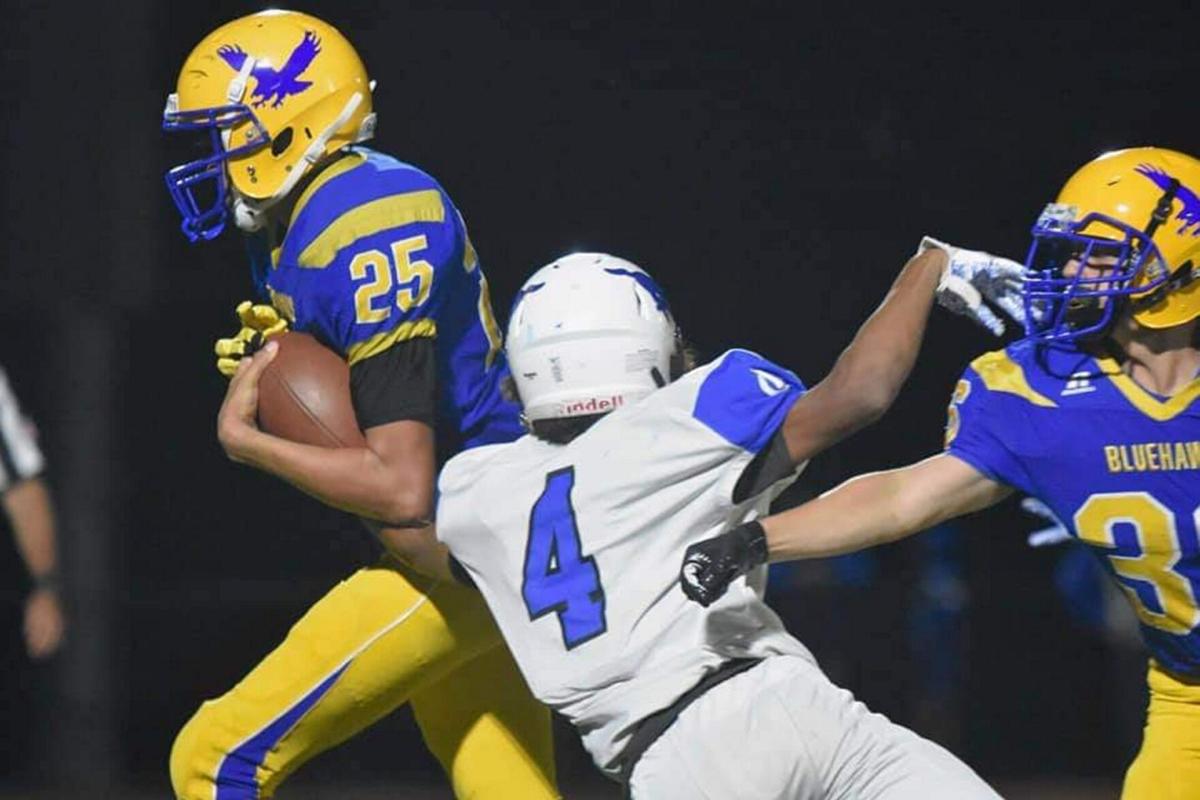 HUDSON — Isaiah Maines accounted for five touchdowns in his debut as Hudson’s starting quarterback and teammate Jeremiah Wilburn topped the 100-yard rushing mark as the Bluehawks defeated Ichabod Crane, 40-7, in the Class C South Division opener for both schools on Friday at Hudson High School.

Maines, who took over the starting quarterback position when incumbent starter Caleb Romano moved to Florida, ran for two scores and passed for three more. He finished with 9 completions in 17 attempts for 156 yards and one interception.

“Very sharp,” Hudson head coach John Davi said of Maines. “I’m happy with the way things are progressing and I think Isaiah is going to have a heck of a year. He’s an athlete and he’s hard to contend with when he gets moving.

“When he’s in space he’s trouble for anybody. He is learning to be the leader of the offense. What Caleb was to this team was a true leader and Isaiah is quickly becoming our leader.”

Ichabod Crane, which has now lost eight staight to Hudson, kept it close into the second quarter, before the Bluehawks erupted for four scores before halftime.

“We started out a little sloppy, then things started to fire on all cylinders and I think we played very well,” Davi said. “We still have a lot of work to do. It’s a good win, any win is a good win, but we still have things to work on.”

The Riders got on the board first with five minutes remaining in the opening quarter when Joe Penzabene hooked up with Zion Evans for a 23-yard touchdown pass on a fourth down play.

Evans made a tremendous leaping catch between two Hudson defenders at the five yard line, then dove into the end zone for the score. Abigail Dolge tacked on the extra point to put the Riders up, 7-0.

Hudson came right back, putting together an impressive 12-play, 68-yard march that was capped off with a five-yard touchdown run by Maines with 11:14 to go in the second quarter. Emran Malik’s PAT kick evened the score at 7-7.

Later in the quarter, Hudson’s Deandre Smith intercepted a Joe Penzabene pass at the Bluehawks 14. On the next play, Wilburn busted off tackle and raced 83 yards before he was taken down at the Riders three. Maines took it in on the next play to put Hudson on top for good.

The Riders went three and out on their next possession and the Bluehawks offense went right back to work, moving 50 yards in six plays for their third score of the quarter.

Maines threw a 19-yard touchdown pass to Brian Curran to wrap up the drive, which was kept alive by a 16-yard completion from Maines to Smith on a fourth and 10 play. Hunter Degraff passed to Kristyain Clarke for the two-point converion, which put the Bluehawks up, 22-7 with 2:43 still to play before halftime.

Another turnover deep in Hudson territory on Ichabod Crane’s next possession, gave the Bluehawks a first down on the Riders 18. Three plays later Maines found Wilburn for a 31-yard touchdown strike to make it a 28-7 game at the intermission.

Hudson added two more scores in the second half on a 24-yard touchdown pass from Maines to Wilburn and a 75-yard interception return by Curran.

Davi was especially pleased with how his team responded after falling to Schuylerville in a Week 0 game.

“We’re moving the ball better and everyone is more focused,” Davi said. “Another week of practice gives us another week of experience to learn what we’re doing, but we’re on the right track for sure.”

Curran topped the Bluehawks’ receiving corps with four catches for 59 yards and a touchdown.

“He worked real hard the entire gap between spring and now,” Davi said. “He’s focused and he said he’s going to be better and he for sure is better.”

Curran, Smith and Degraff each had an interception.

Penzabene completed 8 of 23 passes for 84 yards with a touchdown and three interceptions for the Riders.

Evans rushed for 53 yards on 14 carries and had two receptions for 29 yards and a TD. Connor Ackerly rushed for 43 yards on nine carries.

Penzebene led the Riders defense with eight tackles. Ryan Putnam had six tackles and Connor Booth had five tackles and one interception.