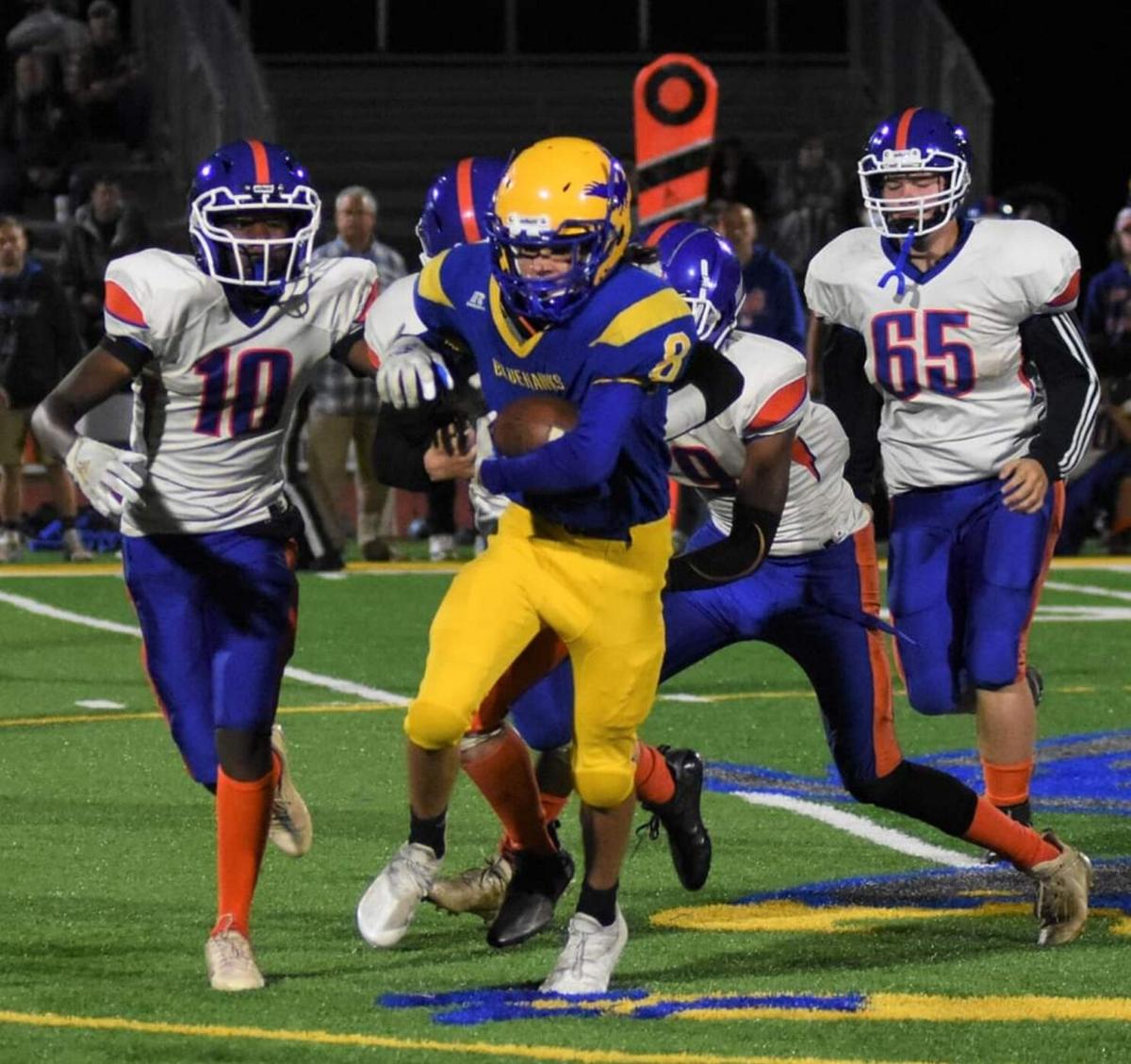 Tim Martin/Columbia-Greene Media Hudson’s Jordan Moon (8) returns a punt during this past Friday’s game against Catskill/Cairo-Durham. 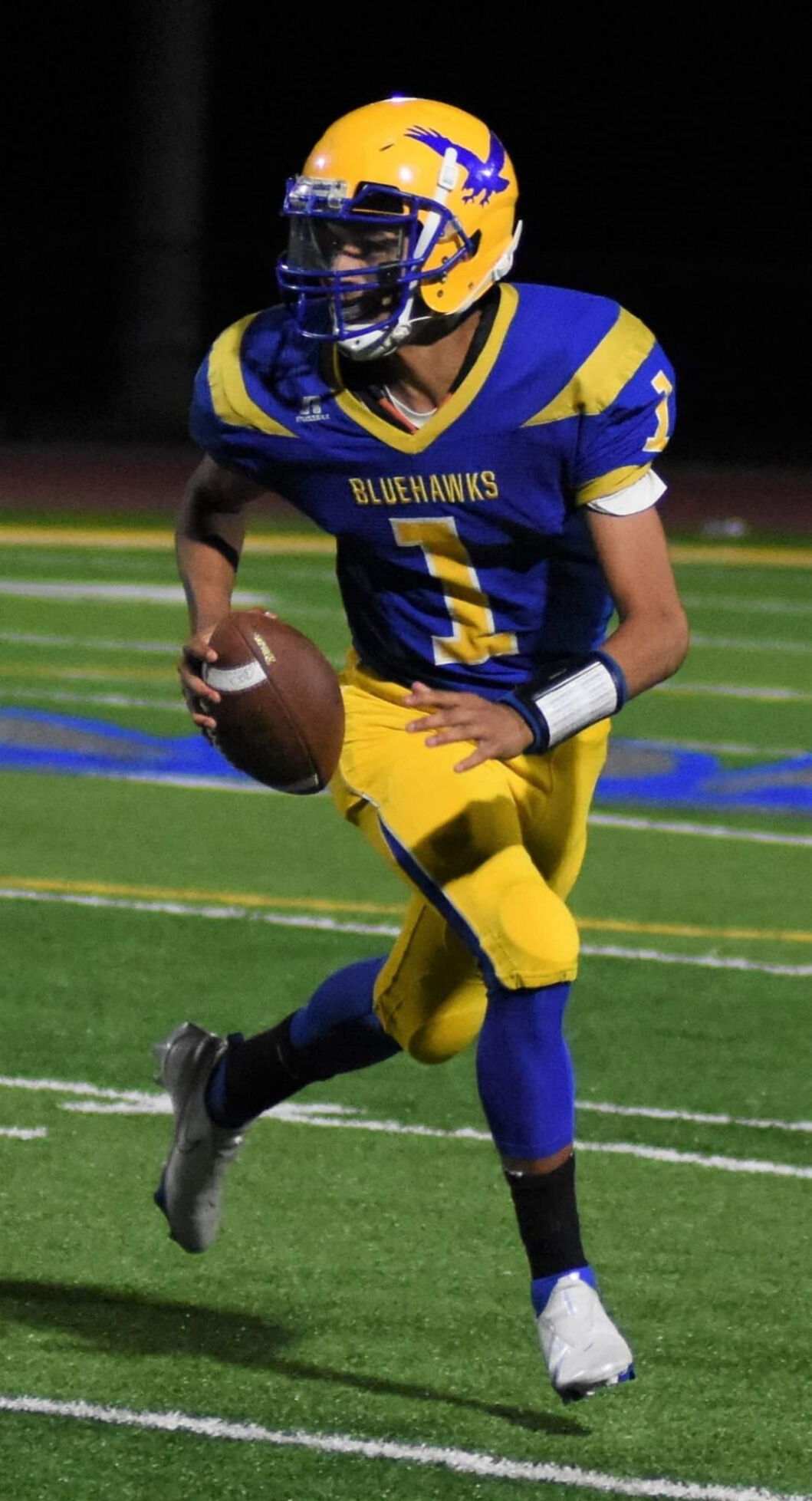 Tim Martin/Columbia-Greene Media Hudson quarterback Isiah Maines rolls out of the pocket during this past Friday’s game against Catskill/Cairo-Durham.

Tim Martin/Columbia-Greene Media Hudson’s Jordan Moon (8) returns a punt during this past Friday’s game against Catskill/Cairo-Durham.

Tim Martin/Columbia-Greene Media Hudson quarterback Isiah Maines rolls out of the pocket during this past Friday’s game against Catskill/Cairo-Durham.

HUDSON — First place in the Class C South Division will be on the line when Hudson travels to Voorheesville on Saturday at 1 p.m.

Hudson comes into the game unbeaten in four regular season games, having outscored their opponents, 201-13. Voorheesville is currently riding a three-game winning streak after opening the season with a 28-22 overtime loss to Watervliet.

The Bluehawks, who gained honorable mention status for the fourth straight week in the latest New York Sportswriters Association Class C rankings, will be without their top two running backs, Jeremiah Wilburn and Deandre Smith, who were banged up in last week’s win over Catskill/Cairo-Durham. Wilburn is averaging 18 yards per carry with 376 yards and four touchdowns on 21 carries, while Smith has 225 yards and three touchdowns on 21 carries.

Hudson head coach John Davi admits his team will miss Wilburn and Smith’s production on both sides of the ball, but is confident their teammates will pick up the slack.

Quarterback Isaiah Maines is equally dangerous running and throwing the ball, rushing for 204 yards and four touchdowns on 32 carries, while completing 15 of 25 passes for 300 yards and seven touchdowns with just one interception.

Kendrick Clarke has stood out when seeing action in the backfield, rushing for 197 yards and two touchdowns on just 10 carries. Kristyain Clarke has 127 yards on 10 carries and Jordan Moon has picked up 114 yards and on eight carries. Brian Curran has developed into Maines’ go-to target, snagging seven receptions for 142 yards and three touchdowns.

The Hudson defense had it’s run of quarters without allowing a point snapped at 12 last week, but has surrendered just two touchdowns in four regular season games.

Senior Jake Hromada leads the team in tackles with 24. Curran has 22 tackles and Alwyn Lewis has 20. Kristyain Clarke has four quarterback sacks, while Curran and Hromada both have two. Hunter DeGraff has picked off two passes. Since it’s season-opening loss to Watervliet, Voorheesville has been impressive, rolling to victories over Catskill/Cairo-Durham (46-12), Rensselaer (48-0) and Ichabod Crane (43-7).

Running back Joe Tomlin has been the team’s top offensive threat, rushing for 248 yards and four touchdowns in the Week 2 win over Catskill/Cairo-Durham.

”Voorheesville is a good team,” Davi said. “The QB is a good athlete and pretty accurate passing. They are big up front as well. Our guys are playing pretty good these last few weeks. Our run game is definitely improved and our offensive line has really come together.

“Isaiah Maines continues to improve each week and is a threat to run or pass on every down. We will be without Jeremiah Wilburn and Deandre Smith this week due to injuries, but we have guys who will have to step up in their spots. All in all, it should be a great game!”

CRARYVILLE — Taconic Hills hopes to celebrate its Homecoming by officially wrapping up a berth in the upcoming Section II Class C playoffs with a win over Catskill/Cairo-Durham on Friday.

The Titans are coming off a 60-0 victory over Coxsackie-Athens, a game in which Landon Halsted accounted for five touchdowns while stepping in for injured starting quarterback Tyler Peck.

“The kid’s always had an arm and he has a nice, beautiful release,” Taconic Hills coach Mark Anderson said. “Basically, I told him ‘this is all you kid. I believe in you.”

Anderson’s belief in his junior quarterback paid off as Halsted completed all seven of his passes, three going for touchdowns. He also ran for a touchdown and returned a punt 65 yards for another score.

Catskill/Cairo-Durham is still looking for its first win, but coach Anderson isn’t taking the Mustangs lightly.

”Our focus right now is to beat a scrappy Catskill/Cairo-Durham team that has some weapons that can hurt you,” Anderson said. “Homecoming is always a distraction, but we’re trying to keep our kids focused on the task at hand, trying to get some momentum going into the last two games of the year.”

CHATHAM — Chatham will look to even its record at 2-2 when it hosts Canajoharie on Friday at 7 p.m. in its annual Homecoming game.

Chatham lost a 42-14 decision to Stillwater on the road this past week and is looking to atone for the setback.

Panthers quarterback Tyler Kneller ran for 100 yards and a touchdown and passed for 119 yards in the loss to Stillwater. Mike Pierro had a big game on defense, coming up with 13 tackles.

“Overall we are as healthy as we have been since preseason,” Chatham coach Shawn Caldwell said. “We were out two starters last week which with a small roster is tough to overcome but we will have everyone back for the first time this season which will be nice.

“Last week we missed some opportunities offensively and we did not play well defensively. We played most of the game on our heels and they took advantage. We worked on those things this week and plan on putting a better defensive effort against Canajoharie.”

“Canajoharie is coming off a convincing win last week,” Caldwell said. “They are fairly balanced offensively. Our secondary needs to be on its toes and our front seven need to fill their gaps against the run. Offensively we need to continue to clean up some of the little mistakes and make sure we do not put the ball on the ground.

“This is a big game for our division. Winner will be in a good position to earn the No. 2 seed from the south division and a trip to the semifinals.”

RENSSELAER — Ichabod Crane hits the road on Friday night to play a Rensselaer team that has yet to score a point this season.

The Rams have combined with Loudonville Christian for football and have struggled through the first four games, falling to Taconic Hills (34-0), Hudson (50-0), Voorheesville (48-0) and Watervliet (46-0).

After beating Cohoes, 36-6, in a preseason game, Ichabod Crane opened the regular season on the short end of a 40-7 score against Hudson, but then won two straight, beating Coxsackie-Athens (49-0) and Taconic Hills (30-6). The Riders lost to Voorheesville, 43-7, this past Friday night.

The Cannoneers are coming off a 46-0 victory over Rensselaer and have scored less than 40 points just once through five games.