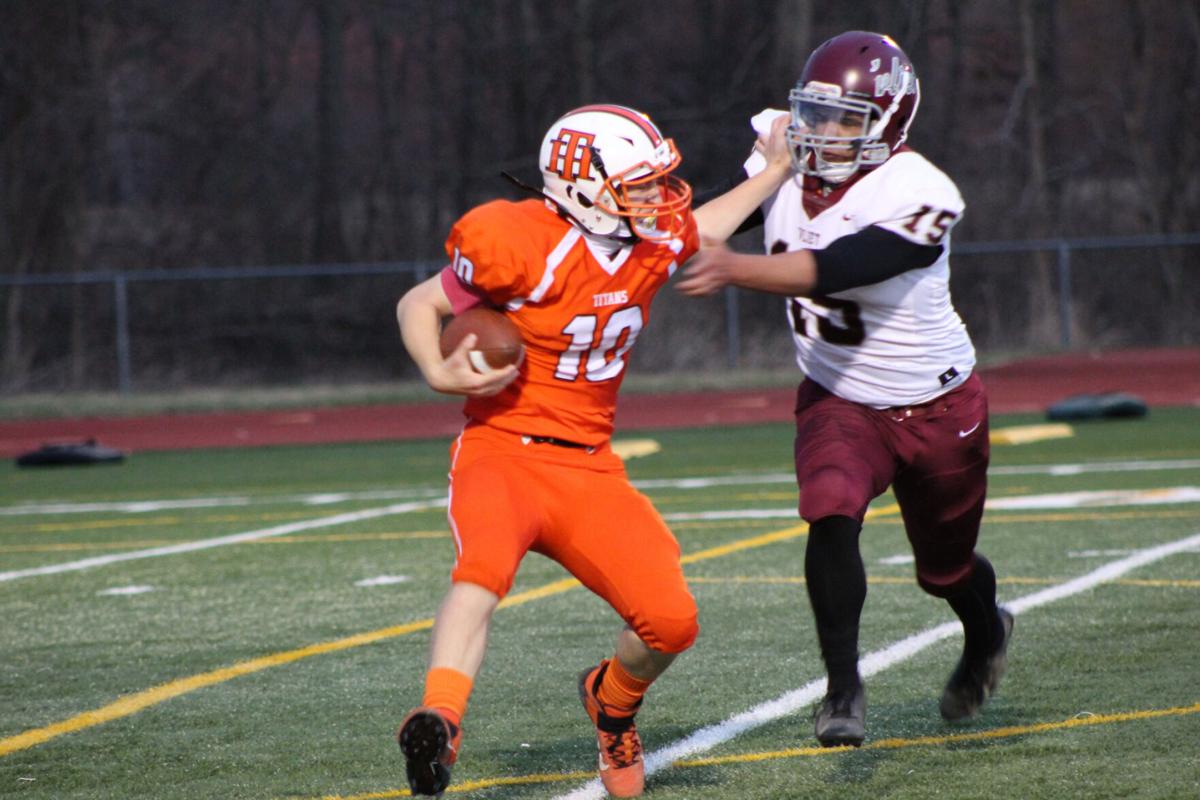 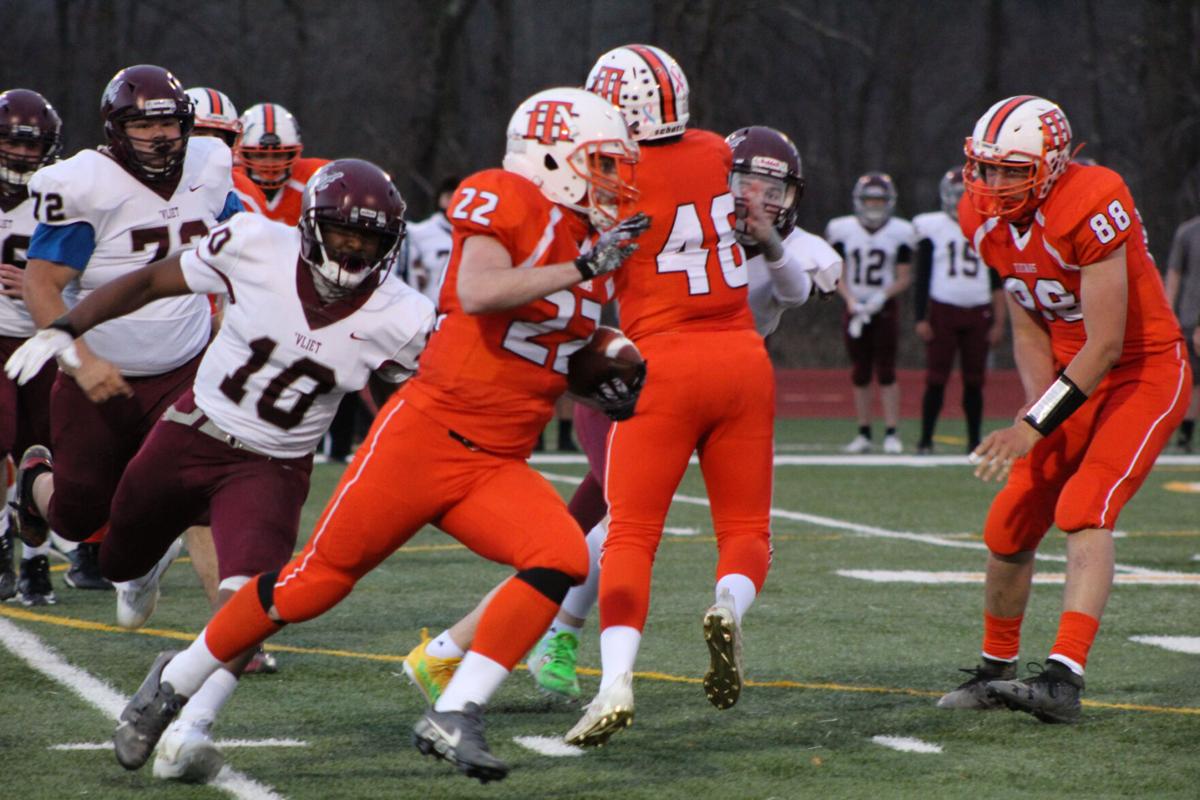 The Cannoneers were firing on all cylinders from the opening kickoff, and that made it exceedingly difficult for the Titans to put together any offense. Titans’ quarterback Tyler Peck completed 17 of 31 passes for 140 yards, with two touchdowns and three interceptions.

Peck also led the Titans in rushing with 46 yards and one rushing touchdown. Both touchdown passes for Peck went to Charlie Beck who led Taconic Hills with 87 receiving yards on five catches.

In the first few minutes of the game, the Titans had given the Cannoneers the ball multiple times on an interception and a number of turnovers on downs.

Watervliet would capitalize on their opponents’ errors, and go up 16-0 by the end of the first. The second period was more of the same for the Titans, as they could not build any momentum on offense to give their defense a rest.

Before long, Taconic Hills was down 36-0, but a touchdown pass from Tyler Peck to Charlie Beck near the end of the half looked to inject life into the Titans.

Taconic Hills played with a better sense of urgency to start the third quarter and were driving inside the red zone with just over four minutes to go in the period. Chris Cortwright scored a rushing touchdown for the Titans with 3:27 remaining in the third, and they converted a two point play to cut the Watervliet lead to 36-14.

The Titans tried their best to get their legs underneath them and make stops, but the Cannoneers outmatched them on offense and just had to play mistake free and coast the rest of the way.

To begin the fourth quarter, the Titans made a huge stop on fourth down for the Cannoneers. The Titans’ offense would score a touchdown on the very next play, but it was getting too late in the game for them to mount a comeback.

Watervliet sealed Taconic Hills’ fate later in the fourth quarter, thanks to a pair rushing touchdowns, including one on fourth down by Nyheem Pinckney.

RAVENA — Isaiah Maines showed off his versatility on Friday night, scoring three touchdowns to power Hudson to a 37-8 victory over Ravena in a Section II Class B Reinfurt Division game at Ravena High School.

Maines scored on a 10-yard run, threw a 42-yard TD pass to Chris Romano and returned a kickoff 98 yards for a touchdown as the Bluehawks earned their second straight victory.

Maines finished with 26 yards rushing on seven carries, had three receptions for 61 yards and completed his only passing attempt for a 42-yard TD.

Romano completed 9 of 16 passes for 153 yards and a score and rushed for 29 yards on five carries and a touchdown.

Green led Hudson’s rushing attack with 86 yards and a TD on 15 carries.

Haigh, Alexander, Hromada and Curran each had a sack.

Hudson returns home to play Lansingburgh on Friday at 6 p.m.

Craig also had one reception for 17 yards as the Riders evened their record at 2-2.

Quarterback Joe Penzabene completed 6 of 11 passes for 39 yards. Connor Booth had one reception for 25 yards.

Ichabod Crane goes to Watervliet on Friday at 7 p.m., while Catskill/Cairo-Durham hosts Hoosick Falls/Tamarac on Saturday at 1 p.m.

CHATHAM — Greenwich raced to a 20-point lead by halftime and went on to defeat Chatham, 35-16, in Sunday’s Class D football game at Chatham High School.

The Witches led 14-0 after one quarter, 28-8 at halftime and outscored Chatham, 8-7 in the second half to ice the victory.

Chatham’s lone touchdowns were scored by Jacob Sorros on a five-yard run in the second quarter and a 65-yard pass from Tyler Kneller to Konur Barlow in the final quarter. Kyle Jackson and Kneller each ran in a two-point conversion.

Noah Hutchinson had 36 yards on two carries to lead the Panthers on the ground. Kneller added 24 yards on six carries.

Chatham travels to Cohoes on Saturday at 1 p.m.