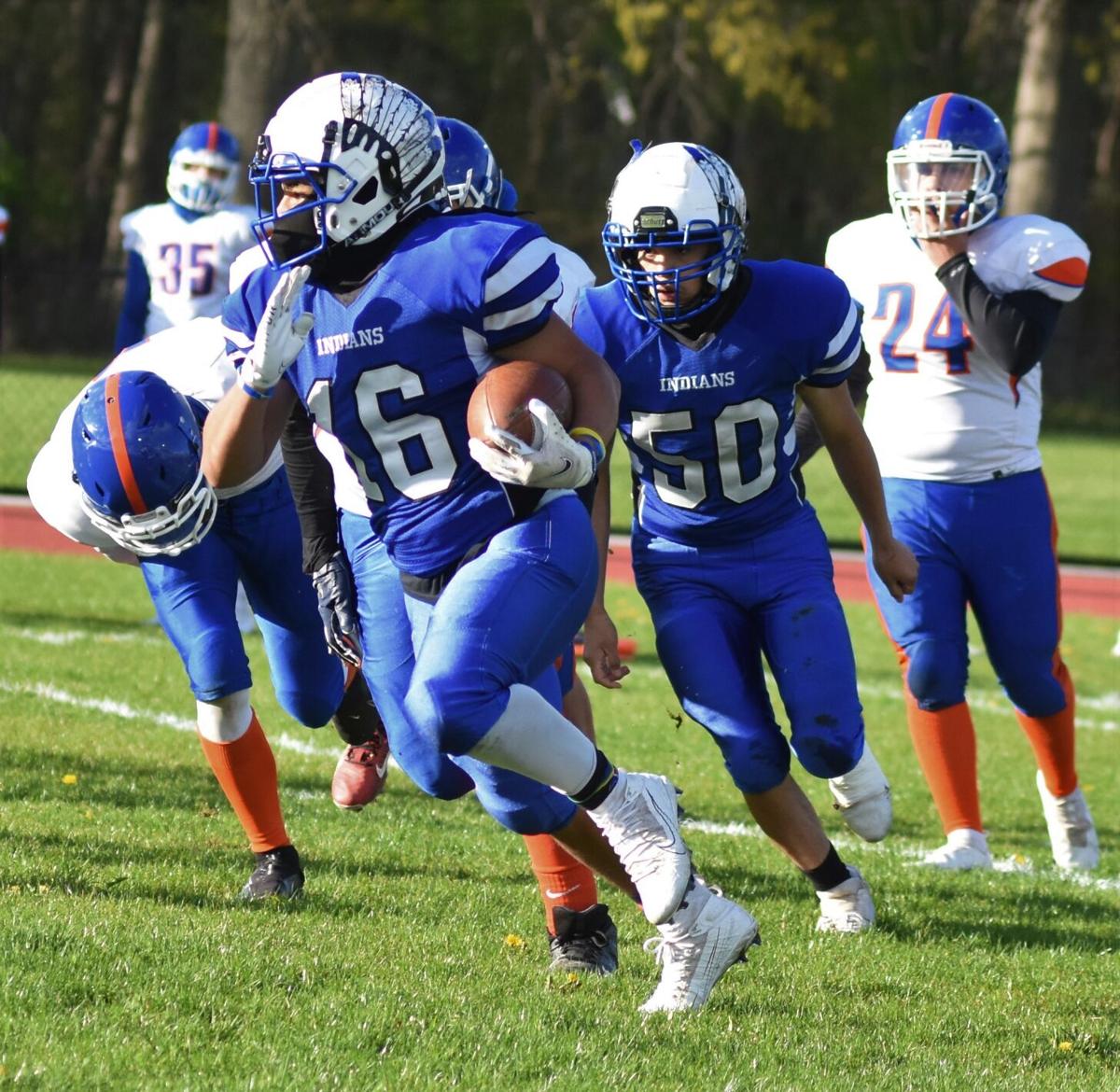 Coxsackie-Athens' Berno Carey (16) carries the ball during the first half of Friday's game against Catskill/Cairo-Durham at Coxsackie-Athens High School. 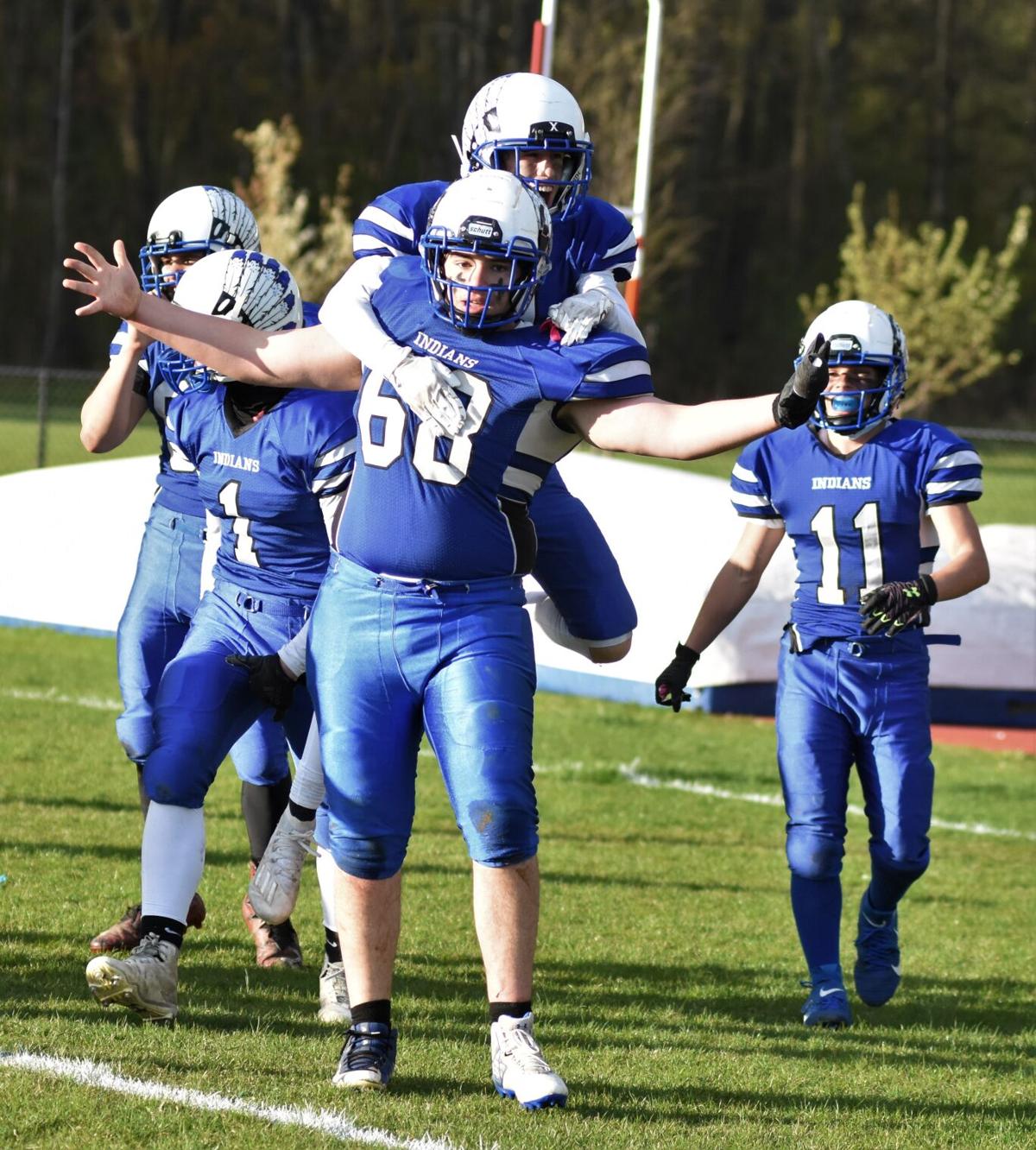 Coxsackie-Athens' Jesse Pickett (68) and teammates celebrate Pickett's touchdown in the first half of Friday's game against Catskill Cairo-Durham at Coxsackie-Athens High School. 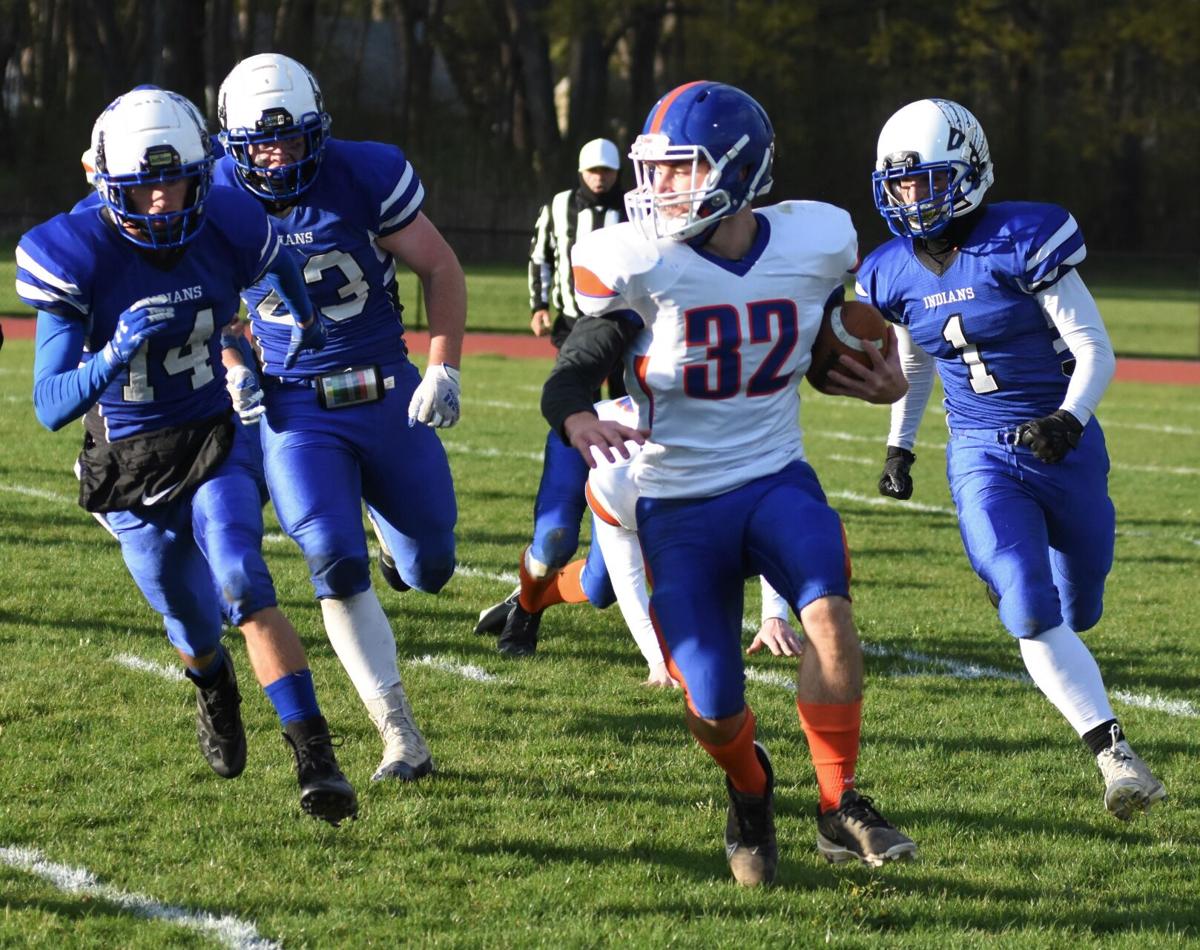 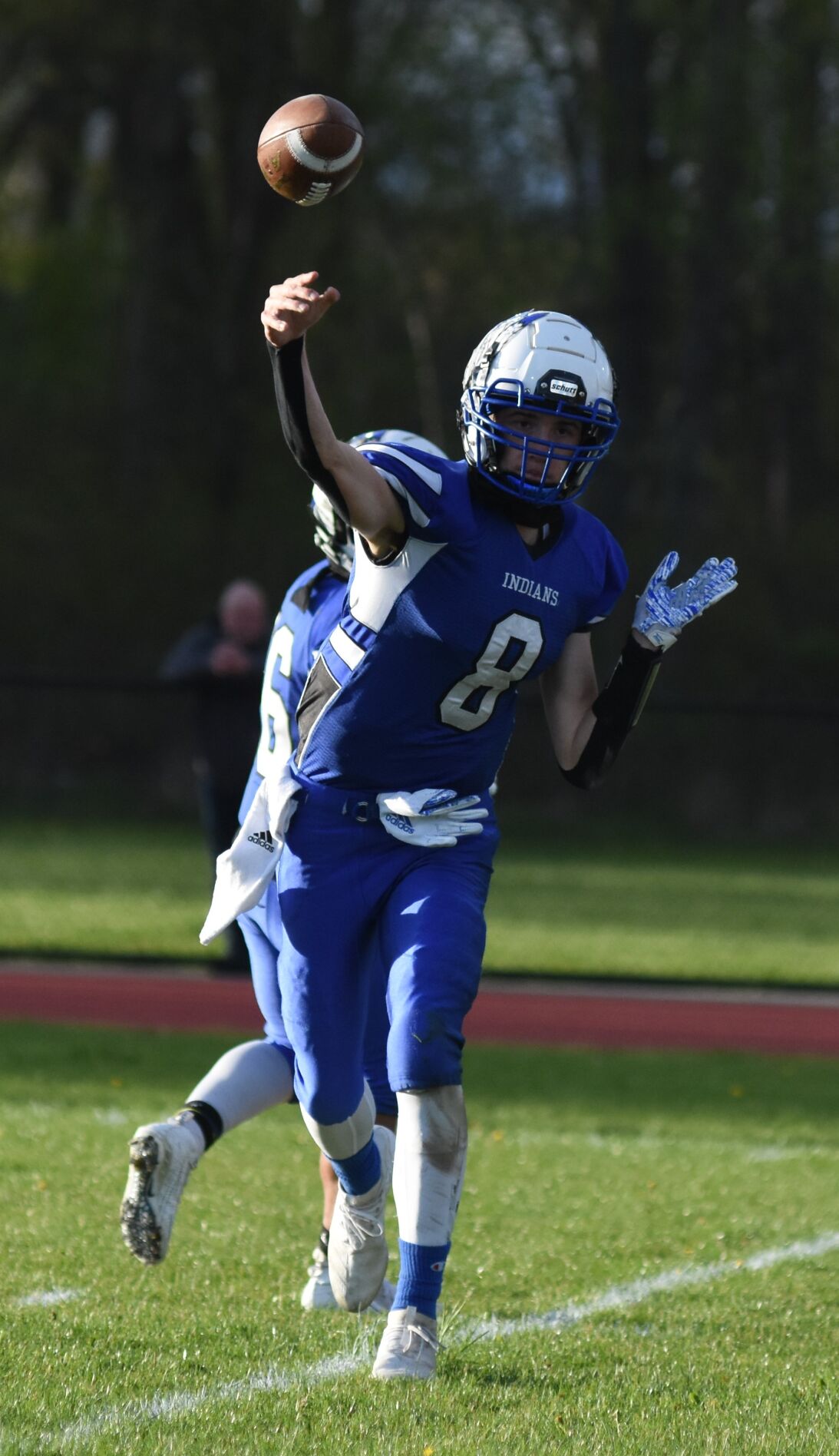 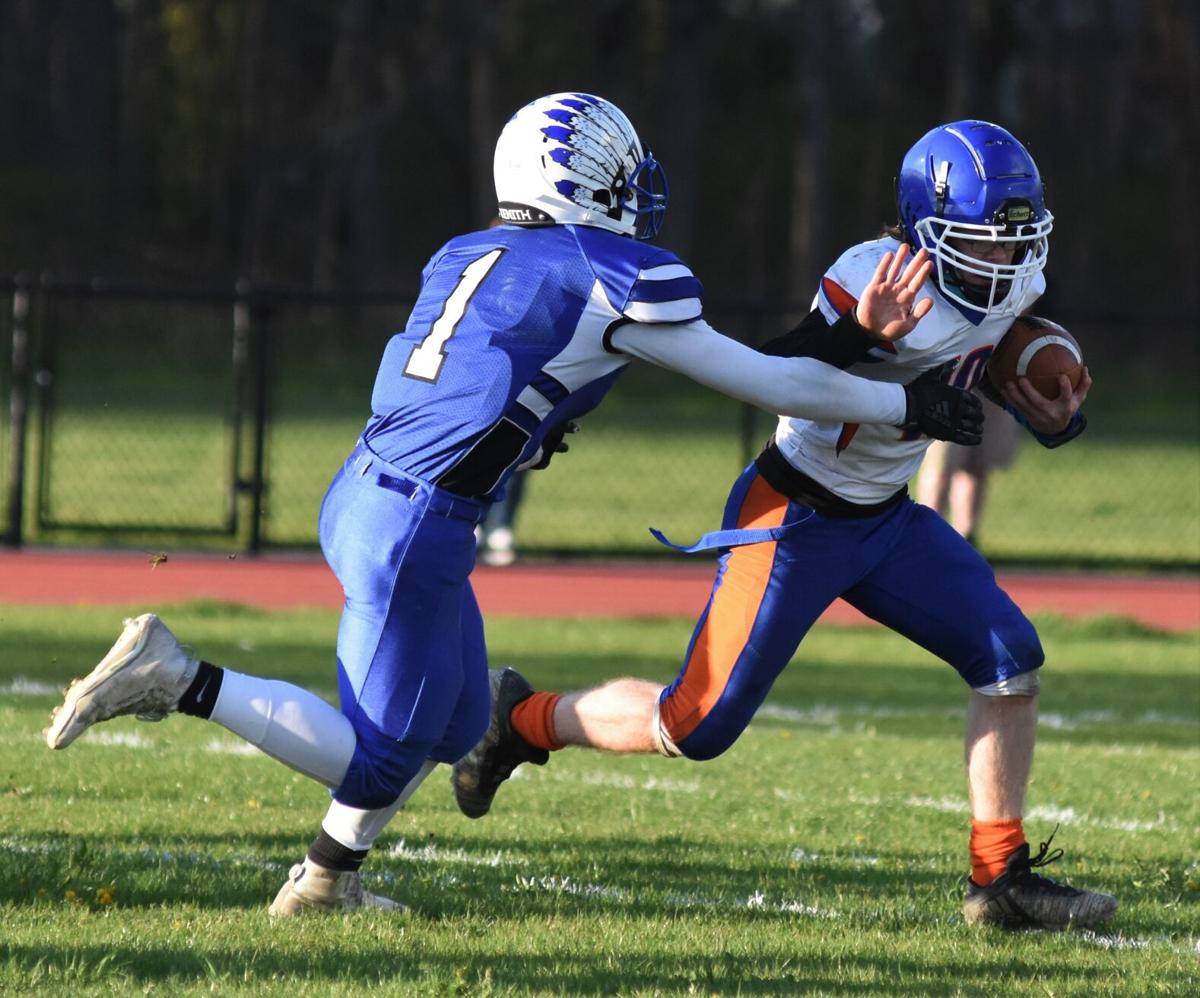 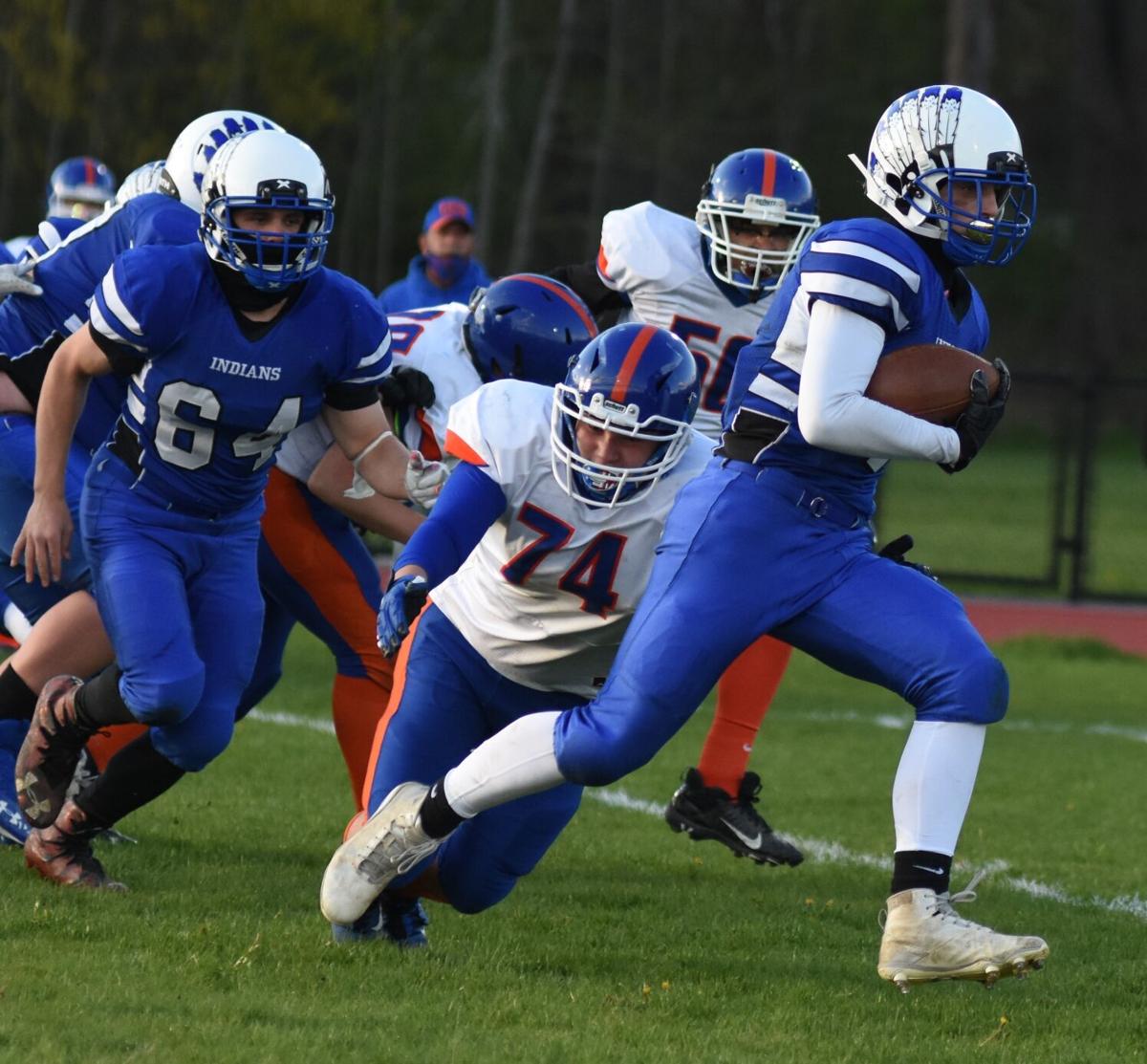 Coxsackie-Athens' Cole Wagor turns the corner and heads up the field during Friday's game against Catskill/Cairo-Durham at Coxsackie-Athens High School. 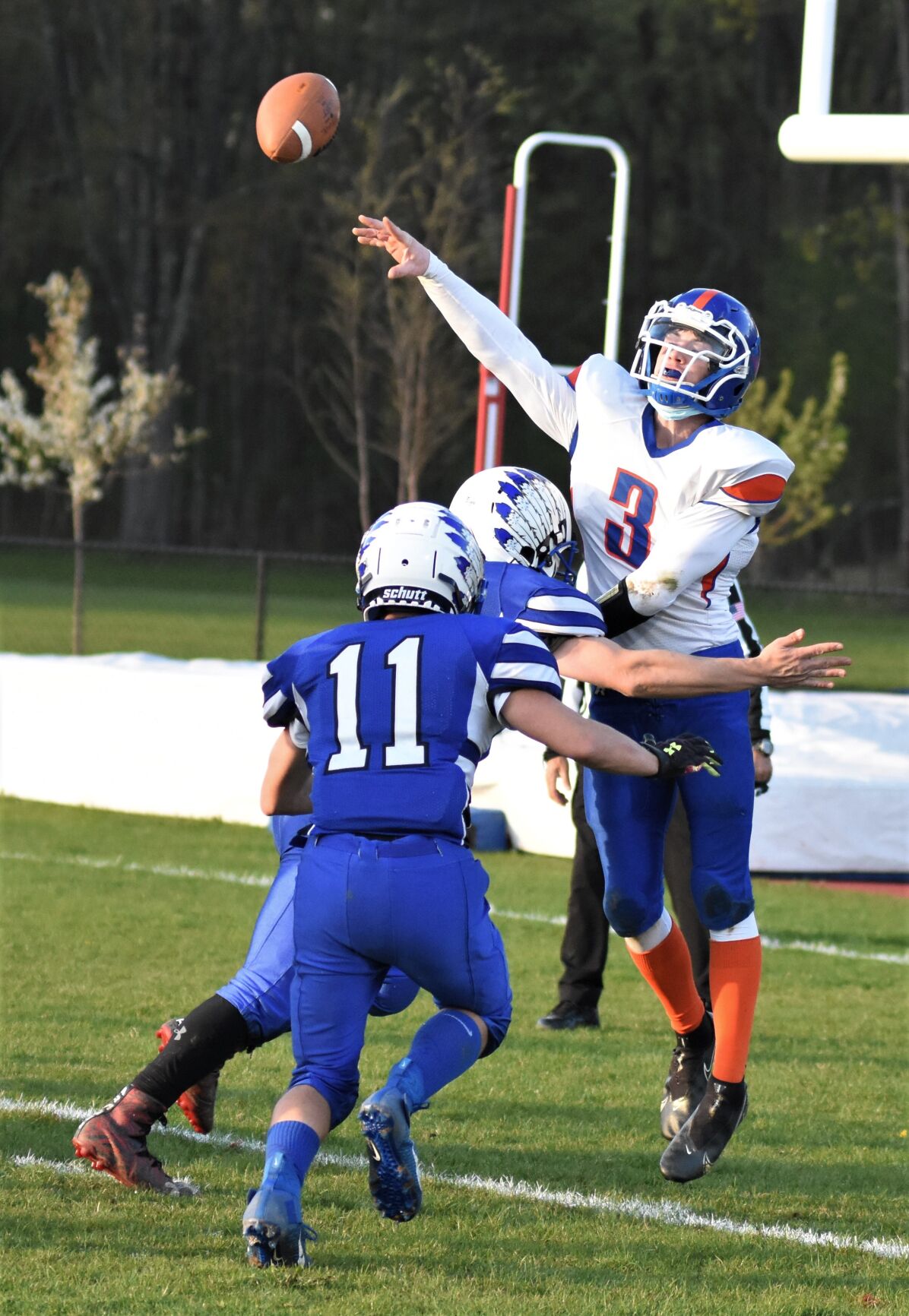 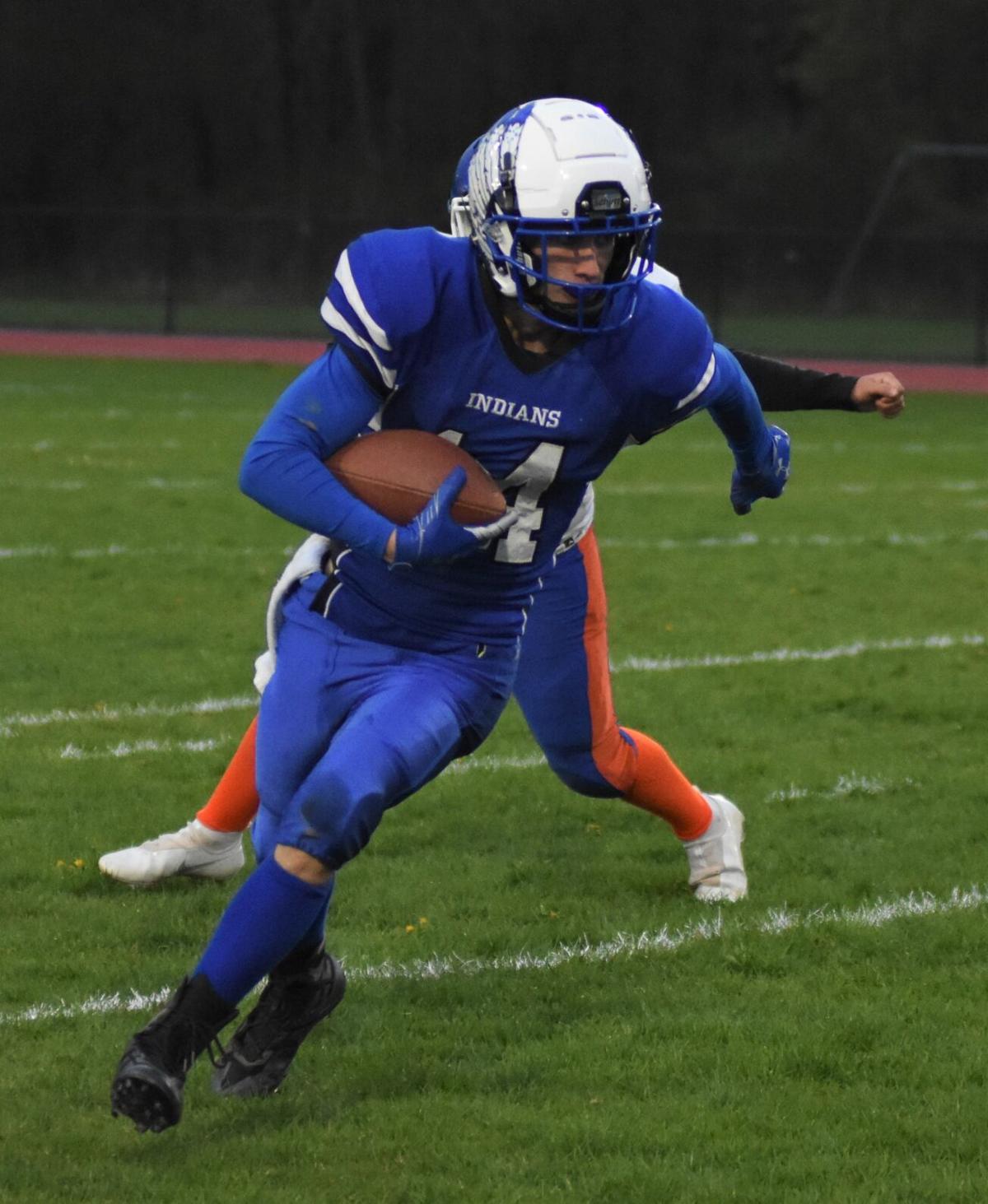 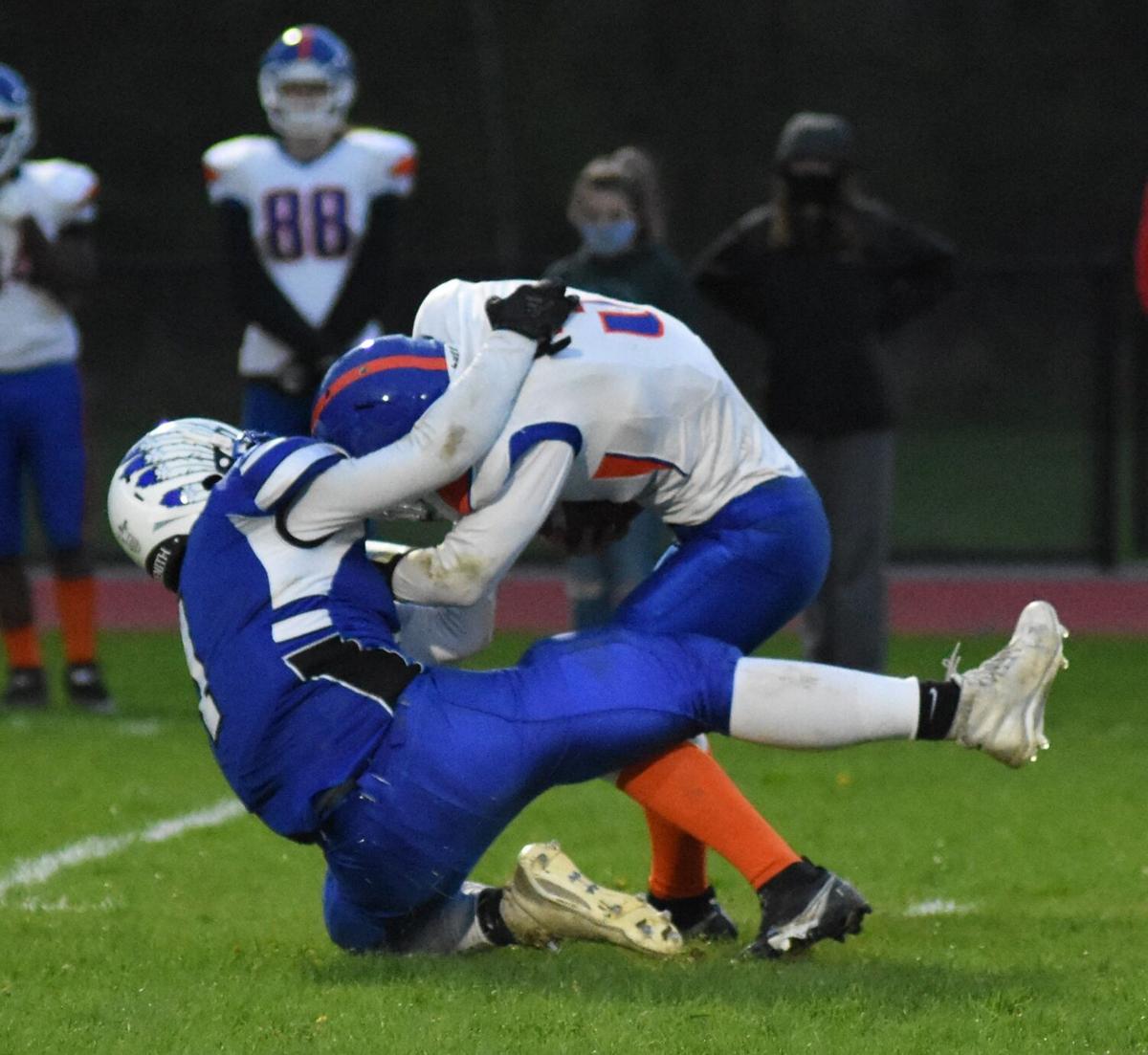 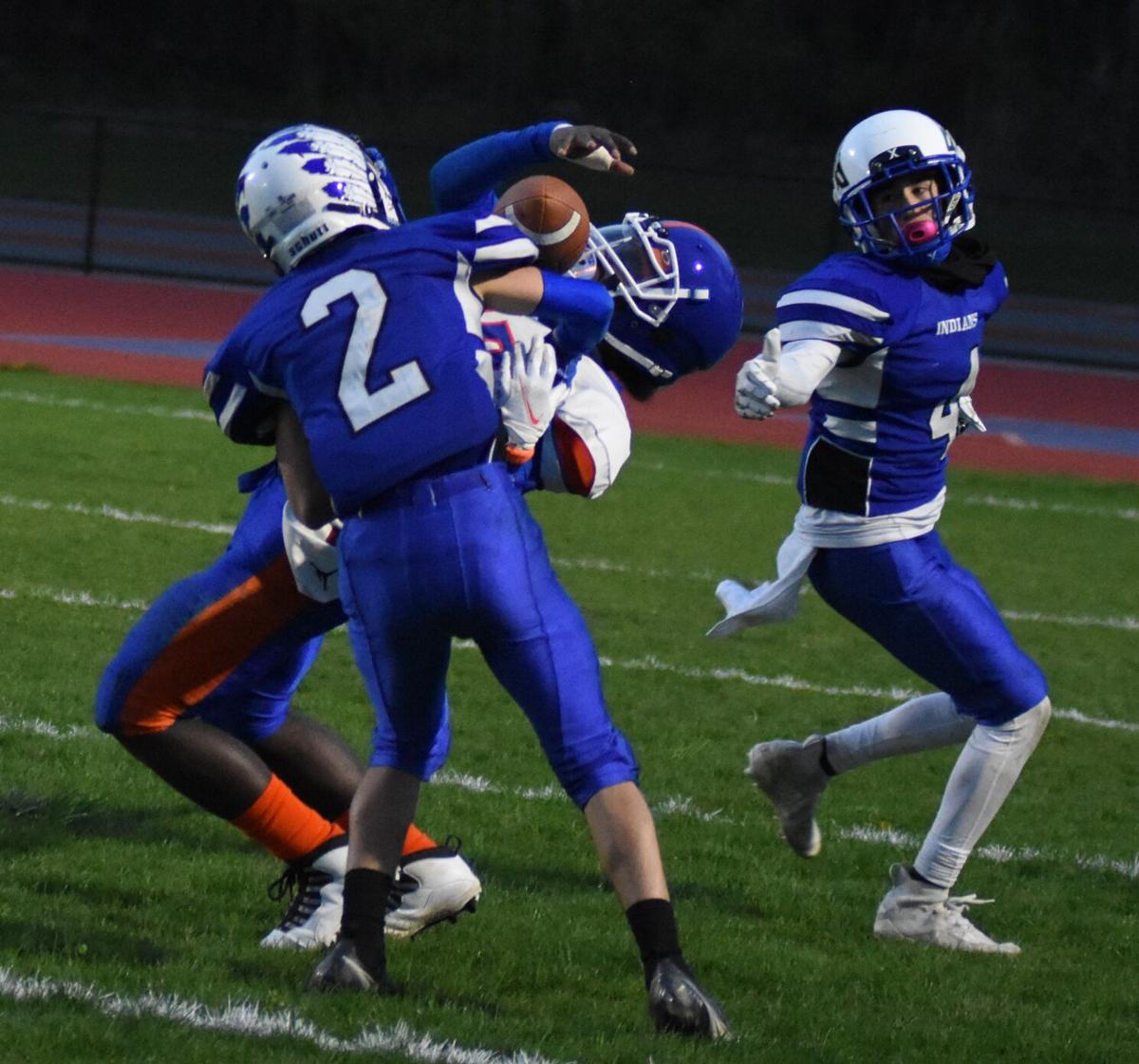 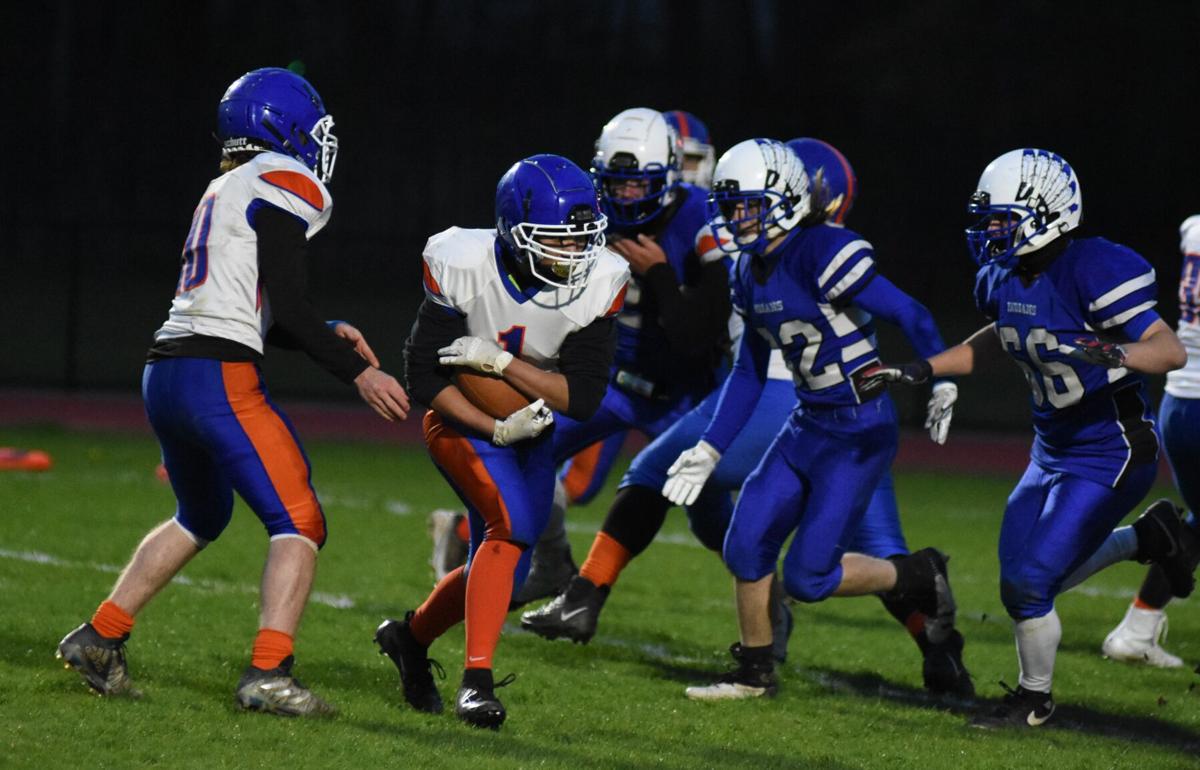 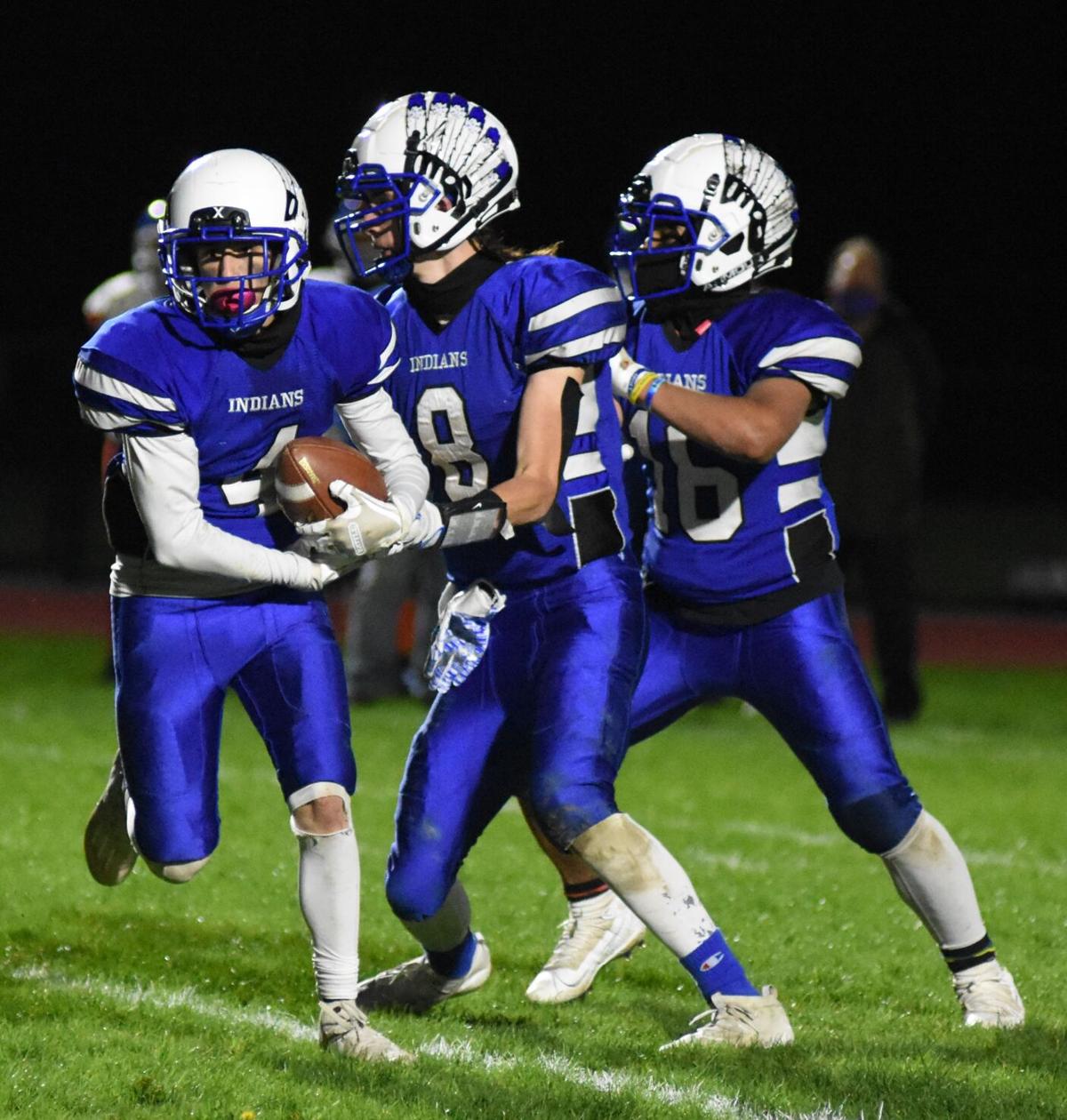 Coxsackie-Athens' Berno Carey (16) carries the ball during the first half of Friday's game against Catskill/Cairo-Durham at Coxsackie-Athens High School.

Coxsackie-Athens' Jesse Pickett (68) and teammates celebrate Pickett's touchdown in the first half of Friday's game against Catskill Cairo-Durham at Coxsackie-Athens High School.

Coxsackie-Athens' Cole Wagor turns the corner and heads up the field during Friday's game against Catskill/Cairo-Durham at Coxsackie-Athens High School.

COXSACKIE -- The Coxsackie-Athens Indians repeated as Greene County Cup champions Friday night, defeating the Catskill/Cairo-Durham Mustangs by a score of 34-12.

Though a three score margin by its end, the game was highly competitive throughout.

The Mustangs got off to a quick start as quarterback Lucas Fisher connected with Cameron Lyles for the first chunk play of the night. In addition, the Indians were called for targeting on the play and a full 15 yards were tacked onto the end of the play.

The Indians’ defense buckled down however, as they would continue to do throughout the contest, and forced a turnover on downs after recording two sacks and forcing two incompletions.

On the Indians’ subsequent drive, they moved the ball with ease, totalling more than a few first downs. A 1st down completion from Brandon Wolbert to Anthony Lansing was sandwiched between two first down runs by Berno Carey and Lansing himself.

This took the Indians down to the Mustangs’ four yard line, but they failed to score after a few plays netted them no yards, and the third down snap went over Wolbert’s head and all the way back to the 16.

This is when the Jesse Pickett factor came into play for Coxsackie Athens.

On the Mustangs’ next play from scrimmage, Fisher lost the ball while escaping a sack and Pickett recovered just 11 yards from the endzone.

Wolbert held onto the snap himself on the Indians’ ensuing drive, and ran it in from 11 yards out for the game’s first touchdown. After the extra point was blocked, Coxsackie-Athens led 6-0.

On Catskill/Cairo-Durham’s next drive, they coughed the ball up again, and Pickett fell on it for his second fumble recovery in under a minute of game time, and he wasn’t done.

The Mustangs managed to get the ball back via an interception by Lucas Fisher, but the referee completely ignored a blatant defensive pass interference that happened directly in front of him at the three yard line, and no flag was thrown.

With 1:24 left in the quarter, the Mustangs fumbled yet a third time, and Pickett found the rock for a third straight turnover on defense for the Indians. However, with Fisher still lurking in the secondary for the Mustangs, he came away with another interception for Catskill/Cairo-Durham in a wild turn of events as the first period ended with the score still 6-0.

Within the first few plays of the second, Pickett found the ball on the ground in the end zone at long last after a blocked punt, and recovered it for the Indians touchdown.

Pickett’s total grew to an official four fumble recoveries, including one for a touchdown, on a night most would be sure that he will not soon forget. After an incomplete pass on the two point try, the Indians led 12-0, with just 18 seconds off of the clock in the second quarter.

The majority of the rest of the second, was at crawl for both sides, as the referees threw flags on almost every single play. The officials also missed another obvious call that should have gone as a safety for Coxsackie-Athens, as the Mustangs kick returner touched the ball on a kickoff that then went into the end zone and a touchback was called instead.

The crew chief was also a little overzealous in his position and was going at it verbally with the Indians coaches and even some players.

On a drive late in the period for the Indians, they got the ball all the way down to the three yard line. Wolbert fumbled on the next play and the Mustangs recovered the loose ball at their own seven with 3:59 left before halftime.

The final minutes of the quarter seemed to turn into a tennis match, as each team traded position on turnovers twice each, and an intentional grounding penalty was called in the endzone on the Mustangs to end the half and give the Indians two free points and make it 14-0.

With minimal ball movement plaguing the third quarter, both teams were in search of a broken play or something to get their fire going and actually build momentum.

That very thing came for Coxsackie-Athens in the form of a pick-6 by Cole Wagor, as he ran his interception back for the Indians touchdown. Now down 21-0, the Mustangs were leading a drive to try and score before the quarter ended. Cameron Lyles kept the drive alive to end the period on a reception for a huge gain and first down yardage.

The fourth quarter began with Lyles making another huge catch for a Mustangs first down, after bobbling the ball and having to pry it away from a defender. Fisher connected with Lyles for a third time on the drive, and they got the ball across the goal line for a 35 yard touchdown.

The two point play was unsuccessful and it was 21-6. The offense was finally holding up their end for Catskill/Cairo-Durham, and their defense used the momentum to their advantage on the other side of the ball.

On the Indians’ next possession, the Mustangs forced a punt on fourth down, that they blocked and that Aiden Leo recovered in the endzone for another Mustang touchdown. The two point play afterwards was no good again for the Mustangs, but they showed fight and now it was 21-12 with 8:50 to play.

The Mustangs forced another punt by the Indians, and they took over at their own 38 and looked poised to narrow the deficit again. However, the Indians’ defense would not be beaten a third consecutive time, and Wagor intercepted a pass on the Mustangs first play of the drive.

A play later, Wolbert scrambled out of the pocket, and 25 yards up the field into the endzone for the touchdown. After the kick was good, the Indians led 28-12 and the Mustangs were running out of time.

On offense, Lyles caught another ball for a massive gain for the Mustangs, but Fisher threw another interception on the very next play, this time being picked-off by the Indians’ Anthony Lansing.

After a big gain on a run by Berno Carey, the Indians scored a final touchdown to seal the deal, on a sweep to the left by Lansing. The wind had been a factor all night and on the final kickoff of the game, the football went the minimum ten yards it had to, and the wind actually blew it backwards and into the arms of an Indians player, turning the play into an onside kick when that definitely wasn’t Coxsackie-Athens’ plan.

Up 34-12, Wolbert only had to take one or two kneel-downs to run out what was left of the clock, and the Coxsackie-Athens Indians won their second Greene County Cup game in a row against the Mustangs of Catskill/Cairo-Durham.