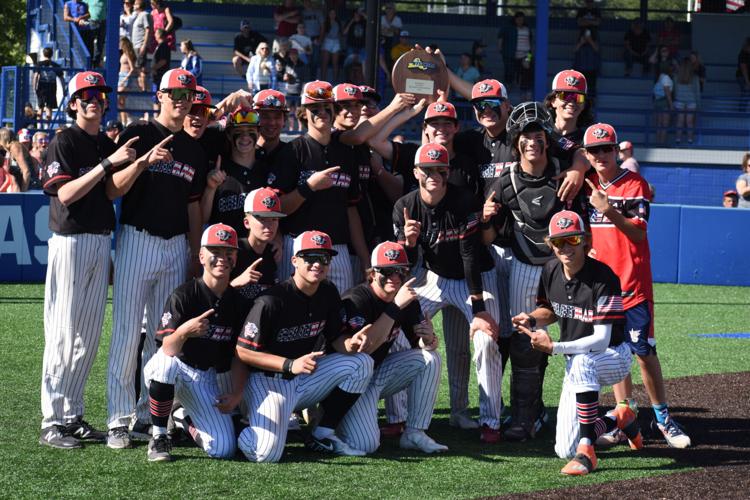 Tim Martin/Columbia-Greene Media Chatham punched its ticket to the New York State Class C Final Four with a 6-0 victory over Norwood-Norfolk in Saturday’s regional final at East Side Rec in Saratoga. 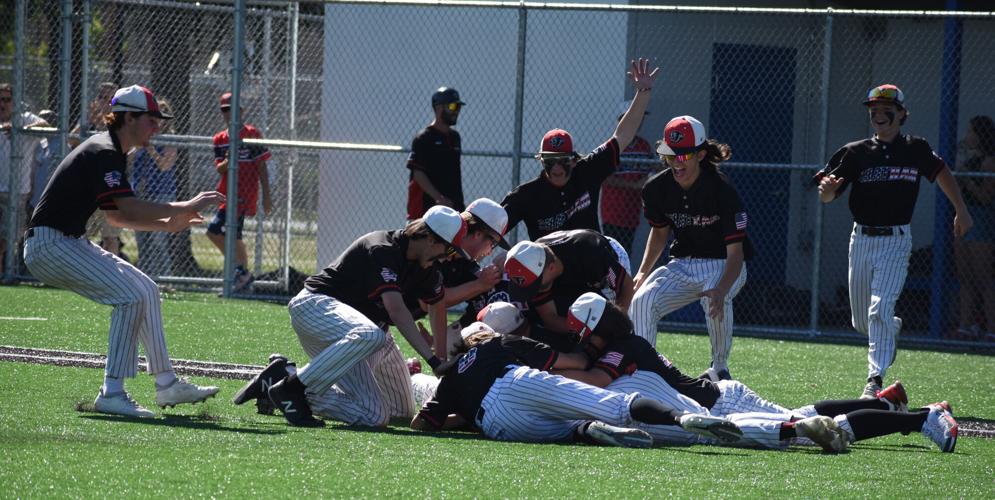 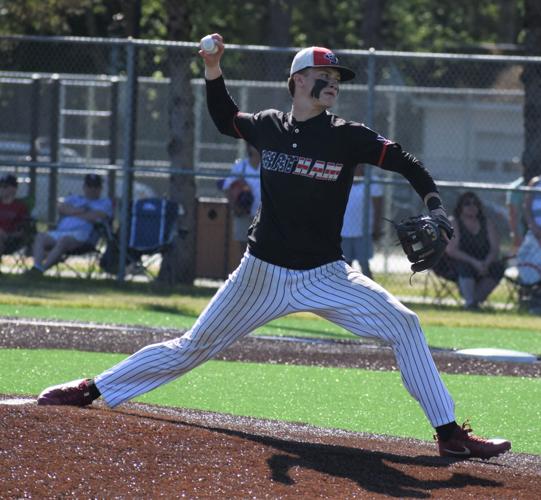 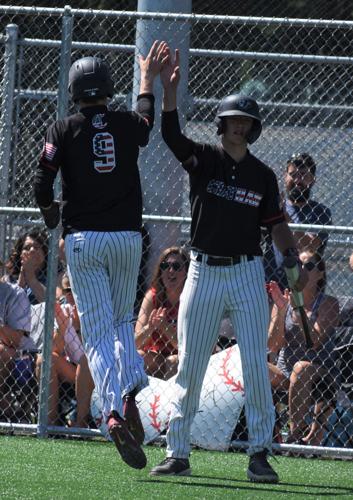 Tim Martin/Columbia-Greene Media Chatham’s Matt Thorsen (9) is greeted by Tyler Kneller after scoring Chatham’s first run of the game in Saturday’s Class C regional final against Norwood-Norfolk at East Side Rec in Saratoga. 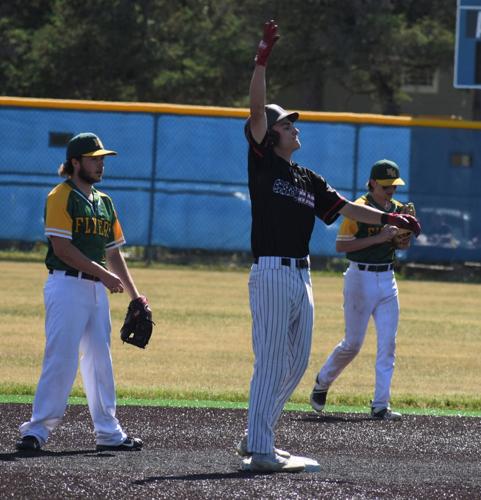 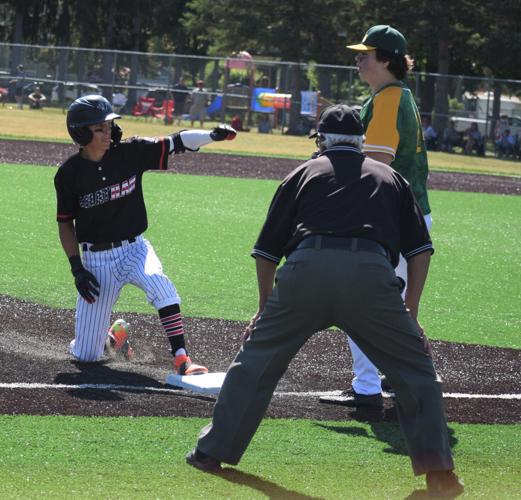 Tim Martin/Columbia-Greene Media Chatham’s Mike Pierro pulls in to third base with a triple during Saturday’s Class C regional final against Norwood-Norfolk at East Side Rec in Saratoga.

Tim Martin/Columbia-Greene Media Chatham punched its ticket to the New York State Class C Final Four with a 6-0 victory over Norwood-Norfolk in Saturday’s regional final at East Side Rec in Saratoga.

Tim Martin/Columbia-Greene Media Chatham’s Matt Thorsen (9) is greeted by Tyler Kneller after scoring Chatham’s first run of the game in Saturday’s Class C regional final against Norwood-Norfolk at East Side Rec in Saratoga.

Tim Martin/Columbia-Greene Media Chatham’s Mike Pierro pulls in to third base with a triple during Saturday’s Class C regional final against Norwood-Norfolk at East Side Rec in Saratoga.

SARATOGA — In his team’s biggest game of the season to date, Chatham ace Matt Thorsen brought his A-game.

Thorsen came within a hit batsmen of throwing a perfect game with 13 strikeouts as Chatham earned a spot in the New York State Class C Final four with a 6-0 victory over Section X champion Norwood-Norfolk in Saturday’s regional final at East Side Rec.

Thorsen was in complete control against Norwood-Norfolk and seemed to get stronger as the game went on. The junior right-hander needed just 80 pitches to get the job done, 59 of those pitches going for strikes. The Flyers’ lone baserunner came with one out in the fourth when Matt Richards was grazed by a pitch.

Thorsen said the Panthers were extremely confident coming into the contest.

“It really started when we woke up this morning,” Thorsen said. “We went to the gym, took some BP and from the step I took in the gym the energy was just through the roof. When we got on the bus, still energy through the roof, positive as ever and we knew warming up that we won this game.

“We try intimidating the other team in I/O and in our warm-ups, everybody’s watching and we just go out there and lay it all on the line and see what we can do.”

After retiring Norwood-Norfolk (14-4) in order in the top of the first, Thorsen played a key role in Chatham’s first run of the game in the bottom half of the opening frame. After getting hit by a pitch, Thorsen went to second on Cam Horton’s single, stole third and scored when the catcher’s throw got past the Flyers’ third baseman.

The Panthers added another run in the second when Kyle Jackson singled, took second n a wild pitch and scored on Jameson Balich’s base hit.

The scored remained 2-0 until the fifth when Chatham tacked on three more runs. Mike Pierro tripled and came in to score on Jackson’s double. Balich walked. Jackson stole home on a pick-off attempt at first and Balich came in to score when Vinnie Marasco reached on an error.

Chatham plated its final run in the sixth when Gavin Tanner doubled and scored when Logan Smalley’s grounder was misplayed in the infield.

Jackson led Chatham’s 10-hit attack with a pair of doubles and an RBI. Pierro added a triple and single.

Matt Richards went the distance on the mound for Norwood-Norfolk, allowing six runs (four earned) and 10 hits with six strikeouts and three walks.

“I was impressed and proud of how our team played,” Chatham coach Scott Steltz said. “We did good things in every aspect of the game Obviously, Matt being within one pitch of a perfect game on that stage is extremely impressive on the pitching side.

“We also played well defensively with (Matt) Radley running down a ball in the corner early and Kyle Jackson and others making plays on the turf.

“Our base running created pressure especially in the bottom of the first when Matt stole his way around the bases and scored to give us a lead right out of the gate.

“Offensively, the middle of the lineup had a good production. With Pierro and Jackson combining for three extra base hits and four runs between them.

“Norfolk was well coached but our guys showed up ready to play and we’re aggressive to slightly over aggressive throughout the day and I think that created the pressure that forced some mistakes for them defensively.

Our team also feeds off our crowd and community support and that was evident throughout the day. I am proud of the boys for their accomplishment in winning the sectional and regional title, as it a difficult task with the quality of teams in Section II and beyond. We are looking forward to next weekend not only because we’re in the final four but it means our team gets to spend more time together. They truly enjoy each other’s company and They’ve been a pleasure to coach.”

With five days of rest between the regional final and the state semifinal, the Panthers top three pitchers — Thorsen, Tyler Kneller and Tate Van Alstyne — will all be well-rested and ready to go.