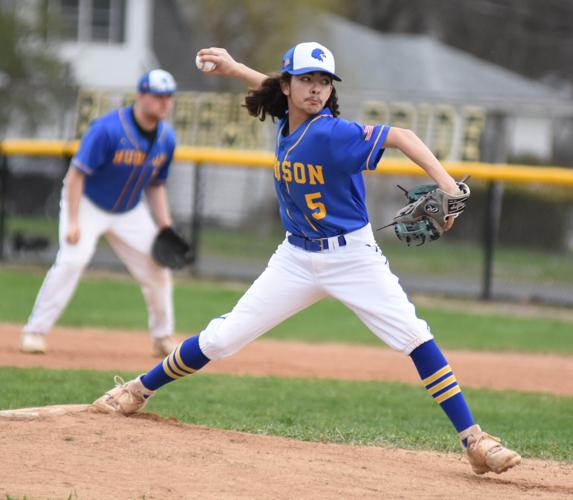 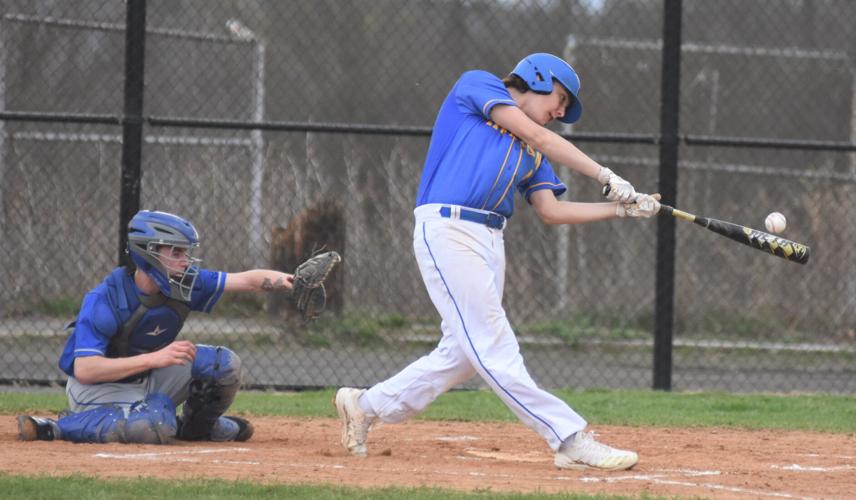 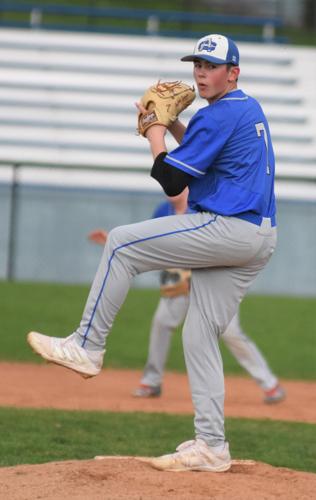 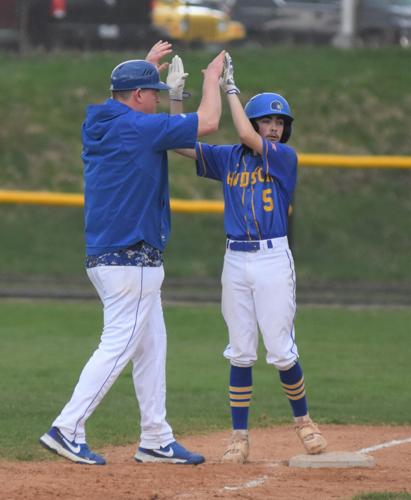 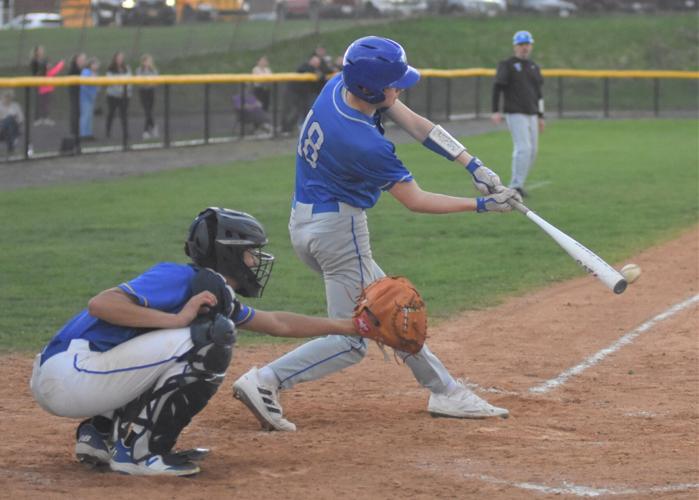 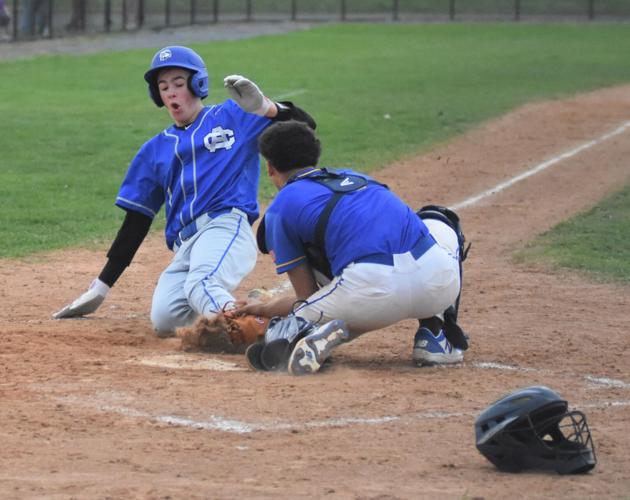 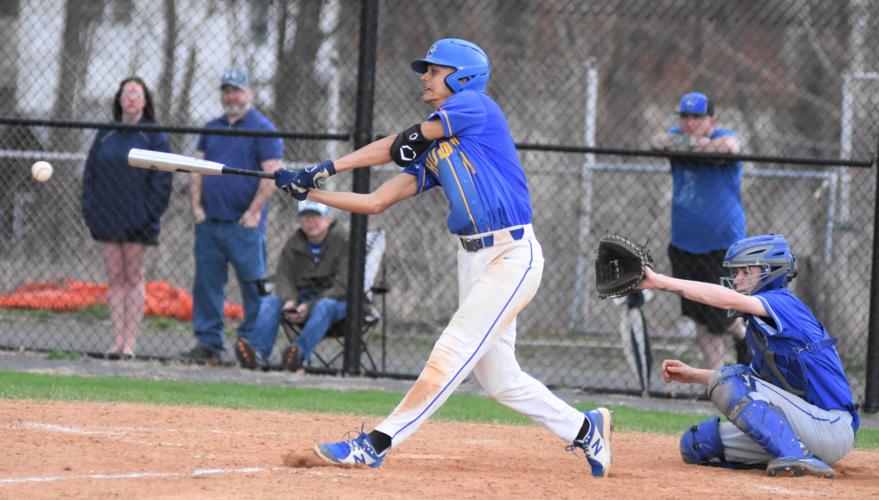 Tim Martin/Columbia-Greene Media Hudson’s Isaiah Maines rips one of the four hits he had during Thursday’s Patroon Conference baseball game against Coxsackie-Athens. 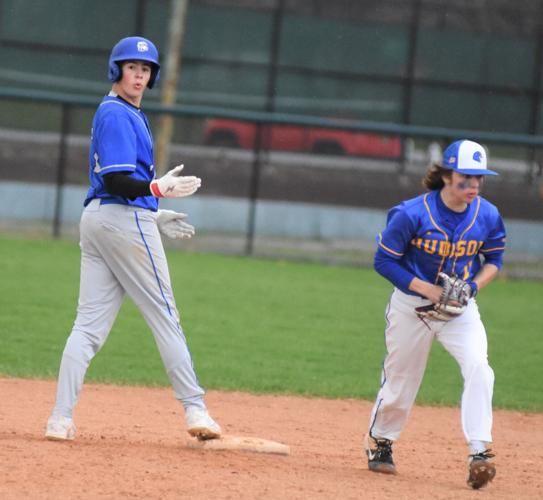 Tim Martin/Columbia-Greene Media Coxsackie-Athens’ Andrew Sager (7) reacts after being called out at second base on a pick-off play during Thursday’s Patroon Conference baseball game against Hudson. 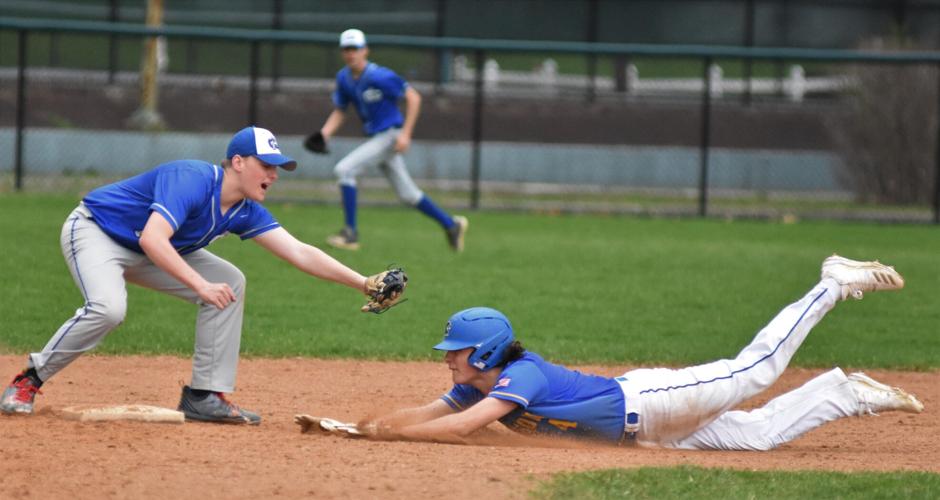 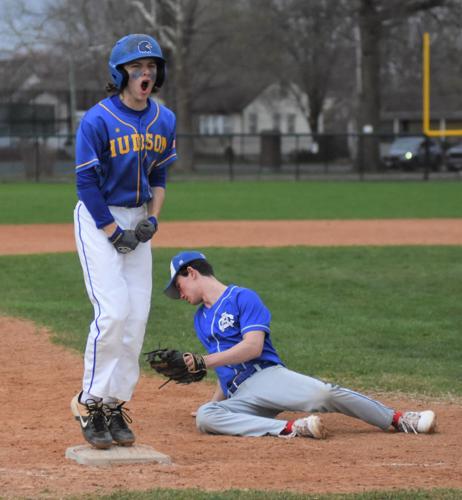 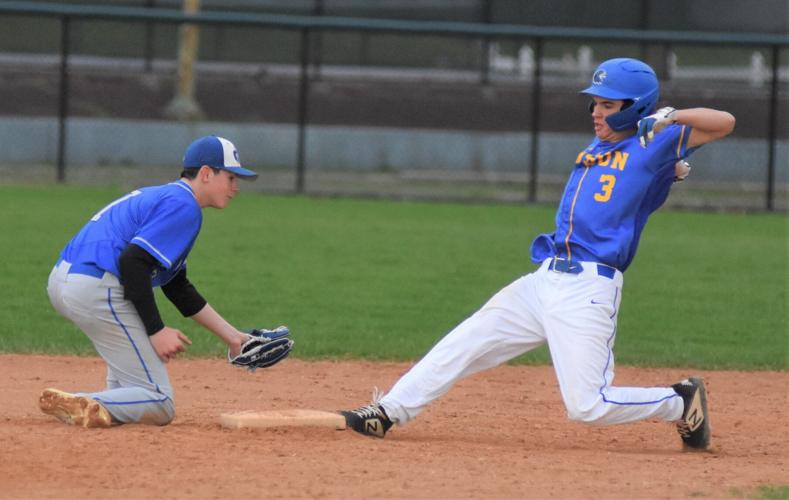 Tim Martin/Columbia-Greene Media Hudson’s Jordan Moon pulls in to second base with a double ahead of the tag of Coxsackie-Athens shortstop Andrew Sager during Thursday’s Patroon Conference baseball game. 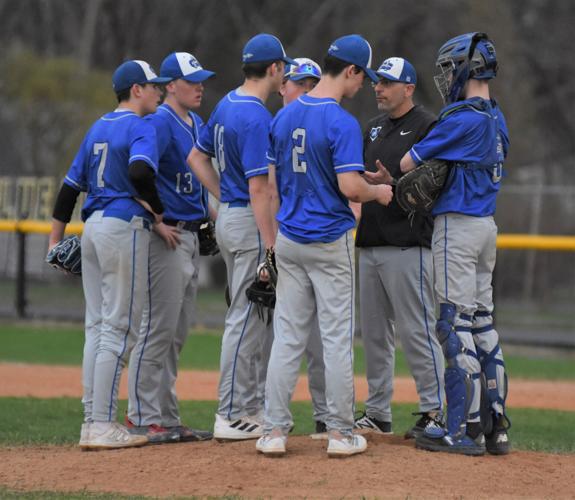 Tim Martin/Columbia-Greene Media Coxsackie-Athens coach Curt Wilkinson has a meeting on the mound with his team during Thursday’s Patroon Conference baseball game against Hudson. 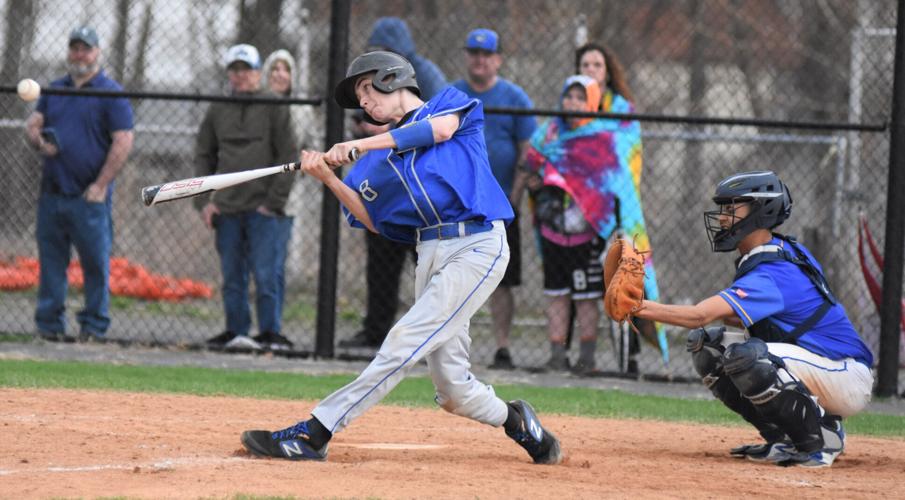 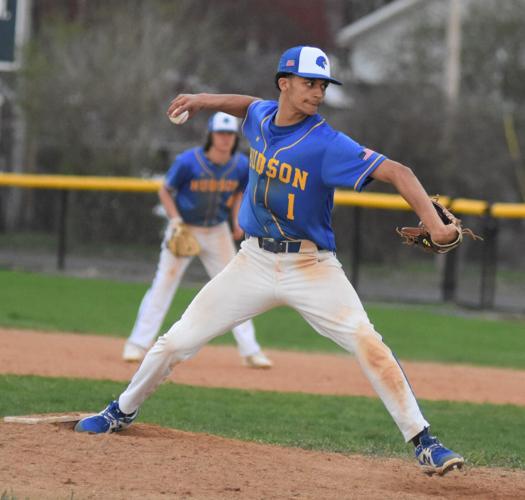 Tim Martin/Columbia-Greene Media Hudson’s Isaiah Maines rips one of the four hits he had during Thursday’s Patroon Conference baseball game against Coxsackie-Athens.

Tim Martin/Columbia-Greene Media Coxsackie-Athens’ Andrew Sager (7) reacts after being called out at second base on a pick-off play during Thursday’s Patroon Conference baseball game against Hudson.

Tim Martin/Columbia-Greene Media Hudson’s Jordan Moon pulls in to second base with a double ahead of the tag of Coxsackie-Athens shortstop Andrew Sager during Thursday’s Patroon Conference baseball game.

Tim Martin/Columbia-Greene Media Coxsackie-Athens coach Curt Wilkinson has a meeting on the mound with his team during Thursday’s Patroon Conference baseball game against Hudson.

The Riverhawks trailed 8-3 in the top of the seventh and scored four runs to cut the lead to 8-7. However Isaiah Maines came in to close the door for the Bluehawks and stranded the tying run on third, striking out Brayden Conrad for the final out.

Ashton Hotaling started the game on the mound for Hudson and gave up a leadoff double to Sean Scott of Coxsackie-Athens. Sam Mozzillo popped out to shortstop for the first out as the Riverhawks looked to put a run on the scoreboard early. However, Dillon Hynes flew out to center on a hit-and-run and Scott was doubled off on the throw back to second base and the inning was over.

Andrew Sager took the ball for the Riverhawks in the bottom of the first, and Isaiah Maines started the inning with a base hit. After a shallow fly out by Connor Tomaso, Maines stole second but was picked off and tagged out in the ensuing rundown trying to take third. Jordan Moon worked a two out walk, stole second base, and came around to score on an RBI single from Hunter Degraff to give Hudson a 1-0 lead.

The Riverhawks had the bases loaded with nobody out in the top of the second as Michael O’Connor came up and struck out for out number one. Berno Carey hit a foul pop that Maines tracked and made a dangerous grab as he and two other infielders converged on the ball. Brayden Conrad struck out on three pitches to end the inning.

Brian Curran hit the first pitch he saw into the outfield for a leadoff single in the bottom half of the second, and then stole second base. He then ran into a tag at third for the first out on a ground ball hit by Jake Hromada. After the bases were loaded, the Riverhawks convened on the pitcher’s mound to calm Sager’s nerves.

Maines stepped into the box and poked one to right field for a two-run single and the Bluehawks led 3-0 after two full innings of play while the teams fought through rain and clouds that soon circled the field.

Coxsackie-Athens had runners on second and third with one out in the top of the third, and they both scored on a single to left by Keegan O’Callaghan that got past Curran to make it 3-2.

With the bases loaded and two outs, Carey singled to left field to tie the game 3-3 but the go-ahead run was gunned down at the plate on the throw from Curran. Sager had a nice bounce-back inning in the bottom of the third and got the Bluehawks out 1-2-3 on a groundout and two strikeouts.

Ahead to the bottom of the fourth with the game still tied at three, Matt Antonelli walked with one out and stole second after making a great catch in right field in the top half.

Hotaling moved Antonelli to third on a grounder to the right side, and Maines brought him home on a hard-hit ball through the third baseman’s glove. Tomaso flew out on a line to Carey in left field, but Hudson had a 4-3 lead through four.

Sager lined one into the outfield with one out in the fifth, just out of Moon’s reach at shortstop, and hustled for a double on the play.

After a Christian Tedford fly out, Sager was picked off of second base by Hotaling to escape the extra base hit unscathed. Sager walked Degraff with one out in the bottom half and after Degraff stole second, he was awarded third on a puzzling balk call. Sager had already thrown the pitch and it was called after the catcher threw it back to him. He was unbothered however, and struck out Curran to end the inning.

Hotaling had a quick inning of his own in the sixth, retiring the Riverhawks in order to get the Bluehawks back to the plate. Tedford took the mound in the bottom of the sixth in a relief role for the Riverhawks as Sager moved to short and stayed in the game.

With pinch-runner Jeremiah Wilburn at second base, Antonelli popped one up into the shallow outfield behind short and Sager made a basket catch over his shoulder for the first out. After Wilburn moved up to third on a groundout, Maines drove him in with another RBI base hit to make it 5-3.

Tomaso and Moon hit back-to-back RBI doubles for Hudson to drive in a run each and extend the lead to 7-3. After another Riverhawks pitching change brought in Blaine Apa, the Bluehawks scored one last run as Degraff got caught in a rundown. He bought enough time for the runner to score from third before he was tagged out and the lead was now 8-3, and Hudson needed just three outs to end it.

Scott doubled to start the inning and the Bluehawks finally gave Hotaling a much needed break as they brought Tomaso in to hopefully close it out. Tomaso walked Mozzillo and allowed one run on a wild pitch, allowing the Riverhawks to come back within “slam range” 8-4.

Tomaso loaded the bases and was quickly exchanged for another pitcher, Jordan Moon this time. Coxsackie-Athens scored once again on a wild pitch, and then another on a mishandled throw to first on a routine ground ball to third by Tedford. Tedford quickly stole second base to move the tying runs into scoring position for the Riverhawks, trailing 8-6.

Brady Penet was called on to pinch hit and he worked a walk to load the bases with one out as Maines took off his catching gear and went to the mound. Maines traded a run for an out as Carey grounded one to second and was thrown out at first for the second out and the lead was down to one run 8-7.

Brayden Conrad stepped into the batter’s box and fouled off the first three pitches he got from Maines, with the tying run still 90 feet away.

After taking a ball outside the zone, Conrad was fooled by Maines on a ball low below the strike zone this time and was struck out. The catcher threw to first base to complete the strikeout and the Riverhawks left the tying run on third base as the Hudson Bluehawks held on to win 8-7 in thrilling fashion.