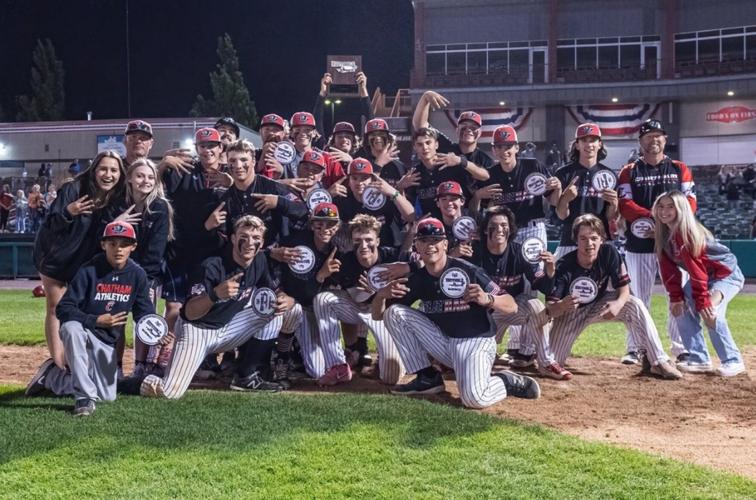 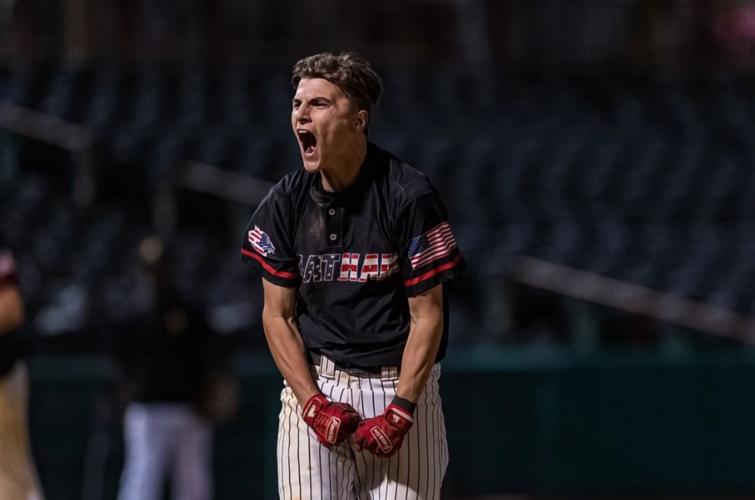 Robert Simmons photo Chatham’s Kyle Jackson reacts after drawing a walk to force in the game-winning run in the bottom of the 11th inning of Thursday’s Section II Class CC baseball championship game against Canajoharie at Joe Bruno Stadium.

Robert Simmons photo Chatham’s Kyle Jackson reacts after drawing a walk to force in the game-winning run in the bottom of the 11th inning of Thursday’s Section II Class CC baseball championship game against Canajoharie at Joe Bruno Stadium.

TROY — Kyle Jackson drew a bases-loaded walk to force in the game-winning run in the bottom of the 11th inning as Chatham defeated Canajoharie, 3-2, to win the Section II Class CC baseball championship on Thursday at Joe Bruno Stadium.

With the game more than 3 hours old and tied at 2-2, Chatham began its 11th inning rally with Matt Thorsen drawing a walk. Cam Horton followed with a walk and LJ Morse reached on a bunt single to load the bases with no outs. After a strikeout, Jackson walked on a 3-2 pitch just off the plate to force home Thorsen with the decisive run.

Chatham advances to play Class C champion Galway in the Class CC-C playoff on Saturday at 7 p.m. at Joe Bruno Stadium. The winner of that games moves on to state regional play.

No. 1 seed Chatham (22-1) opened the scoring in the bottom of the third inning on Tate Van Alstyne’s RBI double.

Canajoharie, the N. 2 seed, answered with two in the top of the fourth off of Panthers’ starter Matt Thorsen as Riley Montanye walked, Cody Hyney reached on an error and Aiden Bowerman walked to load the bases.

The Cougars eventually scored two runs without the benefit of a hit in the inning to go up, 2-1.

Canajoharie kept its one-run edge until the bottom of the sixth. Cam Horton started the Chatham sixth with a base hit to left and Tyler Kneller followed with a double to put runners on second and third. Mike Pierro’s single scored Horton with the game-tying run, before Canajoharie pitcher Jack Montanye got out of the jam with a strikeout.

The Cougars threatened to regain the lead several times in extra innings, getting a runner to third with two outs in each of the eighth, ninth and 10th innings, but each time Chatham reliever Tate Van Alstyne slammed the door shut without surrendering a run.

Van Alstyne had a double and single and Kneller doubled for the Panthers. Pierro added two singles and an RBI, Jackson singled and drove in a run and Horton, Morse, Jameson Balich and Matt Radley all singled.

Hyney, Tommy Weingart and LaAnthony Fairley all singled for Canajoharie.

Jack Montanye pitched nine innings for the Cougars, striking out two, walking one and allowing two runs and eight hits. Richie Tamsett finished up and took the loss, allowing a run and two hits with two strikeouts and three walks.

“Our coaching staff, parents, fans and community are extremely proud of this team of young men,” Chatham coach Scott Steltz said. “From the first practice we have talked about how pressure is a privilege and that we love adversity because we will always be better at handling it.

Tonight’s game was a perfect example of how these guys do that. Canjo put a lot of pressure on us with all the traffic they had on the bases and to allow only two runs in 11 innings is a testament to our guys.

Both Matt and Tate were electric and won almost every single pitcher-hitter confrontation. Between that and the energy our team and fans had was enough to keep us locked in during all those adverse moments. Although we had a few things go against us, we just kept winning pitches.

For our guys to stick with our approach for that long in that environment it’s just a testament to what kind of young men and teammates they are. We couldn’t be prouder of them.”