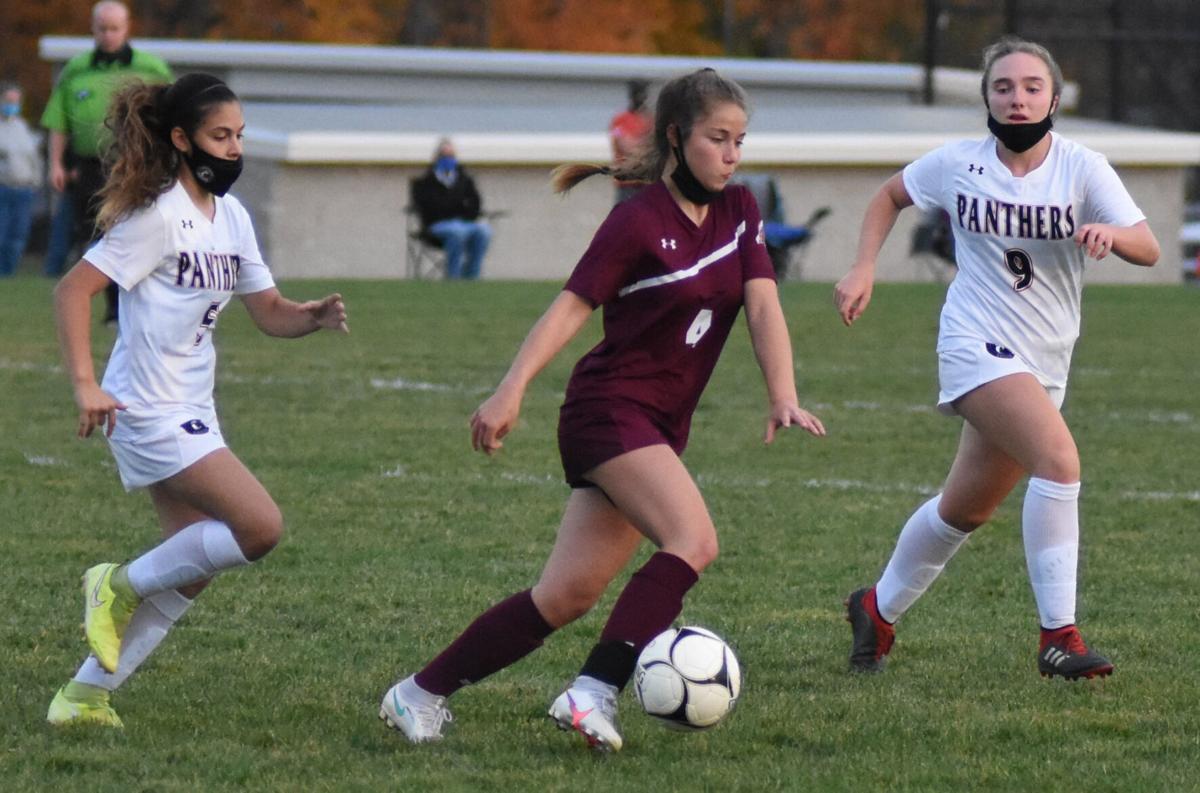 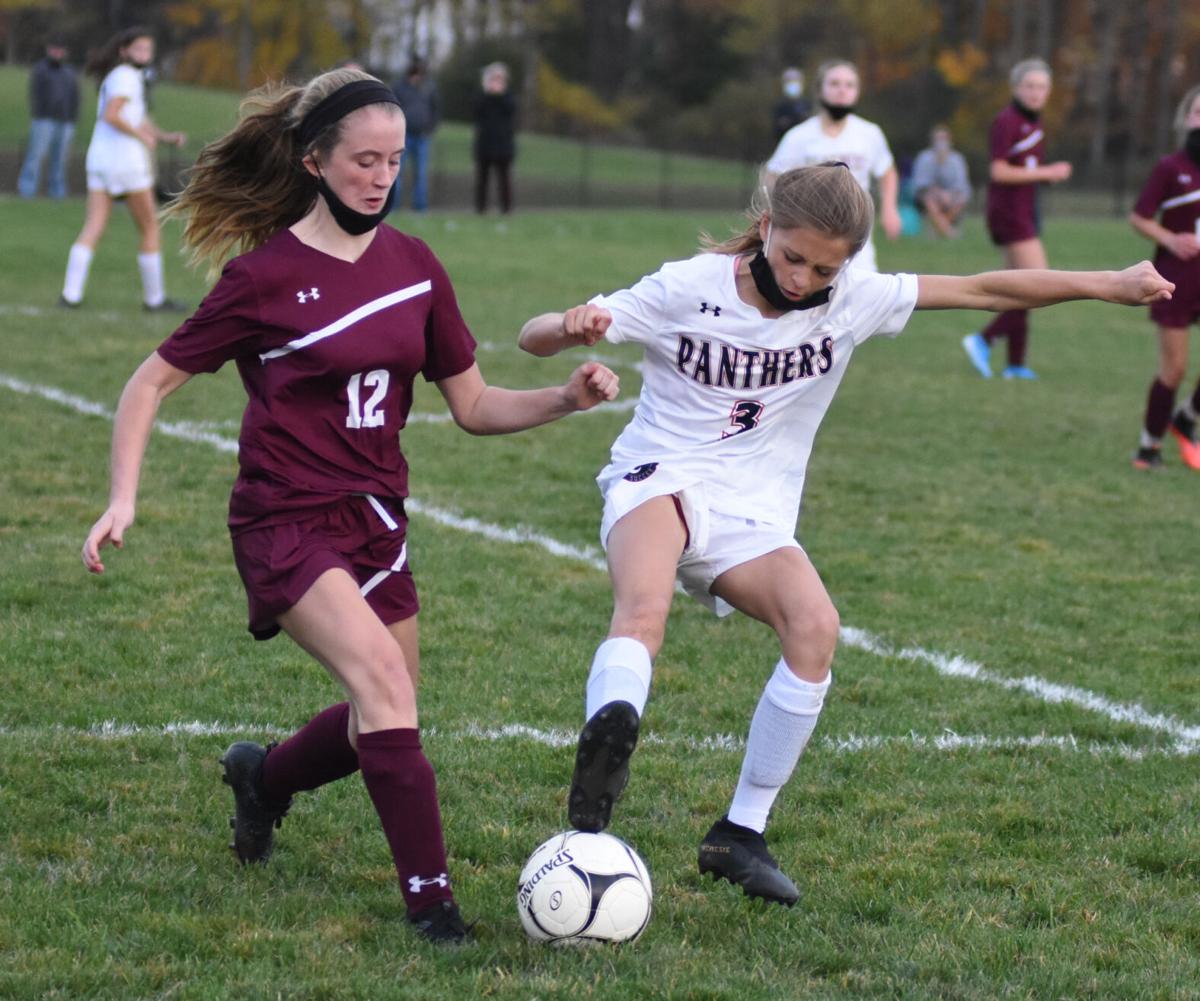 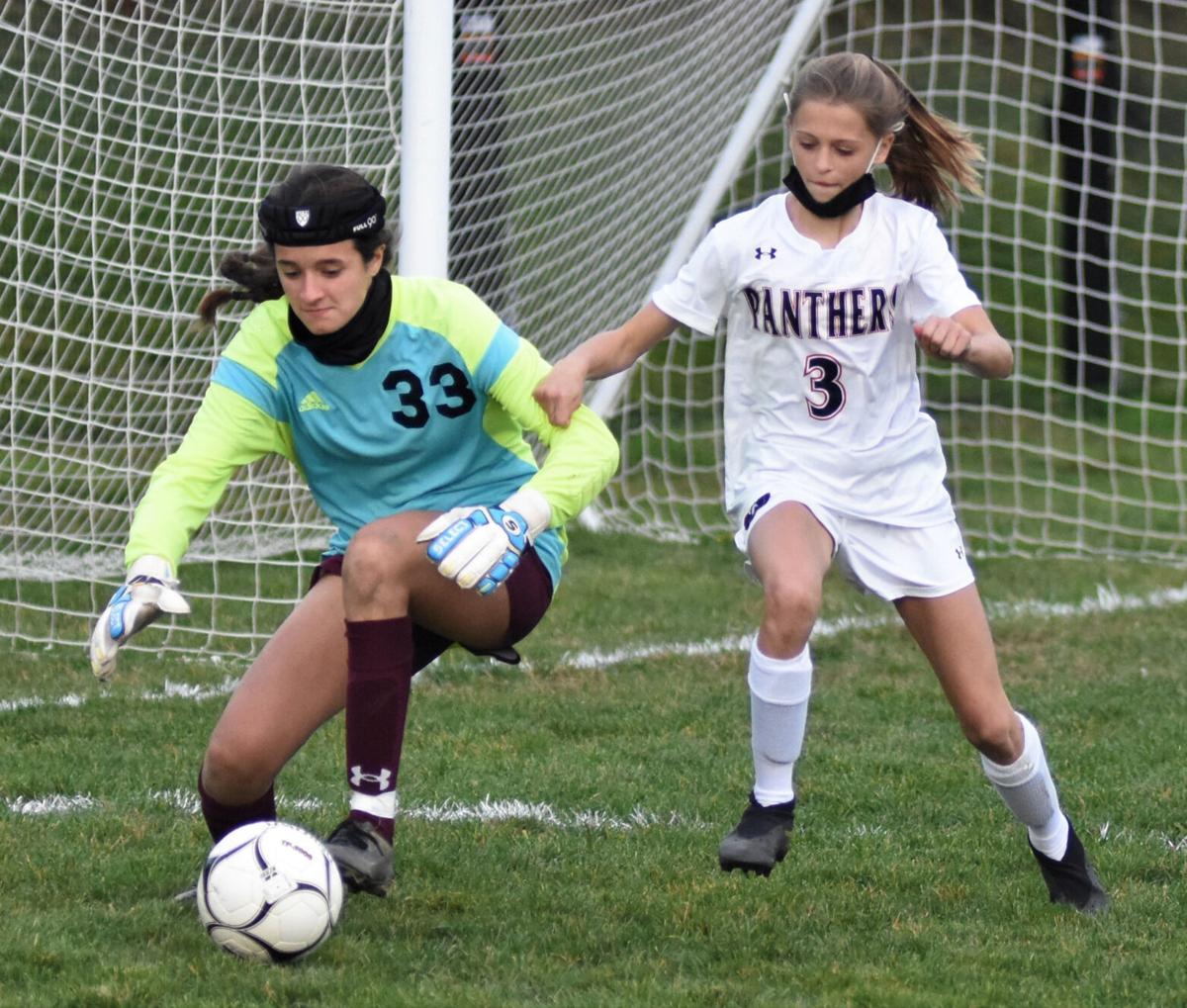 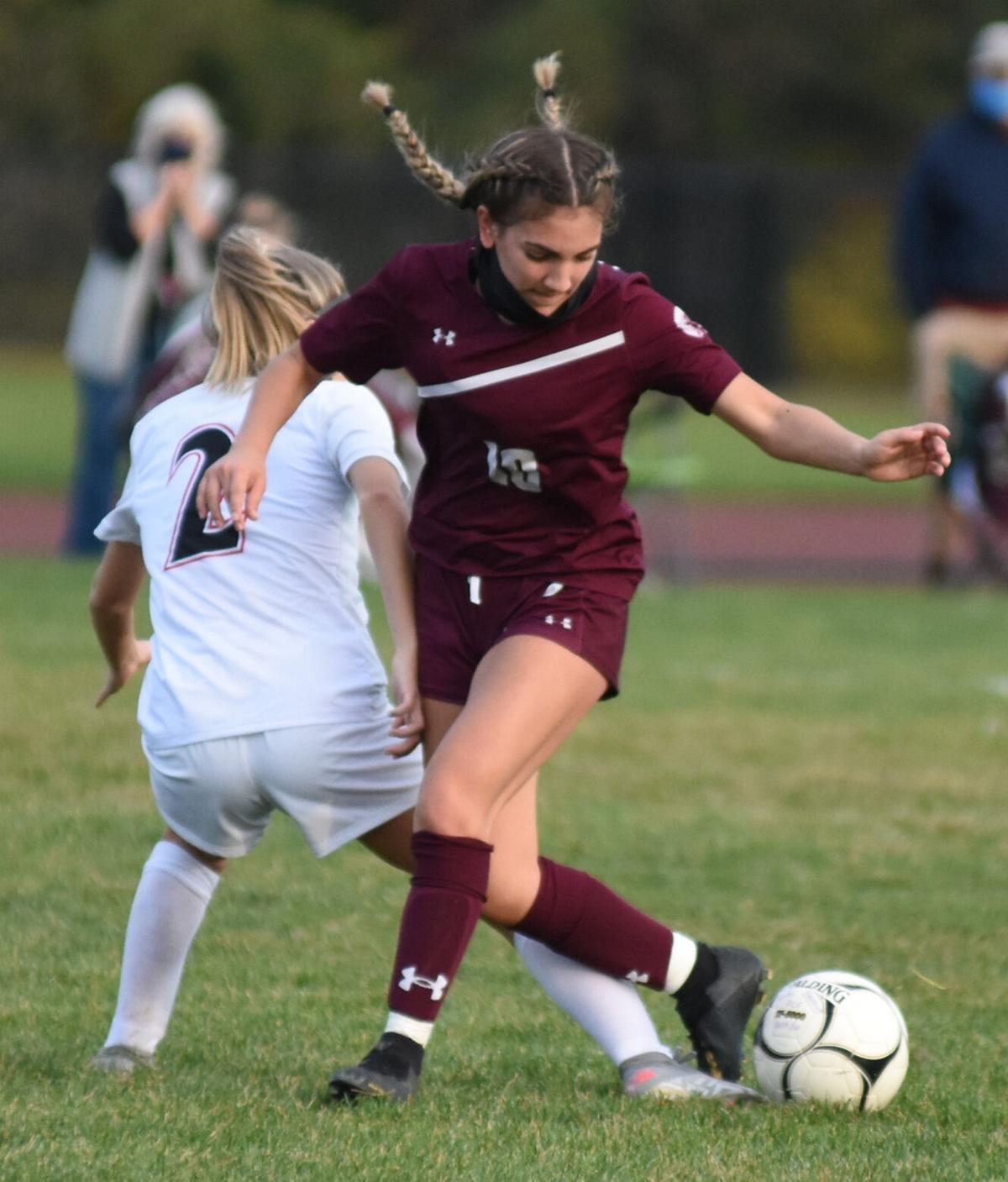 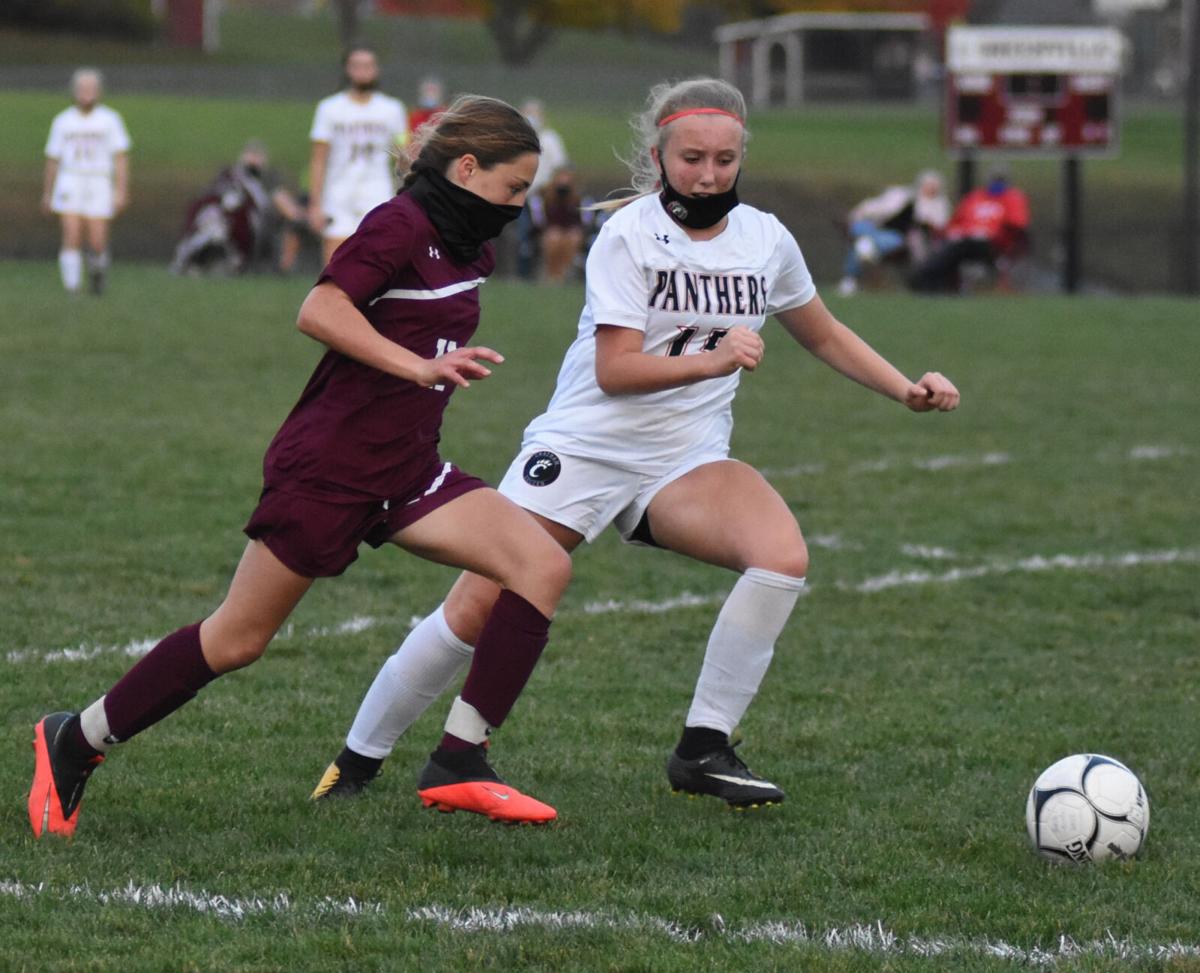 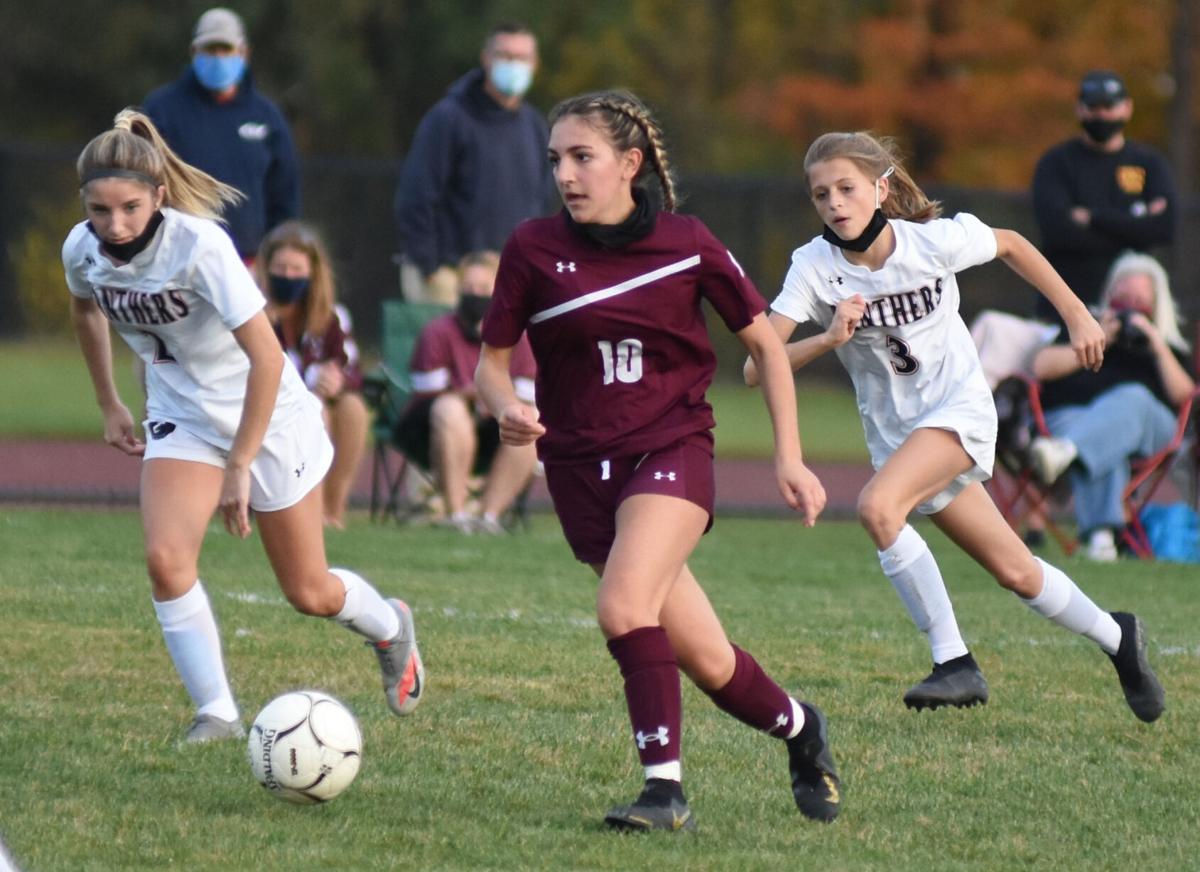 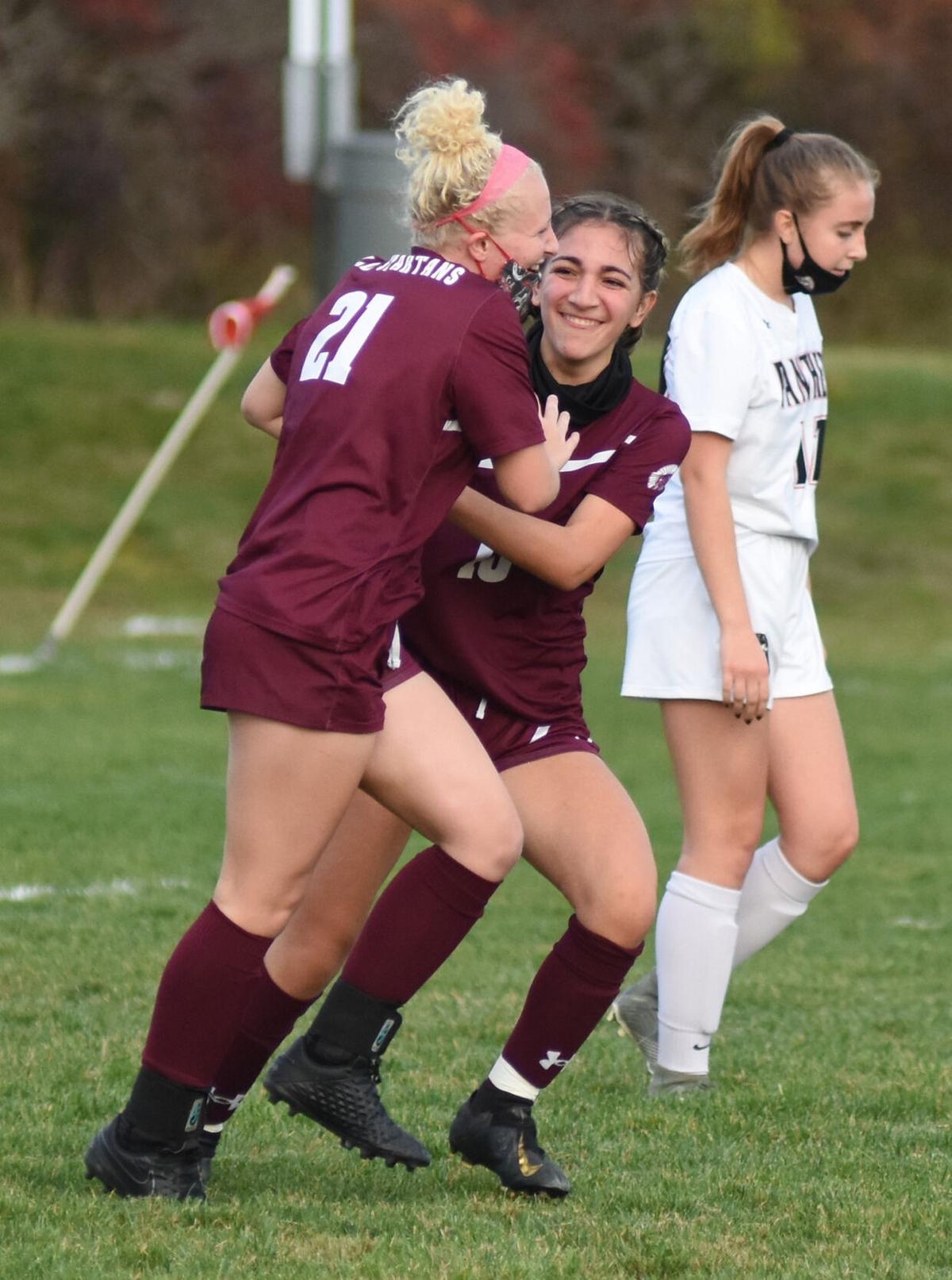 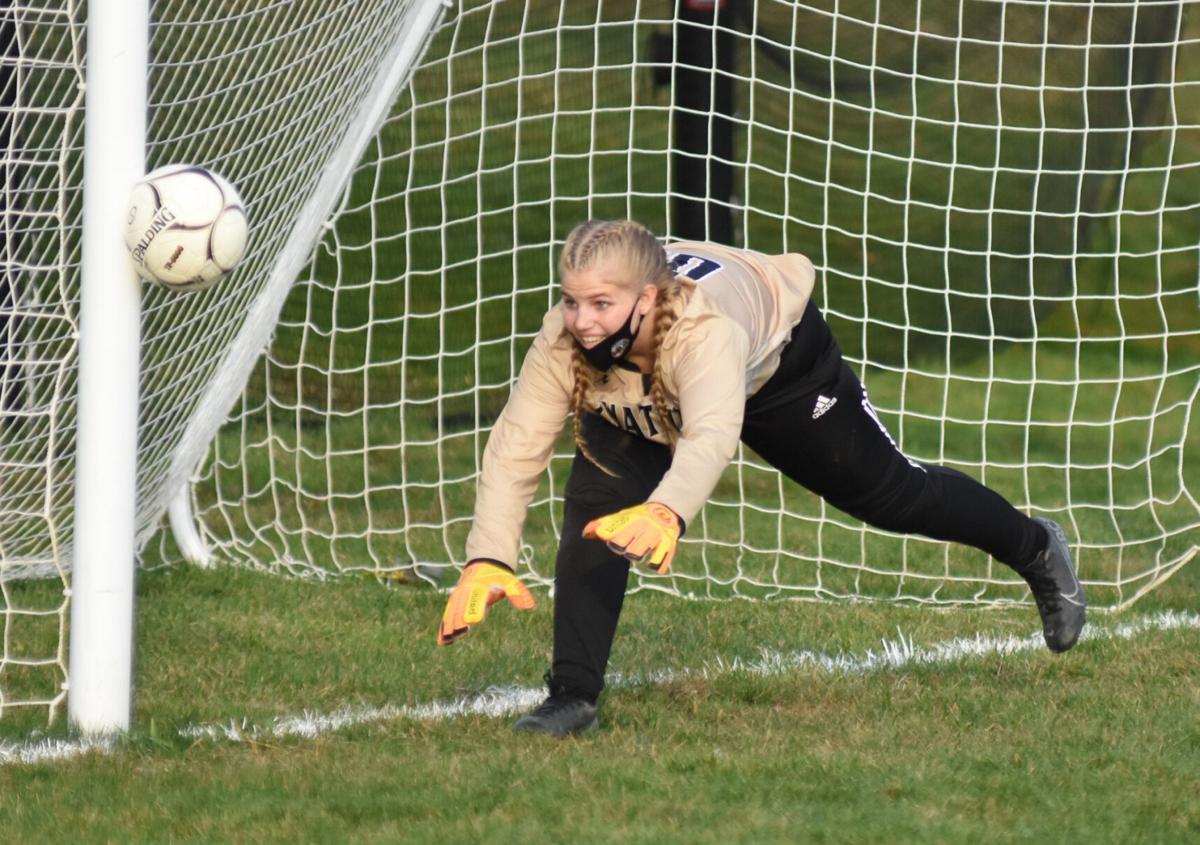 Tim Martin/Columbia-Greene Media A shot on goal hits the post as Chatham goalkeeper Haley Pulver dives in a save attempt during Wednesday’s Patroon Conference girls soccer game against Greenville at Greenville High School. 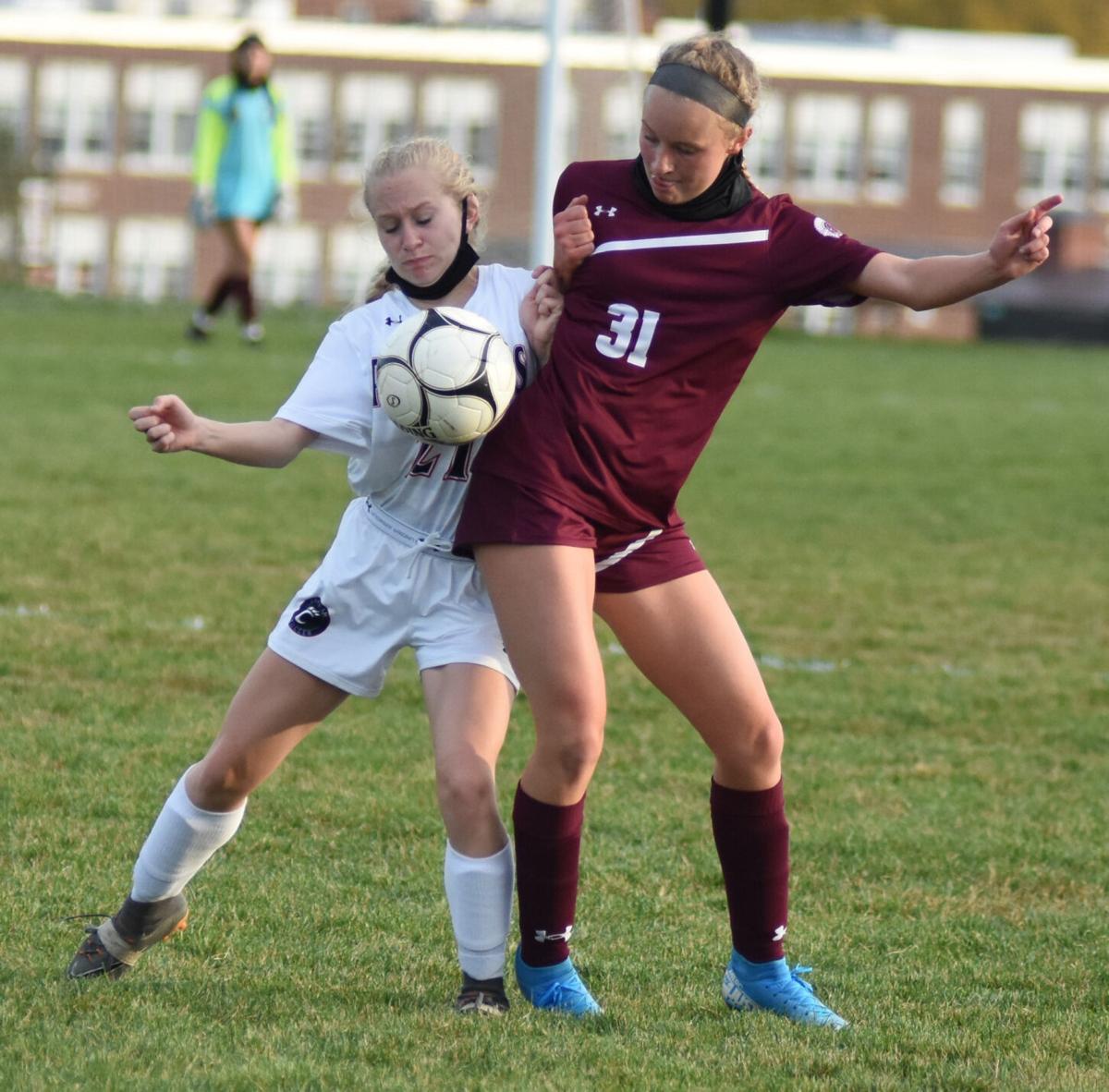 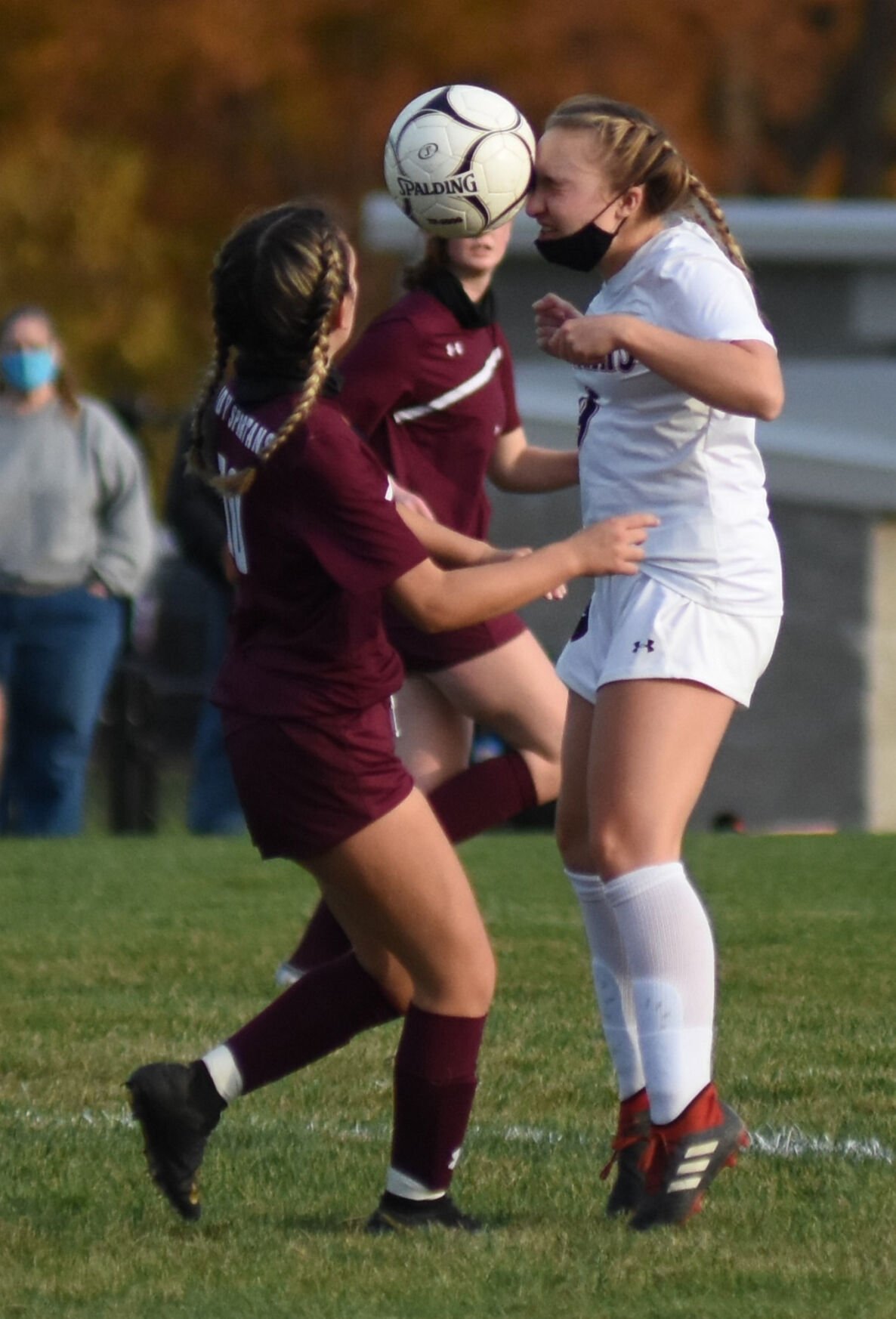 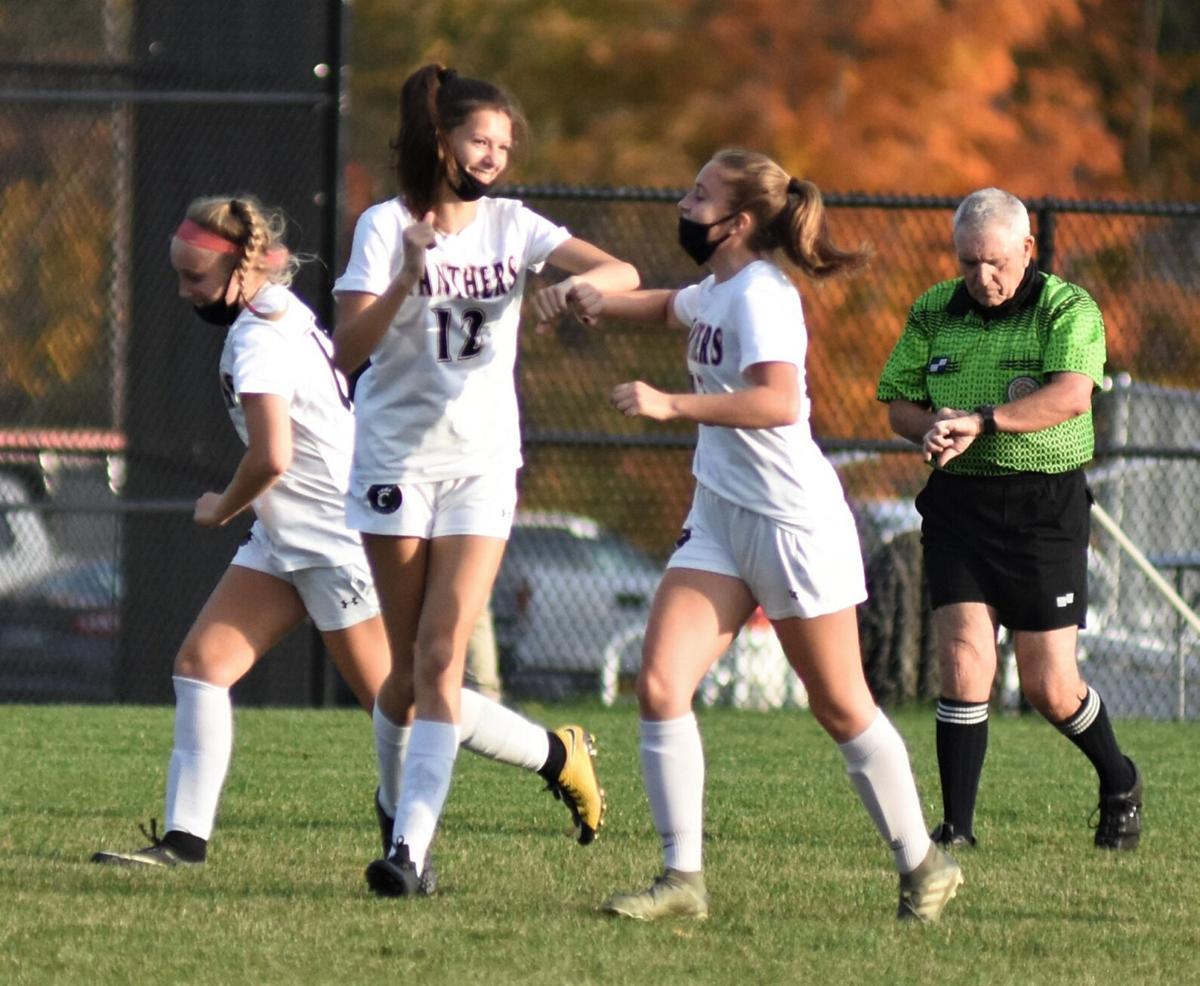 Tim Martin/Columbia-Greene Media A shot on goal hits the post as Chatham goalkeeper Haley Pulver dives in a save attempt during Wednesday’s Patroon Conference girls soccer game against Greenville at Greenville High School.

GREENVILLE — The Greenville Spartans took down the Chatham Panthers, 3-1, Wednesday evening, their second win against an unbeaten in three days. After improving to 6-0, the Spartans took sole possession of first place in the Patroon Conference as the 2020 season nears its end.

Spartan coach Eileen Kiefer thanked her replacements after not being able to be on the sidelines this week.

“Shout out to Alida Fabian and Wendy Ward for coaching the Lady Spartans,” Kiefer said, “for coaching a second game this week, while I am not available to coach this amazing group of young ladies.”

Greenville had scores from Ella Grupe, Emma Haller, and Melody Sprague on Wednesday, all of them in the first half. Taryn Silk added an assist to her stat sheet, and Spartan goalkeeper Chloe Ross had five saves.

Greenville had success early with an onslaught of offense in the first few minutes, and it paid off with a goal by Ella Grupe in the first seven minutes of game time, assisted by Isabella Trostle.

The Spartans would not slow down their approach in the slightest either, and the Panthers were on the defensive for most of the first half. The Chatham defense was up for the challenge though, and were doing everything they could to disrupt Greenville’s rhythm.

The Panthers managed to tie the game with a goal by Abby Taylor off of a deflection from a corner kick midway through the first half. Five minutes later, Greenville took the lead back after a diving save by Chatham keeper Haley Pulver left the opposite half of the net wide open for the Spartans to tap it in to make it 2-1.

Chatham had a scare afterwards, when the keeper took a chance on charging the Greenville striker, but the Spartans’ shot sailed high over the goal.

The Panthers’ passing ability and ball movement was on par with the Spartans throughout the contest, but their teammates cannot get into the passing lanes quickly enough to mount any formidable attack.

Greenville stayed aggressive before halftime, and scored off of a corner kick themselves, to extend the lead to 3-1 a few minutes before the half.

The second half was met with early scoring chances for the Panthers but they could not take advantage. Chatham was able to maintain their composure and kept the ball on the offensive part of the field. However, any offense that Chatham could muster, the Spartans would be right there to set the Panthers back a few plays.

The Panthers’ passing game finally came together in the second half, but it was far too late to use it to score goals. It was then, only a matter of time and an inevitability that Greenville got another hard fought victory in their second time facing another undefeated team in the same week, as they improve to 6-0 and take hold of the Patroon Conference.