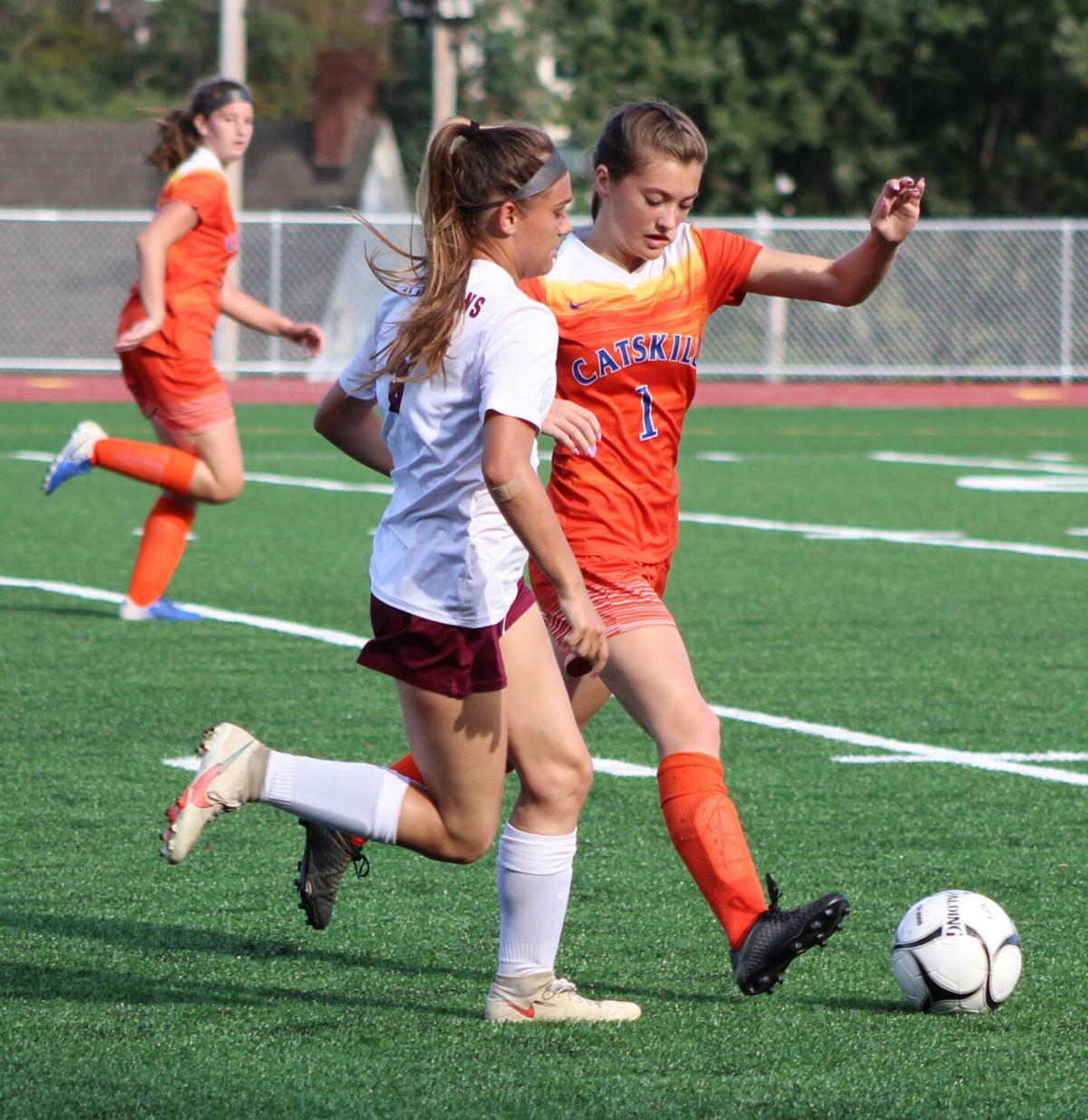 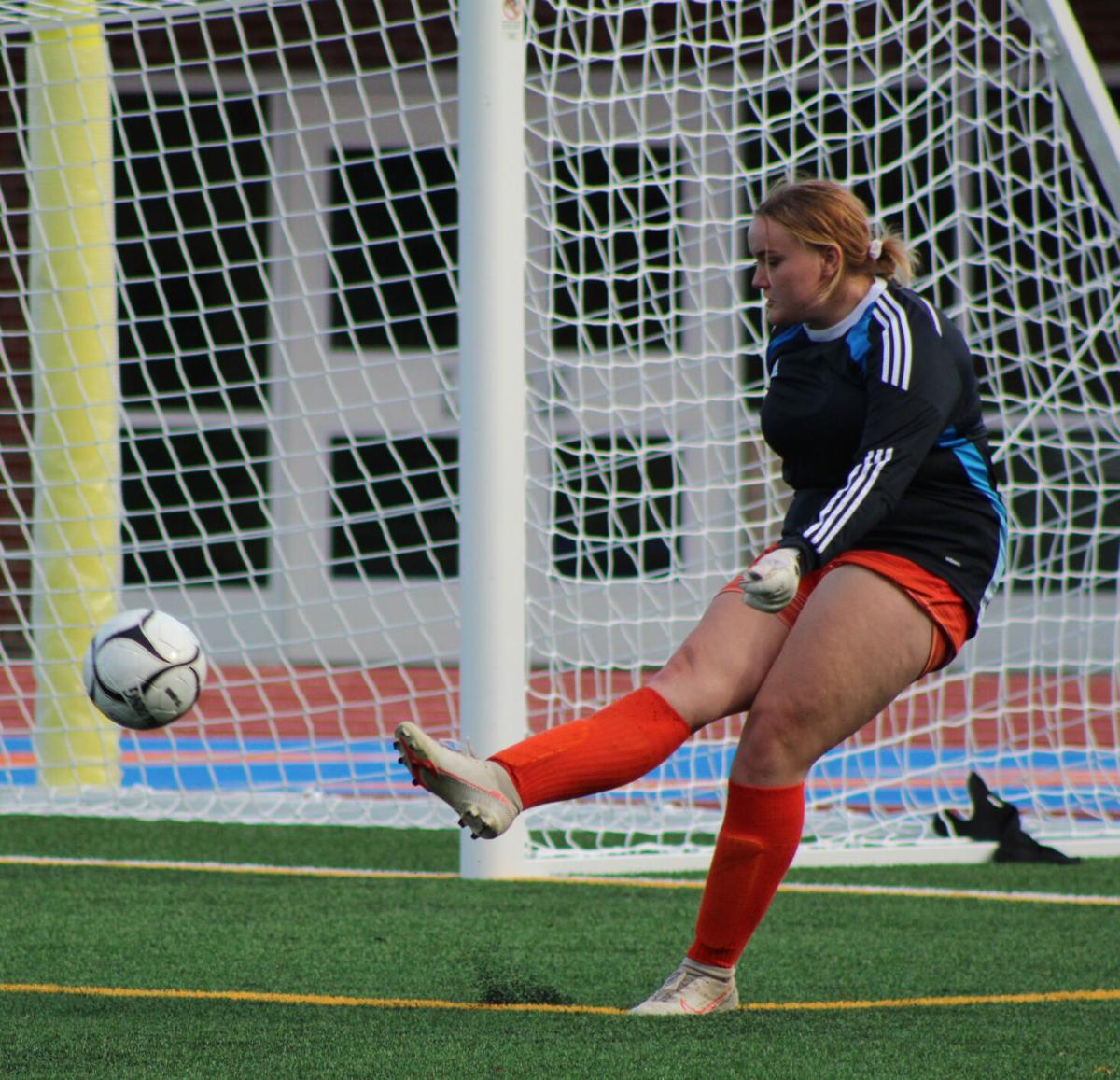 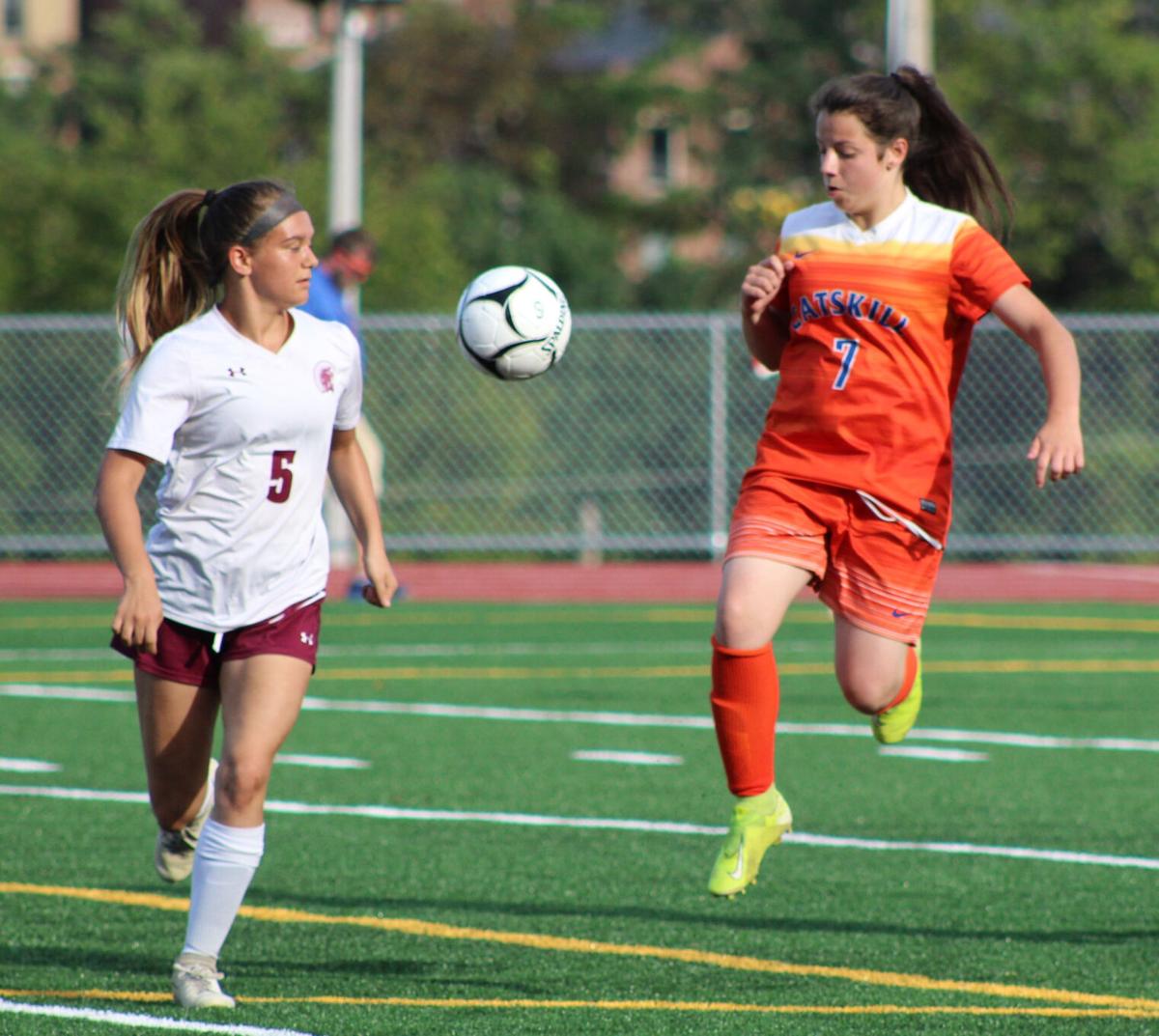 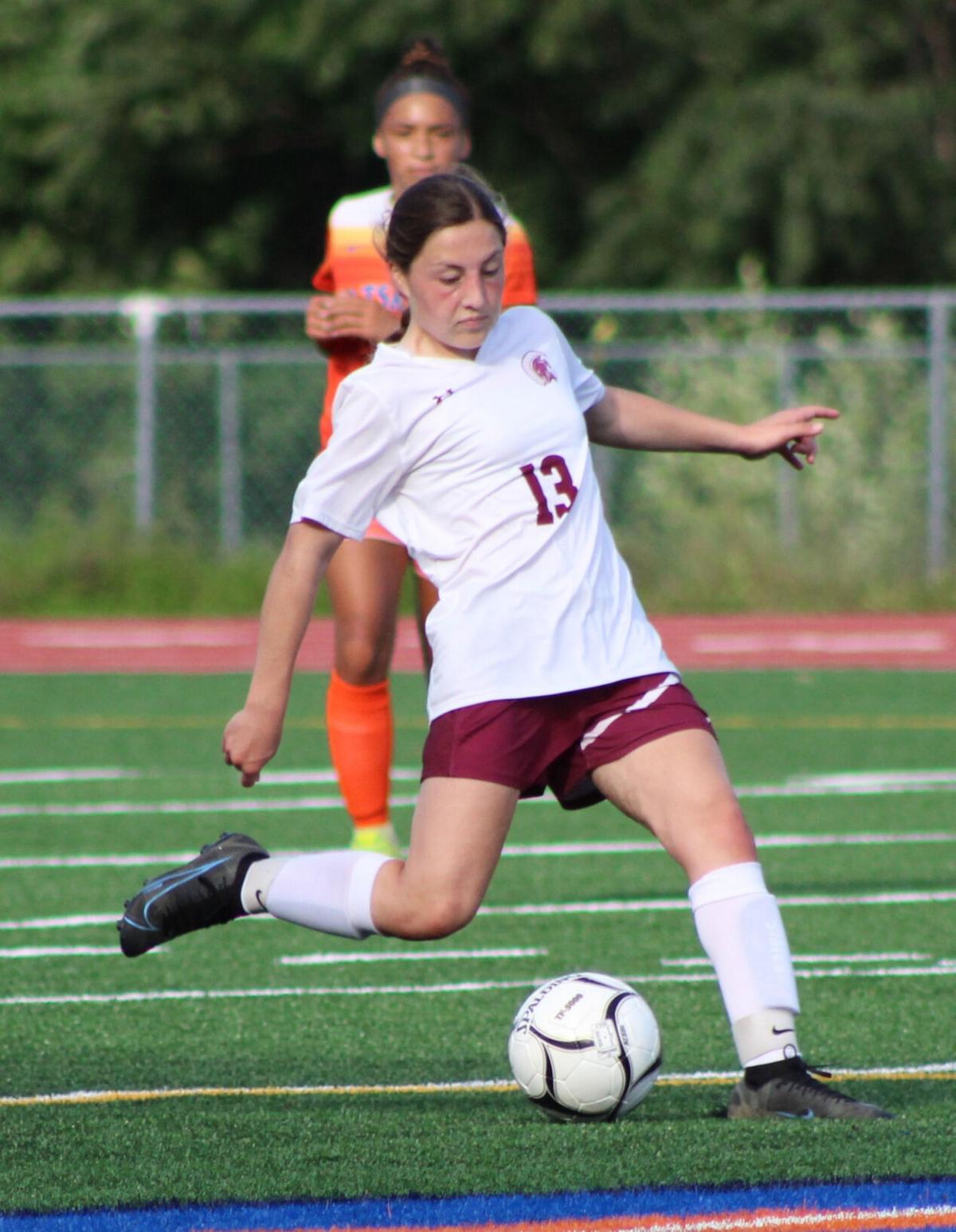 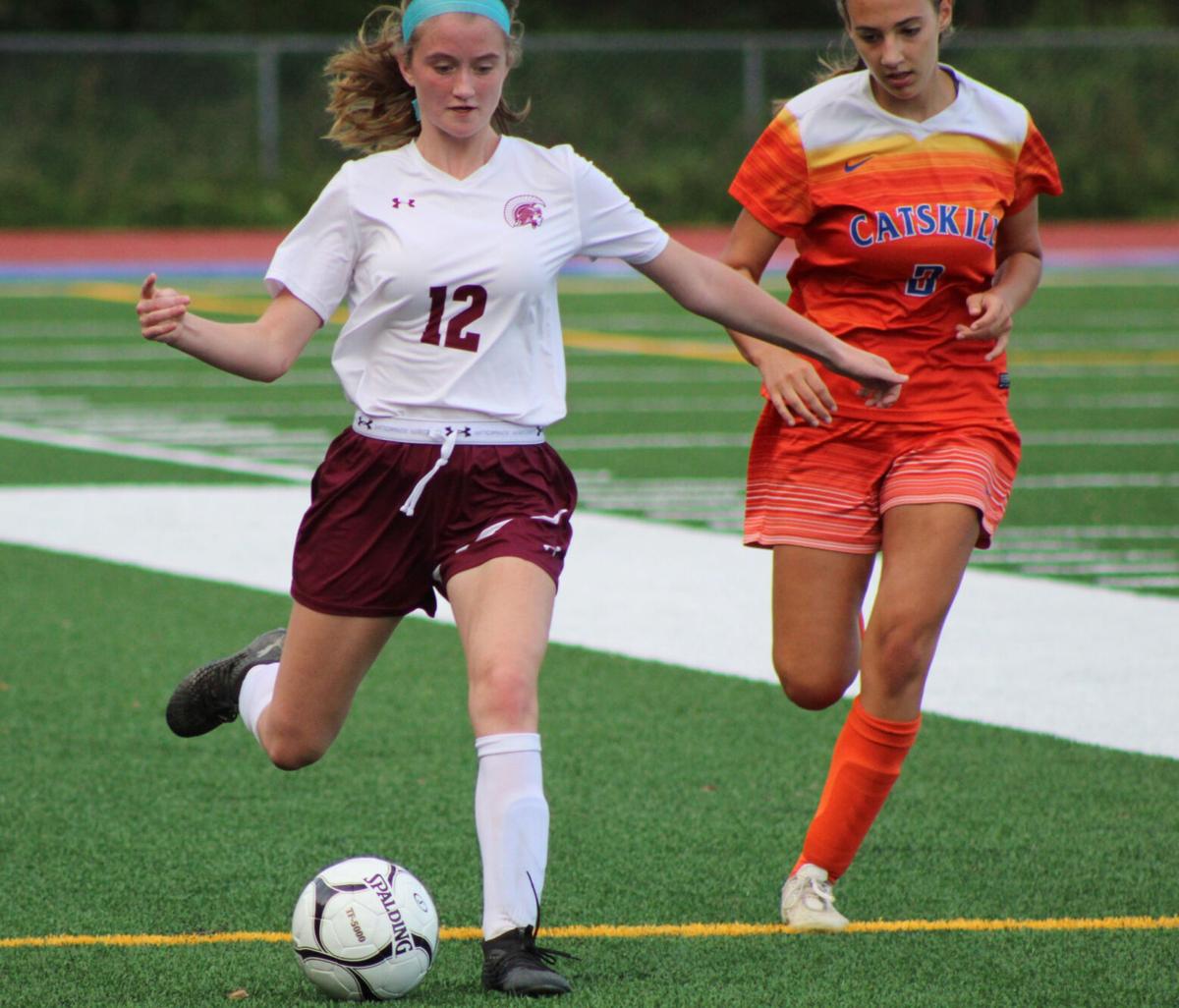 CATSKILL — The Greenville Spartans earned a road win over the Catskill Cats 5-0 in Tuesday’s late afternoon girls soccer match-up in the Patroon Conference.

Caroline Kosich scored a hat trick for Greenville, her teammates Ella Grupe and Ella Mulholland both scoring as well. With the Cats on defense for a good amount of the contest, keeper Kailey Abel had her hands full inside the box and made an astonishing 24 saves.

Catskill had trouble staying on top of the ball as the game started and Greenville was more than happy to take shots on the net when they were available. Kosich had a chance in the box early but Catskill’s Maddie Hallam caught up to her and knocked it away.

The Cats passed down the opposite way but had trouble getting their players up to help and they lost the ball. The Spartans had a huge breakaway chance but Emersyn Grupe’s shot was stopped by Abel.

The Cats needed to improve their passing to give themselves chances on offense, however the Spartans would always be there right in time to get the ball back before anything significant happened.

The Spartans were getting close themselves, Mulholland missing a picture perfect cross by teammate Taryn Silk. Shortly thereafter Greenville earned a corner kick, and Ella Grupe found the back of the net unassisted to give the Spartans a 1-0 lead.

After their first score Greenville attempted even more shots, but Kailey Abel blocked everything that came her way. With just seconds left in the half Kosich got a shot off and scored her first goal of the day thanks to an assist from Cameryn Childs to extend the Spartans’ lead to 2-0 at halftime.

Greenville came out strong at the start of the second half and in just a few minutes, increased their lead to 3-0 on Kosich’s second goal of the game, this one assisted by Ella Grupe. The Cats were still backpedaling as the Spartans kept their intensity high.

Catskill was also failing to clear the ball out of the box on a few plays and needed to do better to avoid disaster. Greenville would not let up however, and Ella Grupe tallied another assist when she found Kosich again for her third goal of the day, completing the hat trick. With the Spartans leading 4-0, they eased up on their attack a bit, but were not shy to pass up opportunities for even more shots towards the net to keep Abel on her toes.

Ella Mulholland eventually scored for the Spartans as well, their final goal of the game, on an assist by Piper O’Hare to stretch the lead to 5-0.

Time was running out for Catskill and they finally managed a corner kick in the closing moments but it went unsuccessful just a few seconds before the referee blew the final whistle. The Greenville Spartans were victorious 5-0 on the road over the Catskill Cats to start the week.

Both teams will be back in action on Thursday with Greenville in Cairo-Durham and Catskill in Taconic Hills.