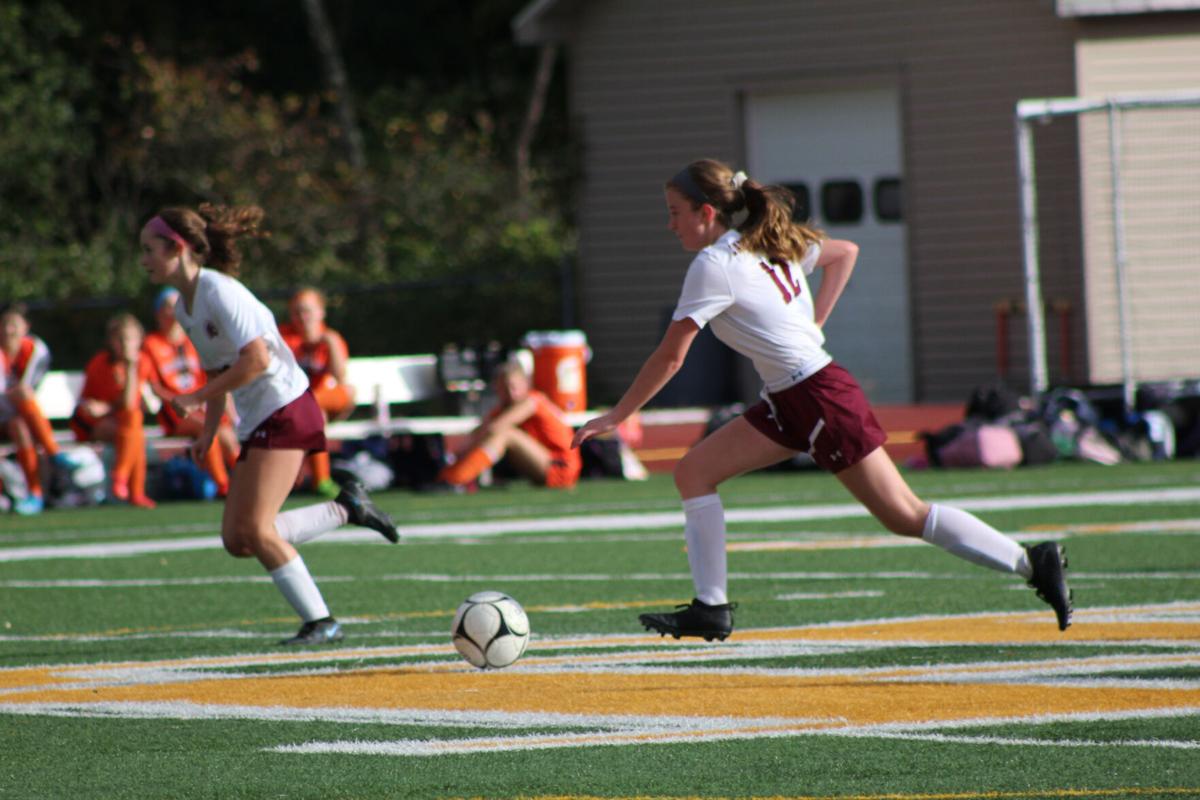 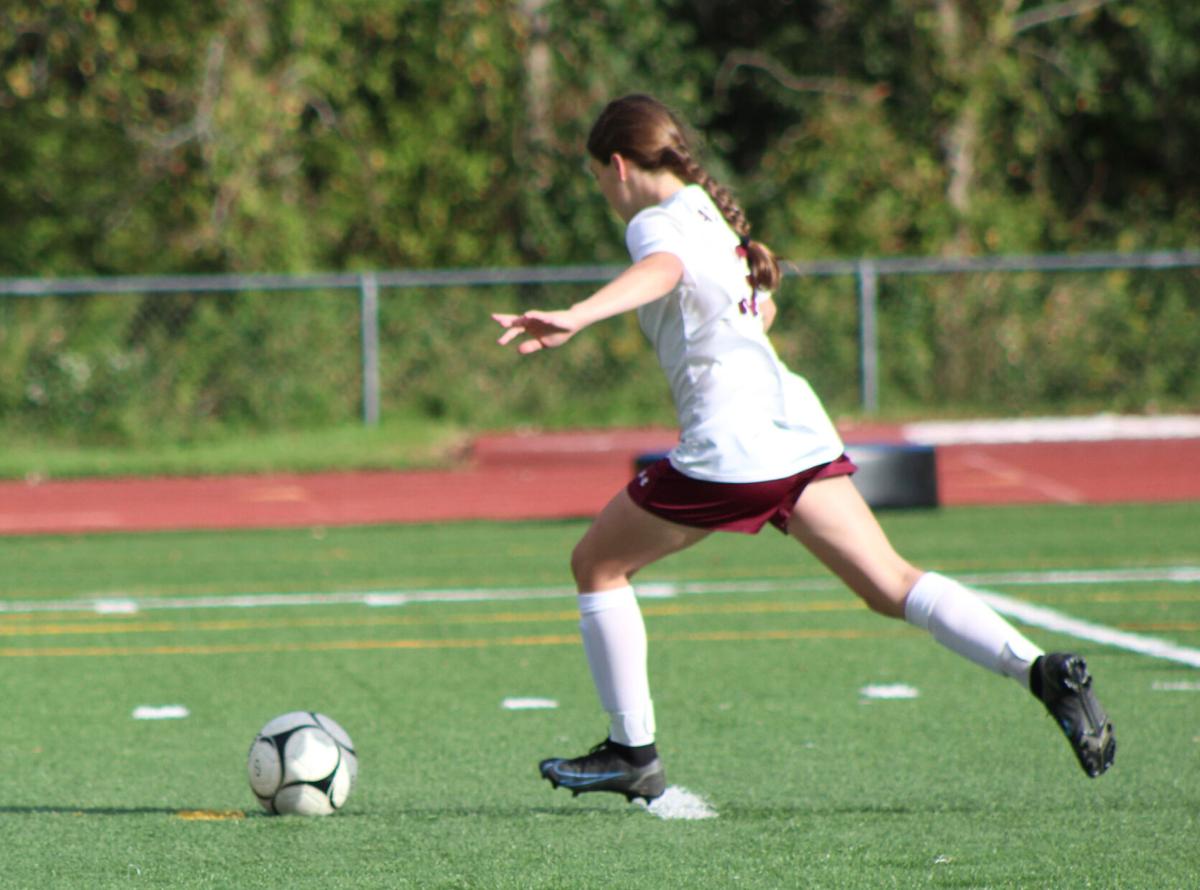 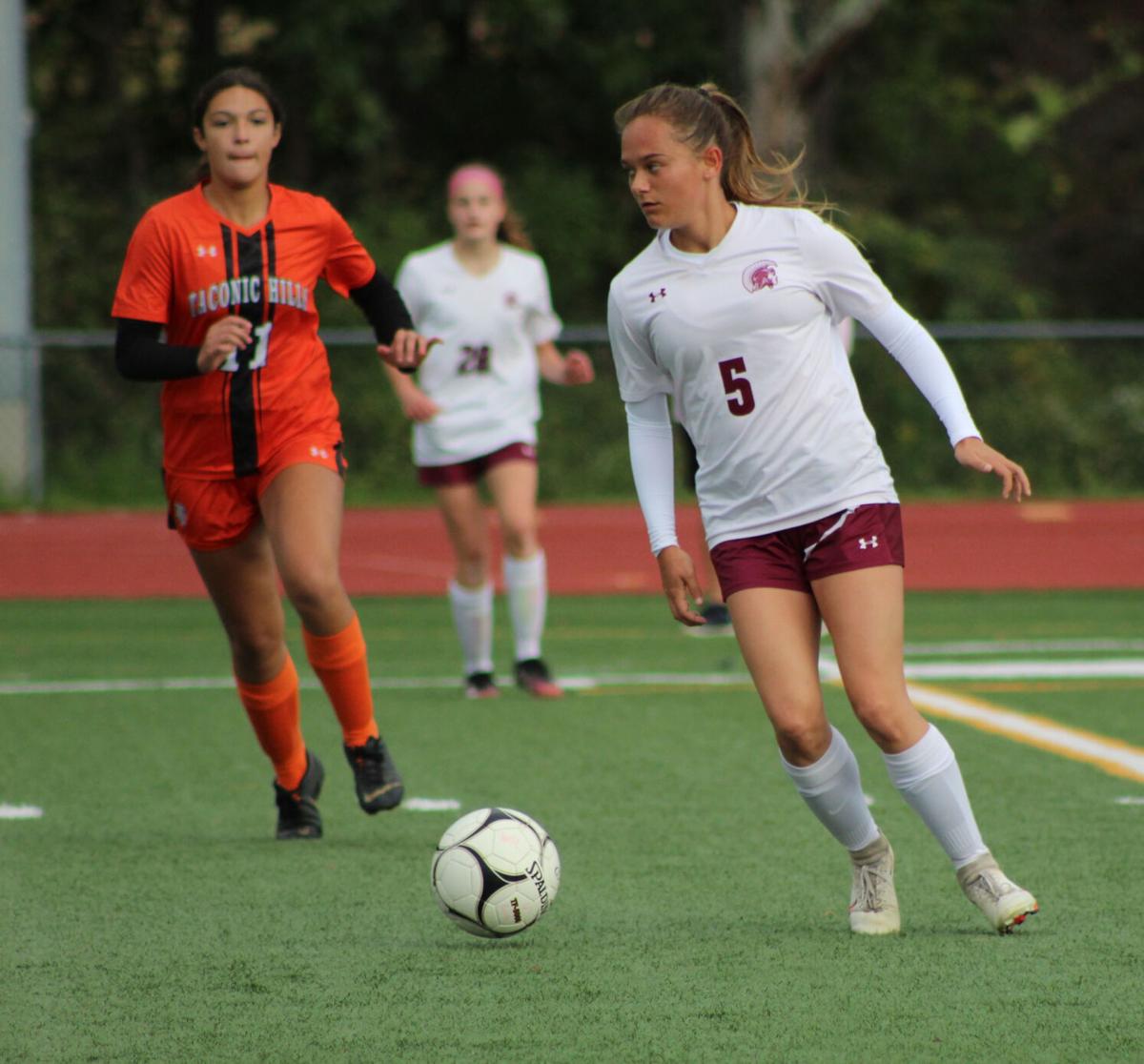 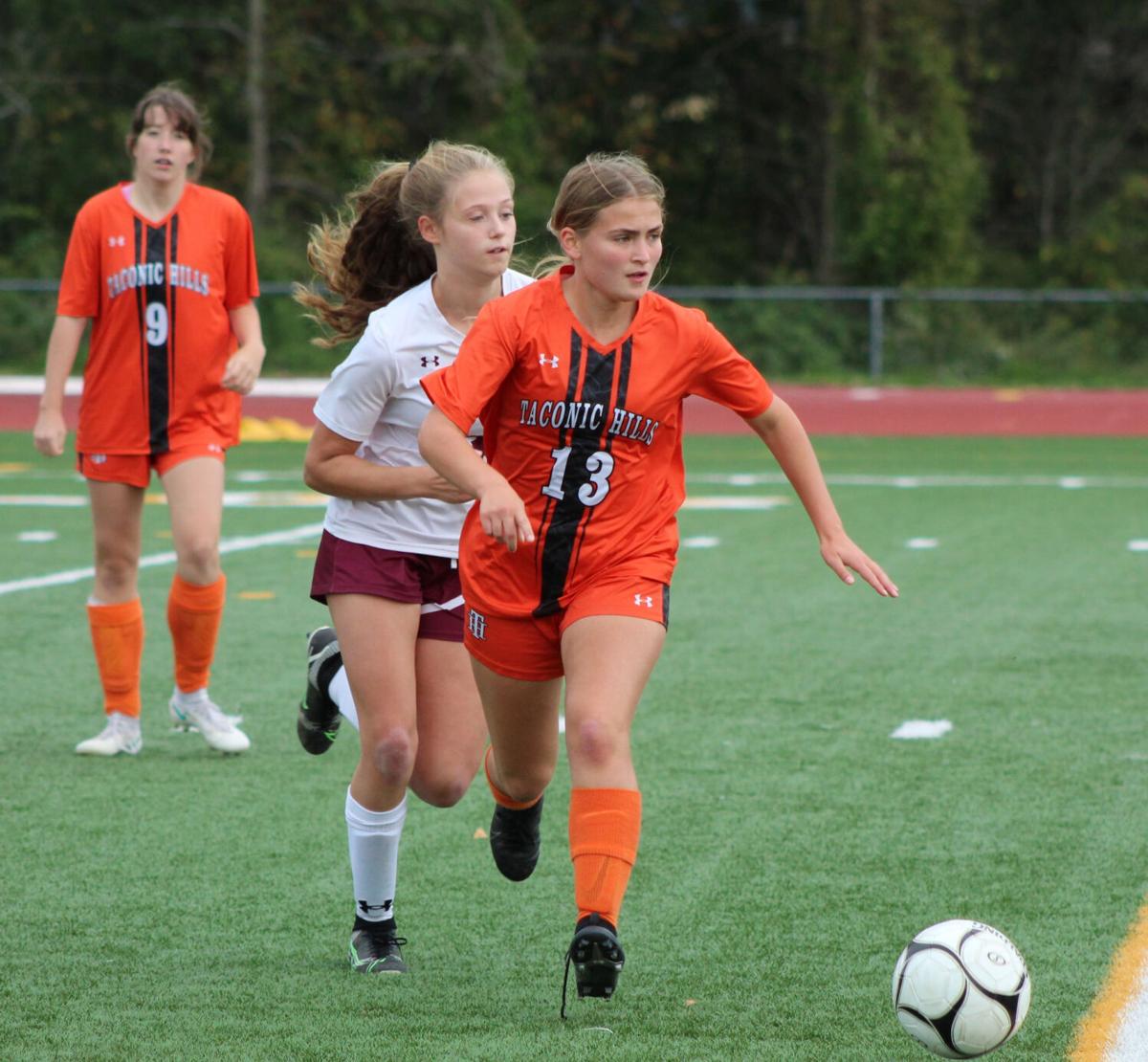 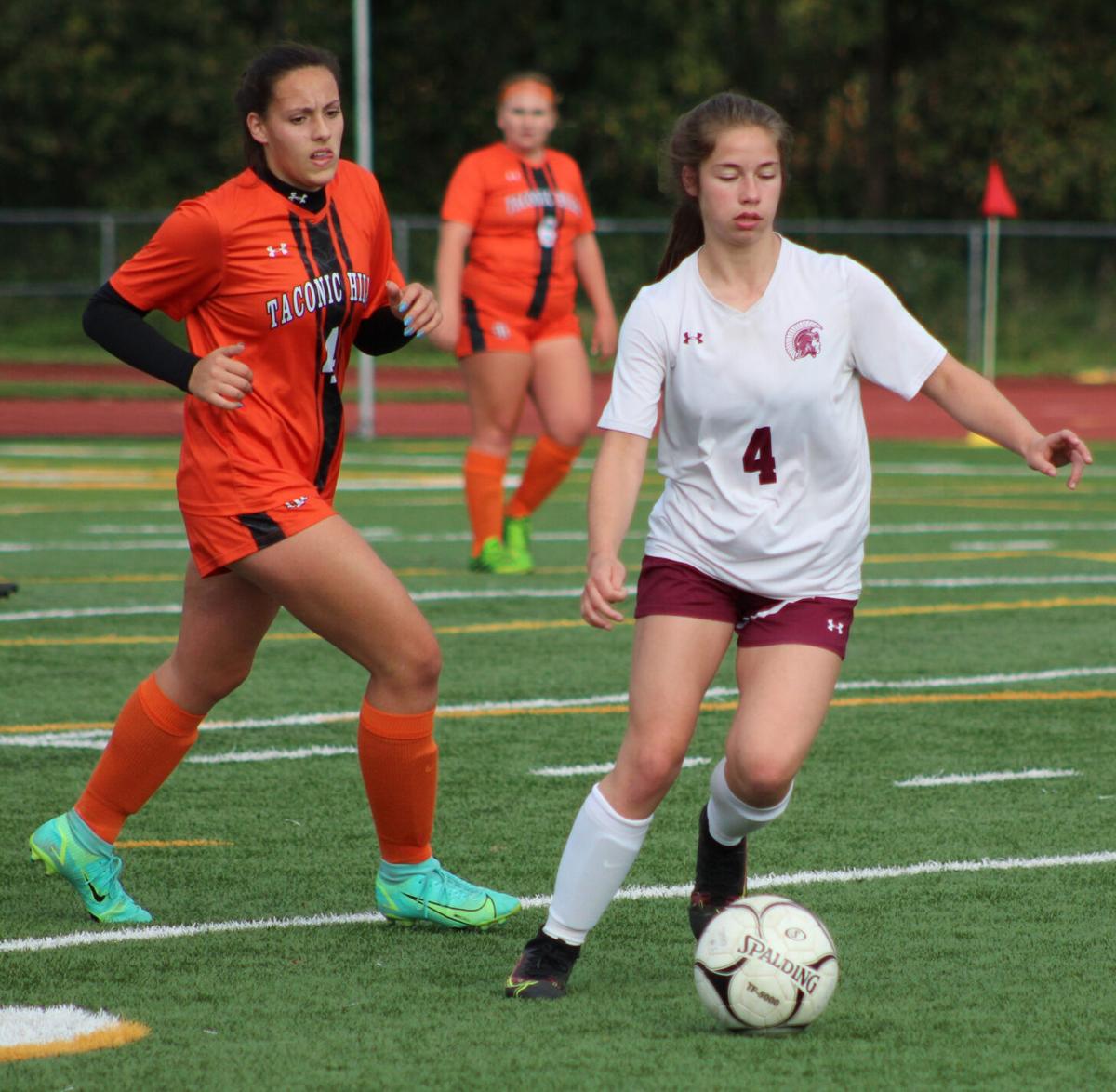 CRARYVILLE — The Greenville Spartans earned a 4-0 Patroon Conference girls soccer victory on the road at Taconic Hills over the Titans on an overcast Wednesday afternoon.

The Lady Spartans extended their undefeated streak to 10-0 so far in the 2021 season as they sit atop the Patroon Conference. Greenville’s offense was led by Ella Grupe with two goals, and Julia Slater and Emma Haller with one goal apiece.

Within the first two minutes of game time the Spartans already had a chance near the goal when Cameryn Childs crossed the ball in front but it was knocked out for a corner. They earned another after the first corner kick was ineffective and Ella Grupe took advantage, finding the back of the net for the first score of the game.

With the score 1-0, the teams traded breakaway chances that included Greenville missing a wide open net with the play moving too quickly. The Titans’ defense did a better job playing up and interrupting the Spartans’ passing lanes over the next few minutes, yet it did not lead to opportunities on offense.

A corner kick taken by Ella Grupe soon thereafter was caught by Titans’ keeper Mikayla Silvernail who was very busy in the box all game. Despite Taconic Hills’ efforts, Greenville stole possession almost at-will and worked the ball upfield with ease.

On one of those Greenville takeaways, Julia Slater scored off of a pass from Ella Mulholland to get the lead to 2-0 for the Spartans. Minutes later after another Greenville corner kick was cleared out, a handball was called on Taconic Hills inside the box and the Spartans were awarded a penalty kick.

Ella Grupe stepped up to take the shot, planted her cleat, and buried it into the back of the net for her second goal of the afternoon. This widened the Spartans’ lead to 3-0 with over 20:00 to go in the first half.

Emma Rose Merchant later caught a break for the Titans and took the ball up the sideline for almost the length of the field before a defender picked her up and forced it out, but Merchant earned a corner.

The corner kick did not bear fruit for the Titans and the Spartans capitalized on the spacing and got another shot on net all the way at the other end. The Titans cleared the ball out of the box once again as the clock dwindled and at last it reached halftime with Greenville still ahead 3-0.

Out of the break, Greenville stayed aggressive and afforded themselves multiple shots on goal in just the first couple of minutes into the second half. Spartan Emersyn Grupe passed it across the box on one play for teammate Emma Haller but Haller whiffed on the shot and the ball rolled away.

The Titans had an opportunity to make a run but the team was too far back after being on defense so long that they could not get downfield to aid the strikers. This was a theme that would continue for Taconic Hills the rest of the way.

The Spartans continued with chance after chance in the box and it was only a matter of time before they scored again. Haller received another few passes perfectly in the box like the previous one from Grupe, but she missed another two golden opportunities in front.

With 10:00 to go in the game, the Titans still failed to clear the ball far enough for their attackers to mount any offense, and their conservative goal kicks were detrimental to their defense because the Spartans would take the ball right away and be in scoring range immediately.

Haller profited from another chance in the box from Greenville as they soon took another corner kick, and she deflected it into the goal on a picturesque header to score Spartans’ fourth goal of the game.

Greenville was content with the 4-0 score and milked the clock until it hit zero and they earned their tenth straight victory, improving to 10-0 with the afternoon win at Taconic Hills High School.