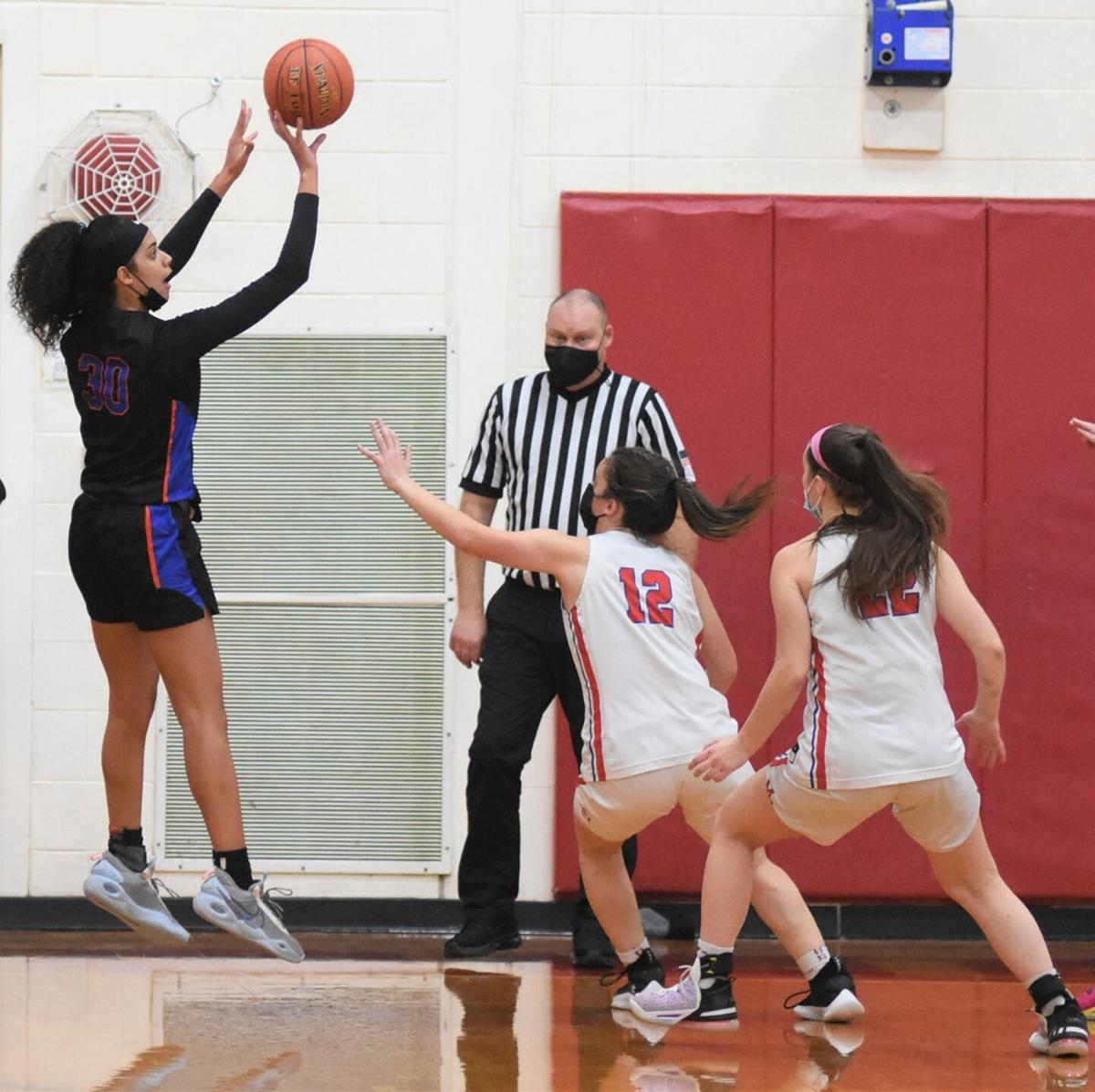 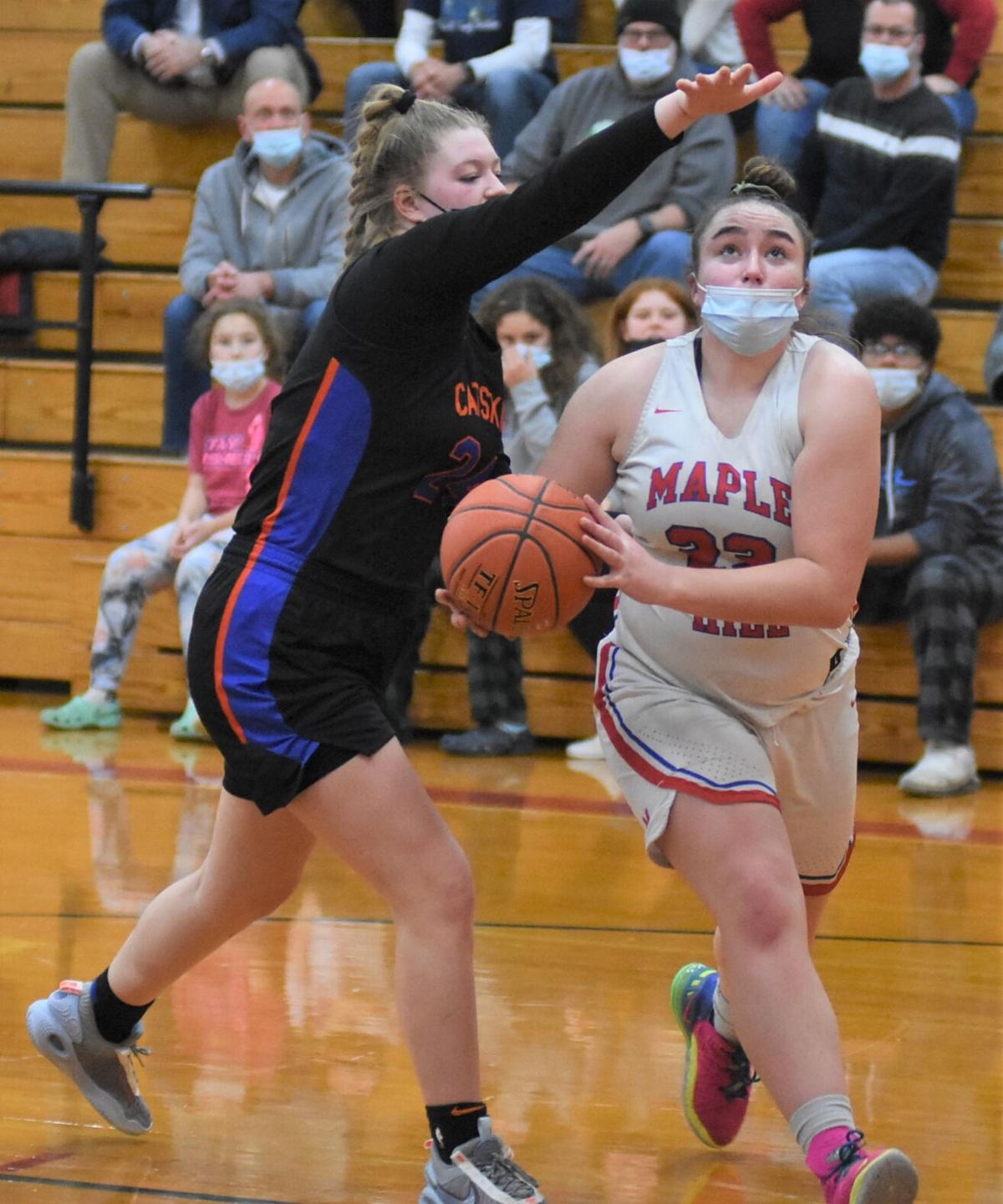 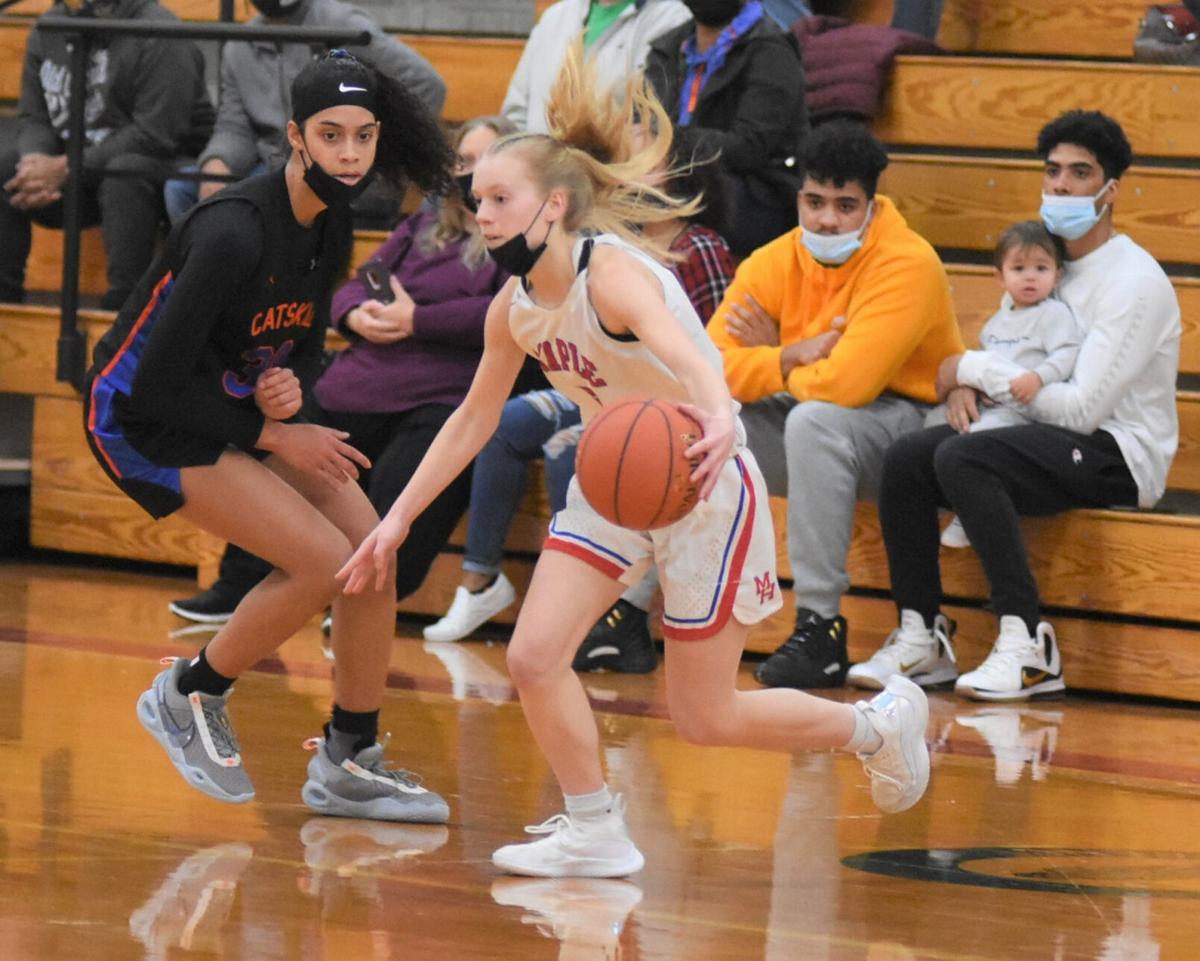 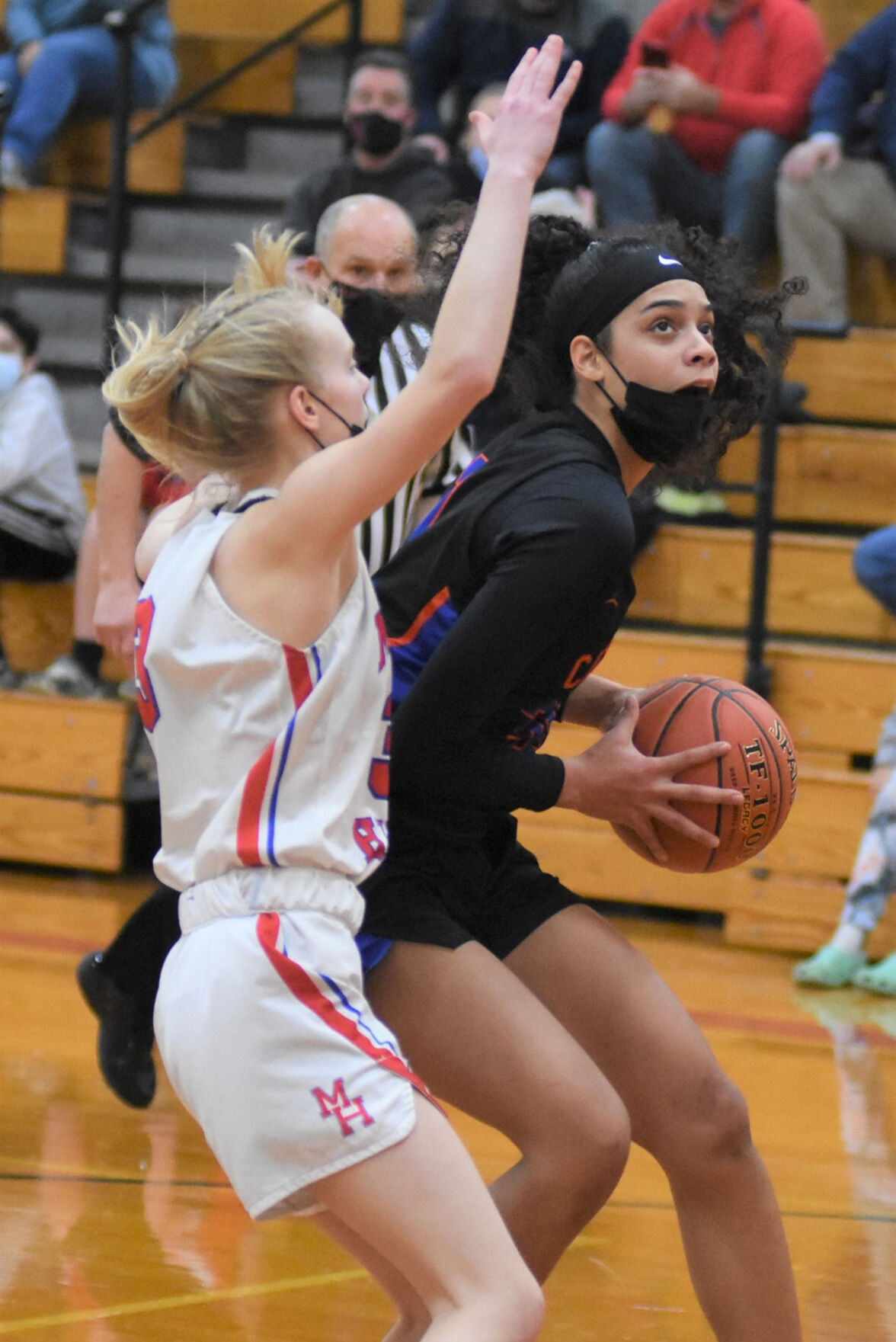 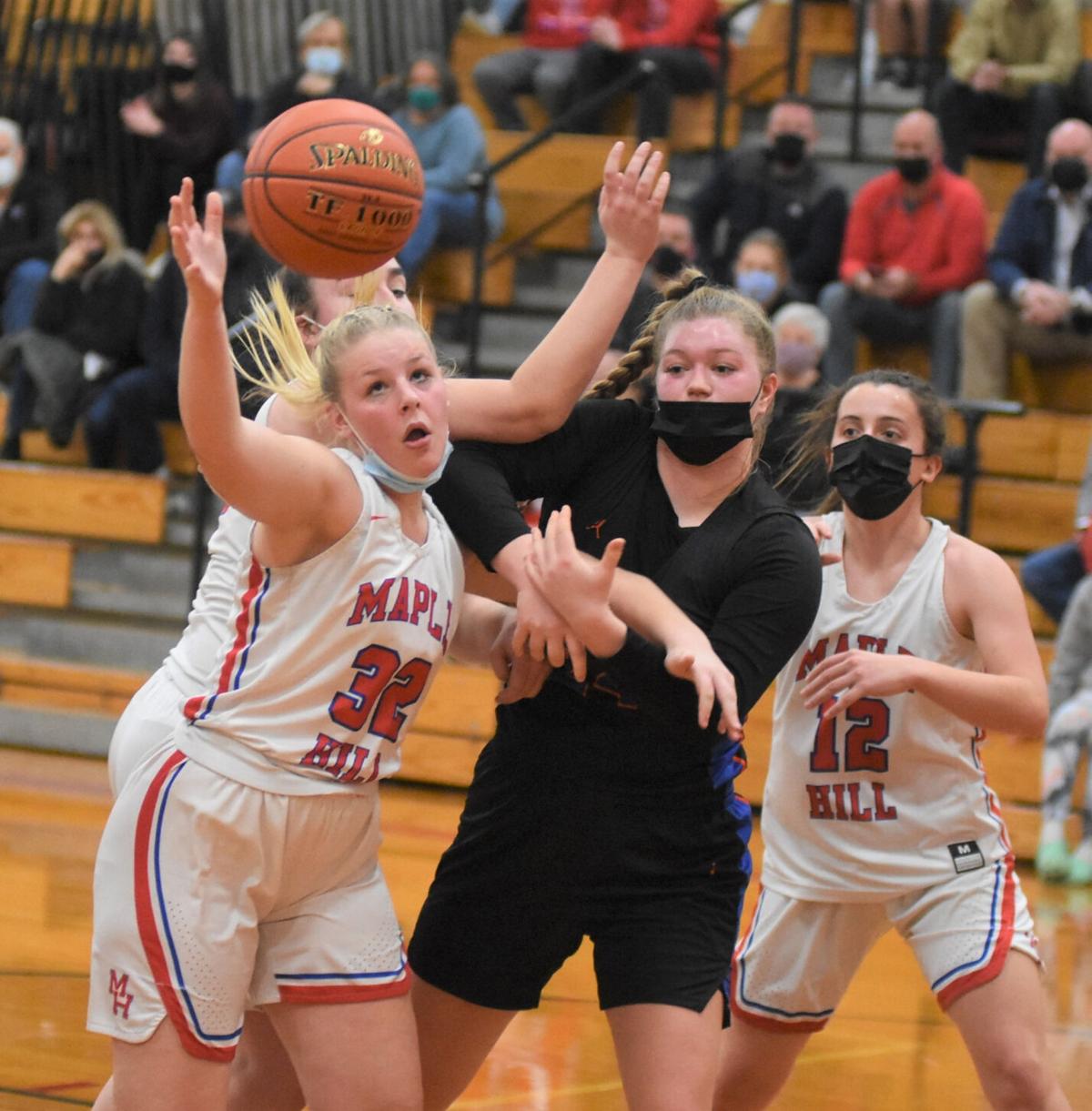 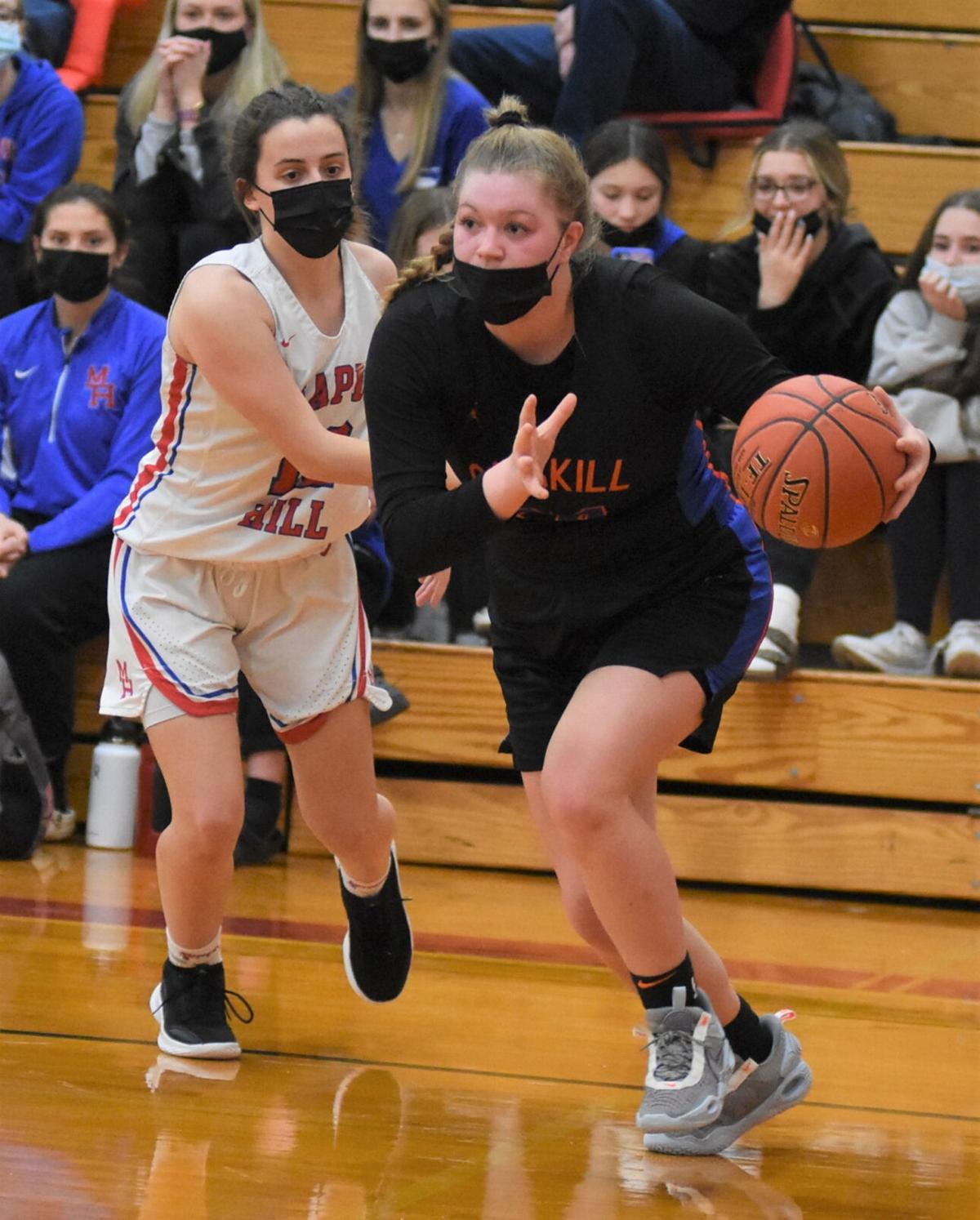 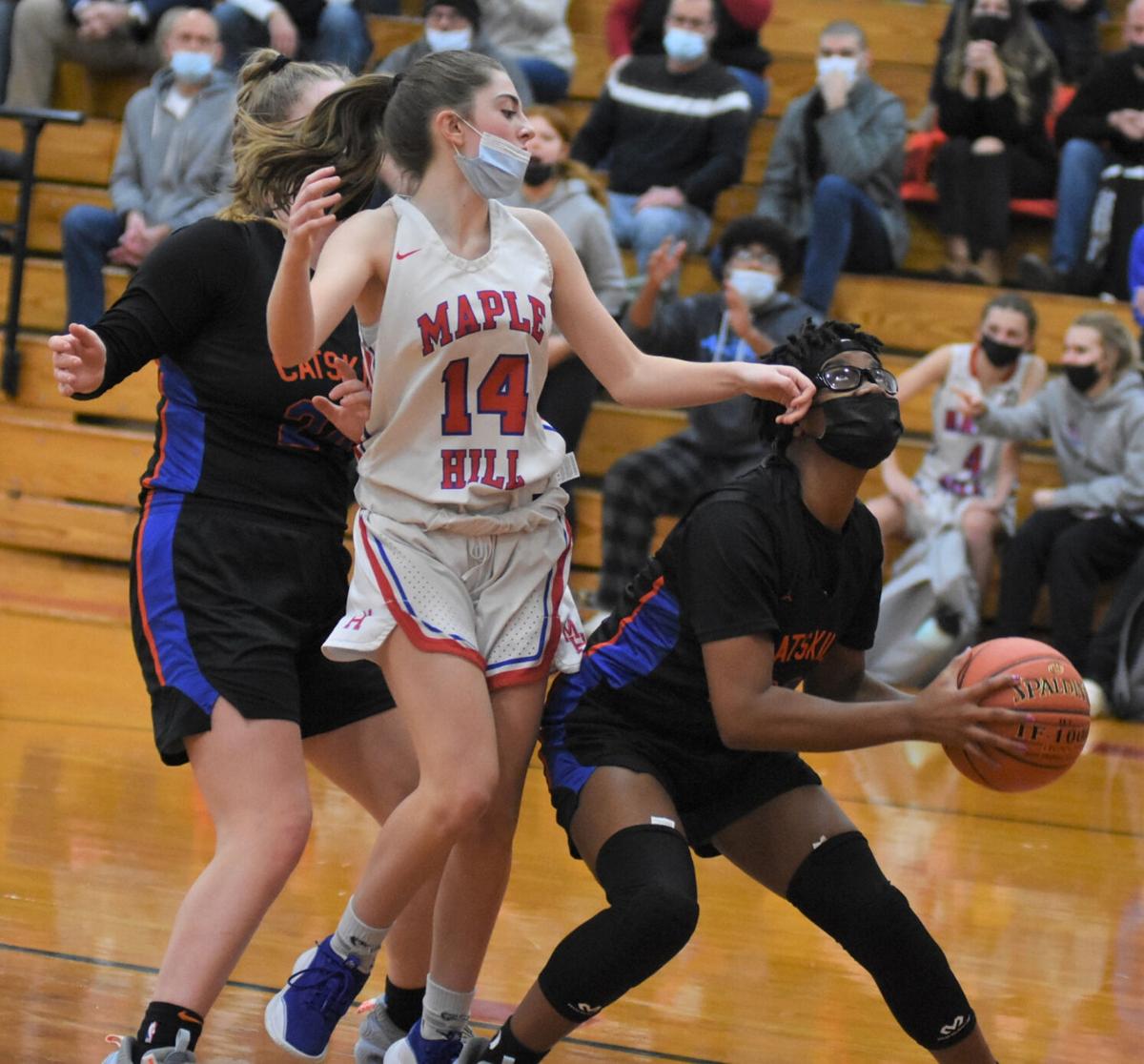 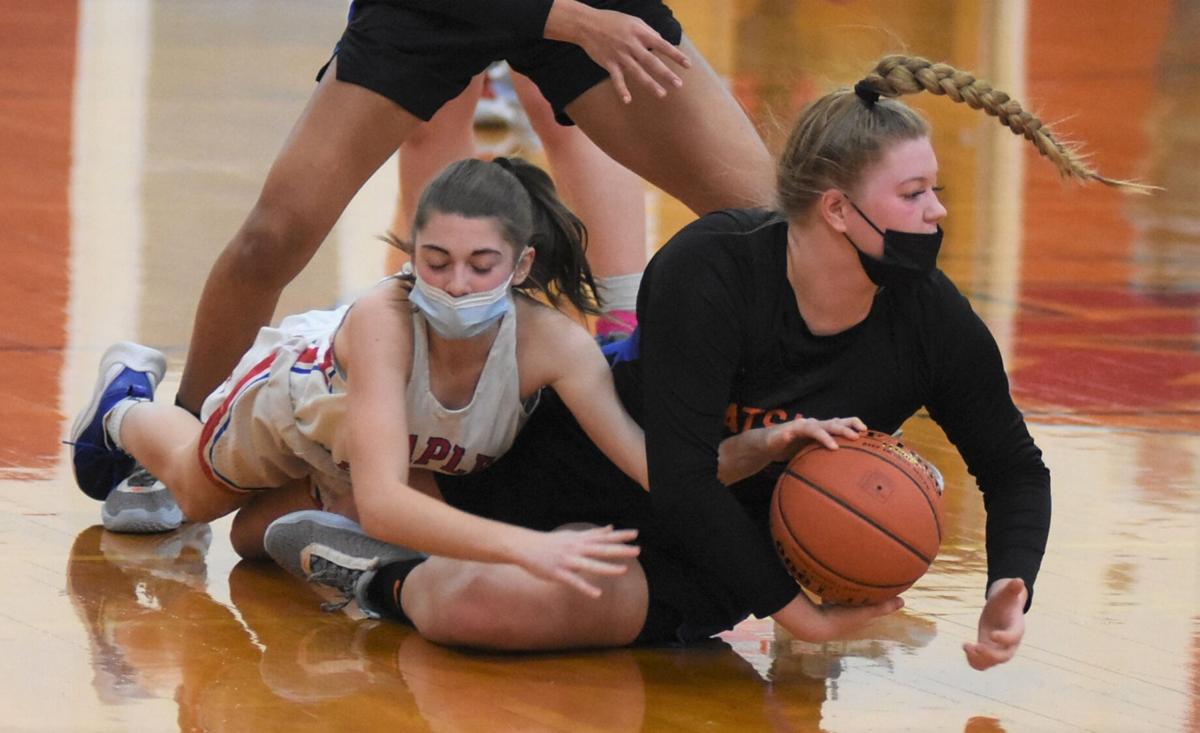 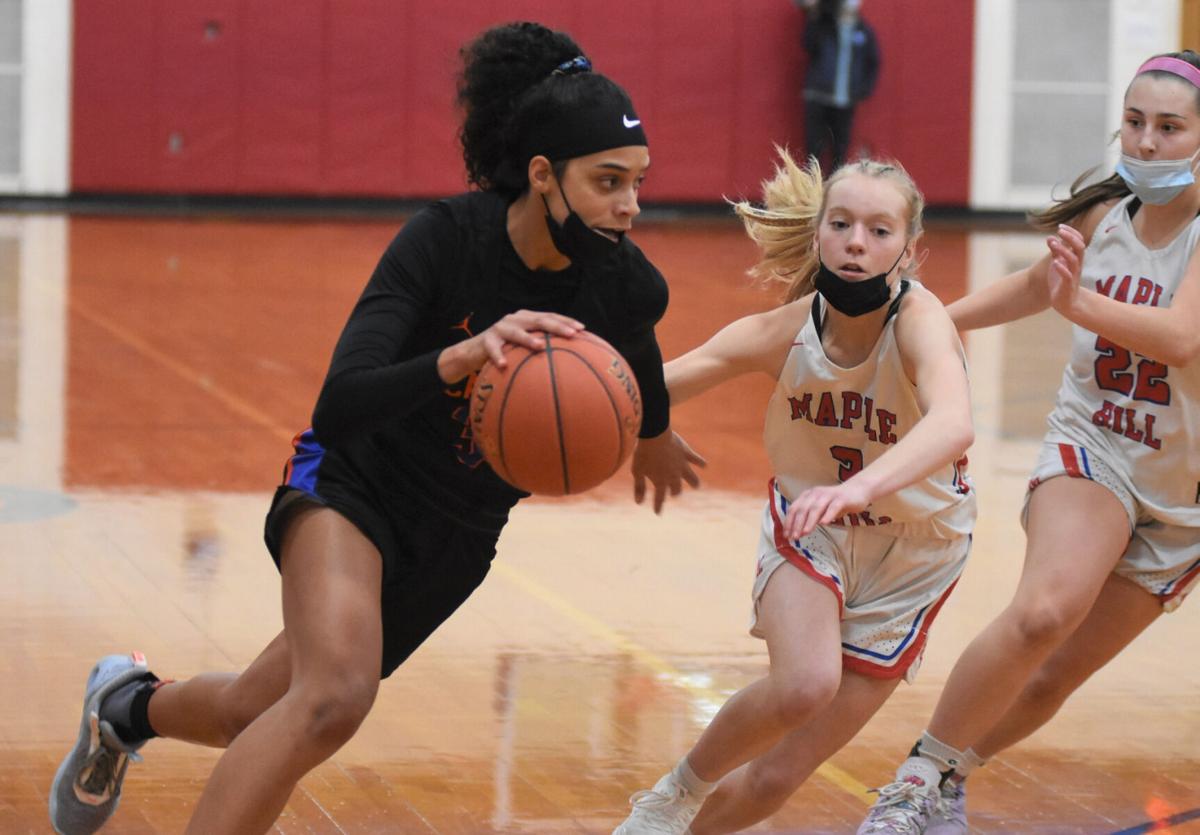 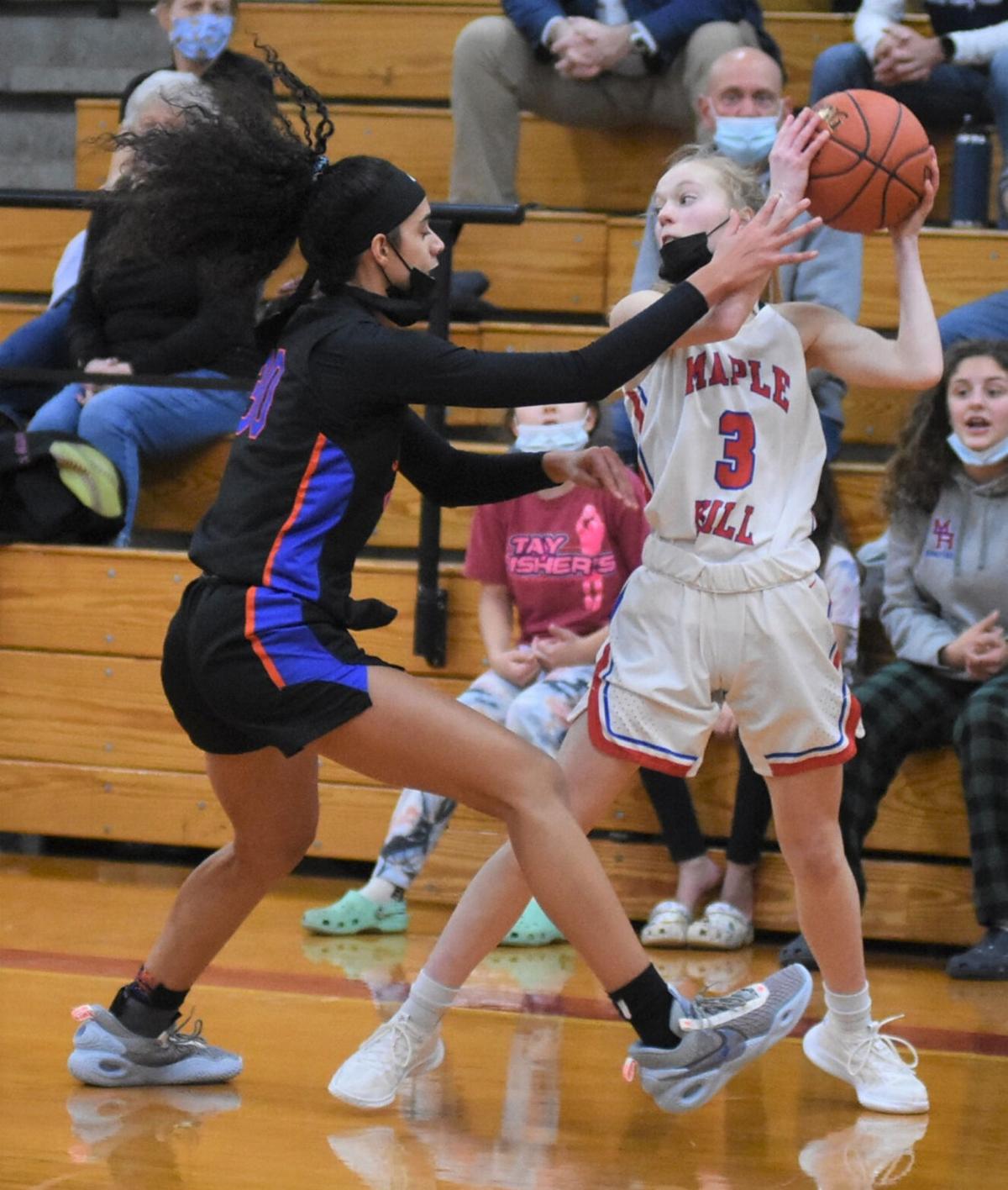 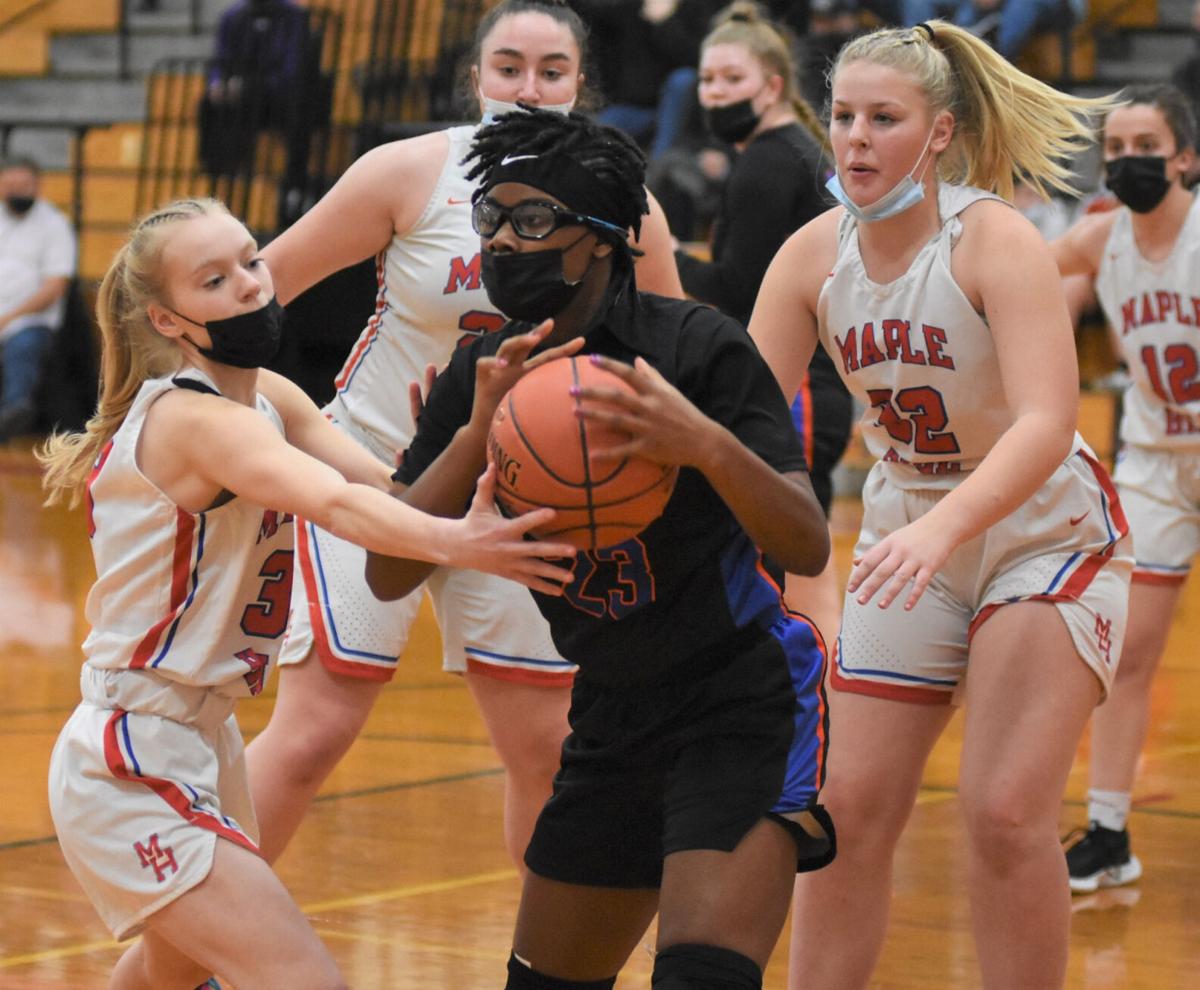 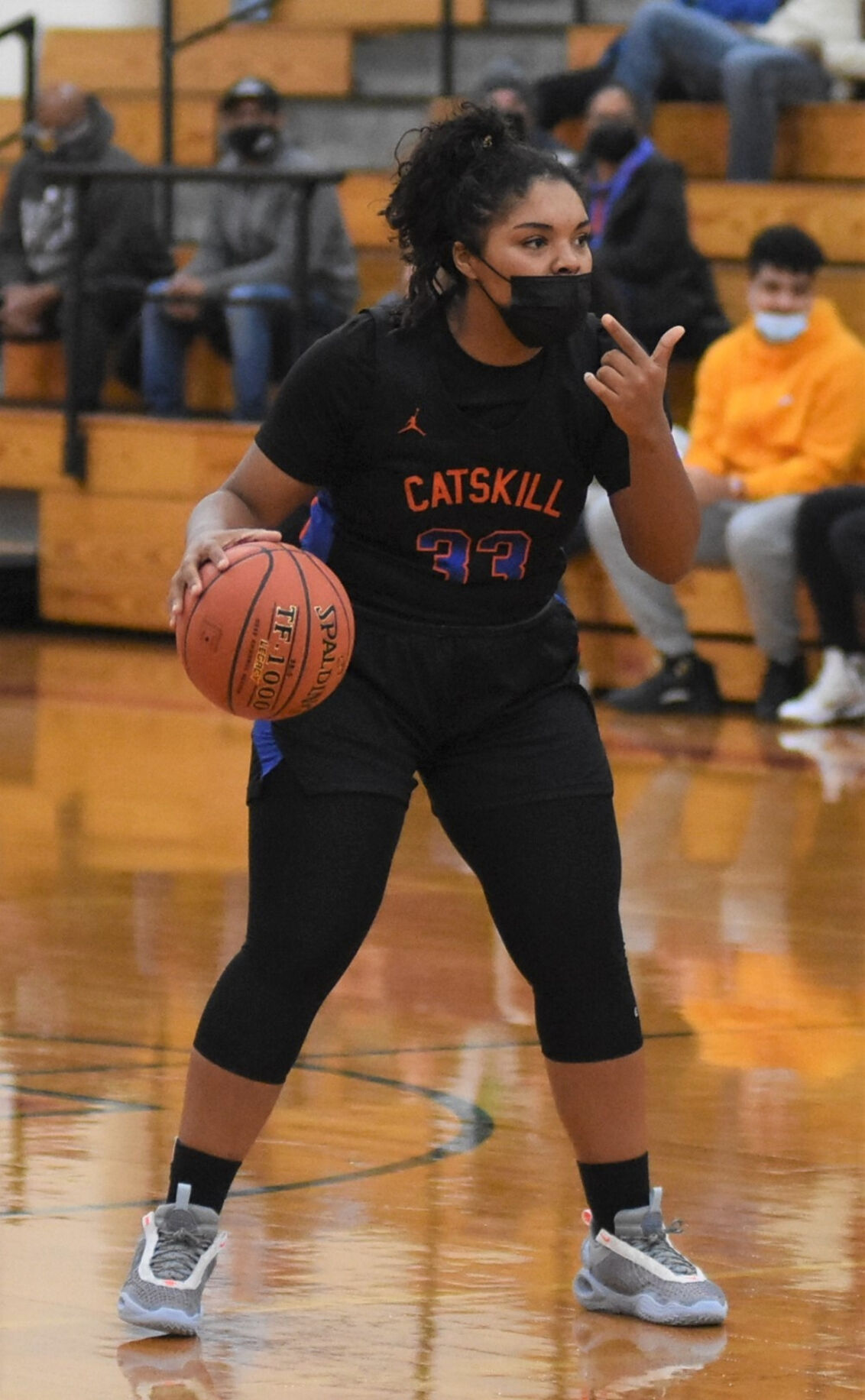 CASTLETON — Catskill is the only unbeaten team remaining in Patroon Conference girls basketball after handing Maple Hill its first loss of the season on Friday, 47-36.

Catskill improves to 5-0 in conference play (6-0 overall), while Maple Hill falls to 5-1 in the Patroon.

Maple Hill came out determined to keep Catskill’s high-scoring Janay Brantley in check and the Wildcats did hold the Cats’ standout junior to 12 points below her season’s average. Brantley still scored 21 points to go along with 15 rebounds, eight steals and five assists.

With the Wildcats focusing on shutting down Brantley, Hannah Konsul and Ava Edmond stepped up in a big way for the Cats. Konsul had 13 points and 13 rebounds, while Edmond scored just one bucket, but was a terror on the glass, pulling down 17 rebounds.

“We knew Maple Hill played very disciplined defense,” Catskill coach Chris Quinn said. “We knew they were going to wall Janay up, but I told her she’d have to force the effort a little bit and the other girls have to get to their spaces. Hannah Konsul had a big game and positioned herself to get a lot of rebounds and my freshman, Ava Edmond, was huge tonight and got the spaces.

“Our defensive effort, we came out and played man and knew that we could probably defend them and make them work hard and we did. These girls just gave a heck of an effort.”

The Cats had to fight through adversity from the start as Jayden Lewis injured an ankle while scoring a basket seven seconds into the game and did not return.

“We finally execute our tip ball play for a basket and she comes down and rolls her ankle,” Quinn said. “As it stands right now, she’s my second leading scorer and we didn’t have her, but the other girls stepped up. I’m proud of them. Very proud of the effort tonight.”

“We knew coming into this game we had to put everything into it so we knew when Jayden went down we knew we all had to put in the effort and everybody needed to contribute, even though there were only five of us,” Konsul said.

Catskill led 11-4 after the first quarter of play and 21-12 at halftime. Maple Hill narrowed the gap to 28-22 heading into the final quarter, but the Cats finished strong, outscoring the Wildcats, 19-14 over the final eight minutes to clinch the victory.

A key to the win was Catskill’s ability to dominate in the rebounding department.

“The last couple of days in practice we worked on getting to the glass,” Quinn said. “I told them, we’re probably going to win this game on second-chance points.

“Janay didn’t have a great night shooting the ball, but I told her I wanted her to take those tough shots and get the ball up on the glass because with no shot we have no chance to get the putback.”

“We played as a team and we did what we needed to do,” Konsul said. “I knew this would be a big game so I put everything into it.”

“Two of the best teams, we played hard, we competed and you have to give respect to Catskill,” Maple Hill coach Michael Oliver said. “They’re a great team and have a lot of great players. I was just happy that my team was able to come out and perform the way that they did.

“This was a great challenge for us and it’s something that we can work on and look at the film and get better and continue to compete. I’m always happy when the girls come out and compete. They left it on the floor and that’s all you can ask for.”

Erin Madsen had 13 points for the Panthers, who have won five straight after a season-opening loss to Maple Hill.