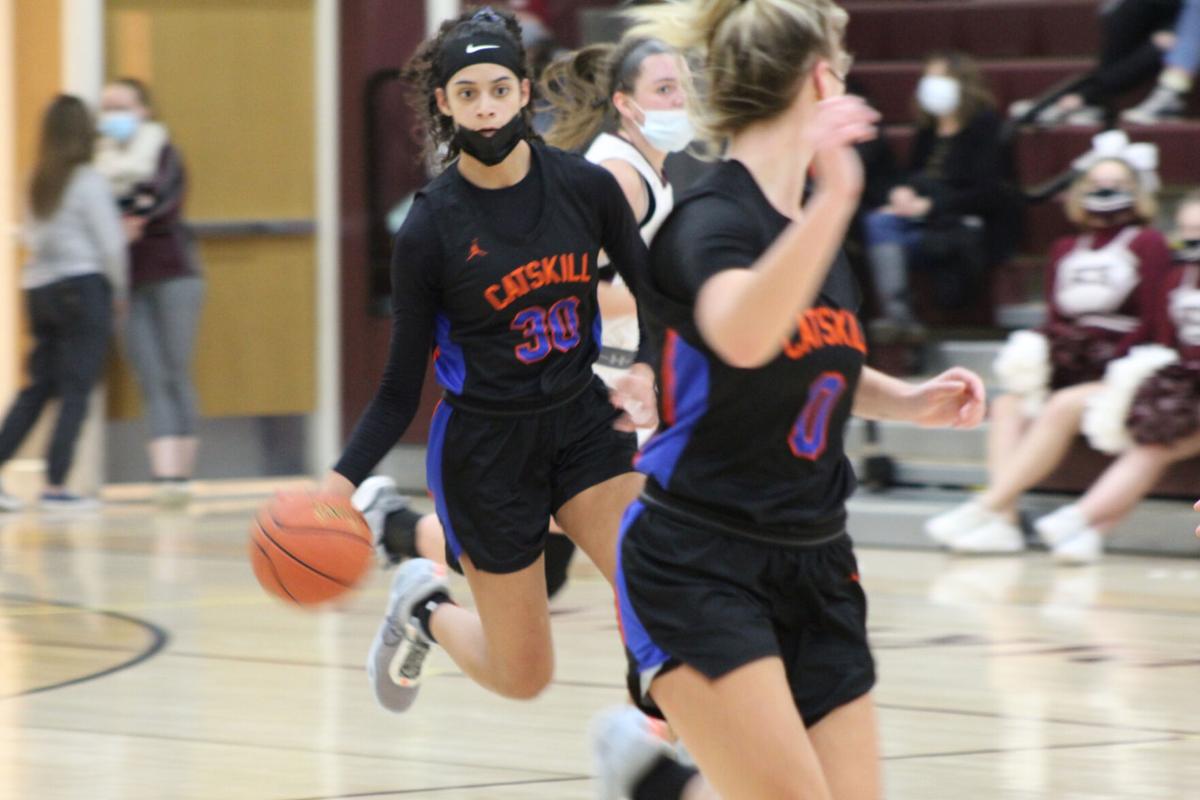 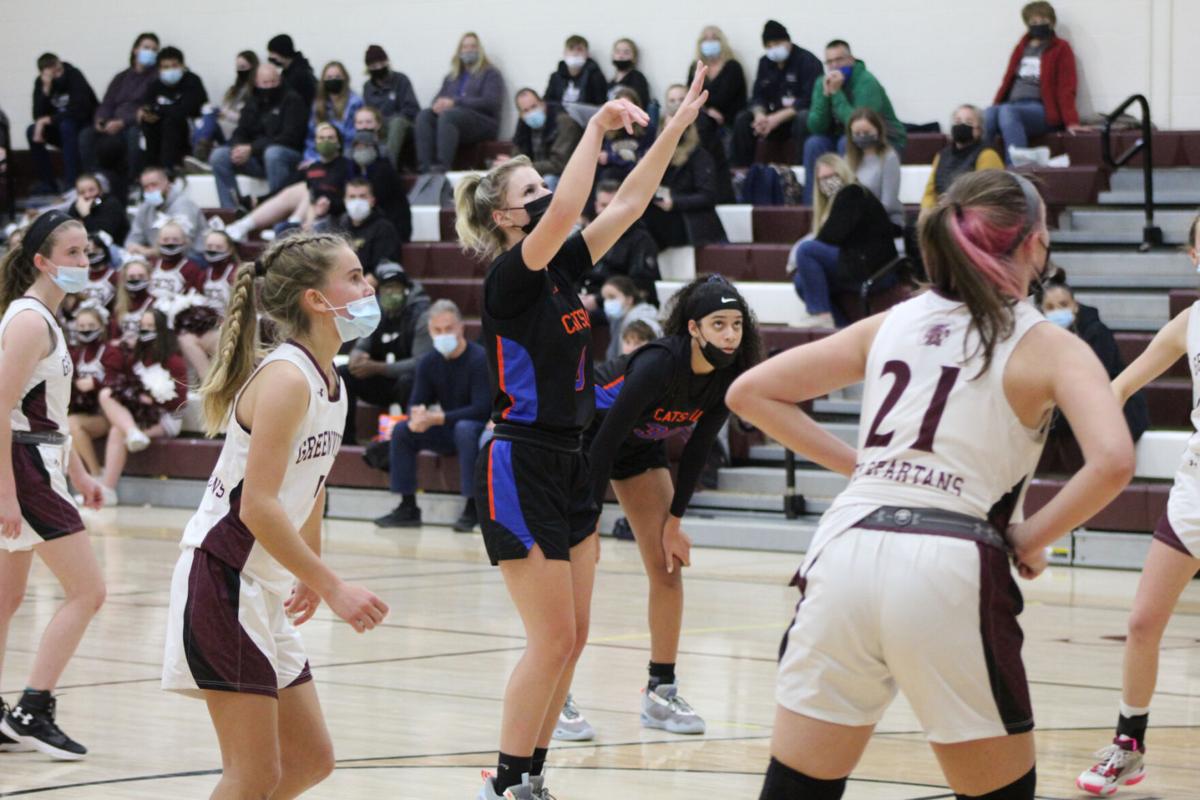 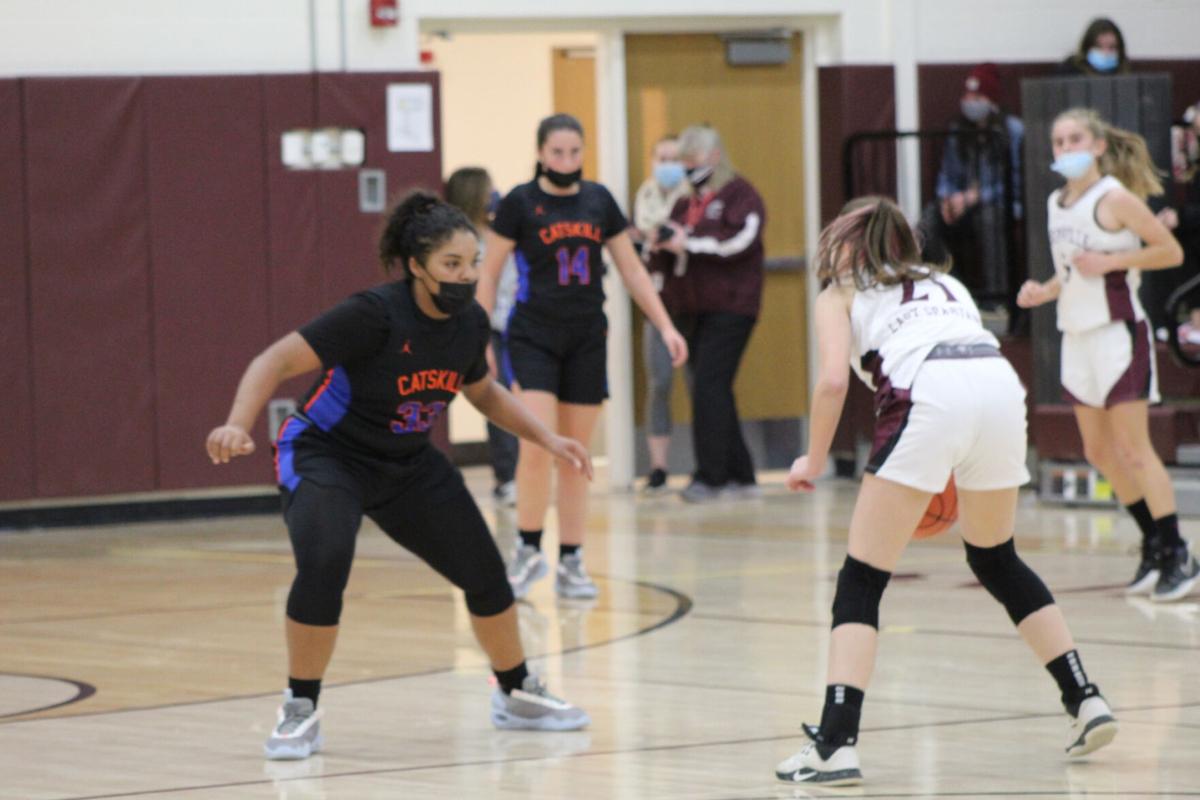 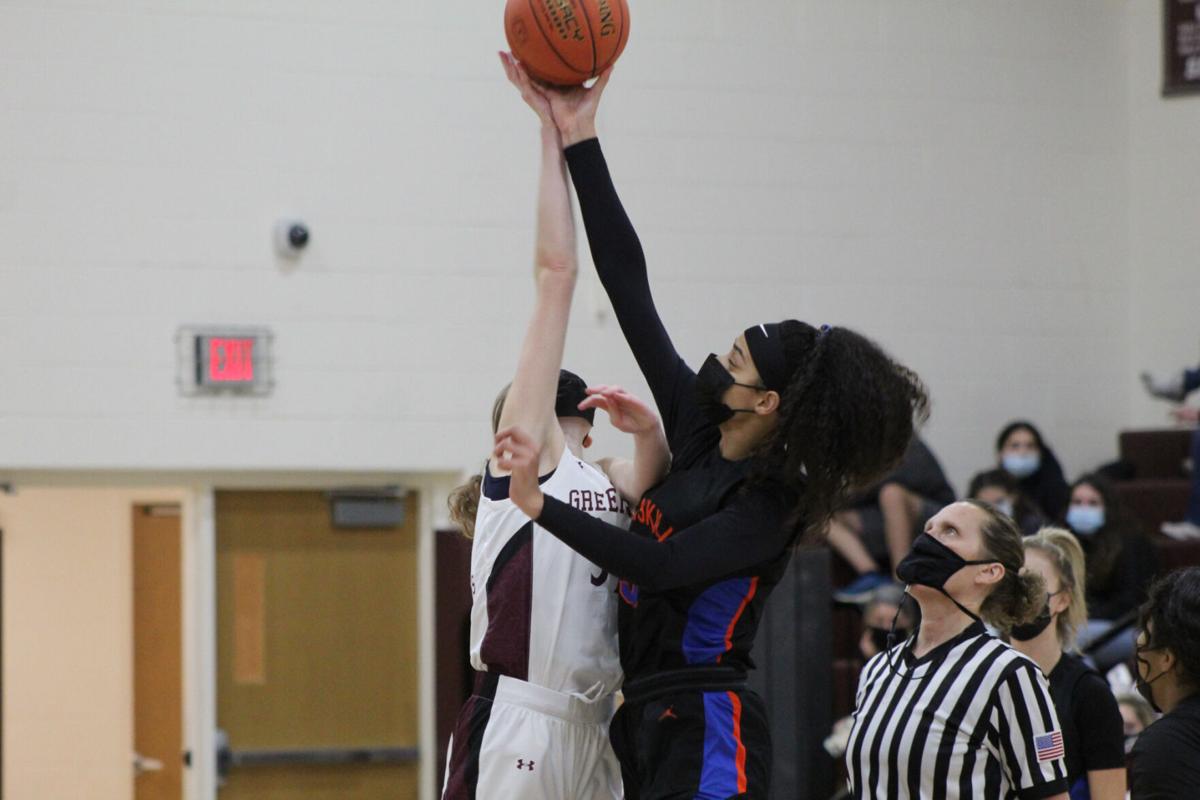 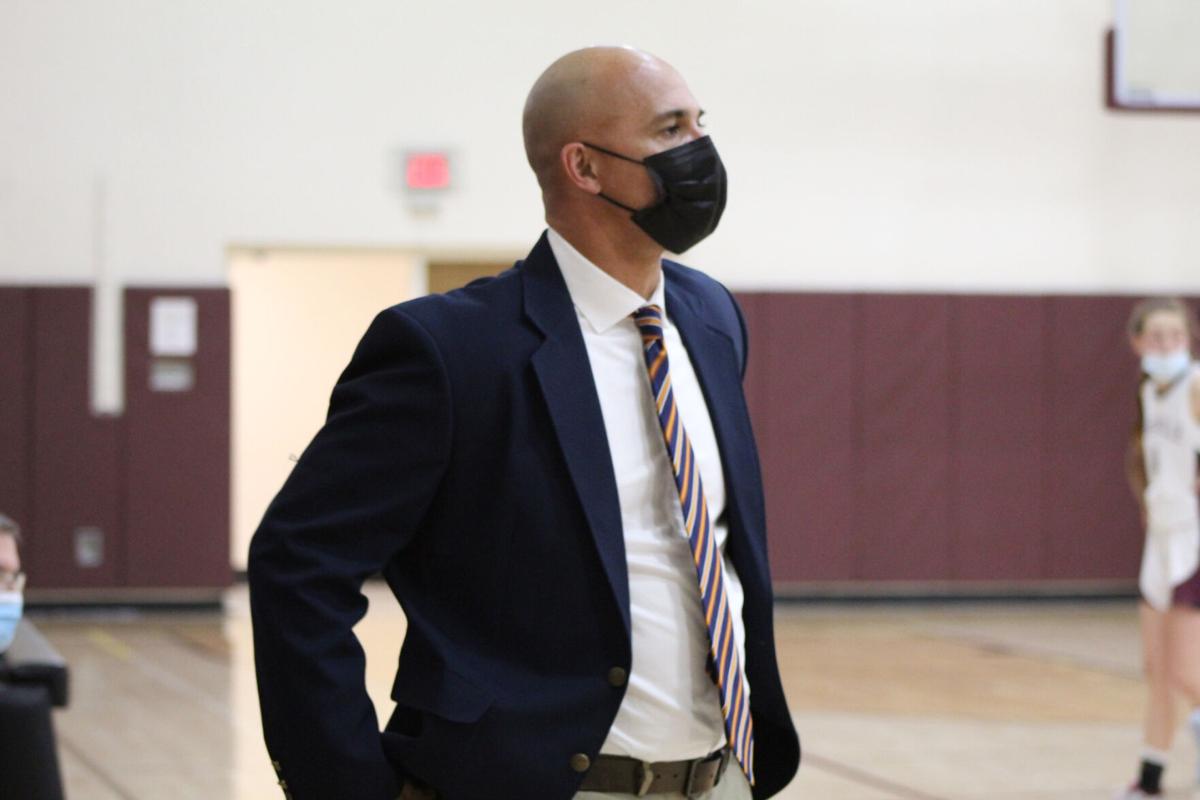 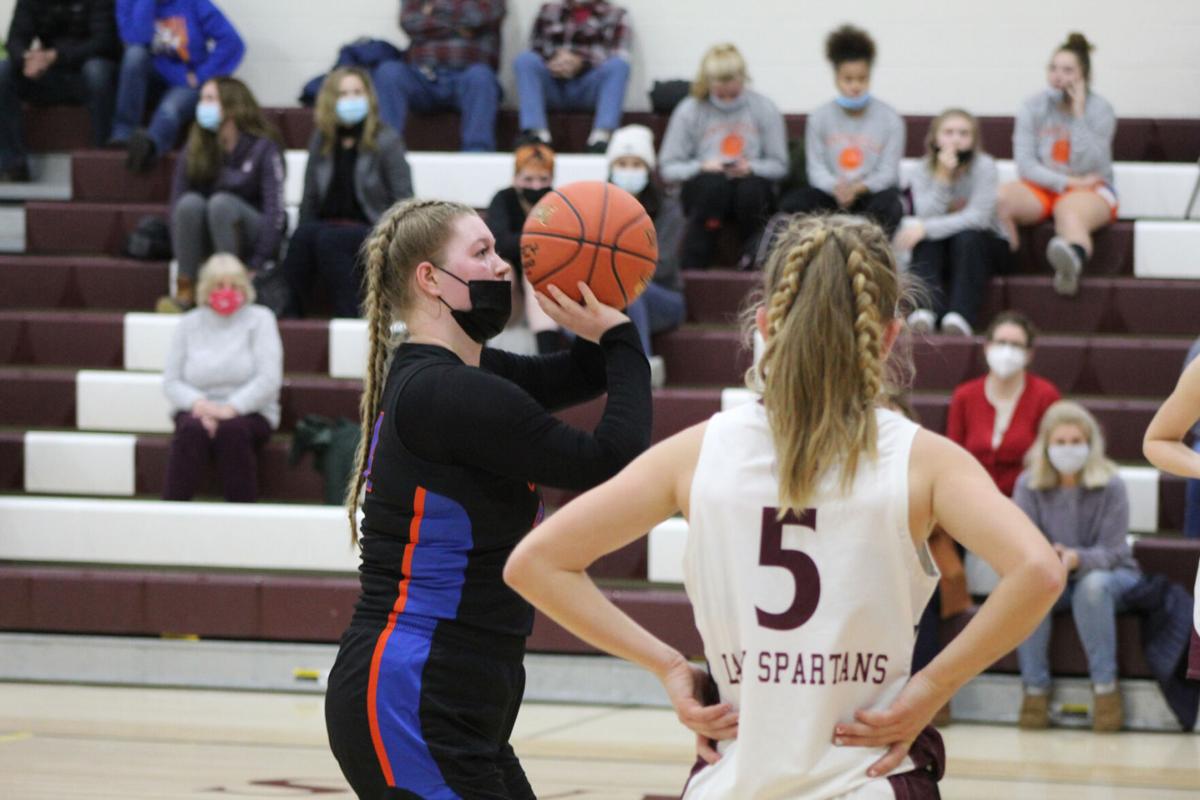 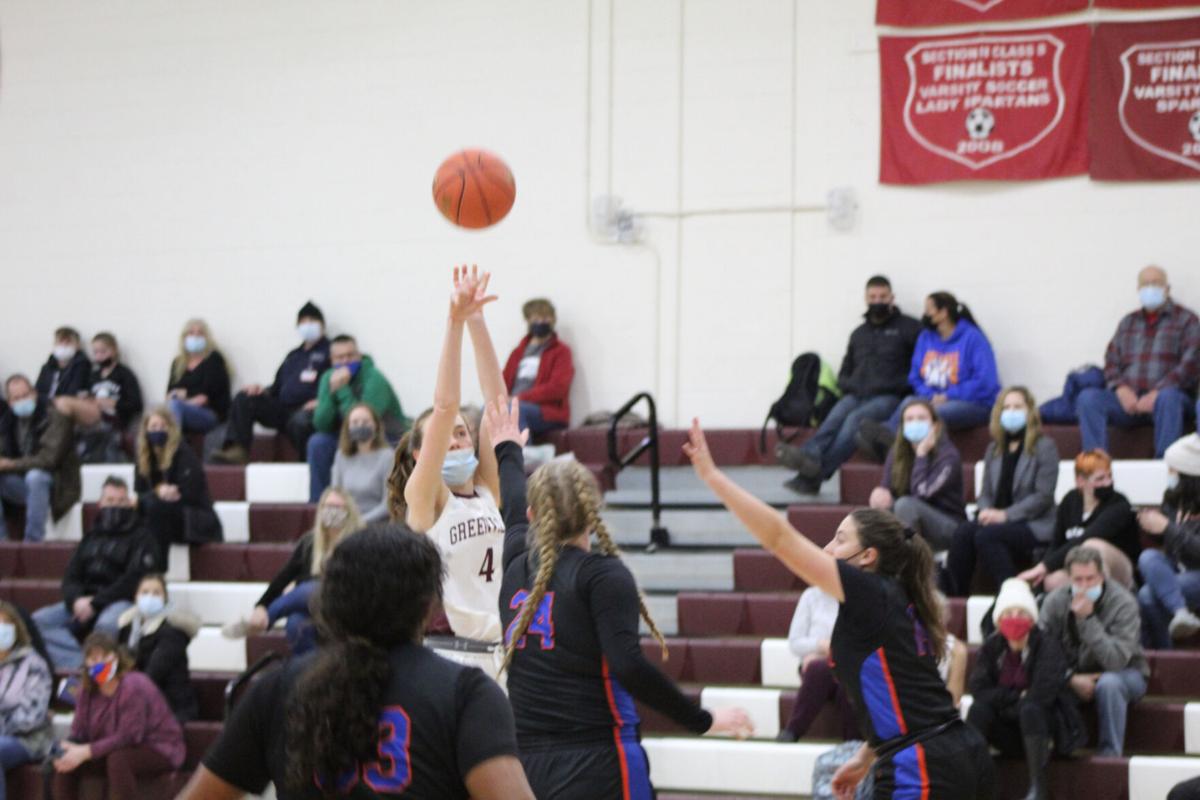 Janay Brantley led the box score with 33 points as the Cats’ defense locked down the Spartans in the second half. Bryn Fitzmaurice and Aislinn O’Hare had ten points each for Greenville as the Spartans dropped their first game of the season.

Brantley got off to a quick start for Catskill, knocking down a three pointer to open the game. Both teams crowded their opponents on defense though, and the score was 5-5 midway through the first quarter.

Hannah Konsul grabbed an offensive rebound for the Cats and laid it in to take the lead 7-5. The Spartans did not back down however, and held Catskill there at seven points for the quarter. Mikaela Crawley hit a three and a long two to put the Spartans up 10-7 as the first period ended.

Brantley had another nice shot to open the quarter again, this time down the lane and off the glass to cut the lead to 10-9. Fitzmaurice made a three-point shot for Greenville and after another layup, the Spartans called a timeout to take control of the clock with a 17-12 lead.

Brantley hit two free throws but turned it over on the next possession after Ava Edmond couldn’t handle the pass. The Cats made a few key stops to stay close, but their offense hit a cold streak as halftime neared. Both teams got a basket at the end of the period and Greenville was up 23-18 at the break.

The Cats came out in the third quarter wielding their patented aggressive defense and afforded Brantley a quick six points within the first minute. With the game 25-25, Catskill’s Kiana Salierno showed off her hustle and chased down a driving Aislinn O’Hare the length of the court to thwart the attempted layup.

The Cats took a timeout with 3:56 on the clock in the third and down 29-25 to regroup and take a brief rest. Catskill’s Jayden Lewis tied the game on a short range jumper and then gave them the lead 31-29 on a fastbreak layup. Brantley missed a three pointer at the horn to end the third period, but the Cats took a 35-31 lead into the fourth.

Catskill only dialed up their intensity further in the fourth quarter on both sides of the ball. Brantley drained a few buckets rather quickly and suddenly the Cats led 46-33, forcing the Spartans to use a timeout with 5:36 left in regulation.

Konsul made a great move in the paint to finesse a shot around the Greenville defender and the Catskill lead soon swelled to 50-34.

With under a minute left the Cats called a final timeout to hydrate and admire the work they did to pull ahead in a tough road game, after a slow first half. The Catskill Cats won the game 54-34 over the Greenville Spartans and remain unbeaten in 2021.

“Both teams played extremely hard showing grit and determination not to back down at the beginning of the game,” Greenville coach Steve Gipprich said. “We had a number of solid chances that kept us in the game in the first half that we capitalized on. I am extremely proud of our girls’ defense and poise while playing against a talented team such as Catskill.

“Chris (Quinn) and Ian (Quinn) have those girls dialed into how they want to play and adjust very well. We have seen Janey for the past few years now and she has only improved her game greatly since the beginning. She is a very talented ball player. Looking forward to the next time we see them.”