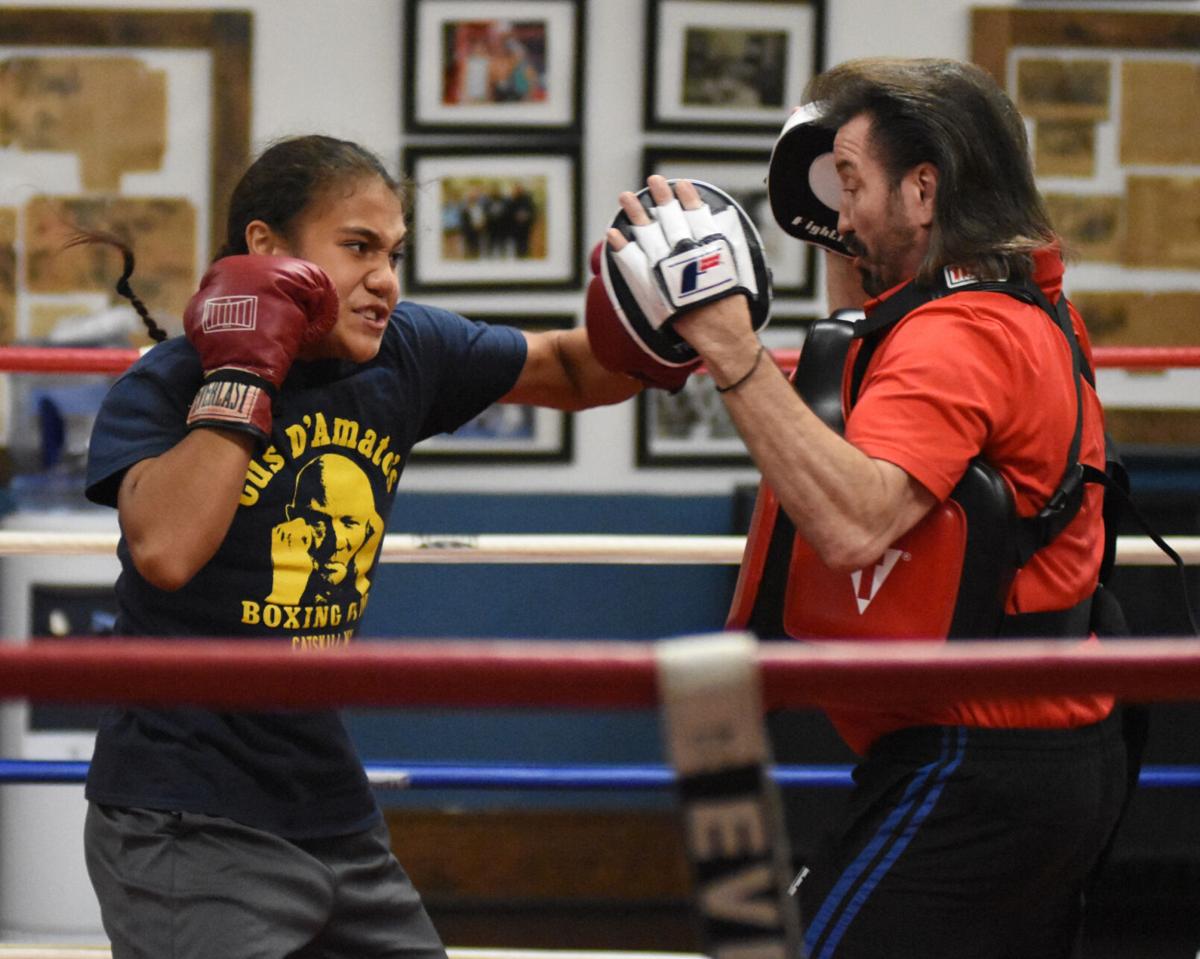 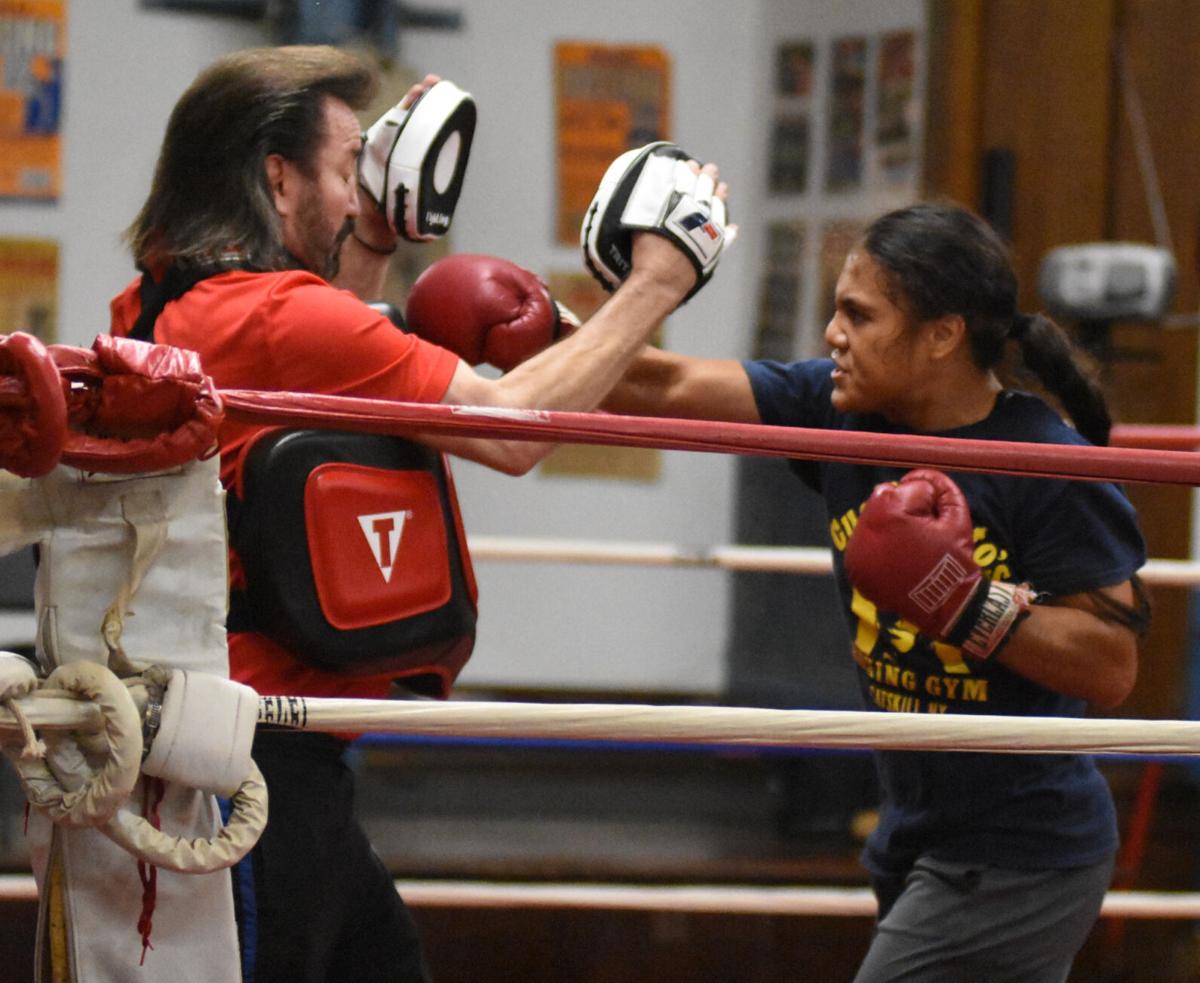 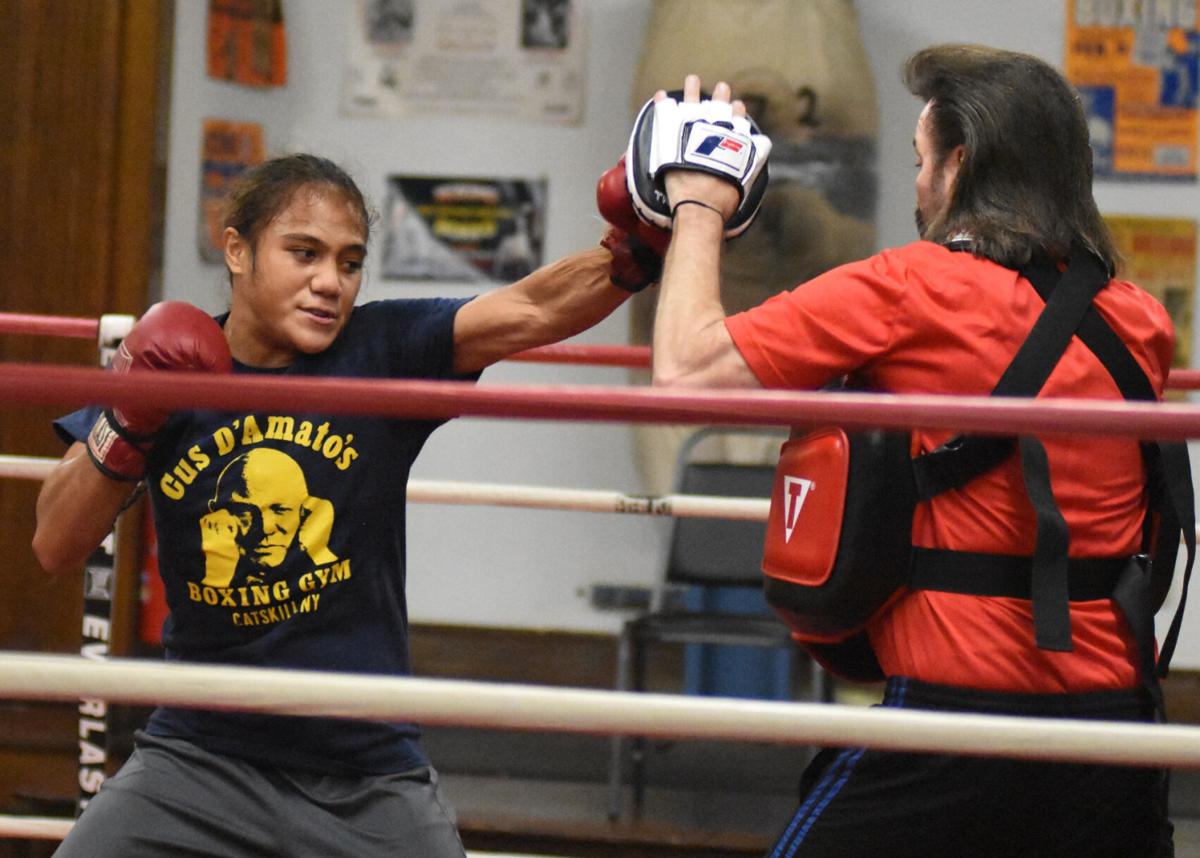 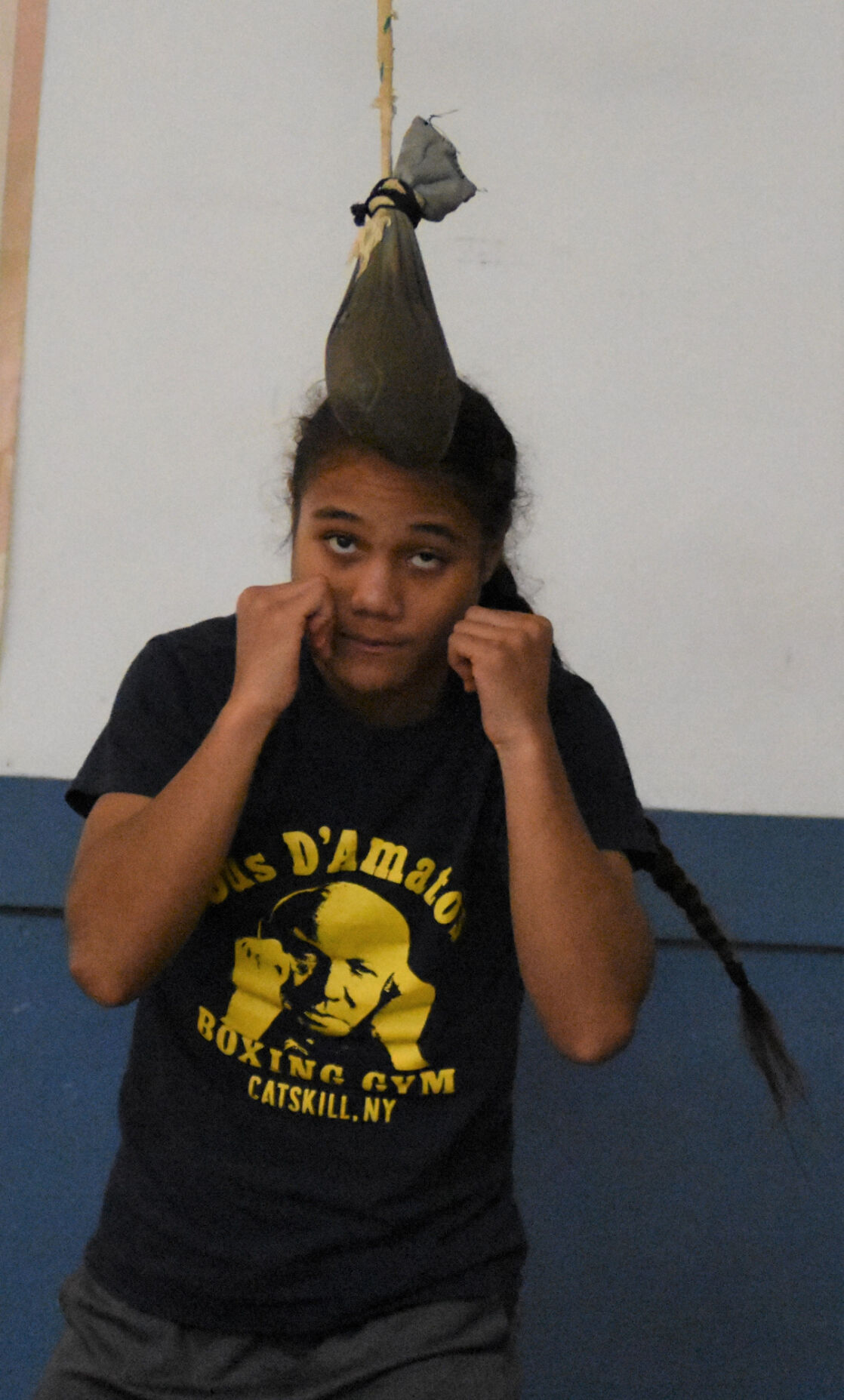 Tim Martin/Columbia-Greene Media Catskill boxer Fei Faiva works on her timing at the Cus D’Amato Gym in Catskill. 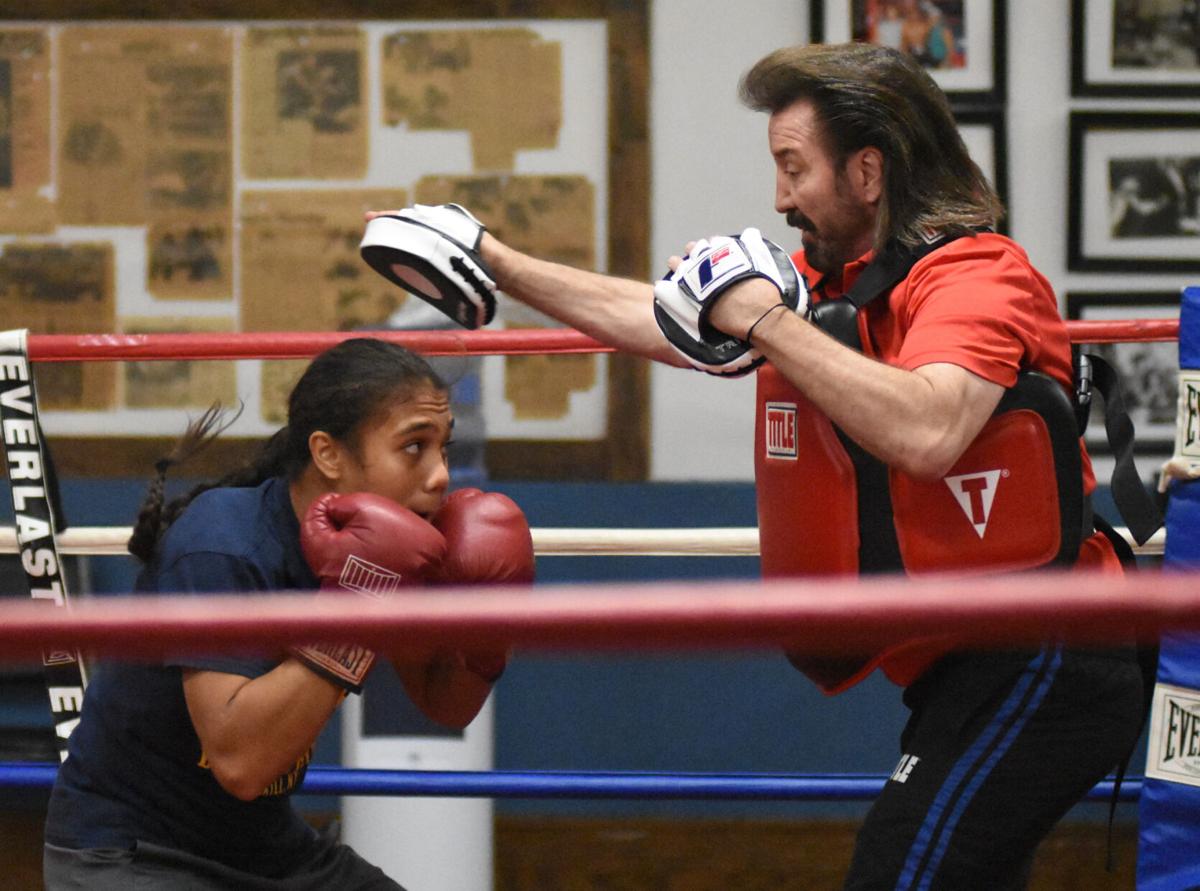 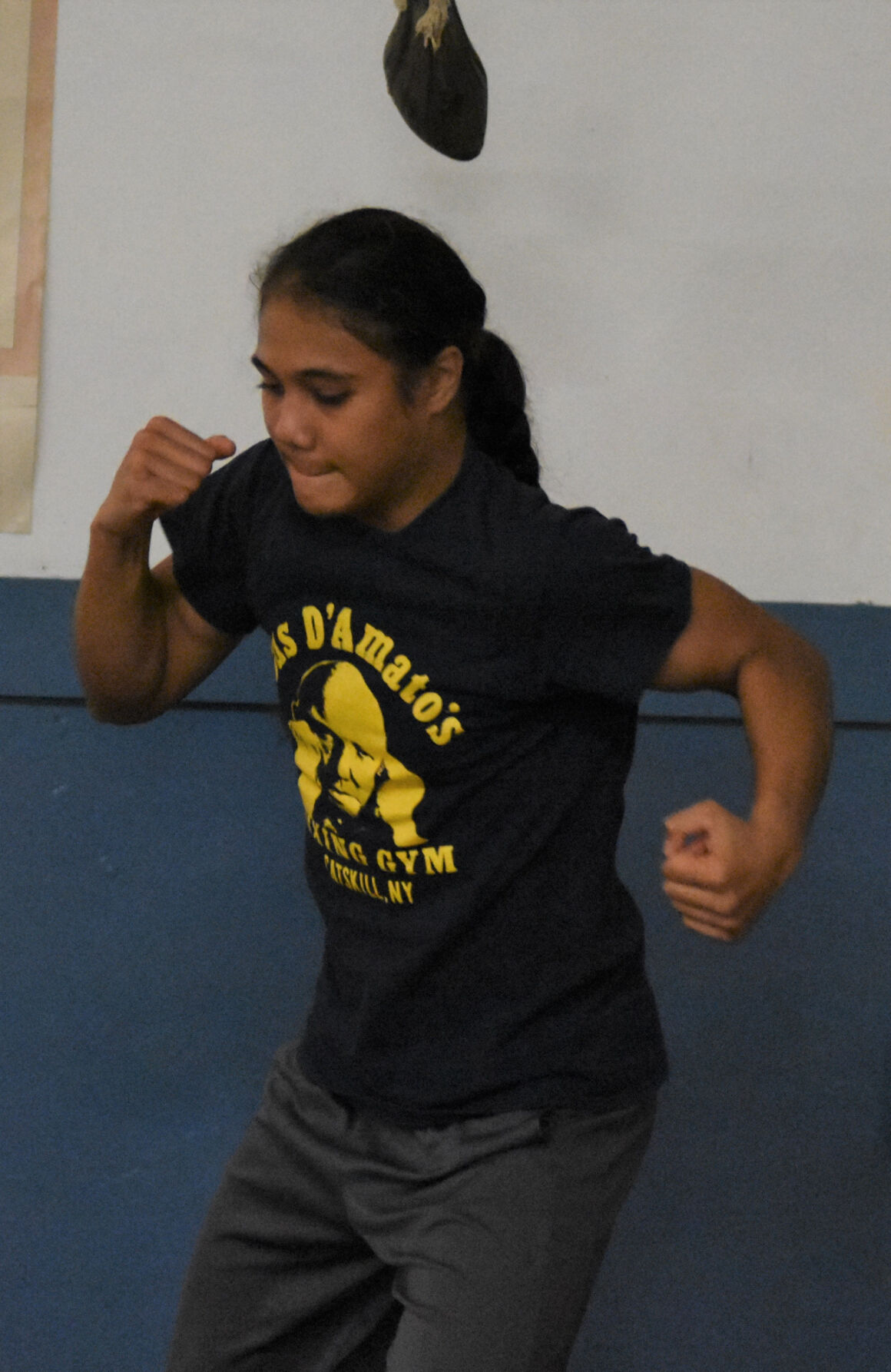 Tim Martin/Columbia-Greene Media Catskill boxer Fei Faiva training for her next fight, which is slated for Oct. 24 in South Carolina.

Tim Martin/Columbia-Greene Media Catskill boxer Fei Faiva works on her timing at the Cus D’Amato Gym in Catskill.

Tim Martin/Columbia-Greene Media Catskill boxer Fei Faiva training for her next fight, which is slated for Oct. 24 in South Carolina.

CATSKILL — Catskill’s Fei Faiva is as respectful and soft-spoken as any 18 year-old you could ever meet. Get her inside the boxing ring and it’s a different story.

Faiva, the latest prodigy from the Cus D’Amato Gym in Catskill, recently won her professional debut, pounding out a unanimous four-round decision over Jaica Pavilus in the super featherweight division at the Miami-Dade County Fair & Expo in Miami, Florida.

Originally from Samoa, Faiva moved to Tennessee when she was eight and came to Catskill five years ago. She first started boxing when her sister introduced her to the sport 10 years ago. Since then, she’s been on the fast track to success.

“Fei is a pleasure to work with because as a team she makes all of our jobs easier,” Faiva’s manager/advisor Kyle Lyles said. “She’s starting to grow and mature. In her maturing, shes showing independence, which is a good thing. I’ve been around a lot of boxers and she’s focused on being a champion, and her work ethic is through the roof.

“You don’t have to tell her to get up and go to work. We have to slow her down. If we allowed her to workout three or four times a day, she would. Right not that’s not necessary. She’s so young and has a long way to go, so we have to make sure we do it the right way and take our time. But if the opportunities come and she’s ready, we’re going to take advantage of them, no question. We’re not going to slow her down to the point where we pass up and opportunity because we have this mentality of slowing her down. But we’re not going to rush her either.”

George Young, who co-trains Faiva along with Darren Ruff, saw the potential in his young phenom right away.

“When she first came here she had that determination to workout,” Young said. “She used to do the insanity program and then come in here to work out. That’s when I could see she was going to be special. I told her if she continues to work and stay here and learn Cus’ style. But I want her to be her own fighter and make her own name with this style and she’s going to make it even better. Everybody that’s seen her says she’s special.”

Faiva understands it will take some time to get where she ultimately wants to be, but has a definite timetable in mind.

“I’d definitely want to be a world champion before my two-year mark of being a pro,” she said. “But that’s as far as I’m seeing right now.”

Faiva benefits from having a solid support group helping her along.

“We’re evolving as far as communication,” Lyles said. “George and Darren in the ring, myself, her sister, we all pay close attention to her. If we something she’s doing we’ll tell her about it and sometimes just telling someone about something, they don’t see it so they really don’t understand it.

“She’s probably heard us say things 1,000 times over, plus she has a boxing IQ and now when she starts watching the videos she starts to see things right away without us even telling her. That’s everyone evolving, especially her. As she’s maturing as a young lady, you can see her IQ is maturing as well, and that’s what’s going to make her even better. If she’s willing to listen to her trainers and watch film and continues to work hard, she has nowhere else to go but up.”

Faiva is learning the peekaboo style taught by D’Amato and perfected by Mike Tyson during his heavyweight championship reign. Of her many skills, she says two things stand out.

“To be honest I feel like my head movement is something that really helps me apply pressure and be aggressive effectively,” Faiva said. “My head movement and I hit hard. Those are the two things that I know on a rainy day I have.”

Having just 16 amateur fights and one professional bout under her belt, Faiva has already caught the attention of many in the boxing world, but she insists success and all that goes with it will not get to her head.

“As many compliments and praise as I get from people, that’s just extra,” she said. “I really don’t need it because I have something that’s driving me forward anyway, that’s keeping me on track to make the right decisions and work extremely hard.”

Lyles feels Faiva will have no problem in handling the limelight.

“It’s easy to get caught up in knowing and thinking your good and slow down your whole progression by not working as hard, but that’s not the case here,” Lyles said. “She knows she’s good, she hears it a lot, but we remind to stay humble and keep working as hard as she is now and everything is going to come into place. It’s all up to her to continue working hard in her journey.”

Faiva fought at 130 pounds in her debut, but Lyles expects she’ll settle into the 126-pound weight class for the early part of her career.

“Our goal is probably for her to win her first title at 126,” Lyles said. “At this point, the weight classes don’t matter. She doesn’t have to kill herself to get to 126. Her fighting between 126 and 130 we’re very comfortable with because of her skill and her power.

“As she starts to win and starts to get ranked by the WBA or WBC, then she has to hone in what division she’s going to fight in and we believe 126 would probably be best because she’s young. As she gets older and her body develops more and starts to gain weight, she can then start to climb weight classes.”

Faiva had trouble finding opponents at the amateur level, which is why she decided to turn pro at 18. By all accounts, she passed her first test in the pro ranks with flying colors, but Faiva felt she could have done better.

“I was grateful for the win, but performance-wise I wasn’t happy with it,” she said. “I was disappointed in the outcome. I had expectations for myself.”

Faiva won all four rounds on all three of the judges scorecards, but she definitely sees room for improvement.

“Instead of following them around while still cutting off, I’m really going at their pace. So once they do land, I have to either beat them to the punch or I have to counter. Either one. You eliminate all of the games your opponent will try to play with you if you actually catch them while they’re moving. I’ve experienced it with sparring. Whenever I would press forward behind my jab as they were moving they would immediately cover up. So it’s like a trick in how I can catch my opponent faster and also stop them moving any farther away from me.”

Young felt it was a great learning experience for Faiva.

“She (Pavilus) was tough, but Fei now sees what she has to do more of,” Young said. “With more combinations it might have been a different story, that’s why she needs to put punches together instead of relying on just one punch. She puts her punches together she’s going to start knocking people out or getting eight counts. Once she puts combinations together it’s going to be a different story.”

Faiva didn’t have much to time to savor the victory as she’s already training for her next fight, which is lined up for Oct. 24 in Greenville, South Carolina against Camille Casson. “As of right now, I already have fights lined up for this year and feel I’m starting off pretty busy, which is good,” Faiva said. “I like how my fighting career is being managed, so I’m letting my manager take care of that. He’s doing his part while I’m doing mine.”

Lyles plans to keep Faiva busy through the rest of the year and into 2021 with a goal of her fighting locally next summer.

“Covid slowed things down, but now that things are opening back up we want to aggressively get her as many fights as we can. Right now we have a fight schedule for Oct. 24, followed by Nov. 7, followed by Nov. 21 and coming back Dec. 12. These are all four-rounders. My ultimate goal is to fight her for four rounds her first 10 fights, but I want those 10 fights to be done with by the spring of next year. then we’ll move to six round fights and then reassess.

With one pro fight in the books and four more lined up over the next two months, Lyles couldn’t be happier with how Faiva’s career is starting out. He feels she’s headed to the top and will be a crowd pleaser that fight fans will flock to see.

“When Mike started out he changed boxing a little bit because everyone was wondering who’s this guy knocking everybody out? People want to see that in a combat sport and that’s what she’s going to deliver, and when fans around the world see that they’re going to say ‘who is that female fighter coming out of that gym? She’s just like Tyson.’ Now people are going to start talking and the buzz is going on and more people are going to want to see her.”