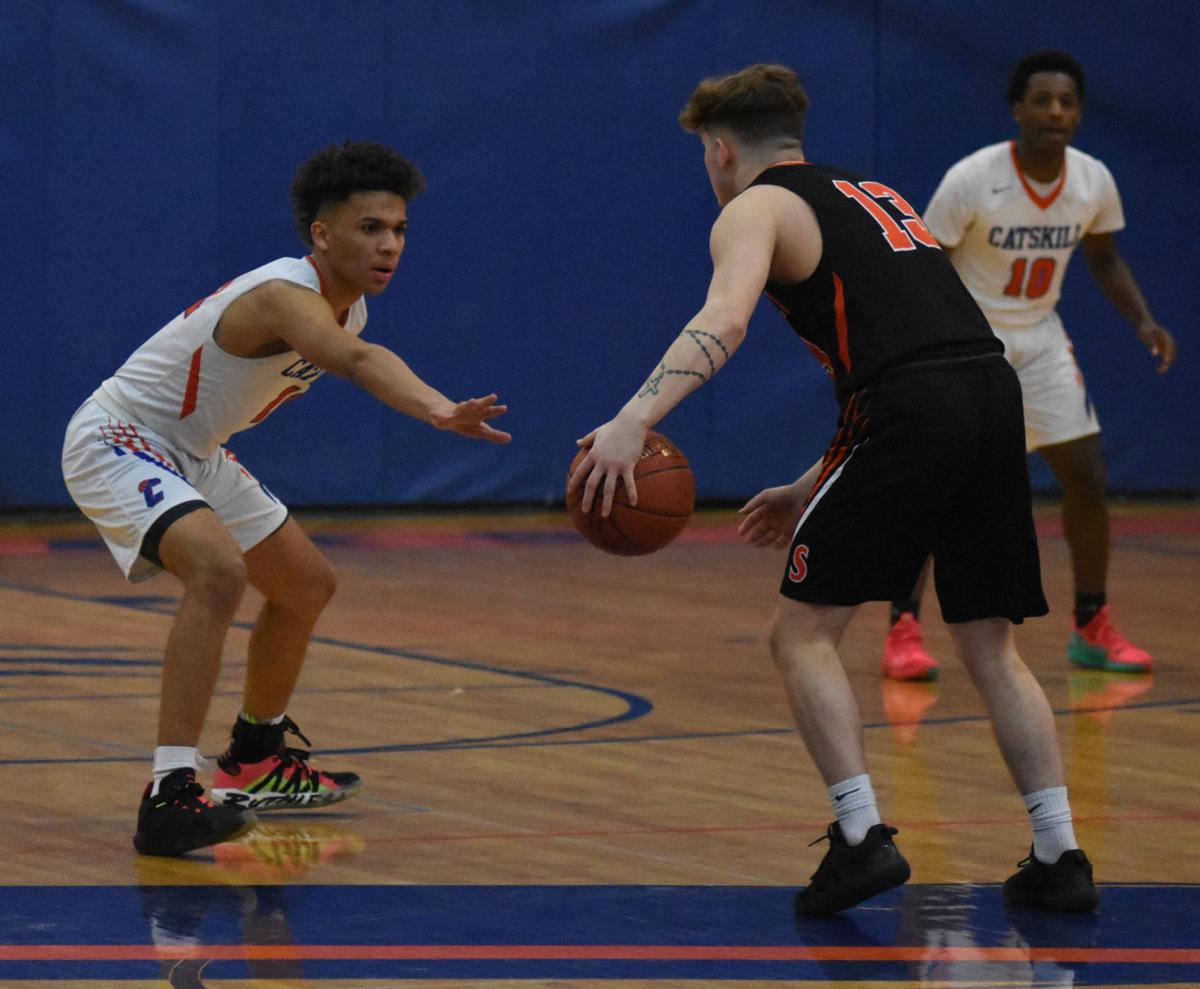 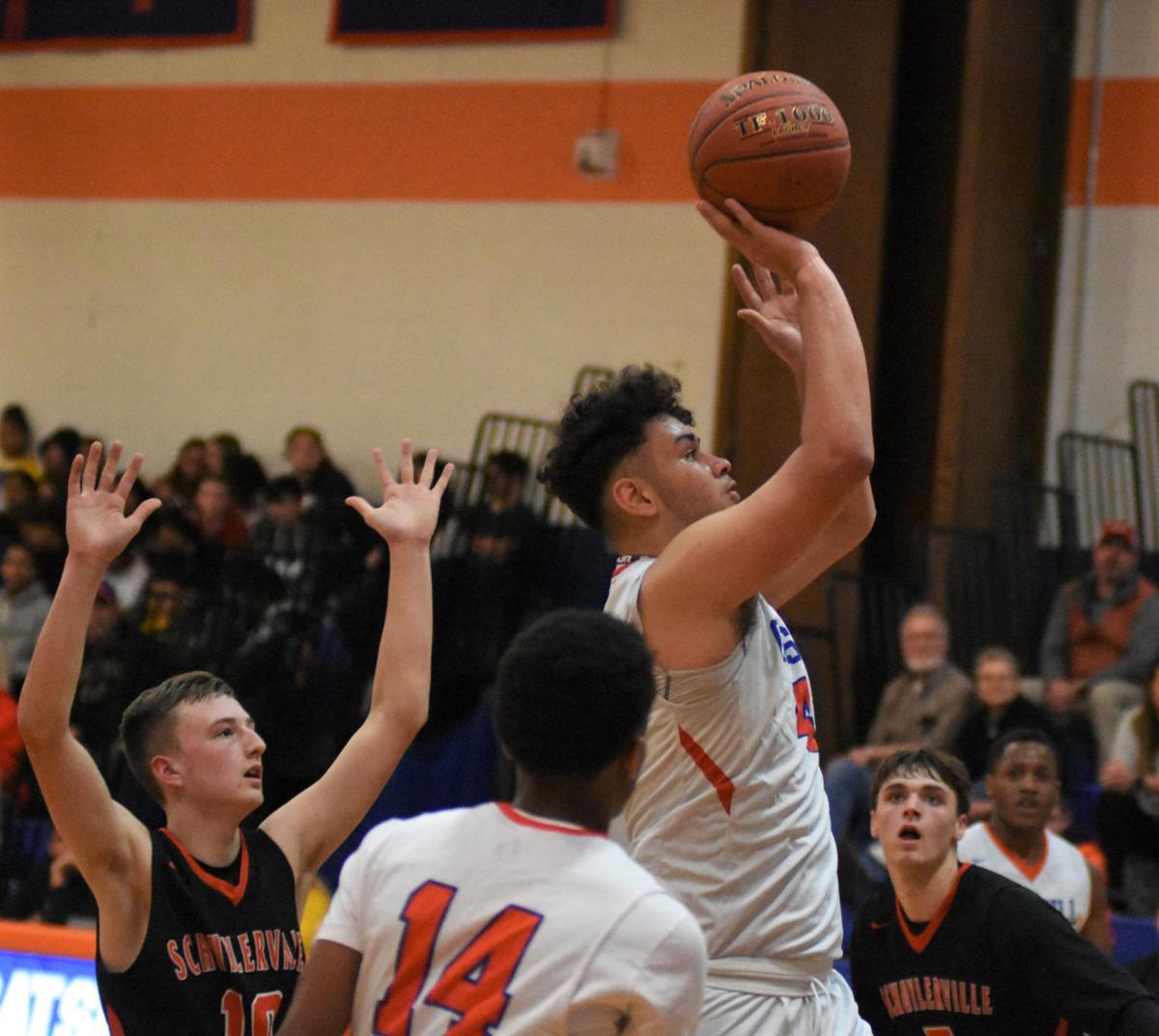 Tim Martin/Columbia-Greene Media Catskill's DeVon Haye takes a shot in the paint during Tuesday's Section II Class B opening round game against Schuylerville. 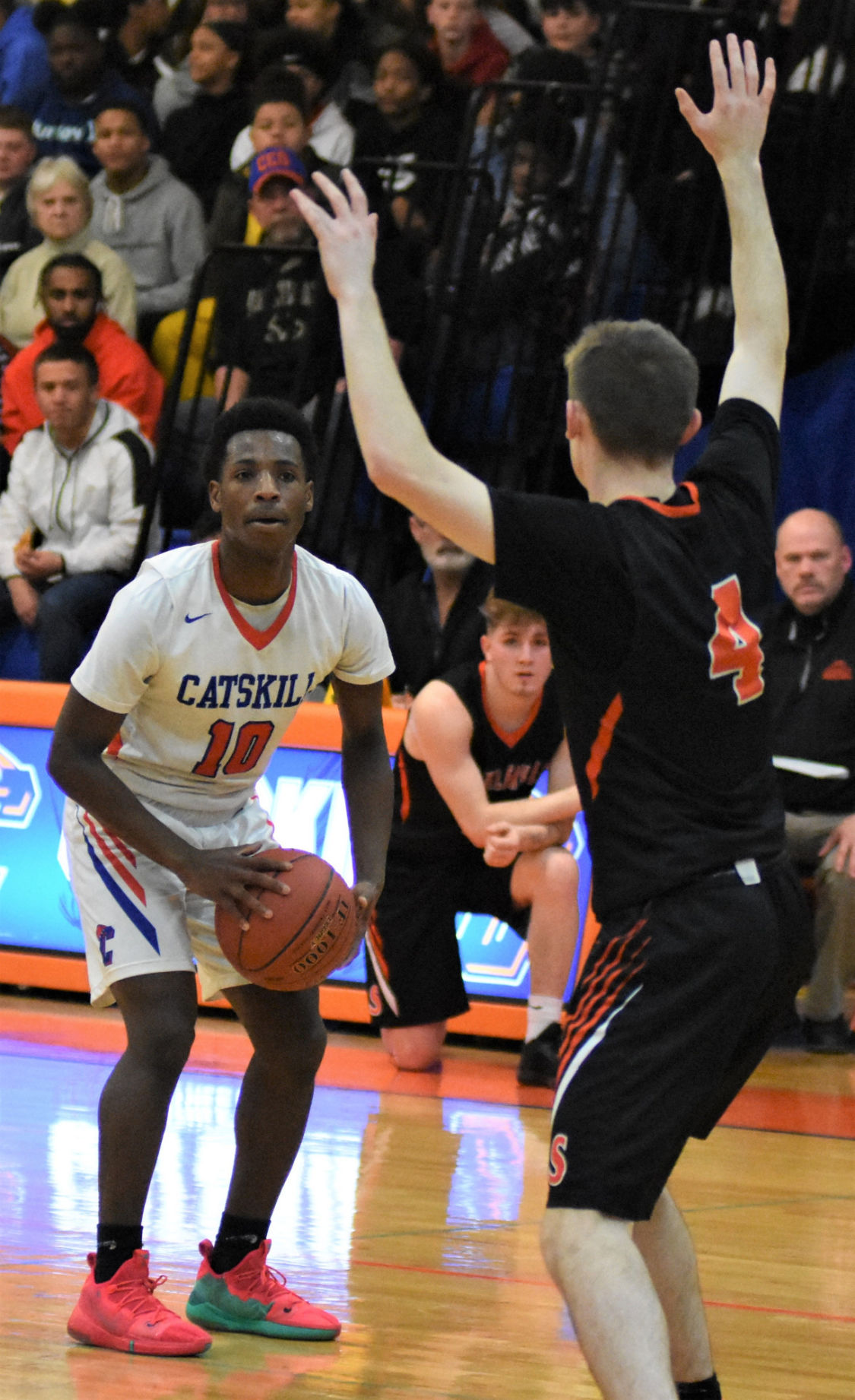 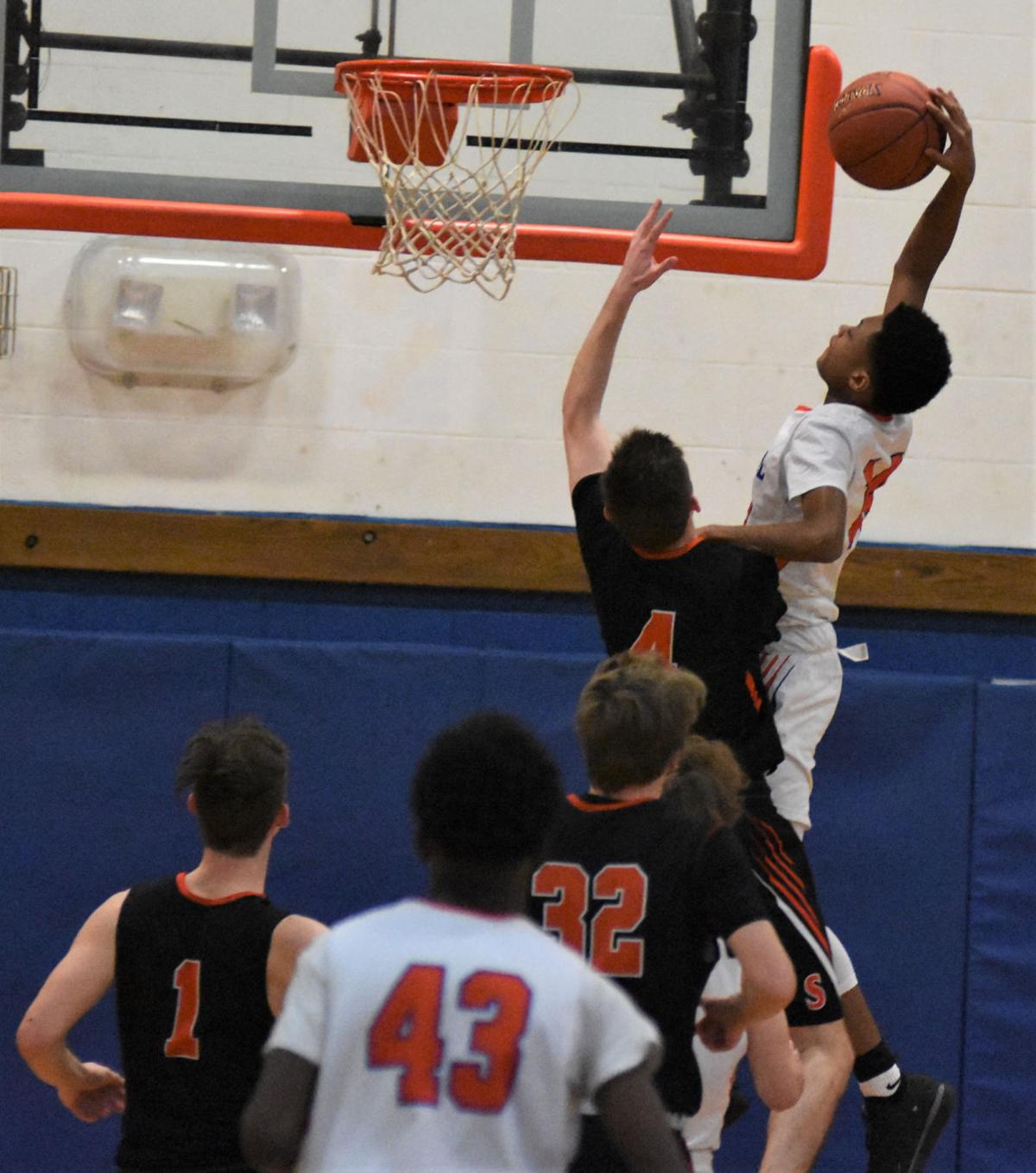 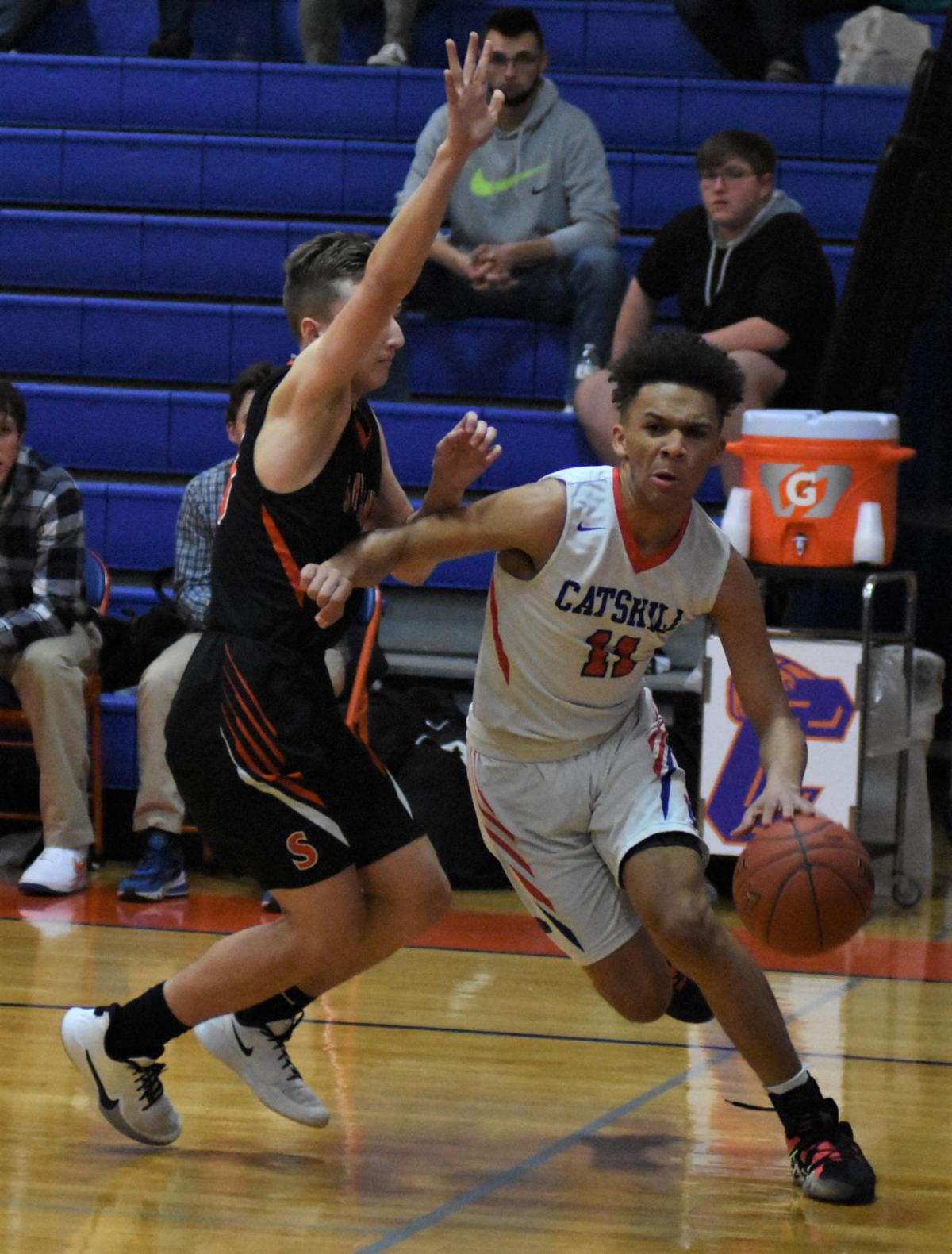 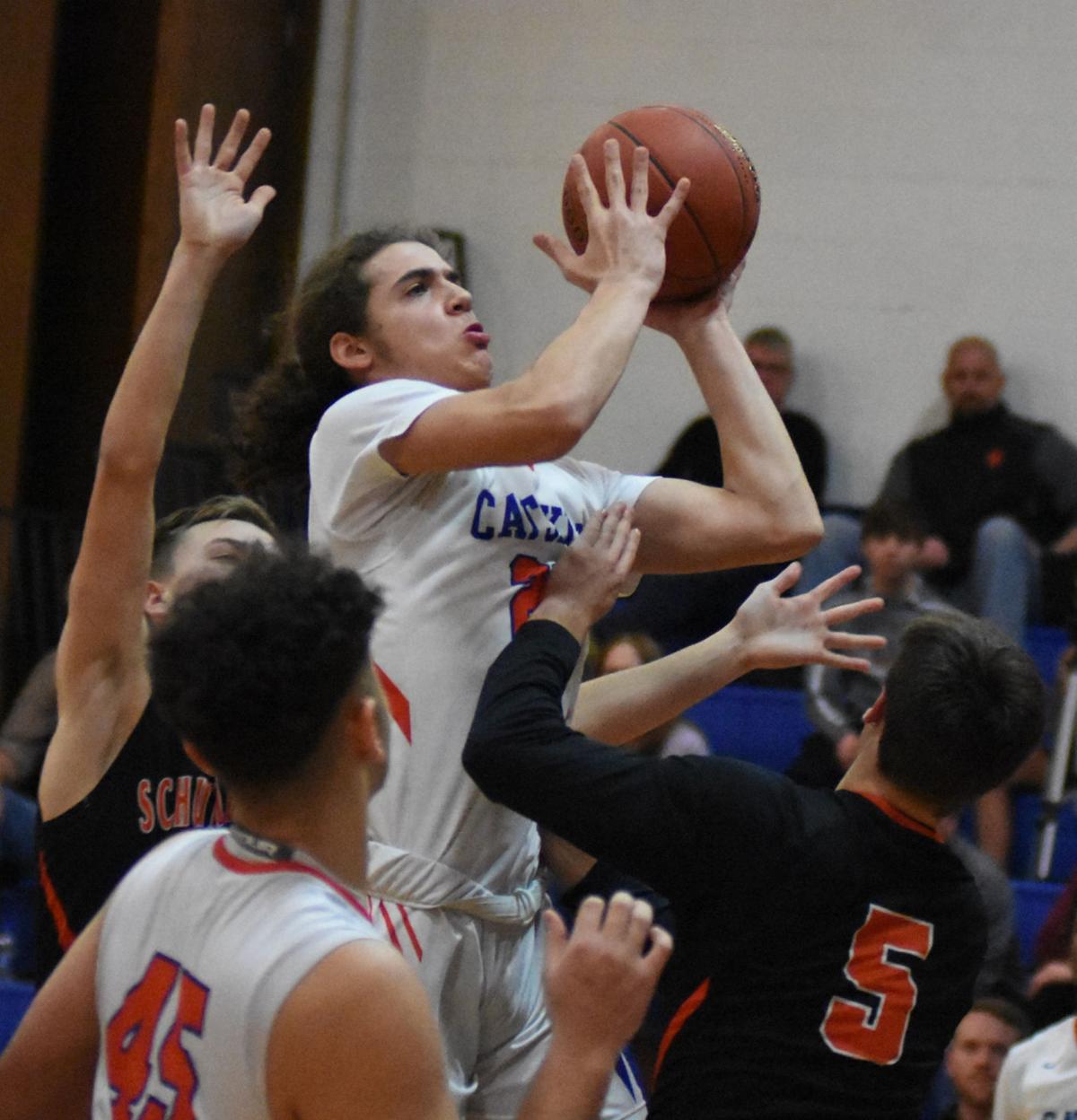 Tim Martin/Columbia-Greene Media Catskill's DeVon Haye takes a shot in the paint during Tuesday's Section II Class B opening round game against Schuylerville.

CATSKILL — The Catskill Cats won their opening round Section II Class B boys basketball playoff matchup on Tuesday night against the Schuylerville Horses, 77-50.

Lavon Fernandez and Devon Haye showcased their talents once again, combining for 51 points (Haye 28, Fernandez 23), fueling the Cats’ opening victory in the first round at home.

The Cats got off to a hot start with an 8-0 run to start the contest, putting pressure on the Horses early. Catskill maintained the eight-point lead down to the 3:30 mark in the first period, up 16-8.

Schuylerville began to mount some offense as the opening quarter dwindled, but the Cats were still dictating the pace. The Horses were down by 12 points going into the second, but were showing some signs of life.

In the second quarter, the Horses had plenty of chances for offensive rebounds and they were being plenty aggressive on their shot attempts, not forcing too many bad ones.

However, as soon as they took a shot, they would backpedal and head back to the other end for defense as the ball rimmed out. They looked scared to challenge Catskill in the paint for potential rebounds, and conceded almost every single opportunity.

Haye knocked down two free throws with 4:45 before halftime, to push the Cats’ lead to 30-15. On a few possessions before the break, the Horses mounted a sliver of offense, six more points, as the Cats scored 11 more themselves the rest of the quarter.

And though Catskill was up by 20 going into the locker room, they were slowing down and could have led by an even larger margin to that point.

The third period opened, and the Cats just looked ice-cold, scoring a mere five points in the first 3:00 of the frame.

Thanks to this lull in momentum, Schuylerville attempted to mount a comeback. Down by 16, the Horses hit three straight pointers on three consecutive possessions, and trailed 48-39, forcing Catskill to call a timeout with 2:50 on the clock in the third.

As the third ended with Schuylerville trailing, 52-41, there was a lot of game time left, and the Horses looked to carry the momentum-swing into the fourth.

Catskill spent the first few minutes of the final period trying to keep the lead over 10 points, and hold Schuylerville at an arm’s-length. The Horses managed to cut the lead again to 11 points, but sent the Cats to the free throw line.

Catskill’s Leviticus Johnson sunk both foul shots to extend the lead to 13, and dash the Horses’ hopes of a late rally. The dagger came less than a minute later, when Fernandez drove into the lane and pulled up with a floater over the defender’s hand and through the cylinder to put the cherry on top for Catskill.

The Cats toyed with Schuylerville in the final minutes, scoring when they felt like it, and the Horses not making enough shots to chip away at the lead anymore.

At the final horn, Catskill took the victory and will move on to the next round to play Hoosick Falls on Friday night at 8 at Hudson Valley Community College.