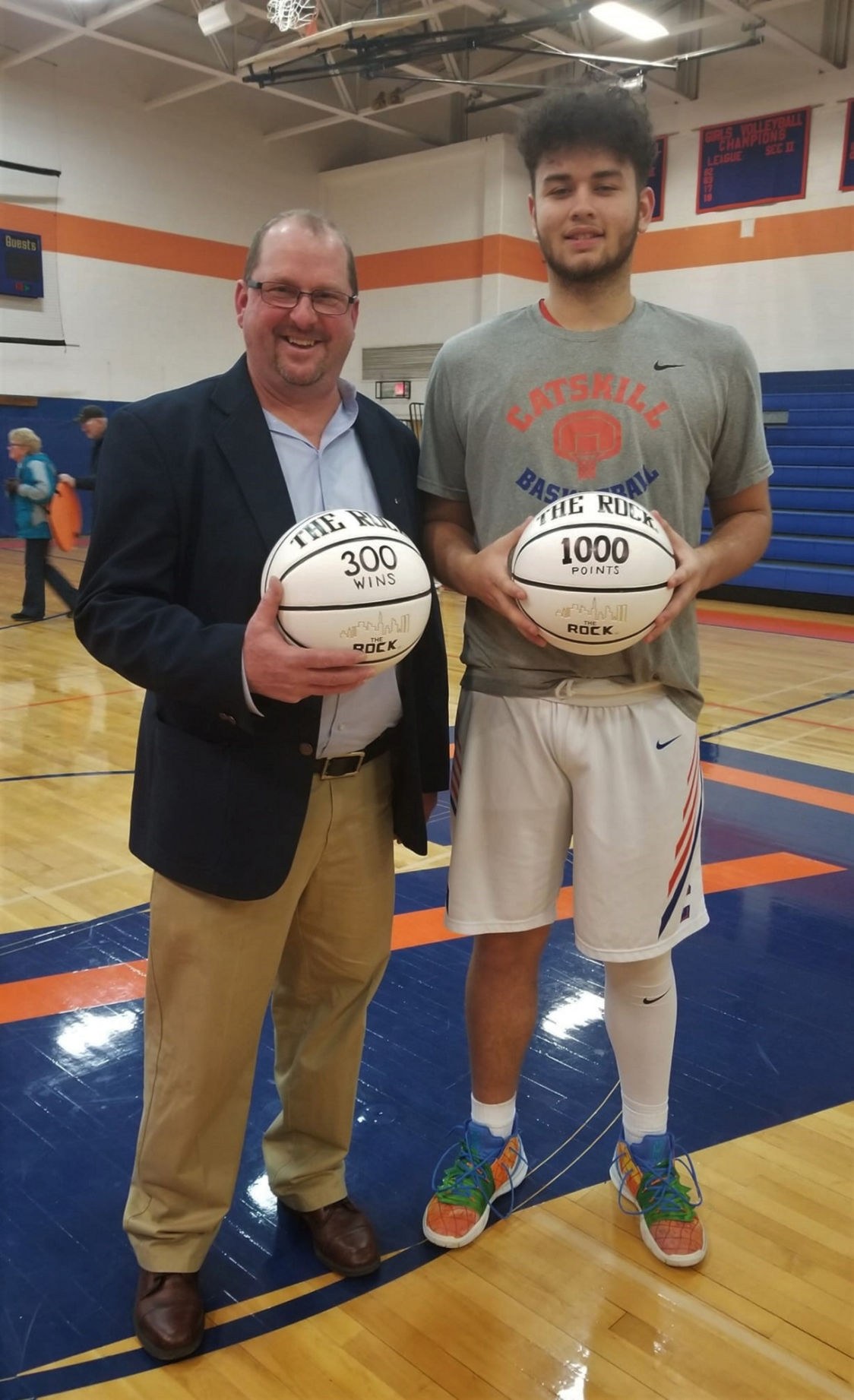 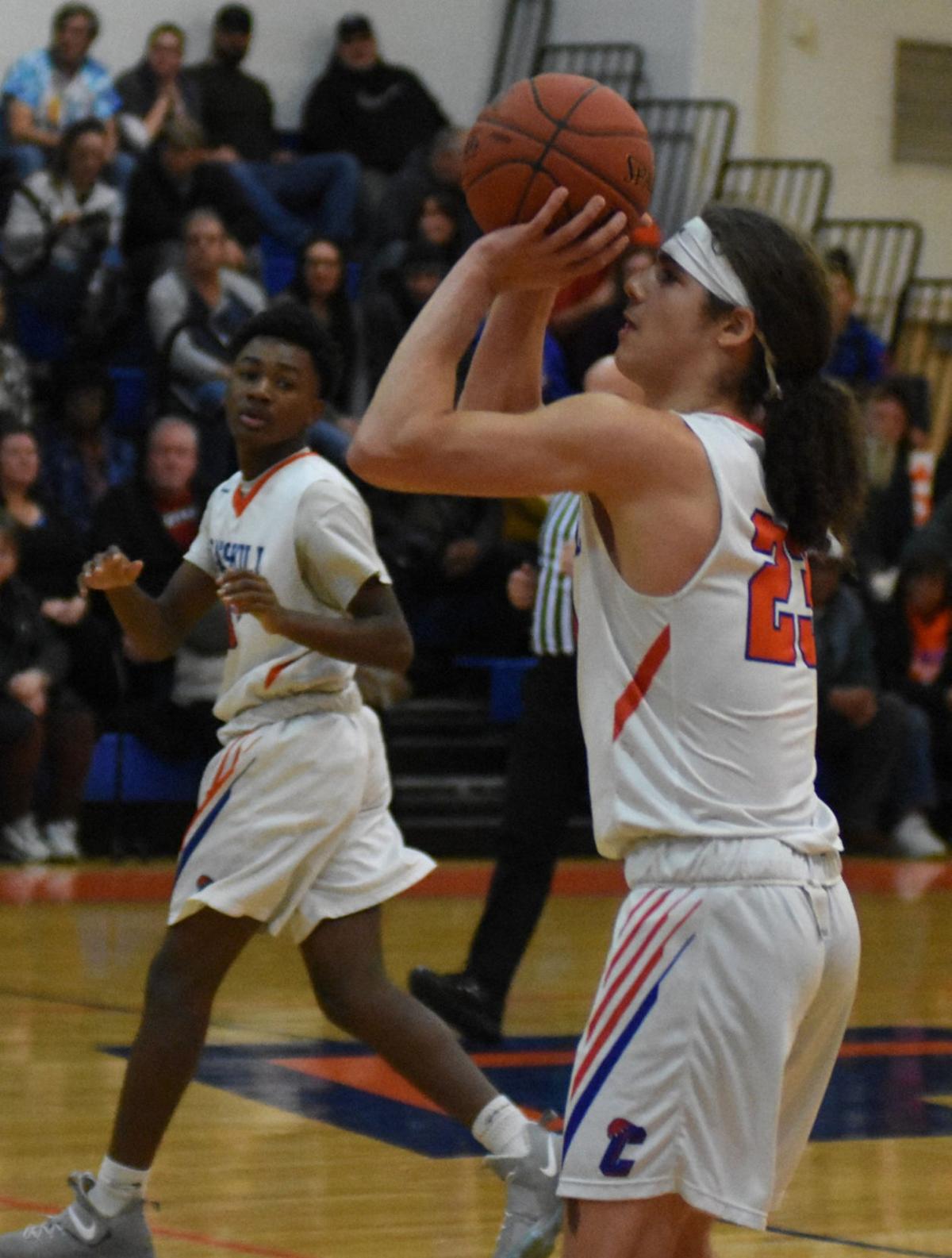 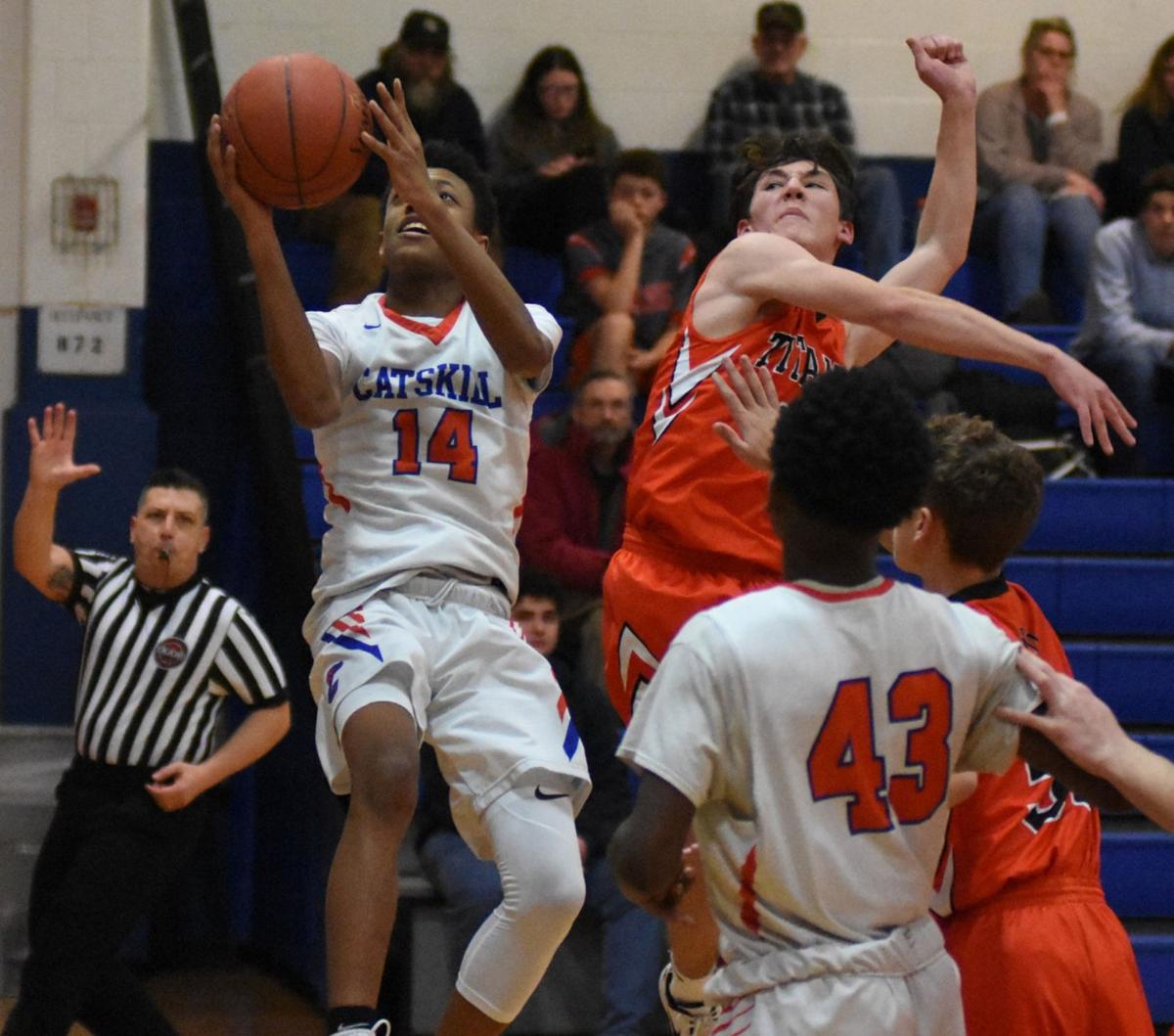 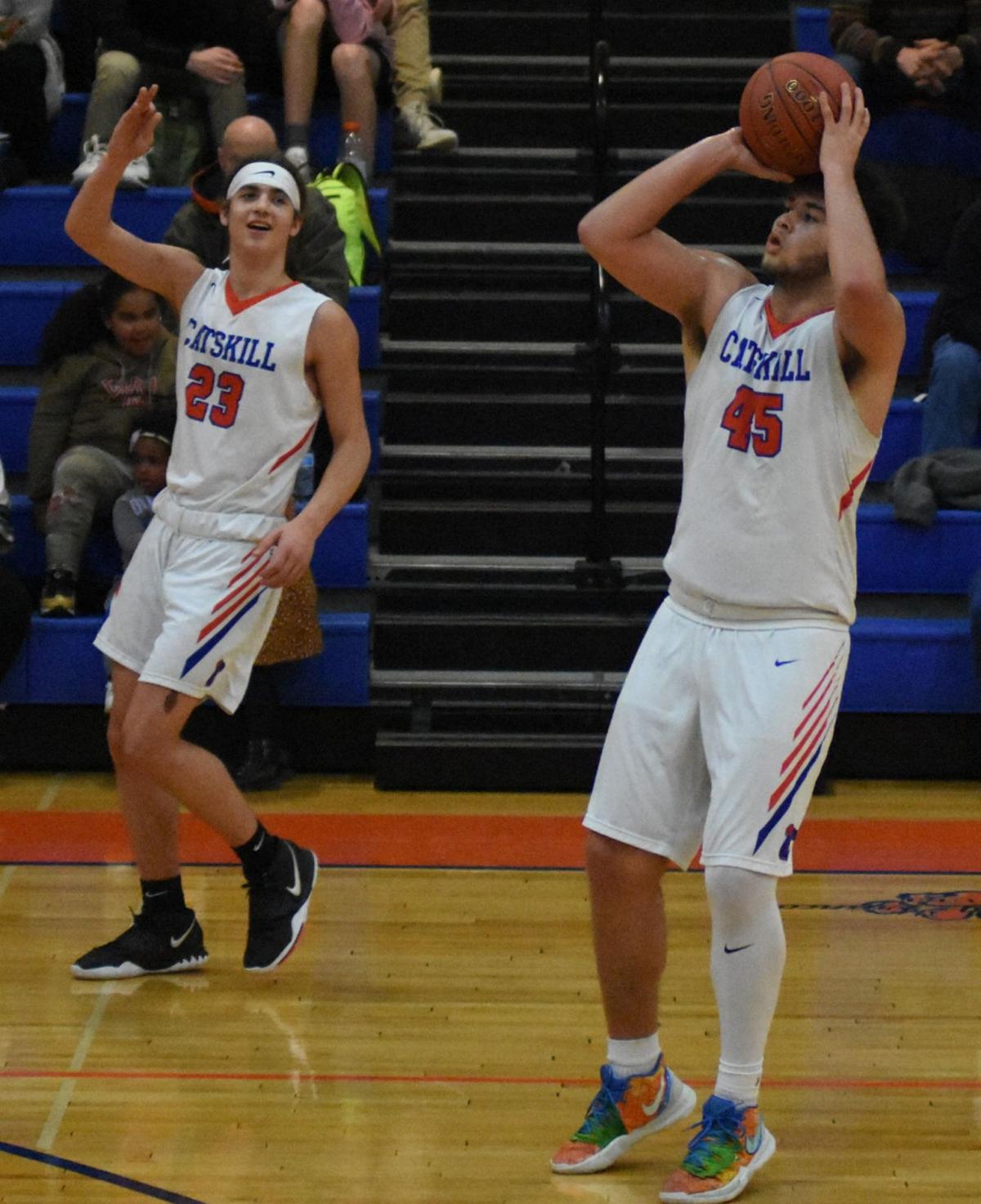 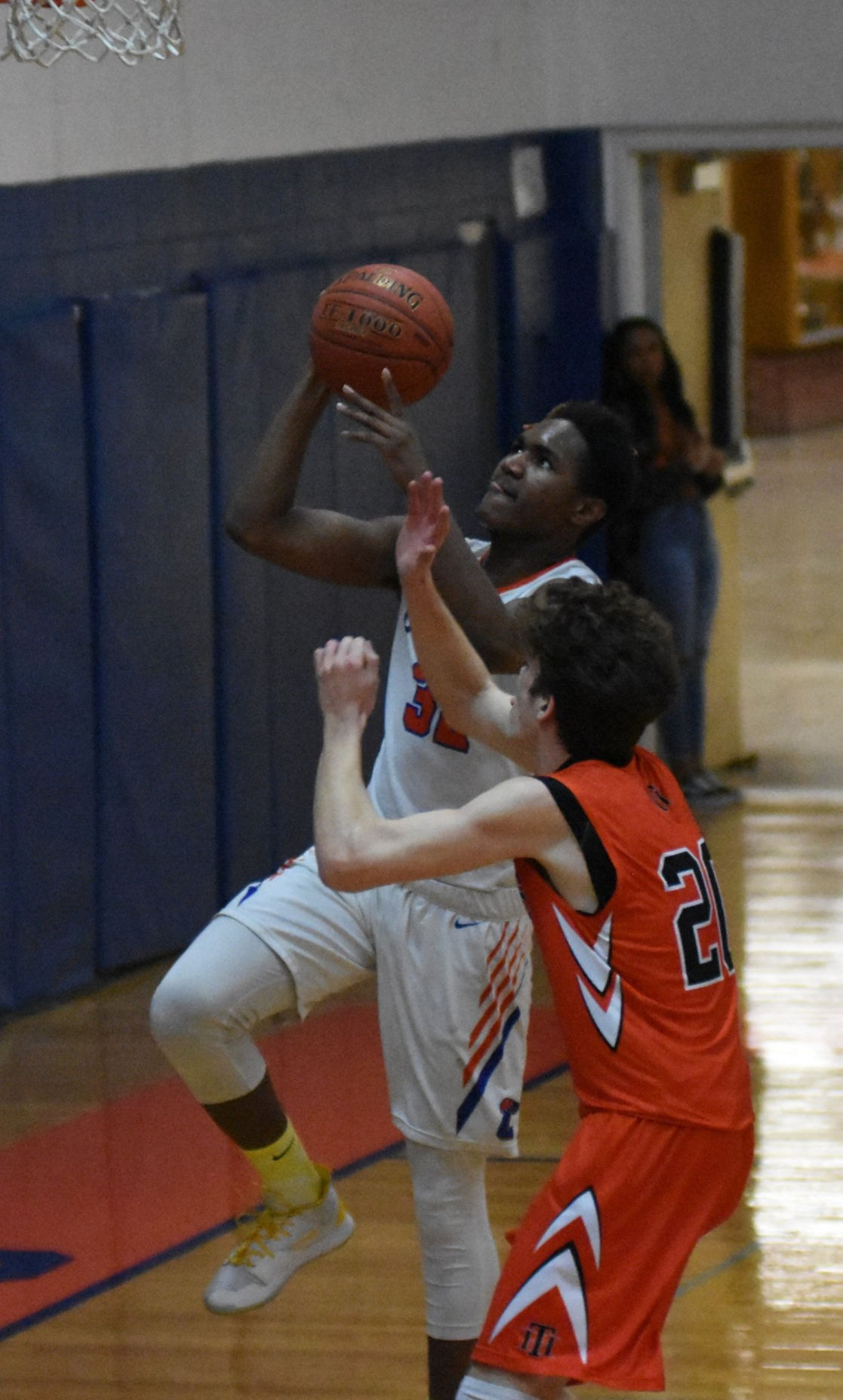 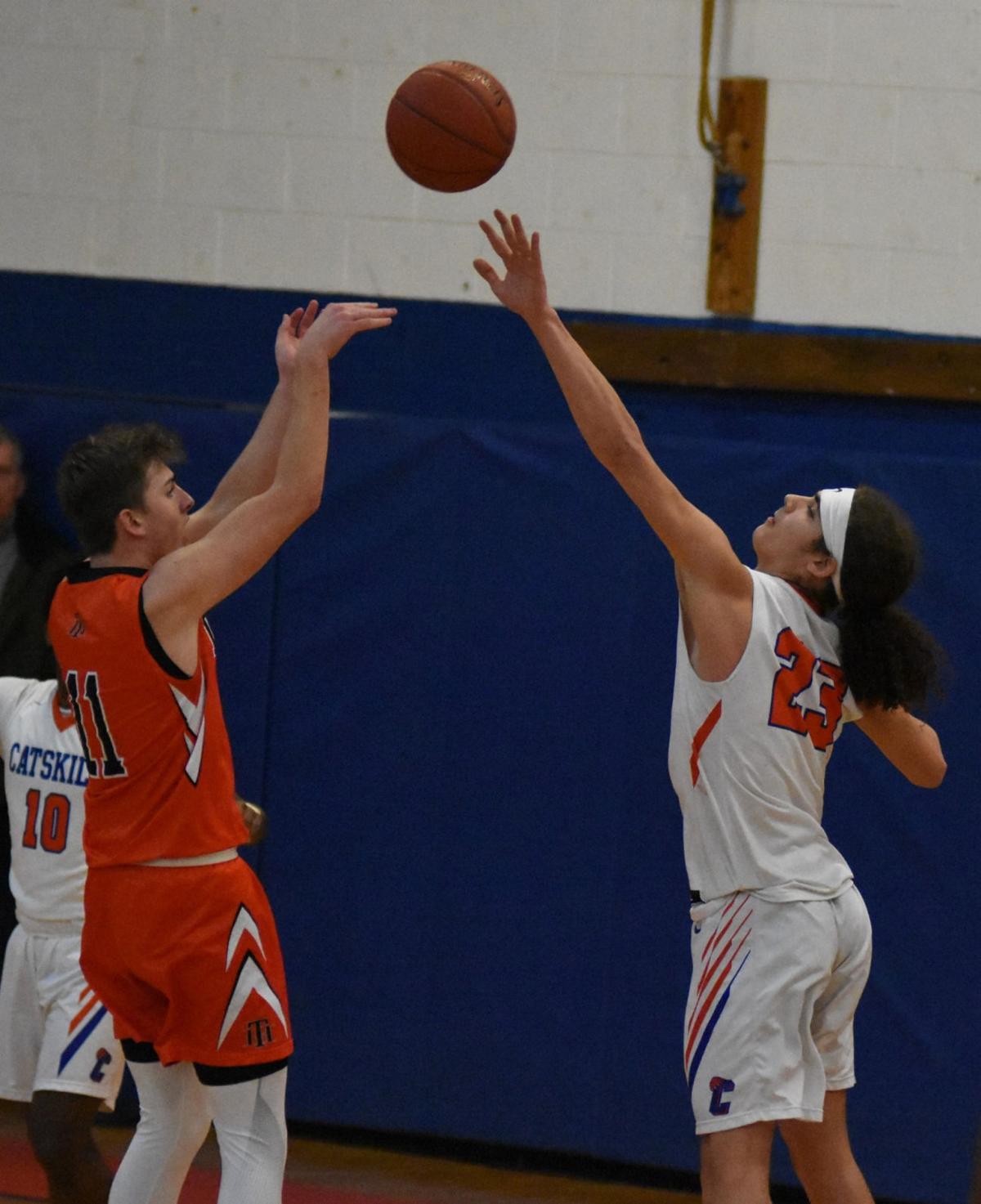 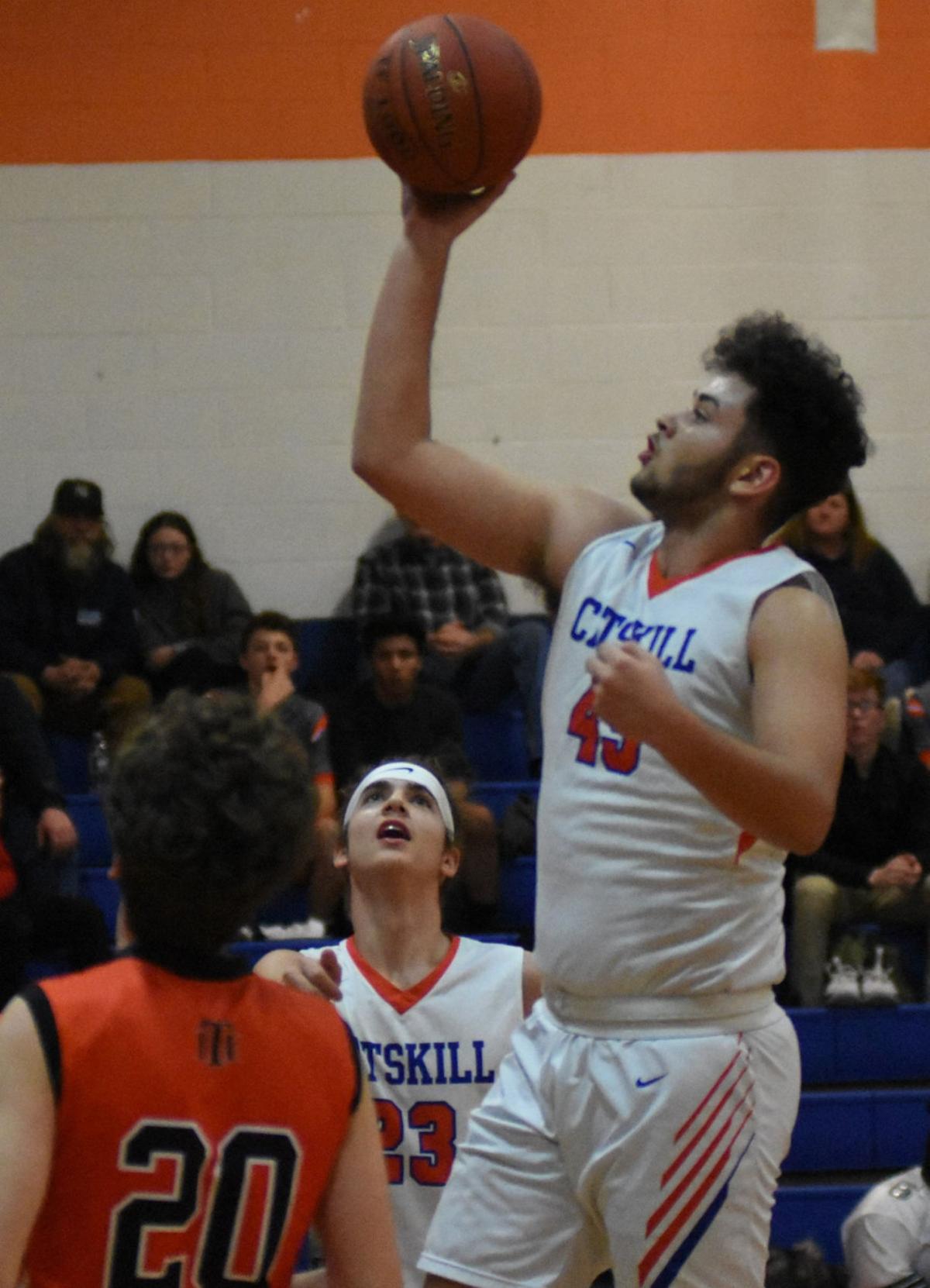 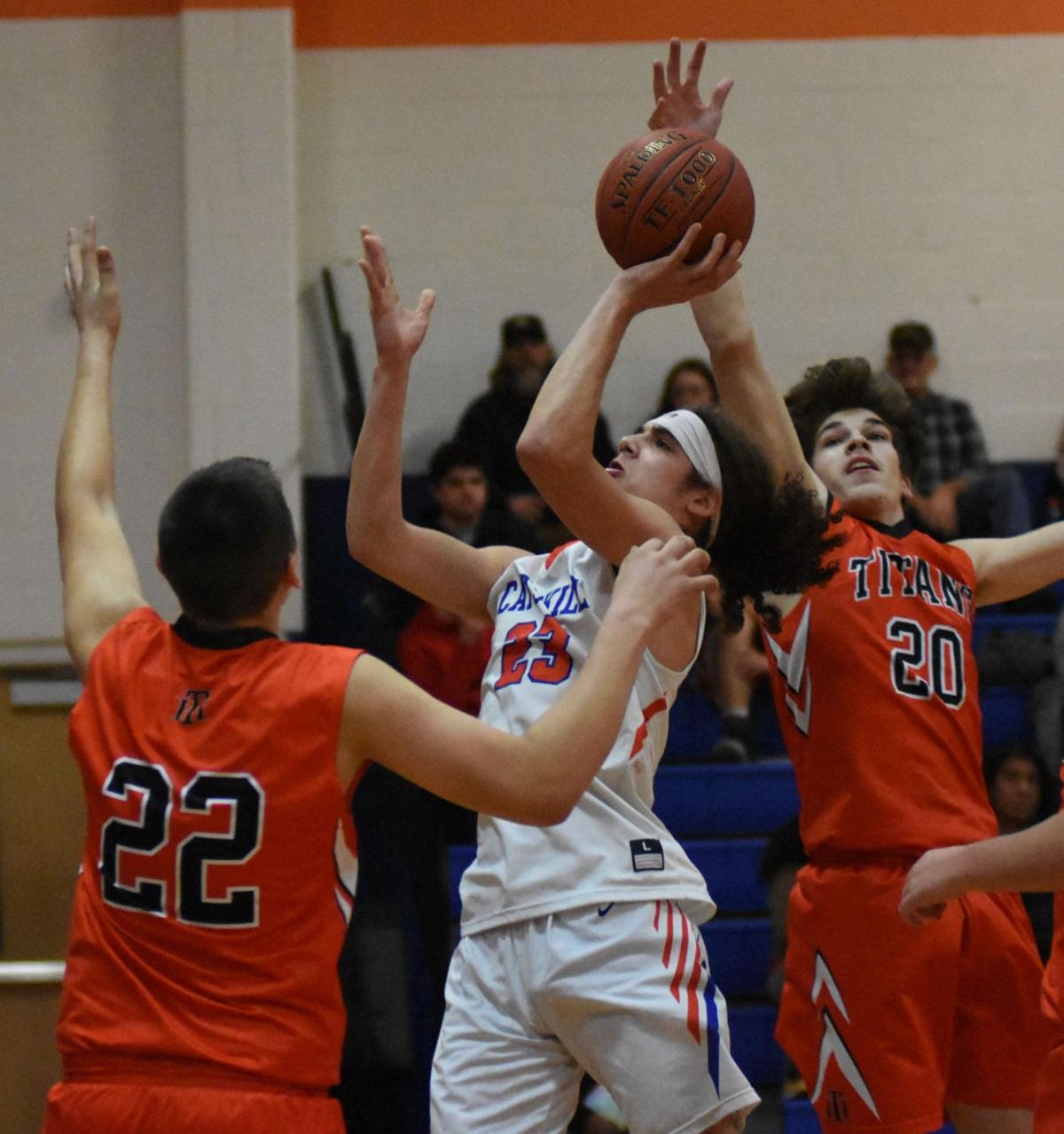 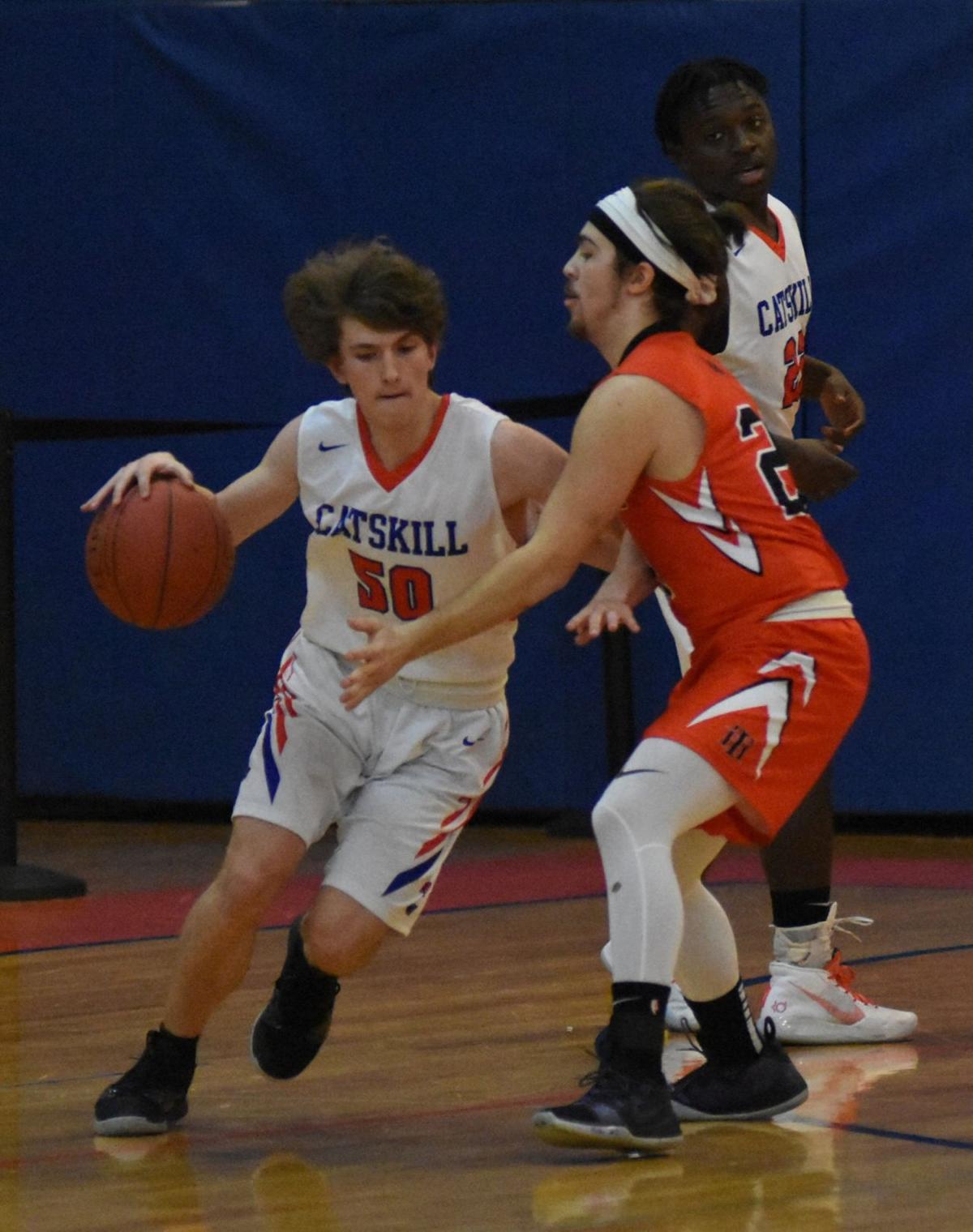 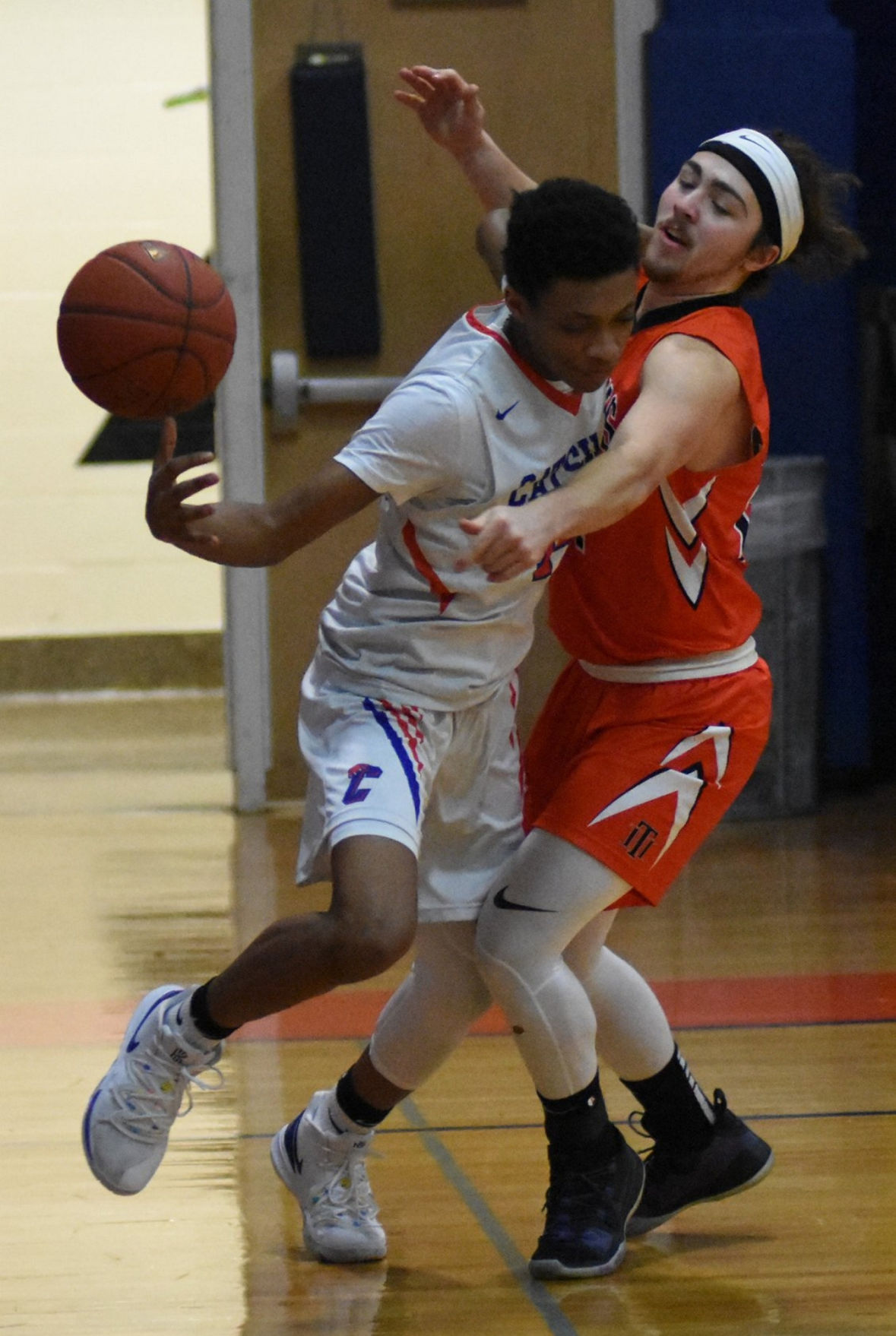 CATSKILL — On a night when senior DeVon Haye and coach Doug Lampman both achieved career miestones, Catskill clinced at least a tie for its eighth Patroon Conference boys basketball title in the past 10 years with a 97-35 victory over Taconic Hills.

Haye needed 22 points to reach 1,000 for his career and with his teammates feeding him the ball early and often, he became the 15th boys basketball player in school history to achieve the milestone on a putback with 6:02 to go in the second quarter.

“It was a very great experience, it was fun, it’s 1,000 points, it’s everything,” Haye said. “It’s a crazy feeling. Everybody was supporting me, everybody was trying to get me the ball to try and get it early to get it out of the way.”

Haye was appreciative of his teammates’ effort to get him the ball.

“I play with some phenomenal kids,” Haye said. “They gave me the ball when they needed to and I usually take advantage of it and get the bucket.”

Haye said he wasn’t focused on reaching the milestone.

“Not really,” he said. “It was more just let’s get the game over with, let’s get into sectionals and then move on to the state championship.”

While Haye didn’t give much thought to reaching 1,000 point, his classmates certainly did.

“That’s all I heard at school, ‘how many do you have left?’ Now it’s off my shoulders,” Haye said.

Lampman was thrilled that Haye reached his milestone, especially on his home court.

“The teachers love him, he works hard in the classroom, he’s totally appropriate always, and then reports to the gym for practice after school. Athletes like that are a lot of fun and I’m glad that he’s able to be honored with 1,000 points. It’s definitely special any time you can have those type of achievements, especially for a kid like him.”

Lampman was especially impressed with how his team came together to achieve one common goal.

“What really stuck out in my mind about this game, I turned to Andy (Jones) and said ‘do you see what’s happening out there?’ When they were trying to get him his 1,000th point, everybody was locked in on that goal and that unselfishness is what we’ve been trying to preach year in and year out.

“That’s the beauty of our game. If you can play the game unselfishly and put all of your individual goals aside, it’s just beautiful. It was great that DeVon was honored, but how his teammates got him there tonight was absolutley beautiful. I’m going to keep that tape forever.”

Haye’s Dad, Henry, who was a standout player for the Cats in the late 80s, was beaming with pride at his son’s accomplishment.

“I’m very proud of my son,” Henry Haye said. “He’s got something I didn’t get, 1,000 points, and I’m very, very happy for him, very proud father. It’s a big achievement. A lot of people have come through Catskill and have not achieved that, so for him to be one of the guys that they put on that plaque, his name will be up there and something that will always be in the school is great. He can come back one day and maybe show his kids. I was happy to be there.”

The victory was the 300th of Lampman’s coaching career, but the milestone came as a surprise to the Cats’ veteran coach when Athletic Director Eric Joyce announced the accomplishment to the crowd at the conclusion of the game.

“I don’t really keep track of that, Eric kind of kept track of that years ago,” Lampman said. “I’m focused on so many other things, it’s hard to focus on that, but it’s a nice surprise for tonight. If you do it long enough we’ll all get there. I’ve been very fortunate to work with a lot of great athletes over the years, both at Prattsburg and here in Catskill.

“I never thought I’d make it to 300 wins, I honestly don’t think about that. You just try to make them better kids in the game of basketball and, hopefully, go on to do great things in their life beyond what they do in the gym, and I’m always trying to prepare them for that. This brings back a lot of memories. I’ve had a lot of neat teams in Western New York and here in Catskill. It’s a long time, it’s pretty cool.”

Lampman was proud that the Cats could clinch at least a share of another Patroon championship. They can claim the title outright with a victory over Greenville on Tuesday night.

“It’s an honor,” Lampman said. “We’re playing other schools in the area like us and to be able to consistently out a team on the court that can respresent night in and night out and win the Patroon. I don’t belittle the Patroon like I know a lot of people do. It’s neat to be able to compete time and time again with the schools that are like us. I feel really good about that.”