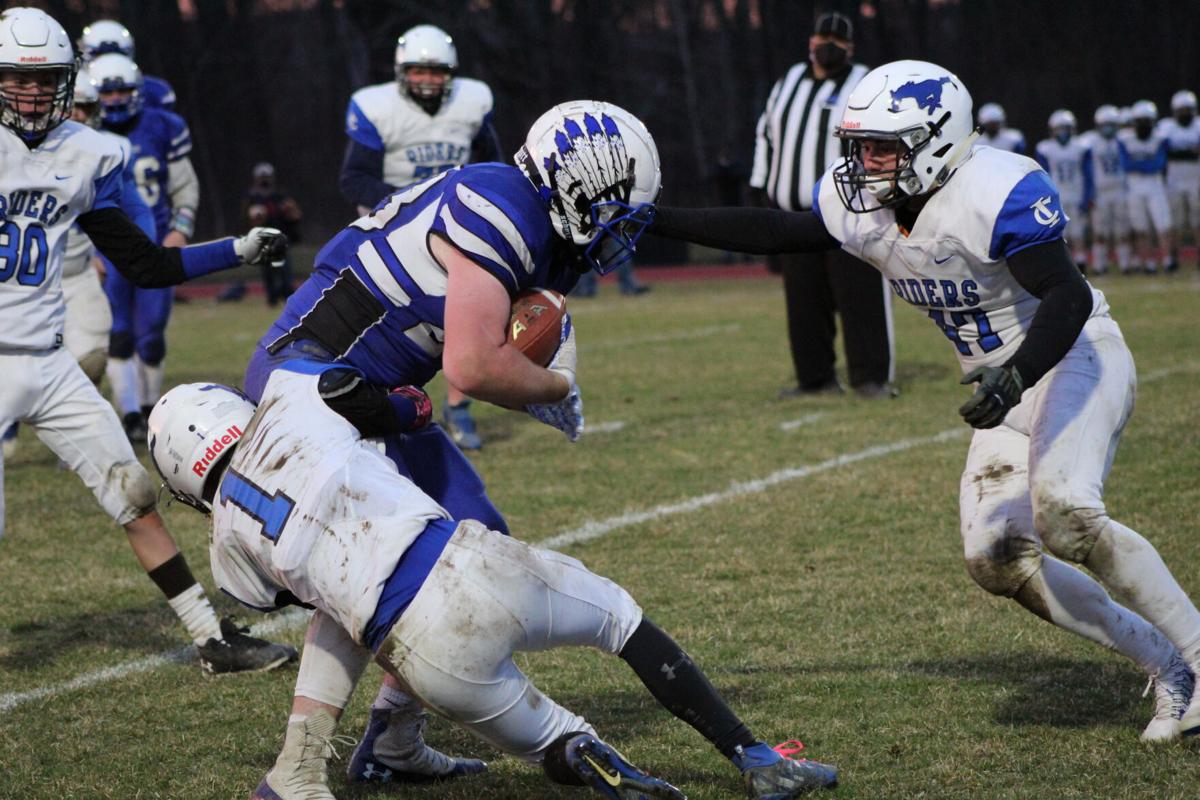 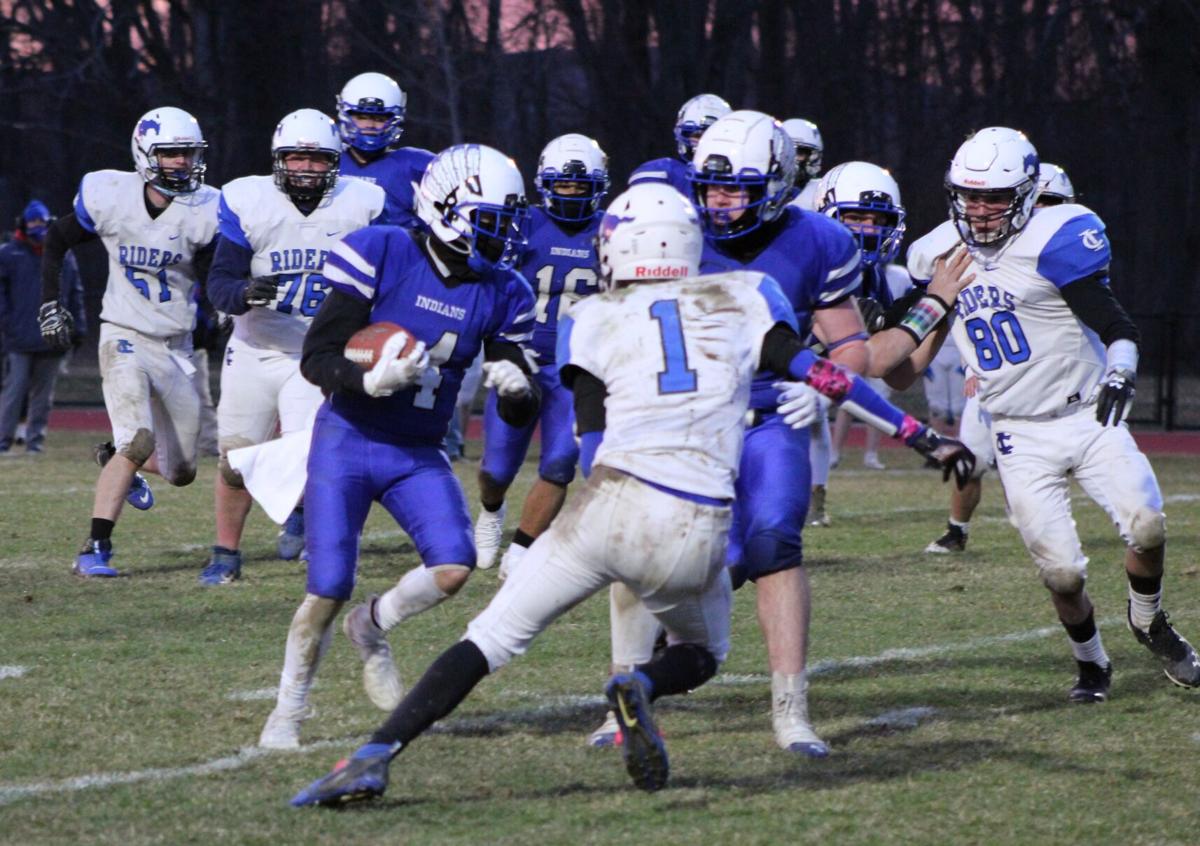 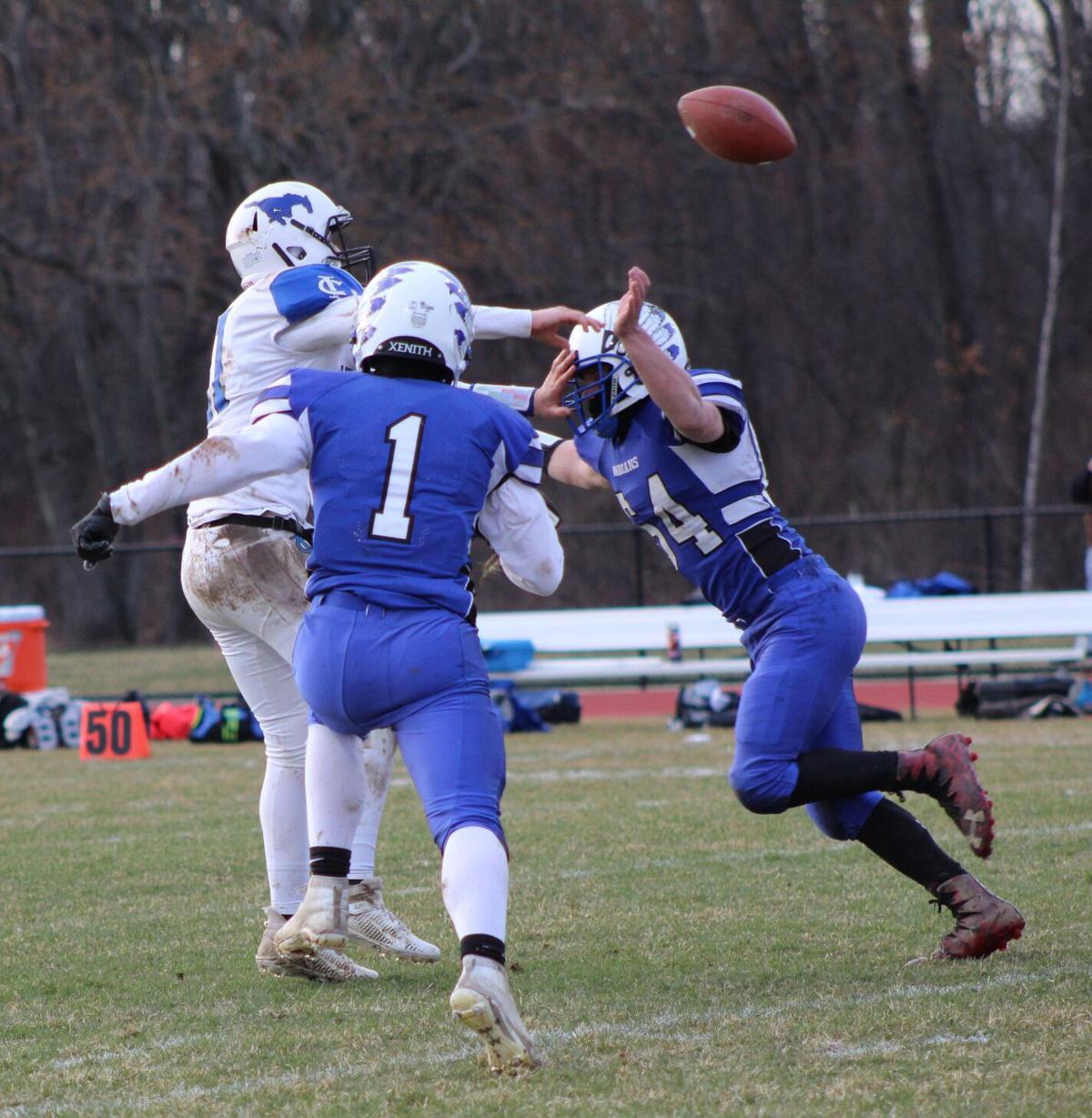 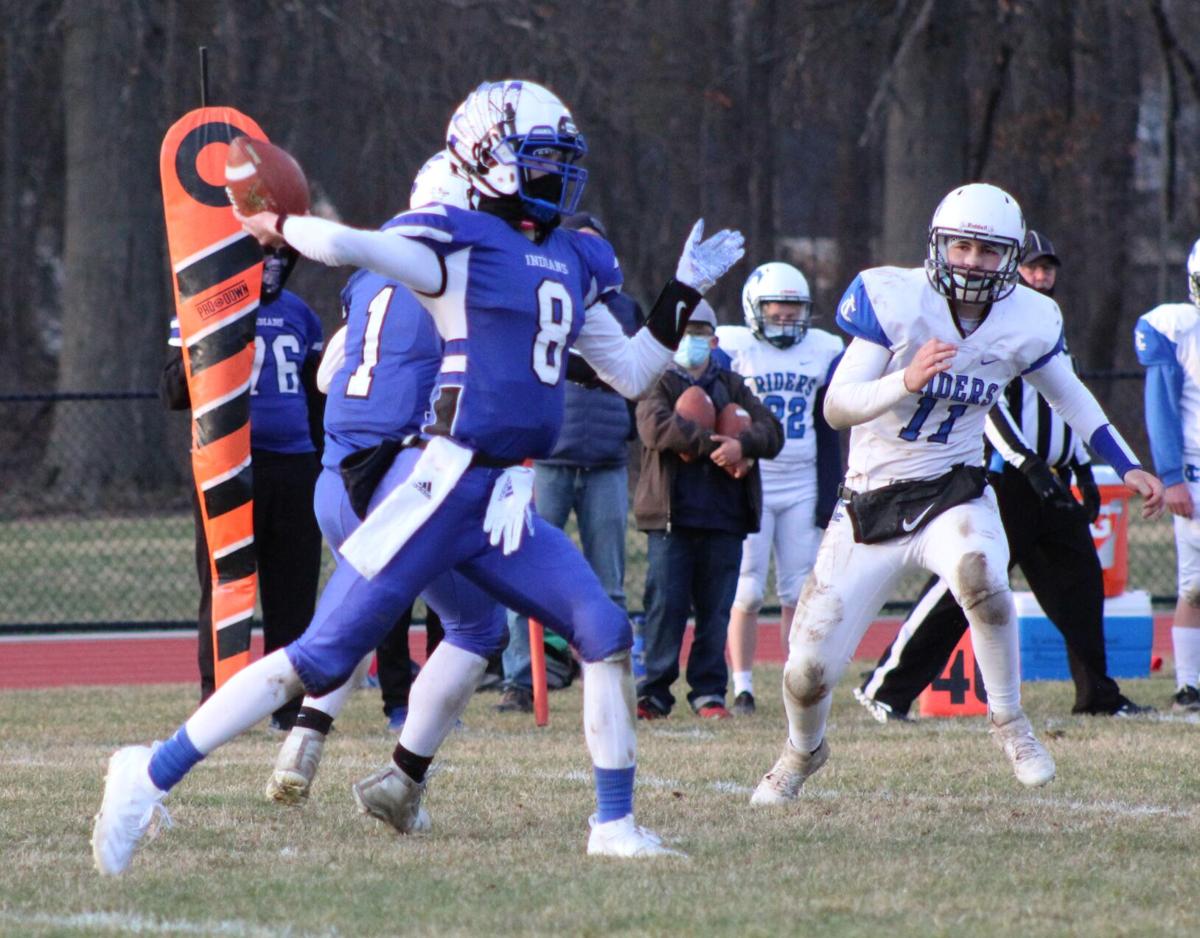 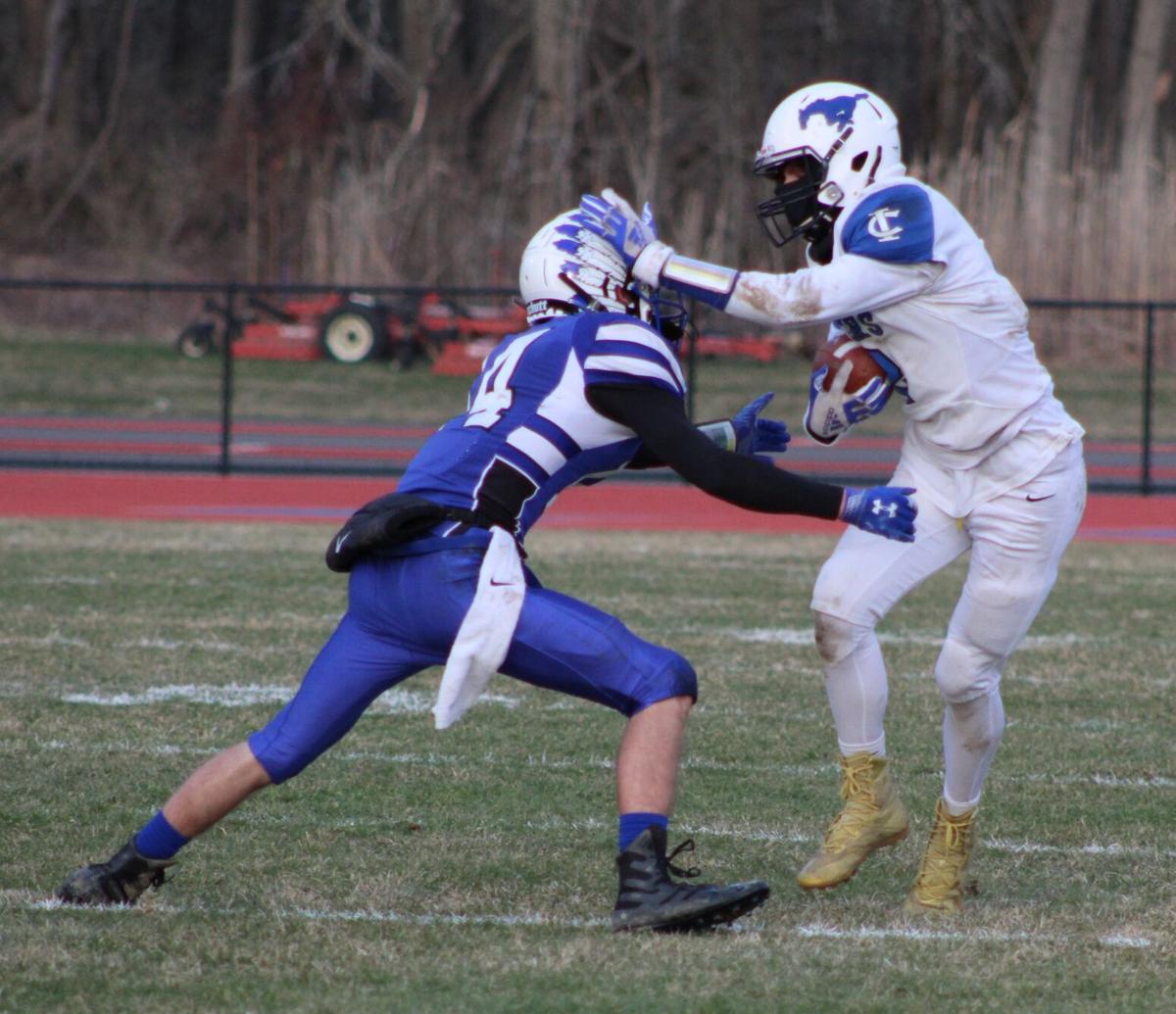 COXSACKIE — The Coxsackie-Athens Indians were too much for the Ichabod Crane Riders on Friday night, shutting them out, 19-0.

Though the scoreboard was lopsided at the end, both teams fought a tough battle in the blistering cold and frigid temperatures, that were exacerbated by the constant wind. Jason Craig had the biggest night for the Riders, gaining 55 yards on five carries and recording four tackles and an interception on defense.

Early in the first, the Riders took a timeout to draw up a play for a fourth down attempt. The Indians’ defense were ready for the play though, and caused an interception that they ran down to the opponents’ 34 yard line.

On the ensuing possession for the Indians, they too faced a fourth and short situation, but drew the Riders offsides for a fresh set of downs. On the next play, tailback Dillon Hynes took the handoff on a sweep to the right, and skirted up the field eight yards and into the endzone for the touchdown. The PAT was missed and Coxsackie-Athens led 6-0 midway through the first quarter.

On the next offensive possession for the Riders, Jason Craig had a massive run that took the ball to the opponents’ side of the field. However Ichabod Crane would squander this opportunity and turn it over on downs inside the 15 yard line. Cole Wagor took a draw up the middle for an Indians’ first down as the wind whipped around the entire field.

A few plays later, the quarter ended with the Indians facing a fourth and two. The Riders’ defense got a stop of their own on the first play of the second, plugging up the middle of the field to stop the Indians’ rushing attempt and get the ball back.

On the following drive the Riders turned it over again, this time via a forced fumble by the Indians, and they took over at their own 36. Brandon Wolbert had a huge completion for a first down shortly thereafter, rolling out to his right and delivering a pass, on the money, to Patrick McManus near the sideline. The huge gain was essentially negated on the following play however, as the Indians were called for holding.

Later in the period, Ichabod Crane led a drive down to Coxsackie-Athens’ 14 yard line, the closest they were to scoring all night. After a huge tackle brought up fourth down, a false start and an incomplete pass made for yet another turnover on downs for the Riders and they could not stop shooting themselves in the foot.

The Indians took the ball down the field rather quickly on their final touch of the half, but an offensive pass interference penalty stopped their momentum. The Riders forced an interception two plays later to end the half, but the Indians still led 6-0.

Coxsackie-Athens went three-and-out to start the third, and the Riders needed to capitalize when the Indians gave them multiple chances. After two first downs by Jason Craig, Patrick McManus lurked in the secondary, and picked off Rider quarterback Joe Penzabene for the interception.

Minutes later, Dillon Hynes broke for a big run for Coxsackie-Athens to move into Ichabod Crane territory with just over three minutes to go in the third. The Indians recovered their own fumble down at the five yard line to end the period, and were threatening to score again.

Thirty seconds into the fourth, Brandon Wolbert ran it in himself for the Indians’ touchdown, and they led the Riders 12-0 after a failed two point conversion. The Indians’ were methodical on offense this final quarter, and still extremely tough on defense for the Riders to handle, and they could barely mount any sort of offense.

Coxsackie-Athens’ defense forced another turnover on downs by the Ichabod Crane offense, and the Indians took over at mid-field. With just over five minutes left in the game, the Indians forced another fumble, this time it was Brandon Wolbert’s turn to strip the ball and give the offense another red zone opportunity.

Wolbert took advantage of his own hustle on defense, and connected with Hynes on a touchdown pass late in the fourth quarter. After the kick from Spencer Tergeoglou was successful, Coxsackie-Athens led 19-0 and all they had to do was run the clock and coast the rest of the way.

The Indians’ defense would not be outdone by their offense however, and they had still one more forced fumble to add to the stat sheet with 2:01 left in the game. The Indians ran for a first down on the possession following the turnover to seal the deal and continue their streak of holding opponents scoreless.