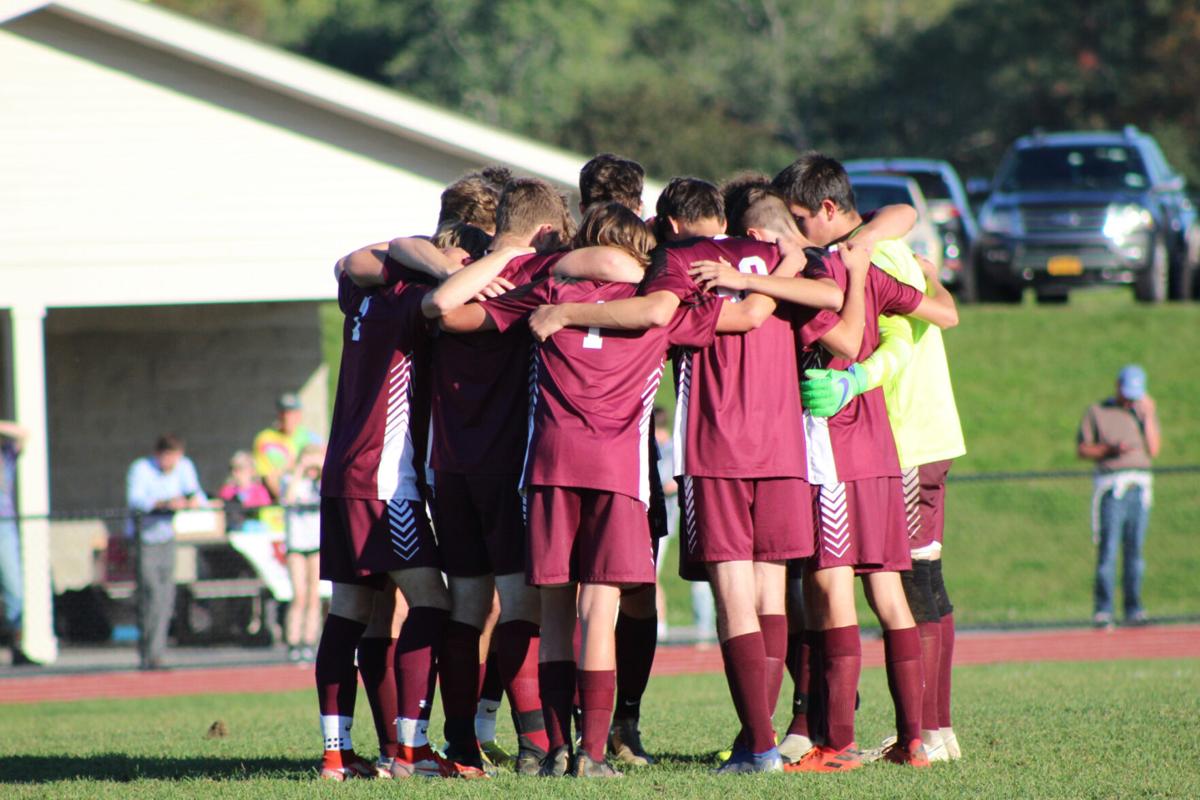 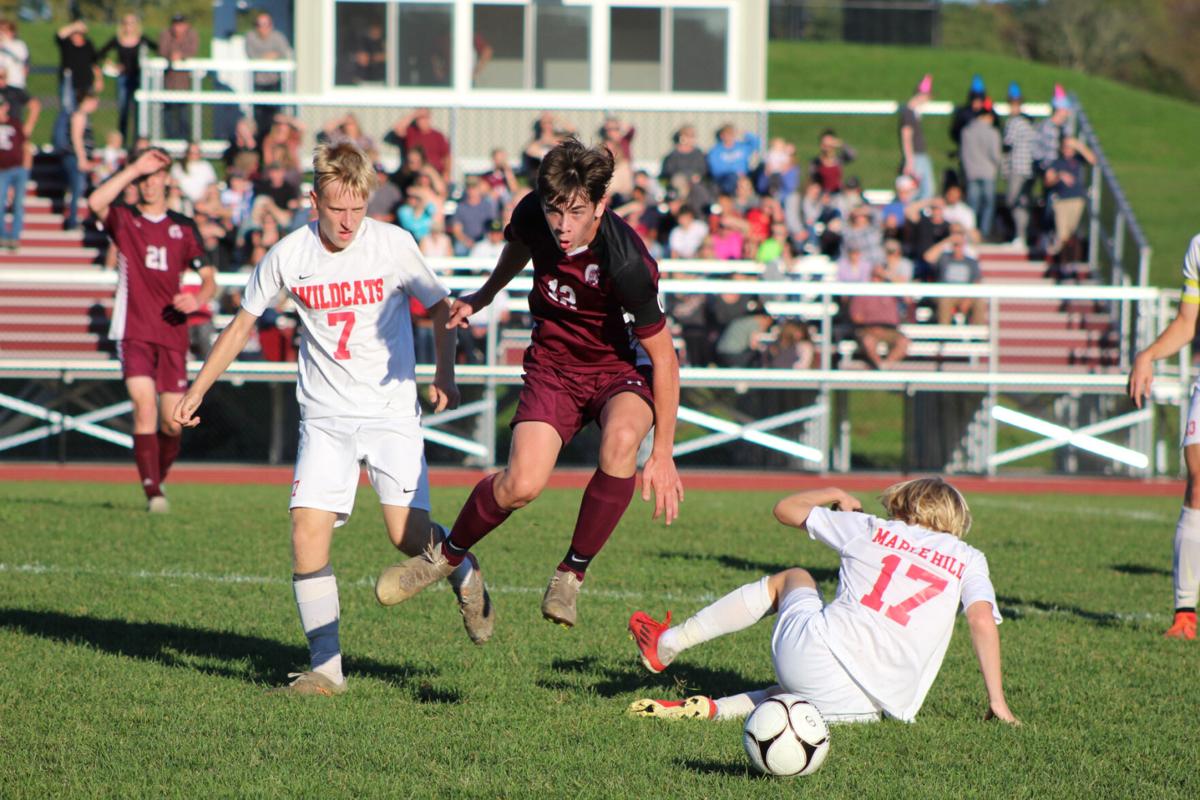 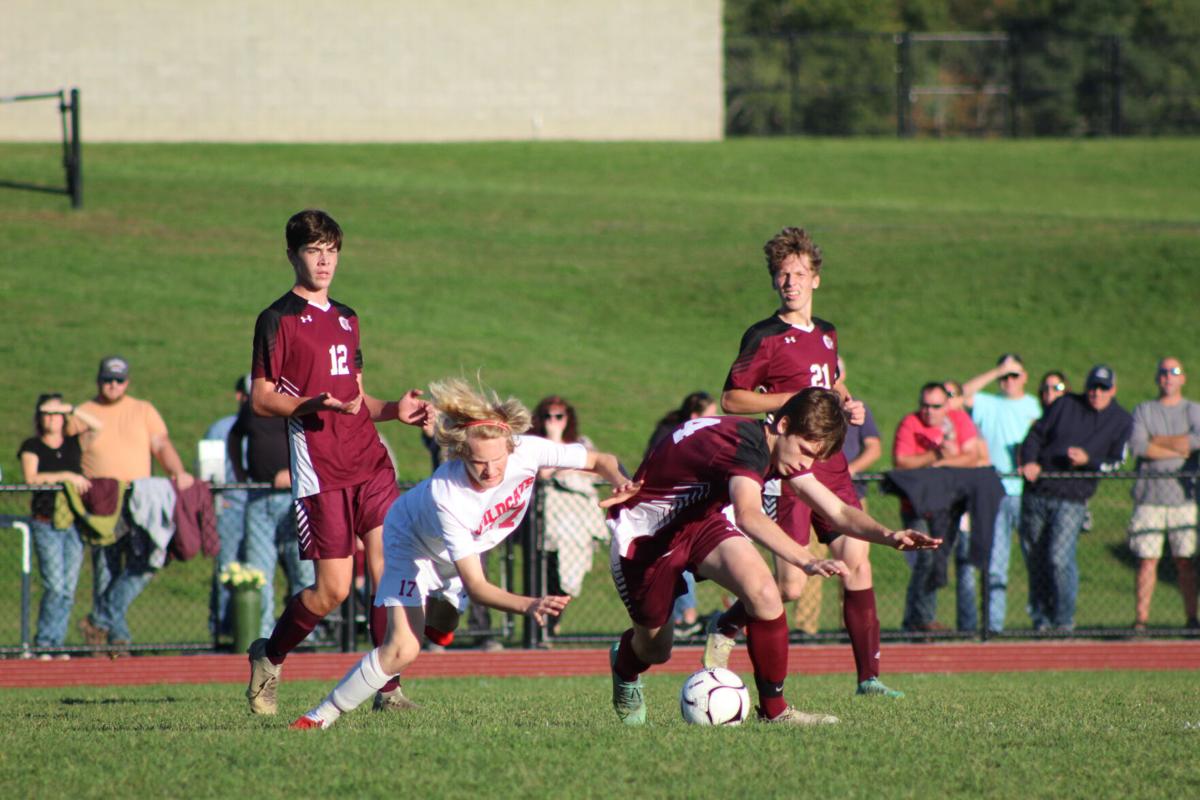 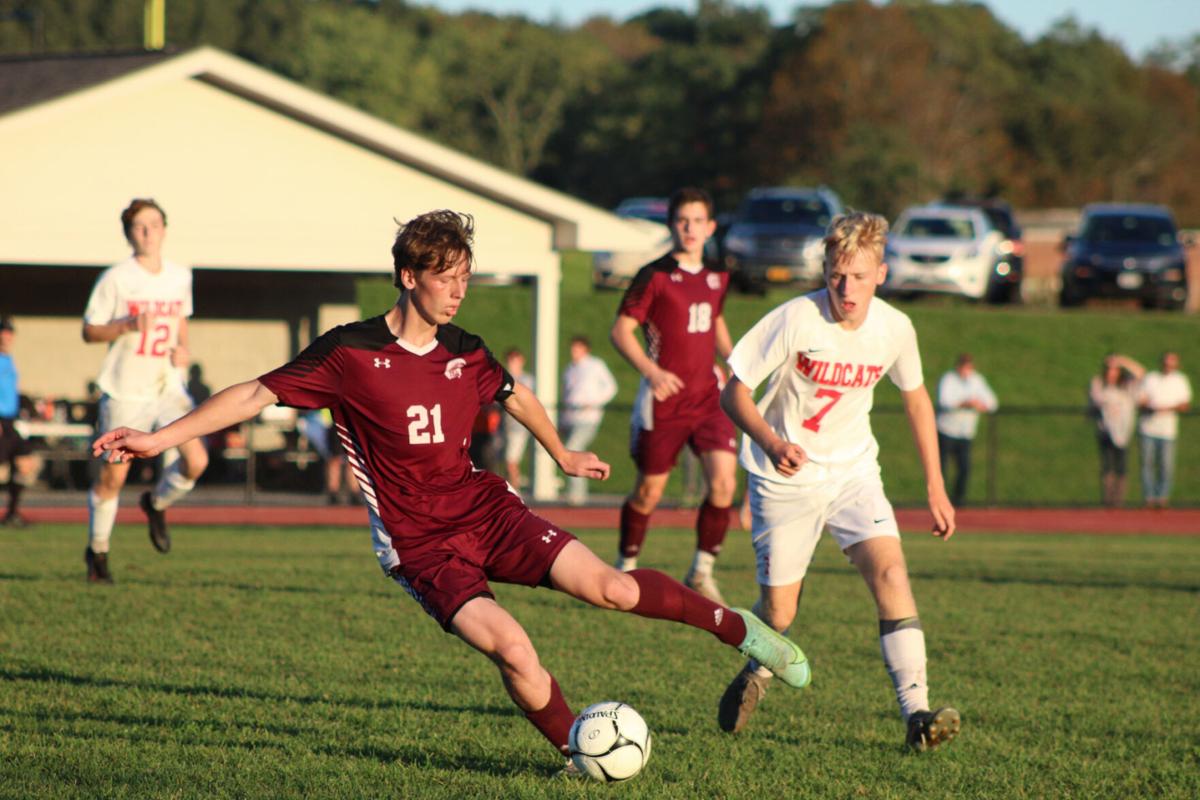 GREENVILLE — The Greenville Spartans handed the Maple Hill Wildcats their first loss of the season 5-0 in Thursday in a battle for supremacy in Patroon Conference boys soccer.

The Spartans furthered their undefeated season on senior night, thanks to two goals each from Liam Bowden and Joseph Davis, as well as another score by Caleb Motta.

Greenville controlled the ball from the opening whistle and put the first shots on net of the contest. Spartan Jack Motta had a shot on goal early that sailed high over the crossbar and out for a goal kick. Teammate Evan Cotter had put a shot towards the goal as well but it went wide to the left and out as well.

Wildcat keeper Luke Hoffman stayed busy throughout the first half with these early attempts by the Spartans as they came early and often. Hoffman punched out and caught multiple passes that came through the box and denied many opportunities that Greenville had. Joey Domermuth was no slouch for Greenville though, redirecting play as needed when the Wildcats did get down into the box.

With under 15:00 to go in the first half, Greenville still dictated the pace and attacked on offense often. A corner kick by Caleb Motta was the closest they had gotten to that point, but Maple Hill’s defense blocked two shot attempts by the Spartans after the pass.

After a pair of shots by Bowden from outside the box were denied or deflected, the third time was the charm and he buried it behind Hoffman’s head and into the net for the game’s first goal.

The Spartans led 1-0 now with under 9:00 to go before halftime. The Wildcats looked to tie it before the break and got inside the box with a free kick, but the second touch shot the ball off of the crossbar and out of the zone.

After another unsuccessful free kick by Maple Hill, Greenville earned one at the other end and Caleb Motta scored on a header with only a few seconds before halftime, putting the Spartans up 2-0.

With the confidence of a 2-0 to start the second half, the Greenville Spartans looked to keep their foot on the gas pedal. The Wildcats came out of the break aggressive as expected, but the Spartans stayed disruptive on defense.

Maple Hill had a breakaway chance after a steal, but they gave it right back after the pass went across the field to no one. The Spartans had a broken play of their own and Joseph Davis took a shot inside the box and scored his first goal of the night, extending the lead to 3-0.

To Greenville’s delight, Davis scored again six minutes later, this time from far outside of the box, putting the game pretty much out of reach for the Wildcats.

Maple Hill continued to have communication issues on the field, flat out not talking to their teammates as they tried to run plays, contributing to much of their difficulties in the game. With under 20:00 left in the game, the Wildcats still had trouble just maintaining possession down 4-0 with the Spartans not relenting on their defense.

Greenville was content to milk the clock as long as they could and wear down Maple Hill. After a pass from the corner, Bowden scored his second goal of the night with a shot that found the top right corner of the net, putting the game away for good with four minutes to go.

The Spartans ran the clock down in the final few, winning 5-0 on senior night over the Maple Hill Wildcats. With the win Greenville cements their place at the top of the Patroon Conference for the regular season and remain unbeaten, as Maple Hills dropped its first game of the year.