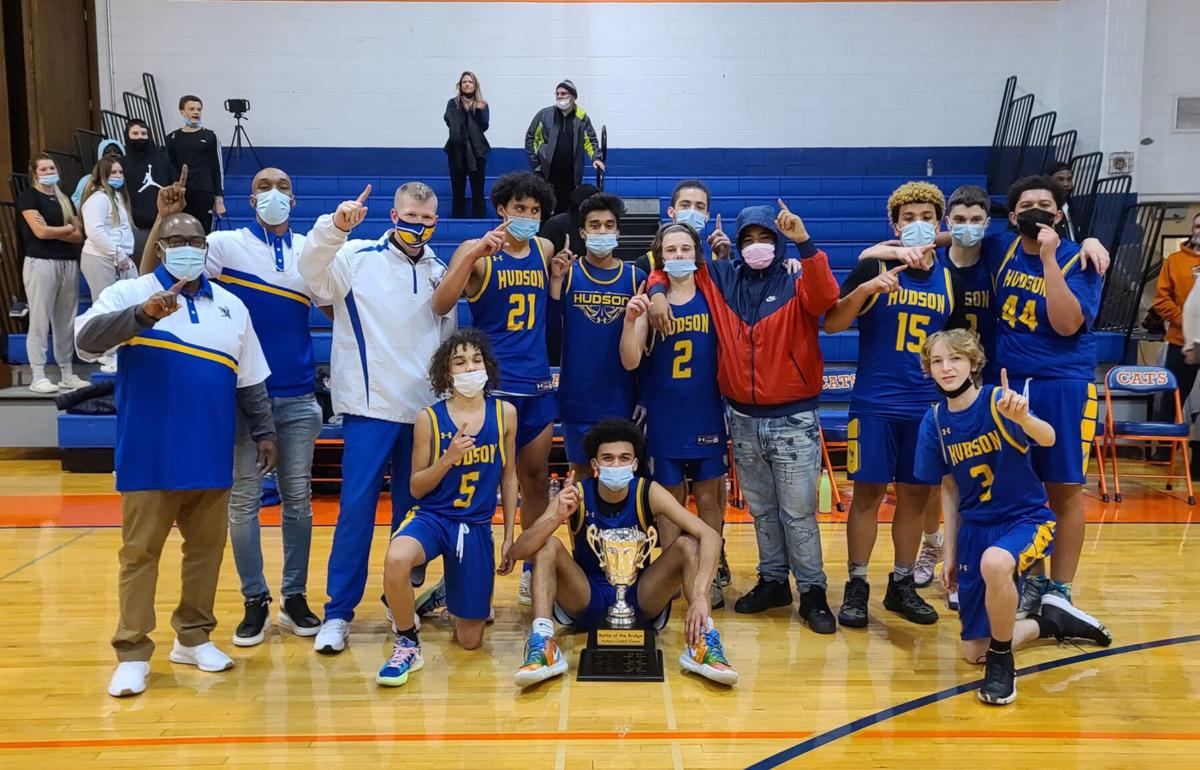 Tim Martin/Columbia-Greene Media Hudson won the Battle of the Bridge Trophy with a 56-53 victory over Catskill on Tuesday at Catskill High School. 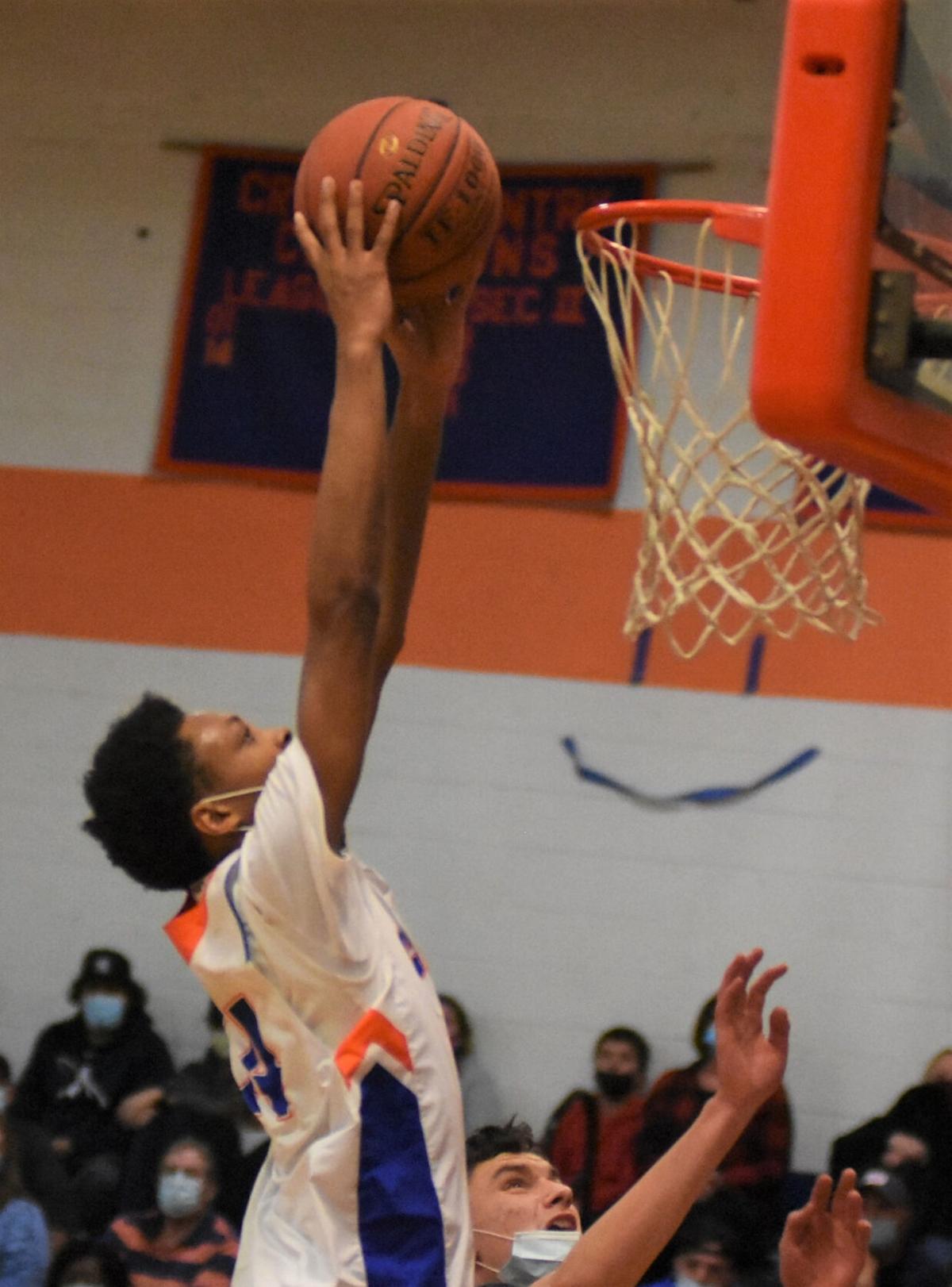 Tim Martin/Columbia-Greene Media Catskill’s Kellen Gibbs goes to the basket during Tuesday’s Battle of the Bridge game against Hudson at Catskill High School. 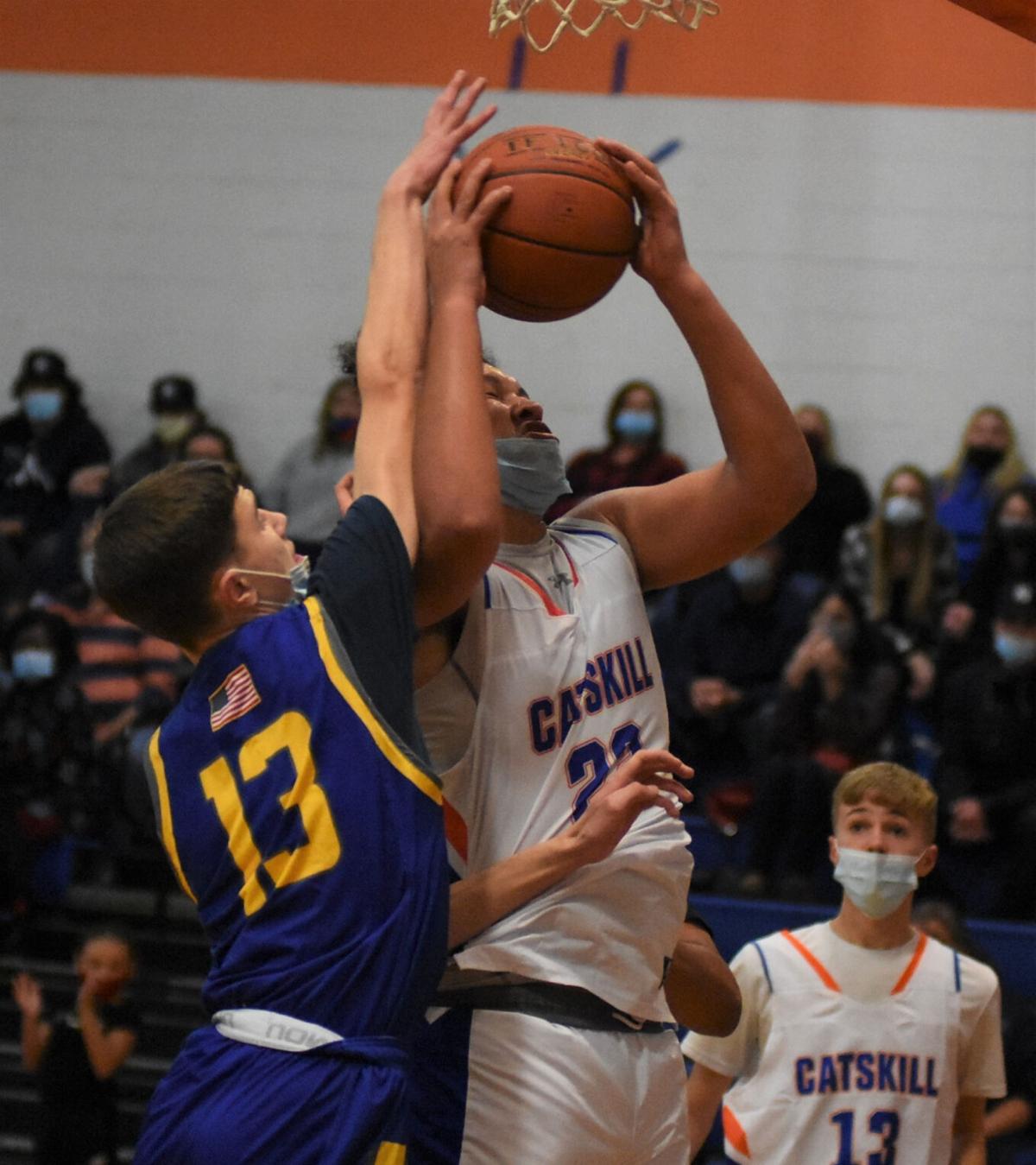 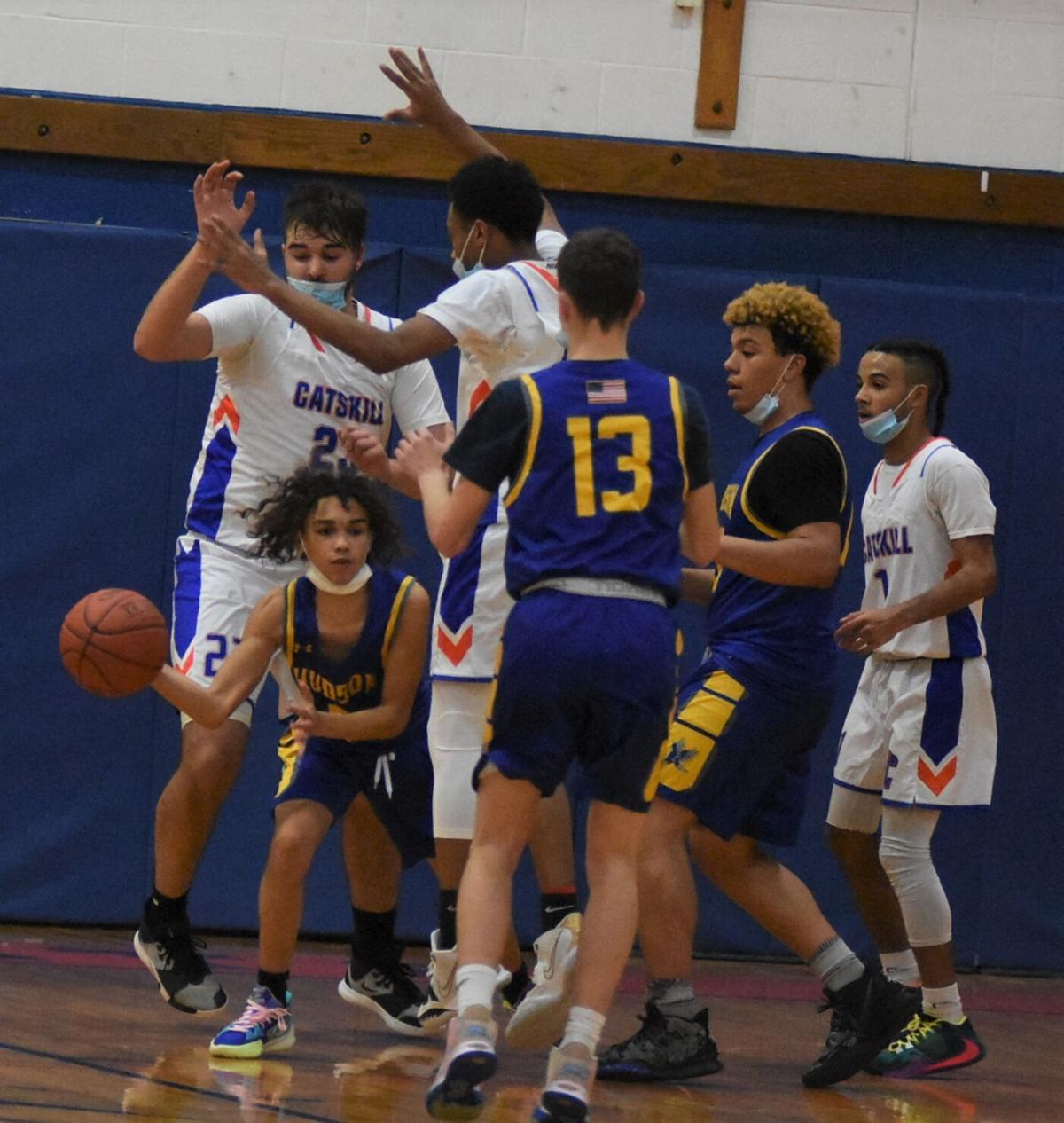 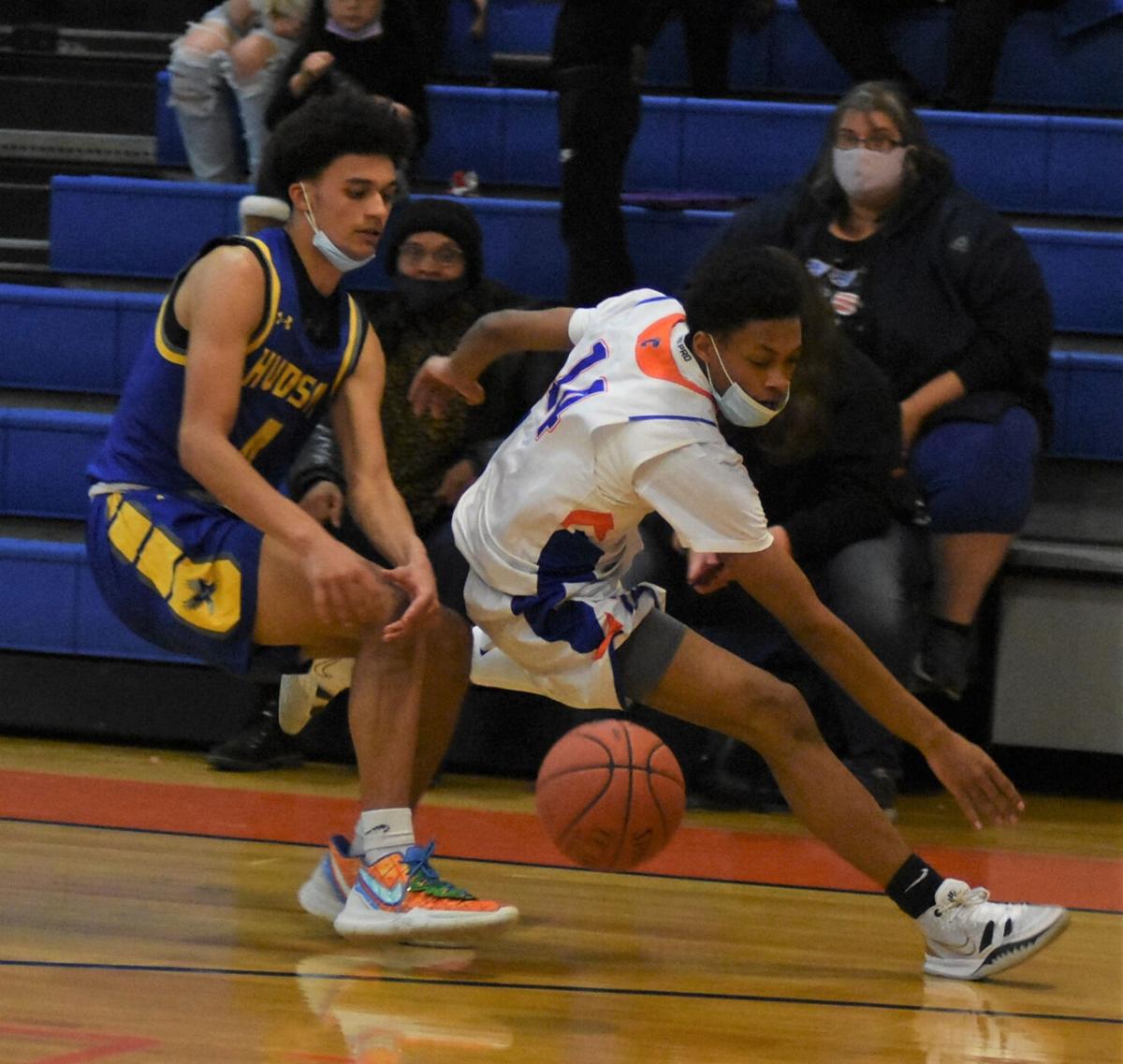 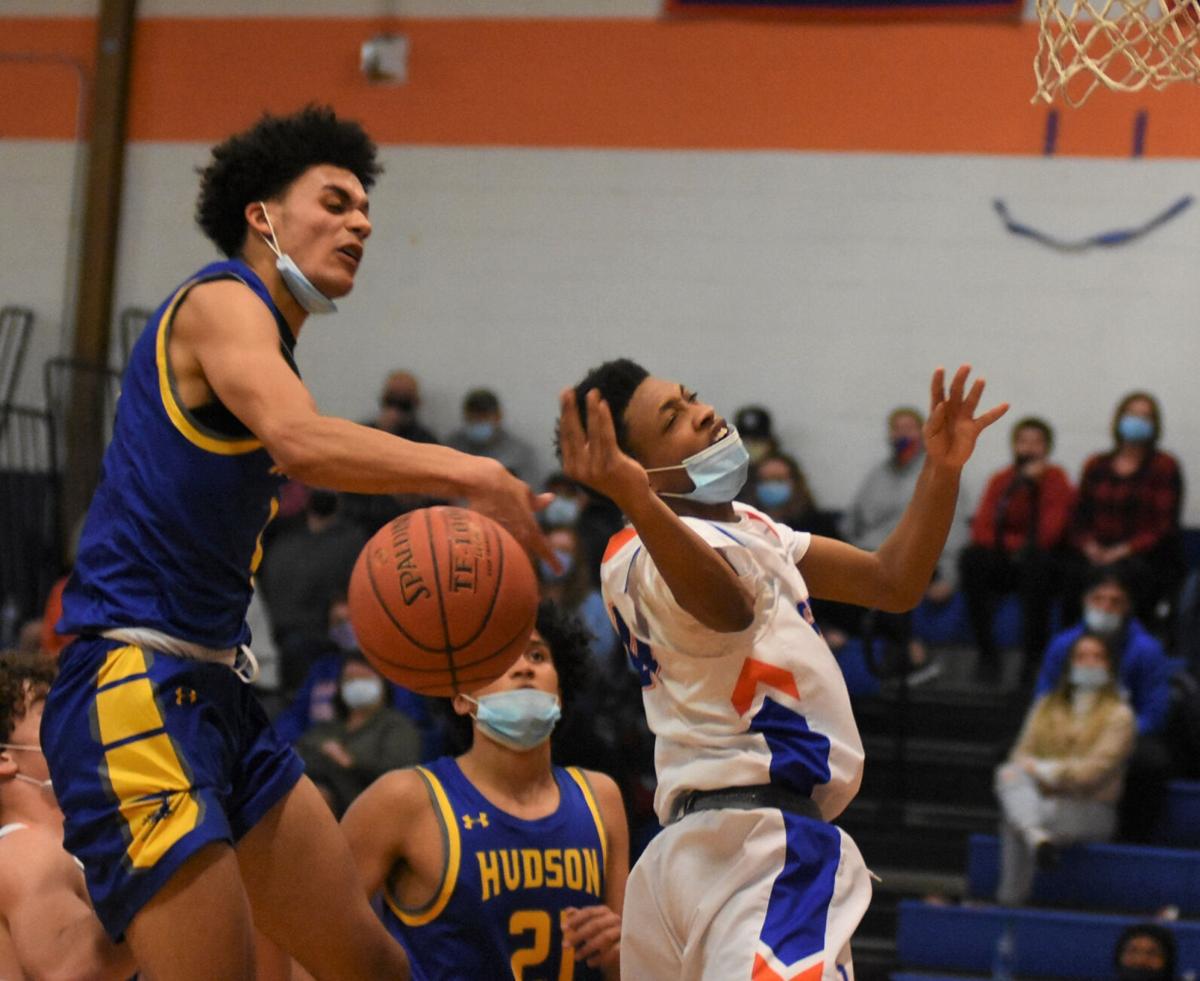 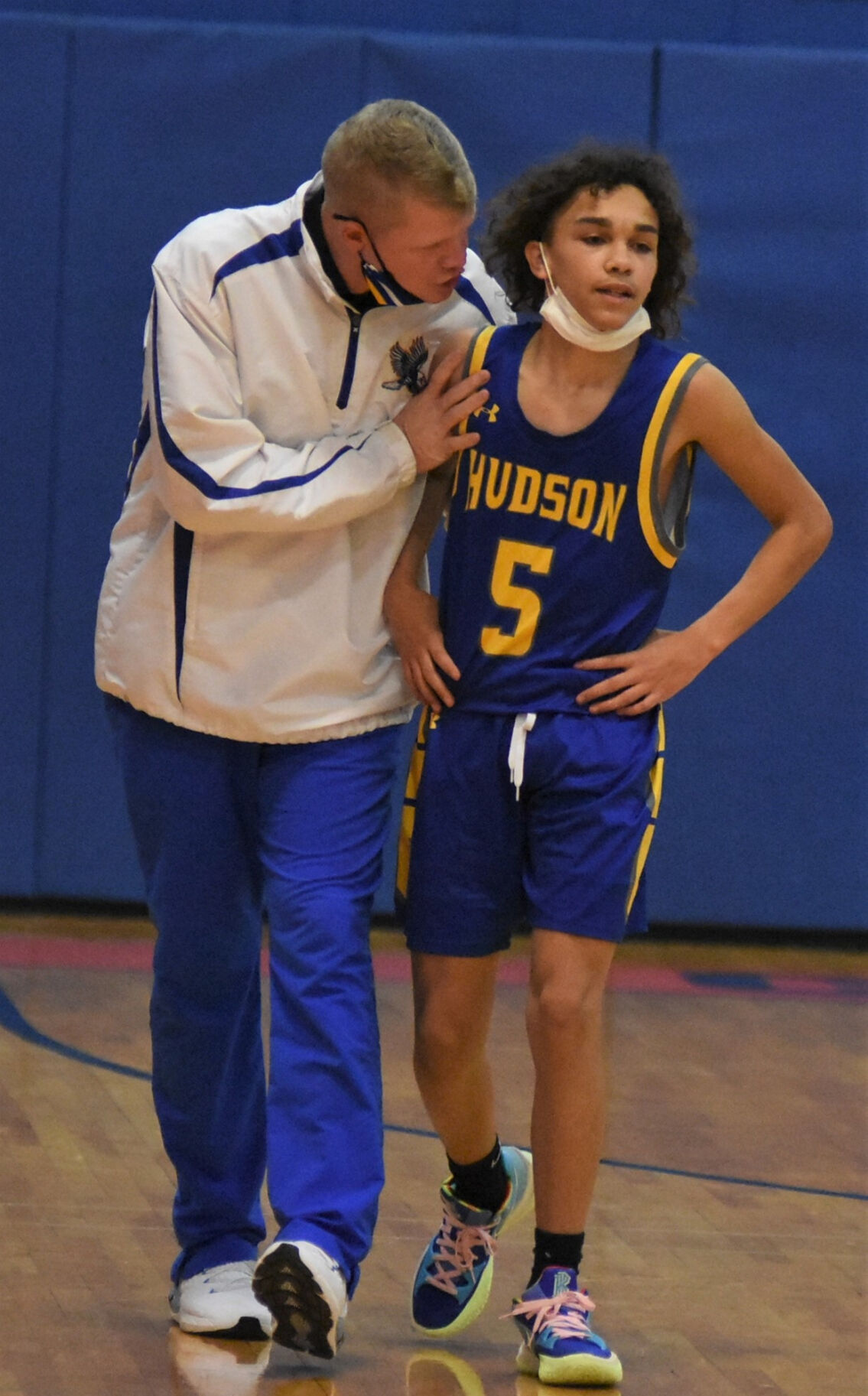 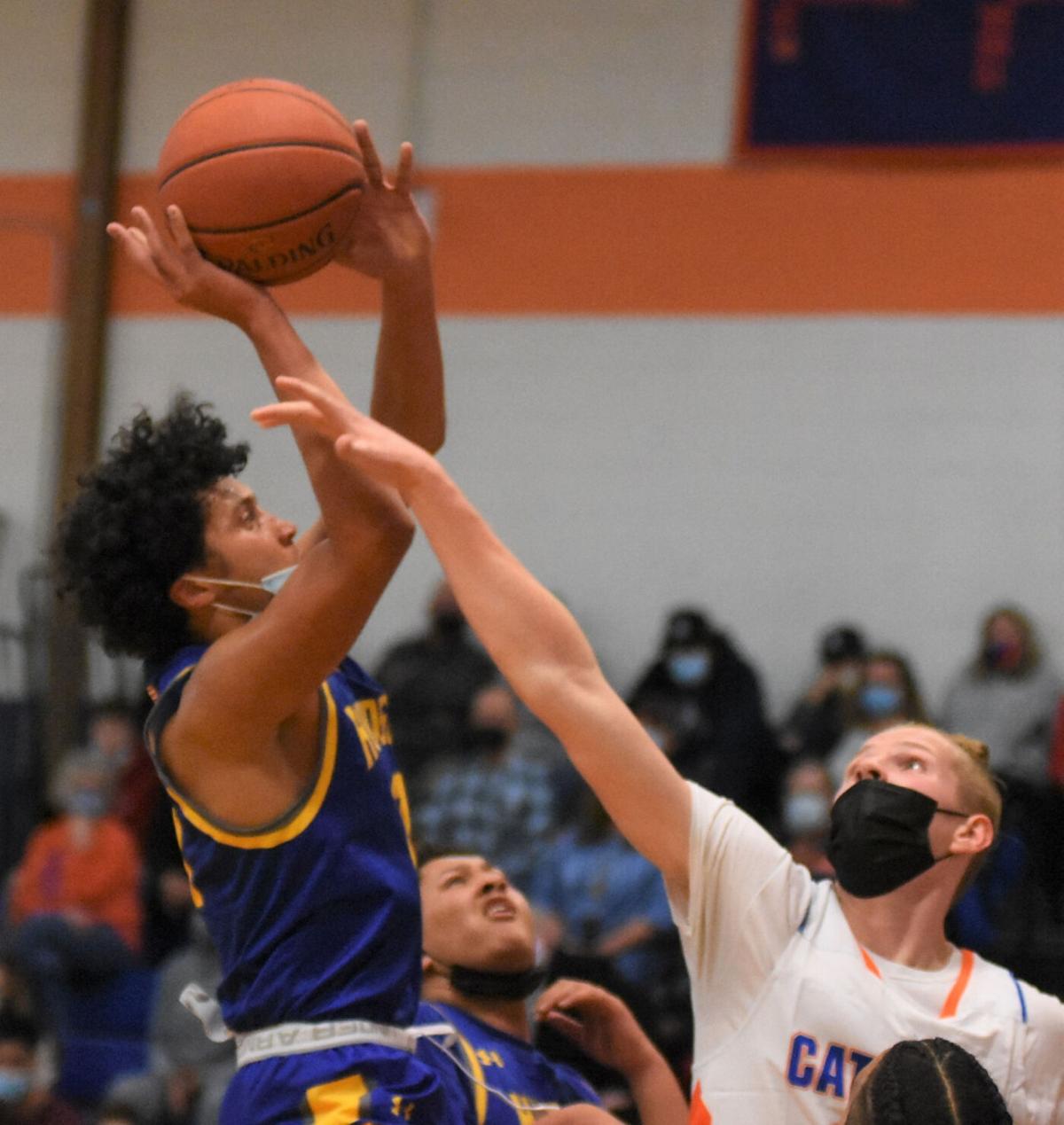 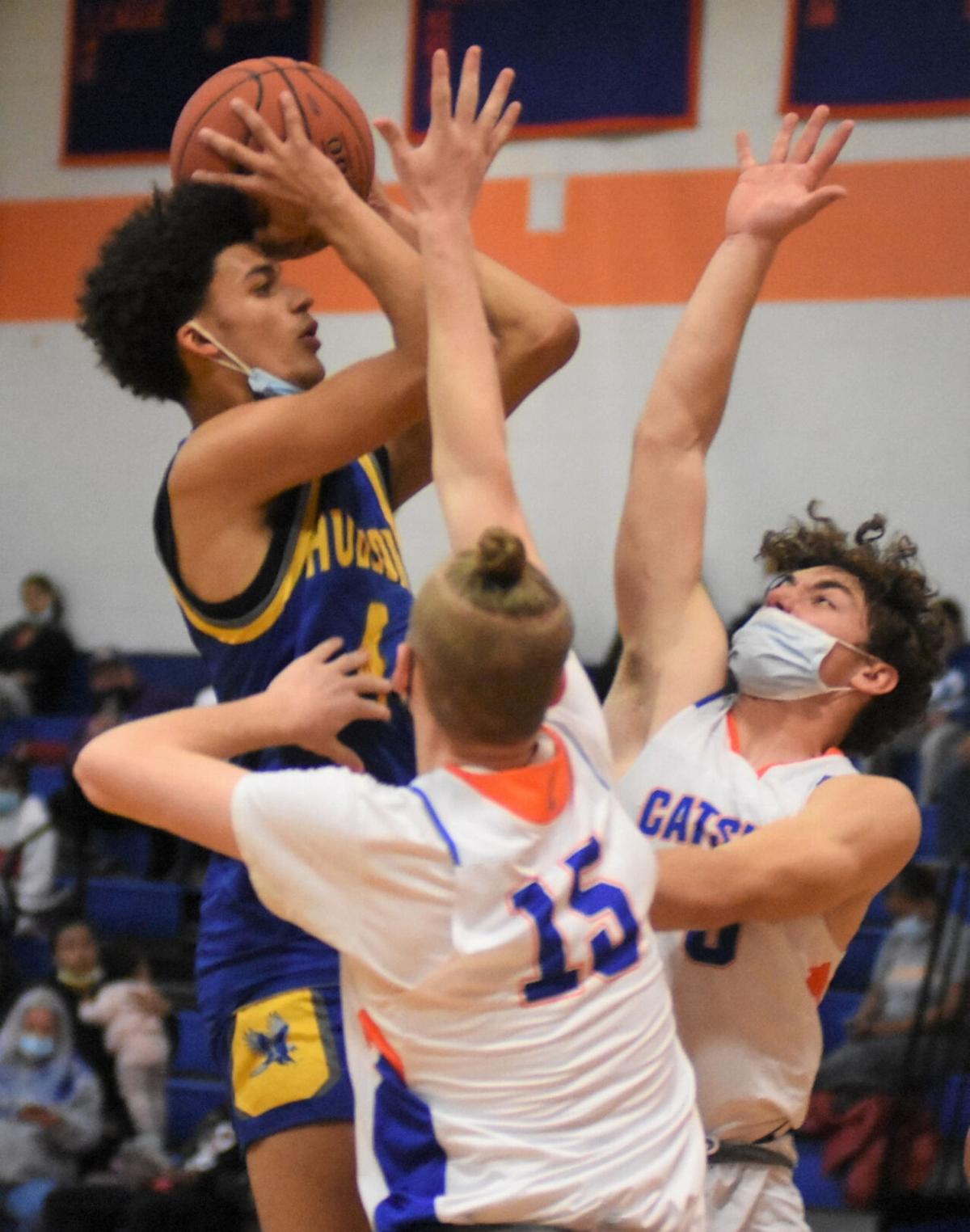 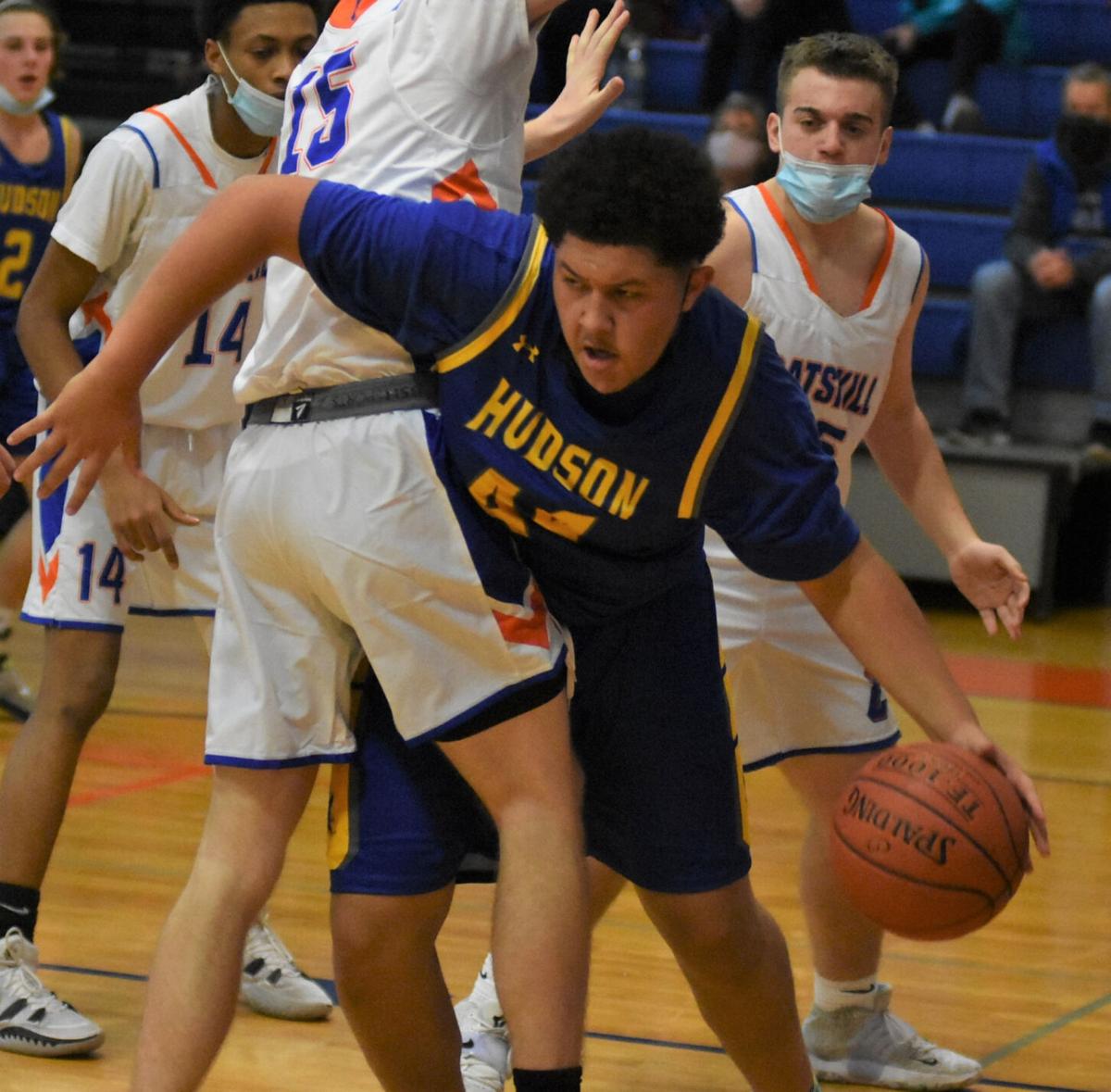 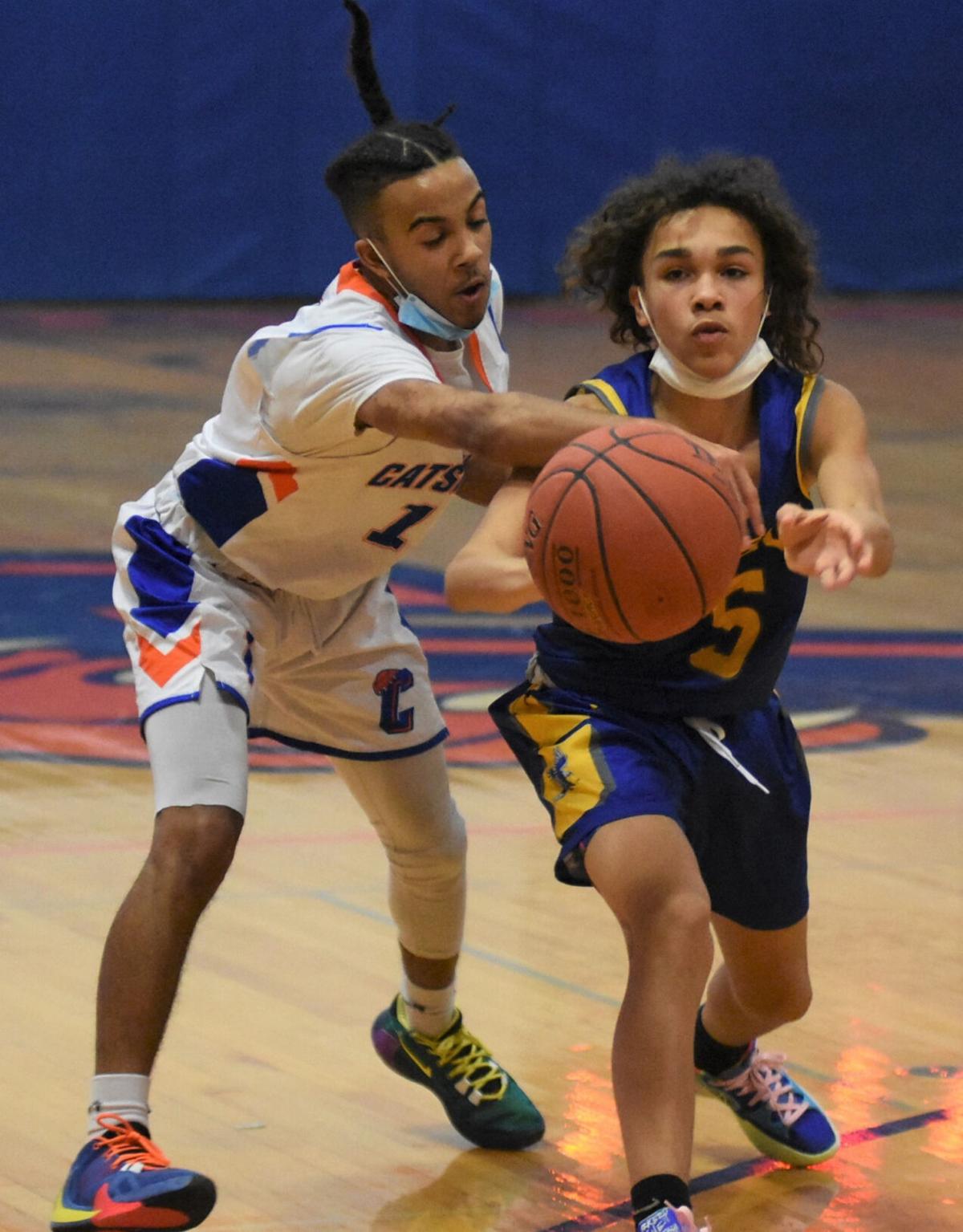 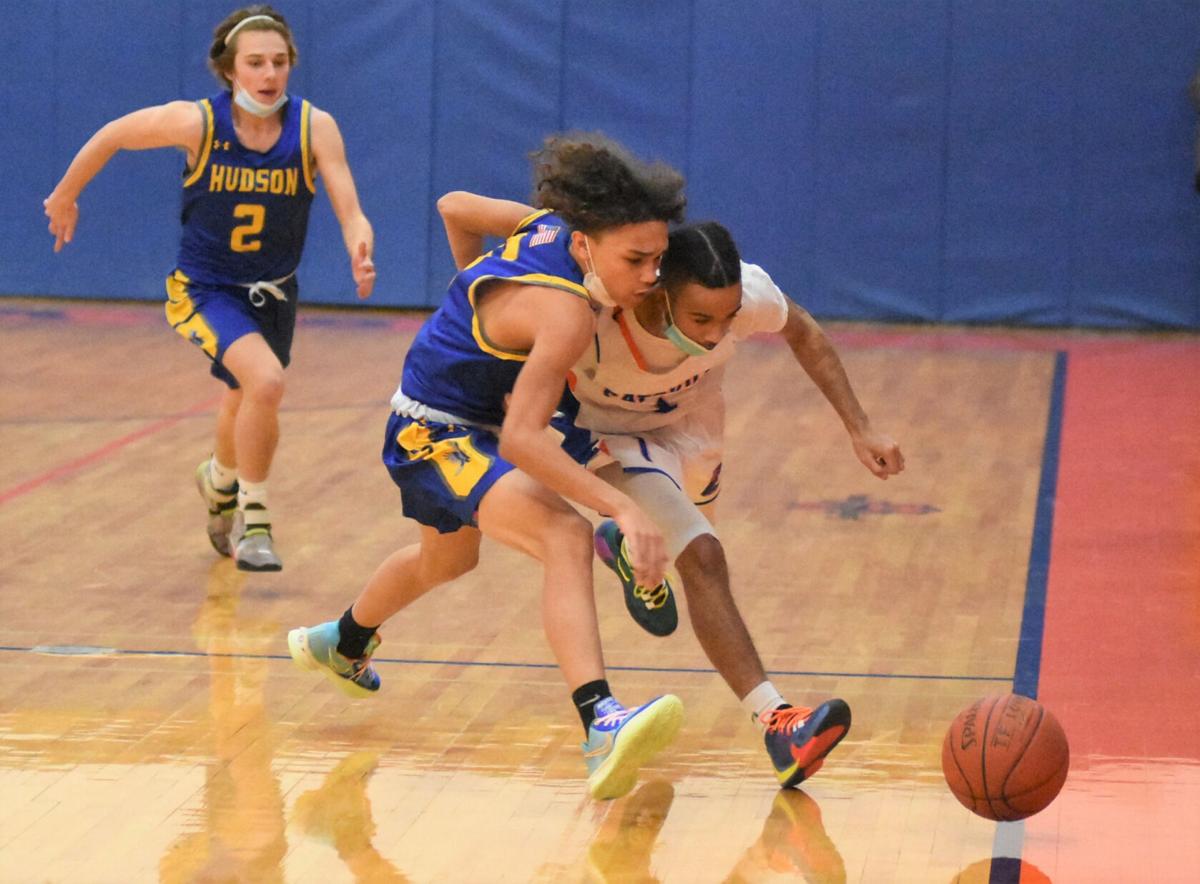 Tim Martin/Columbia-Greene Media Hudson won the Battle of the Bridge Trophy with a 56-53 victory over Catskill on Tuesday at Catskill High School.

Tim Martin/Columbia-Greene Media Catskill’s Kellen Gibbs goes to the basket during Tuesday’s Battle of the Bridge game against Hudson at Catskill High School.

CATSKILL — The Hudson Bluehawks were victorious in their 2021-22 boys basketball opener Tuesday night, defeating the Catskill Cats 56-53 in the Seventh Annual Battle of the Bridge game at Catskill High School.

Isaiah Maines led all players with 31 points for the Bluehawks, ten of which came in the fourth quarter. Sean Haye led the Cats with 17 points and Kellen Gibbs added 14 to balance out the offense for Catskill.

“We got down early, but we started playing better defense. We really got it after it on the defensive end and I thought we really did a nice job in that first half containing Sean Haye. We switched things up a little bit to kind of key on him and get some more help over there and it worked.”

Briscoe couldn’t have been more pleased with his team’s effort.

“We had some gutty performances by everybody on the floor,” Briscoe said. “We got into some foul trouble early. My two big guys had four fouls early and had to sit for a long time, but the bench guys really stepped up. I can’t say enough about Isaiah, he had a great game. He played his heart out and did everything for us on the floor.”

The Cats showed discipline in the passing game early, out-executing the Bluehawks in the opening quarter. Jordan Cunningham hit a three-pointer late in the first quarter to break up the run the Cats were on in the period. However, Gibbs and Haye combined for 16 points in the quarter and the Cats led 18-10 after one.

Hudson was successful in slowing down the Catskill offense in the second quarter and the Bluehawks chipped away at the lead. After forcing tough shots for the Cats, the Bluehawks cut the lead to five midway through the period.

Maines drove down the lane to initiate contact as he made the layup and earned a free throw as well. He completed the three point play and the lead was cut to 23-21. Dezmond Wallace fought for an offensive rebound on Hudson’s next possession and hit scored inside the paint to tie it at 23. Maines added another two free throws before the break, and the Bluehawks went up 29-27 at halftime.

The Bluehawks came out of the break with confidence and widened their lead to seven points within a couple of minutes. Catskill battled back though and after Patrick Darling failed to tie it at the free throw line, Haye was there to pick him up and hit the layup to put the Cats back up, 35-34.

Maines kept the pressure on however, and answered back at the other end yet again with another successful three point play. The Bluehawks took a three point lead 43-40 to the end of the third period, but it was still anyone’s game going into the fourth.

Hudson took advantage of the small break in the action again at the start of the fourth quarter, jumping out to an eight point lead to force Catskill to call a timeout with 6:34 left in regulation and regroup.

Maines came through in the clutch in the fourth period with ten points, following his shot on one possession to get the rebound off of the miss and lay it in to put the Bluehawks up by ten. The Cats inched closer 52-47 with 2:05 left in regulation when Kellen Gibbs went down with a left leg injury after showing a small limp minutes earlier.

Hudson was called for a double dribble and Catskill got the ball back down by three. Eddie Rogers missed a layup for the Cats as he looked to the referee for a foul call to no avail. After Maines drained yet another shot to bring the lead to three again, Azar Brantley stole the ball and knocked down a layup quickly to pull the Cats within one point of the lead.

After Maines was sent to the line one final time and made both foul shots to make it 56-53, the Cats had 10.1 seconds on the clock to get a shot at tying the game. The Cats took a final three point attempt and unfortunately for them it was off-line and the Hudson Bluehawks repeated as Battle of the Bridge Champions with a 56-53 road win over Catskill to open the 2021-22 basketball season.

“This means everything,” Briscoe said. “It’s why we started this thing because of this rivalry. It means a ton to me, it means a ton to the guys and it’s a great feeling to be able to get back on the bus and drive over that bridge with the cup.”

Hudson goes to Taconic Hills, while Catskill travels to Cairo-Durham on Friday at 6:30 p.m.

Ask HR: How to make the most of the current job market

How to refresh your remote work routine for the new year