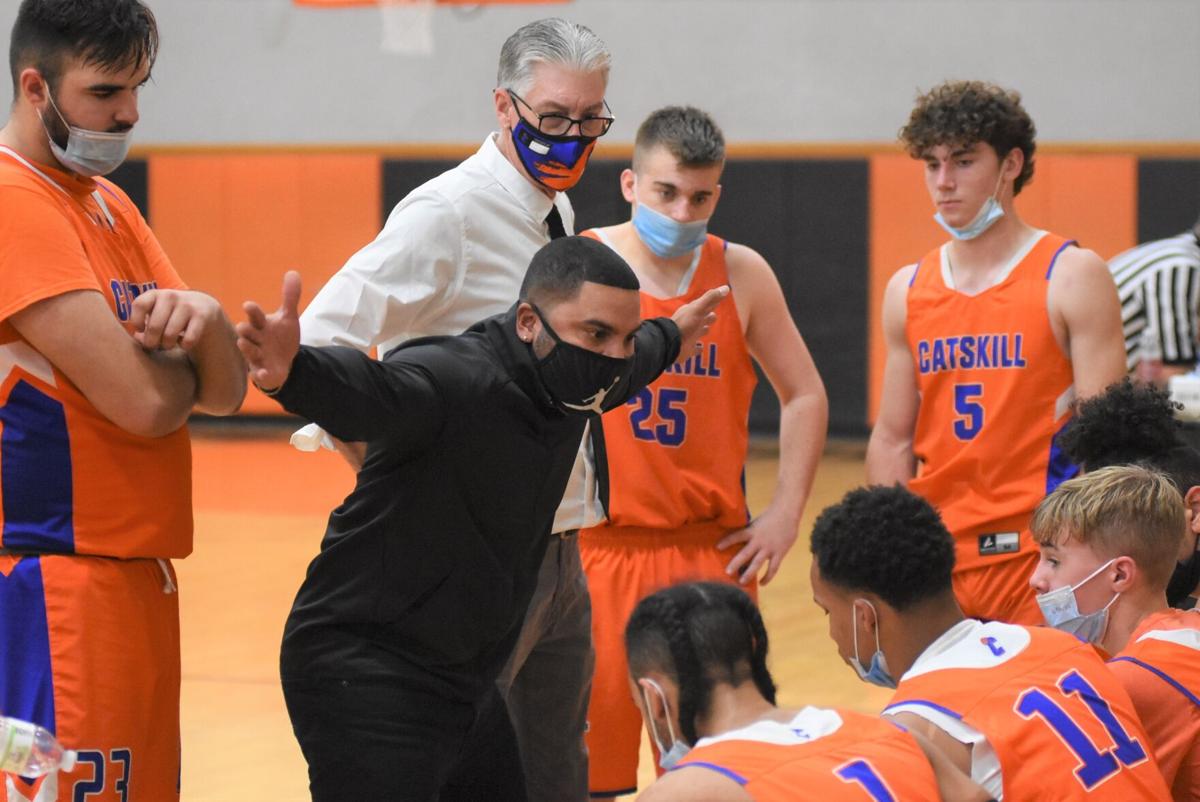 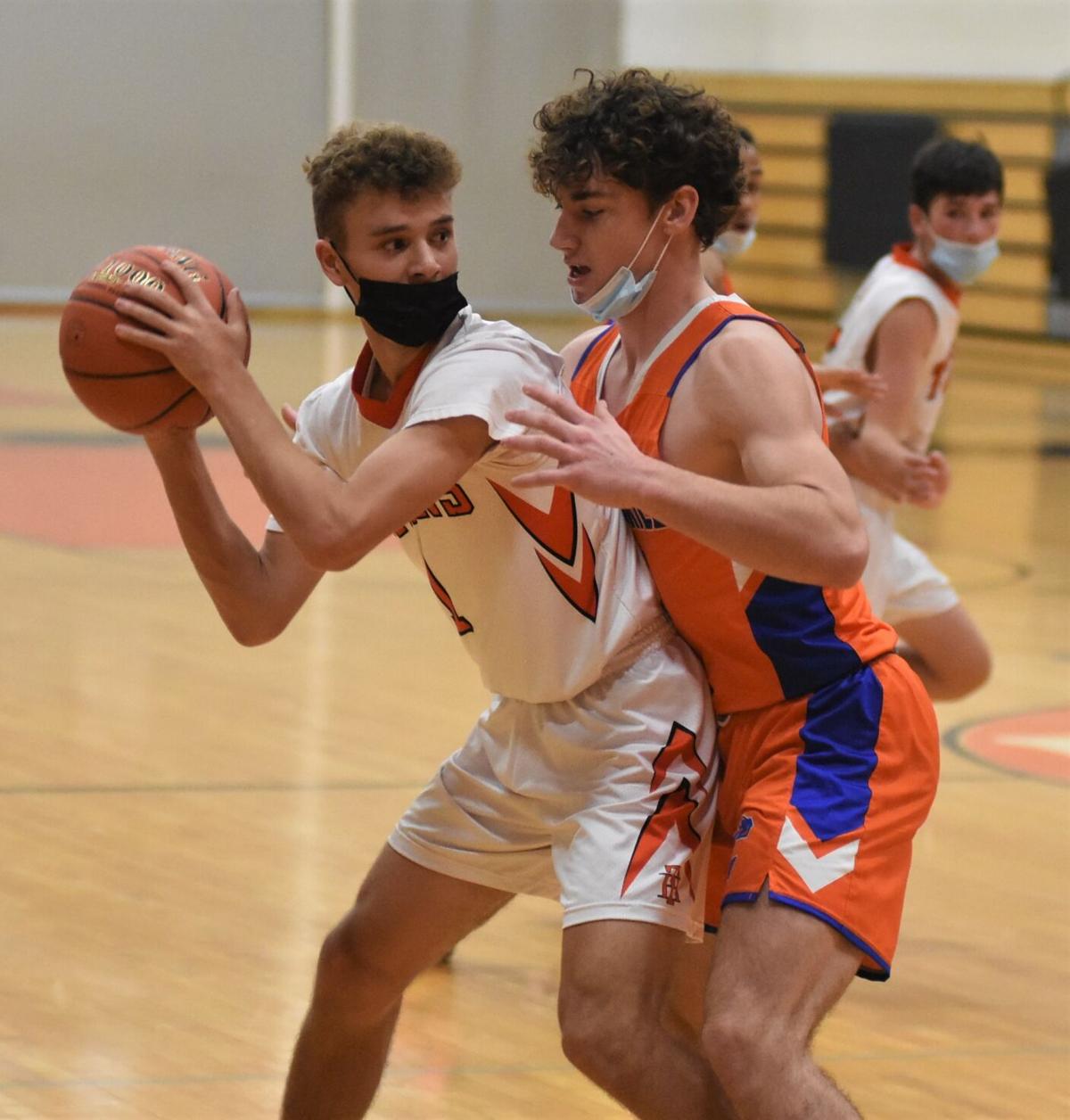 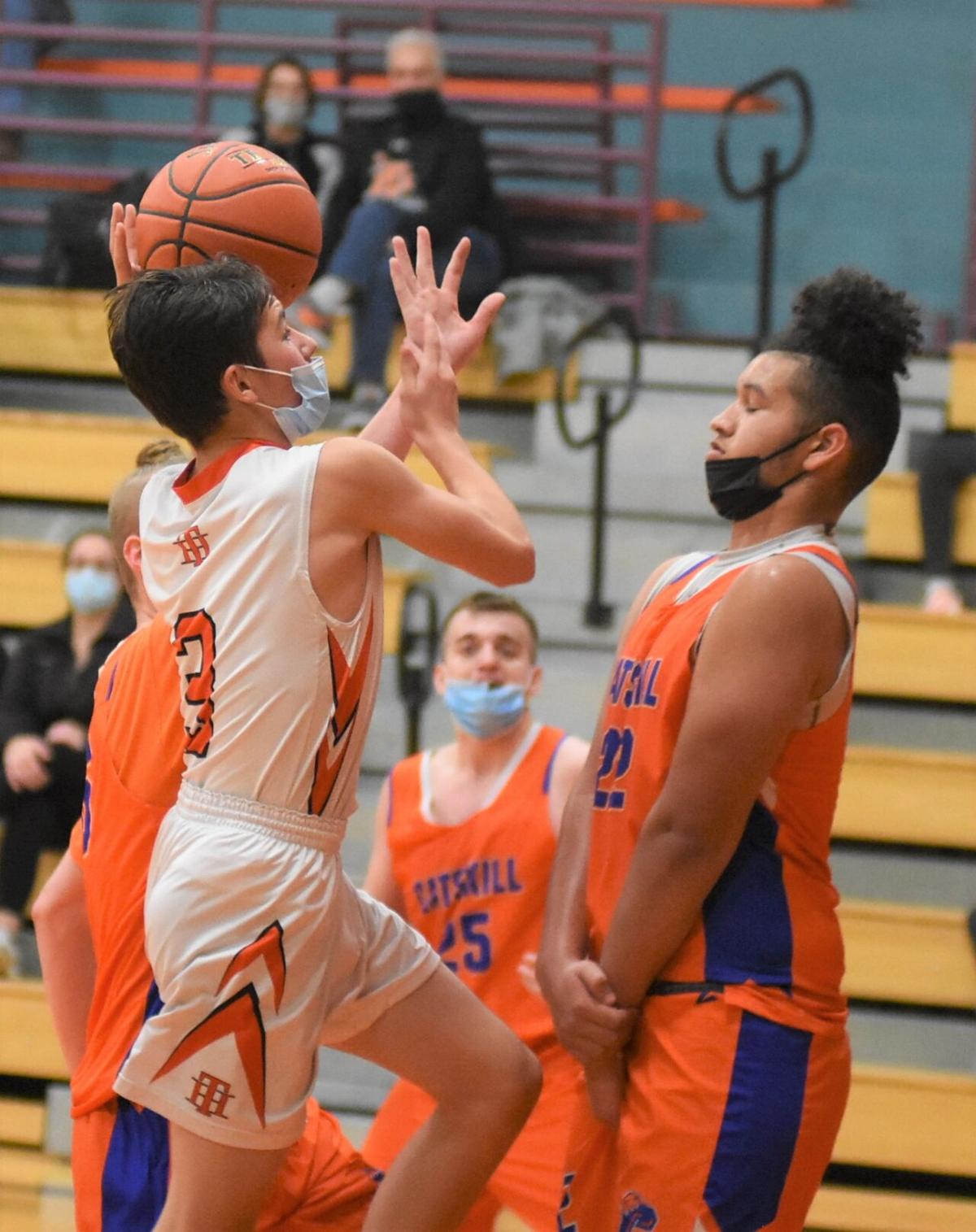 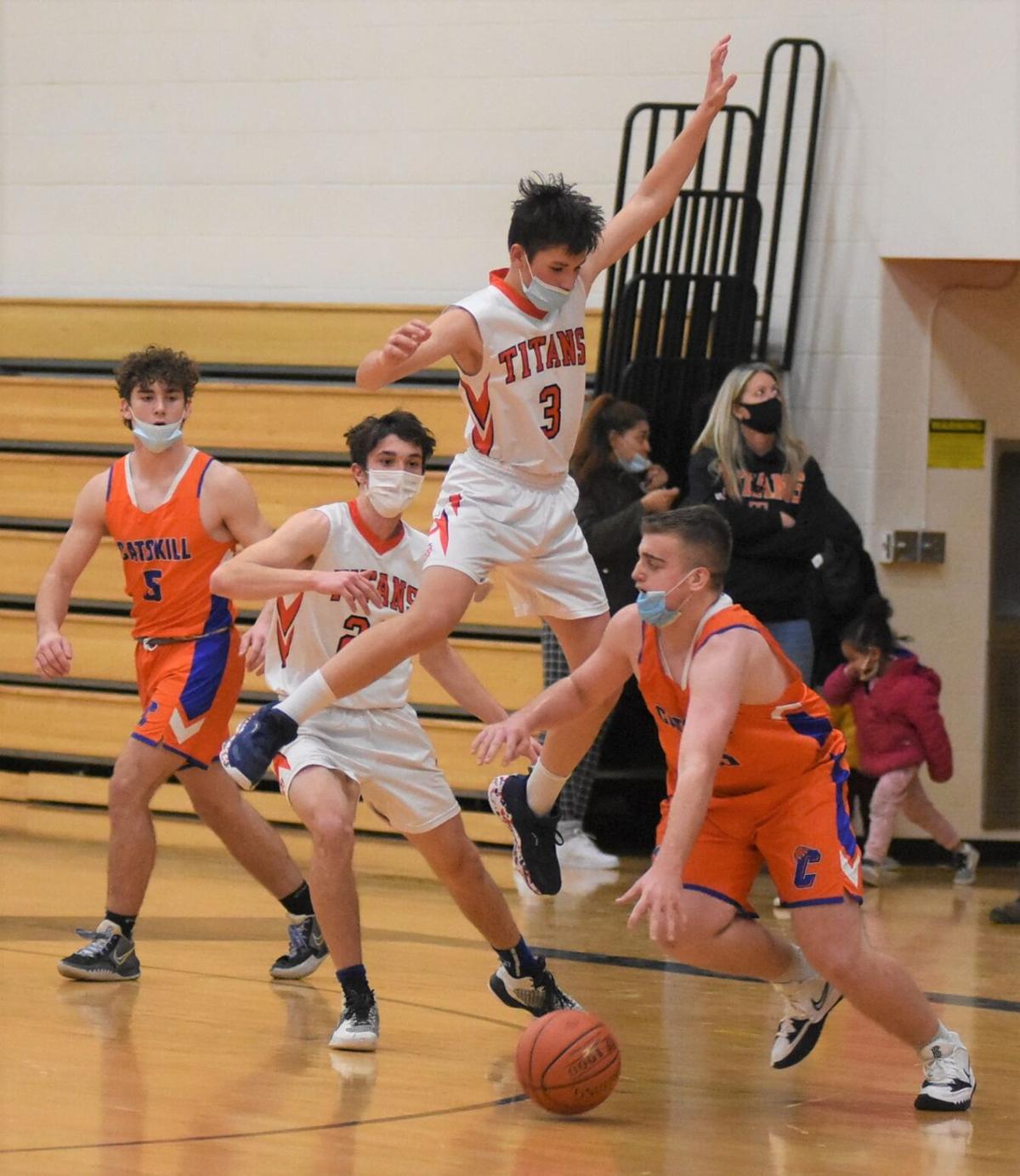 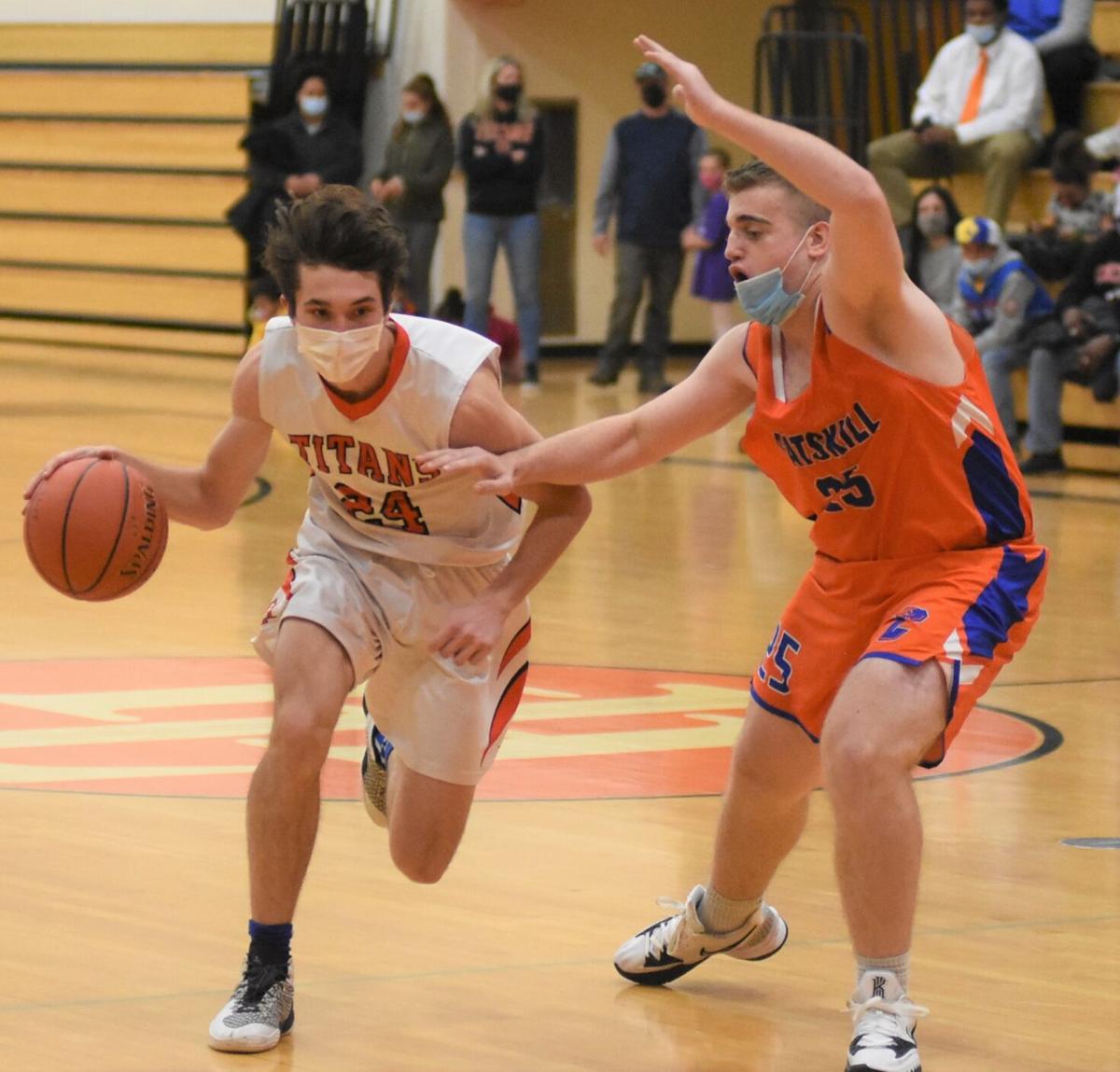 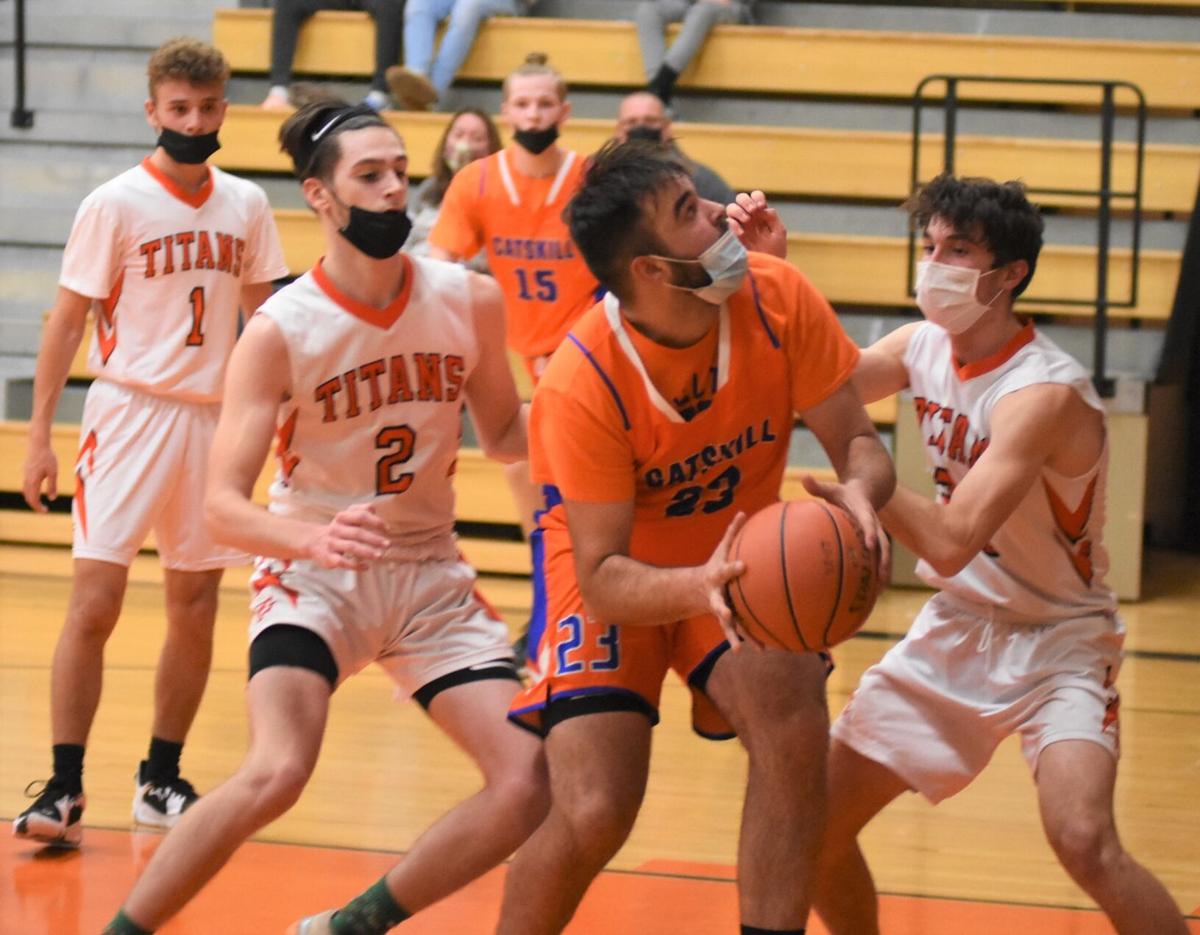 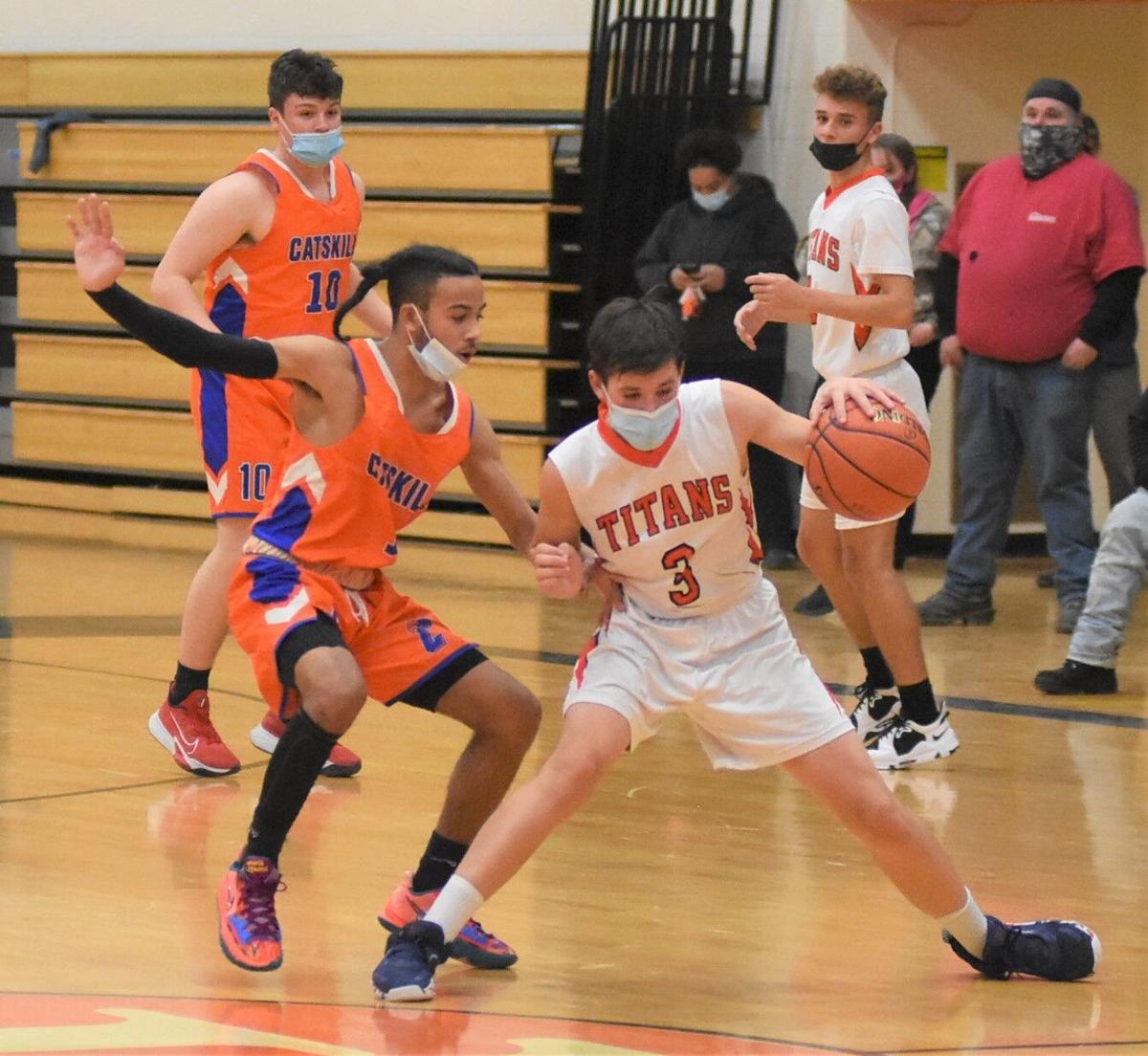 The Cats’ offense was well balanced with Jacob Devlin, Sean Haye, Eddie Rogers, and Lucas Konsul all in double figures. Zach Rowe led the Titans with 15 points off of five three pointers, as teammates Neil Howard and Kobe Van Alstyne added 13 and 14, respectively.

Taconic Hills quickly jumped out to a 5-0 lead in under a minute of game time. However Devlin knocked down a shot from beyond the arc, and hit a layup on an in-bound pass from underneath the basket to tie it 5-5.

Azar Brantley was stripped of the ball, but he raced to the opposite end of the court for a huge chase down block in the paint. The Cats were out-rebounded in the first quarter and bullied in the paint by the Titans. But they hit a three pointer near the end of the period to pull within six points of Taconic Hills, 23-17.

This next quarter was the turning point for Catskill as they flipped the script and threw their size right back at their opponents. The Cats took the lead on a short floater by Haye, and widened it to 28-24 after he hit a three-ball from the corner. The Titans needed a respite and called a timeout with 3:06 on the clock, trailing 32-27.

Van Alstyne leapt to the corner to block another three-point attempt, but Catskill did not let it slow them down. Haye muscled through a double team in the paint on a subsequent possession, making the baby hook shot he fired off. The Cats closed out the first half outscoring the Titans 21-4 in the second quarter, and led 38-27 at the break.

The defense for each side showed up again as they entered the third period. However Taconic Hills did not score a single basket in the first three minutes of the quarter, and Catskill’s lead grew to 44-27.

Brantley stole a Titans pass in the backcourt on an incredibly smart play on defense, and got the easy layup. The Cats’ defense locked down the Titans on one possession so tight they had no room to move and had to call a timeout. Taconic Hills had a chance to shave three points off of the lead at the horn, but the shot from the left wing bounced off the rim.

Catskill entered the fourth quarter leading 54-36, but the Titans stayed aggressive despite the deficit. The Cats bench was livid over a no-call after Sean Haye was slapped on the arm in the painted area. With 5:01 on the clock, the Cats called a timeout to tighten up their ball movement and defense even moreso.

Though up by 17, they got complacent for a few minutes and had just two points in the period so far. The short break did the trick for Catskill and they hit a few shots to get their confidence back for the remainder of the game. Taconic Hills did what it could but the game was out of reach with just a few minutes left in regulation as they found themselves now down by 20.

The Cats did enough to coast the rest of the way and finished through the final whistle to earn the road victory 70-53 over the Taconic Hills Titans.