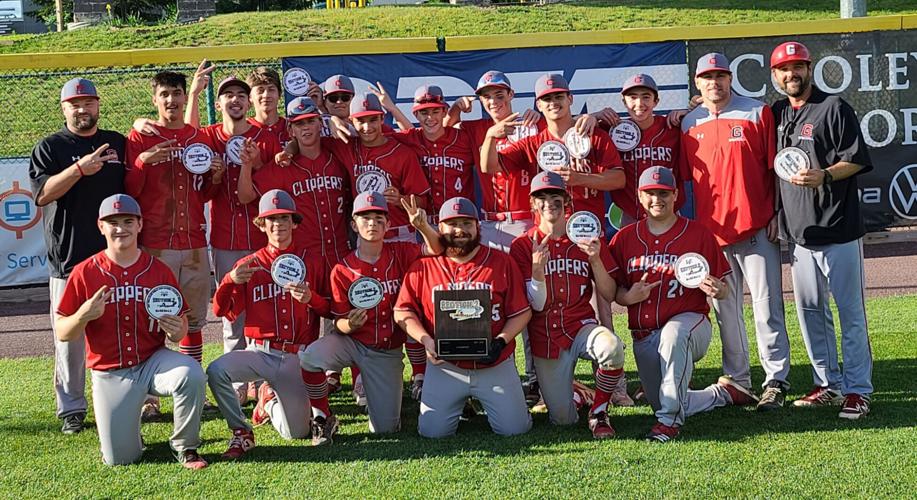 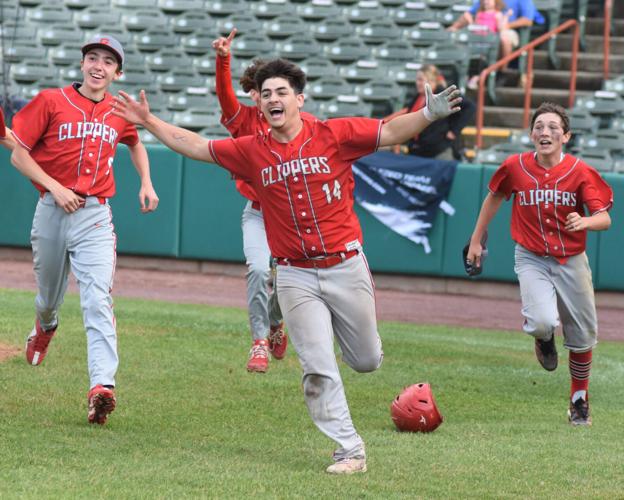 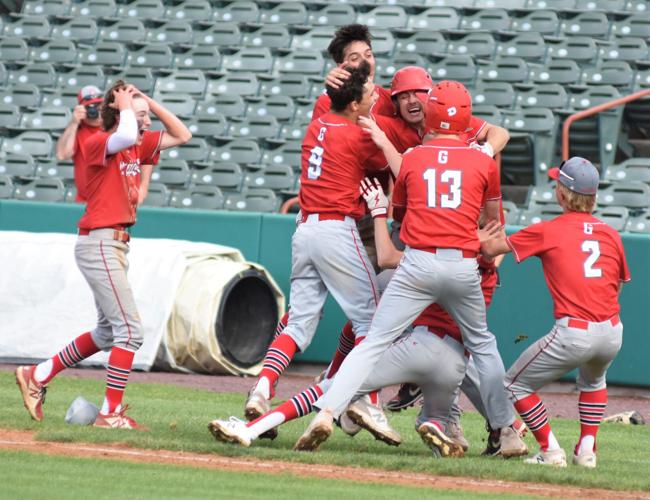 Tim Martin/Columbia-Greene Media Germantown players celebrate at first base after Logan McDonald’s walk-off single in the bottom of the seventh inning gave the Clippers a 2-1 victory over Fort Ann and their second consecutive Section II Class D baseball championship on Saturday at Joe Bruno Stadium in Troy.. 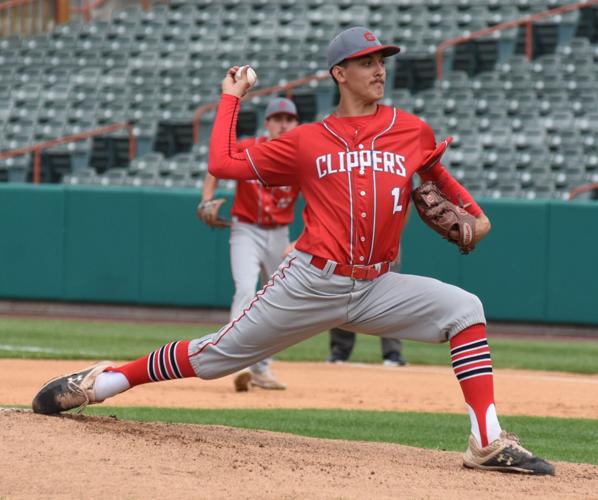 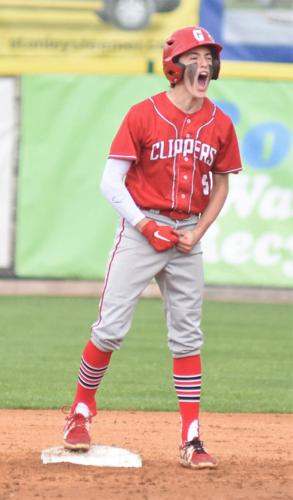 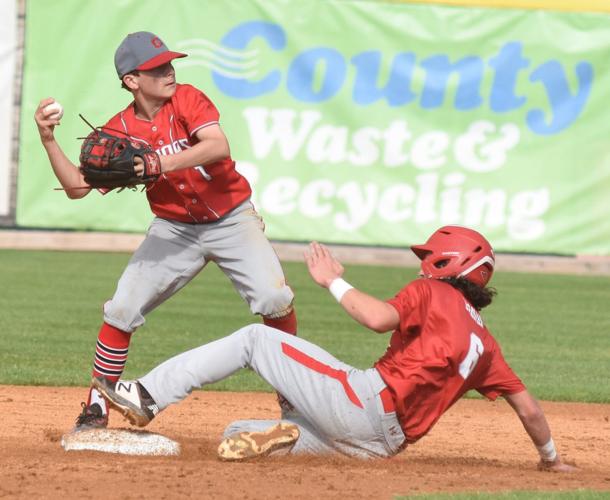 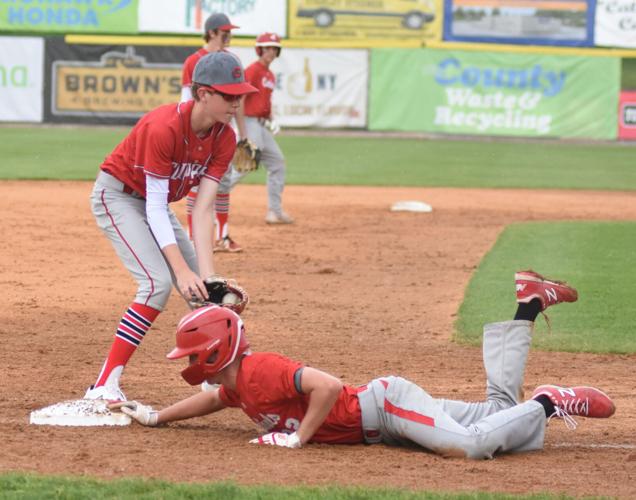 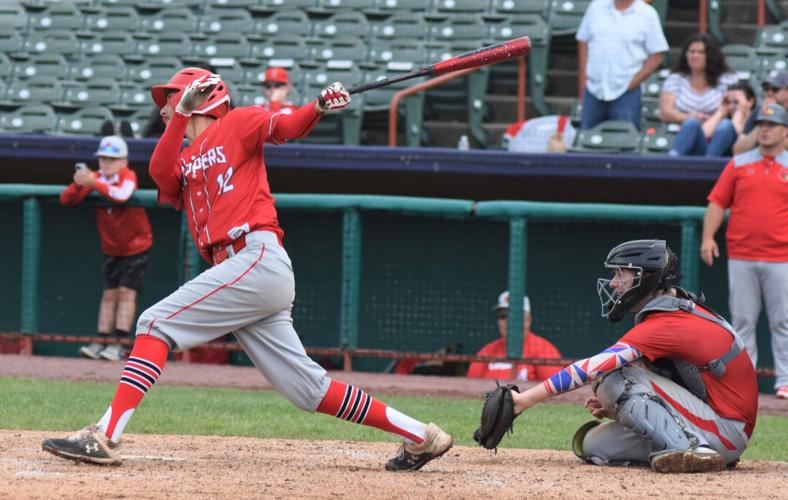 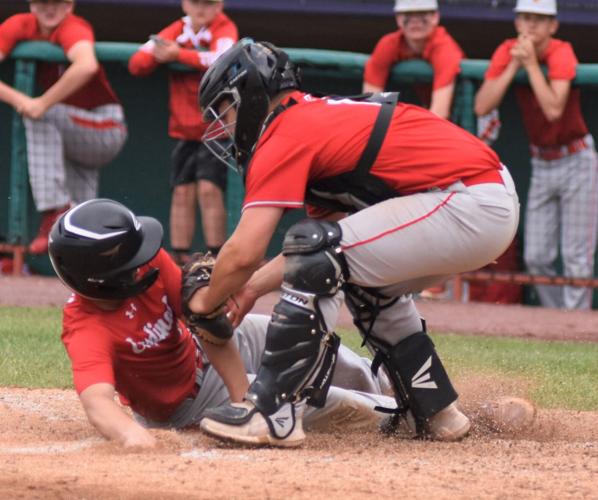 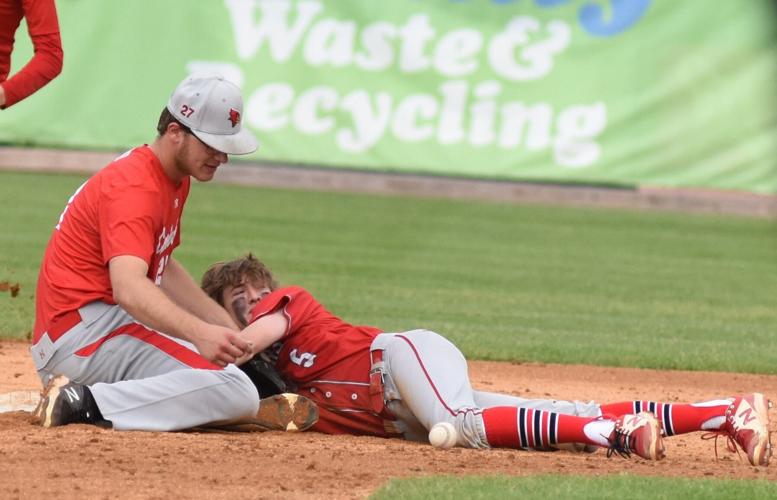 Tim Martin/Columbia-Greene Media Germantown players celebrate at first base after Logan McDonald’s walk-off single in the bottom of the seventh inning gave the Clippers a 2-1 victory over Fort Ann and their second consecutive Section II Class D baseball championship on Saturday at Joe Bruno Stadium in Troy..

TROY — One thing has been proven during the course of the high school baseball season — you can never count the Germantown Clippers out of any game.

Trailing 1-0 from the first inning on in Saturday’s Section II Class D championship game against Fort Ann, Germantown rallied for two runs in the bottom of the seventh inning, capped off by Logan McDonald’s RBI single, to earn a 2-1 victory and its second consecutive Section II title.

The Clippers (12-5) move on to state regional play and will play Section IX champion Chapel Field on Saturday at noon at Saratoga Rec.

The first six innings of Saturday’s championship game at Joe Bruno Stadium were especially frustrating for Germantown batter, who consistently made contact, but could manage just one hit off of Fort An pitcher Callon Sutliff.

“We couldn’t find it,” Germantown coach Brett Holmes said. “All game long I kept saying ‘boys, keep hitting, keep hitting, we’re going to find grass.’ It was like we couldn’t buy a hit, but I knew these guys would keep fighting and they’ve been doing it all year. I had faith in them and I knew they’d come through. I wouldn’t think it would come in the seventh inning, down 1-0 with a man on second base, but we figured out how to get it done and that’s what good teams do.

“It’s amazing, and to beat the Class D record in sectional championships and the state record in Class D championships, we have so much respect for them, we really do, but it makes it that much sweeter for us. I’m proud of these boys.”

Through the first six innings, Owen Watson’s one-out double was the only hit Germantown could muster. But down to their last three outs, the Clippers rallied. Watson got things started when he reached first base on a dropped third strike and stole second base. Jonathan Mollo followed with a triple to right field, scoring Watson with the tying run. That set the stage for McDonald, who drilled a 1-1 offering from Sutliff to left field, plating Mollo with the winning run.

“It’s 1-0, bottom of the seventh, I saw that hanging curve ball, I was so excited, I pull it and I knew Mollo was coming in,” McDonald said. “Mollo’s my boy.”

“Unbelievable,” Holmes said. “These guys are fighters. They show up every game ready to fight, sometimes it’s amongst themselves when it’s not going our way, but we’ve learned how to turn that around and pick each other back up and we’re a very dangerous team when we fight like that.”

McDonald couldn’t be happier that the Clippers get to play another day.

“I’m ecstatic,” McDonald said. “For my last year as a senior I’m really happy we could pull this off, especially in such a tough game like that against a very good team. We knew that it was going to be a tough game coming into this and we did what we had to do. We might have done it late in the game, but we got it done.

“We’re fighters. We’ll pull it out in the last minute if we have to. We come out a little late, but we got our bats rolling by the end of the game.”

Fort Ann had several chances throughout the game to add to its lead, but each time, Mollo and Ferrer settled down and pitched their way out of the jam.

A key moment came in the top of the seventh when Fort Ann threatened to blow the game open, loading the bases with one out. Ferrer dug deep, though, and struck out Ryan Blondin, then got the ball quickly to his catcher McDonald, who tagged out Dylan Brown attempting to steal home to end the inning.

“Both of them, bear down when we need to get it done,” Holmes said of Mollo and Ferrer. “Honestly, I don’t believe either one of them had their best game, a couple of guys would get on, but then they’d bear down and get it done. That’s what great pitchers do.”

“We practice every day after school and we’re going to try as hard as we can to really go as far as we can,” McDonald said.

“We’re going to show up and we’ll be ready, as always,” Holmes said.”