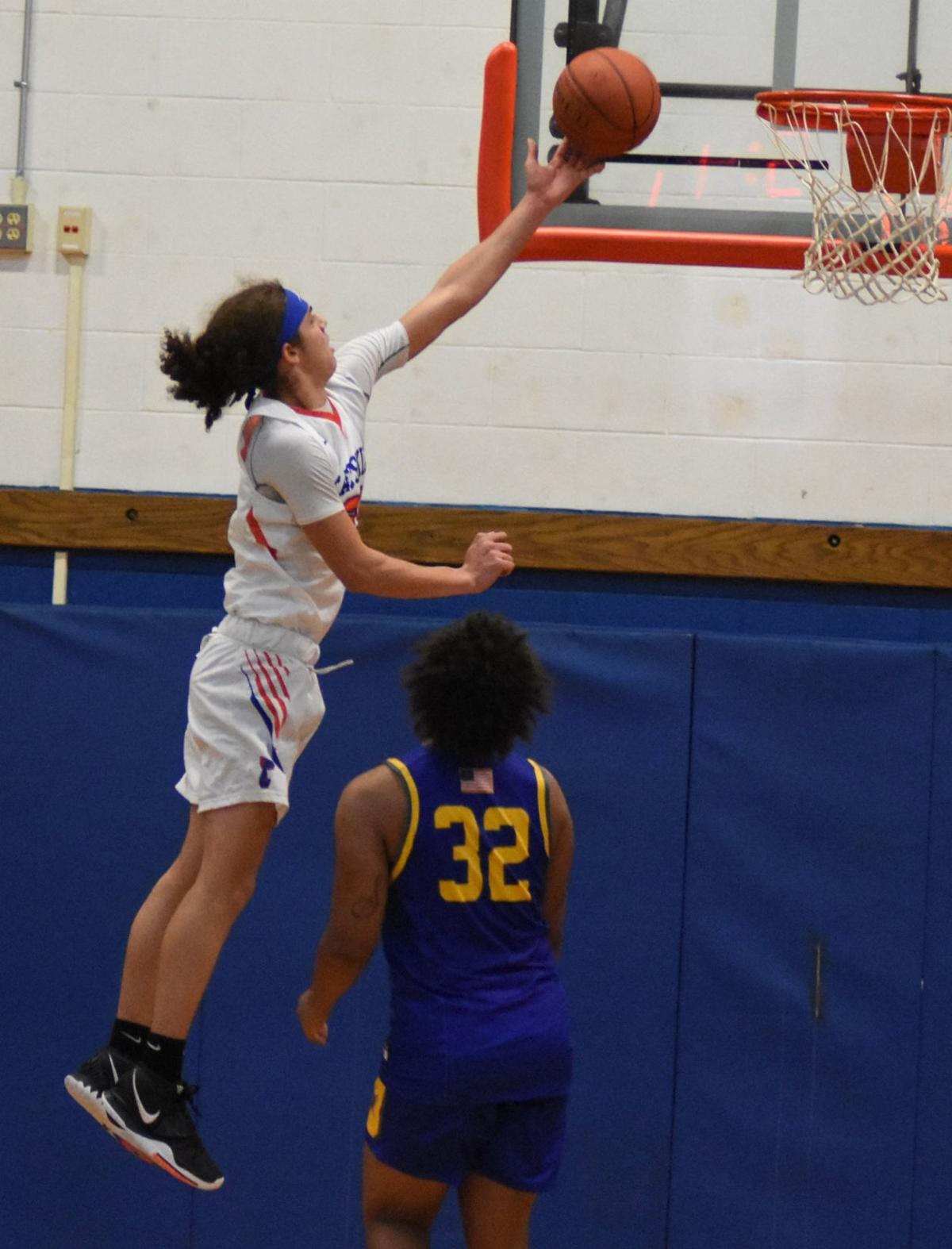 Tim Martin/Columbia-Greene MediaCatskill’s Lavon Fernandez (23) drives to the basket during a recent game against Hudson. 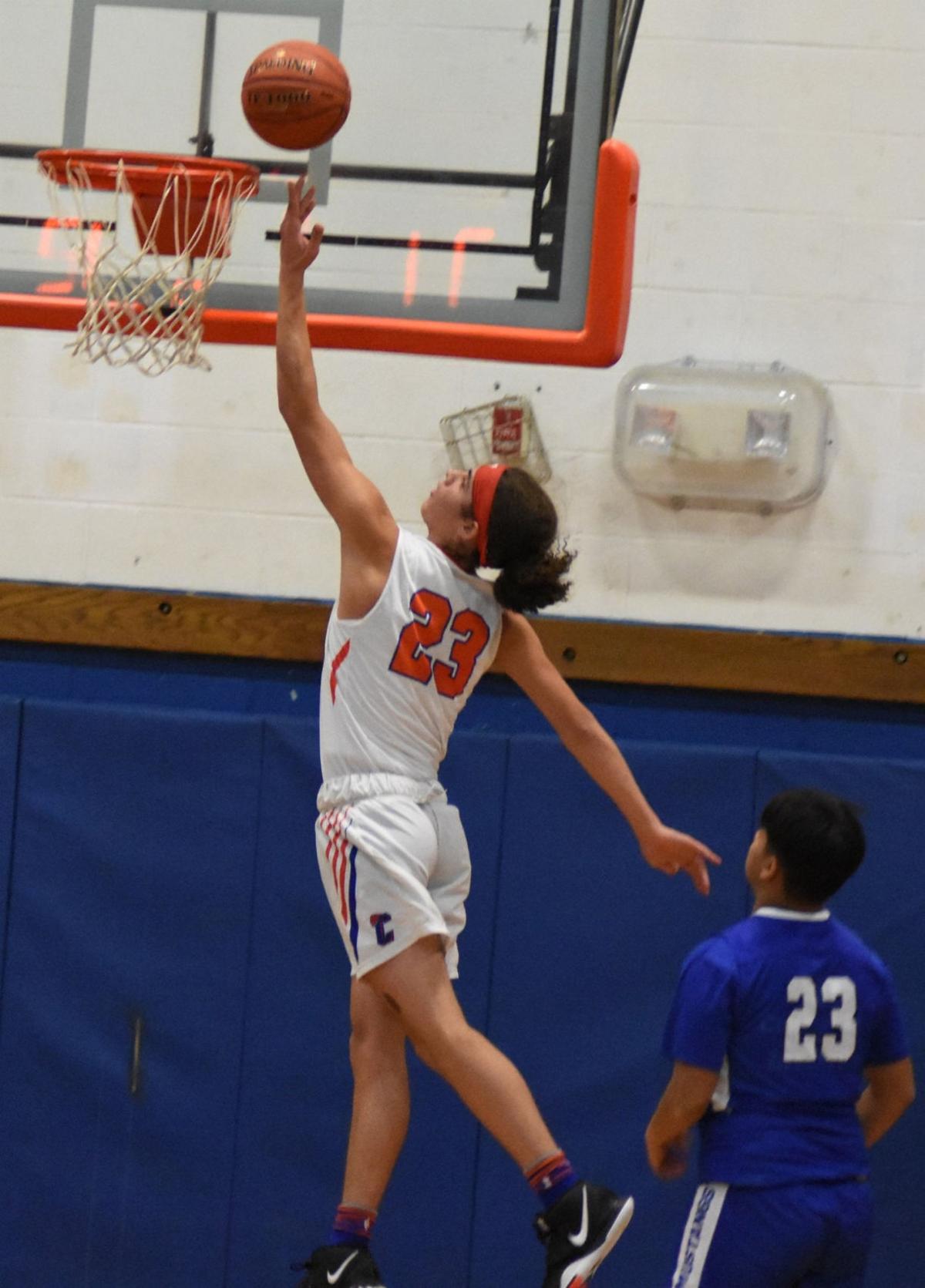 Tim Martin/Columbia-Greene MediaCatskill’s Lavon Fernandez (23) puts up a shot during a recent game against Cairo-Durham, 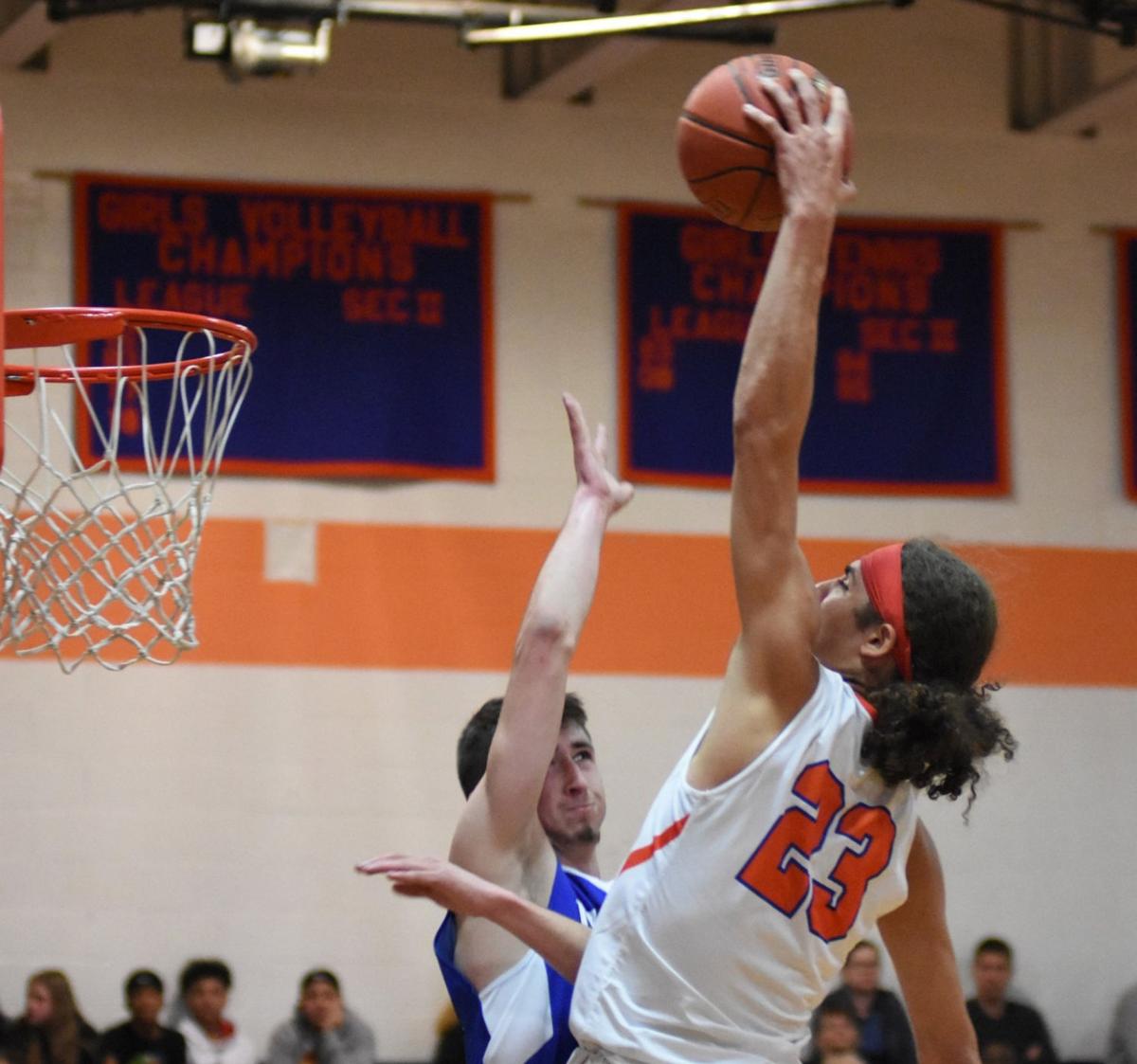 Tim Martin/Columbia-Greene MediaCatskill’s Lavon Fernandez goes to the basket during a recent game against Cairo-Durham. 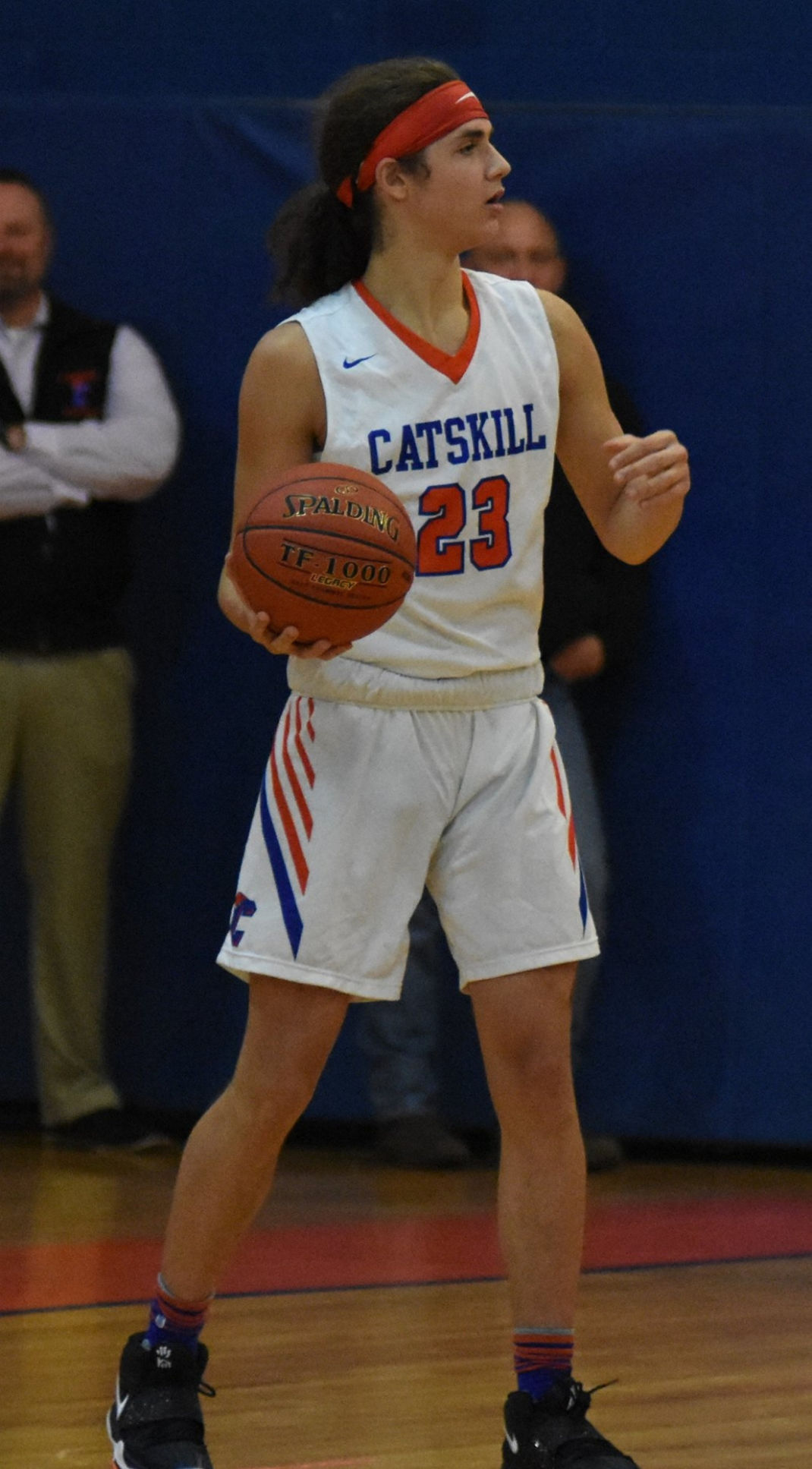 Tim Martin/Columbia-Greene MediaCatskill’s Lavon Fernandez (23) drives to the basket during a recent game against Hudson.

Tim Martin/Columbia-Greene MediaCatskill’s Lavon Fernandez (23) puts up a shot during a recent game against Cairo-Durham,

Tim Martin/Columbia-Greene MediaCatskill’s Lavon Fernandez goes to the basket during a recent game against Cairo-Durham.

CATSKILL — Catskill’s Lavon Fernandez became the latest member of the 1,000-point club on Tuesday when he hit a driving layup with 2:48 remaining in the first quarter of the Cats’ game against Coxsackie-Athens.

More than 700 of those points came when Fernandez played for Hudson in his sophomore and junior years, with the rest coming this year with Catskill.

Columbia-Greene Media caught up with Fernandez at a recent practice to discuss a number of topics, including his transfer from Hudson to Catskill and his plans after high school.

Q: Coming up through the ranks in Hudson, did you ever think you’d score 1,000 points by the end of your high school career?

LF: I’m happy I could score 1,000, but I couldn’t do it without my teammates passing me the ball. After scoring 196 points my sophomore year and barely playing I thought it would never be able to happen. But after my junior year in Hudson when I scored like 600 points I knew it was possible.

Q: You made tremendous strides from your sophomore year to your junior year. How did you accomplish that?

LF: My sophomore year, my role really wasn’t to score. My role was to come in, score a few buckets and come right out. Basically, to give the starters a breather. Then my junior year, I though I might average 15-17 points, but after the first game against Maple Hill where I scored 32 points after I only had seven at the half, I was like, yeah, this is going to be our year. I don’t really like to follow the stats because you can get distracted, but I’d look and see that at one point I was second in scoring (in Section II), then I was third and I finished fifth. I didn’t really expect it. It was crazy.

Q: You averaged 27 points per game your junior year at Hudson, but the team lost five Patroon games, which is more than the previous 3 years combined. Were you surprised at how the season unfolded?

LF: It was tough because I thought I was the best player on the team and all the blame was coming on me. We played Coxsackie-Athens and lost to them and we came into the game like we had already won. Those Patroon games that we lost, we came in like we had already won. We had no energy and every game was like the other team’s Super Bowl, so they basically came in already up 10 points.

Q: What led to your transfer from Hudson to Catskill? Was it a hard decision?

LF: It wasn’t really a hard decision, but I did it for my education. I would love to play for Hudson my senior year and break the school record, that’s something I really wanted to do, but I had to put my education first. I can’t go to college on my education. I’m not going to lie, my grades were 70s, but now I’m on the high honor roll. That’s what I always tell people. I didn’t really come here to hoop. Of course, I’m going to play when the season comes around, but I really want to focus on my education so I can get into college and get a degree.

Q: How has the transition been coming to a new school?

LF: It really wasn’t that hard because Catskill and Hudson are so close that I know everybody. It was kind of weird at first. I came to Catskill in March, so by the time of our first game came I had already played four spring games, 12 games in summer league, and then fall ball I probably played 10 games, so I was used to it. It wasn’t that hard.

Q: How do you like playing with your new teammates?

LF: I like it because everybody wants to win. Everybody comes to practice to get better and it’s straight serious when we’re in the gym.

Q: Has it been difficult adjusting to a new set of coaches?

LF: I like all the coaches. They want you to get better. When we actually get to the gym, they will go out of their way to unlock the gym and let us shoot. Coach Lampman, leading up to the season, we did 6 a.m. workouts, the week before tryouts we did a bootcamp in the cold. It wasn’t mandatory, but we’d run the track. So they just want us to get better.

Q: Your transfer to Catskill caught a lot of people by surprise. What would you say to the Hudson fans that have watched you coming up?

Q: How do you feel you stack up against the best players in Section II?

Q: You’ve developed into a dunking machine over the years. Do you keep track of how many you have?

LF: I had a goal set that I would catch a dunk every single game, but I have enough dunks to average a dunk per game. My teammates ask me how I dunk so easy and I tell them this is my mindset — I go up like a boss, I don’t go up like an employee.

Q: What part of your game do you think needs the most improvement?

LF: My on-ball defense, that’s for sure. I want to be an ultimate lockdown defender, that’s what my goal is. Also, my outside shooting. I feel like I can shoot. A lot of people don’t think I can shoot, but I don’t have confidence. I have to build confidence in my shot.

Q: Catskill has just one loss so far, but it was a big loss to a very good Mekeel Christian team. What did you learn about your team from that loss?

LF: I learned we have to wake up as a team. Before the game, we were goofing around a little too much. Most of the time we’re serious, but we have to come into every game like we’re serious. It was all over Facebook, Mekeel vs. Catskill, so now we come in and get blown out and it looks bad on us. So now we have to work extra hard.

Q: Catskill is unbeaten in the league and ranked in the top 20 in the state, how good can this team be?

LF: I think our team, at this moment, we’re playing maybe 60% out of 100%. We’re nowhere near as good as we want to be, but I feel like we can win the whole section and make a run at states. We could be one of the best teams in the area. Not to make any excuses for the Mekeel game, but we come in playing teams from the Patroon and Mekeel is playing good teams every single game. So when we come in, they were already ready for us, but we weren’t ready for them.

Q: What about your future. You have talked about playing at the next level, any idea where that may be?

LF: After high school I want to go right to a prep school. I have a few prep schools I’m looking at. There’s one in Maine, one in Connecticut. I’m definitely going to a prep school so I can get more developed and I don’t want to waste a year of college. My ultimate goal is to transfer to a D-1 college. I already have some D-1 looks. I want to come into college being the best player I can be and that’s why I want to go to a prep school, so I can get better, stronger, faster, play better defense and just work on everything so that when I go to college, I’ll be ready to go.