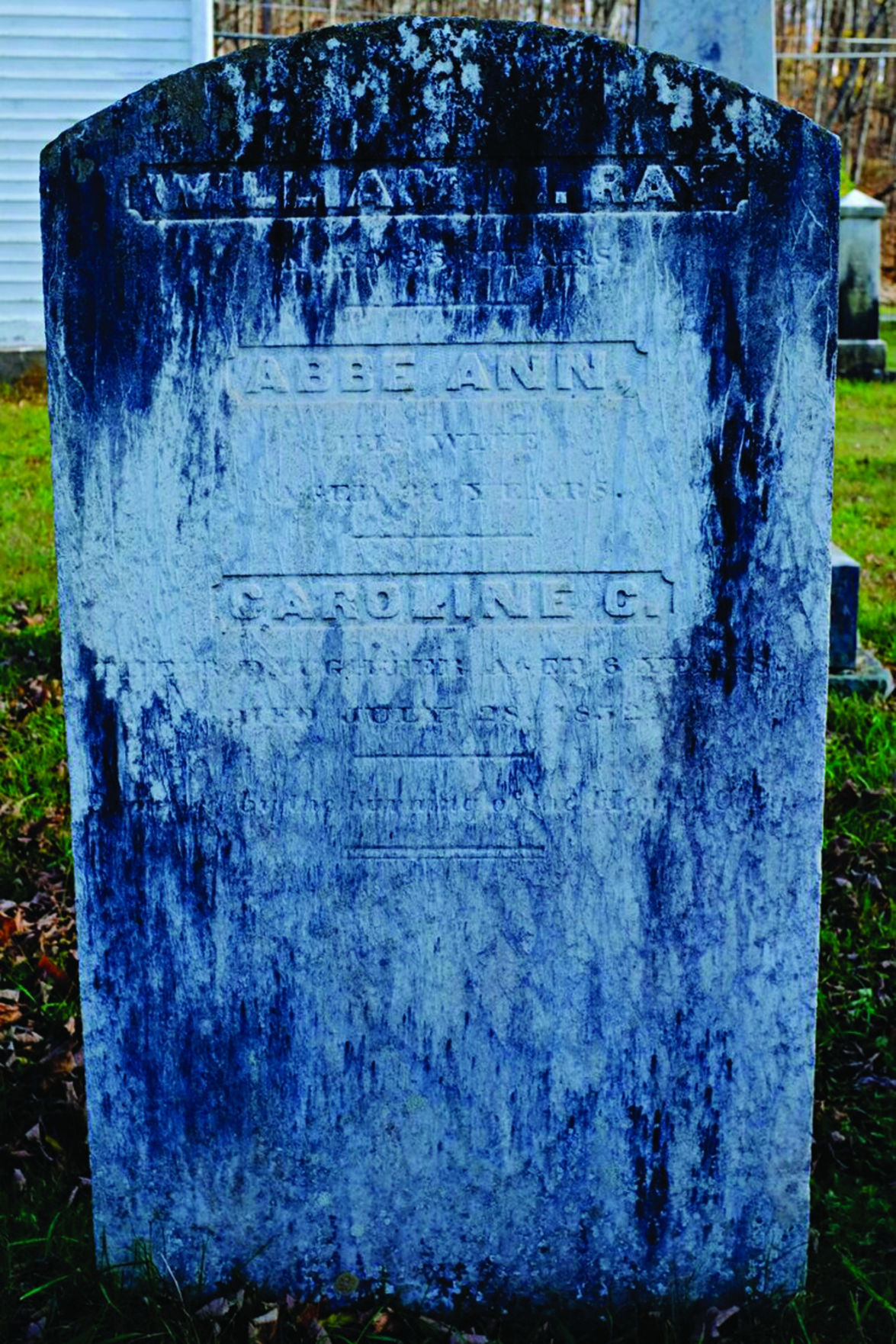 Courtesy of the Greene County Historical Society’s Vedder Research Library.Gravestone of William Ray, his wife Abee Ann and their daughter Caroline in the Oak Hill Cemetery. 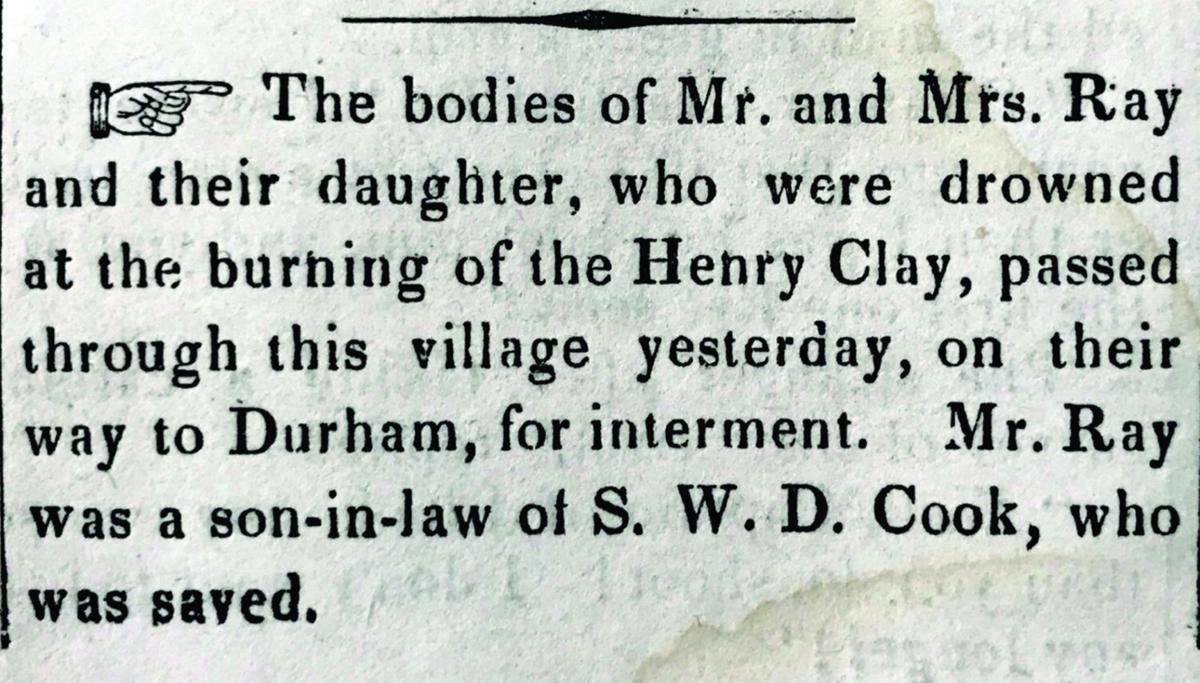 Courtesy of the Greene County Historical Society’s Vedder Research Library.Gravestone of William Ray, his wife Abee Ann and their daughter Caroline in the Oak Hill Cemetery.

This week I am pleased to present Part I of a two part guest column by Jonathan Palmer about the burning of the steamship Henry Clay and a family from Oak Hill that perished as a result. Jonathan Palmer is the capable archivist at the Vedder Research Library in Coxsackie and Deputy Greene County Historian. Part II will appear next week.

Burning of the Henry Clay, Part I

The invention of the steam engine was an achievement equal to breaking the sound barrier and the creation of the internet; tangible proof that the power of the mind could be applied to cross the threshold of physical barriers once thought absolute and insurmountable.

If the invention of the steam engine was equivalent to breaking the sound barrier, then the marriage of steam engines and wooden ships was something akin to the initial development of supersonic jets — the learning curve was immense and the end results were often imperfect. For millennia sailors had utilized the wind, tide, and brute strength to conquer the vastness of the sea and the power of Earth’s greatest rivers. The steamboat subverted this ancient and venerable tradition virtually overnight. These vessels dispensed with sails in lieu of mechanical contrivances and relied on fire (once the sailor’s great foe) to spurn the wind which had so reliably borne humanity to unknown reaches for generations. It is no wonder so many doubted and feared the steamboat upon its introduction, and less shocking still that the fears of many would prove well founded as steamships grew in popularity and number during the Antebellum period.

The earliest days of steam transportation on the Hudson River are recorded in graveyards. From New York to Waterford crumbling tombstones give mute testament to an industry fatally plagued by greed and hubris whose only victims were the innocent. Expedience rather than prudence governed the operation of these vessels, resulting in a steady stream of accidents that were so frequent as to almost appear comical in retrospect. Shipping companies competed neck-in-neck billing their steamboats as safer than others, while some deigned to tow their most prudent passengers in comfortable “safety barges” ostensibly beyond the range of the steamboat’s boilers in the likely advent of a mishap. Undetectable manufacturing defects in machinery, poor business practices, and the fundamental design of the ships themselves were bad enough, but all this was compounded by the desire of captains to lay claim to the title of “fastest” on the river.

Steamboat races are a subject which has been dealt with in numerous articles. The grand summary is that these races were categorically a bad idea and often downright dangerous. Captains would push their machines literally to the melting point causing timbers to buckle and boilers to fail - sometimes catastrophically. This carnage was perpetuated in the name of vanity, though some legendary captains refused invitations to race in the name of their passengers’ safety. Such was not the case when Captains Isaac Smith and John Tallman agreed to a competition between the Henry Clay and Armenia on July 28, 1852.

“The Bodies of Mr. and Mrs. Ray and their Daughter, who were drowned at the burning of the Henry Clay, passed through this village yesterday, on their way to Durham, for internment. Mr. Ray was a son-in-law of S. W. D. Cook, who was saved.”

The churchyard of St. Paul’s Lutheran Church in Oak Hill, Town of Durham, is a place out of time. Harkening to the holy grounds of New England’s old houses of worship, gravestones here creep right to the back walls of the Church edifice. The humble aspect of the building itself belies the prominence and affluence of the community it originally served; a fact enshrined in the stately marble stones of the hallowed dead and perhaps more so in the grand homes of the neighborhood around the Church itself. Behind St. Paul’s lie lawyers, industrialists, financiers, gentleman farmers, and business owners who rode the crest of a transformative wave of industrialization in the years prior to the Civil War. These people were masters of change who embraced the most exciting and new opportunities the young republic had to offer - in a sense becoming pioneers of the Nation’s industrial frontier and harbingers of the era to come.

Part two of this column will appear next week.

Reach columnist David Dorpfeld at gchistorian@gmail.com or visit him on Facebook at “Greene County Historian.”

How to find the best tires for winter driving

4 simple steps to reduce the cost of diabetes medications