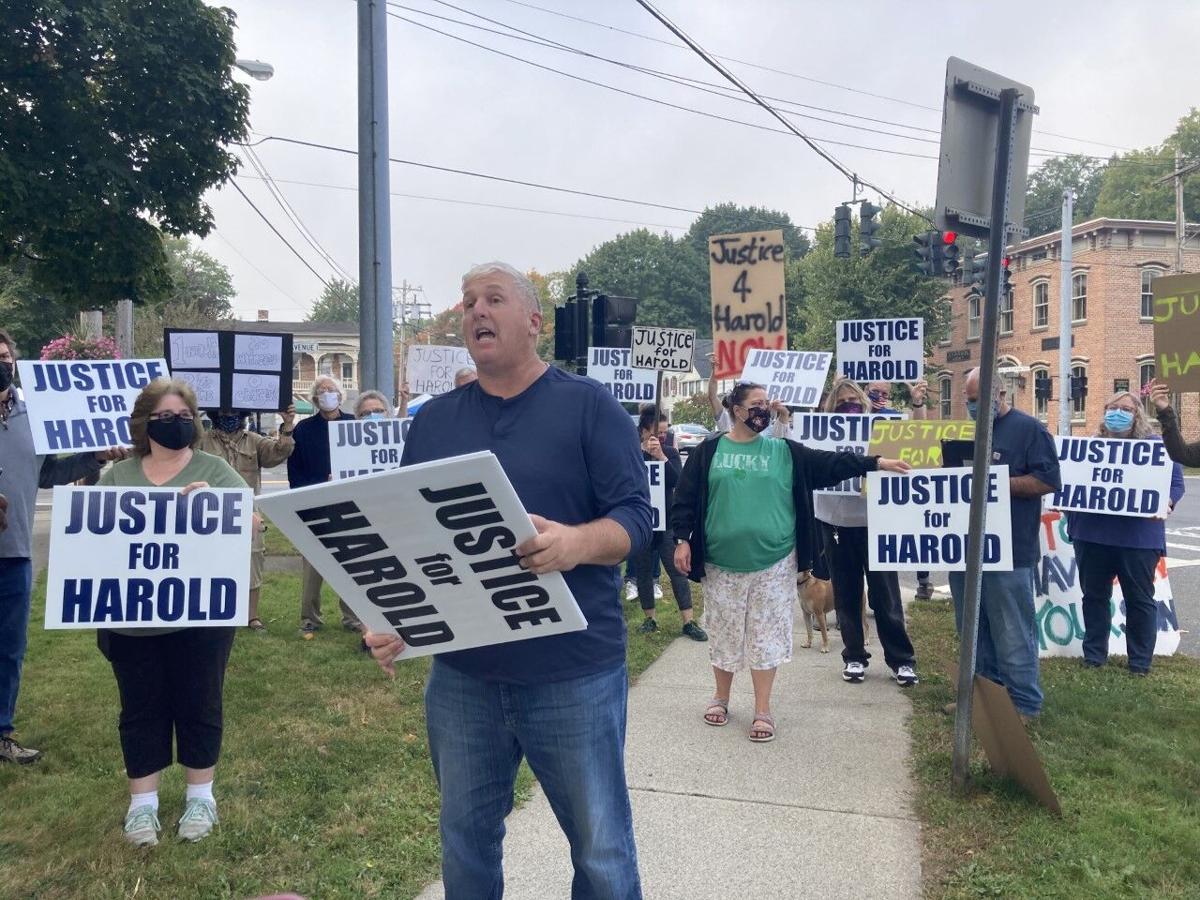 Harold Handy speaks about his son at a Justice For Harold rally Saturday in Kinderhook. 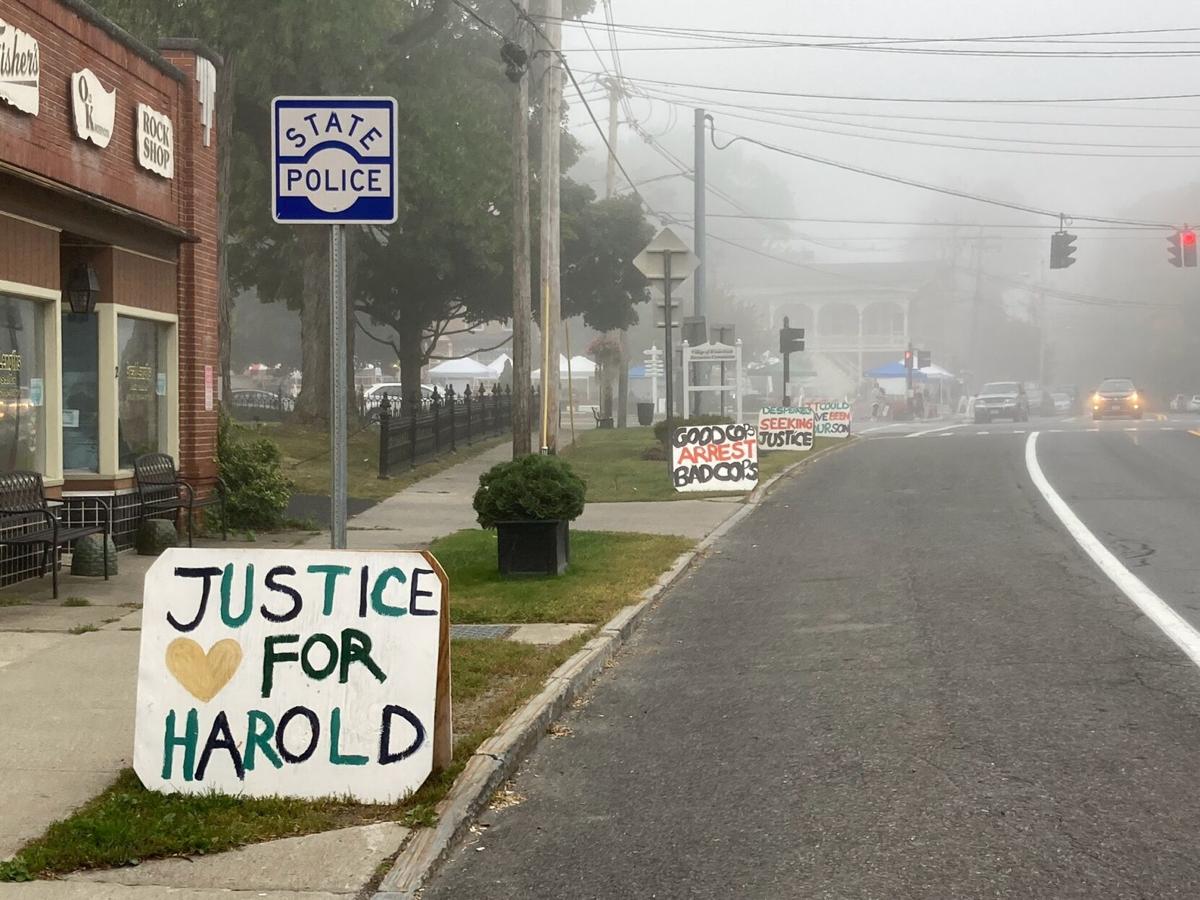 Signs put up just before the Justice for Harold Rally kicked off Saturday in Kinderhook. 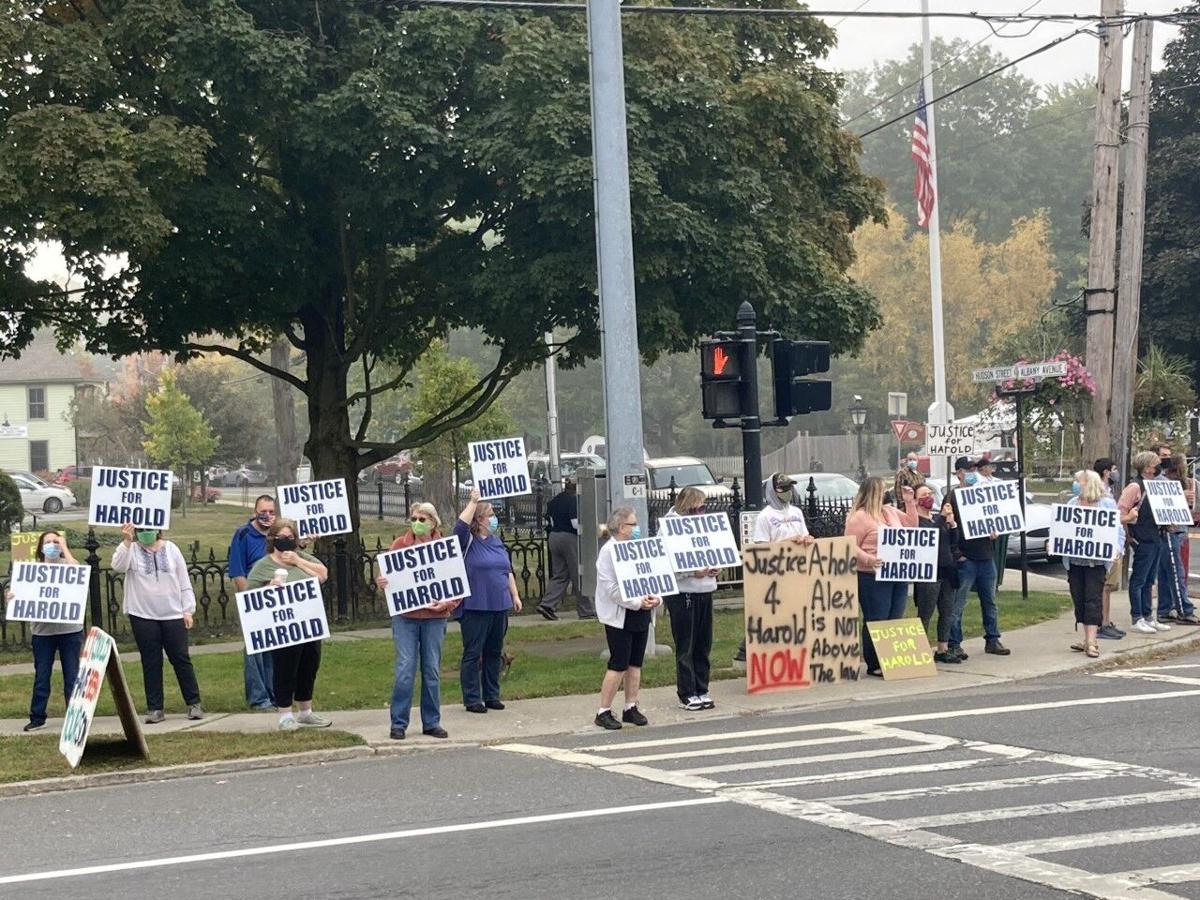 About 30 people attended Saturday's rally in support of Harold Handy on Saturday in Kinderhook. 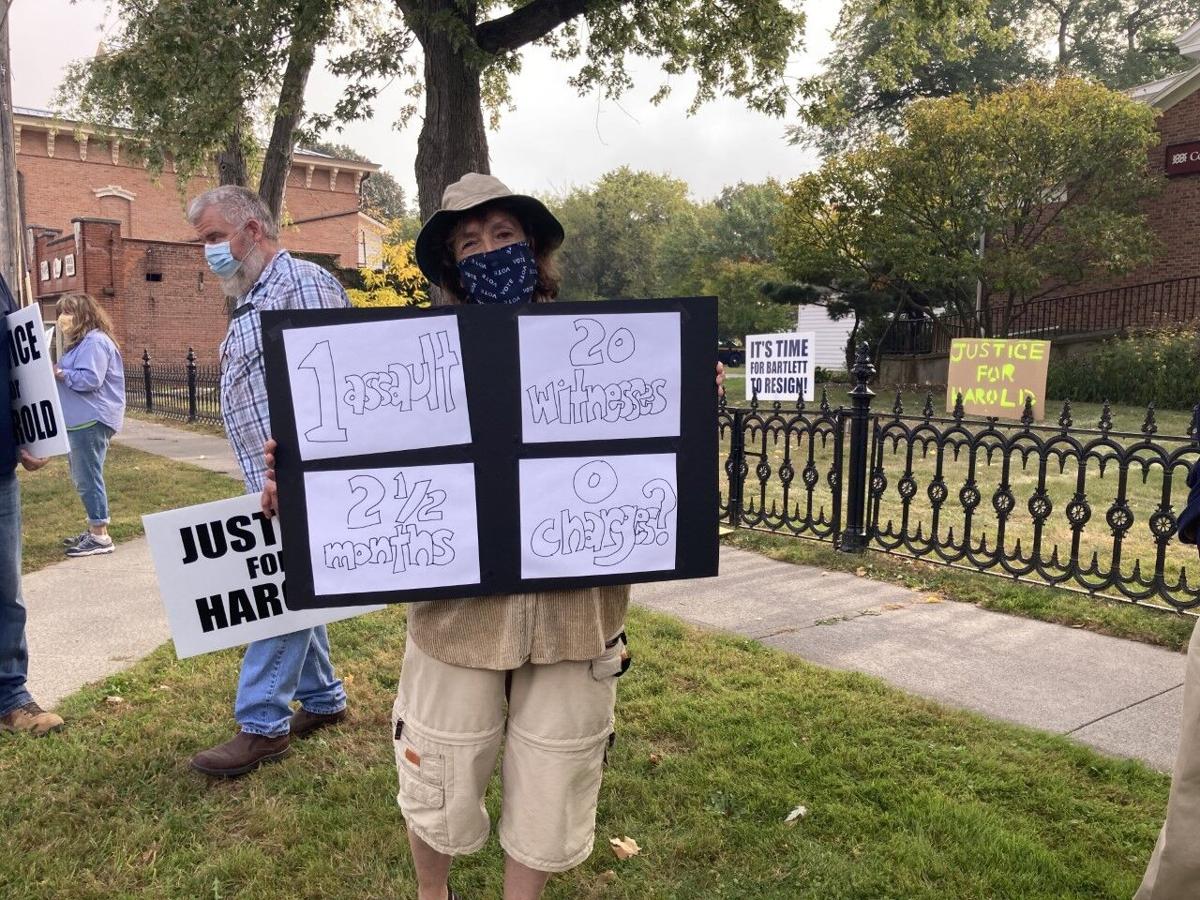 Lee Jamison holds up a sign she made in support of Harold Handy on Saturday in Kinderhook. 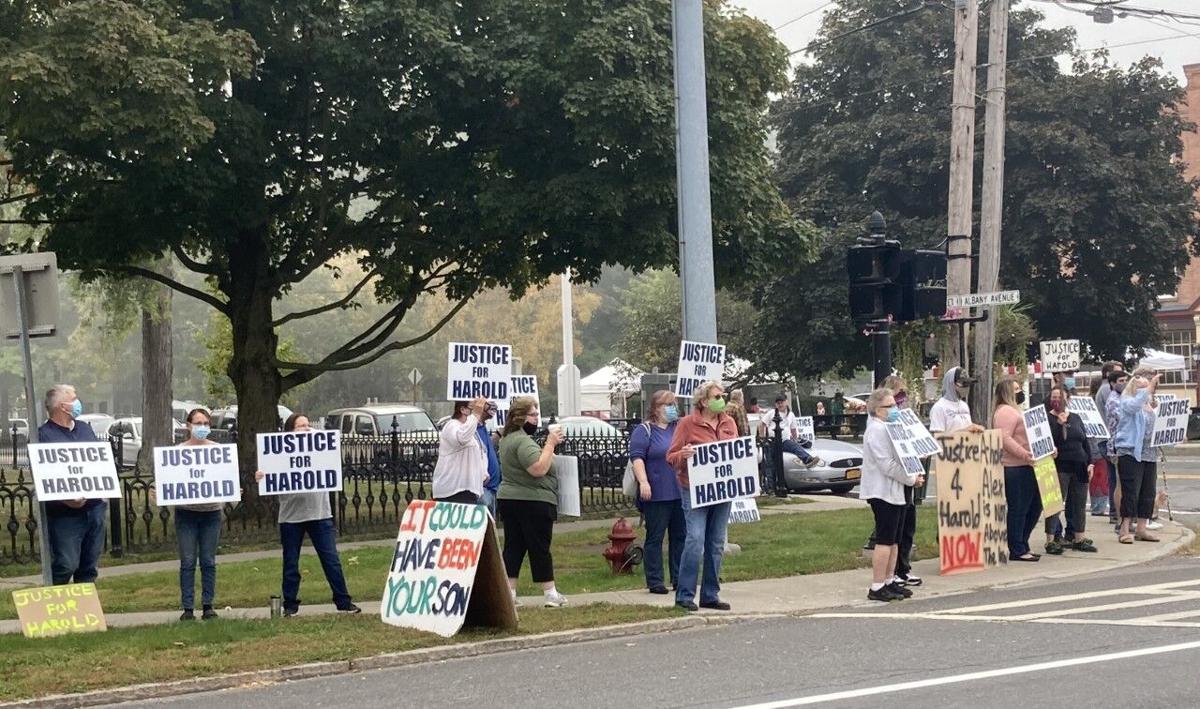 Supporters seek justice for Harold Handy on Saturday in Kinderhook. 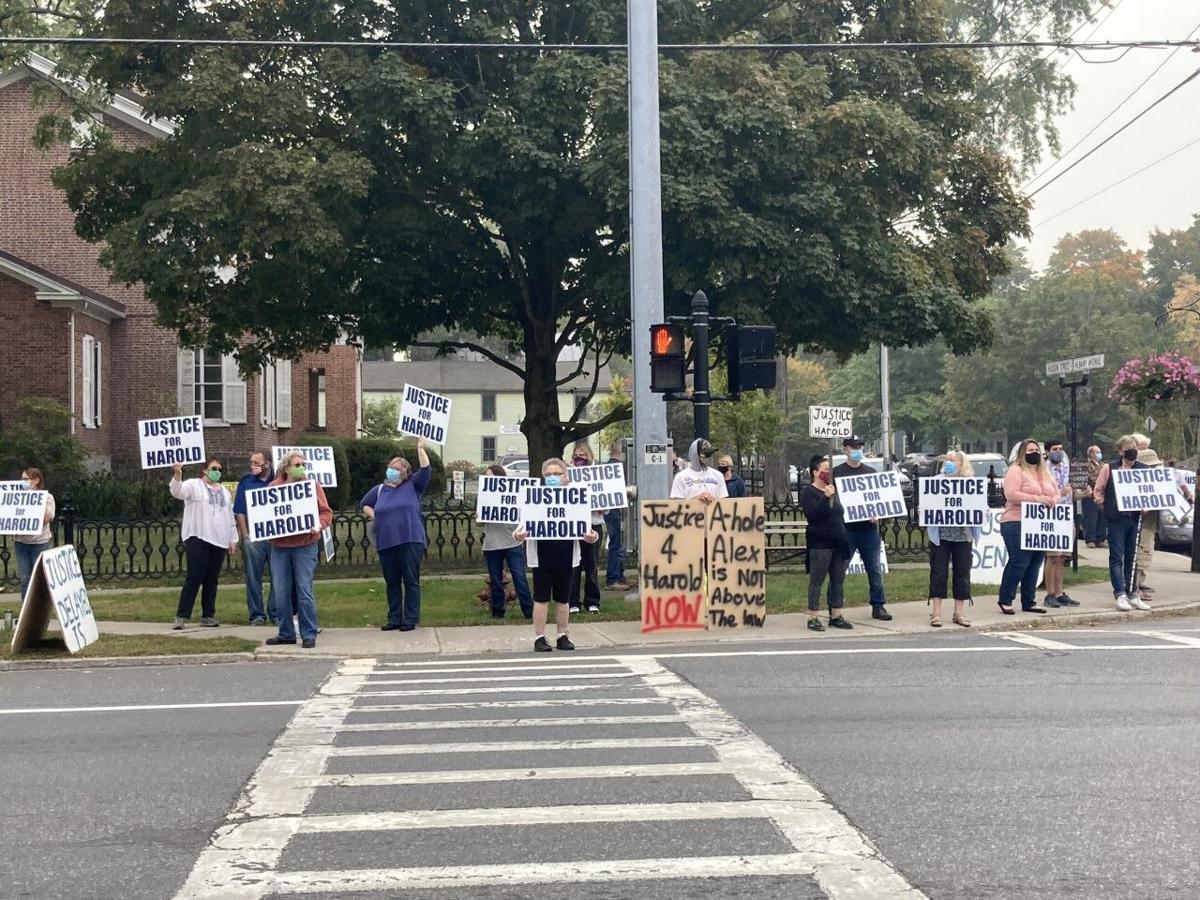 A group of supporters hold signs at the Justice for Harold Rally in Kinderhook on Saturday.
1 of 6

Harold Handy speaks about his son at a Justice For Harold rally Saturday in Kinderhook.

Signs put up just before the Justice for Harold Rally kicked off Saturday in Kinderhook.

About 30 people attended Saturday's rally in support of Harold Handy on Saturday in Kinderhook.

Lee Jamison holds up a sign she made in support of Harold Handy on Saturday in Kinderhook.

Supporters seek justice for Harold Handy on Saturday in Kinderhook.

A group of supporters hold signs at the Justice for Harold Rally in Kinderhook on Saturday.

KINDERHOOK — A rally was held Saturday in support of Harold Handy, the victim of an alleged assault at a sheriff’s deputy’s home in July that left him injured and hospitalized.

About 30 people attended the rally in Kinderhook Village Square in support of Handy, whose alleged assault occurred at a party at the home of Sheriff’s Deputy Kelly Rosenstrach and her husband, ClubLife gym owner Alex Rosenstrach. State police are investigating the incident and no charges have been filed in Handy’s case.

“We expect the individuals involved to be prosecuted to the fullest extent of the law,” said Handy’s father, also named Harold Handy. “A message needs to be sent that, regardless of political connections, contributions to the sheriff’s campaign or if you are employed by the sheriff, that you will not get away with heinous crimes.”

The rally came 11 weeks after the alleged assault. Harold is recovering from his injuries, his father said. Handy family members are limited regarding the release of information in the case because the police investigation is ongoing.

“Justice For Harold is not about an arrest,” Handy’s father said. “It is about the end result of conviction, so we need to stay going strong and keep the pressure on. We know that a jury will be the end result in the decision, but that doesn’t mean we have to stand down and let it go on without anyone speaking out against what happened.”

Dozens of drivers that passed by the protesting group Saturday honked their vehicle's horns in support of Handy. For over an hour friends, family members and other Handy supporters held up signs at the corner of Hudson Street and Route 9 in the village square.

Handy was hospitalized at Albany Medical Center after being treated for 44 minutes at the Rosenstrach’s home at about 1 a.m. July 5 by the Valatie Rescue Squad, Columbia County 911 Director Robert Lopez said July 9.

Rosenstrach was placed on administrative leave from her position as a sheriff’s deputy July 9, four days after the alleged assault took place on her property.

“To hear that one of your favorite people got beat up to the point where he had to be intubated by the EMTs and rushed to Albany Med is pretty shocking,” said Lee Jamison, of Stuyvesant, a rally participant who is a customer of Handy’s auto repair shop. “We expect to see swift justice, but it's been two-and-a-half months. Time passes and why isn’t it being more aggressively investigated?”

While the investigation into the alleged assault is ongoing, the state police reported there are no new details on the case, state police spokeswoman Kristin Lowman said Sept. 25.

“It was three days before the sheriff showed up,” said Christian Svenningsen, of Stuyvesant, a customer of Handy’s auto repair shop who participated at the rally. “Clearly, he had been beaten almost to death; he was literally almost dead and they didn’t come back to investigate for three days. You can’t help also but to feel a bit afraid that if this can go around, am I safe? If I don’t act the way some people think I ought to act, is this going to happen to me? Here I am standing up, does that make me a target?“

The investigation into the alleged assault, which was initially handled by the Columbia County Sheriff’s Office, was taken over by state police in August at the request of Columbia County District Attorney Paul Czajka, state police Public Information Officer Beau Duffy said.

Sheriff David Bartlett said in a statement that he decided July 6, the day after the alleged assault, to turn the Handy case over to state police in an attempt to avoid any perception of a conflict of interest, but state police declined to take it.

Columbia County Sheriff’s Lt. Louis Bray said Sept. 25 there were no new updates about the investigation, but added Rosenstrach continues to be employed by the sheriff’s office, which would not comment on her payroll status.