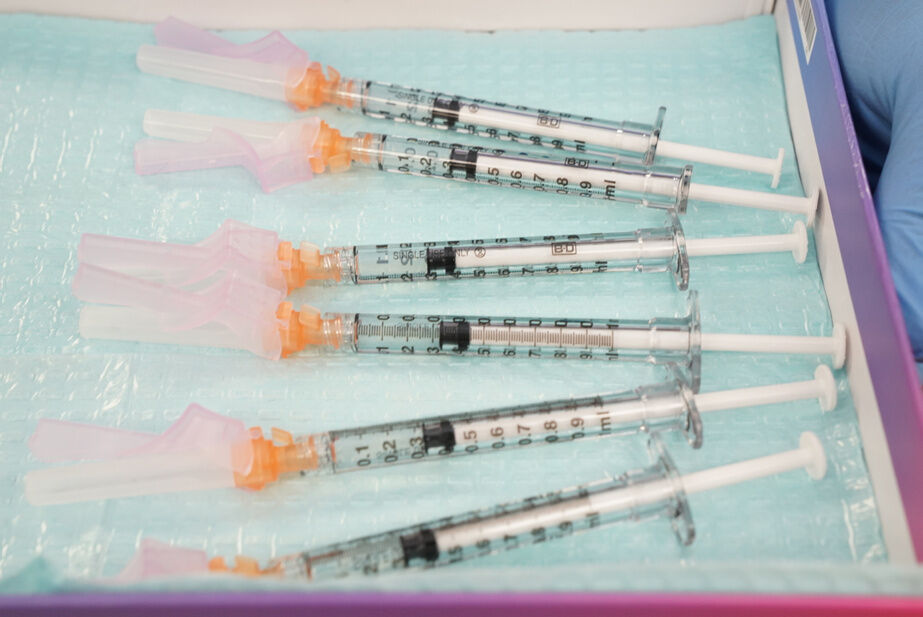 Prepared injections of the COVID-19 vaccine waiting to be administered in a patient’s arm. File photo 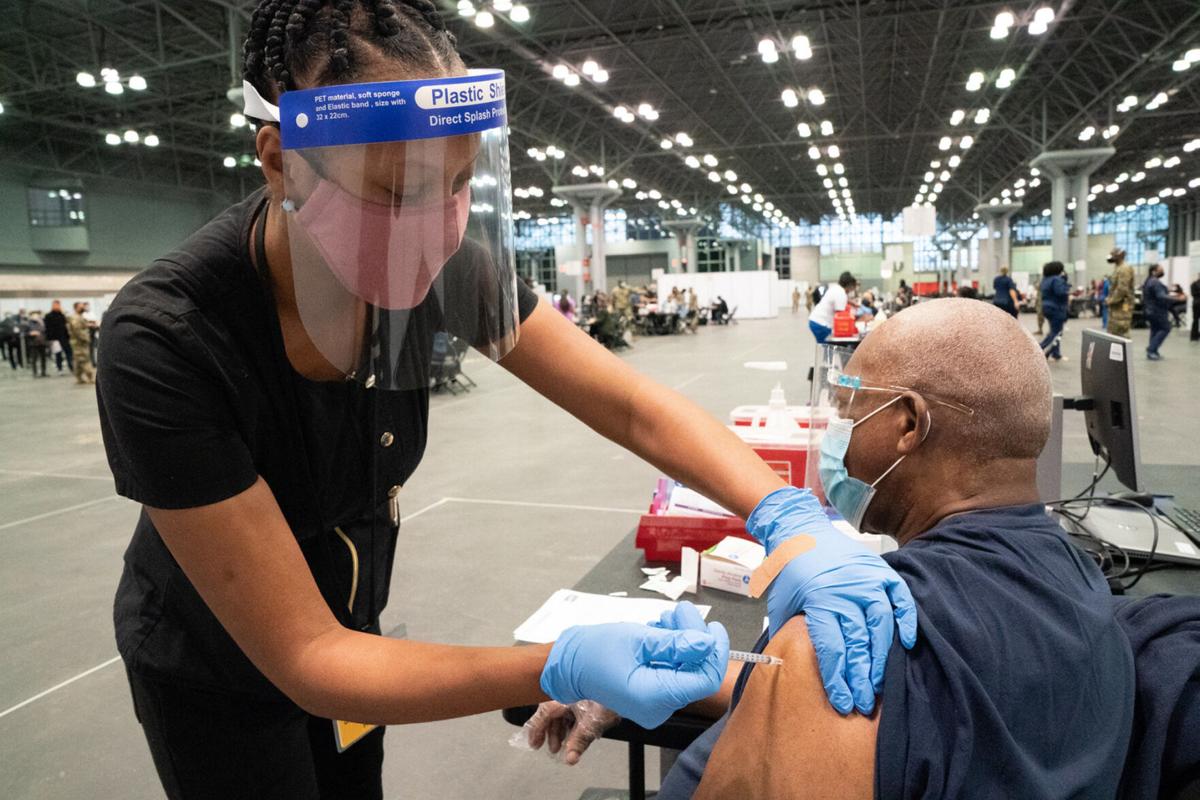 A man is vaccinated against the novel coronavirus at a downstate mass vaccination site last month. Courtesy of Gov. Andrew Cuomo’s Office 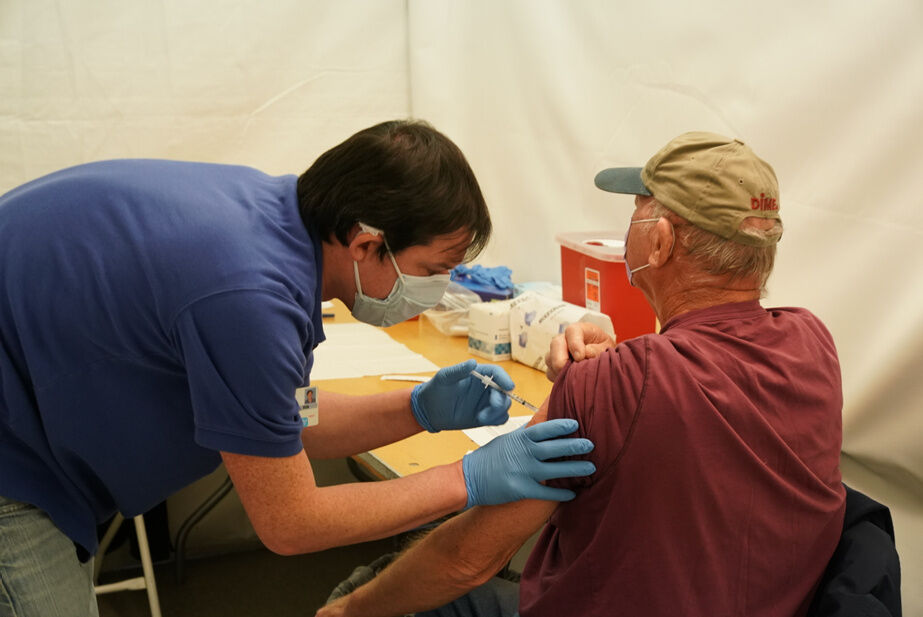 A man gets vaccinated against COVID-19. Courtesy of Gov. Andrew Cuomo's Office

Prepared injections of the COVID-19 vaccine waiting to be administered in a patient’s arm. File photo

A man is vaccinated against the novel coronavirus at a downstate mass vaccination site last month. Courtesy of Gov. Andrew Cuomo’s Office

A man gets vaccinated against COVID-19. Courtesy of Gov. Andrew Cuomo's Office

Nearly all of the state’s coronavirus vaccine doses — up to about 315,000 a week — for the 10th week of distribution are delayed because of ongoing winter storms.

The shipments were scheduled to arrive to localities, pharmacies, federally qualified health centers and other sites between Feb. 12 and 21.

“The snow has had an effect on distribution of vaccines across the country,” Gov. Andrew Cuomo said Friday afternoon during a briefing in the state Capitol in Albany. “...The White House made it clear that the storms affected many of the transport hubs.”

It us unclear how many dosages will be delayed and for how long.

“They’re all individual deliveries,” Cuomo said. “Fed Ex makes many of these deliveries, so we don’t know yet, exactly, how many sites got their Fed Ex distribution and how many didn’t.”

Vaccine appointments remain unaffected for New Yorkers who have a scheduled appointment at a distribution site, including mass state or federal-run locations.

State officials will notify residents immediately if appointments must be rescheduled.

Many state distribution sites have leftover supply from the first nine weeks of allocation.

“We are going to go ahead and plan on our Wednesday scheduled pod,” he said.

“We are looking constantly to see if we’ve had any movement and we haven’t so far,” Mabb said. “So it is entirely possible with the weather that we’ve had that they may be delayed in getting to us and that would be very unfortunate, but we’re still optimistic, we’re still hoping.”

If the county is able to physically have the doses in the building by Thursday or Friday next week, they will try to get as many of the scheduled shots done as possible. The remaining doses will be administered the following week.

“None of our residents are positive at this time,” said corporate administrator and acting administrator at Ghent Rehabilitation and Nursing Center Teresa Creedon. “We’re at the point where we’re testing residents weekly to make sure they are all negative.”

There are 81 residents living at the facility and they have room for up to 120 people, Creedon said. Visitation is not permitted due to COVID restrictions and phones are being put into residents’ rooms to more easily communicate with loved ones, Creedon said.

The facility had its highest numbers of positive cases in mid-January, Creedon said.

“It’s interesting because we see the same correlation in all the counties,” she said. “When Columbia County saw its spike, that’s when we hit our highest, too.”

Ghent Rehabilitation and Nursing Center has had 18 deaths since January, including one staff member. Mabb said one additional resident had died from COVID-19 in November.

The facility has morning reports where teams meet and review the past 24 hours to address any potential issues. She said the facility also has a full-time nurse practitioner to monitor residents.

“One thing we did, right at the beginning of this outbreak, is we used antibiotic infusion therapy,” Creedon said, referring to an aggressive treatment protocol.

About 73% of nursing home residents have been vaccinated to date, Cuomo said Friday.

The Ghent facility has had the majority of its residents vaccinated, including 76 of its 1 residents. Increased numbers of people receiving their second dose of the vaccine have led to a decline in the number of new infections, Creedon said.

“Getting the vaccine has been critical and we’re seeing the results from that as well,” she added.

The Columbia County Department of Health has reported 35, of 41.1%, of the county’s 85 deaths since January.

Cuomo on Friday required all local and county executives to review their area’s distribution sites, including federal and state-run locations. Vaccination hesitancy and overall immunization rates are lower among Black and Hispanic populations.

The governor virtually met with municipal officials this week, asking them to ensure equitable vaccination to all areas and communities — especially communities of color and low-income neighborhoods.

“We’re going to have to constantly adjust. ...These new sites we opened with [Federal Emergency Management Agency] are targeted at this population, but I need the local governments to do this also.”

Cuomo has indicated to county leaders the number of vaccines county health departments will receive will remain the same, Mabb said. Columbia County expects to receive 100 doses this week for people in the 1B category and 100 doses for those with comorbidities.

“The silver lining is we don’t have to cancel on people,” Linger said. “That being said we do have to postpone some of our second doses because those are automatically scheduled when people get their first dose.”

The county is waiting on 400 second doses of the vaccine, he added.

Cuomo reported the federal government announced increases up to 16% in the available doses of the vaccine in the coming weeks.

“That wouldn’t happen until probably the second week of March,” Mabb said. “It’s more doses and we’ll take it, but if we’re getting 200 doses a week, we’ll get 32 doses more. It’s not huge, but I’ll take it.”

Greene County had received 100 doses of the vaccine last week for essential workers.

“The way it’s been explained to us is the Moderna doses come in boxes of 100,” Linger said. “We may end up with the 16% over the course of three or four weeks. So we would get an extra box of 100 per month. It sounds really good, but when you boil it down to how many were really getting, it’s not that many.”