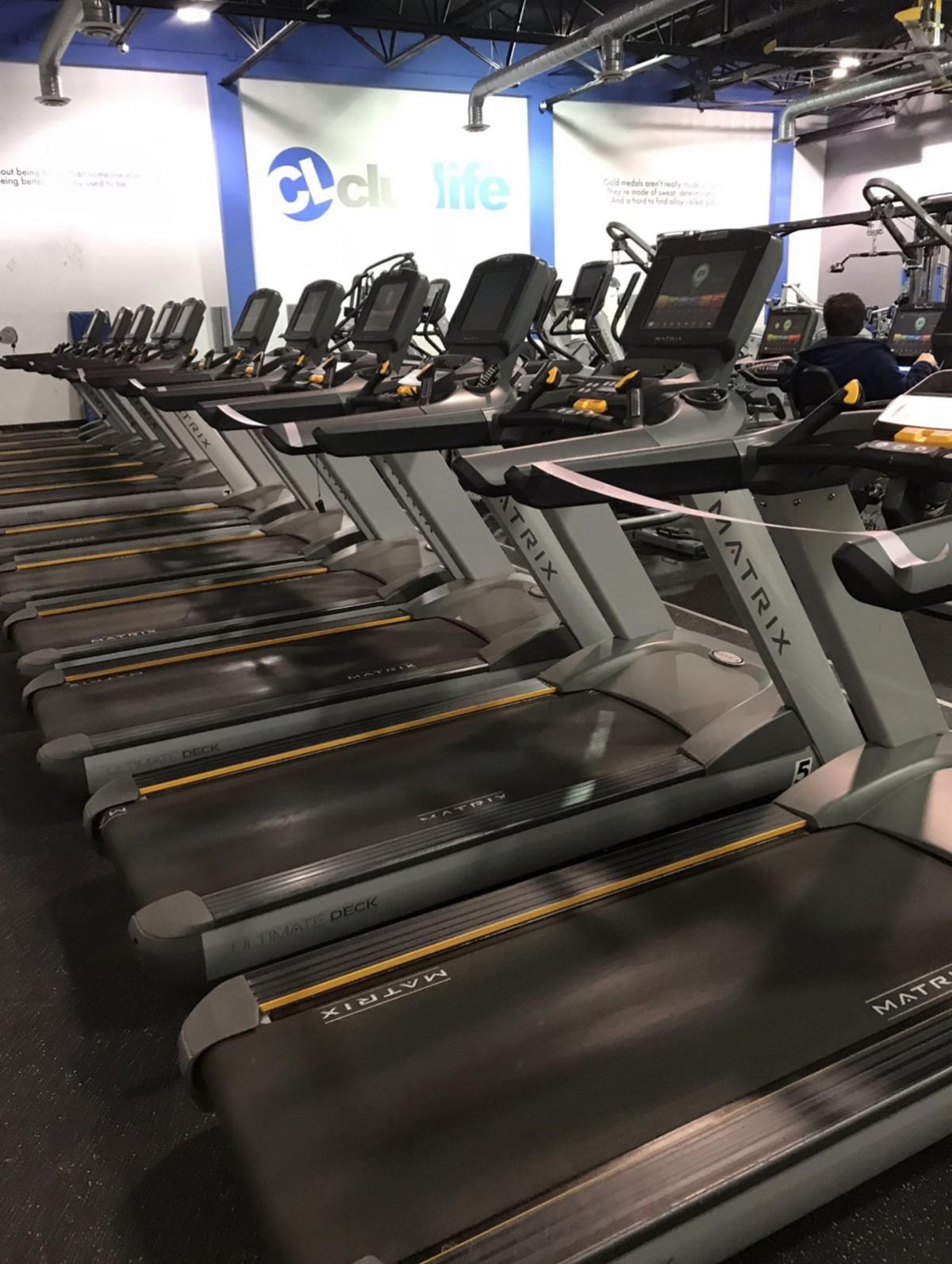 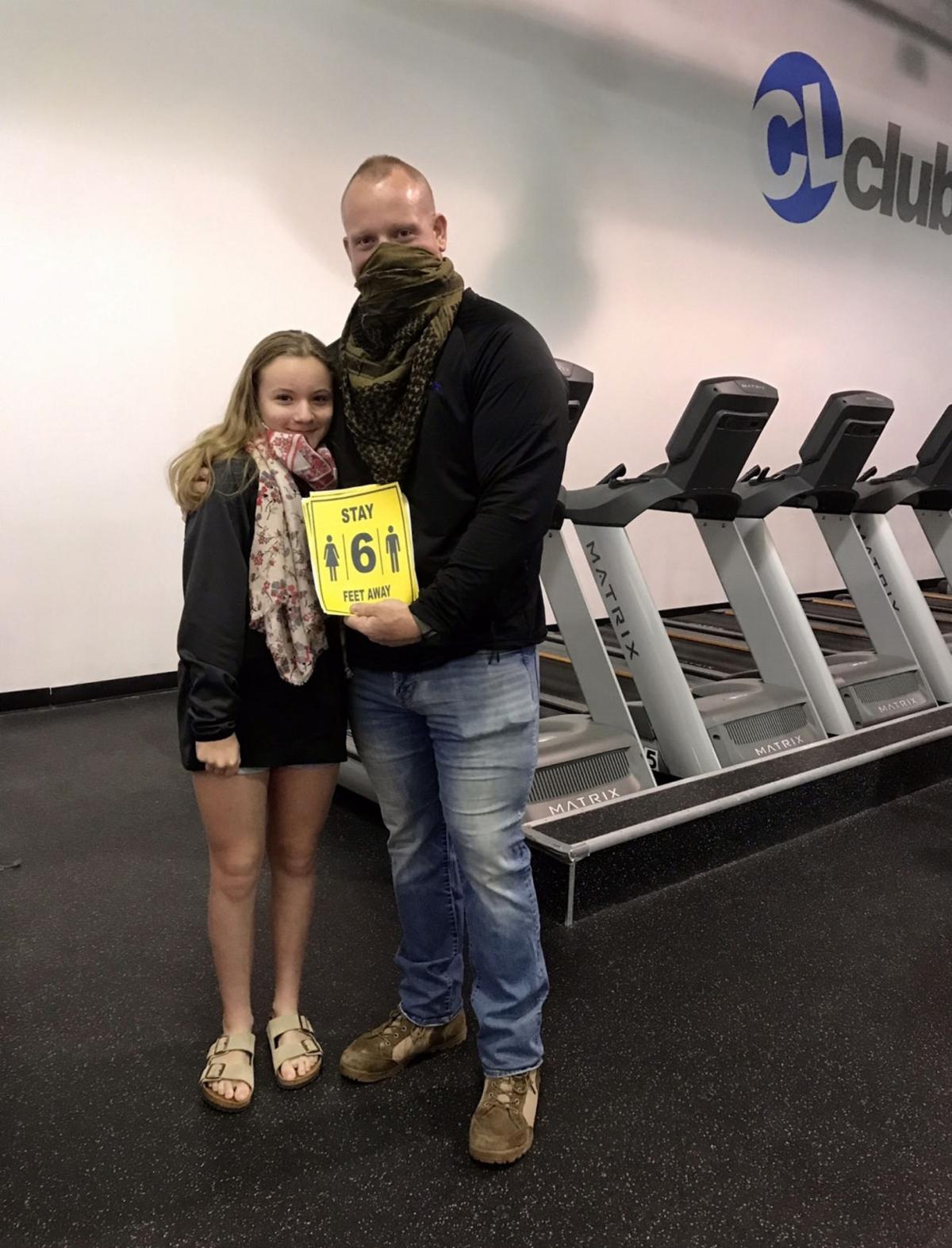 ClubLife Owner Alex Rosenstrach put out the call on Facebook on Saturday after reopening the gym’s concession stand last week. ClubLife offered its selection of shakes free to first responders.

“I can’t even describe to you the overwhelming amount of support we got,” Rosenstrach said.

Approximately 20 people showed up to support Rosenstrach, many of them wearing masks or having them in hand while songs like “God Bless the U.S.A.” and “This Land is Your Land” played over the sound system.

Rosenstrach said businesses could have set up booths outside, but the rain most likely deterred them.

Inside ClubLife, every other machine was taped off to encourage those working out to keep their distance from each other. Rosenstrach’s 6th grade daughter, Ariana, made signs asking people to maintain a six-foot distance.

“We’re just going to ask people not to be next to each other on the machine, wait until there’s at least a machine’s distance between you, something like that,” Rosenstrach said.

He said the staff has always been big on keeping the gym clean, and there are wipes, gloves and hand sanitizer available to guests.

Gov. Andrew Cuomo announced Forward New York, a plan that says once regions meet the criteria to re-open, a four-phase plan can commence.

“There’s no way we could recover from that,” Rosenstrach said. “Businesses can prepare for a rainy day, absolutely, but a random shutdown for three months? That’s unheard of.”

Doug Esmond, from Albany, said this part of the state has seen declining numbers lately, aside from nursing homes, which he said Cuomo has completely mismanaged.

Of the 199 active cases, 154 are from area nursing homes Barnwell, Pine Haven and Livingston Hills.

As a musician, one of Esmond’s regular gigs is at a church, which has moved to online services.

“It’s not church,” Esmond said. “It’s not OK. It’s not congregating together, it’s isolating. What’s church about?” Esmond said when the closures started happening, he had older congregation members in tears, heartbroken over having their social circles suspended indefinitely.

He has been trying to teach music lessons online, but is looking forward to summer shows he usually plays for in Washington Park.

Dennis Connelly, an independent jeweler from Albany, said he knows two people who had COVID-19 and have passed away.

“People are hurting,” Connelly said. “New York state is not the same as New York City ... It’s different upstate. How can I not be essential if I’m the breadwinner in my family?”

Connelly, whose luxury jewelry business is in Phase Three of the reopening plan, said if businesses can abide by social distancing, they should be able to open. He also noted that the state is not getting nearly as much sales tax with so many businesses closed.

“Why are all the big-box stores allowed to be open, Wal-Mart, Home Depot, Lowe’s?” Connelly asked. “The country is run on small business, over 50% of our GDP.”

“You can’t. People want to touch it, feel it, see it. It’s emotion,” Connelly said. “Your hands are tied to make a living.”

Connelly has considered opening by appointment only or using Plexiglas shields like some grocery stores have.

“It might not sound humane, but the reality is that the percentage of deaths in severe hospital respirators is all going down,” Connelly said. “We can be smart and open again.”

ClubLife members David Newkirk and his nephew Jake Kirkpatrick, competitive powerlifters from Nassau, have been working out in a garage, which is also inhabited by chickens.

“I think the people that are healthy should be able to get out and do what they have to do,” Newkirk said. “It becomes an emotional addiction, you have to do it. You start going crazy sitting at home doing nothing.”

“Sometimes you need a break, but it gets to the point where you want to continue to be healthy,” Kirkpatrick said, adding that Rosenstrach has become family over the years.

Seth Gazzola, of Claverack, said he’s ready to safely get back to work.

“It’s important to stay clean... but at some point, this whole people sitting around doing nothing, it’s unsustainable,” Gazzola said.

Dan Ronsani, of Claverack, said engaging in physical activity would allow immune systems to be boosted, even just as something to look forward to in the day.

“The government doesn’t have the right to tell an individual who’s being safe what their decision is,” Ronsani said.

Gazzola agreed, saying if employees accept the risk by going back to work and the customer accepts the risk by visiting, it should be their decision.

Although he had heard of complaints being made, Rosenstrach said the Sheriff’s Office had not reached out to him as of noon Monday about the gym reopening.

No enforcement agencies were present to investigate the rally, and the Sheriff’s Department and the state police could not be reached for comment.

Abby Hoover is a reporter for the Register-Star. Contact her at ahoover@registerstar.com.

OK. I'll be the antagonist. Albeit, people have the right to socialize, engage in business, and drive off a cliff. Why are places like Home Depot, Lowes or Walmart allowed to stay open and not places like a gym? Seriously? I understand that running and operating a gym business is a livelihood, but can I get fresh and canned food there? Toilet paper? Parts to fix my broken toilet? Also, the coronavirus is not the flu; its far worse. That daughter could end up with a fierce side effect. And, I hope no one had it in its asymptomatic form when they were singing the National Anthem. Because, regardless of whether they were social distancing, not wearing a mask will allow the virus into the surrounding air via aerosol from our mouths. And, according to a study published in the NE Journal of Medicine, it stays suspended in the air for 1/2 hr. Downplaying this pandemic, because it hasn't seriously hit a given community as hard as others, is irresponsible, thoughtless, selfish and infringe on the rights of life of those who don't want to be exposed or have their family members exposed. Fear is the wrong term. It's called common sense and maturity, which is not always what we want to face, experience or deal with. I will be forced to go into my place of employment soon, and be exposed to central air, and hundreds of people. I hope I, or any of my family, don't catch the virus because some "activist" decided to be carefree I hope none of you catch it. Stay safe.